WRC- Home Hero Neuville Surges To The Top In Ypres 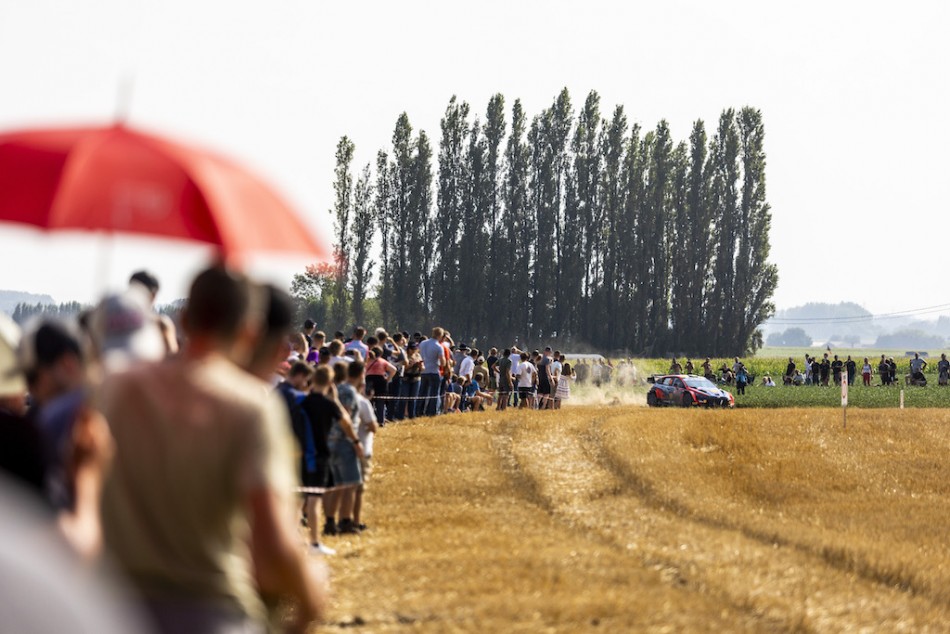 Thierry Neuville produced a plucky comeback drive to head up a Hyundai Motorsport 1-2 at the completion of the opening leg of Ypres Rally Belgium, round nine of the 2022 FIA World Rally Championship.

Just 2.5s separated Neuville and team-mate Ott Tänak at the end of an action-packed Friday on challenging asphalt lanes in the Flanders region in the north of the country.

Neuville’s day got off to a difficult start when he dropped more than 10s with a costly overshoot on the first stage and the situation showed signs of worsening as he fought with car set-up issues throughout the morning.

The Belgian driver complained the differential settings on his Hyundai i20 N Rally1 were causing the brakes to lock up under braking, and he trailed Elfyn Evans by 8.8s in third overall at the mid-leg halt.

After making several set-up tweaks, Neuville emerged from service with fresh impetus. With newfound confidence in the car, he and co-driver Martijn Wydaeghe stormed to fastest times on all four of the afternoon’s stages – leapfrogging Tänak and Evans in the process.

“It’s been a whole different afternoon in terms of the handling with the car,” Neuville explained. “I am so much happier now. I feel like I have seen some areas where we can improve and find a bit more speed, but overall we can be very happy with our afternoon.

“Our weather team has done an amazing job with some very precise information and I have felt confident to trust their predictions. That’s very important on a day like this,” he added.

Aside from a few set-up struggles of his own, Tänak’s day went without drama. He never strayed outside the top three stage times all day and held the runner-up spot from the second test onwards.

The same couldn’t be said for Toyota star Evans, who led for most of the leg after team-mate and championship leader Kalle Rovanperä rolled into retirement on SS2.

Welshman Evans was forced to bolt a single wet weather tyre onto his Yaris after damaging one of his slicks on SS6. Reduced performance on the dry roads allowed Neuville into the lead and a 10s time penalty for a late check-in compounded his frustrations.

“We lost one of our slick tyres and had to use a rain tyre, which was obviously not ideal in these conditions,” he explained. “The penalty was no big issue – just a minor error – but one in four years is not bad.”

While the leading trio carried packages more suited to dry conditions, the rest of the field dropped time with combinations taken in the hope of wet weather.

Espekka Lappi joked he was “leading the class for the wrong tyres” and brought his Yaris home for the day 23.6s back from the podium. He has 18.8s in hand over M-Sport Ford drivr Craig Breen, who holds fifth overall despite an overshoot early in the day.

Breen’s Puma colleague Gus Greensmith ended more than half a minute back in sixth ahead of Oliver Solberg, who battled gearbox issues on his Hyundai.

Adrien Fourmaux – also driving a Puma – had been challenging for a top-four position but was caught in a localised rain shower on SS4. He plummeted down the order and finished the day in eighth overall, while WRC2 frontrunners Stéphane Lefebvre and Andreas Mikkelsen completed the top 10.

Takamoto Katsuta languished in 18th overall after haemorrhaging time with a transmission problem in the morning, the Japanese relying on electric power only to complete SS3. Meanwhile, his Toyota team expects to repair Rovanperä’s car overnight so that the Finn can rejoin the action tomorrow (Saturday).

Luxembourg’s Grégoire Munster is fourth and the top WRC2 Junior driver in a Hyundai i20 N Rally2 followed by Briton Chris Ingram and Belgian Sébastien Bedoret.

Elfyn Evans held off Ott Tänak at the top of the Ypres Rally Belgium leaderboard after an action-packed opening loop in which FIA World Rally Championship leader Kalle Rovanperä crashed out of contention.

Rovanperä understeered into a drainage ditch on the outside of a left-hand corner which pitched the car into a spectacular barrel roll. While he and co-driver Jonne Halttunen emerged unscathed, their hopes of sealing the WRC title this week are over.

Evans, armed with a slight advantage obtained during the opener, was left duelling with Hyundai Motorsport’s Tänak. Neither felt 100 per cent comfortable on the fast and narrow Flanders farm lanes and there was little to split the pair.

Tänak was aided by a cleaner surface from first on the road and whittled his rival’s advantage down to just six-tenths of a second by the penultimate test. Evans then responded by shading the Estonian at Langemark to carry a 2.3s buffer into the afternoon’s loop of four repeated stages.

“It was pretty okay to be honest,” Evans said of his Langemark charge. “We were finding a better balance between being clean and pushing.

“I am happy with my driving, but of course this is only very early and there is still a long way to go,” he added.

Local favourite Thierry Neuville completed the top three 6.5s further back after a shaky start in his Hyundai i20 N Rally1. An overshoot on SS1 cost the Belgian around 10 seconds and, despite winning a stage, he lacked confidence.

“It’s so different compared to last year and I am struggling so much to find the confidence,” Neuville explained. “I don’t feel good in the car at the moment – I have a lot of diff openings and the wheels are locking under braking.”