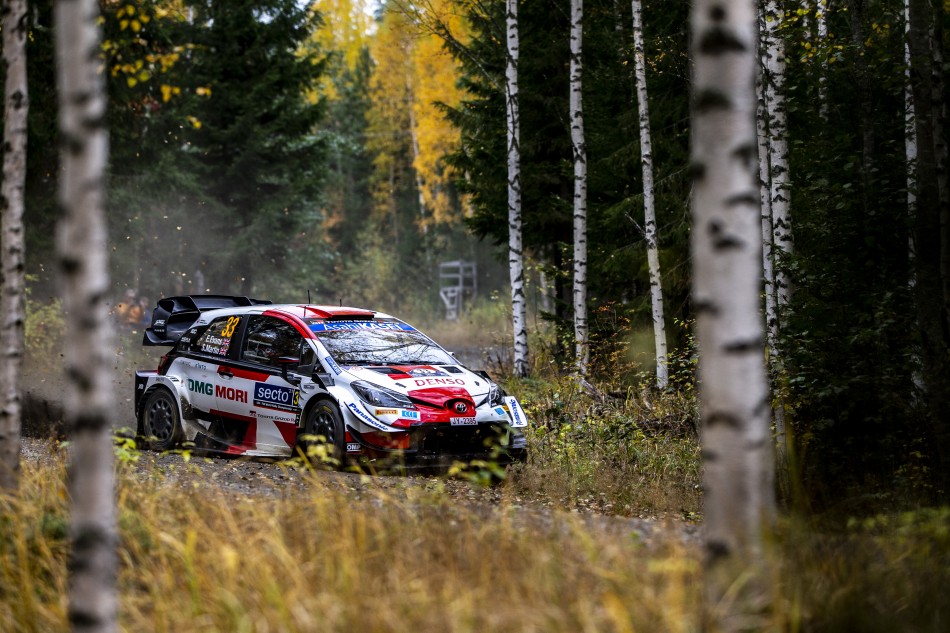 Elfyn Evans forced his way into the lead of Secto Rally Finland with a clean sweep of four speed test victories on Saturday morning.

After soaring from fifth to third with a dominant drive in the dark on Friday night’s closing test, Evans maintained his blistering speed across the quartet of forest stages to overhaul Craig Breen and Ott Tänak.

After winning the opening Kakaristo-Hassi test in his Toyota Yaris, a second fastest time in Päijälä propelled the Welshman into the lead. Two more masterful performances in Arvaja and Patajoki stretched his advantage over Breen to 5.6sec at Saturday’s midpoint.

Breen, who stole the overnight advantage from Tänak yesterday, fended off his Hyundai i20 team-mate this morning. The Irishman posted top three times on every stage to head the Estonian by 4.1sec but he was in awe of Evans.

Tänak, too, had no answer to the Toyota man. The Estonian acknowledged he was at his limit on the rollercoaster roads.

Kalle Rovanperä relegated Esapekka Lappi from fourth in Kakaristo-Hassi. But that mattered little when the young Finn drifted wide in a left bend in Patajoki before smashing into a pile of earth and retiring with damage to the front of his Yaris.

Lappi trailed Tänak by 23.6sec in his Yaris, the Finn finding the tricky grip levels hard to manage, but he had 20.1sec in hand over Thierry Neuville, lying fifth in another i20.

Belgian Neuville struggled for rhythm and said he trying to strike a balance between attacking and keeping his car on the road. He was 12.9sec up on lacklustre championship leader Sébastien Ogier, who again struggled for confidence and speed.

Takamoto Katsuta retired from eighth in Päijälä when he landed awkwardly after a jump and an impact launched his Toyota Yaris into the undergrowth. With damage to the right rear, the Japanese driver went no further.