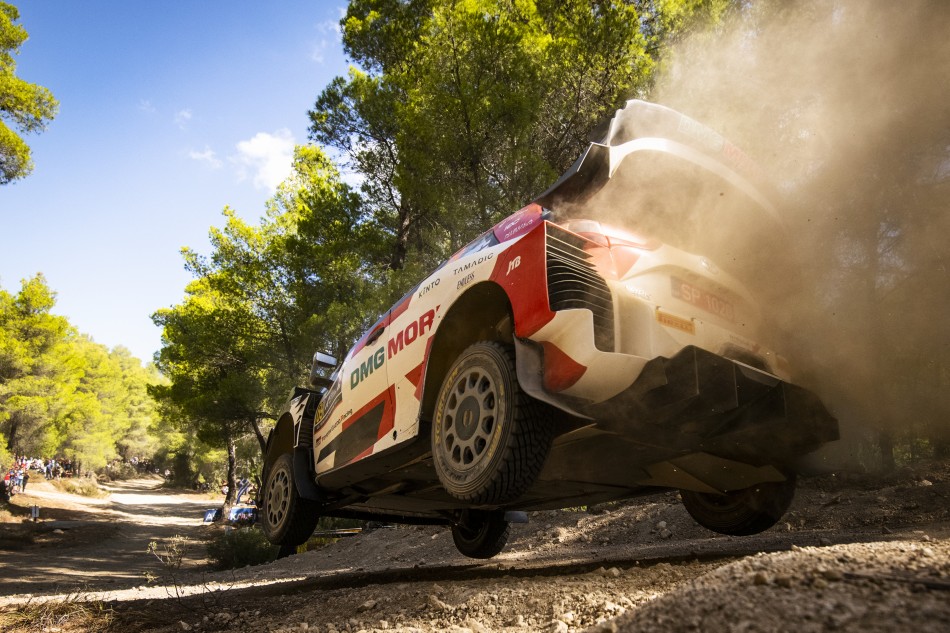 Twenty-year-old Kalle Rovanperä landed his second FIA World Rally Championship event win on Sunday afternoon after dominating Acropolis Rally Greece.
The Finn led for virtually the entire four-day fixture on rocky mountain roads in central Greece to win by 42.1sec in a Toyota Yaris. The victory came two months after he became the youngest WRC winner in history in Estonia.
Ott Tänak finished second in a Hyundai i20 after a late scare, with championship leader Sébastien Ogier driving a measured rally to finish third in another Yaris, a further 29.2sec back. The Frenchman extended his points lead to 44 with three rounds remaining.
Rain in the run-up made conditions unpredictable on the rally’s WRC return after an eight-year absence. Rugged gravel tracks were interspersed with muddy sections that failed to dry, ensuring unpredictable driving and difficult tyre choices.
Rovanperä took the lead in the third speed test on Friday morning and was never headed. He, Tänak and Ogier were covered by 3.9sec on Friday night but a blistering turn of speed on Saturday delivered four straight stage wins and carried him almost 40sec clear.
He managed his advantage through the remaining stages and sealed a perfect weekend with maximum bonus points for winning the Wolf Power Stage. Rovanperä and Ogier increased Toyota Gazoo Racing’s lead at the top of the manufacturers’ standings to 57 points over Hyundai Motorsport.
Tänak never felt comfortable but was glad to accept second after final day electrical issues. His car then refused to fire up ahead of the closing stage. It eventually started, with smoke clearly visible, and he completed the test with no further dramas.
With closest title rivals Thierry Neuville and Elfyn Evans plunging down the order after first day problems, Ogier was content with a risk-free approach that further strengthened his bid to secure an eighth WRC title.
Dani Sordo was almost two minutes further back in fourth in another i20, the Spaniard frustrated at not being on podium pace. He had nearly three minutes in hand over Gus Greensmith, who moved ahead of Ford Fiesta team-mate Adrien Fourmaux.
Fourmaux incurred a three-minute penalty when his car would not start before Sunday’s opening stage. A spark plug change solved the issue and although he moved ahead of Evans in the penultimate stage, a final test spin dropped him behind again to seventh.
Evans salvaged sixth after opening day transmission troubles in his Yaris, with Neuville recovering to eighth after losing time with damaged power steering.
FIA WRC2 winner Andreas Mikkelsen and Marco Bulacia, both driving a Toksport Škoda Fabia Evo completed the leaderboard in ninth and 10th.
Starting the final day with a 19.1sec advantage over his closest challenger, Rossel showed his rivals a clean pair of heels and went fastest on both Tarzan 1 and Pyrgos to extend his margin.
His rally very nearly unravelled when he hit something in the closing Wolf Power Stage. The impact caused driveshaft and steering damage and Rossel had to make running repairs to his Citroën C3 Rally2 after the stop line.
Amazingly, he made it back to Lamia with a 21.3sec lead still intact.
The result marked Rossel’s fourth victory of the year and he moved 50 points clear of rival Kajetan Kajetanowicz in the standings.
The championship journeys to Finland next month for another classic WRC fixture at the fastest round in the calendar. Secto Automotive Rally Finland is based in Jyväskylä on 1 – 3 October.
The unofficial results and classification can be consulted here.