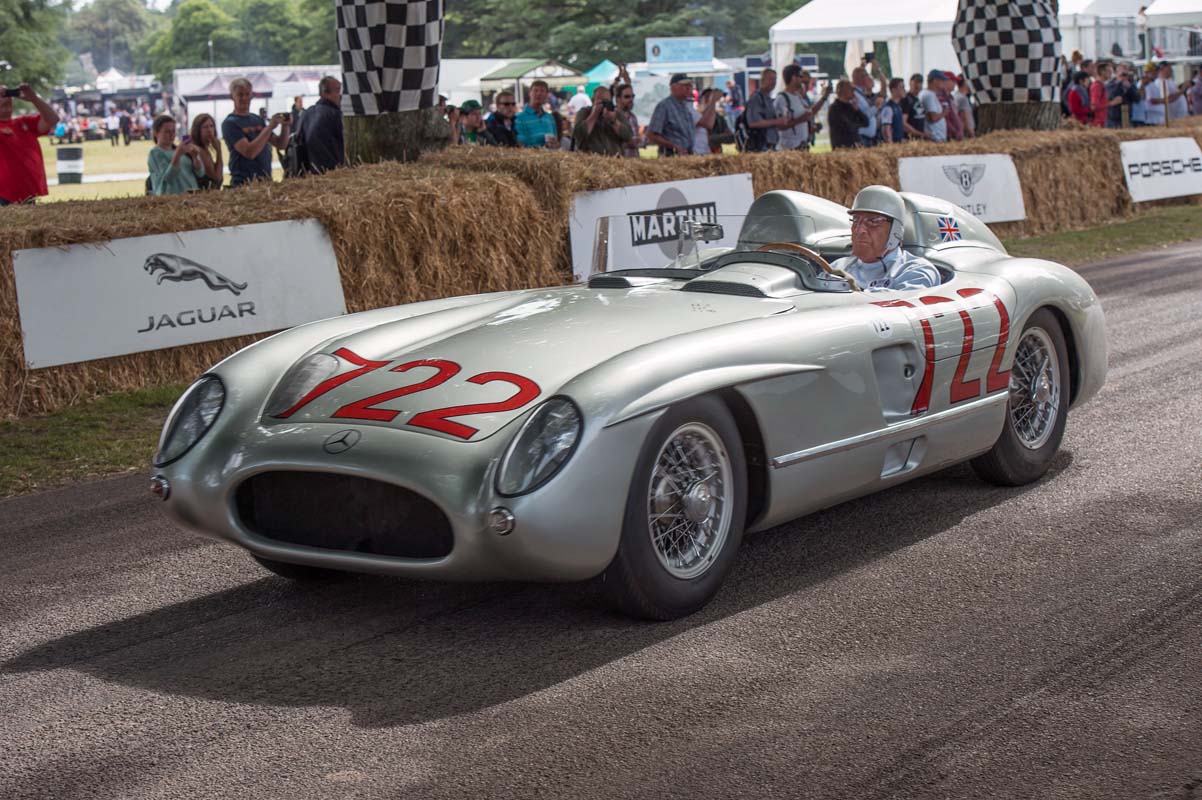 Goodwood’s cricket ground will feature the Mercedes-Benz 300 SLR “722” (W 196 S) driven by the British racing driver, who died in 2020, as the focal point of a memorial commissioned by the Duke of Richmond and created by designer and artist Andy Dance.

“In honour of the great man and outstanding racing driver Sir Stirling Moss, Mercedes-Benz Classic will present the legendary racing sports car in which Stirling Moss celebrated his greatest success as our works driver at the 1955 Mille Miglia in a dignified setting at this, the ‘largest automotive garden party in the world’,” explained Christian Boucke, Head of Mercedes-Benz Classic. Sir Stirling Moss passed away in London on 12 April 2020 at the age of 90.

300 SLR “722” as the focal point of the memorial
The memorial to Sir Stirling Moss on the cricket ground at Goodwood House will showcase the original 300 SLR “722” on a pedestal inside a glass cube. The winning car from that year will be surrounded by obelisks commissioned by the Duke of Richmond from designer and artist Andy Dance. Monitor screens will be integrated in the obelisks showing videos recalling the life of Sir Stirling Moss. Historic film footage from Mercedes-Benz will remind us of, amongst other things, the outstanding role played by the English racing driver for the Stuttgart brand in the 1955 motor racing season.

The digital book of condolences, which Mercedes-Benz Classic has created in memory of Sir Stirling Moss, will also be displayed on the screens. The interactive document can be accessed at www.mercedes-benz.com/stirlingmoss and mb4.me/stirlingmoss. The QR code that accesses the book of condolences directly will be on display at the Festival of Speed at Goodwood House.

Legendary motor racing season of 1955
In the Mercedes-Benz 300 SLR with the starting number 722, Moss and his co-driver Denis Jenkinson won the 1955 Mille Miglia with a record average speed of 157.65 km/h. Stirling Moss’s victories in the 300 SLR were decisive in Mercedes-Benz’s winning the World Sports Car Championship in 1955. That year, Moss also competed for Mercedes-Benz in Formula One in the single-seater W 196 R and finished runner-up behind his team-mate Juan-Manuel Fangio.

Mercedes-Benz has been present at Goodwood for many years with its Silver Arrows and other sporty vehicles from the brand’s history. Drivers such as Lewis Hamilton, Hans Herrmann, Jochen Mass and Jackie Stewart have been known to put the cars through their paces at that venue. The first Festival of Speed took place in 1993 with around 25,000 visitors at the Duke of Richmond’s country estate in Sussex (England). In the meantime, this international show in the grounds of Goodwood House has developed into the largest motorsport event in Great Britain with up to 200,000 visitors over four days.

“In 1993, my original idea was to generate the atmosphere of a proper garden party and then bring together valuable historic cars and their corresponding drivers from the different generations,” explained the Duke of Richmond, organiser of the Festival of Speed. The grandfather of the present Duke, “Freddie” Richmond, organised a hill climb outside Goodwood House as early as 1936 and converted a military airfield into the Goodwood race track in 1948, where the Goodwood Revival has been held since 1997.

Stirling Moss and Goodwood
Goodwood had a special significance for long-time Mercedes-Benz Brand Ambassador Stirling Moss: this was where he celebrated his first victory in his first race in 1948. After a serious accident in April 1962 on the fast circuit, this was also the place where he ended his career. “Stirling and his wife Susie were such an important part of the Goodwood family for so many years,” the Duke of Richmond paid tribute. “We hope that fans at our events around the world will join us in celebrating his racing career and bidding farewell to ‘Mr Goodwood’ in 2021. Stirling’s supreme skill and love for his sport will continue to be remembered at Goodwood for many years to come.”

The car shown by Mercedes-Benz Classic at the Goodwood Festival of Speed in 2021
Mercedes-Benz 300 SLR racing sports car “722” (W 196 S, 1955)
Mercedes-Benz developed the 300 SLR (W 196 S) for the 1955 World Sportscar Championship. It was based on the successful W 196 R Formula One racing car. The main difference besides the body was the engine: the racing car did not have to comply with the Formula One displacement limit and was powered by a three-litre version of the eight-cylinder inline engine, which ran on regular premium-grade petrol rather than special racing fuel. Its high performance potential and unrivalled durability as well as reliability made the 300 SLR far superior to its competitors in 1955. Stirling Moss and Denis Jenkinson, in the car bearing starting number 772, took first place in the one-two win in the Mille Miglia. There were more double victories in the Eifel race, the Swedish Grand Prix and the Targa Florio (Sicily), plus a triple victory in the Tourist Trophy in Ireland, and, finally, victory in the World Sports Car Championship. 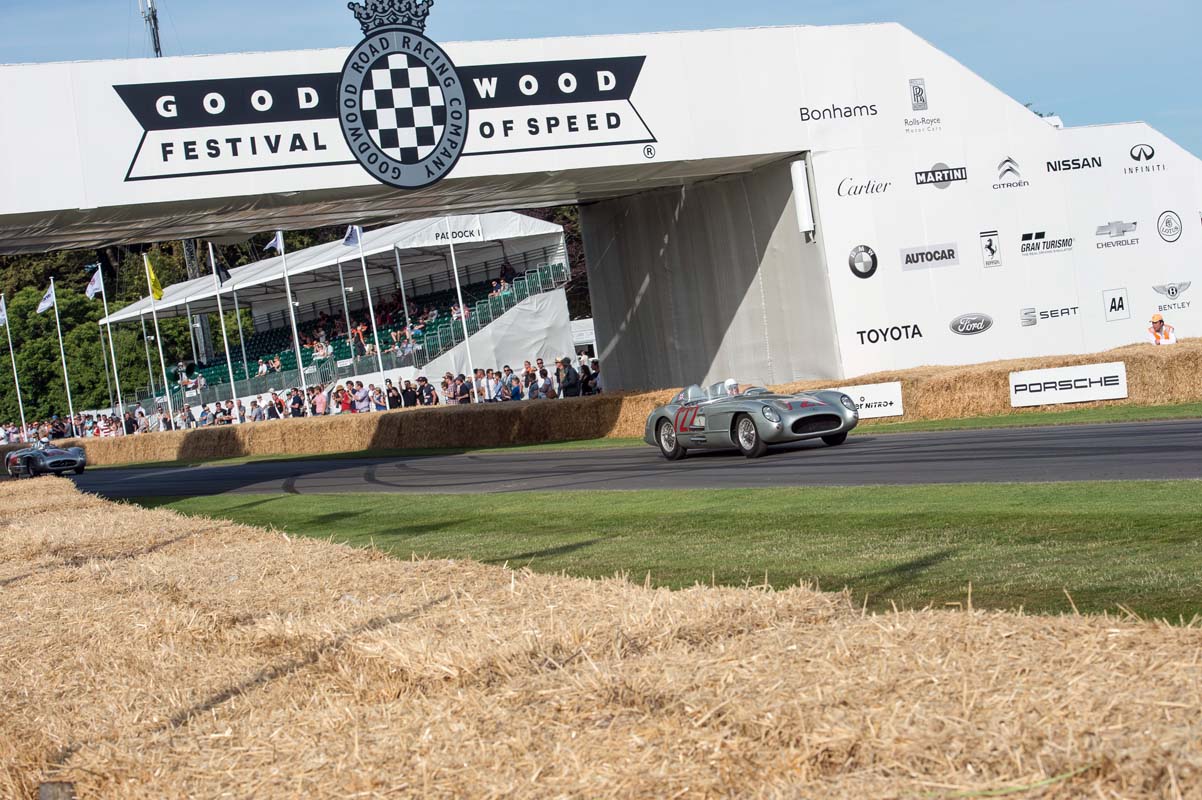 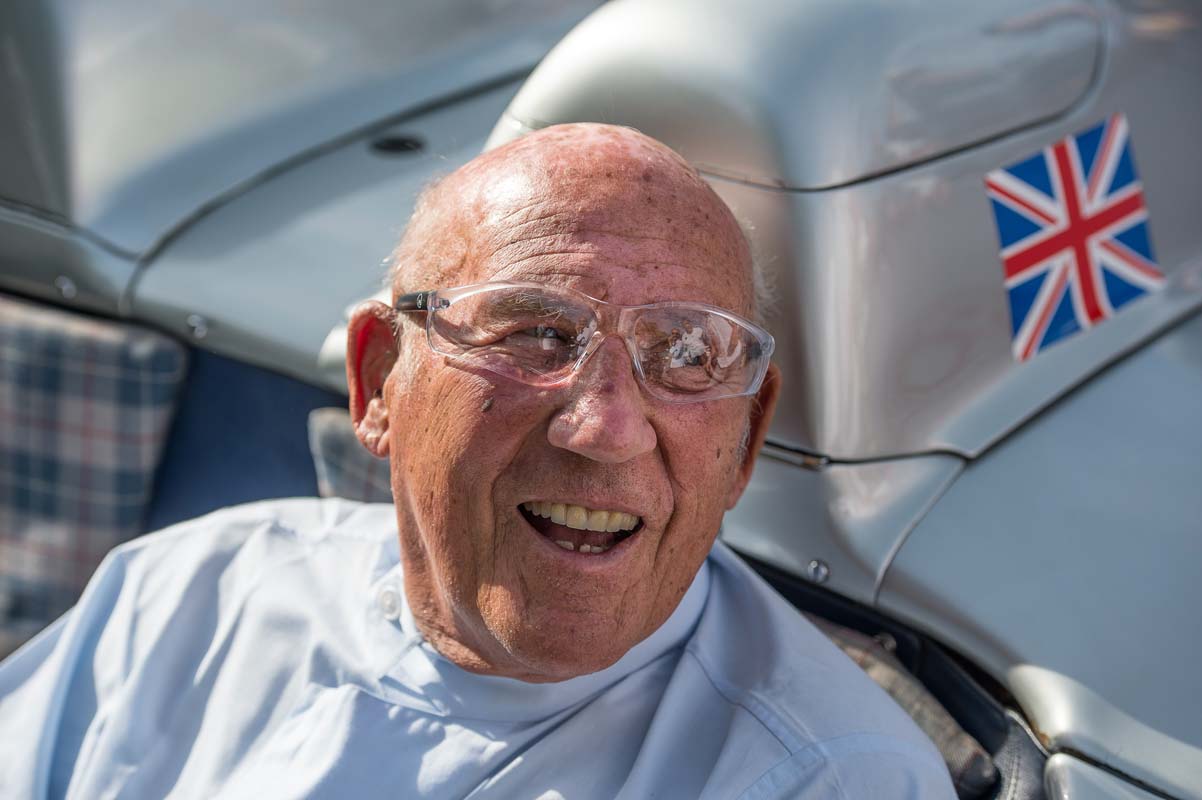 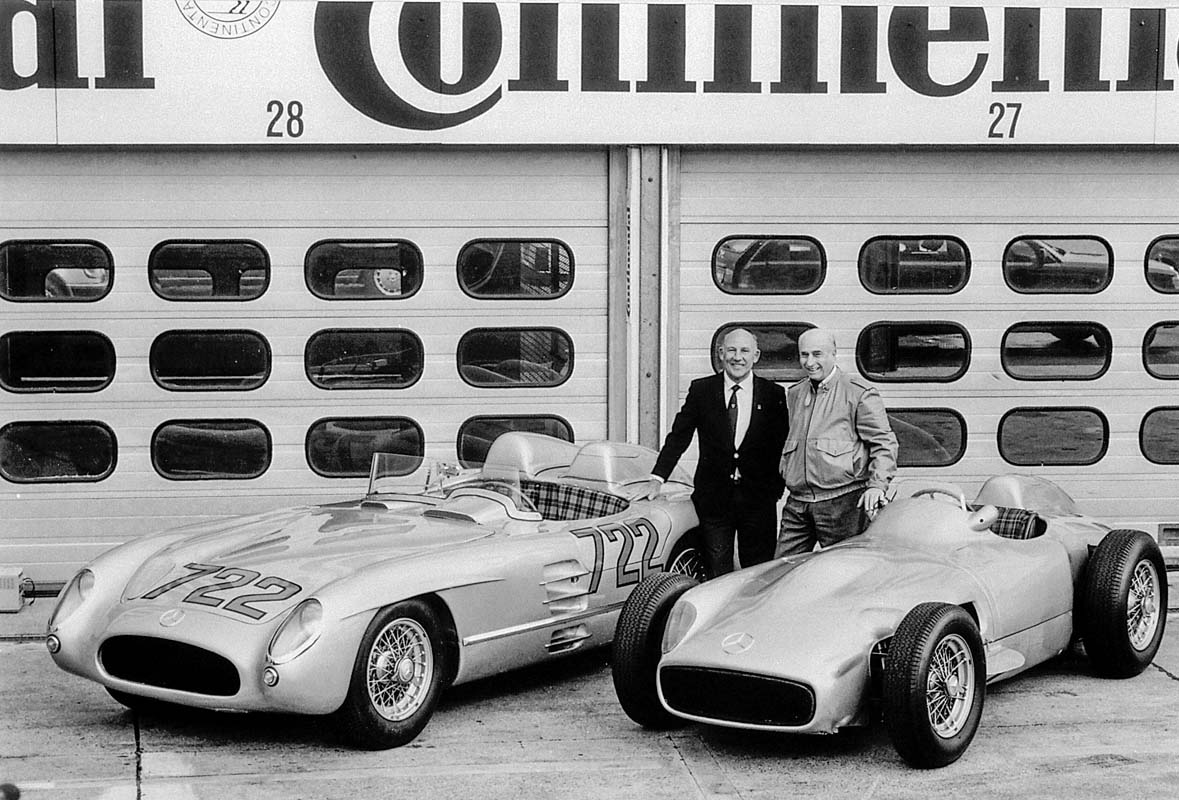 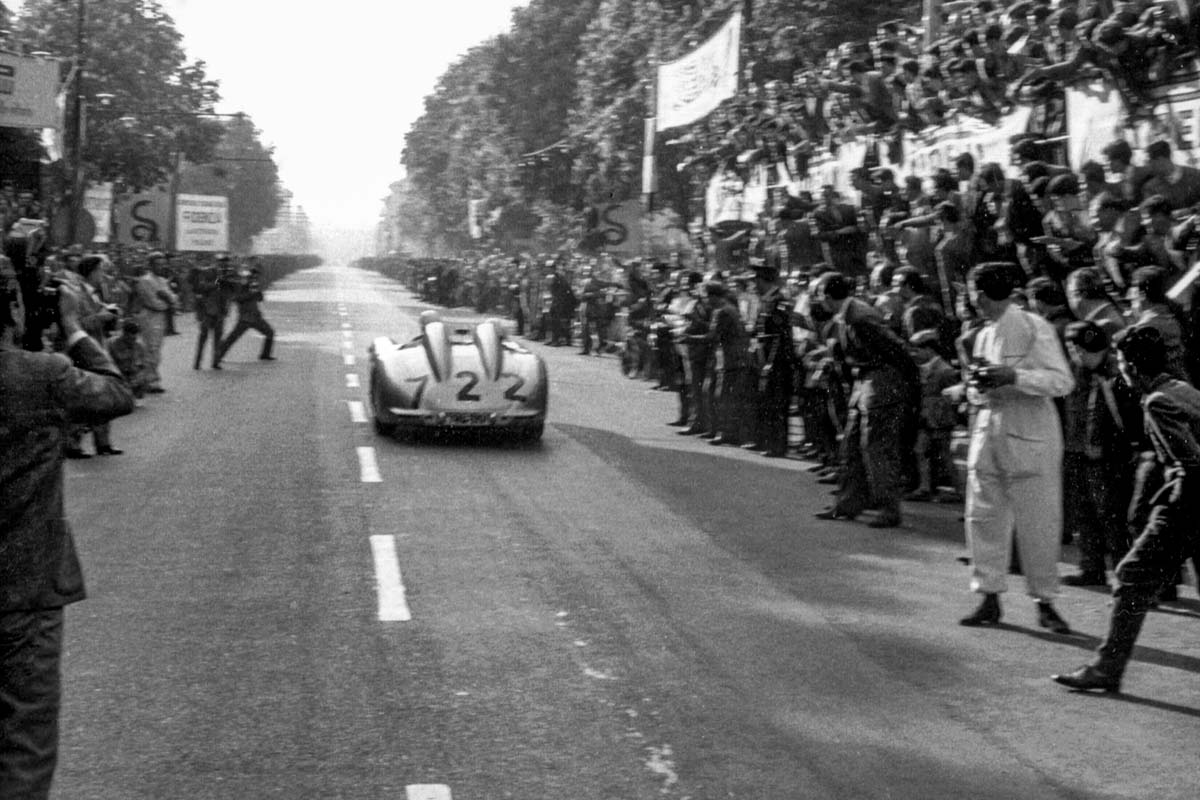 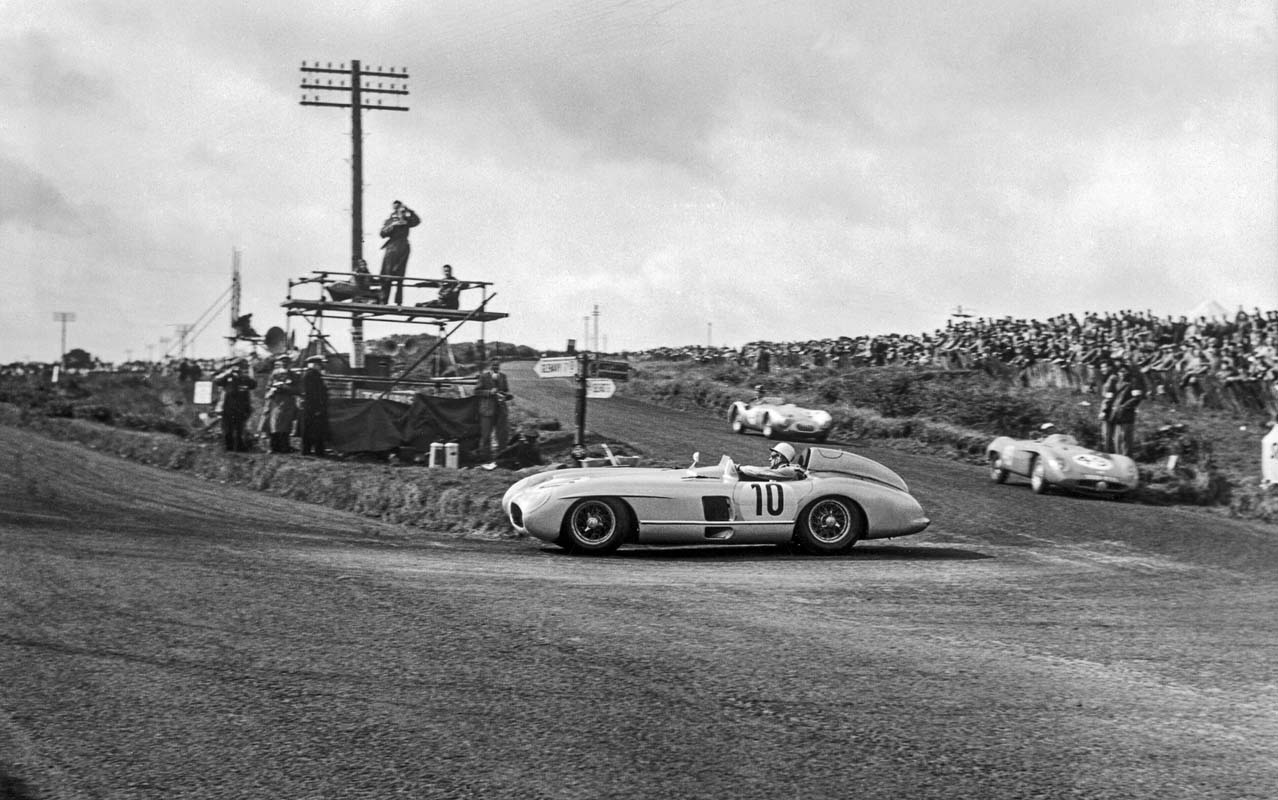