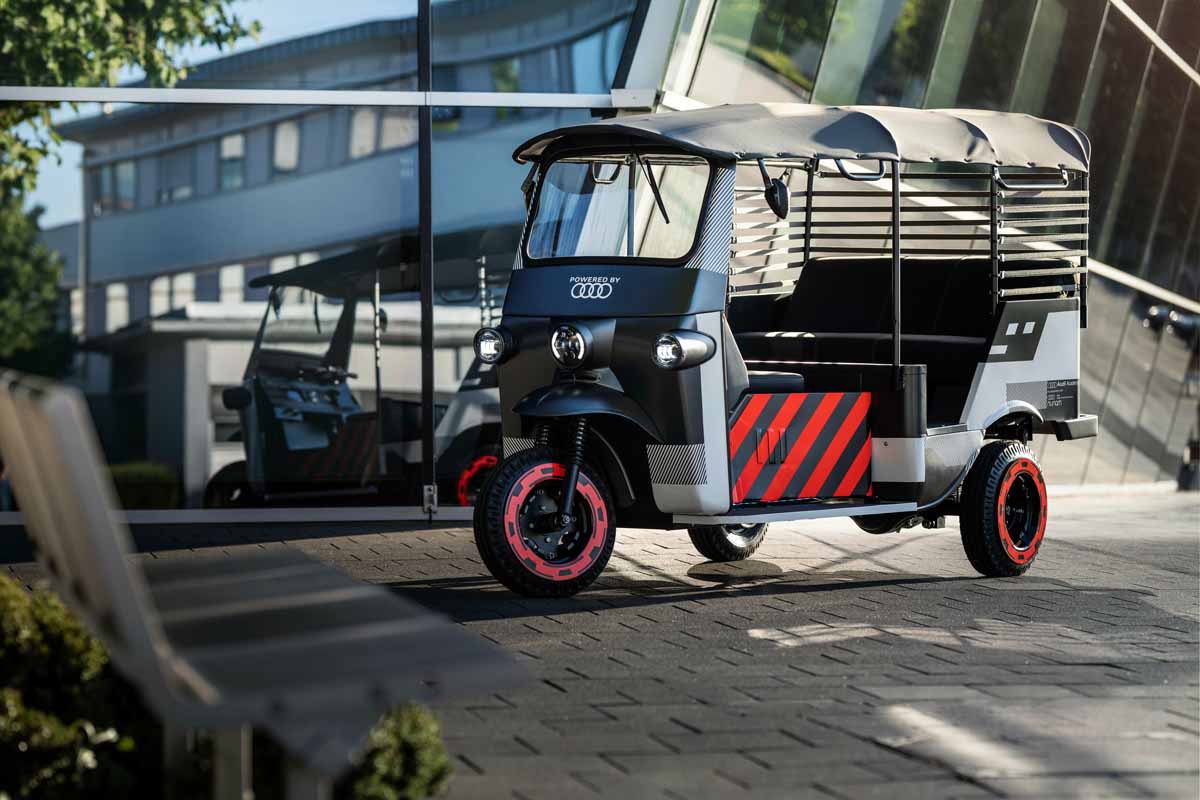 A second life for electric car batteries: The German–Indian start-up Nunam is bringing three electric rickshaws to the roads of India. They are powered by used batteries taken from test vehicles in the Audi e-tron test fleet. The aim of the project is to explore how modules made with high-voltage batteries can be reused after their car life cycle and become a viable second-life use case. The project also aims to strengthen job opportunities for women in India in particular: They will be provided with the e-rickshaws to transport their goods. The non-profit start-up based in Berlin and Bangalore is funded by the Audi Environmental Foundation. Nunam developed the three prototypes in collaboration with the training team at Audi’s Neckarsulm site, which in turn benefits from the intensive intercultural exchange. This is the first joint project between both AUDI AG and the Audi Environmental Foundation in addition to Nunam.

The e-rickshaws powered by second-life batteries are scheduled to hit the roads in India for the first time in a pilot project in early 2023. There they will be made available to a non-profit organization. Women in particular will be able to use the all-electric rickshaws to transport their goods to market for sale, all without the need for intermediaries. The e-rickshaws are powered by used battery modules that spent their first life in an Audi e-tron. “The old batteries are still extremely powerful,” says Nunam cofounder Prodip Chatterjee. “When used appropriately, second-life batteries can have a huge impact, helping people in challenging life situations earn an income and gain economic independence – everything in a sustainable way.”

The start-up’s primary goal is to develop ways to use old batteries as second-life power storage systems, thus both extending their lives and using resources more efficiently.

“Car batteries are designed to last the life of the car. But even after their initial use in a vehicle, they still have a lot of their power,” Chatterjee explains. “For vehicles with lower range and power requirements, as well as lower overall weight, they are extremely promising. In our second-life project, we reuse batteries from electric cars in electric vehicles; you might call it electric mobility ‘lite’. In this way, we’re trying to find out how much power the batteries can still provide in this demanding use case.”

“E-rickshaws have an ideal eco-efficiency,” says 31-year-old Chatterjee. With a high-energy-density battery and comparatively low vehicle weight, the electric motor doesn’t have to be particularly powerful, since rickshaw drivers in India travel neither fast nor far. While electrically powered rickshaws are not an uncommon sight on the roads of the subcontinent today, they often run on lead-acid batteries, which have a relatively short service life and are often not disposed of properly.

At the same time, rickshaw drivers charge their vehicles primarily with public grid electricity, which has a high proportion of coal-fired power in India. Nunam has a solution for this as well: The e-rickshaws charge using power from solar charging stations. The solar panels are located on the roofs of the local partner’s premises. During the day, sunlight charges an e-tron battery, which acts a buffer storage unit. And in the evening, the power is passed on to the rickshaws. This approach makes local driving largely carbon-free. The upshot: The electric rickshaws can be used throughout the day – and still be charged with green power during the evening and night. In India, where the sun shines all year round, placing solar panels on the roof is a no-brainer. The charging station was also developed internally.

Nunam continuously monitors the e-rickshaws’ performance and range. The social entrepreneurs make all the e-rickshaw data they collect available to potential imitators on the open-source platform https://circularbattery.org/. In fact, imitation is expressly encouraged. “Initiatives like the one pioneered by Nunam are needed to find new use cases for e-waste. Not only in India, but worldwide. So Nunam shares its knowledge to motivate more initiatives to develop products with second-life components that can drive the eco-social revolution forward,” says Audi Environmental Foundation Director Rüdiger Recknagel. The Foundation has been funding Nunam since 2019.

Moreover, after the battery has spent its first life in an Audi e-tron and its second in an e-rickshaw, it has not necessarily reached the end of the road. In a third step, the batteries’ remaining power might be used for stationary applications such as LED lighting. “We want to get everything possible out of each battery before recycling,” says cofounder Prodip Chatterjee.

In the long term, electric mobility and solar energy can help reduce India’s dependence on fossil fuels such as coal, reduce the huge volume of exhaust emissions on India’s roads, and provide people with a reliable power supply. Rüdiger Recknagel comments: “In many ways, this project is pointing the way forward.”

“Anchoring sustainability in training early on”

In addition to the rickshaws intended for road use in India, the trainees at the Neckarsulm site are developing an additional show rickshaw in cooperation with Nunam. Visitors to the GREENTECH FESTIVAL in Berlin can check it out – and even give it a test drive – from June 22. Under the guidance of Timo Engler, head of automotive engineering / logistics training in Neckarsulm, a twelve-strong team of trainees is playing a key role in development. “The trainees and Nunam are in constant communication with each other – we have a dedicated line between Neckarsulm and Bangalore. In building the show rickshaw, our trainees are focusing on range, charging time, and design – the result is a rickshaw with Audi’s DNA,” says Engler. “To us, it’s important that the trainees are involved in the project from start to finish and are given the freedom to contribute and try out their own ideas. ‘Learning by doing’ is our recipe for success. At the same time, we impart fundamental knowledge in the development of electromobility, resource efficiency, and charging technologies in an almost playful, incidental way. It’s a groundbreaking project because it combines the megatrends of sustainability, electromobility, internationalization, and social responsibility.”

The trainees replaced the combustion engine with an electric one and designed the underfloor to both accommodate the second-life batteries and be splashproof, using as many recyclable materials as possible all the while. Mechatronics technicians, coachbuilders, painters, tool mechanics, IT specialists and automation technicians were all involved in the project. “We are thrilled to be able to offer our trainees the opportunity to participate in an international project through the Foundation’s network. It promotes the intercultural exchange of know-how and technology, from which both sides benefit greatly,” says Rüdiger Recknagel. 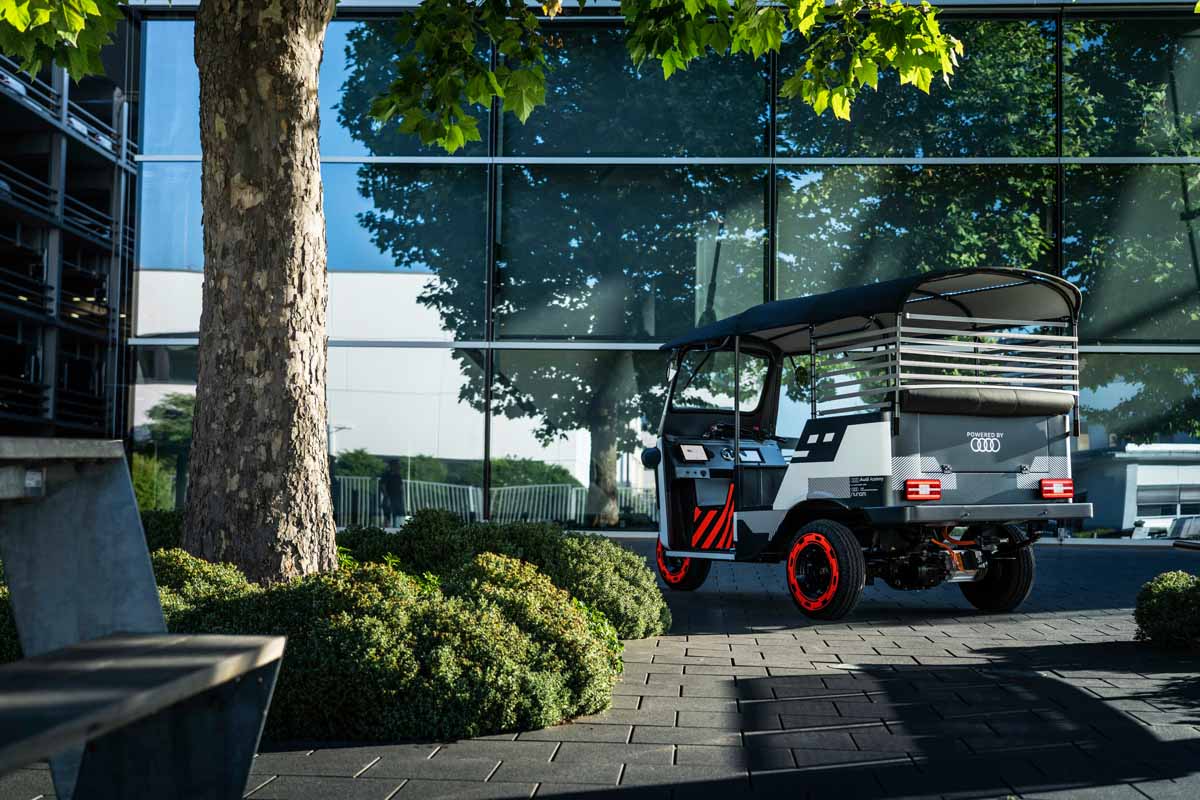 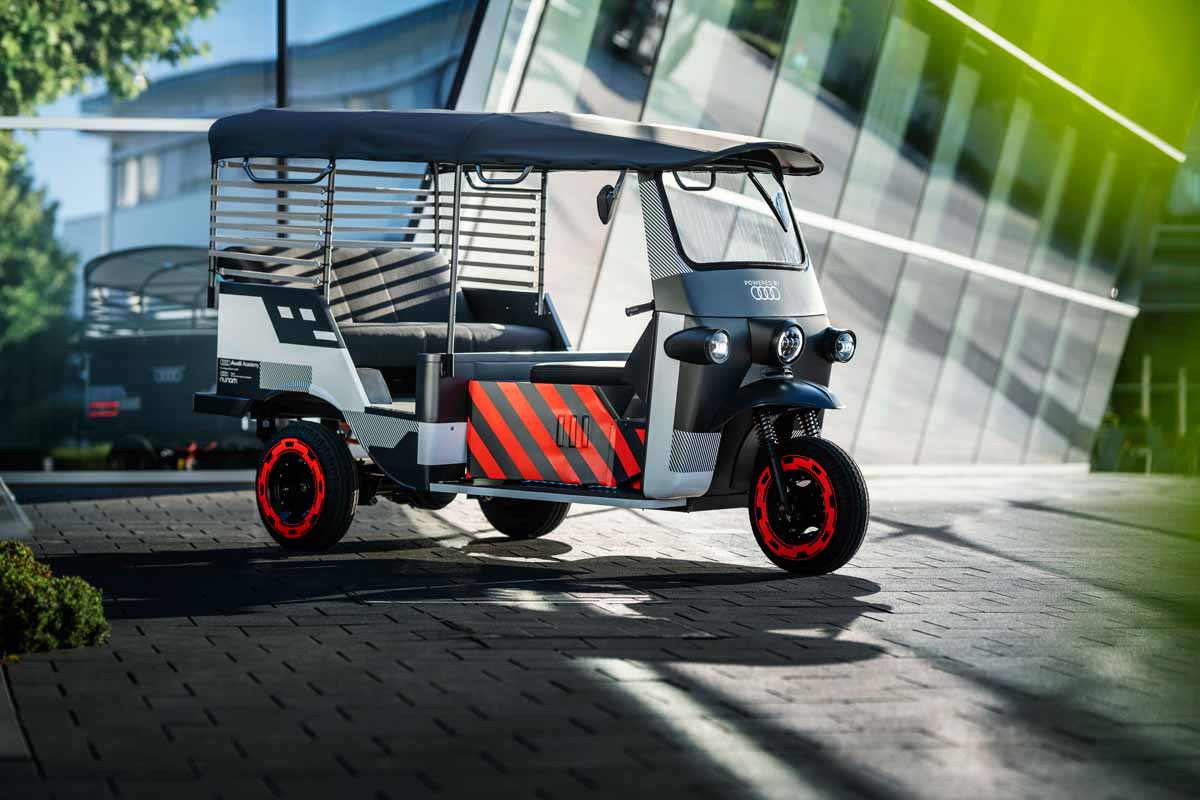 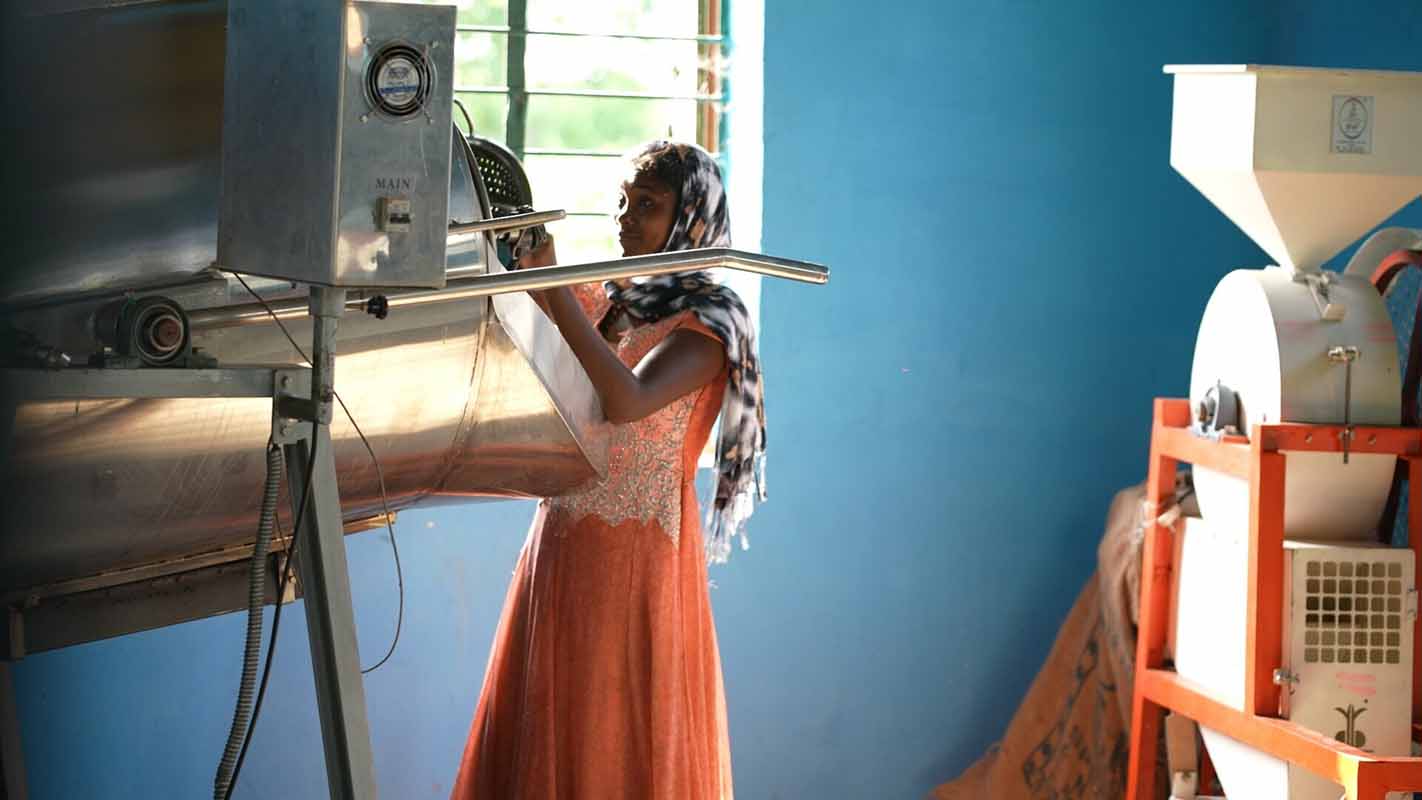 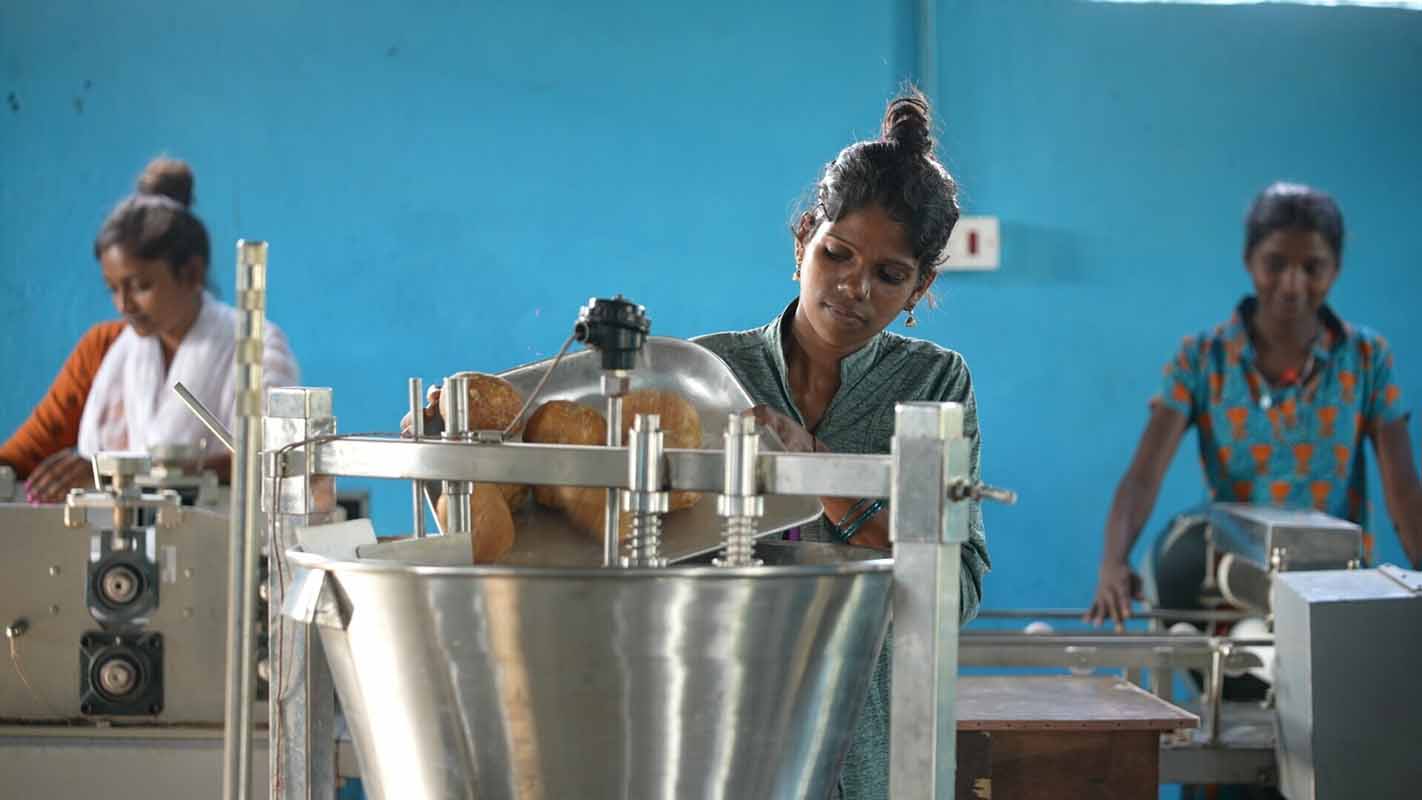 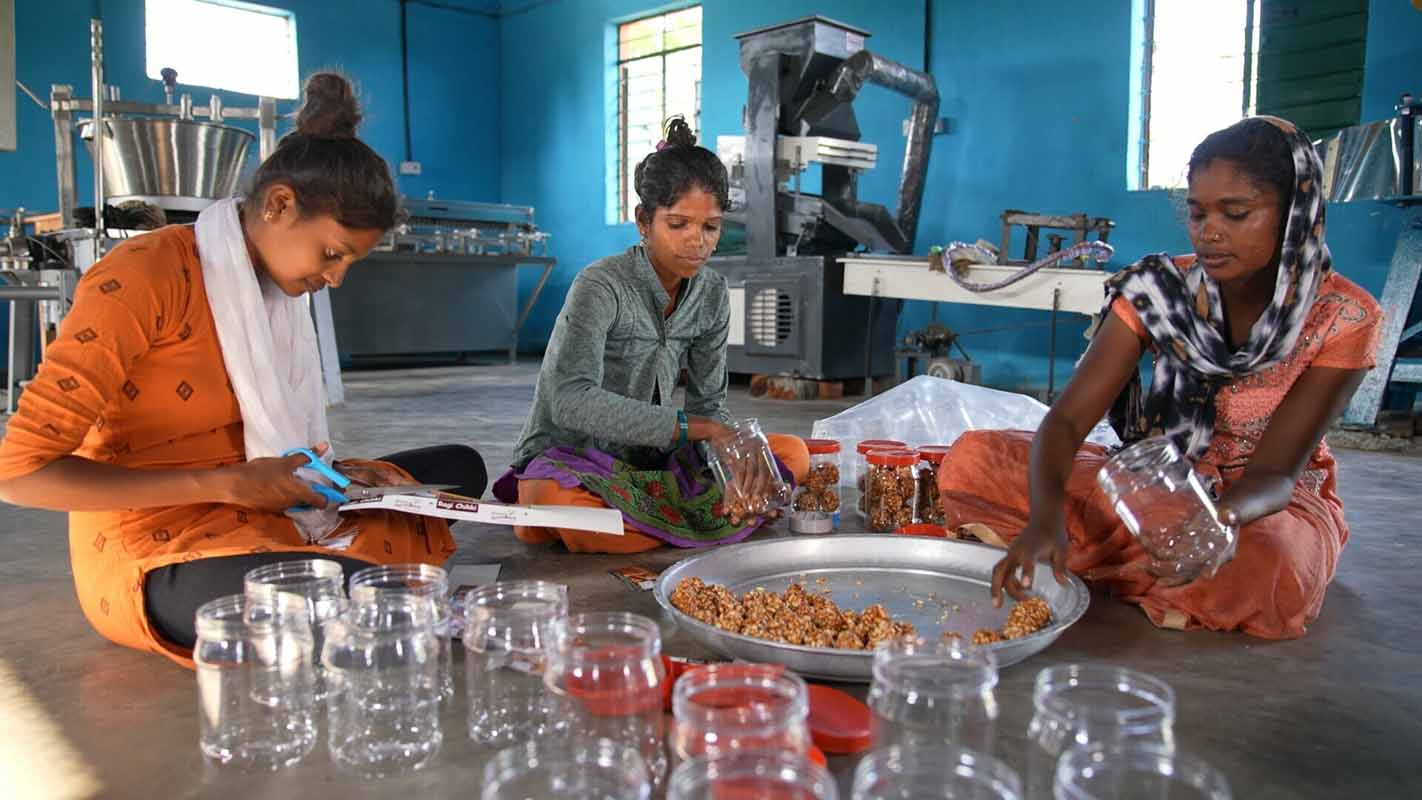 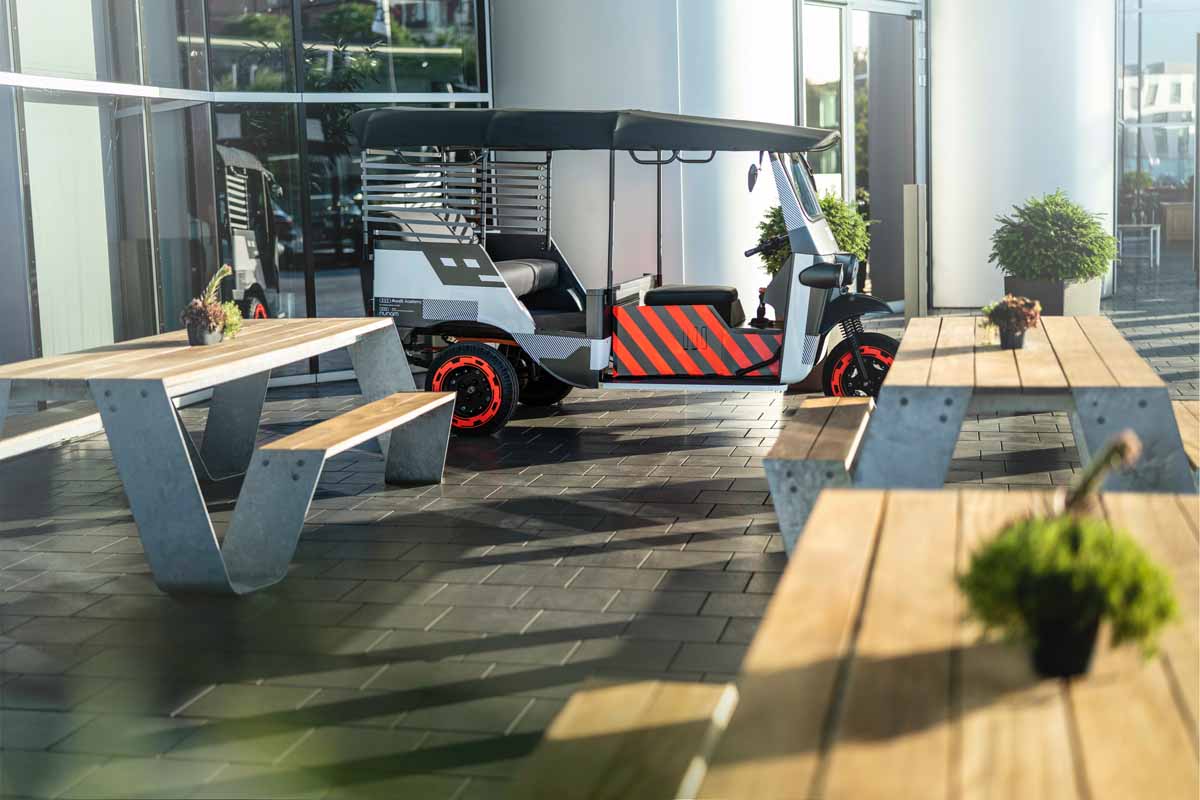 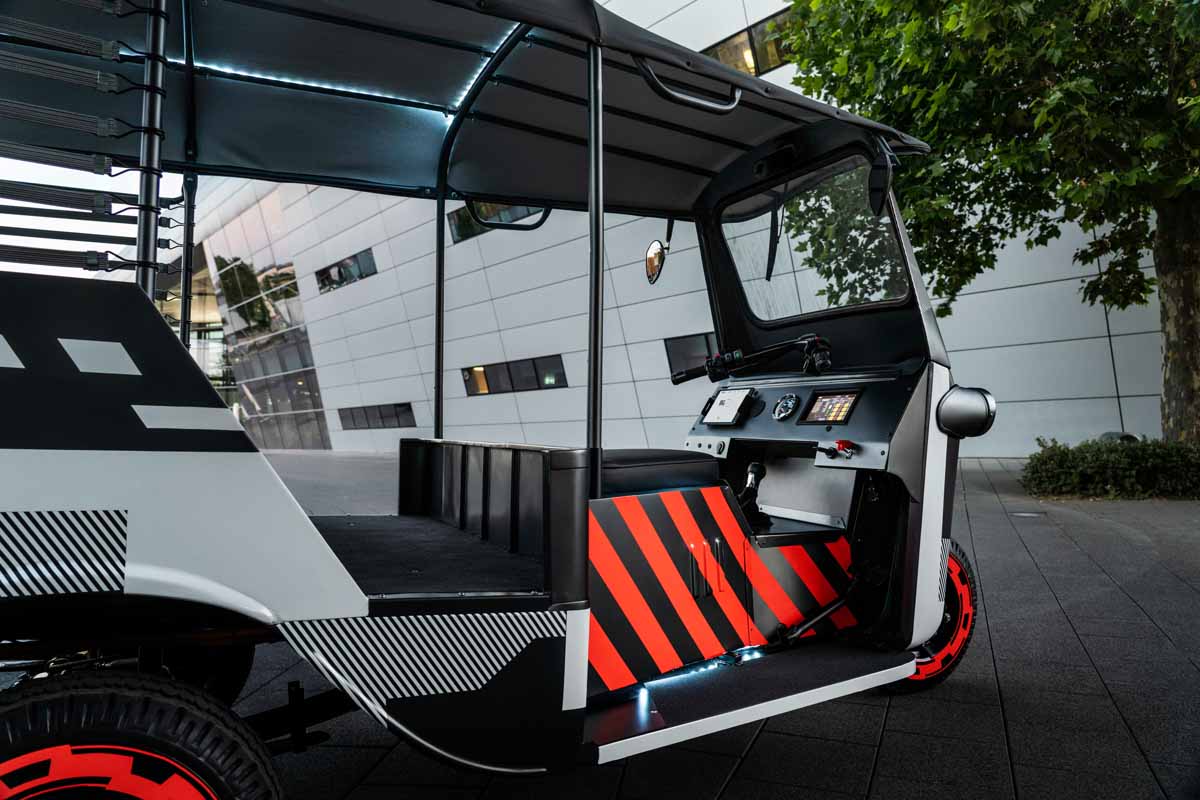 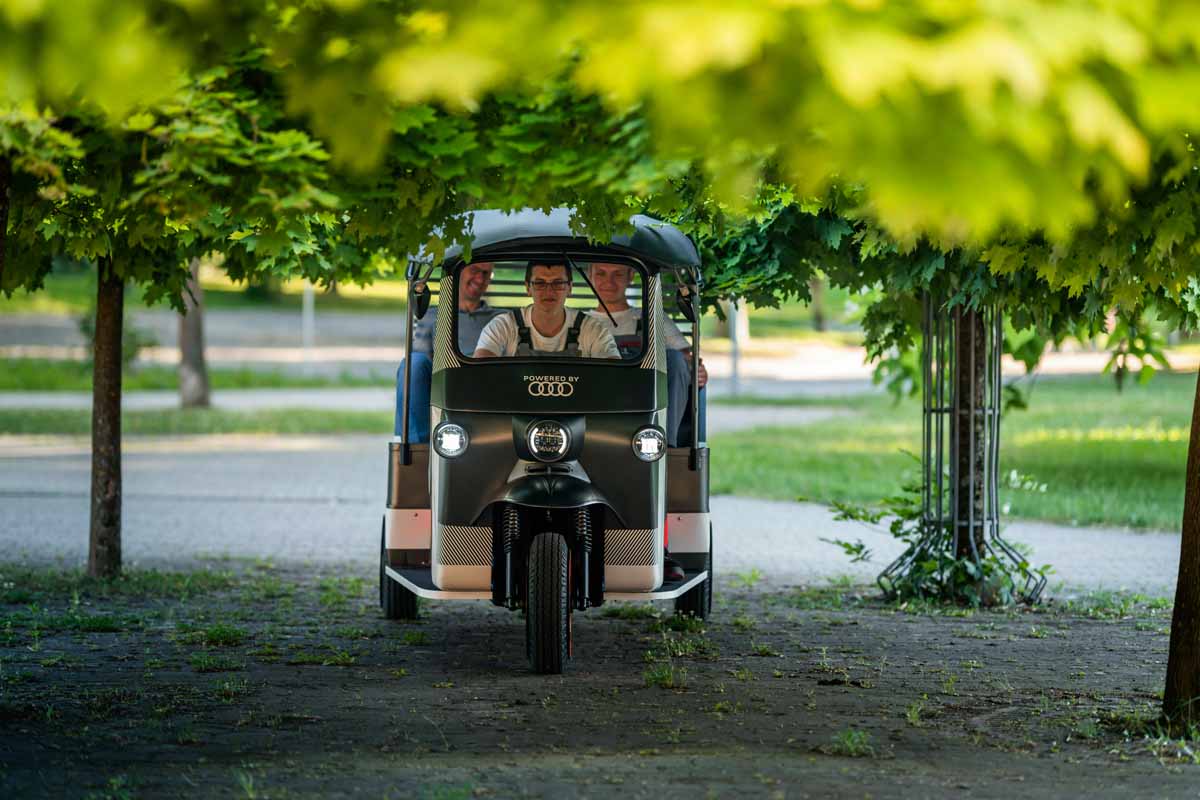 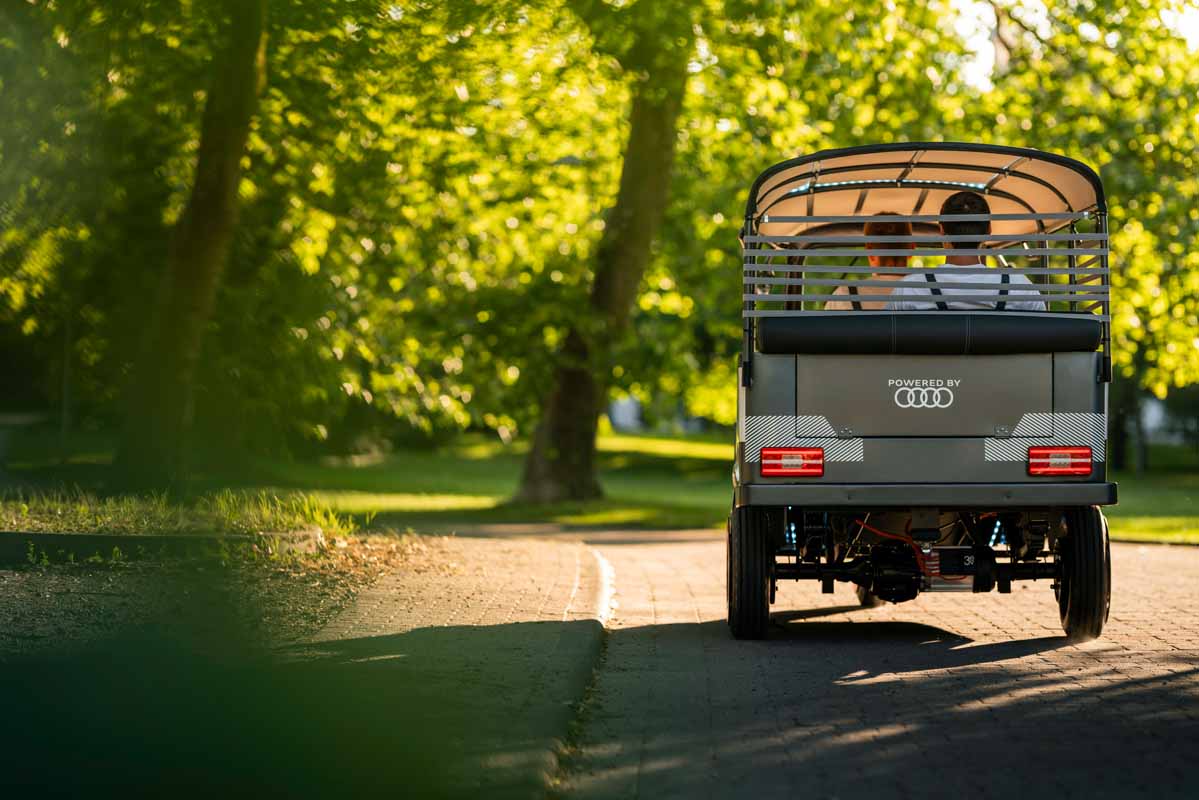 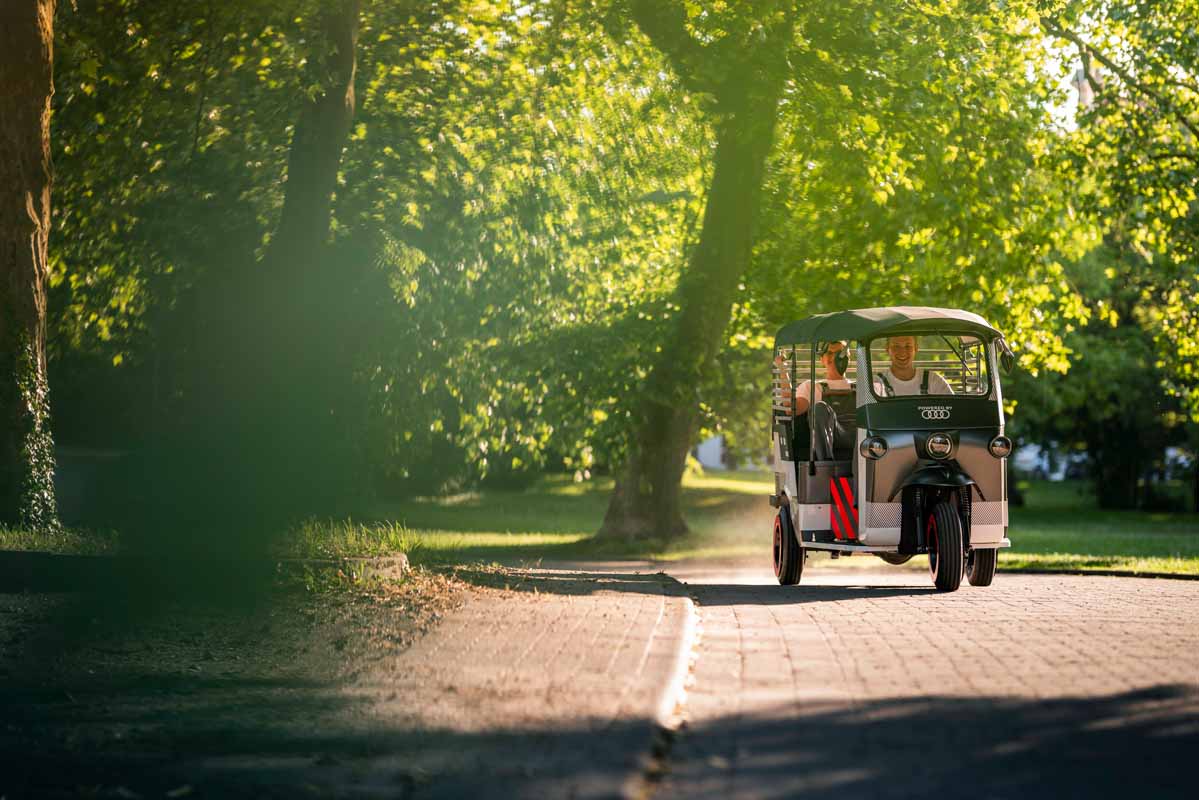 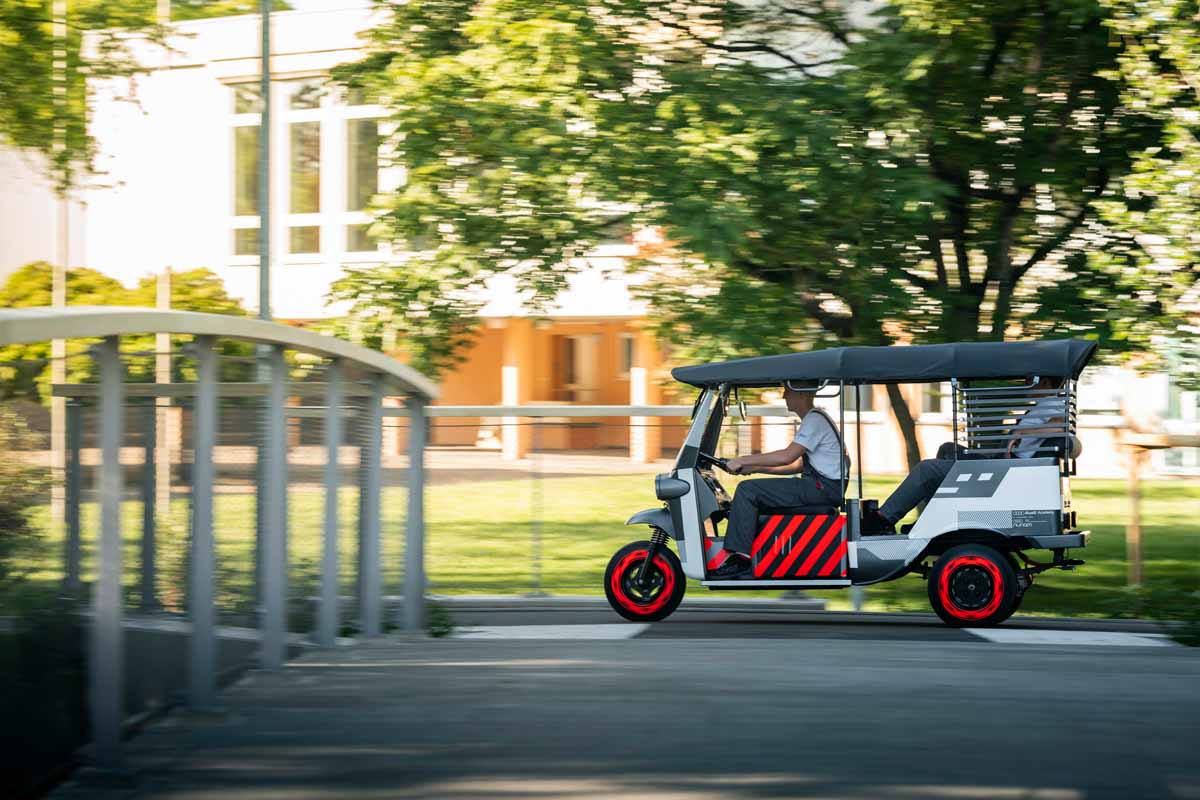 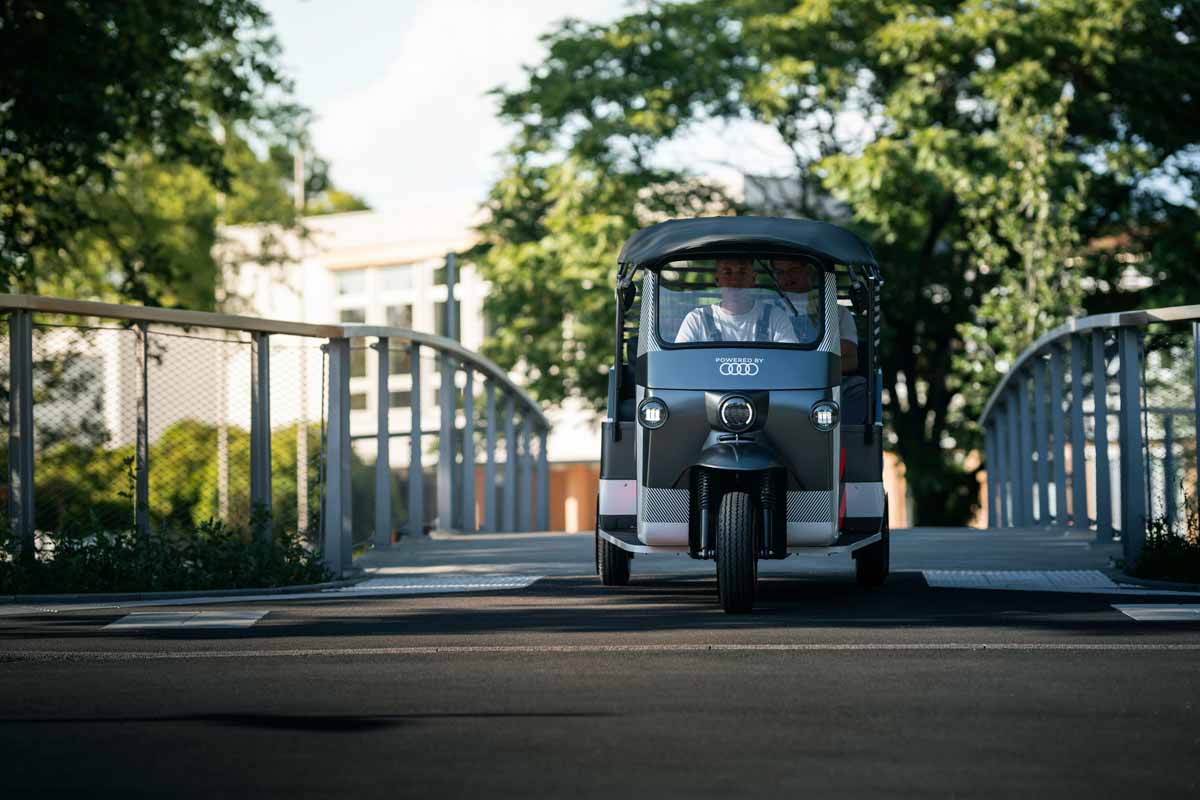 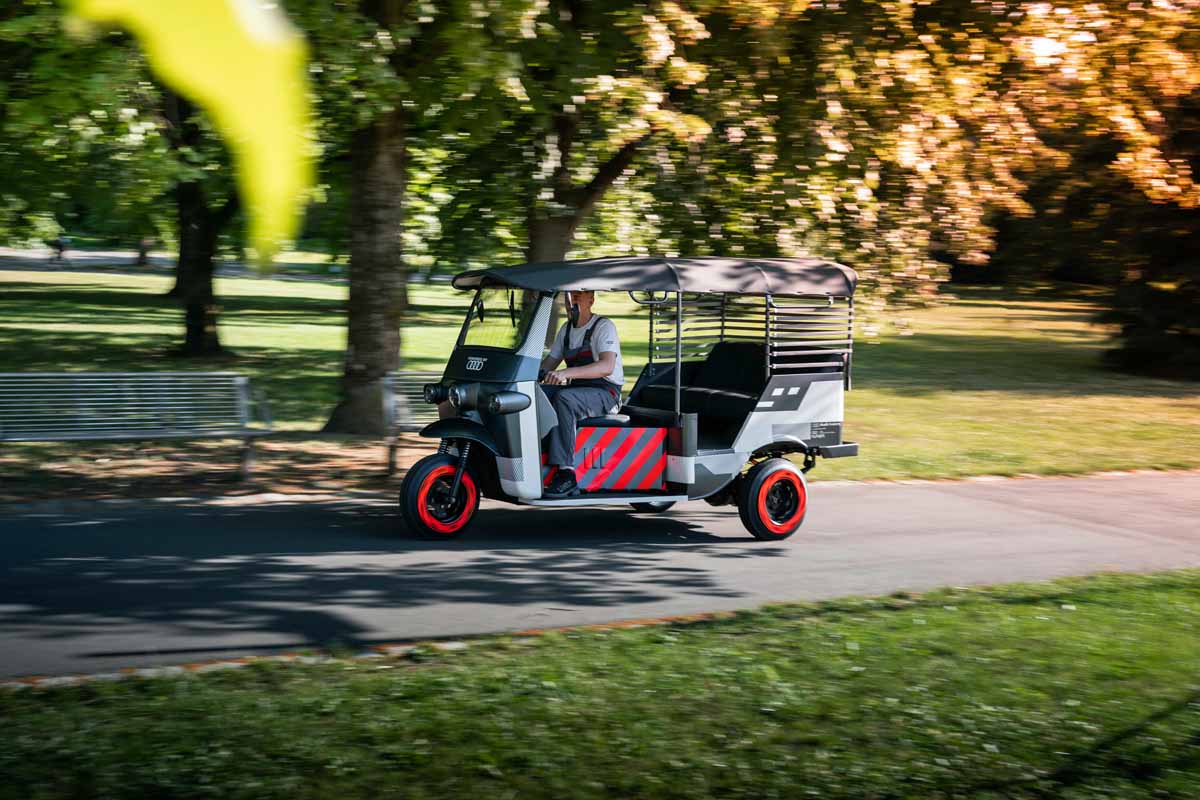 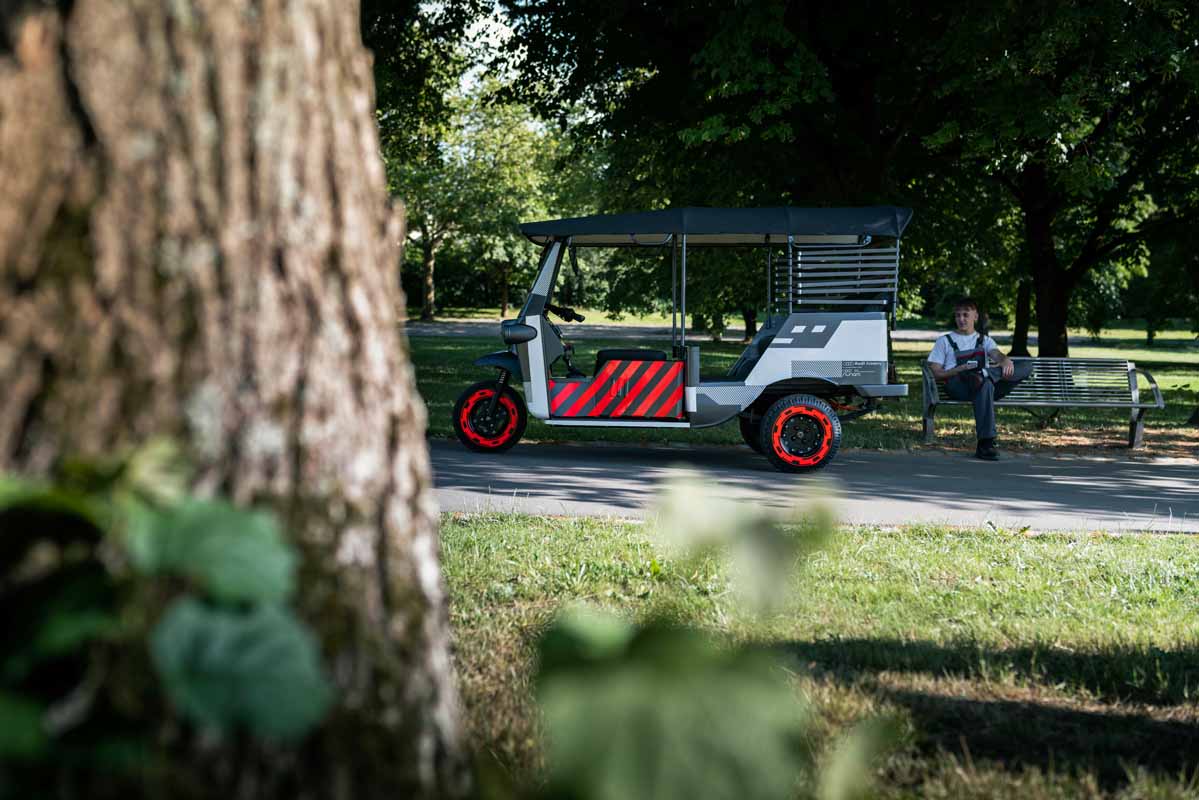 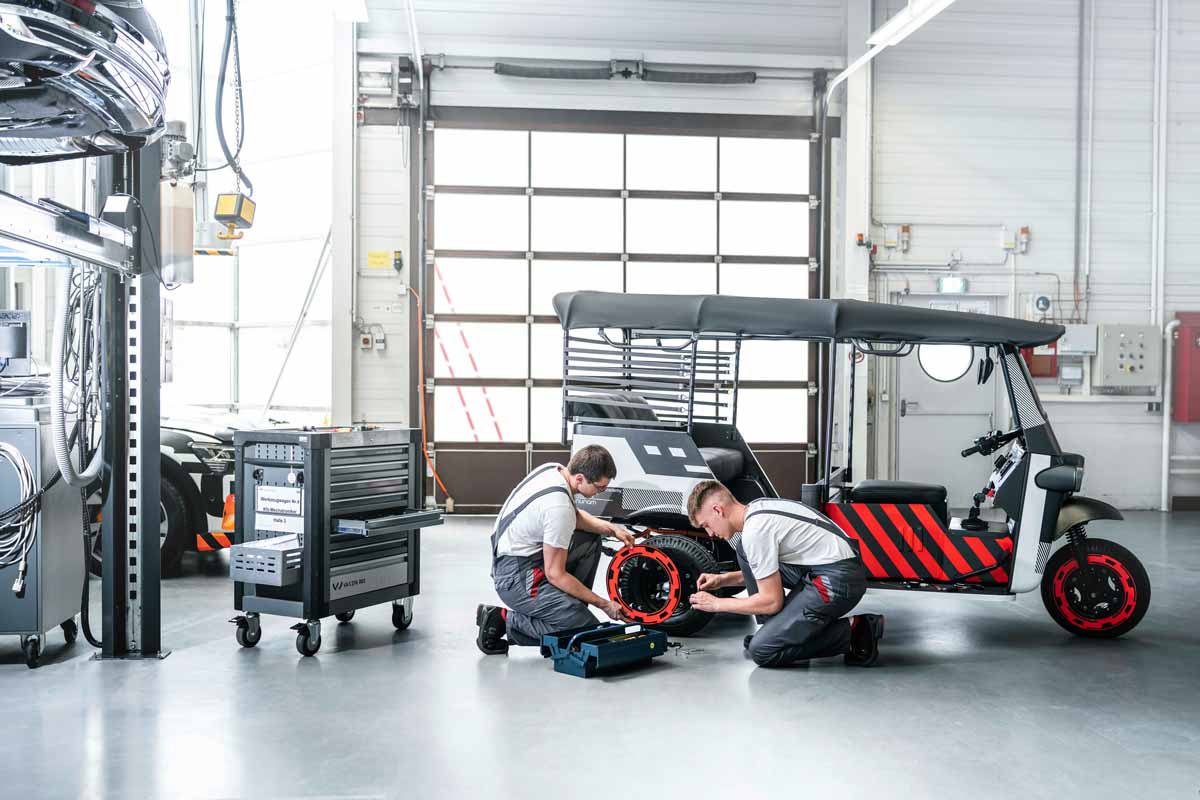 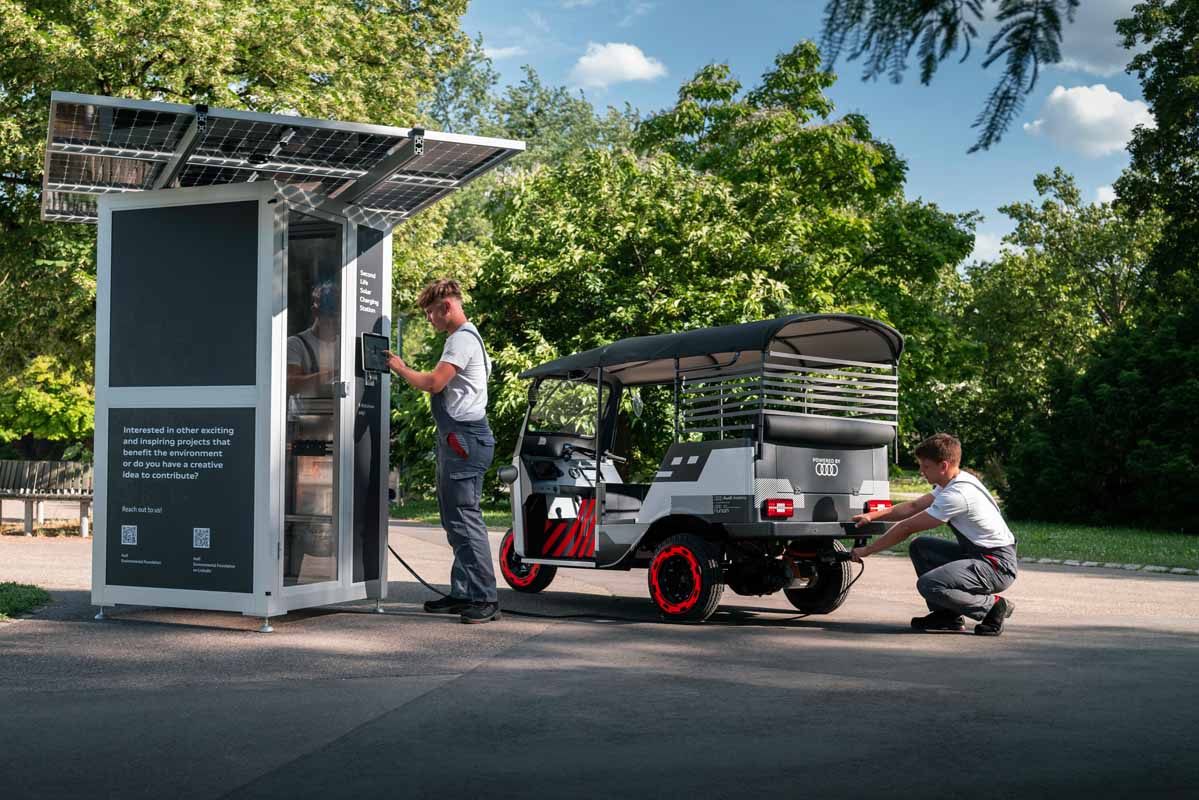