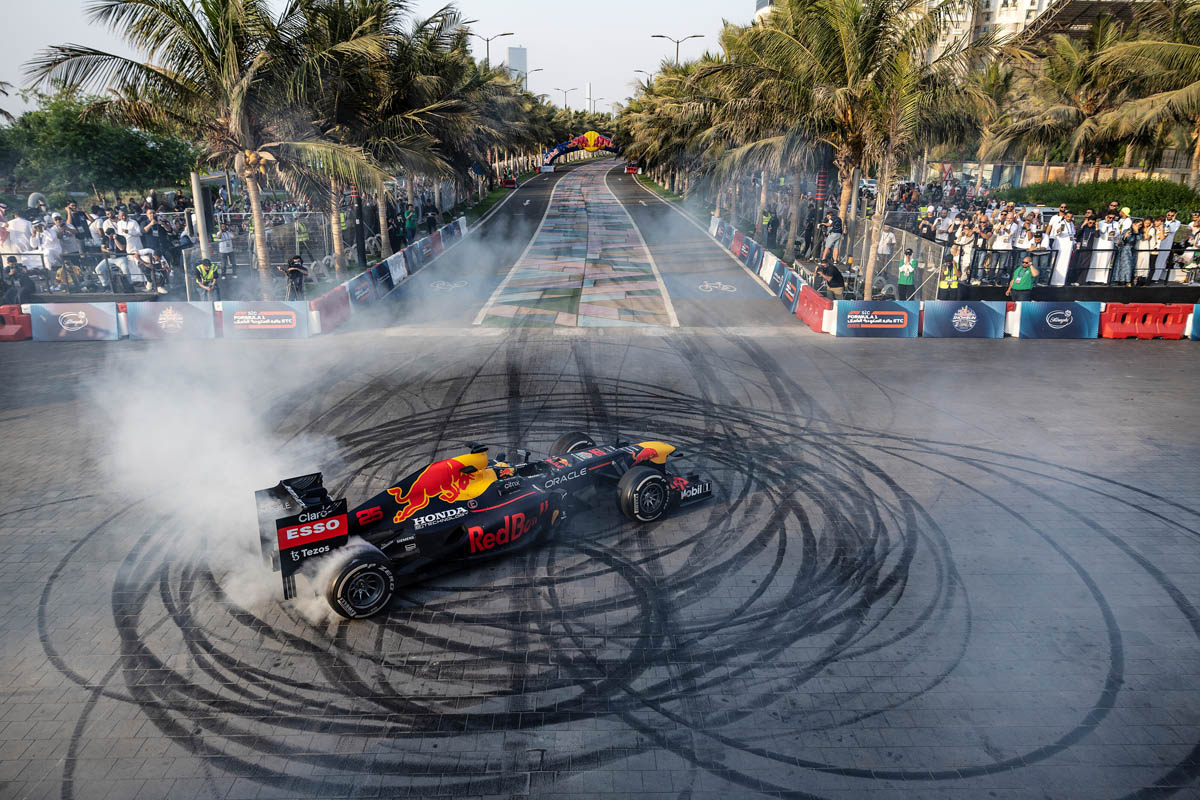 Three weeks to the day before F1 finally arrives in the Kingdom of Saudi Arabia for the inaugural FORMULA 1 STC SAUDI ARABIAN GRAND PRIX 2021 at the brand-new Jeddah Corniche Circuit on the weekend of December 3rd – 5th, Saudi speed and motorsports enthusiasts got the chance to experience a taste of the electrifying energy and atmosphere that accompanies the pinnacle of motorsport.

The famous RB8 Formula 1 car – which won the F1 Constructor and Drivers’ World Championship for Red Bull and Sebastian Vettel respectively in 2012 – wowed thousands of onlookers along the Jeddah Waterfront. The main event was accompanied by high-adrenaline side events that thrilled the thousands of fans who came down to the Red Sea coastline to experience the sound and energy of an F1 car racing at full speed live and in person

The Red Bull Showrun was held under the patronage of His Royal Highness Prince Khalid Bin Sultan Al Abdullah Al-Faisal, Chairman of the Saudi Automobile and Motorcycle Federation and Saudi Motorsports Company, and in partnership with the FORMULA 1 STC SAUDI ARABIAN GRAND PRIX 2021, the Ministry of Sport, the Saudi Automobile and Motorcycle Federation, and the Quality of Life Program, one of the key elements in the Kingdom’s Vision 2030.

The roar of the RB8’s classic 750 horsepower, V8 engine announced the start of this one-of-a-kind show that perfectly paves the way for the Kingdom to host its first ever Formula 1 race weekend in less than a month’s time.

The rumbling of the engine merged with the cheers of the large audience who lined up alongside the Corniche to get up close and personal with the RB8 – the car which helped the Red Bull outfit to 7 wins, 14 podium places, 9 pole positions and a total of 460 points in 2012. In the very capable hands of Austrian former F1 driver, Patrick Friesacher, it sped through the streets of Jeddah on a stretch of road running to just over 800 metres in length before entertaining the crowd with a series of ‘doughnuts’, much to the excitement of everybody present.

Furthermore, fans attending the demonstration were also treated to additional awe-inspiring performances that were not limited to that of the RB8!

Waterfront-goers were also able to watch other side events, including a junior eKarting parade and a special demonstration by the legendary Saudi-sponsored, 1979 Dutch Grand Prix winning Williams FW07/01 – driven by none other than 4 x IndyCar Series World Champion, 3 x Indianapolis 500 and 24 Hours of Dayton winner, Dario Franchitti! Now owned by Dallah Albaraka and fully restored by Williams this classic car proved to be an emotional highlight for people of Jeddah as it raced along the Corniche.

HRH Prince Khalid Bin Sultan Al Abdullah Al-Faisal spoke of his elation at event: “We are thrilled to have welcomed the Red Bull Showrun to Jeddah today and to further strengthen the ties between the Saudi people and Formula 1 ahead of the inaugural race weekend here in three weeks’ time. I want to thank the Red Bull Racing team for putting on such an incredible show, one which delighted everyone present with the incredible performances staged on our city’s streets! Today was a day the people of Jeddah will remember for a long time, as for many it will have been their first taste of the magic of F1. The great news is that they don’t have to wait very long for their next chance to see the fastest cars on the planet race at full speed along our magnificent waterfront. We now look forward to welcoming Red Bull, F1 and fans from all over the world to Jeddah on December 3rd– 5th!”

Patrick Friesacher was delighted to showcase the RB8 to the fans in Jeddah: “It was really super cool, fantastic crowd out. I really loved it especially with this championship winning car from 2012, to bring it here to Jeddah and bring it a little bit closer to the fans.  In three weeks, we will have the F1 race here and hopefully many people will come out and we gave them a little taste today!”

Dario Franchitti also commented: “‘Driving the legendary FW07/01 here in Saudi Arabia, where this car holds such a special place in the hearts of the people, in front of so many fans was a true honour. I’d like to thank Dallah Albaraka, who has helped restore this classic car, for inviting me to participate today and be part of such an amazing event. I’m even more excited than before to come back in a few weeks’ time for the F1 race weekend!’

Local hero Shadi Al Dhaheri, born and raised in Jeddah, spoke of his pride in putting on a show in front of his home fans: “That was amazing, I’m so happy! Mike and I put on a great motorsport show today for the fans. We could feel how crazy the audience was for it. I have performed all over the world, but I was so excited to perform in front of my city today!”

Scheduled to make its F1 debut on December 3rd – 5th 2021, the 2021 FORMULA 1 STC SAUDI ARABIAN GRAND PRIX will mark its arrival in style with the newest circuit in the sport, estimated to see drivers reach average speeds of 250km/h, making it the fastest street circuit in the world – and in the top five fastest F1 circuits altogether! Indeed, the stars of F1 are projected to reach top speeds of up to 322km/h as they race towards Turn 27.

Featuring no less than 27 corners, the Jeddah Corniche Circuit stretches to 6.175km in length, making it the second longest circuit on the current F1 calendar, behind the legendary Circuit de Spa-Francorchamps, and the longest street circuit in the sport.

The fact the race will take place at night under the lights will only add to the amazing atmosphere F1 fans can expect to experience in December. 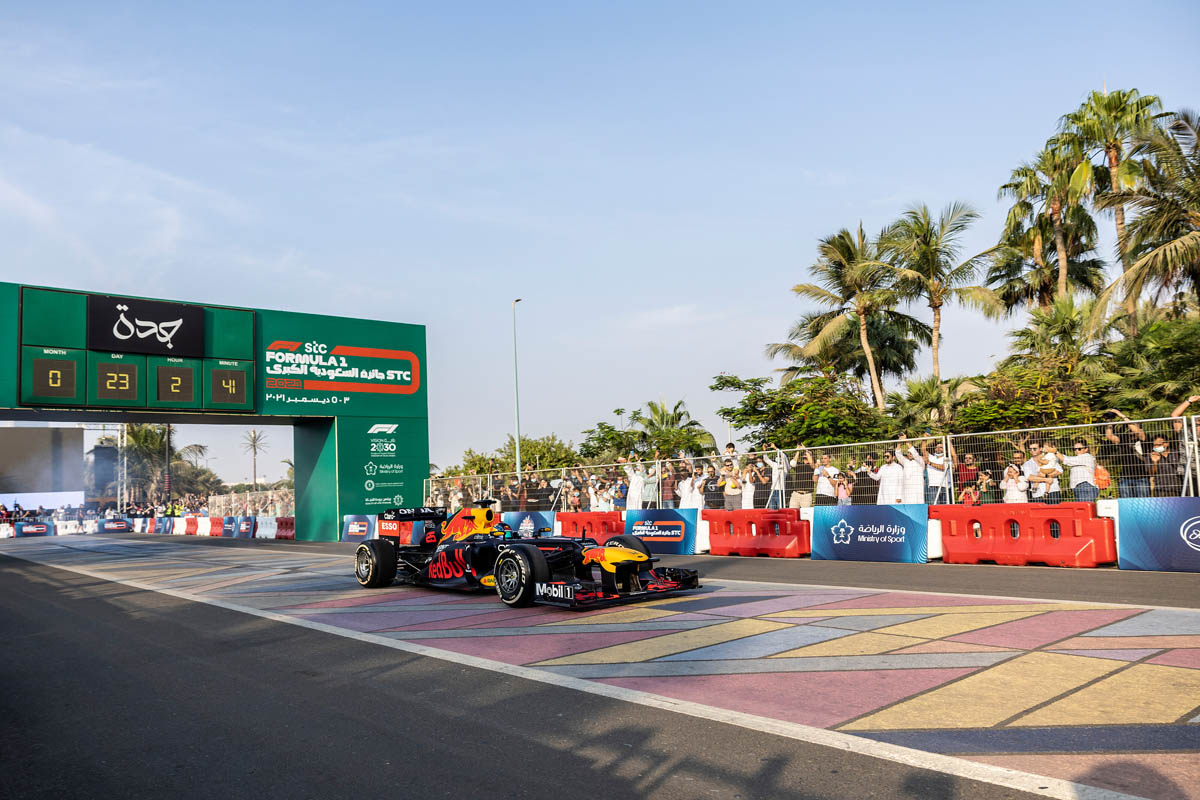 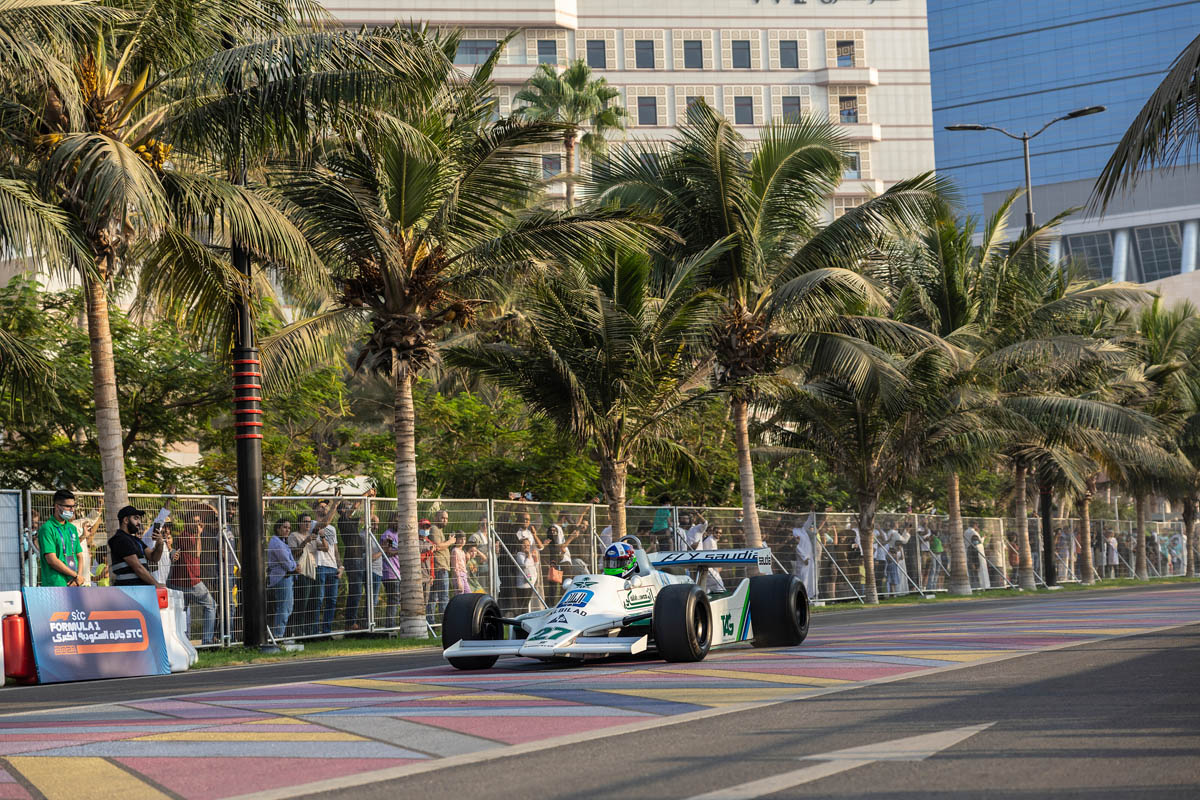 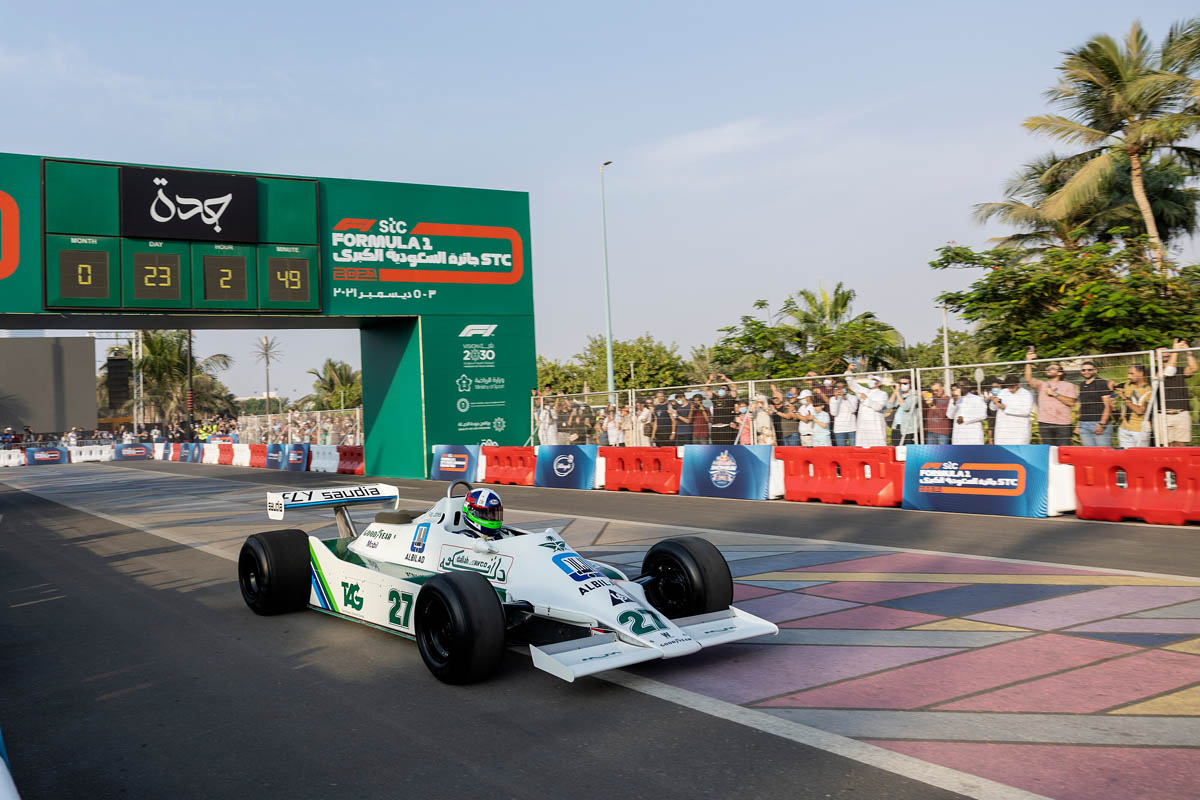 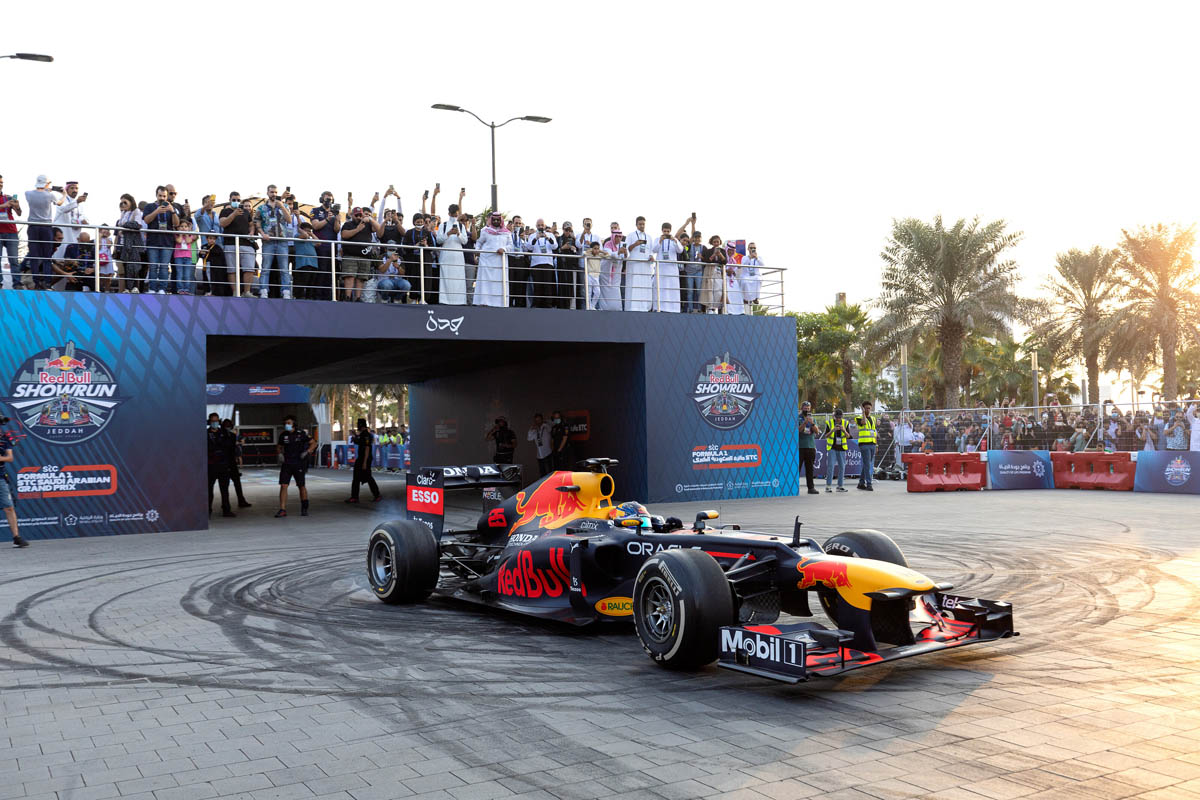 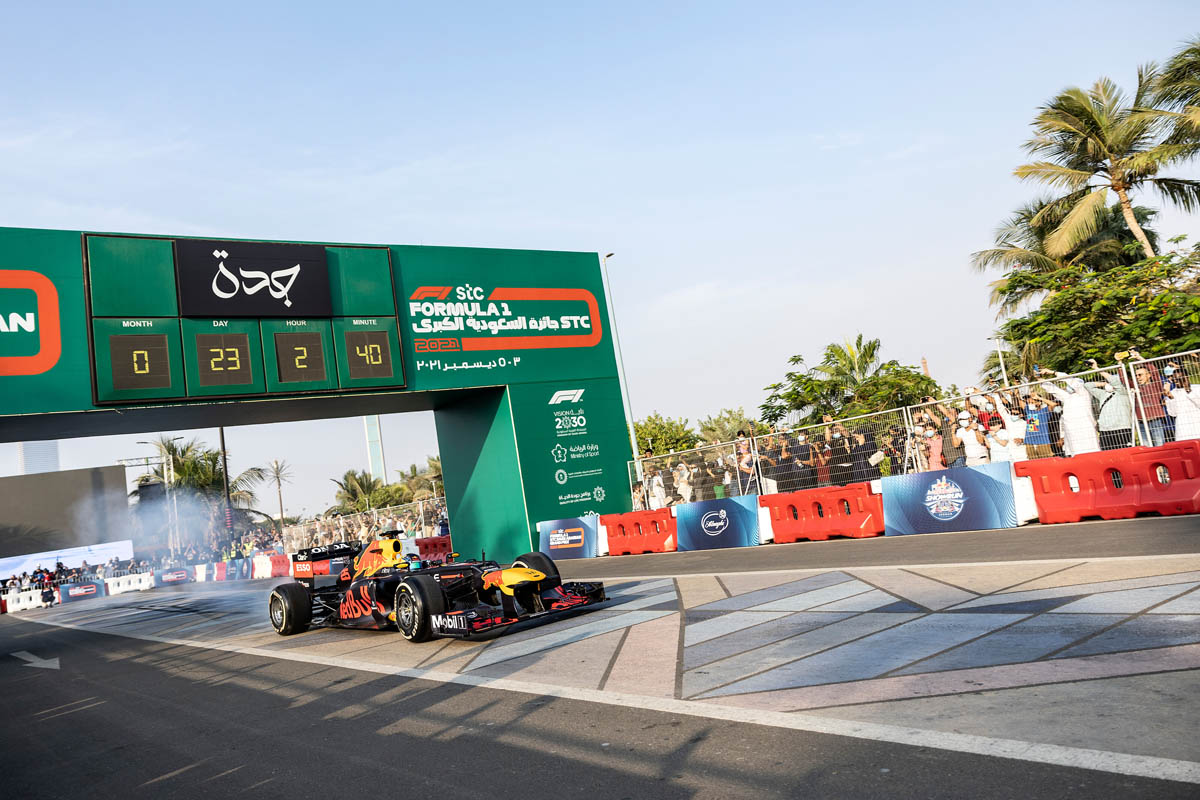 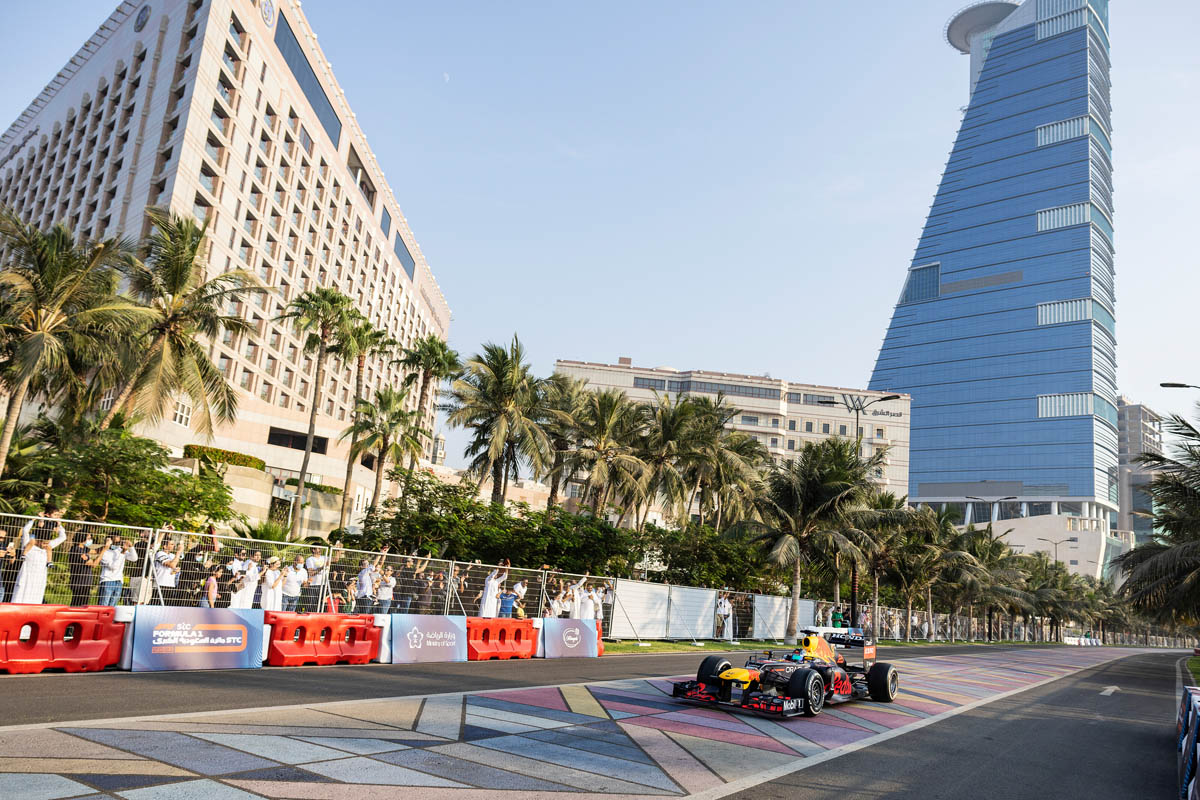