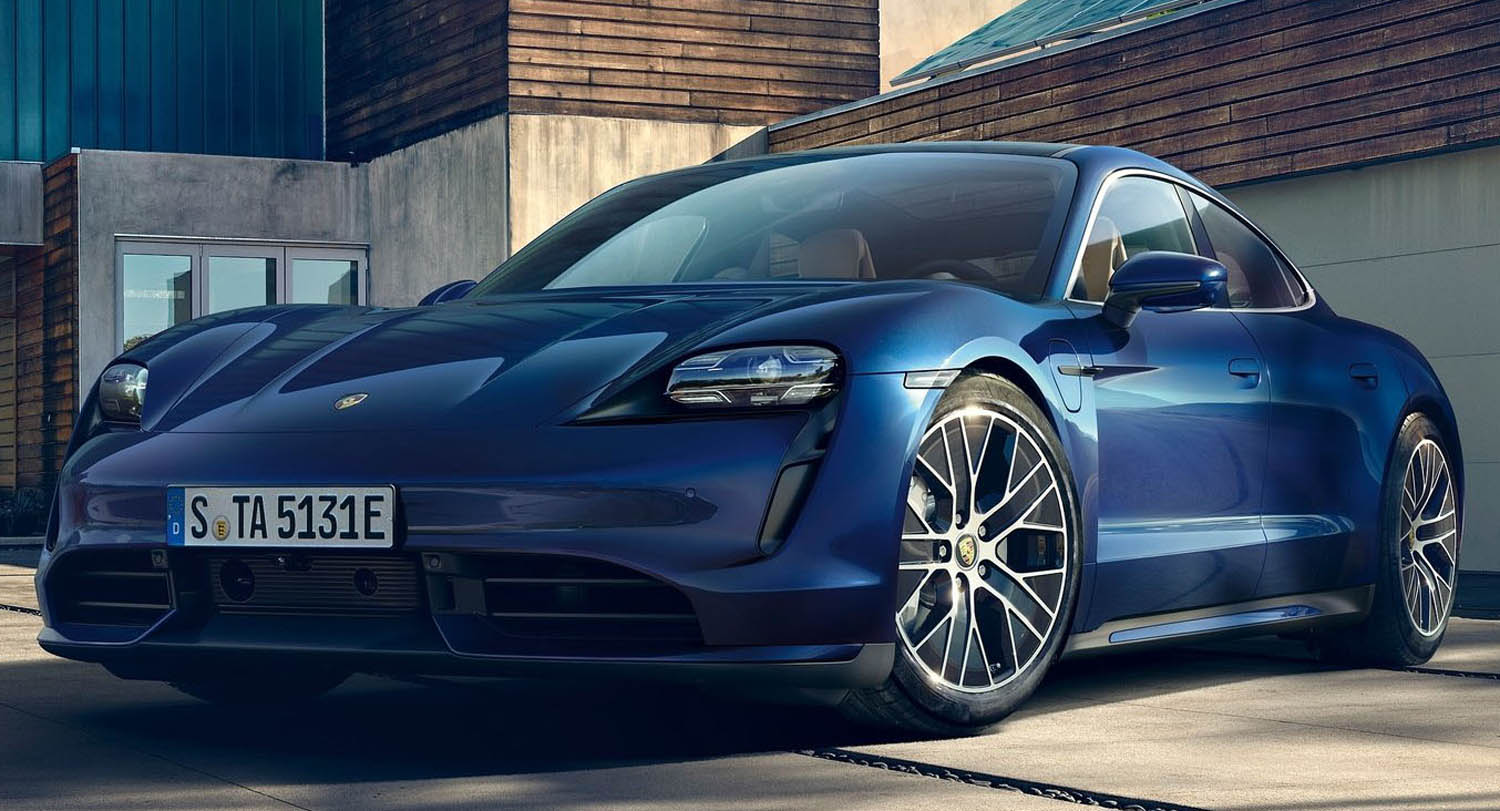 Porsche presented its first fully-electric sports car to the public with a spectacular world premiere held simultaneously on three continents. “The Taycan links our heritage to the future. It carries forward the success story of our brand – a brand that has fascinated and thrilled people the world over for more than 70 years,” said Oliver Blume, Chairman of the Executive Board of Porsche AG, who opened the world premiere in Berlin: “This day marks the start of a new era.”

The four-door sports saloon is a unique package, offering typical Porsche performance and connectivity with everyday usability. At the same time, highly advanced production methods and the features of the Porsche Taycan are setting new standards in the fields of sustainability and digitalisation. “We promised a true Porsche for the age of electromobility – a fascinating sports car that not only excites in terms of its technology and driving dynamics, but also sparks a passion in people all over the world, just like its legendary predecessors have done. Now we are delivering on this promise,” emphasises Michael Steiner, Member of the Executive Board of Porsche AG – Research and Development.

The first models in the new series are the Porsche Taycan Turbo S and Taycan Turbo. They are at the cutting edge of Porsche E-Performance and are among the most powerful production models that the sports car manufacturer currently has in its product range. Less powerful variants of these all-wheel drive vehicles will follow this year. The first derivative to be added will be the Taycan Cross Turismo at the end of next year. By 2022, Porsche will have invested more than six billion euros in electromobility.

The Porsche Taycan is the first production vehicle with a system voltage of 800 volts instead of the usual 400 volts for electric cars. This is a particular advantage for Taycan drivers on the road: in just over five minutes, the battery can be recharged using direct cur-rent (DC) from the high-power charging network for a range of up to 100 kilometres (according to WLTP). The charging time for five to 80 percent SoC (state of charge) is 22.5 minutes for charging under ideal conditions, and the maximum charging power (peak) is 270 kW. The overall capacity of the Performance Battery Plus is 93.4 kWh. Taycan drivers can comfortably charge their cars with up to eleven kW of alternating current (AC) at home.

With its clean, puristic design, the Porsche Taycan signals the beginning of a new era. At the same time, it retains the unmistakable Porsche design DNA. From the front it looks particularly wide and flat with highly contoured wings. The silhouette is shaped by the sporty roofline sloping downward to the rear. The highly sculpted side sections are also characteristic. The sleek cabin, the drawn-in rear C-pillar and the pronounced shoulders of the wings result in a sharply emphasised rear, typical of the brand. There are also innovative elements such as the glass-effect Porsche logo, which has been integrated into the light bar at the rear. With a Cd value from 0.22, the aerodynamically optimised basic shape makes a significant contribution to low energy consumption and thus long range. 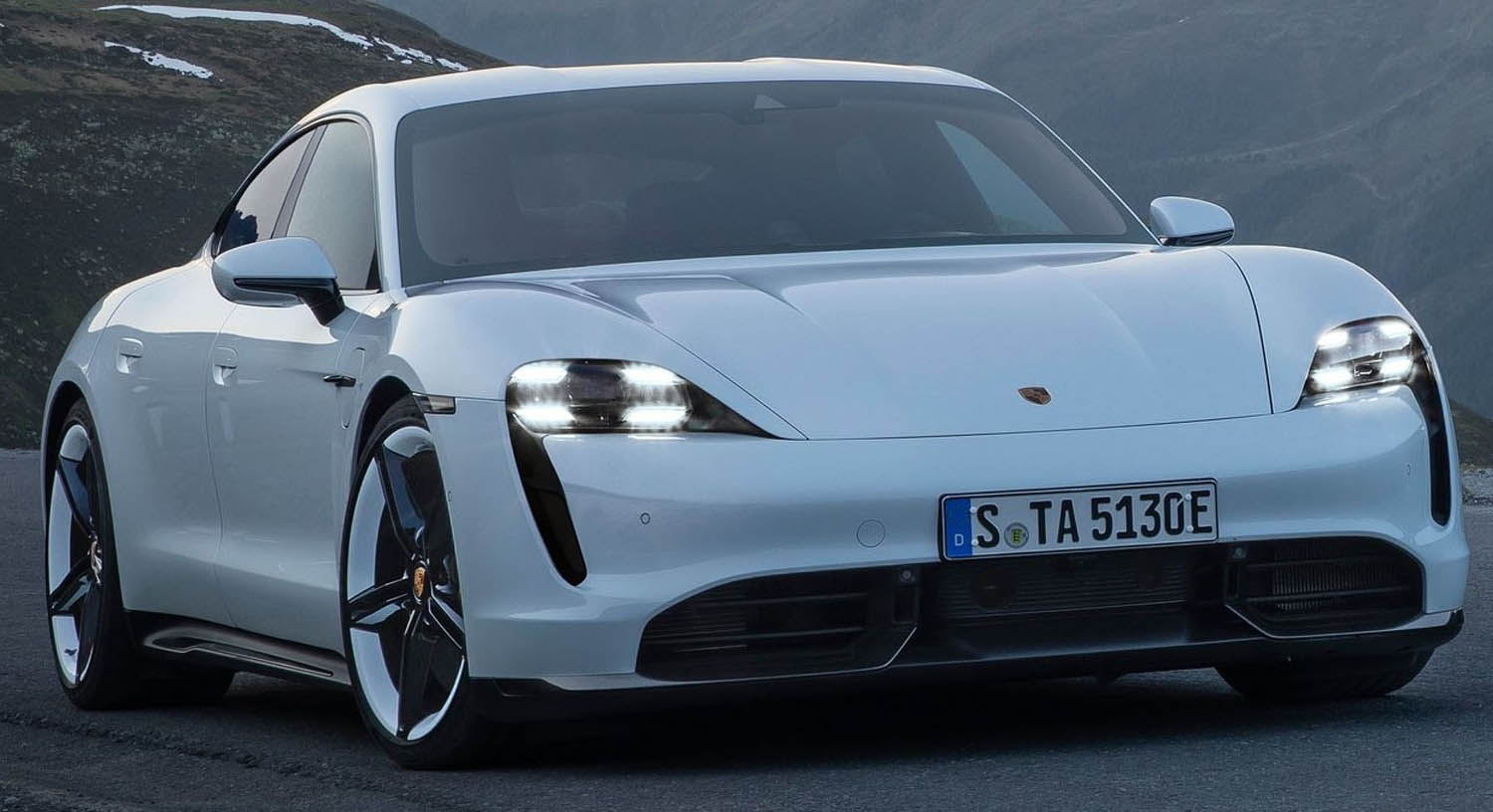 The cockpit signals the start of a new era with its clear structure and a completely new architecture. The freestanding, curved instrument cluster forms the highest point on the dashboard. This places a clear focus on the driver axis. A central, 10.9-inch infotainment display and an optional passenger display are combined to form an integrated glass band in a black-panel look. All user interfaces have been completely newly designed for the Taycan. The number of classic hardware controls such as switches and buttons has been greatly reduced. Instead, control is intelligent and intuitive – using touch operation or the voice control function, which responds to the command “Hey Porsche”.

With the Taycan, Porsche offers an entirely leather-free interior for the first time. Interiors made from innovative recycled materials underscore the sustainable concept of the electric sports car. “Foot garages” – recesses in the battery in the rear footwell – ensure sitting comfort in the rear and allow the low vehicle height typical of sports cars. Two luggage compartments are available: the front compartment has a capacity of 81 litres and the rear 366 litres.

The Porsche Taycan Turbo S and Taycan Turbo have two exceptionally efficient electric ma-chines, one on the front axle and one on the rear axle, thus making the cars all-wheel drive. Both the range and the continuous power of the drive benefit from the high efficiency of the permanently excited synchronous machines. The electric machine, transmission and pulse-controlled inverter are each combined into a compact drive module. The modules have the highest power density (kW per litre of package space) of all electric powertrains on the market today. A special feature of the electric motors is the “hairpin” winding of the stator coils. This technology makes it possible to incorporate more copper in the stator, increasing power output and torque while maintaining the same component volume. The two-speed transmission installed on the rear axle is an innovation developed by Porsche. First gear gives the Taycan even more acceleration from a standing start, while second gear with a long gear ratio ensures high efficiency and equally high power reserves. This also applies at very high speeds.

Porsche uses a centrally networked control system for the Porsche Taycan chassis. The inte-grated Porsche 4D Chassis Control analyses and synchronises all chassis systems in real time. The innovative chassis systems include adaptive air suspension with three-chamber technology including PASM (Porsche Active Suspension Management) electronic damper control, as well as the Porsche Dynamic Chassis Control Sport (PDCC Sport) electromechanical roll stabilisation system including Porsche Torque Vectoring Plus (PTV Plus). The all-wheel drive control with two electric motors and the recuperation system are unique. At up to 265 kW, the potential recuperation power is significantly higher than that of competitors. Driving tests have shown that approximately 90 percent of everyday braking is performed by the electric machines alone – without the hydraulic wheel brakes being activated.

The profile of the different driving modes basically follows the same philosophy as in other Porsche model series. This is supplemented by special settings which enable optimum use of the purely electric drive. Four driving modes are available: “Range”, “Normal”, “Sport” and “Sport Plus”. In addition, individual systems can be configured as required in the “Individual” mode. 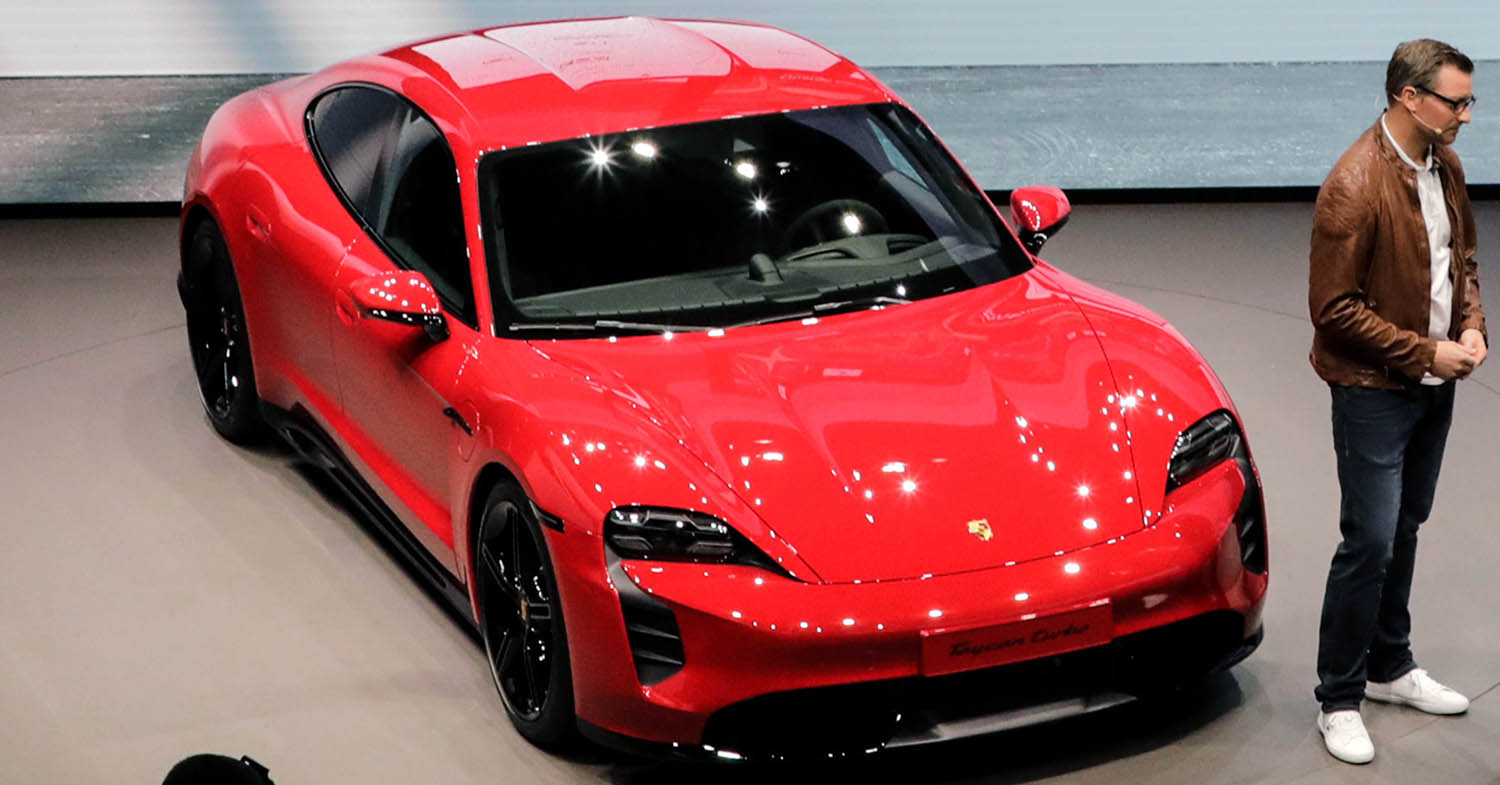 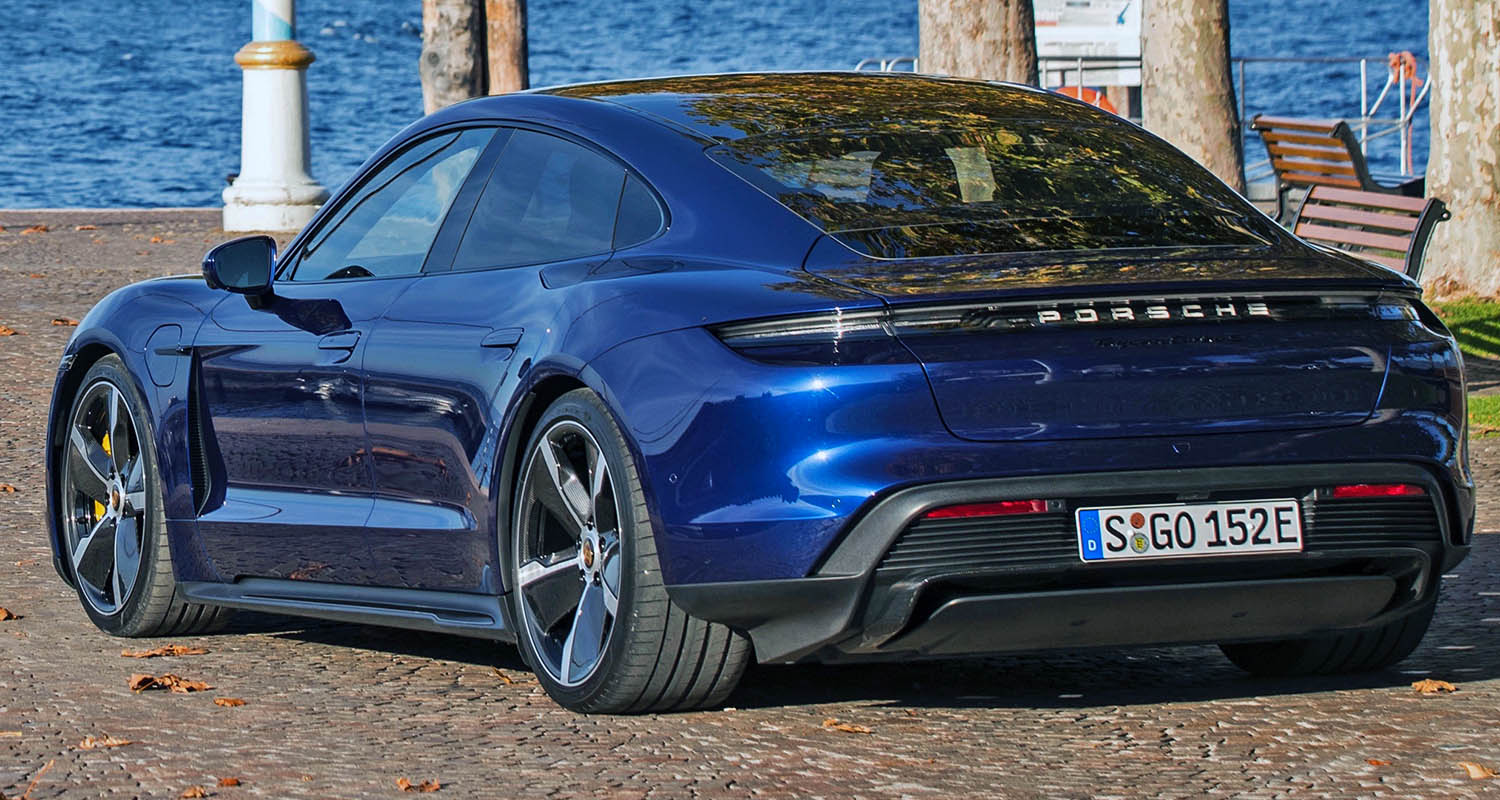 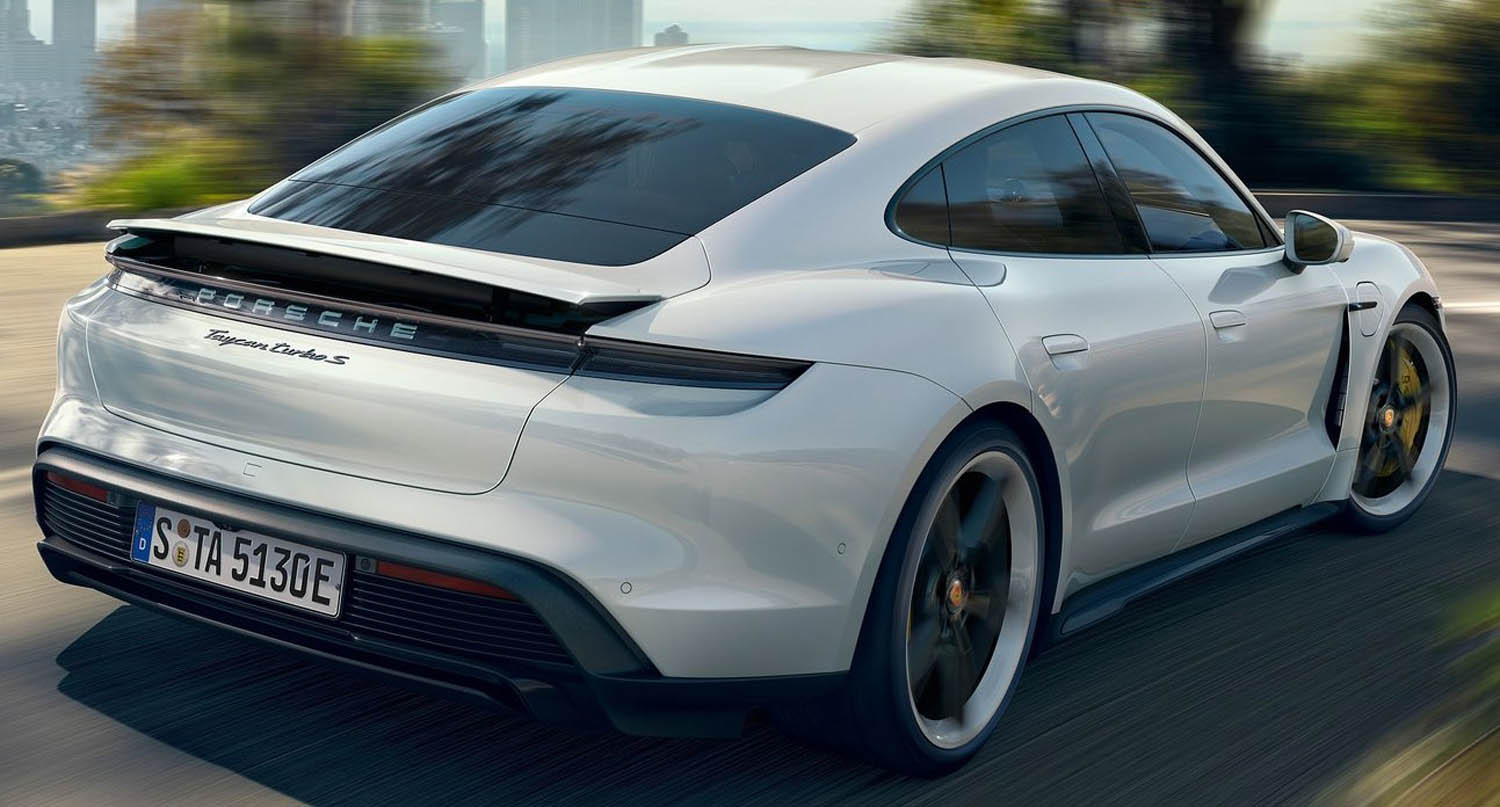 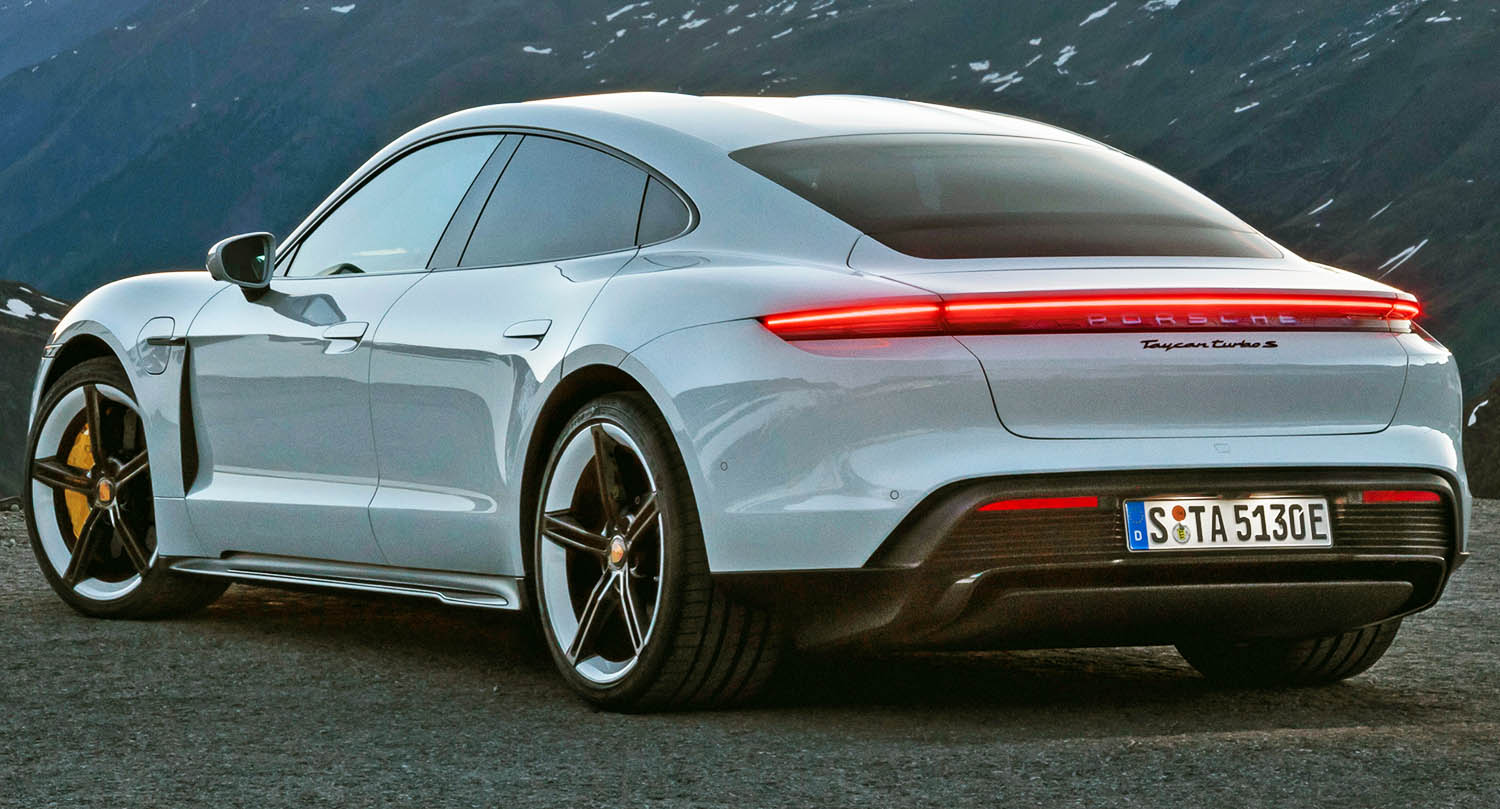 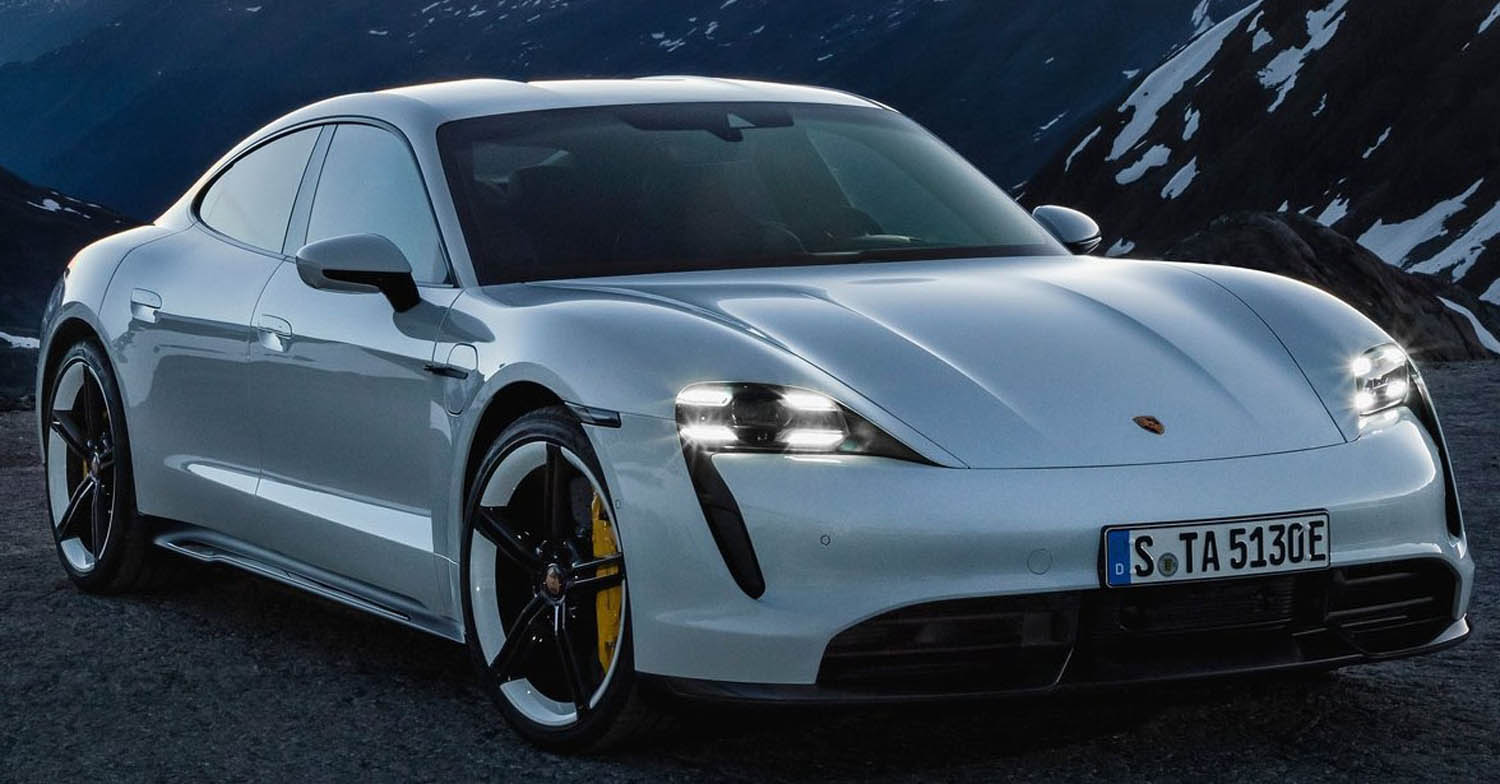 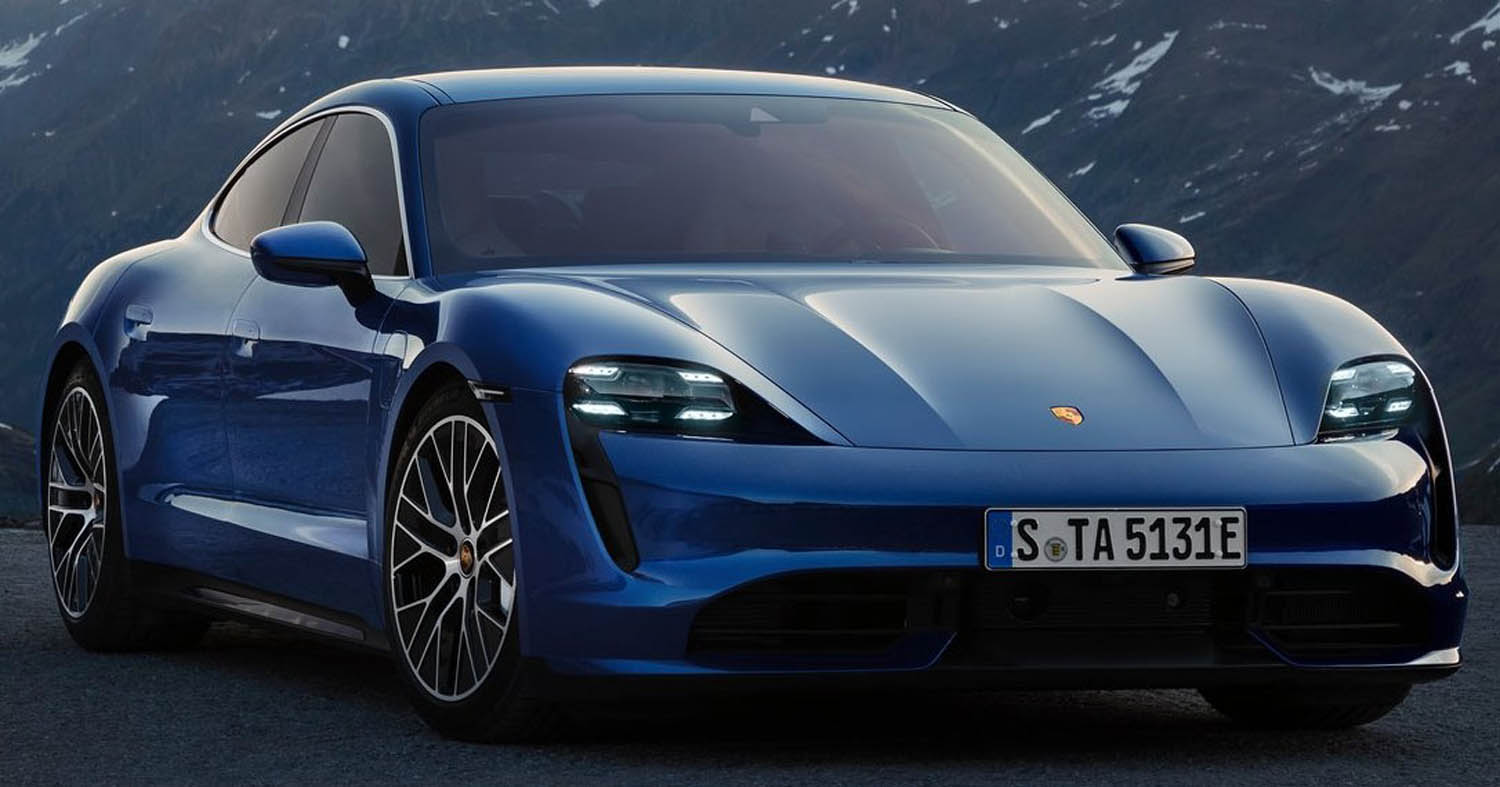 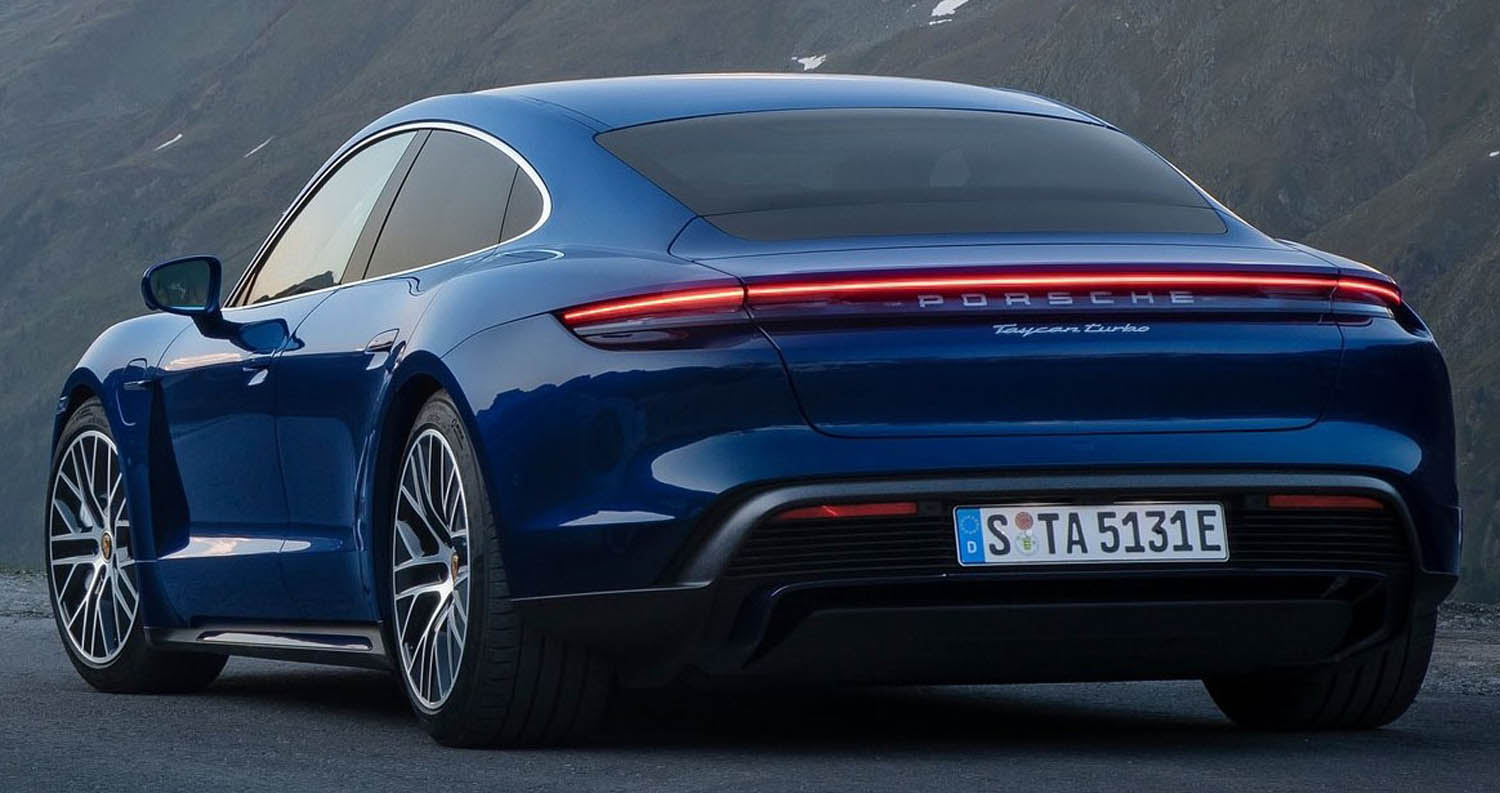 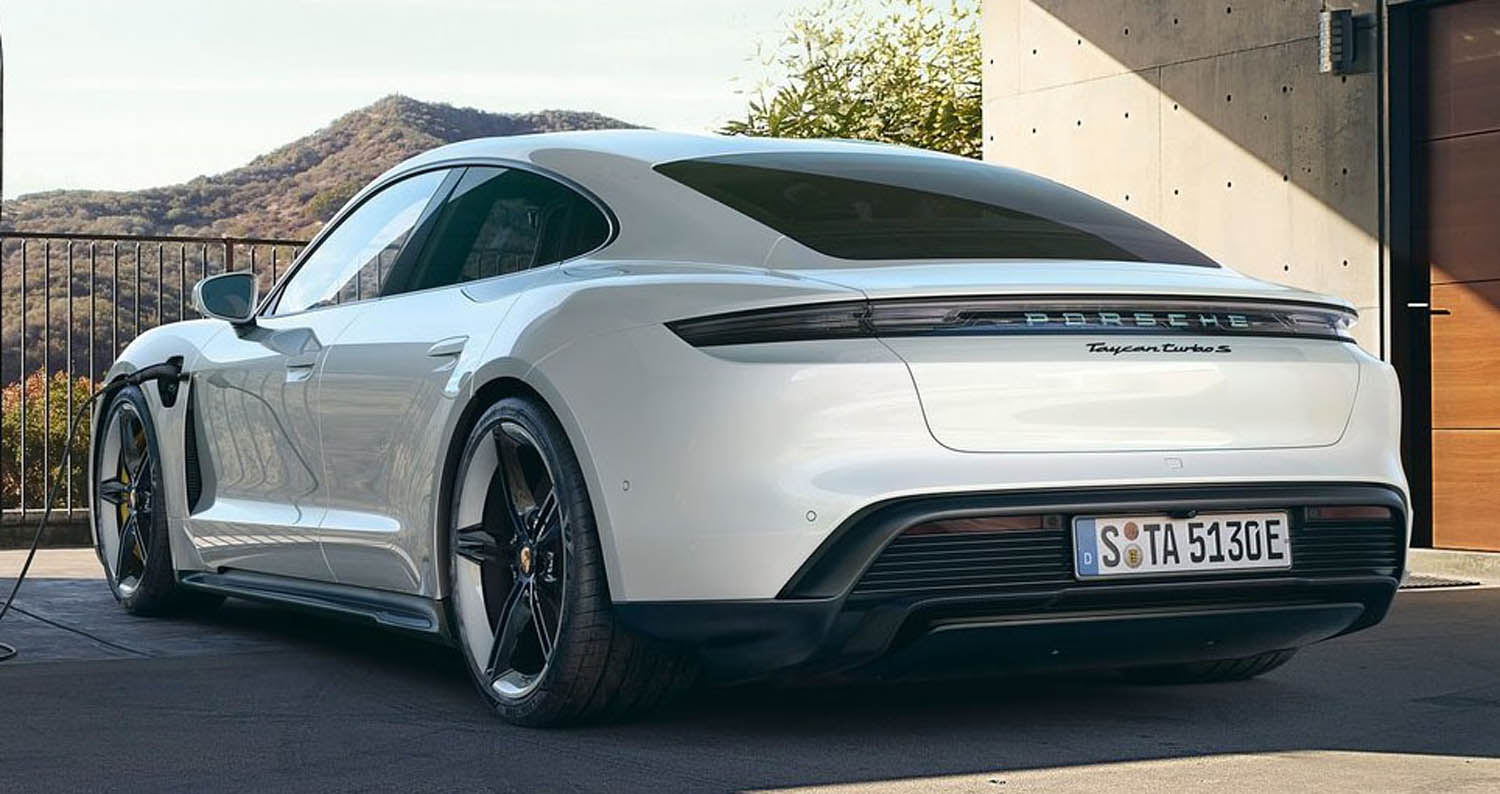 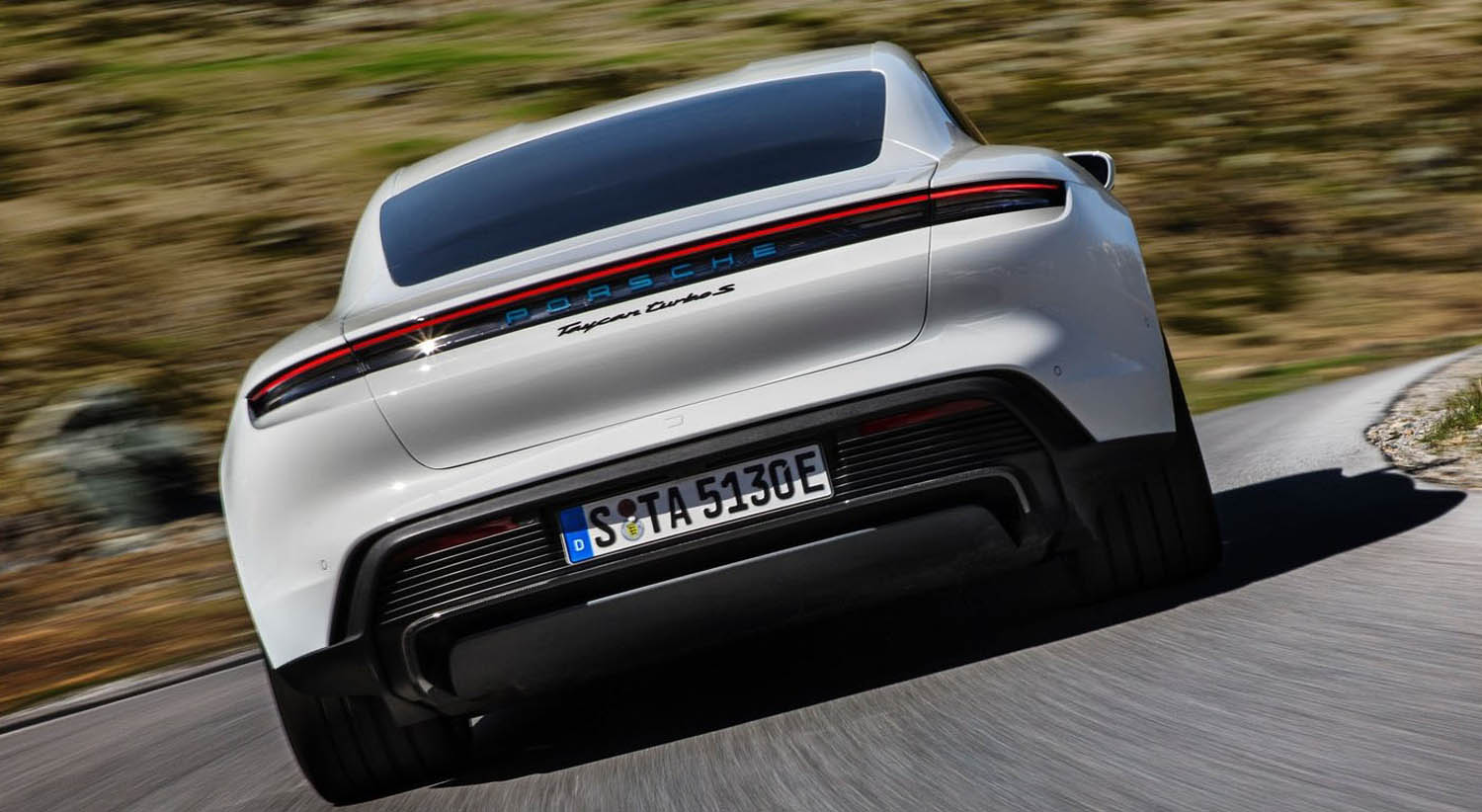 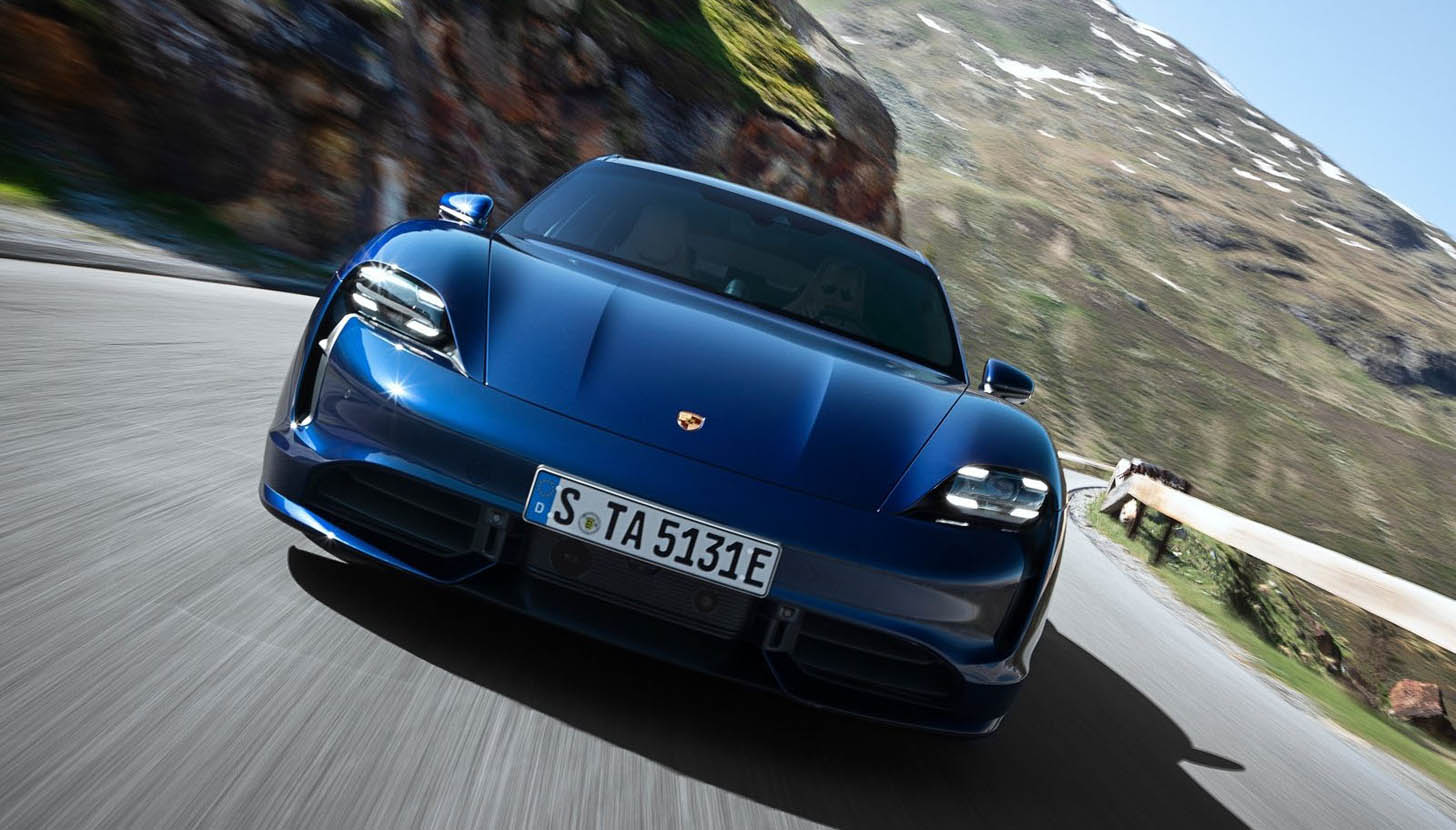 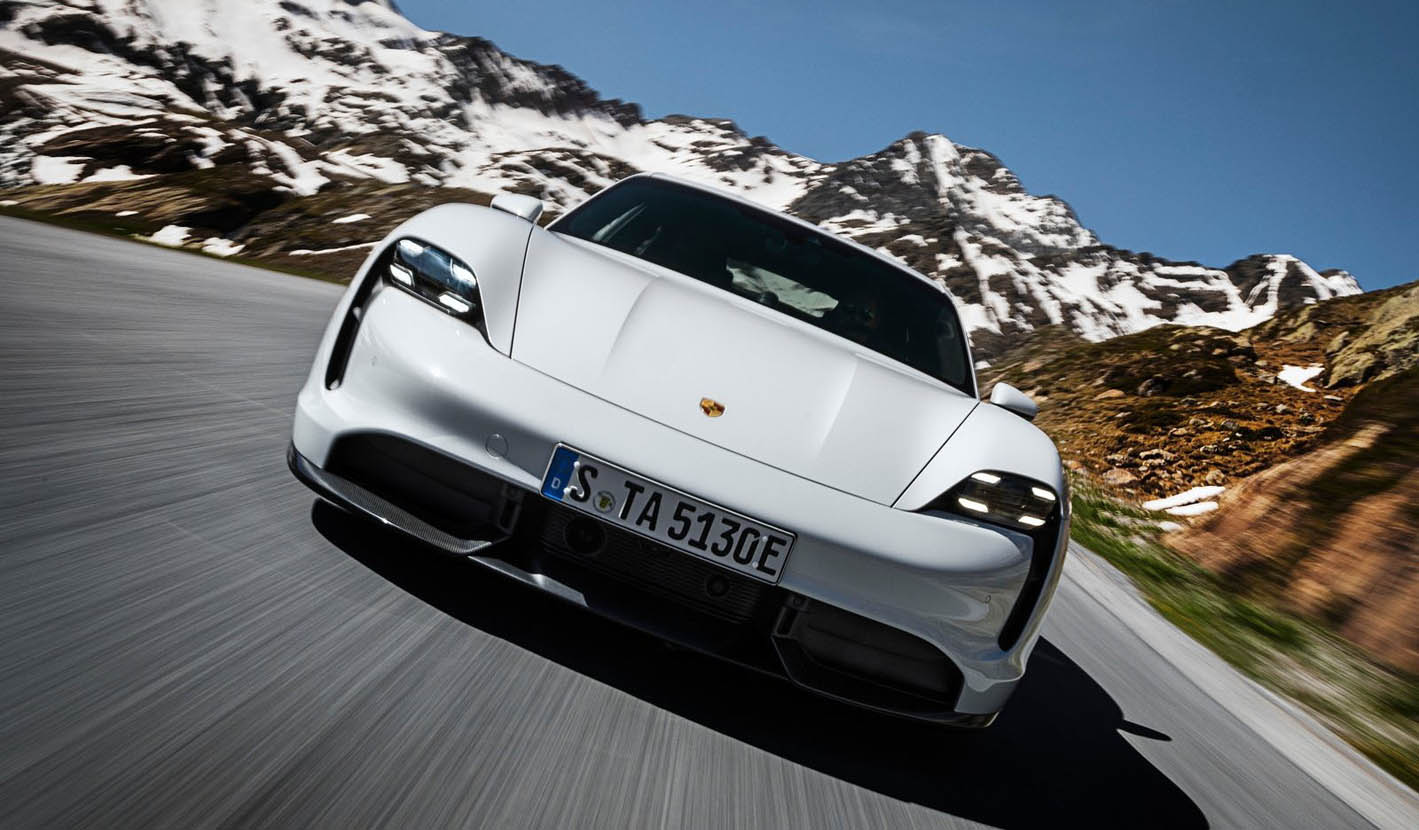 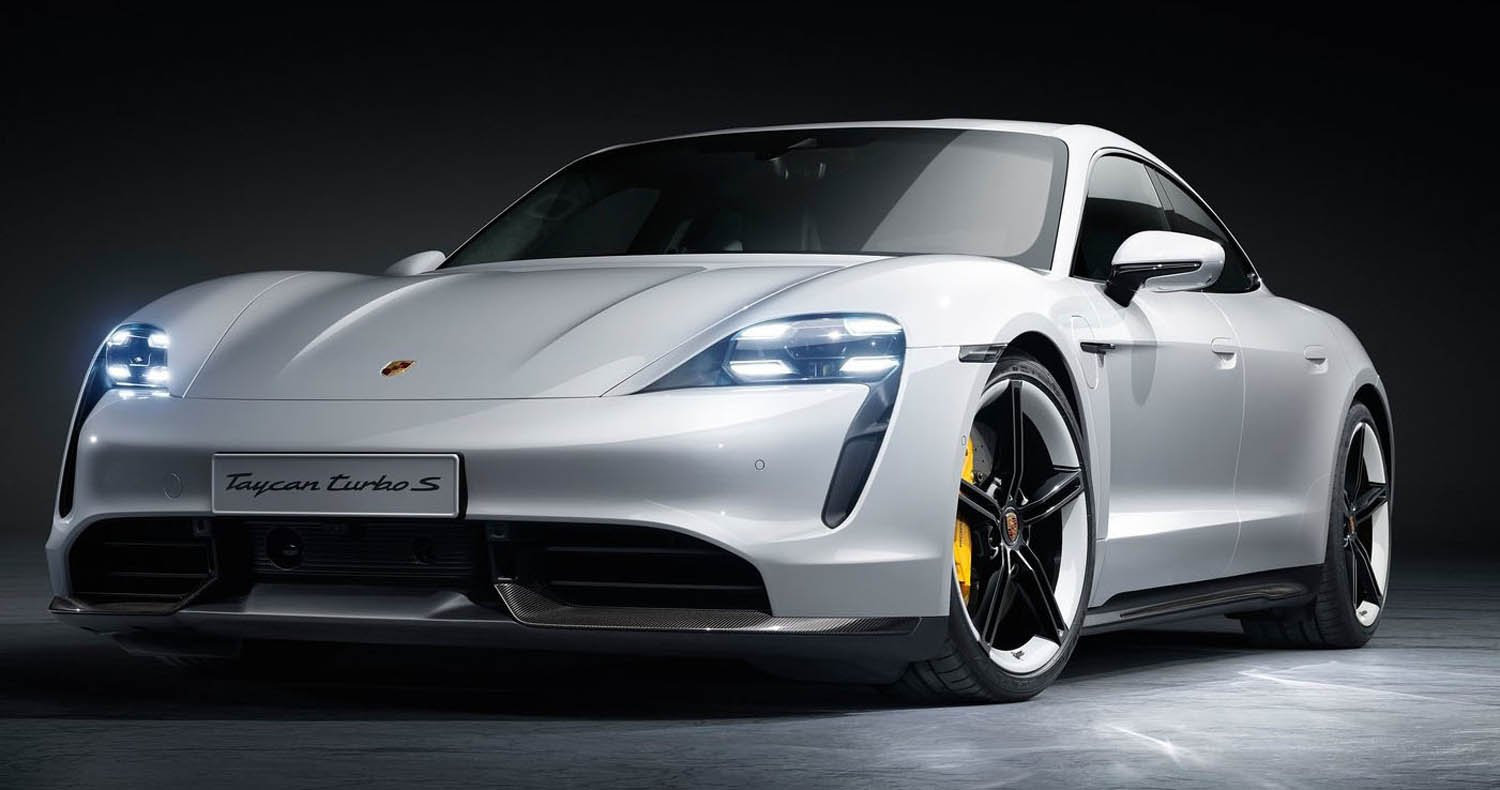 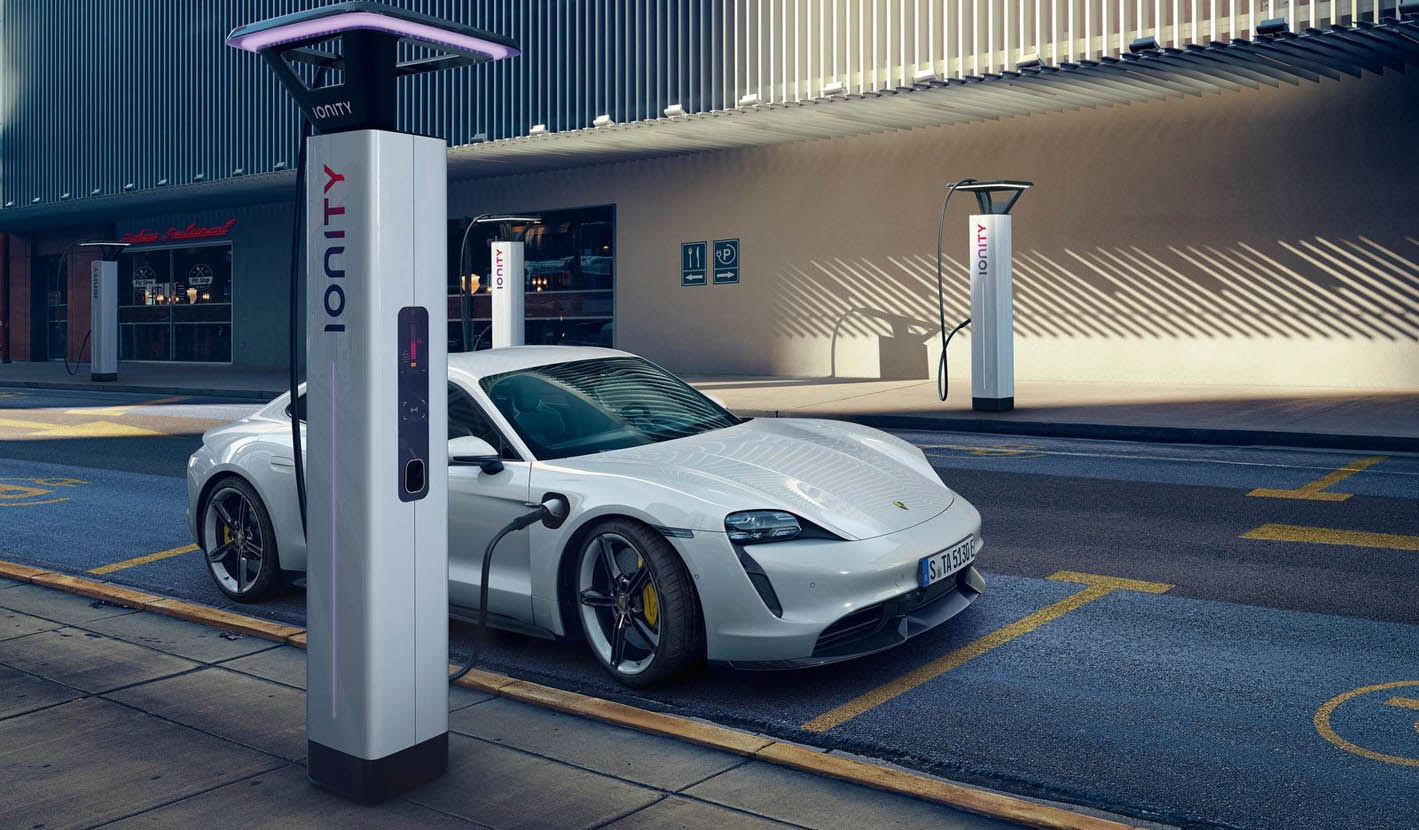 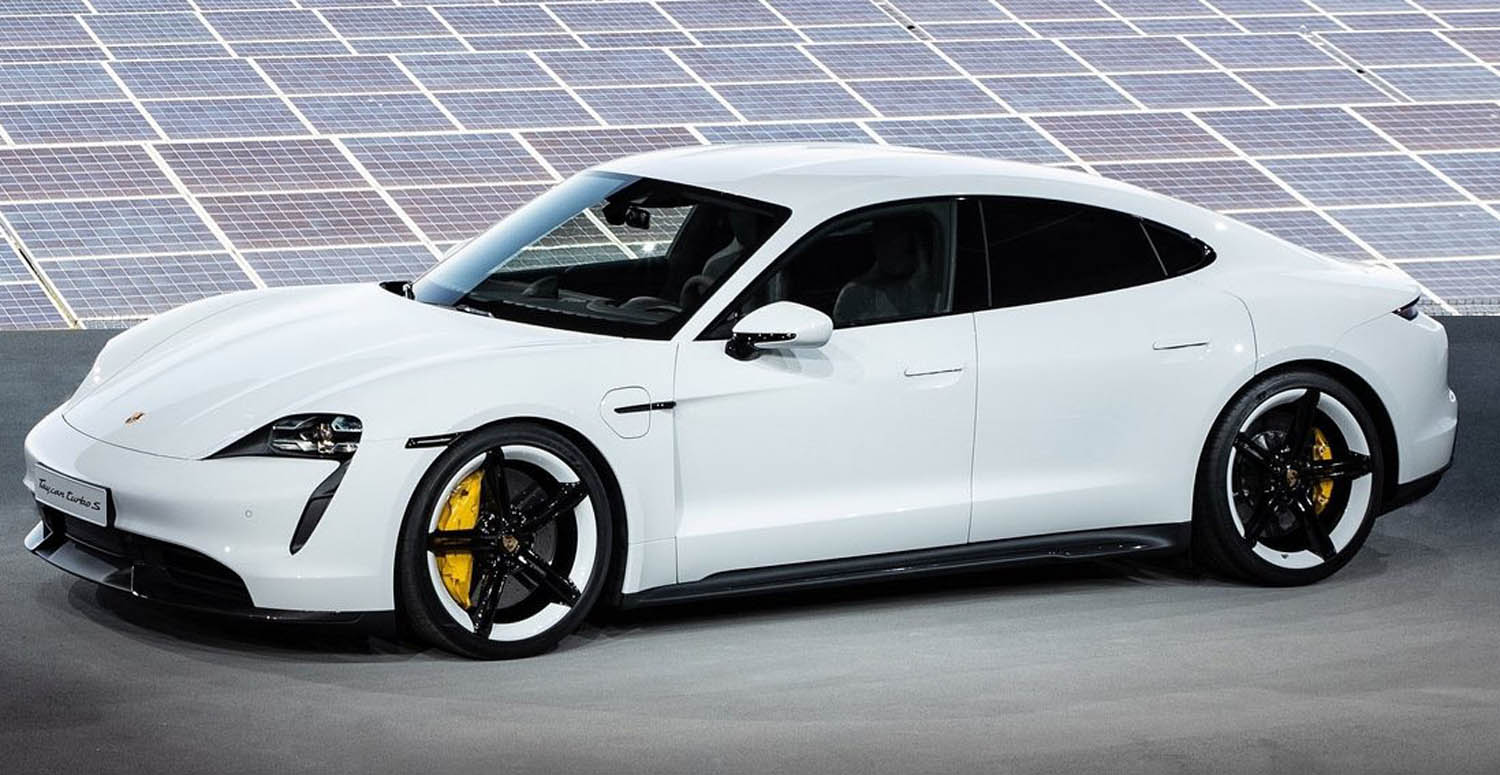 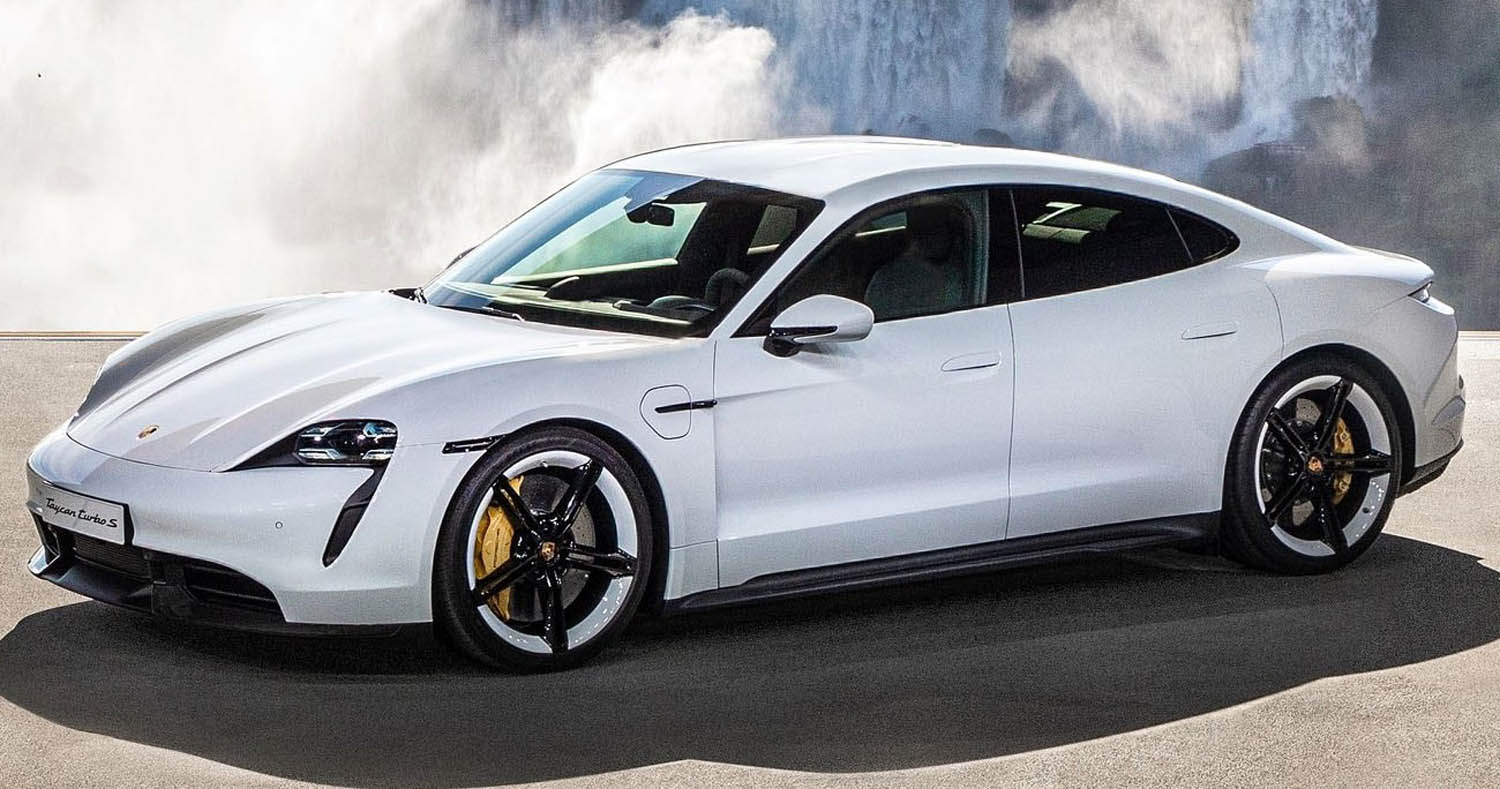 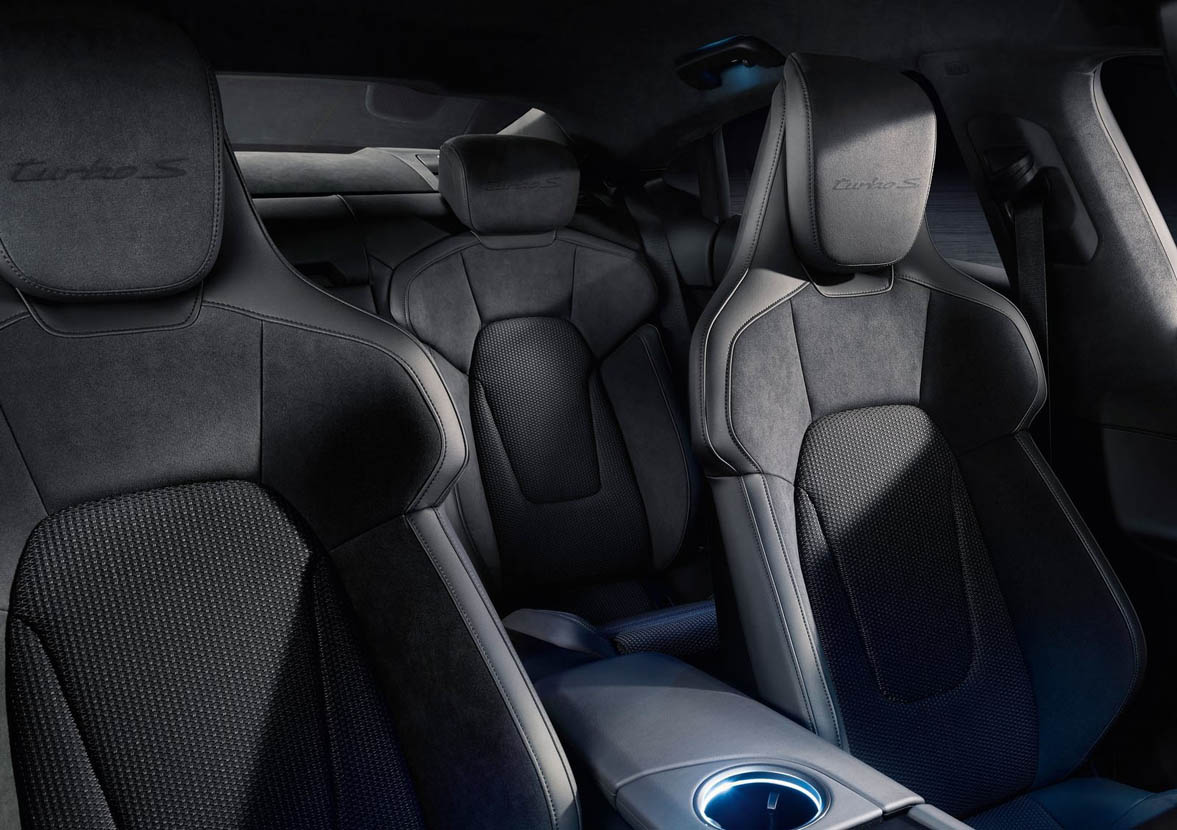 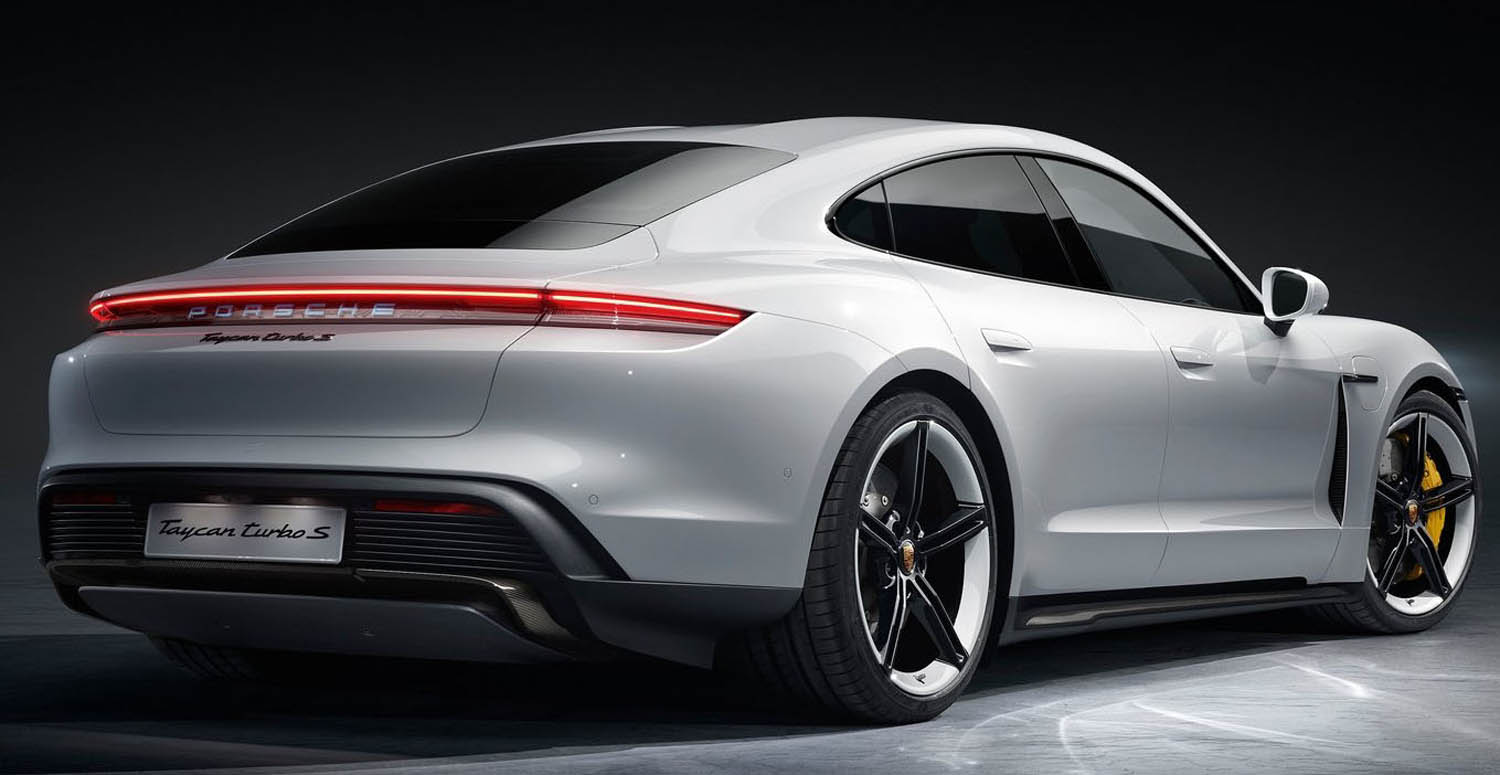 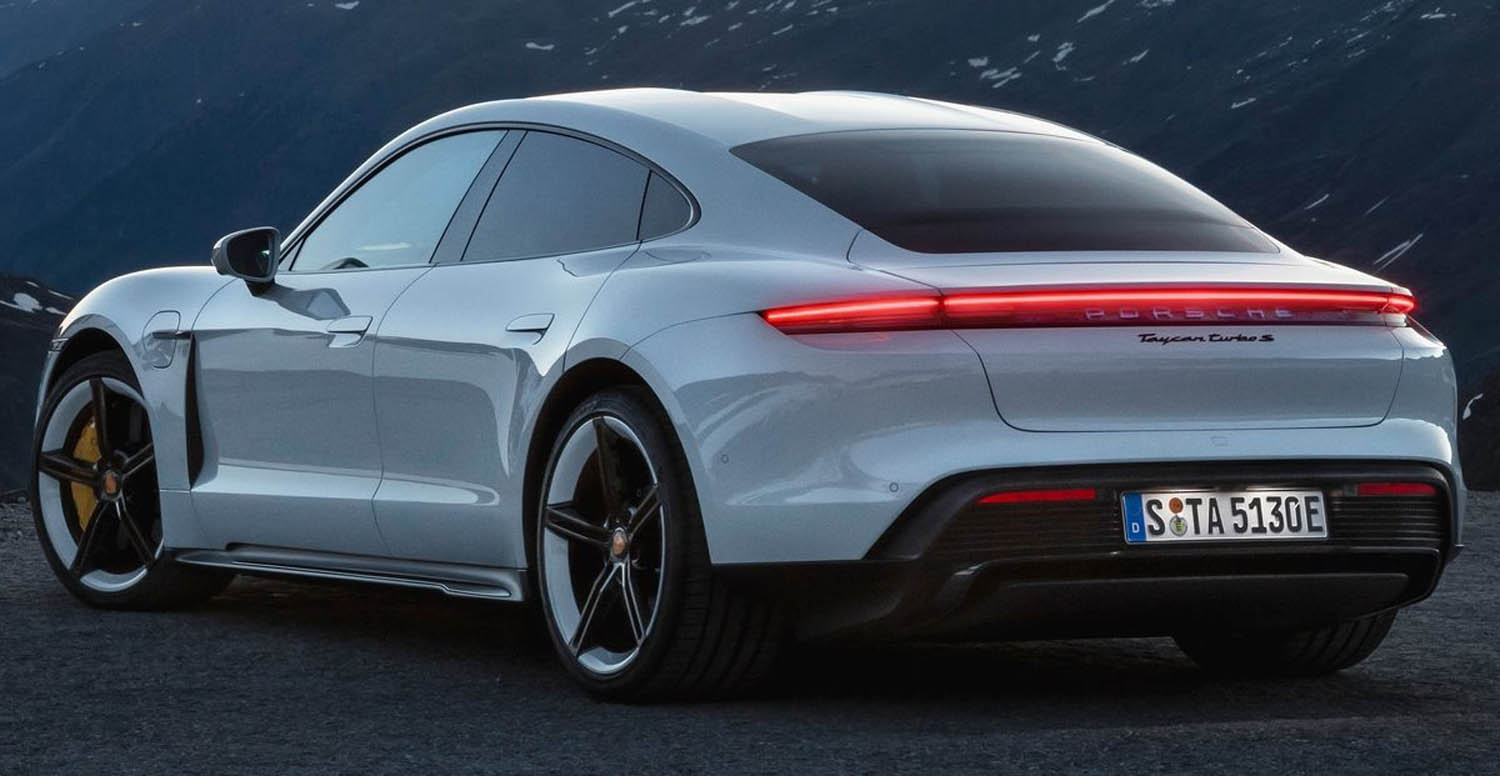 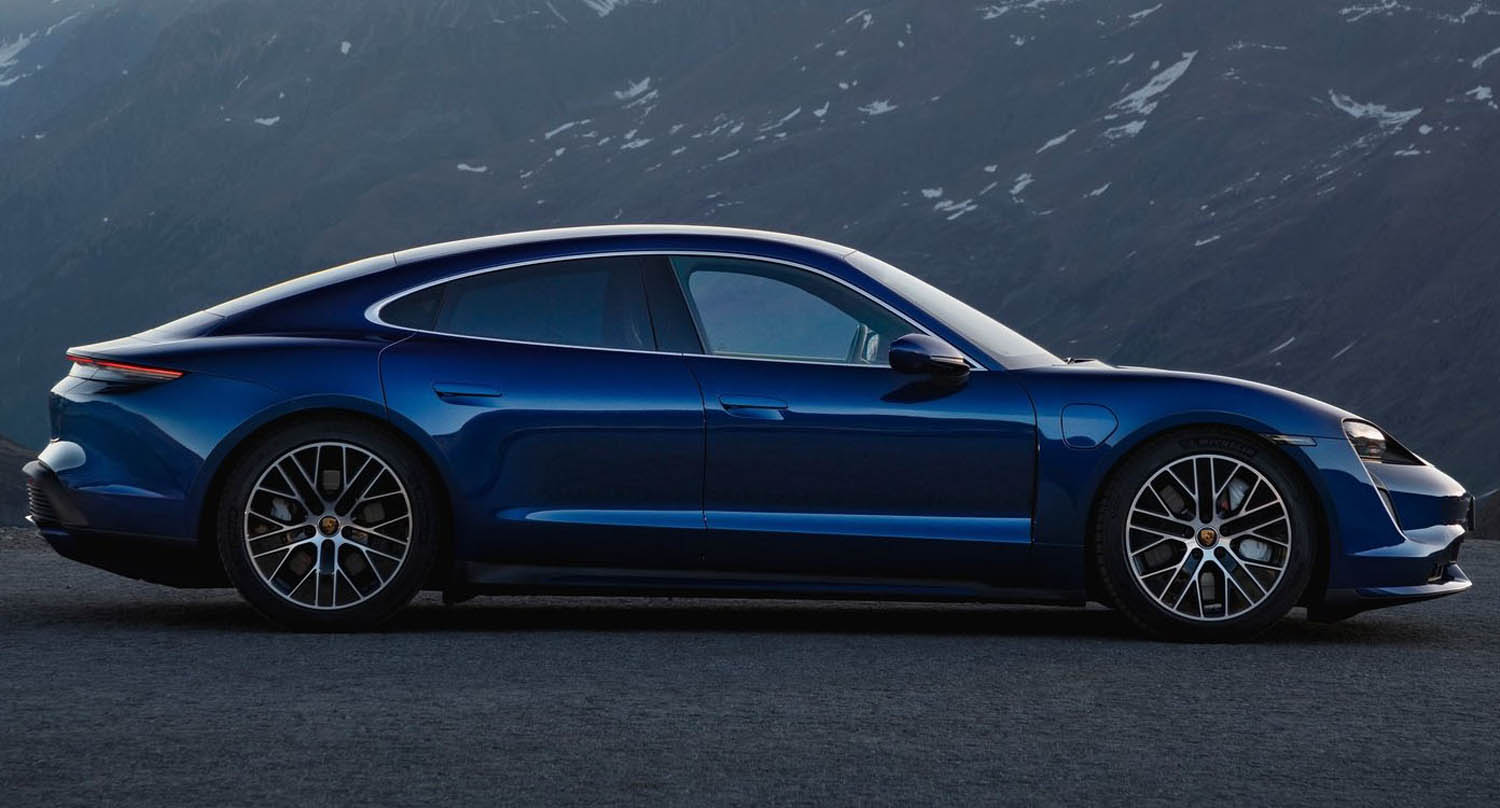 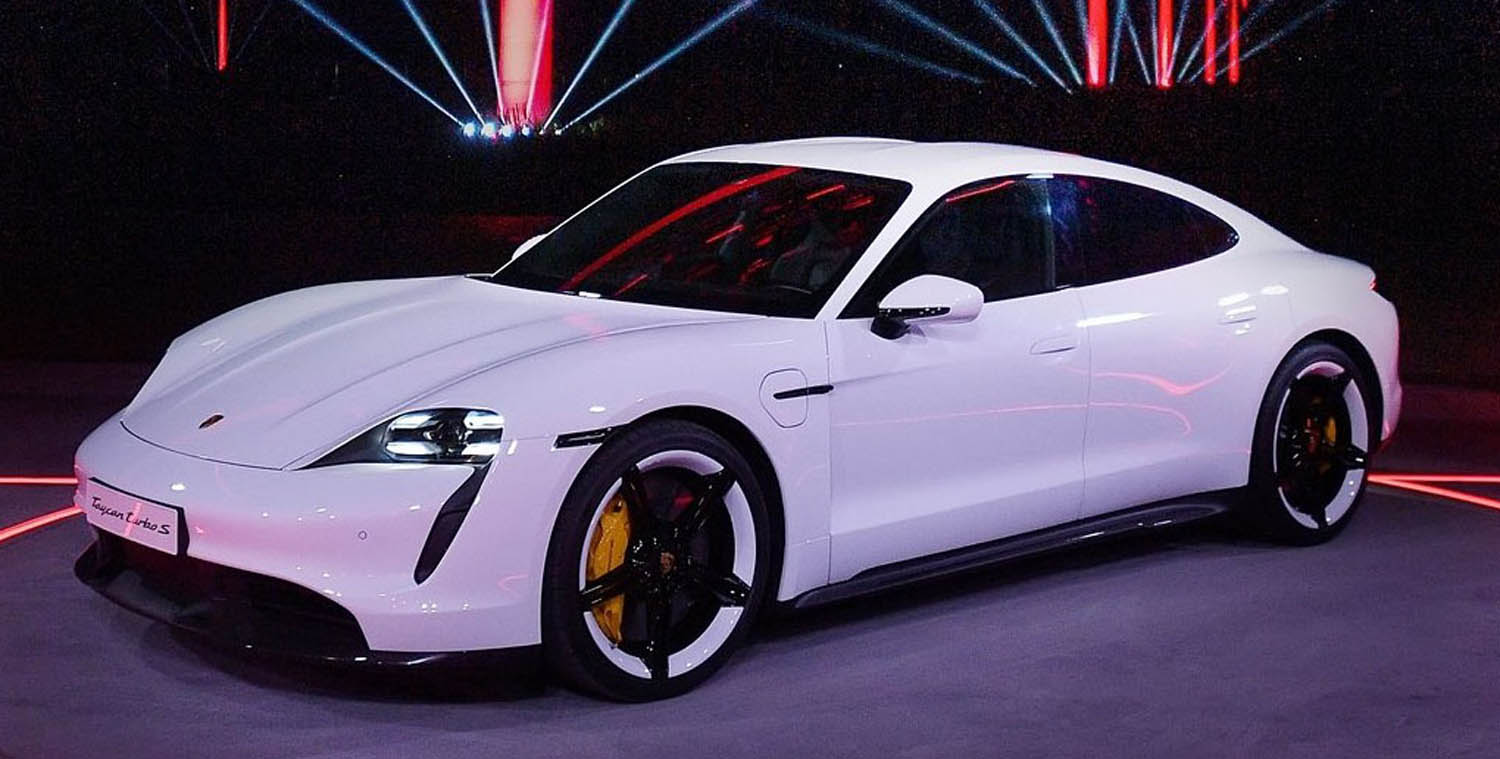 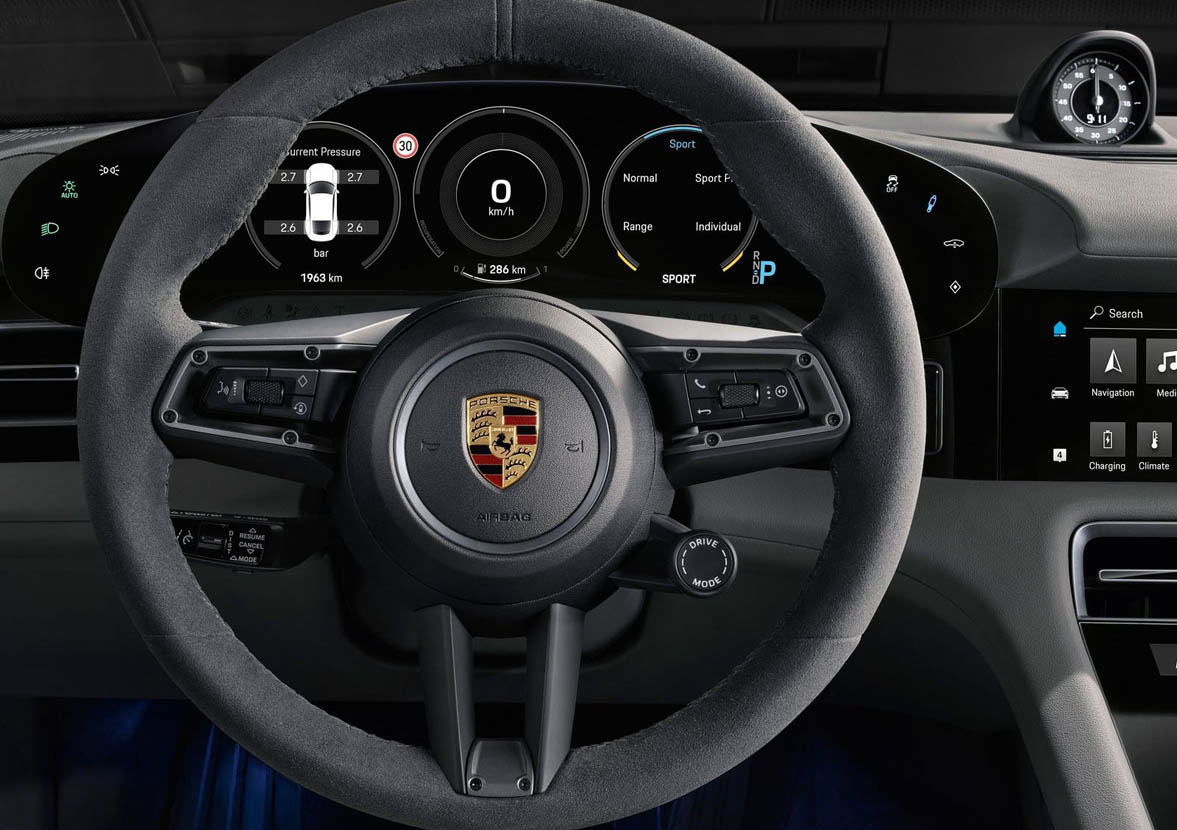 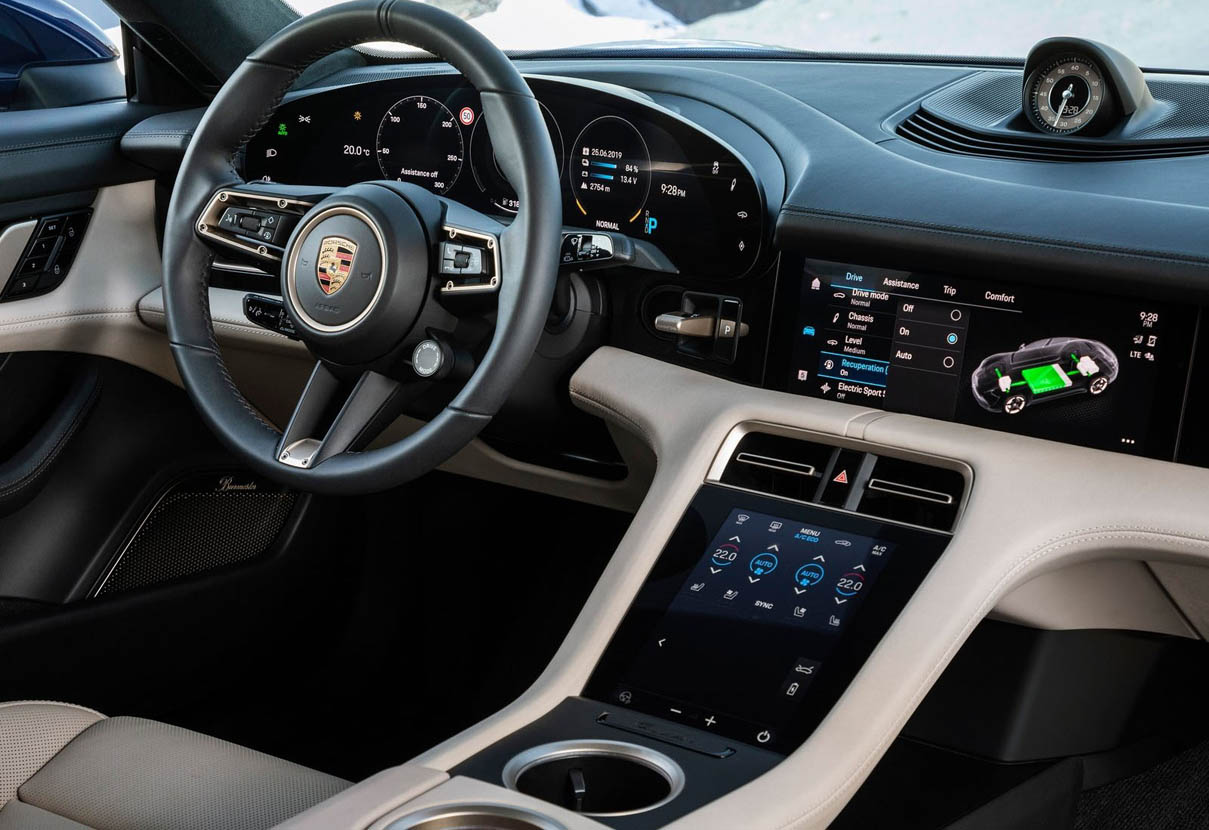 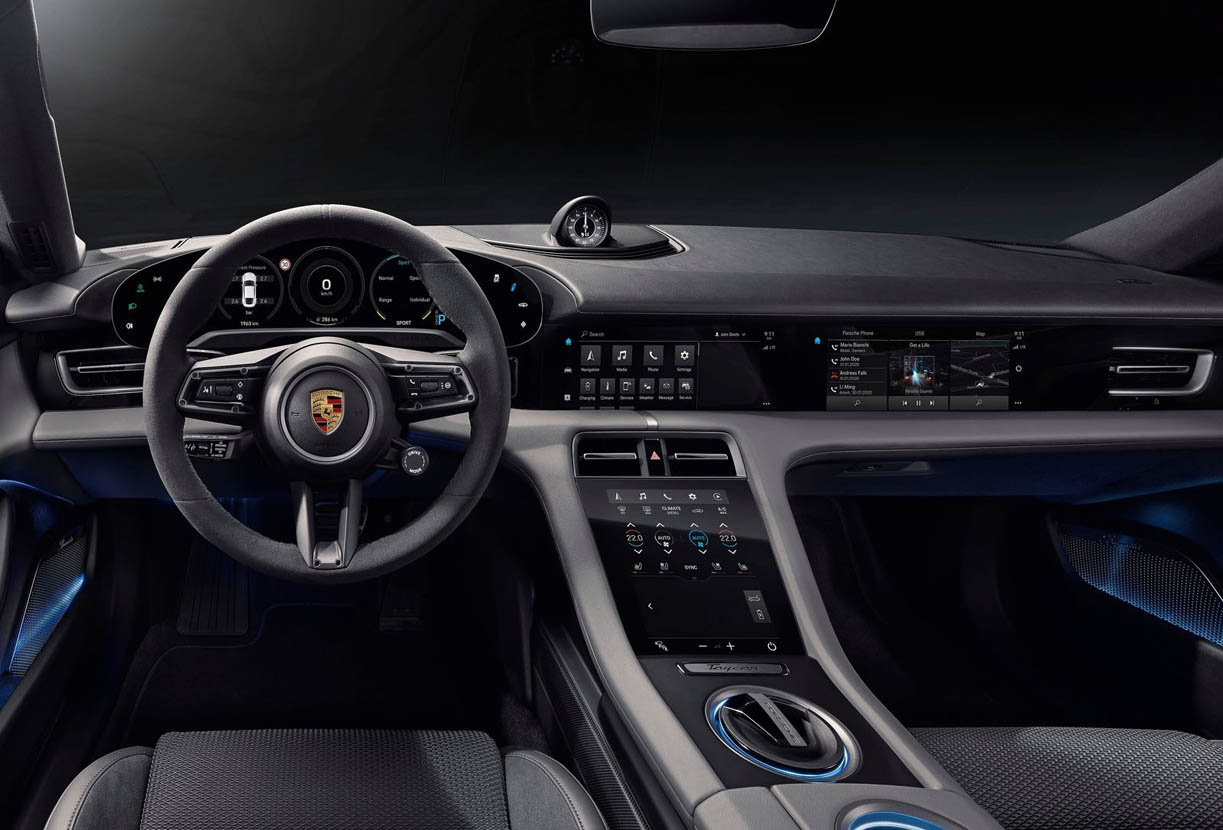