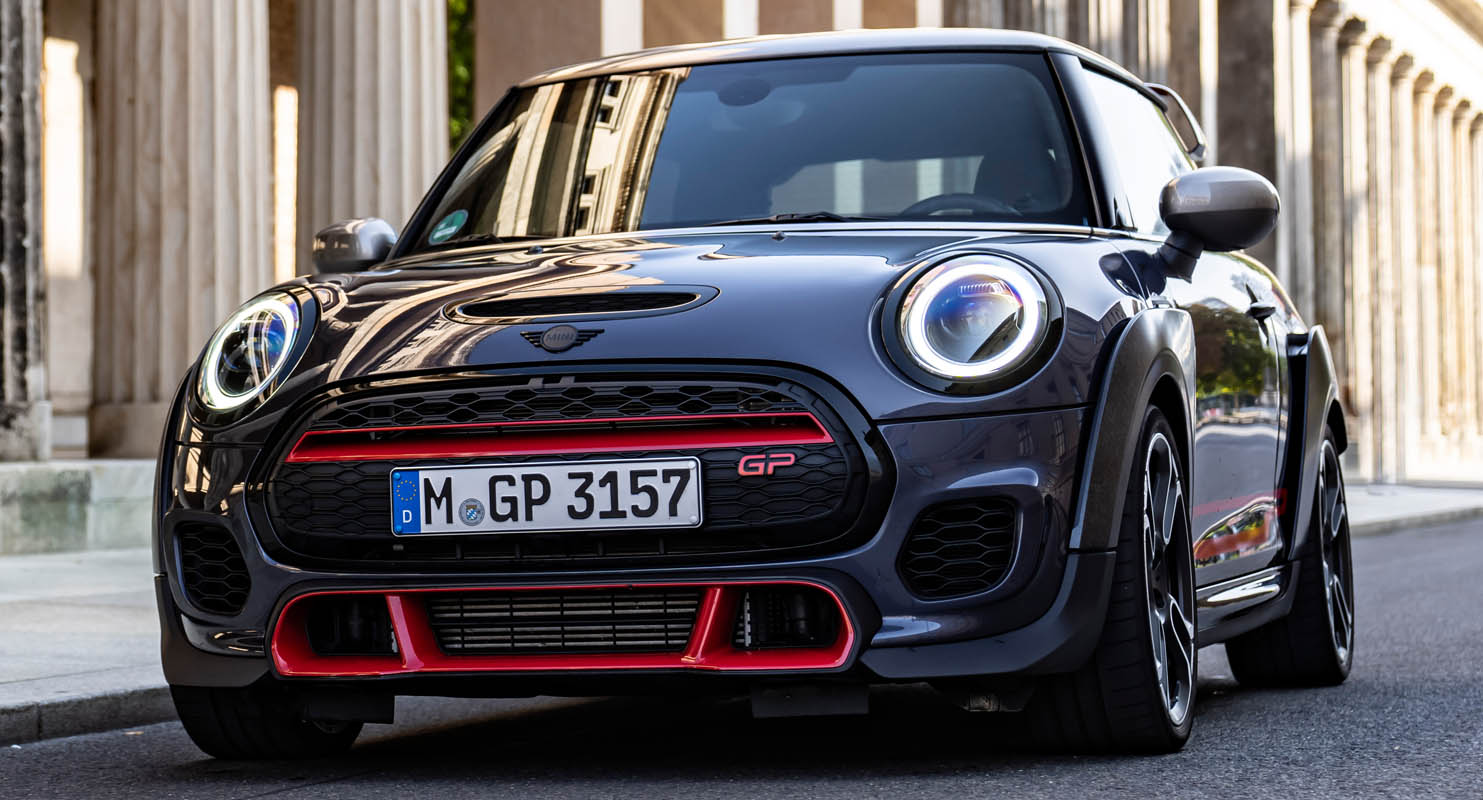 The atmosphere crackles – something is in the air of Berlin. On the Glienicke Bridge, passers-by are amazed. Agent exchange? No, there was something like that before, actually, only three times between 1962 and 1986. Now it is the MINI John Cooper Works GP (fuel consumption combined: 7.3 l/100 km; CO2 emissions combined: 167 g/km according to WLTP) that catches the eye. The fastest MINI ever built is also rarely seen. The 225 kW/306 hp model was built in a small series of only 3000 units.

The MINI John Cooper Works GP is actually too spirited for city traffic. But its agile handling characteristics and compact dimensions are extremely helpful in the hustle of the metropolis with its almost four million inhabitants. And the impressive charisma, which is provided by wheel arch trims made of carbon, a roof spoiler with double-wing contour, 18-inch lightweight forged wheels and a model-specific suspension with vehicle lowering, fits perfectly into the image of a city where big appearances play a big role.

The most modern top sports car in the model range of the traditional British brand approaches the capital from the south-west, where history and modernity merge in a unique way. And this already begins on the Glienicke Bridge, which has been still a simple wooden bridge 350 years ago. But due to the growing volume of traffic it became part of one of the most important connecting routes between the residential cities of Berlin and Potsdam. Today, the route leads via Königsstraße to the city motorway 115 through Grunewald. This is where the “Automobile Traffic and Practice Road” was opened 100 years ago. In its original layout of around 19 kilometres, the AVUS connected today’s exhibition grounds near the Charlottenburg district and Nikolassee near Zehlendorf with two straights and a north and a south curve.

Race track operations were discontinued in 1998, and the striking administration building on Messedamm and the 200-metre-long spectator grandstand are listed buildings now. Today the MINI John Cooper Works GP brings back a little racing feeling. Its four-cylinder turbo engine accelerates it from a standstill to 100 km/h in 5.2 seconds. The precisely controllable sports brake system with four-piston fixed calliper disc brakes on the front wheels guarantees equally dynamic deceleration maneuvers. In fast bends, the aerodynamically optimised design features ensure reduced lift, while a top speed of 265 km/h is possible on long straights. In theory, anyway, because today the speed limit on the AVUS is 100 km/h.

On the Teufelsberg, which is very close to the former Nordkurve, visitors have a great view over the Grunewald and Berlin – no wonder, at 120.1 metres, the Teufelsberg is the second highest elevation in the city. Contemporary spray art can also be admired there. Hundreds of small and large murals have been created on the walls of a former radar station over the past decades.

After a brief stop at the Olympic Stadium, the MINI John Cooper Works GP heads for the Mitte district. On Bundesstraße 2, the 67-metre-high Victory Column soon comes into view. The MINI circles the “Großer Stern” (Great Star) once (or twice or three times?), as the partially five-lane roundabout is called, and then along the “Straße des 17. Juni” right in front of the Brandenburger Tor. Turn right once, and after just a few hundred metres the two-seater becomes an eye-catcher at Potsdamer Platz. Europe’s first traffic lights were located there in 1924. At that time, this intersection was one of the busiest places in the old world. The contrast was all the greatest when Potsdamer Platz became a no-man’s land after the Second World War as a place between the American and Soviet occupation zones. After the fall of the Berlin Wall, however, the historic square quickly became a vibrant hotspot again.

From modern Potsdamer Platz, the path leads to the Kreuzberg district and there to a historic shopping opportunity. Market Hall 9 on Eisenbahnstraße was opened 130 years ago. There was space for 300 stalls, each four square metres in size, to supply the people with fresh goods. It is one of 14 Berlin market halls that were built in the second half of the 19th century. Today, “shopping differently” and “eating differently” are now taking part. Traders and customers value seasonal products and regional sources.

From Kreuzberg, all it takes is a short hop across the Spree or a brisk ride over the Oberbaum Bridge to reach one of Berlin’s most visited tourist spots, the East Side Gallery. It was opened in September 1990 and comprises the longest remaining section of the Berlin Wall. 118 artists from 21 countries created the world’s longest open-air gallery on 1.3 kilometres of the former border after the fall of the Wall.

If you now follow the Spree, you will arrive at Alexanderplatz and from there via the magnificent boulevard “Unter den Linden”, past the TV Tower, the Berlin Cathedral, the Gendarmenmarkt and the Humboldt Forum in the rebuilt City Palace directly into the government district. History and the present are very close together here between the Reichstag building, the main railway station, the Chancellery and Bellevue Palace, the seat of the Federal President.

On the way through Charlottenburg and to the International Congress Centre (ICC), the driver of the MINI John Cooper Works GP has to decide. Either he takes another trip over the AVUS into the Grunewald and over the Glienicke Bridge to Potsdam, or he heads north into the green countryside surrounding Berlin. The choice falls on the excursion to the Mecklenburg Seenland. Because in the middle of the Schorfheide, the MINI John Cooper Works GP can once again demonstrate what it’s made of. Europe’s largest driving safety centre has existed in Groß Dölln since 2002. The area includes not only a unique handling course, but also a 4.25-kilometre race track.

On this terrain, you can experience just how much the developers of the MINI John Cooper Works GP have used their racing know-how to create extreme driving pleasure. A particularly tight engine mount, the rigid body structure, the differential lock integrated into the 8-speed Steptronic Sport transmission and the model-specific high-performance tyres enable a fascinatingly spontaneous development of power when sprinting from a standstill and accelerating out of bends. The no less impressive lateral acceleration results, among other things, from a wide track and model-specific increased camber values for the front and rear wheels. In GP Mode, the intervention thresholds of the DSC (Dynamic Stability Control) system are also raised. This gives the driver a little more leeway when approaching the limits. GP Mode can be activated quite simply with a toggle switch. And once again there is a certain crackle in the air. 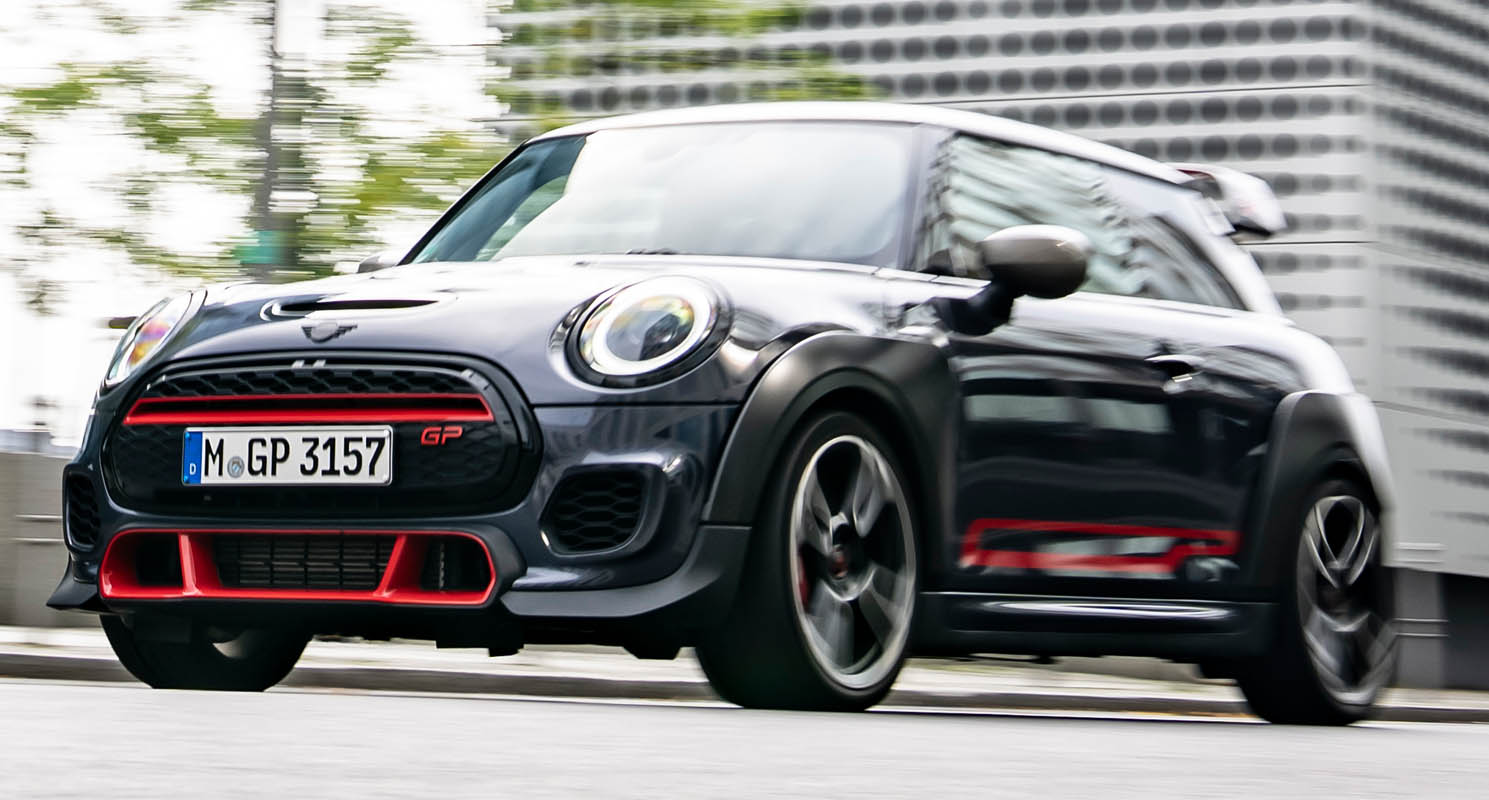 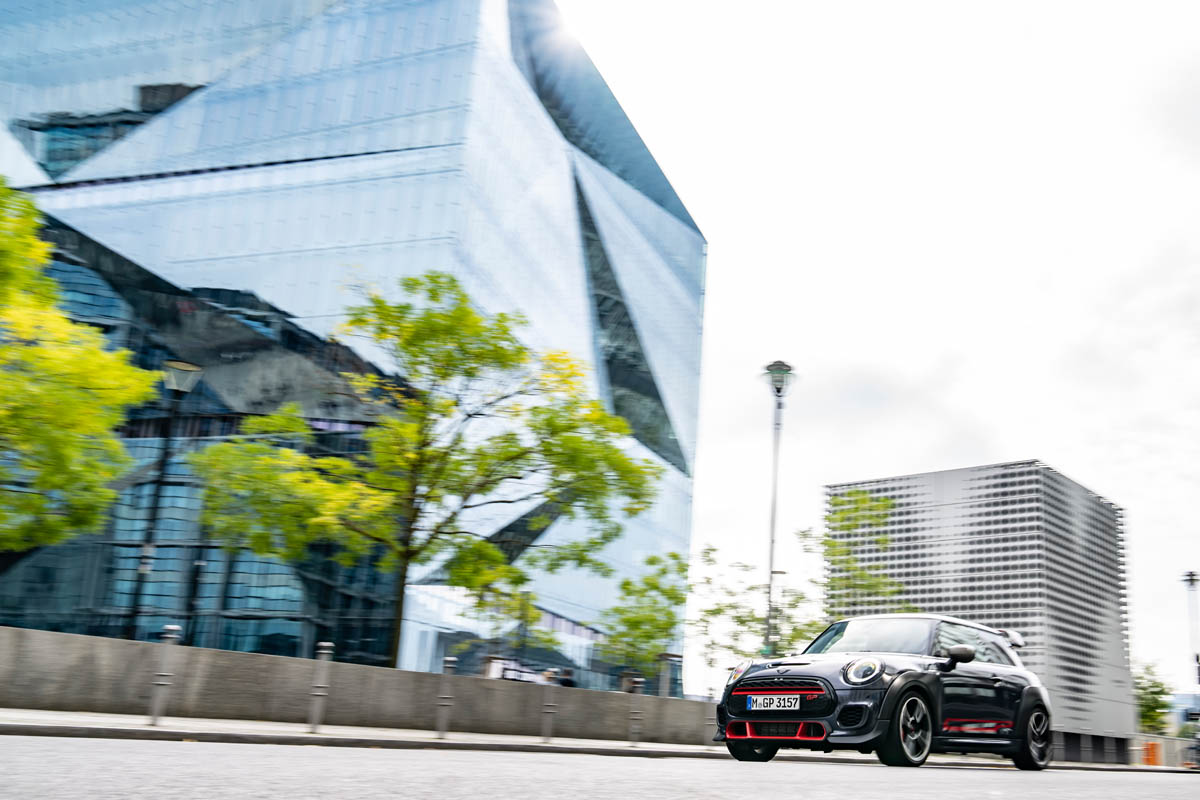 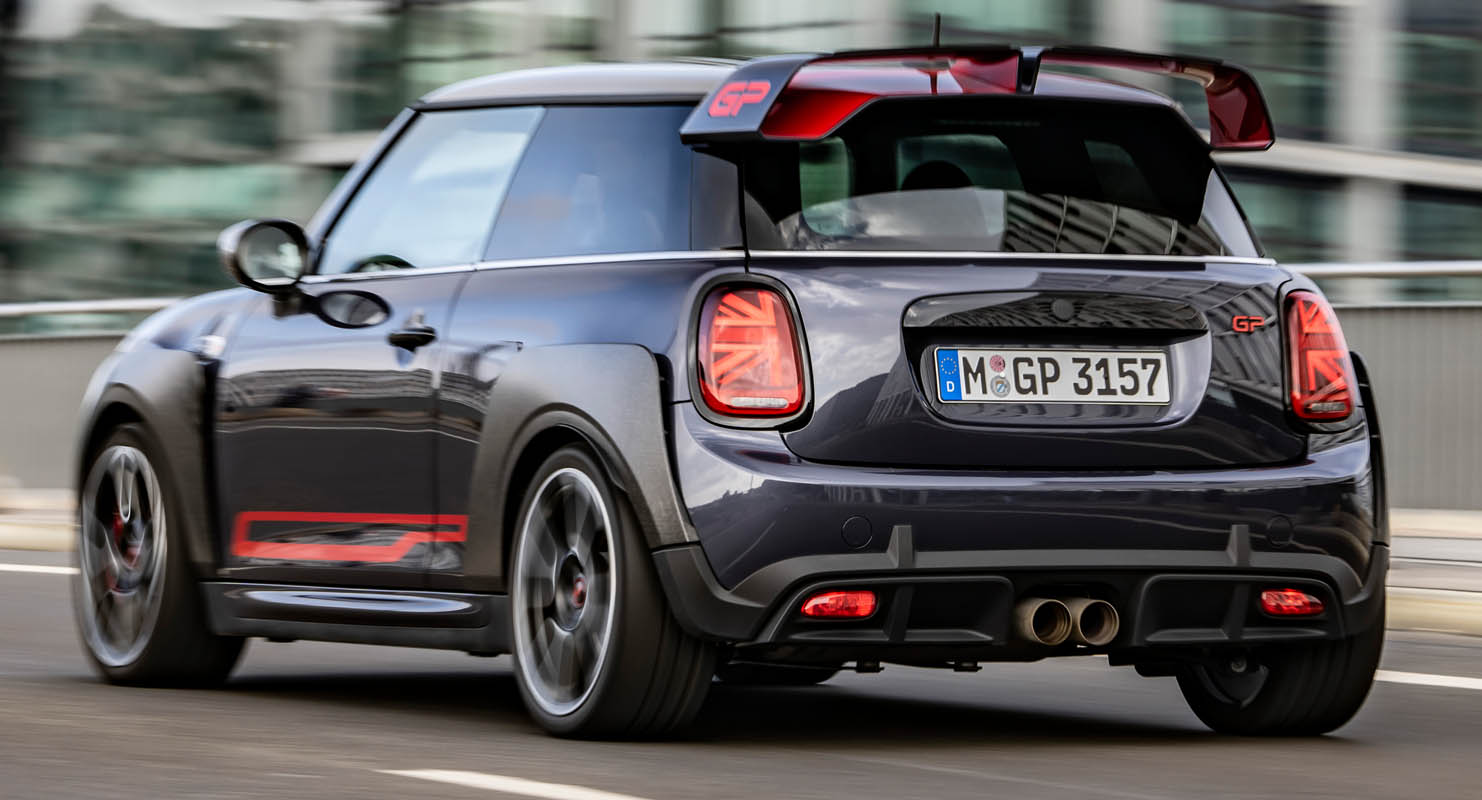 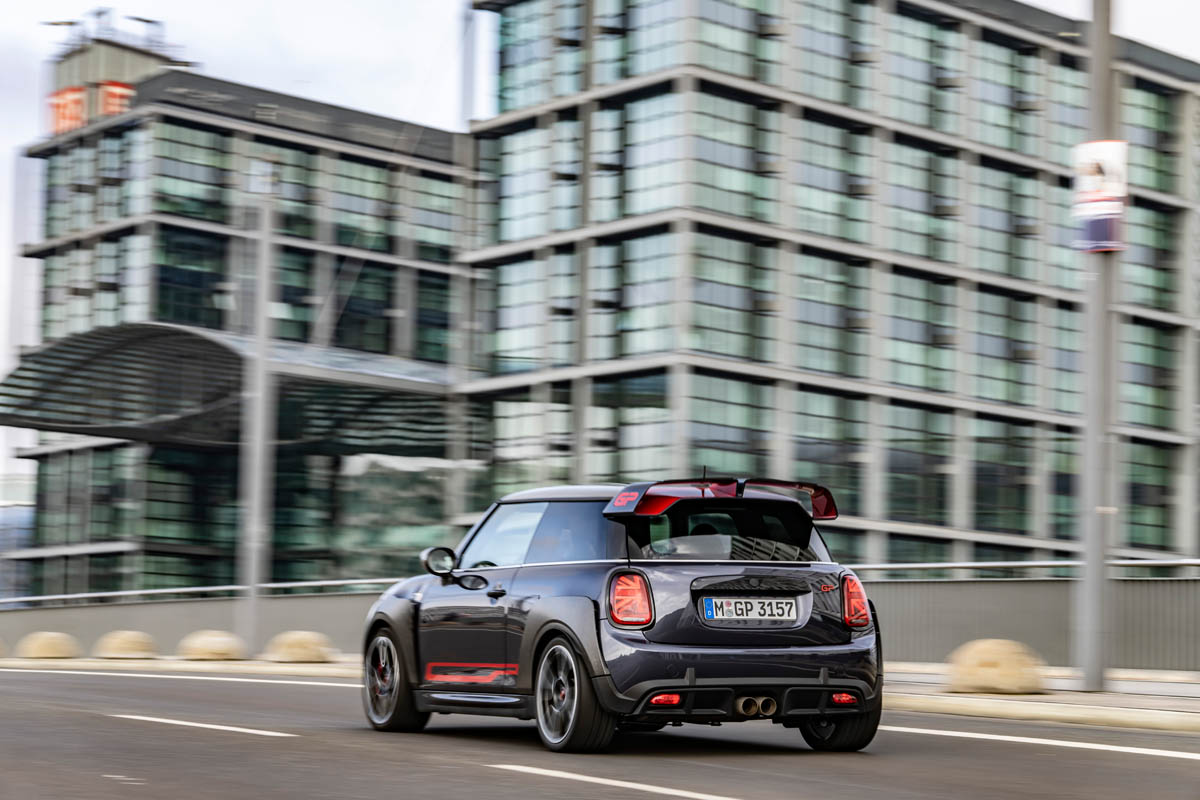 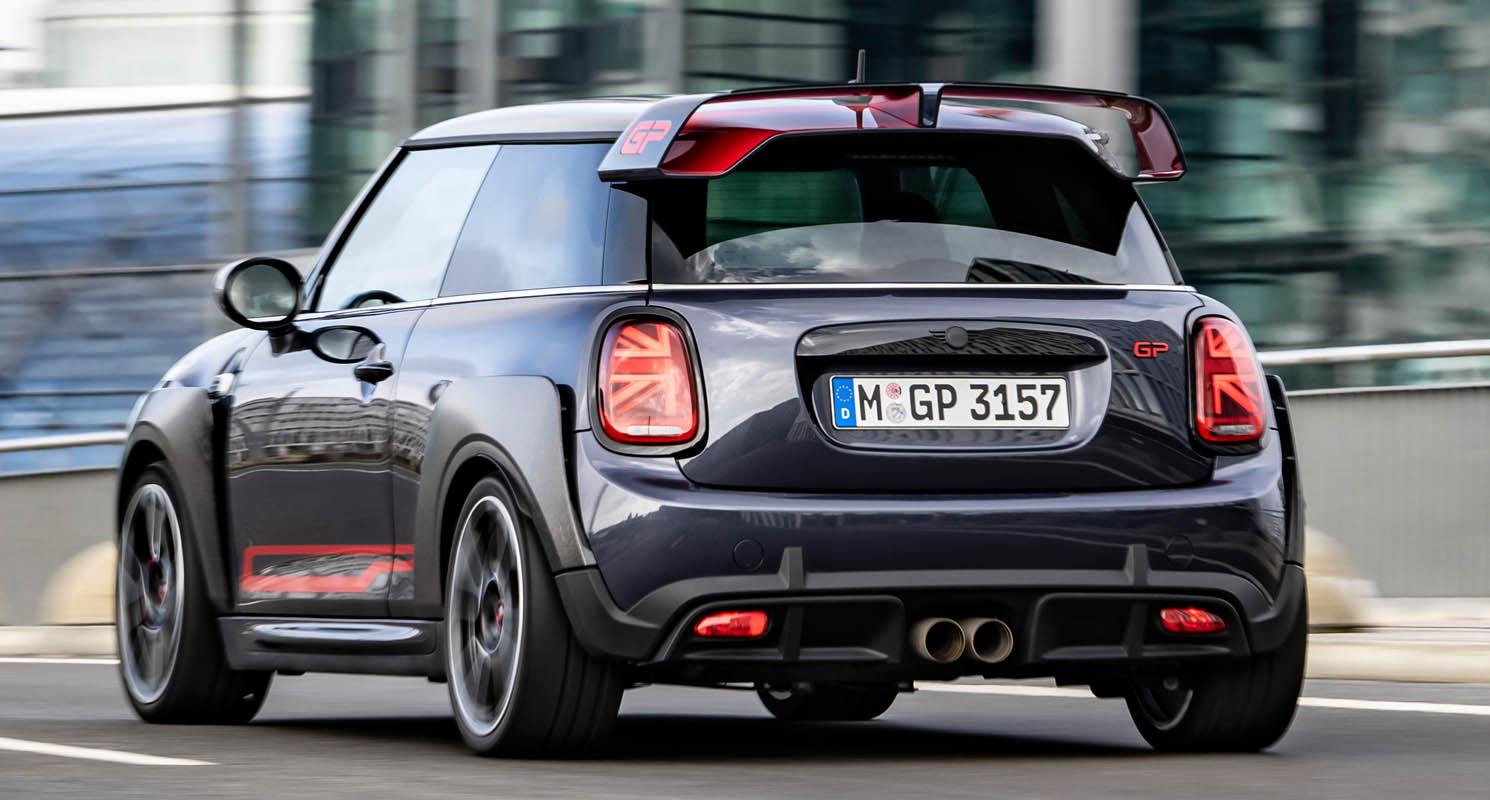 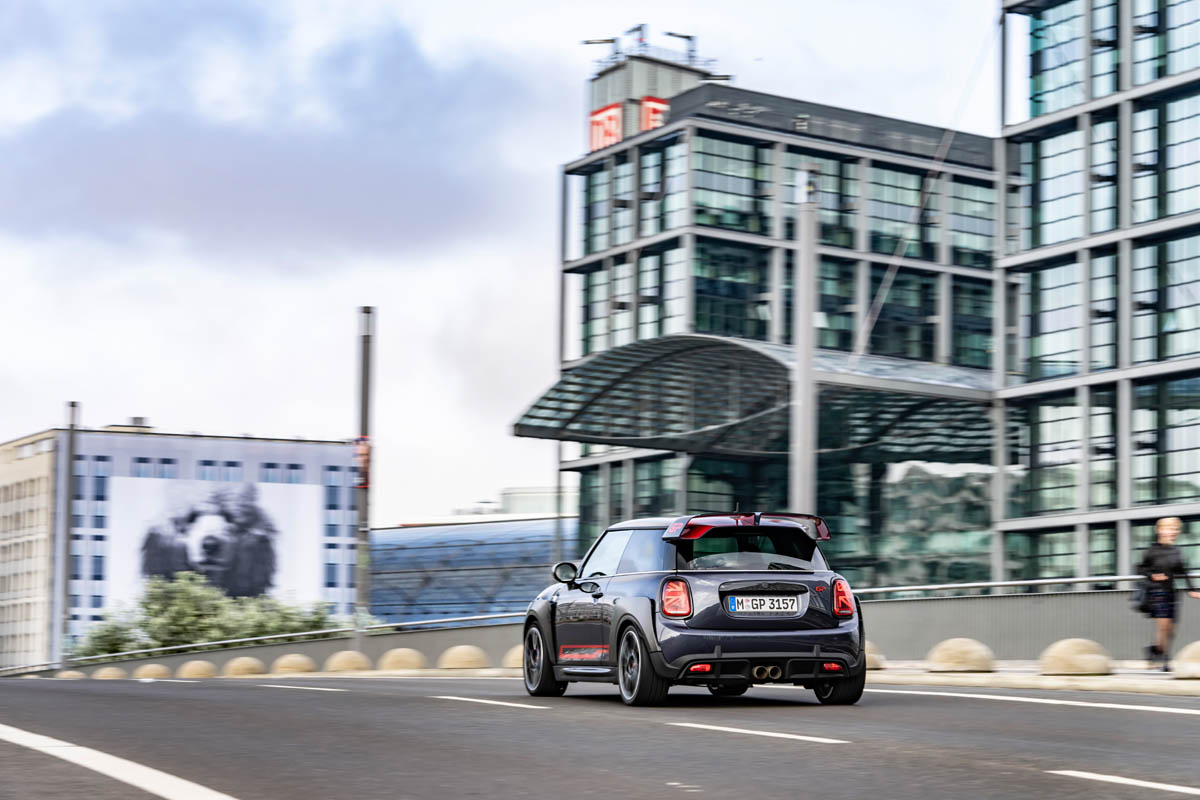 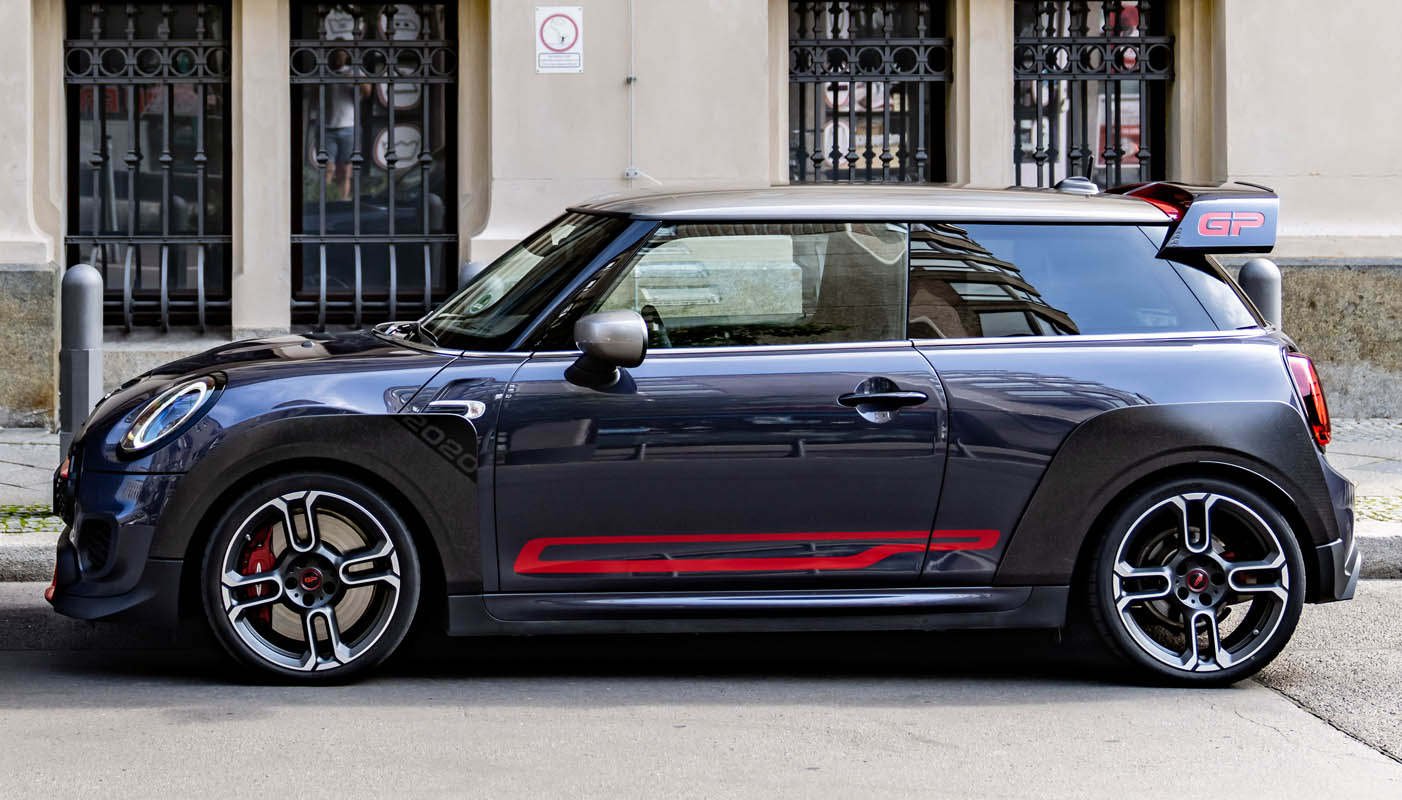 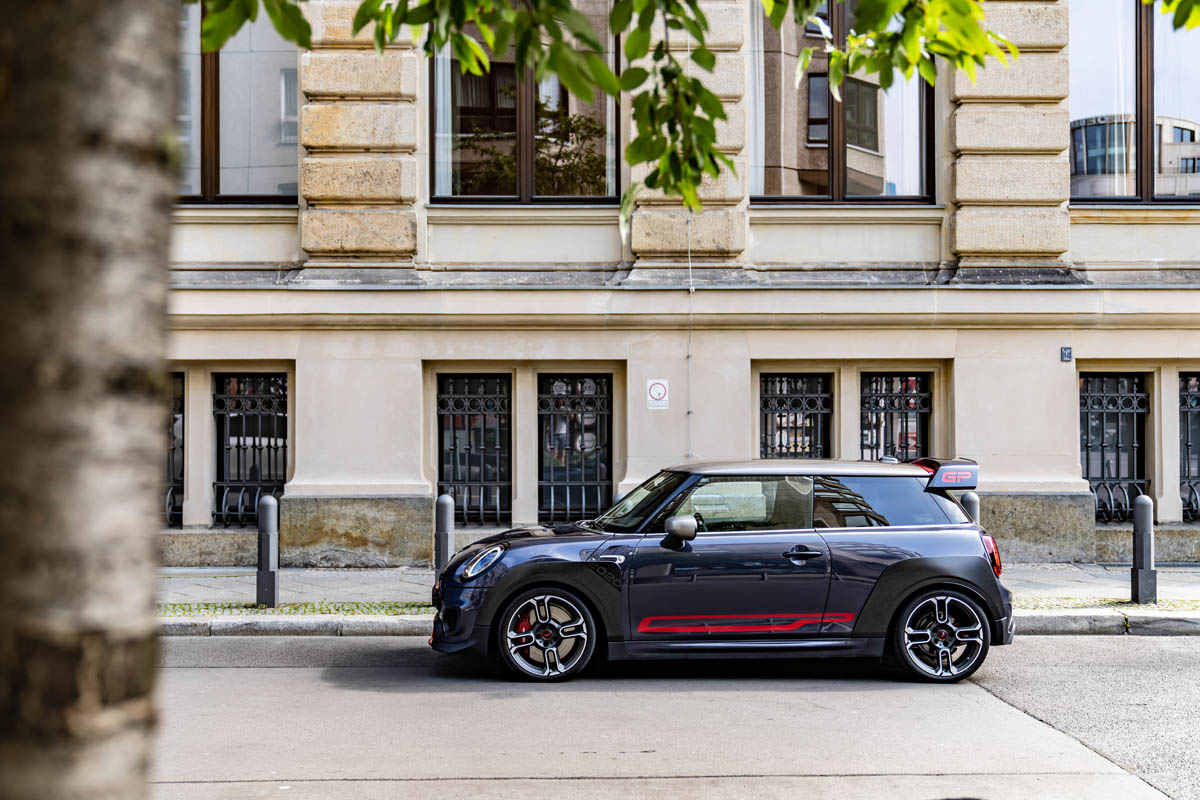 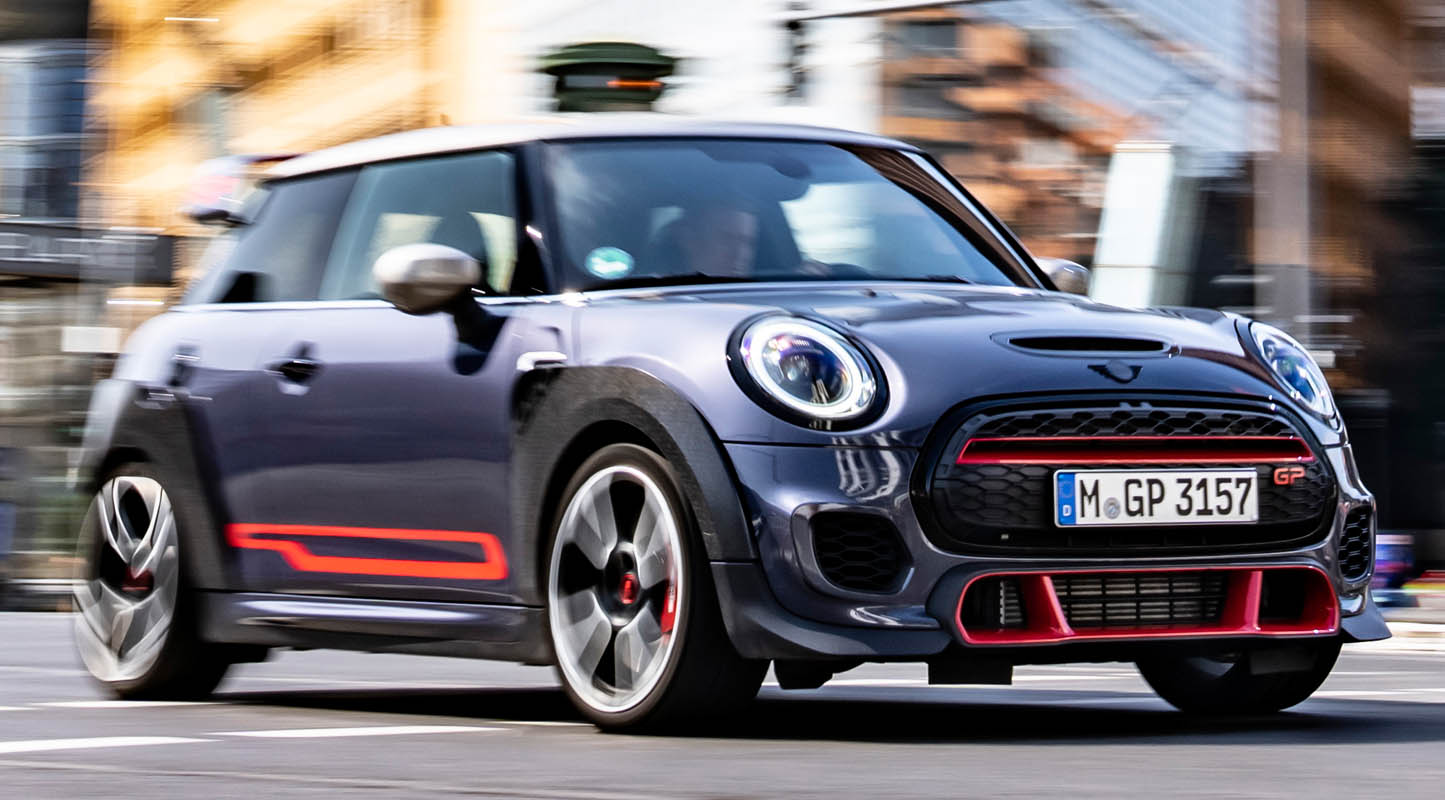 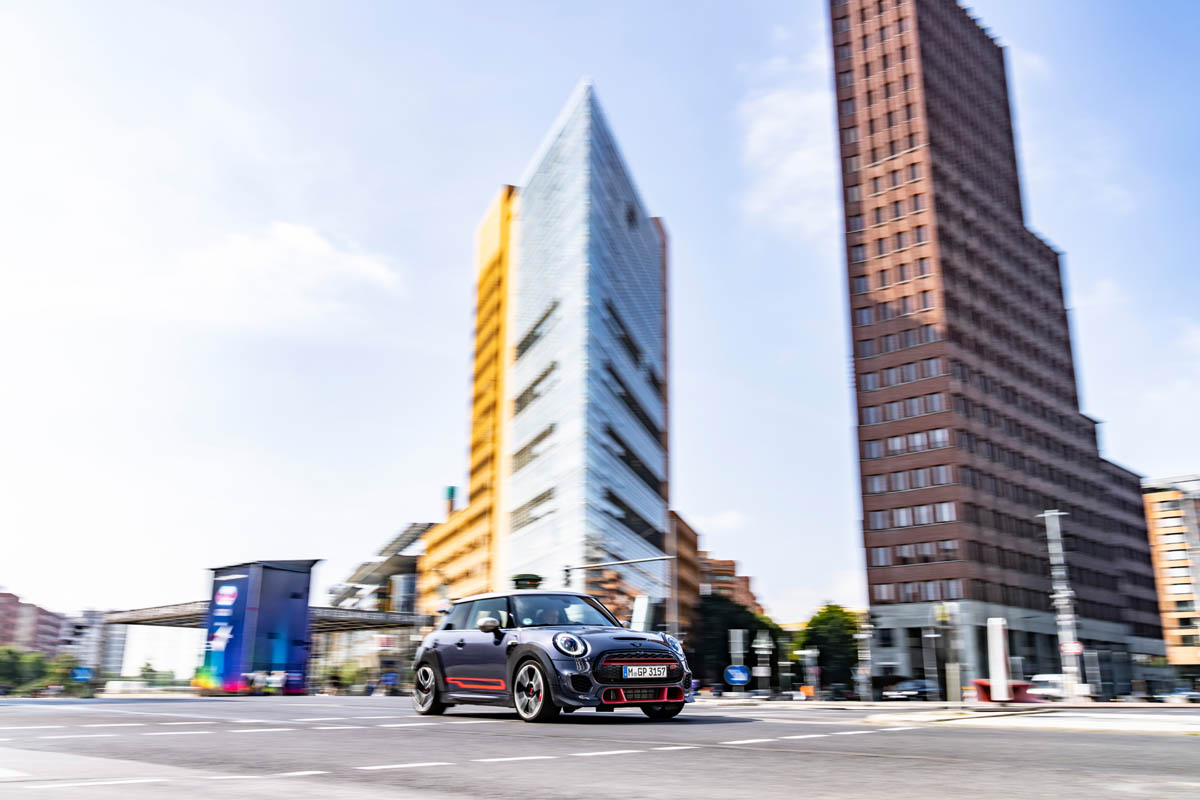 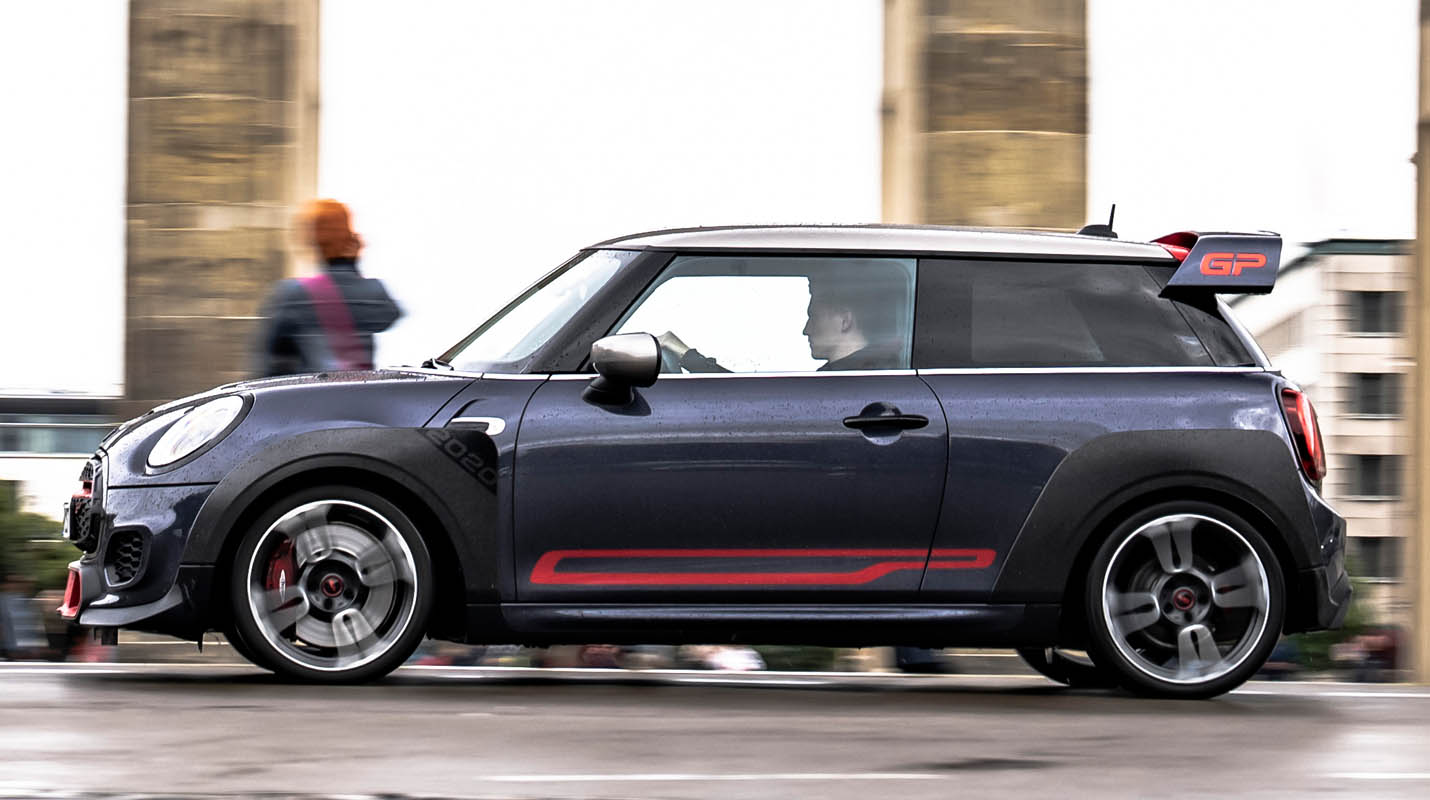 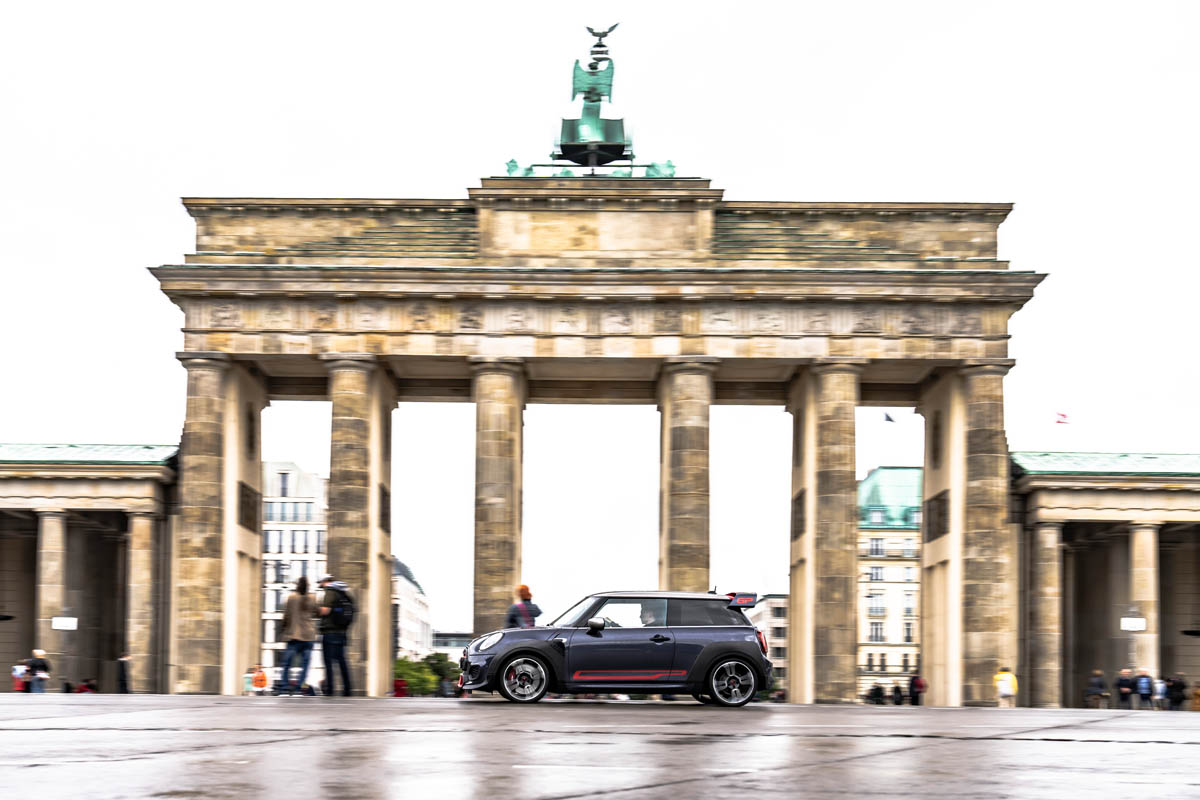 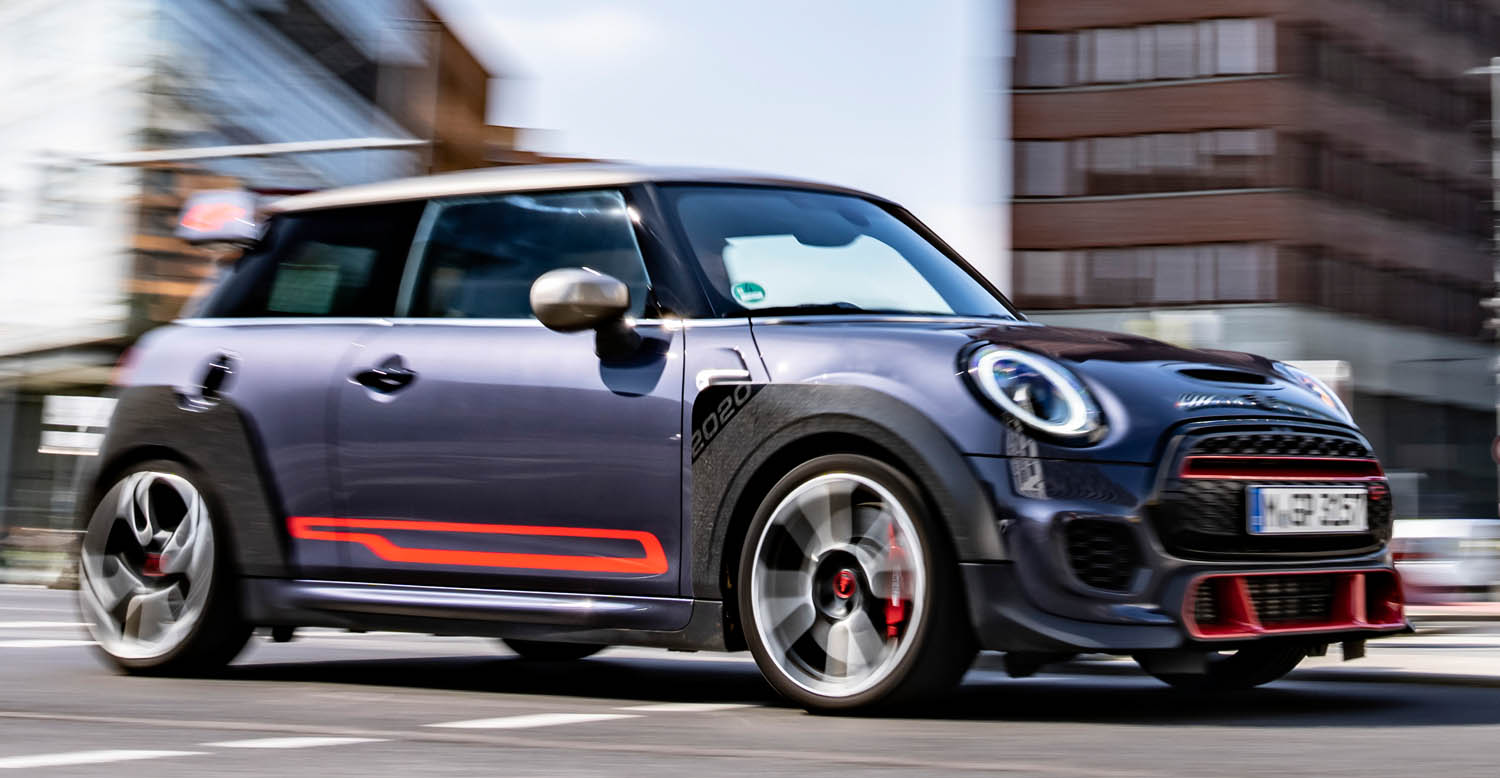 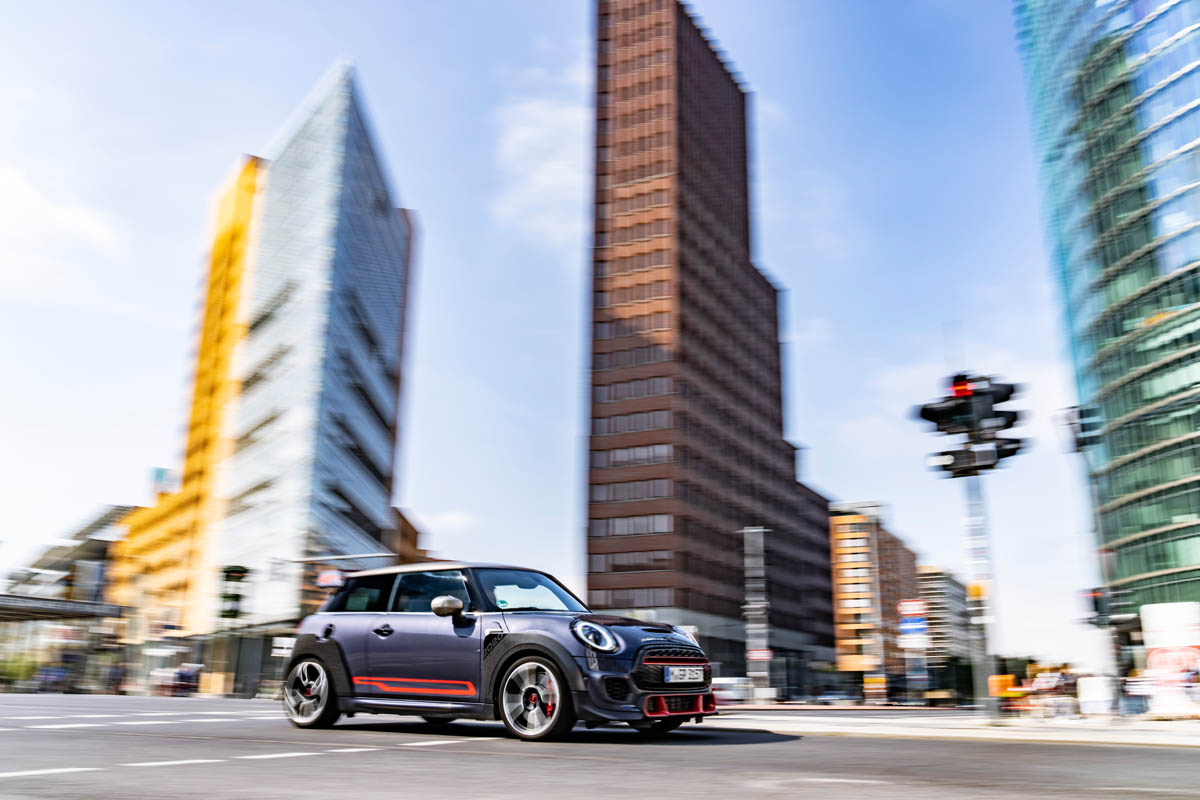 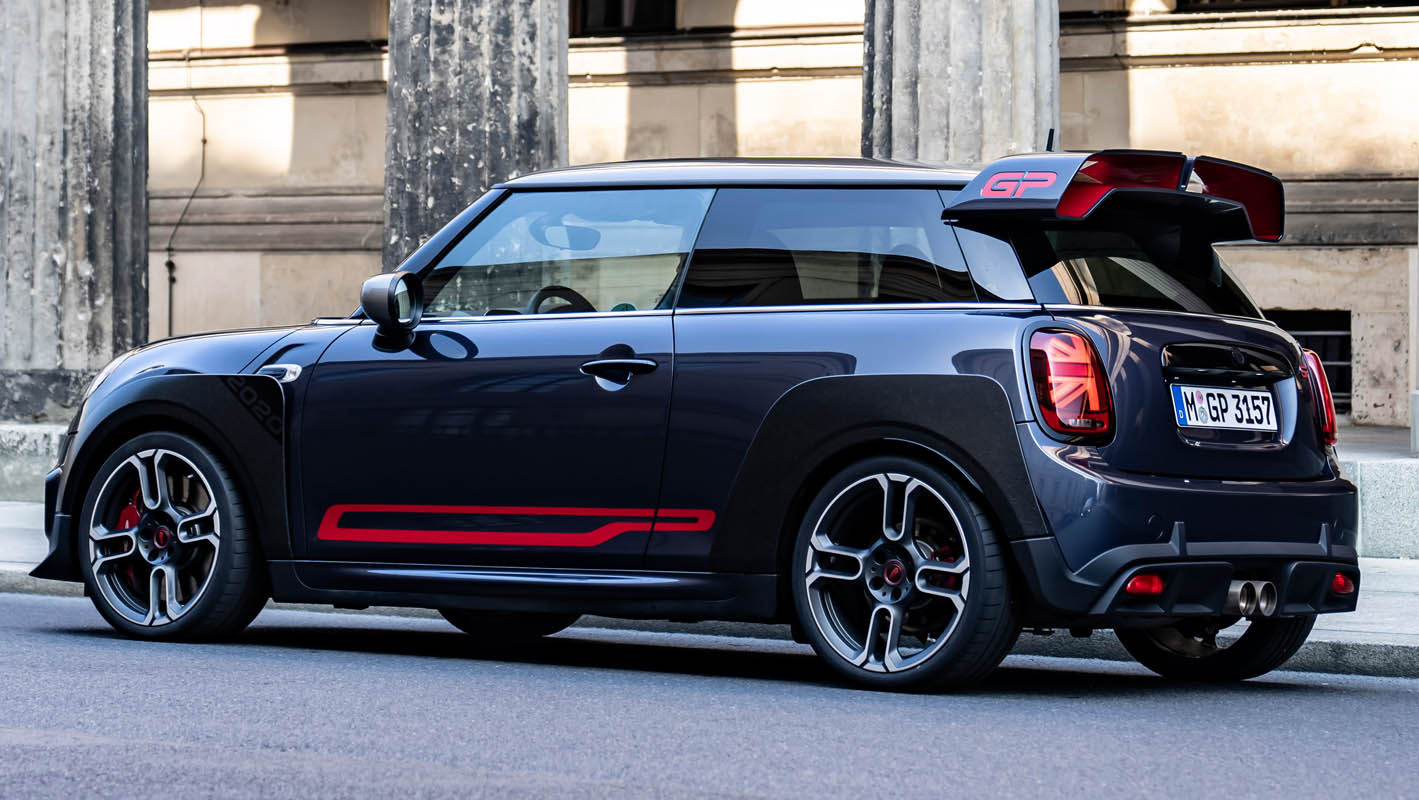 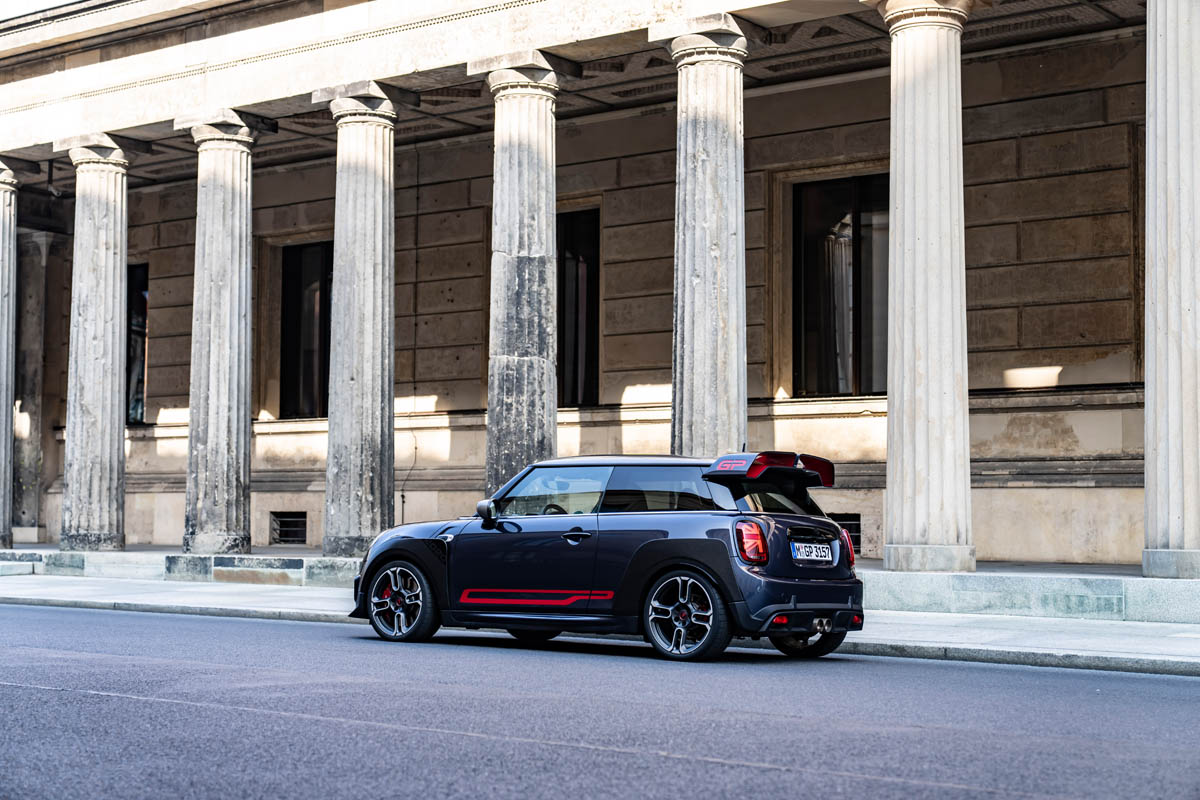 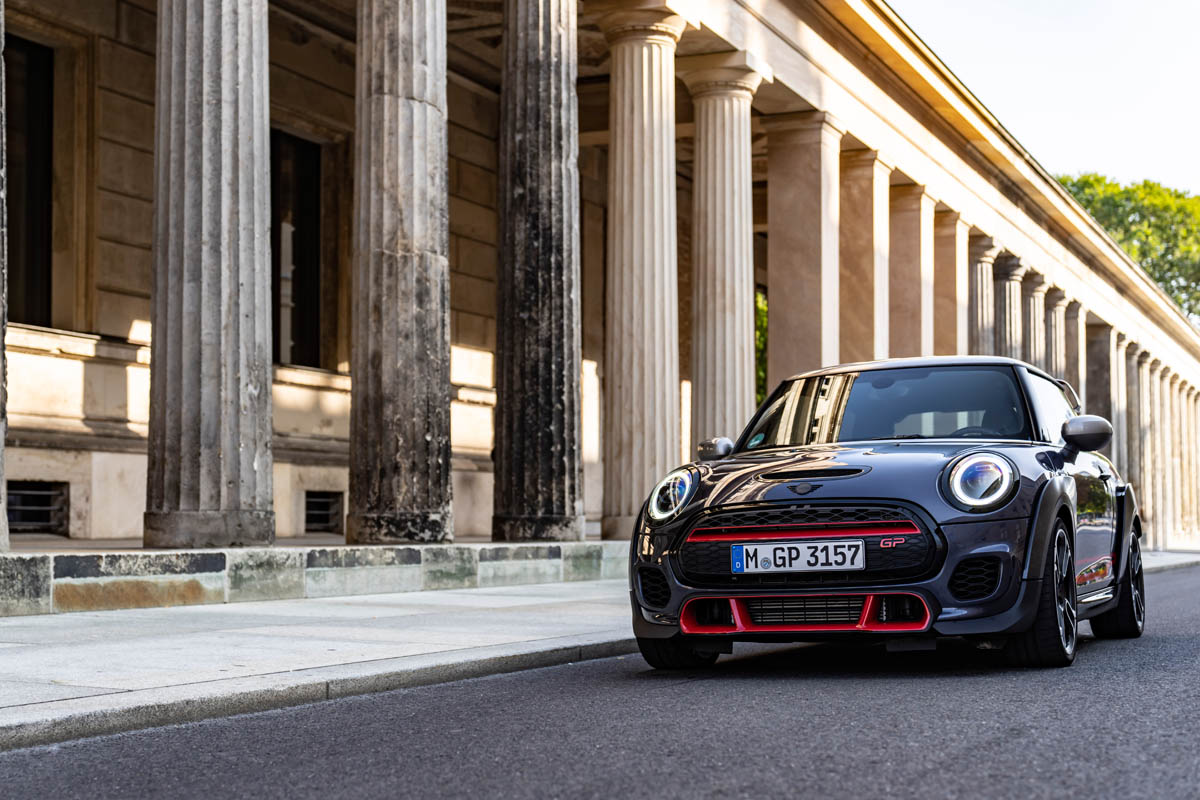 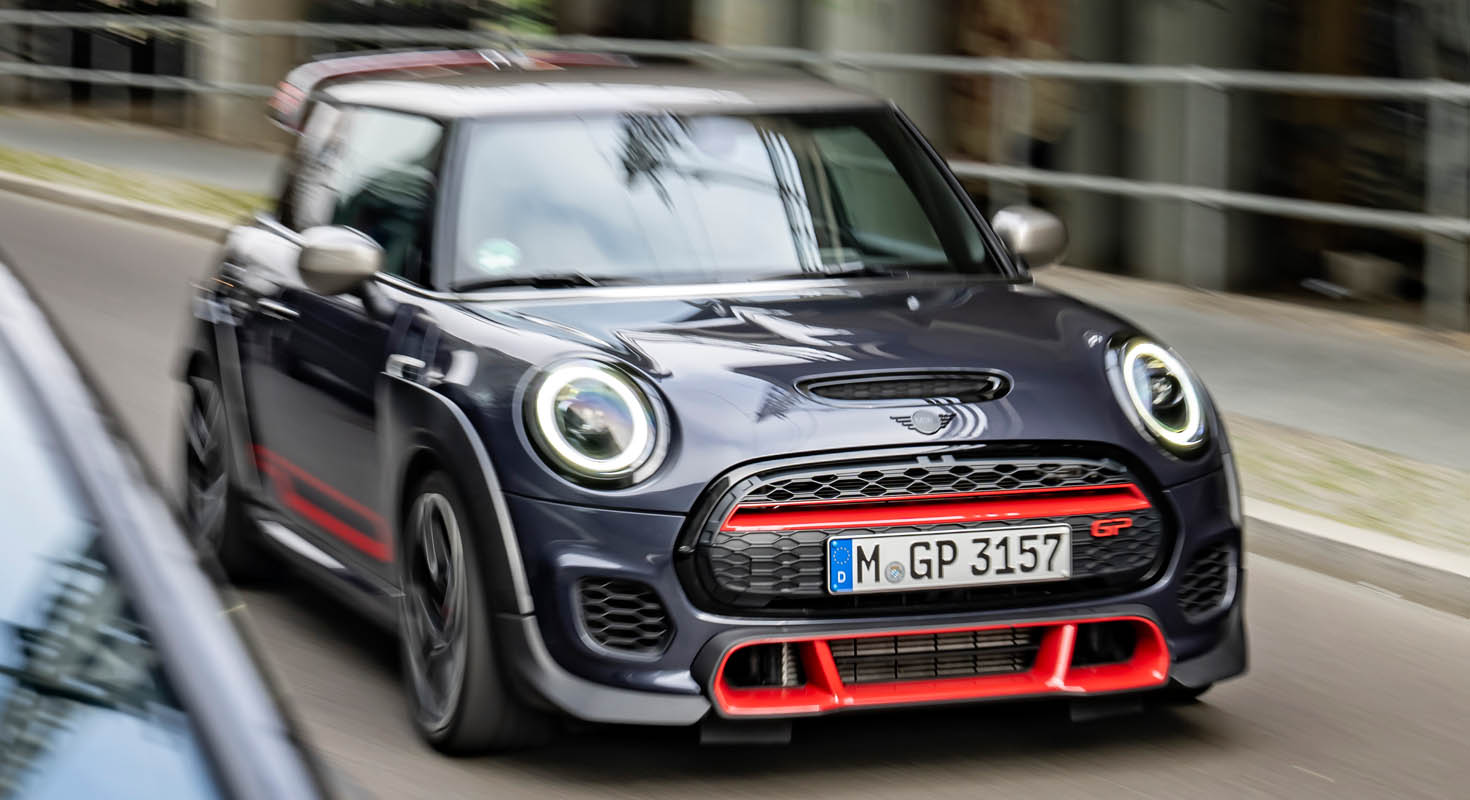 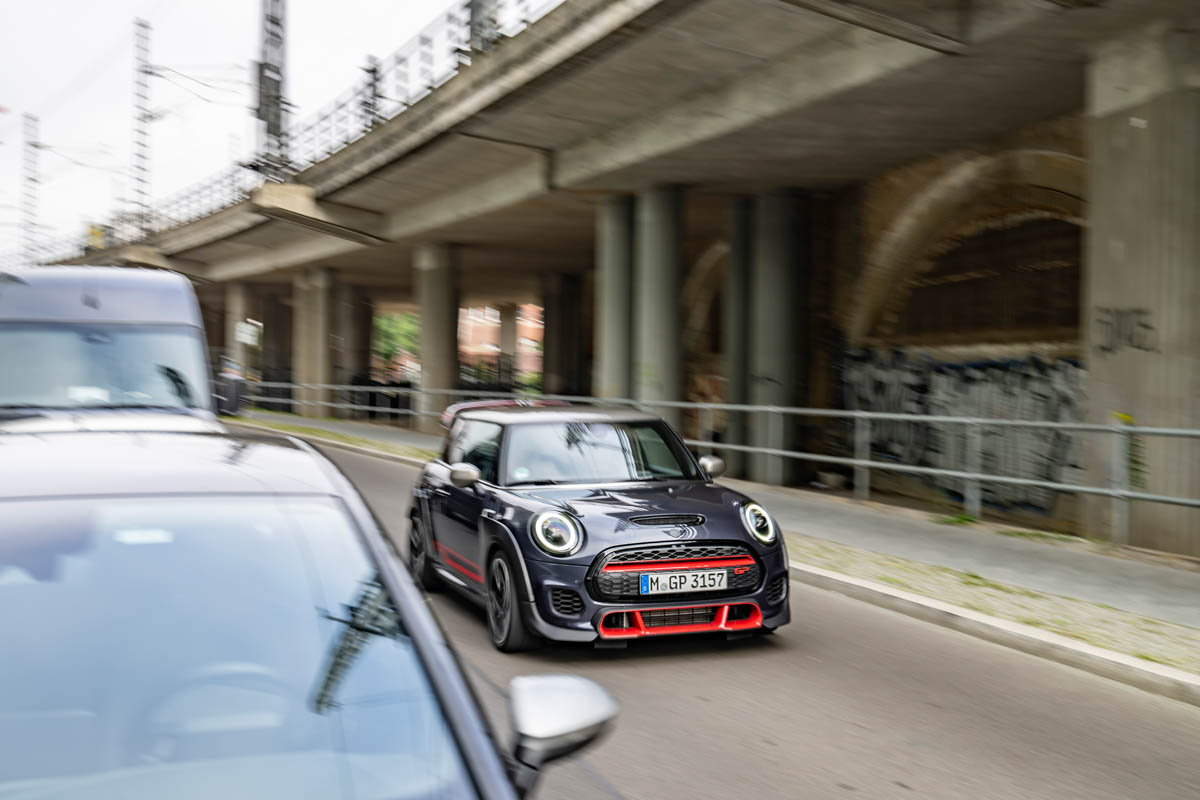 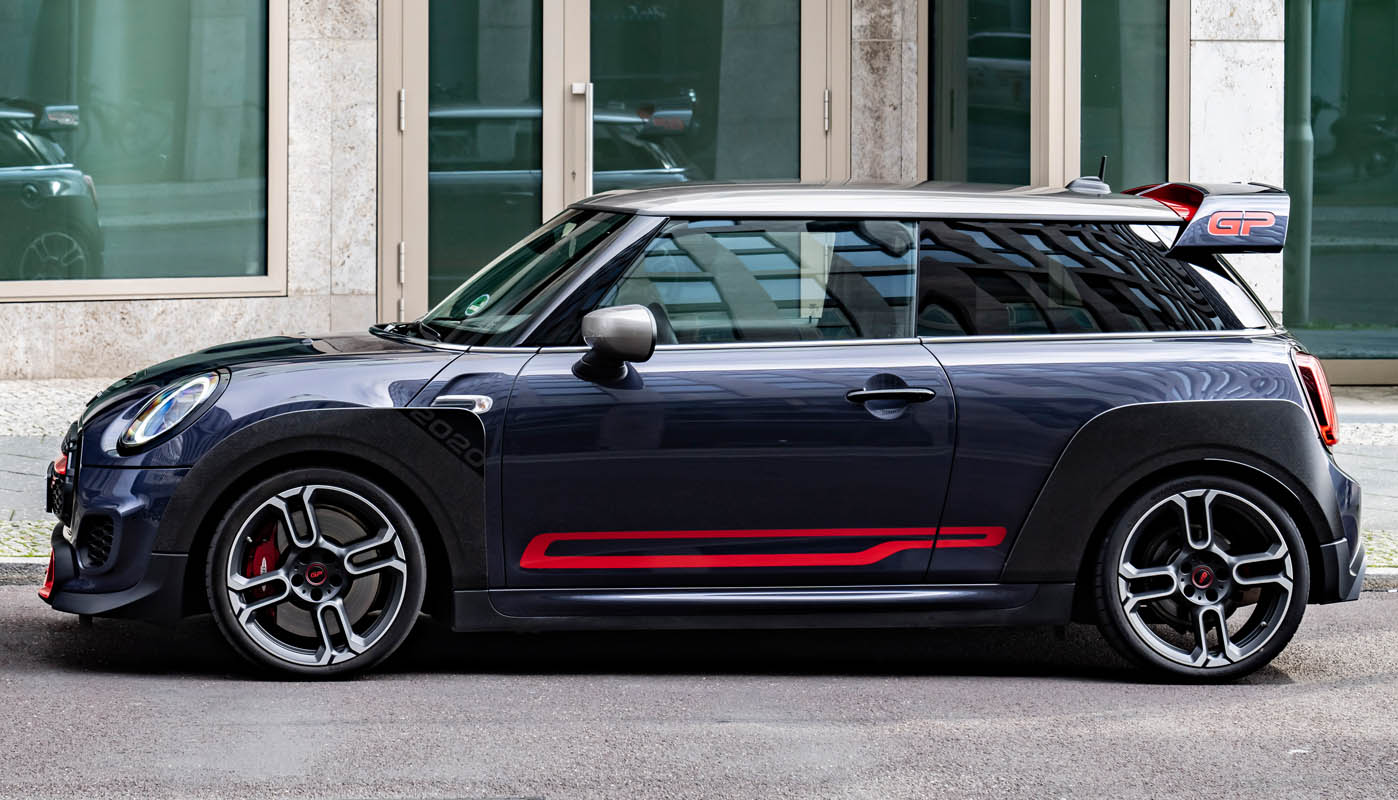 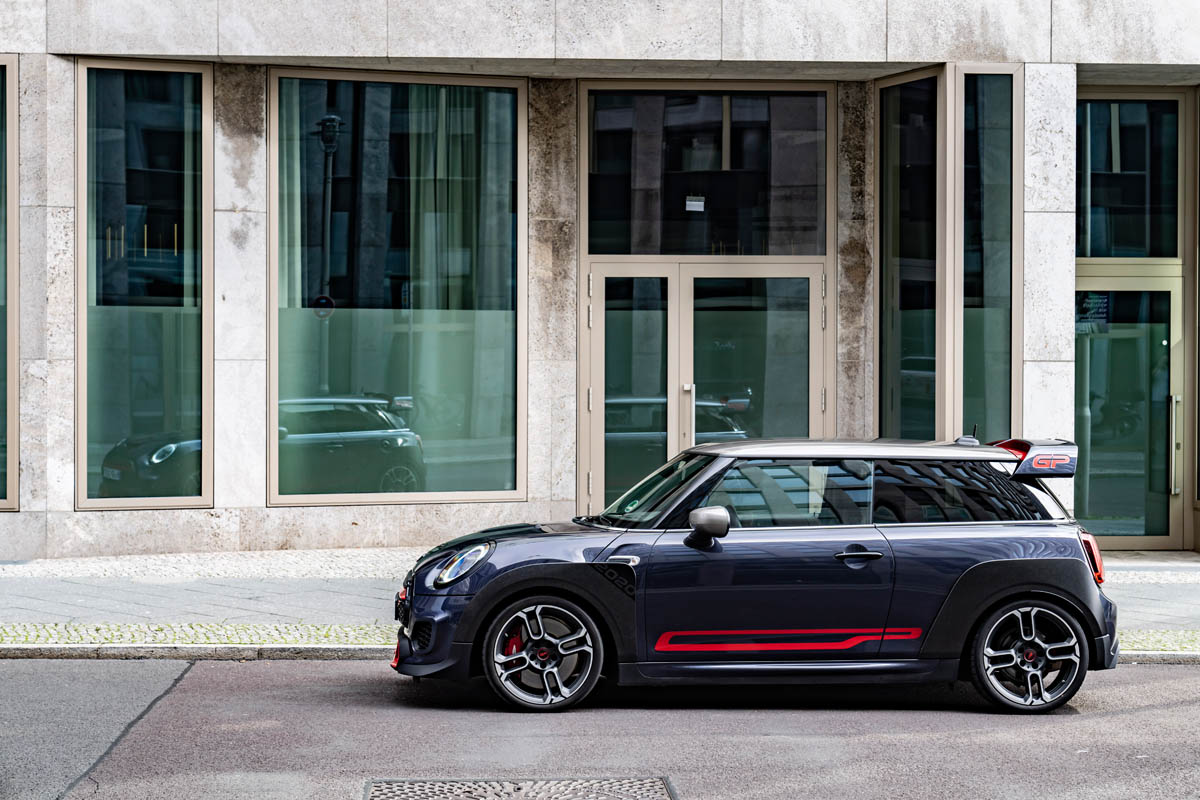 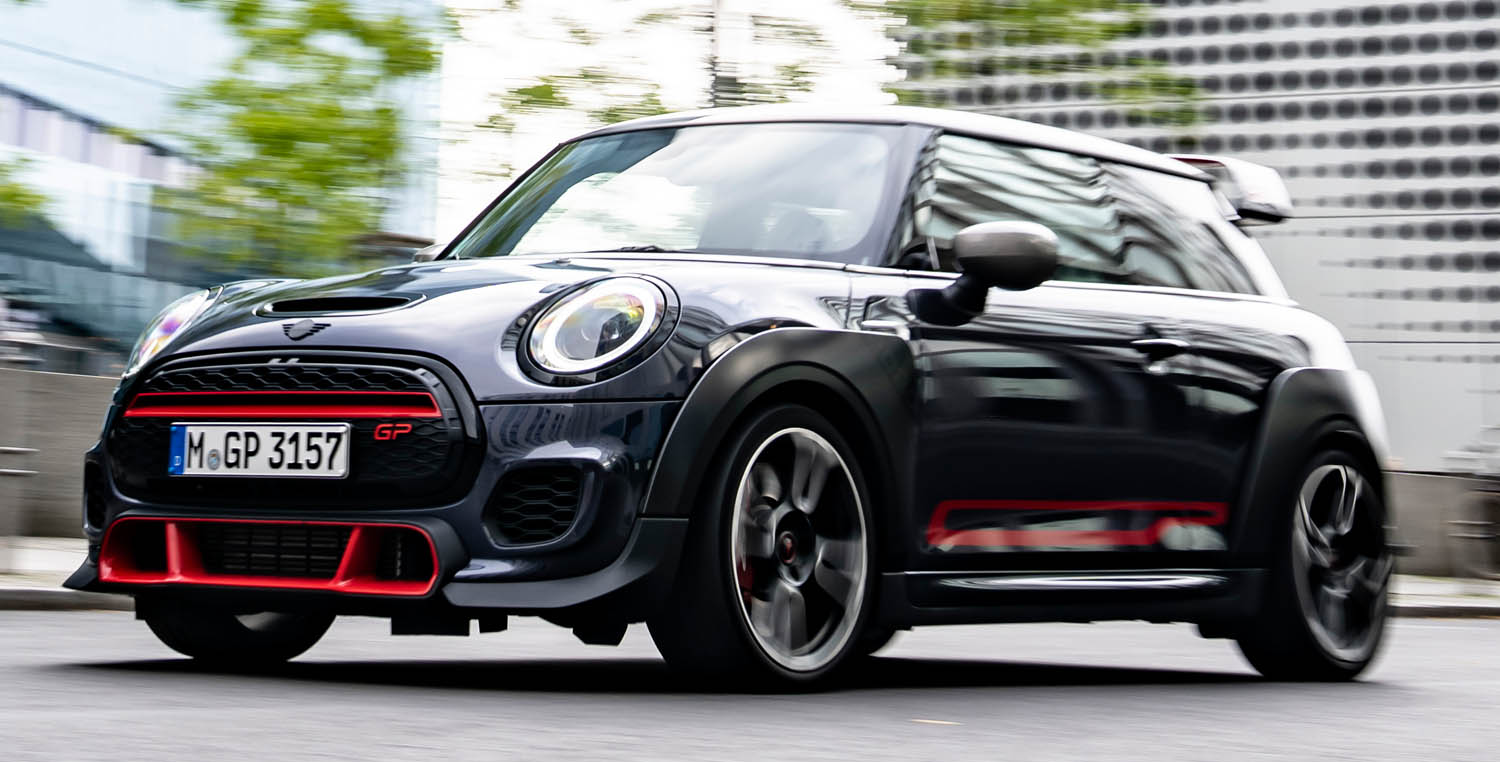 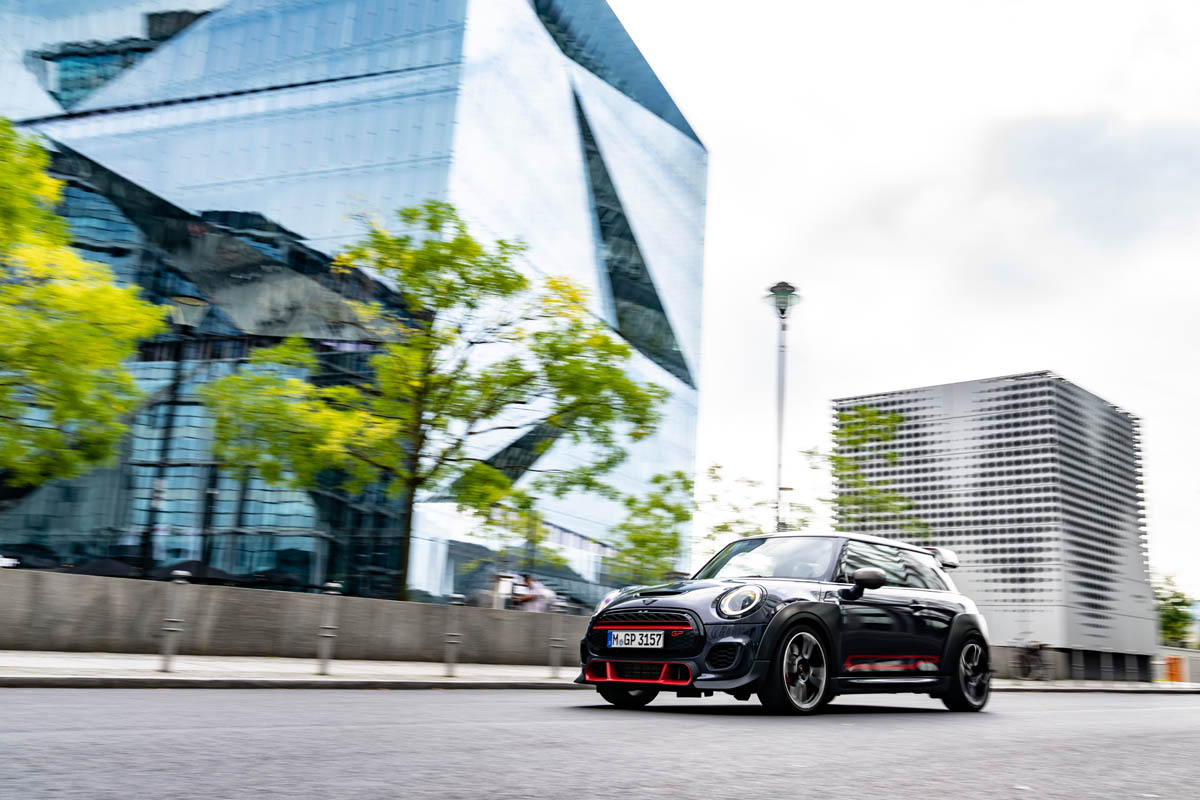