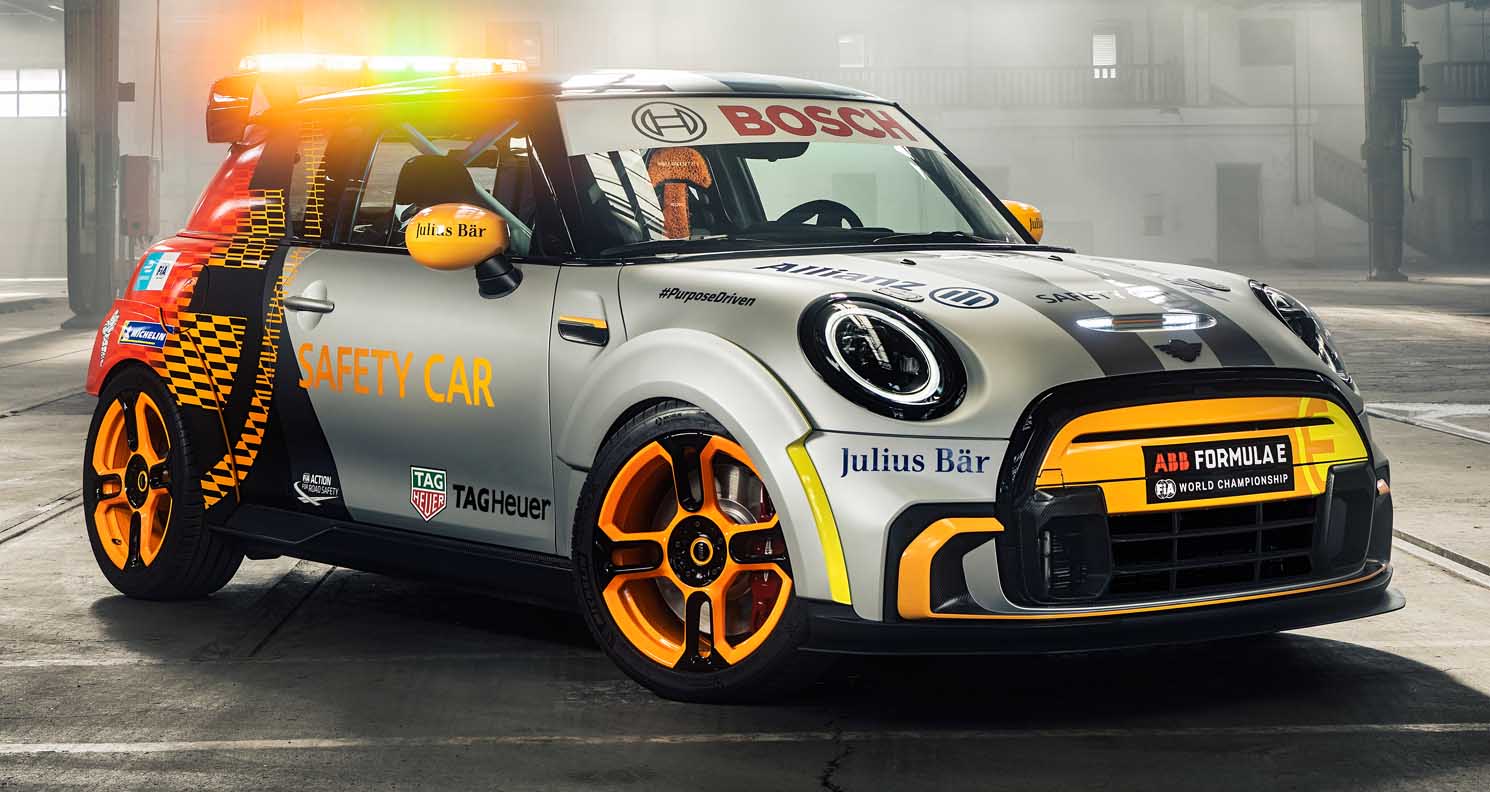 The MINI Electric Pacesetter inspired by JCW is the new Safety Car for the ABB FIA Formula E World Championship race series. As such, it connects the brand’s electrified future with the rich racing history of John Cooper Works. The car was created out of the new MINI Cooper SE as part of an unprecedented collaboration between MINI Design, BMW Motorsport, the FIA and the Formula E.

This extreme version of the MINI Electric has been developed as the Safety Car in the Formula E, so is clearly not intended for use on public roads. But it does reveal one of the directions we could take with the electrification of the JCW brand. For me, the message is clear: electrification and John Cooper Works are a good fit.”

The exterior of the MINI Electric Pacesetter inspired by JCW has been purpose-built for life on the track and represents the most dynamic interpretation yet of a MINI with all-electric power. “The design is an exciting symbiosis of technical precision and emotion,” explains Oliver Heilmer, Head of MINI Design.

“Here, function dictates form, and many design elements have been shaped by technical considerations. For example, we worked closely with our colleagues at BMW Motorsport to develop the form of the wheel arches and front and rear aprons, and the optimisation programme for them included weight-saving measures. This visually striking, technically precise design language gives the car its pervasive sense of emotional engagement and excitement.”

At the front of the car, classical MINI icons such as the circular headlights and hexagonal radiator grille create the familiar, easily recognisable MINI face. At the same time, signature John Cooper Works elements, such as wheel arches adapted to the car’s track width and the deep front apron with additional front splitters to the left and right, enhance the sporting visuals of the front end.

The blanked off “radiator grille” and MINI Electric logo point to the electric “heart” of the Safety Car. As virtually no drive system cooling is required through the upper area of the grille, the front end is largely enclosed to aid aerodynamics.

The only exceptions are the area below the grille and the eye-catching, almost squared-off apertures for brake cooling. The Safety Car’s white flashing lights are integrated harmoniously into the bonnet. Characteristic MINI bonnet stripes extend over the roof to the rear end. 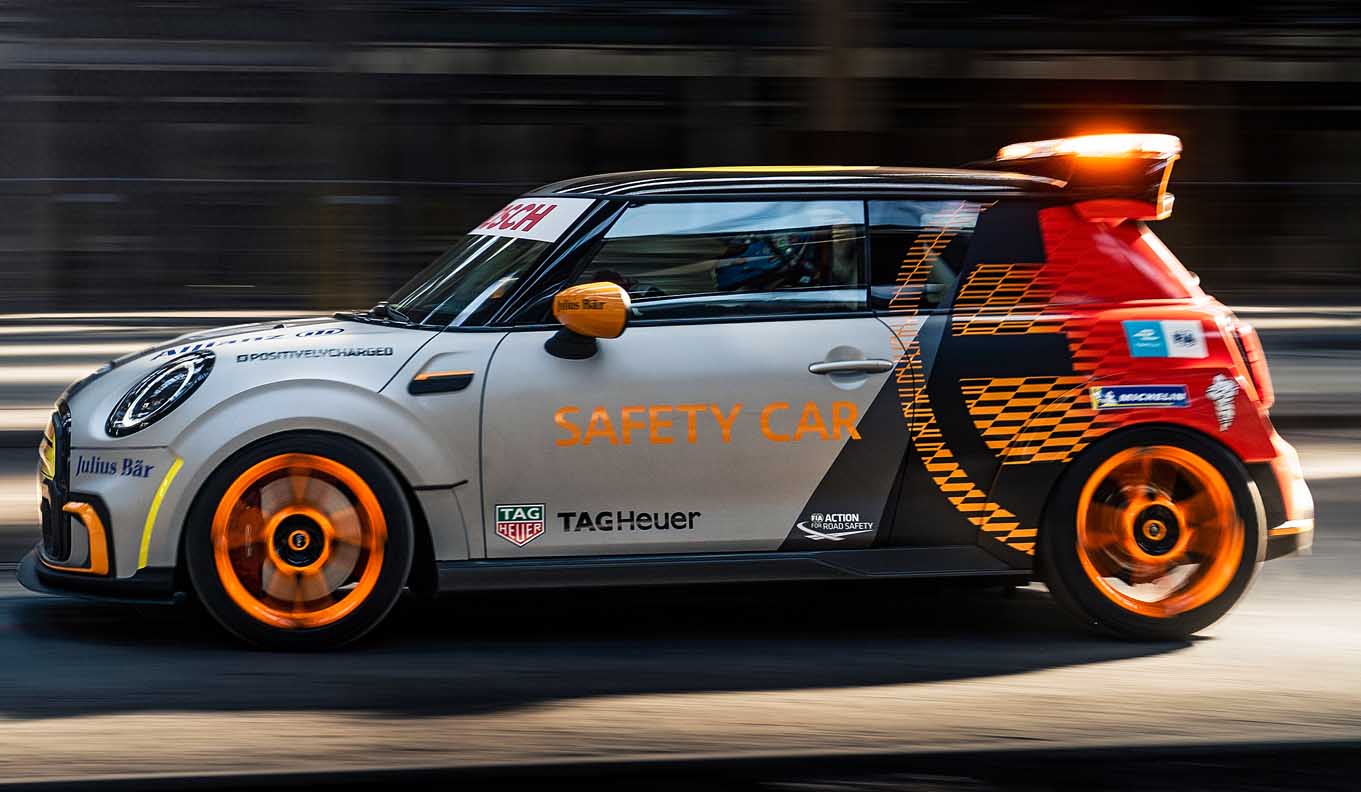 The MINI Electric Pacesetter inspired by JCW also cuts an extremely dynamic figure from the side. The interplay of geometrically accentuated spats (with carefully placed aero edges) and sporty side skirts gives the car the appearance of powering forward even before it turns a wheel. Together with the increased-diameter wheels, which almost fill the wheel arches, these elements strengthen the time-honoured MINI “stance on the wheels”.

The spats and spoilers are made – or more precisely 3D printed from recycled carbon fibre – in Oxford. Yellow accent lines and surfaces on the aero elements (e.g. the spats, skirts and rear wing) provide a nod to the airflow optimisation taking place in these areas and add a visual flourish to the air deflectors and aero edges.

The respective colour worlds of the MINI Electric and John Cooper Works brand merge into a single statement here. The main body colour is a matt silver which extends back beyond the centre-point of the car. A high-gloss wrap with a two-stage colour gradient – from Highspeed Orange to Curbside Red met. – then covers the rest of the body to the rear.

The contrast between matt and gloss surfaces brings extra smoothness to the silhouette, while the clear, diagonal separation lines between the different colours injects further dynamism. On the flanks, a chequered flag-inspired pattern shares the stage with a large MINI Electric logo, which can also be found in the radiator grille, on the roof and at the rear end. The Safety Car brief also brings regulations-specific and sponsor-related graphics, which add further visual intensity to the car’s racing character.

Broad and eye-catching – the rear

The rear end in black and Curbside Red met. uses yellow accent surfaces to extend the eye-catching design language from the front end and flanks, and makes an extremely modern and dynamic statement.

The rear apron has cut-outs around the wheels, clearing the view to the higher-grip racing tyres. Between the wheels sits an unadorned diffuser. When the car is viewed from this angle, the accents in Energetic Yellow and lack of exhaust tailpipes identify this as a car powered by an electric drive system. 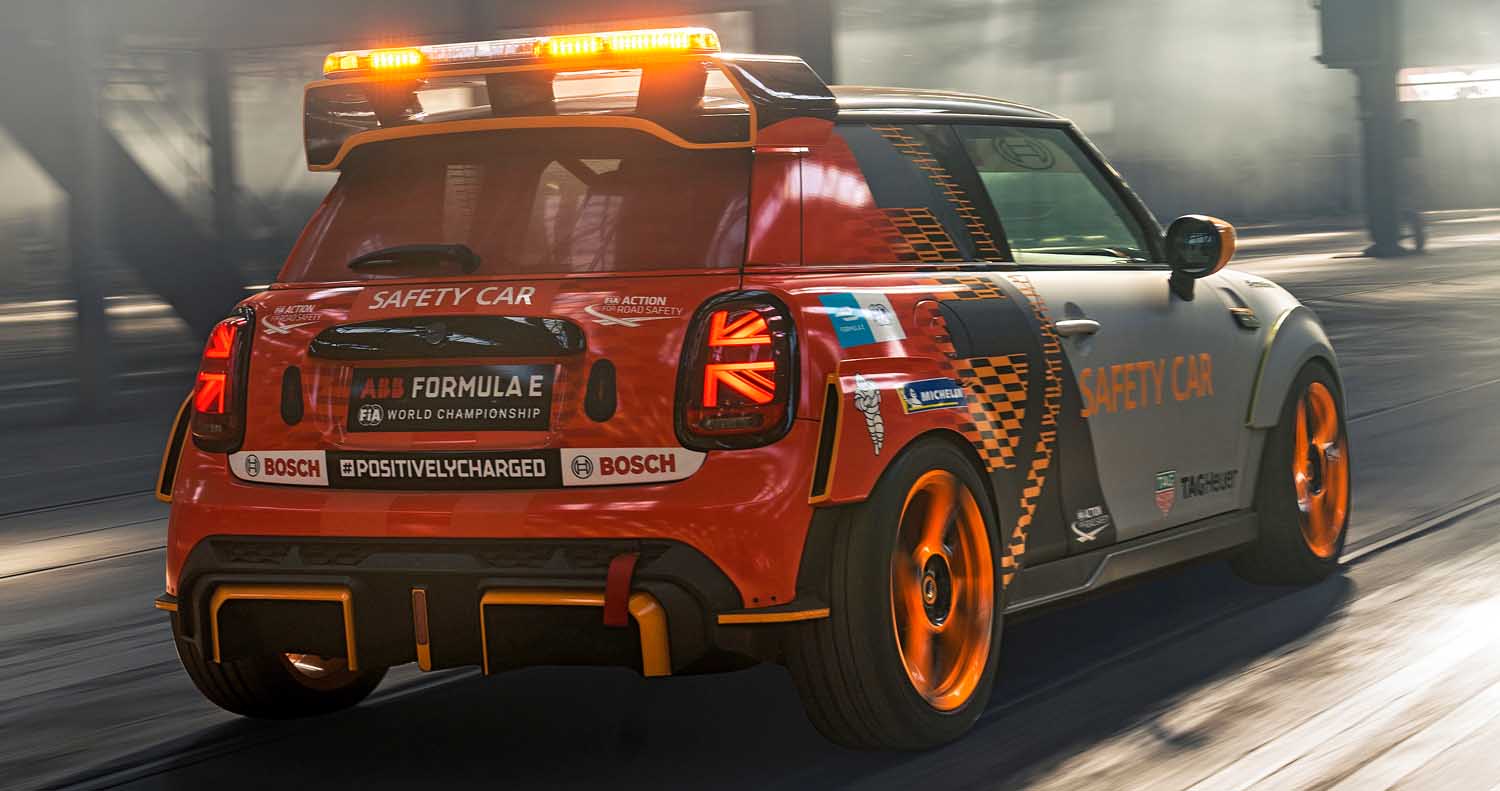 The interior is stripped back to the absolute essentials; only the front seats remain. The driver’s area consists of a certified seat with six-point belt approved for both racing and road use, a steering wheel with minimalist-design carbon fibre impact absorber and a digital instrument cluster. The central information display makes way for a carbon fibre cover here to further reduce weight.

The centre console houses the gearshift lever, handbrake and controls for the necessary signal lights – all in exposed carbon fibre. The likewise pared-back carbon-fibre door panels with window and door openers contain cloth straps to make closing the doors easier. Another central feature of the interior is the welded-in roll cage, which maximises safety. And the remainder of the stripped-out interior structure is also painted in typical racing white (for functional reasons).

Bespoke 3D-printed parts for the interior

The steering wheel’s minimalist impact absorber and the boost panel on the right-hand side of the wheel are high-quality, custom-made components, likewise the centre console cowling and door panelling on the driver’s side.

Another highlight are the removable pads on the sport seat, which are likewise 3D-printed and whose innovative structure combines comfort, robustness and modularity. The thickness, hardness and colour of the pads can be adapted as required according to the physiognomy, weight and personal taste of the driver at hand.

Ready for the race track, helped by knowhow from BMW Motorsport

Behind the visually powerful design of the MINI Electric Pacesetter inspired by JCW lies the expertise of BMW Motorsport. Rigorous adherence to lightweight design principles gives the Safety Car a kerb weight of approx. 1,230 kg – which makes it approx. 130 kg lighter than the standard MINI Cooper SE.

Even more important for a Safety Car, though, are the mid-range figures. Here, the MINI Electric Pacesetter inspired by JCW showcases all the talents of its torque-rich electric drive system with single-speed transmission, enabling a 80-120 km/h (75 mph) time of 4.3 seconds (standard model: 4.6 s)

The drive system teams up with racing coilover suspension (three-way adjustable for rebound, compression, height and camber) to deliver maximum go-kart feeling. Race-spec suspension control arm mountings, a 10 mm increase in track width, plus the four-piston brakes and wheels from the MINI John Cooper Works GP with Michelin Pilot Sport tyres (size 245/40 R18) round off the overall package. The same tyres with which the front wheels of Formula E racing cars are fitted. 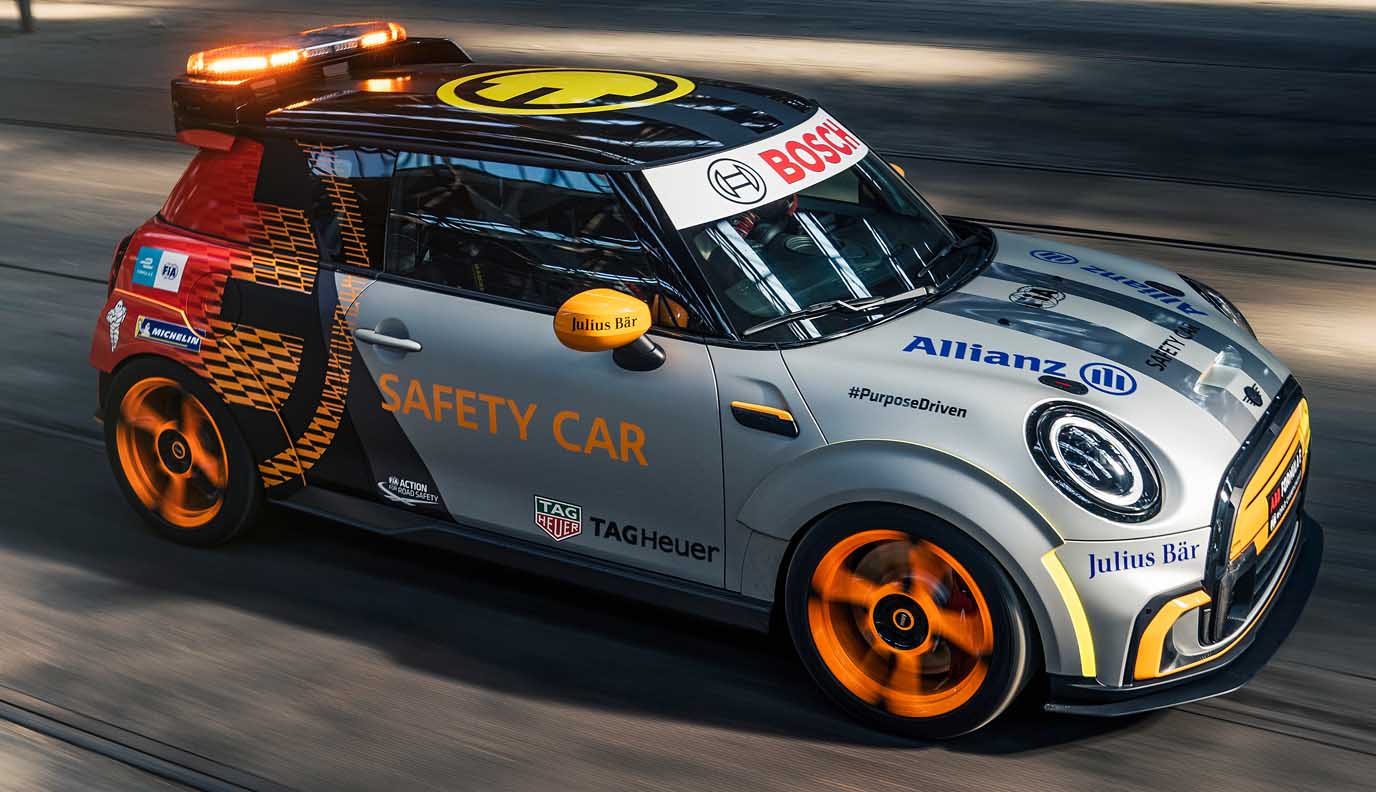 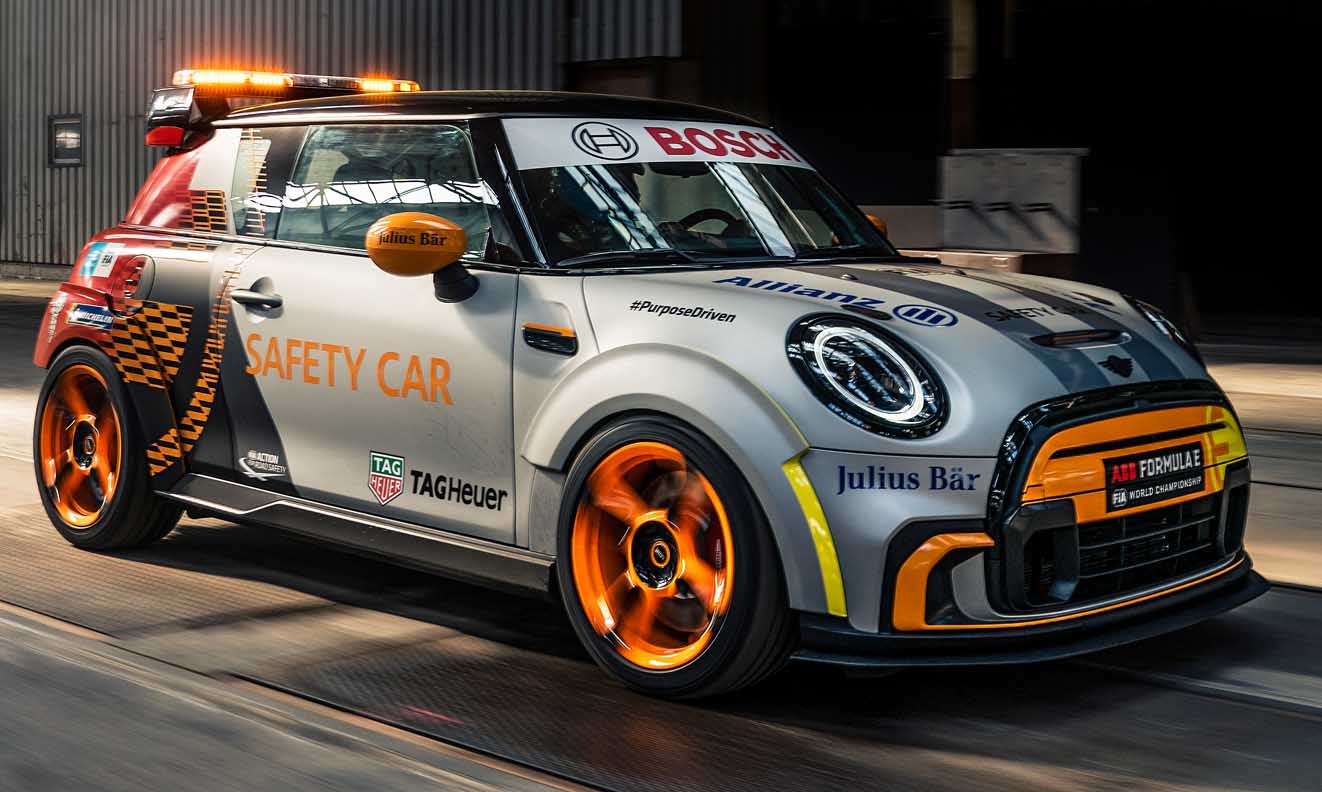 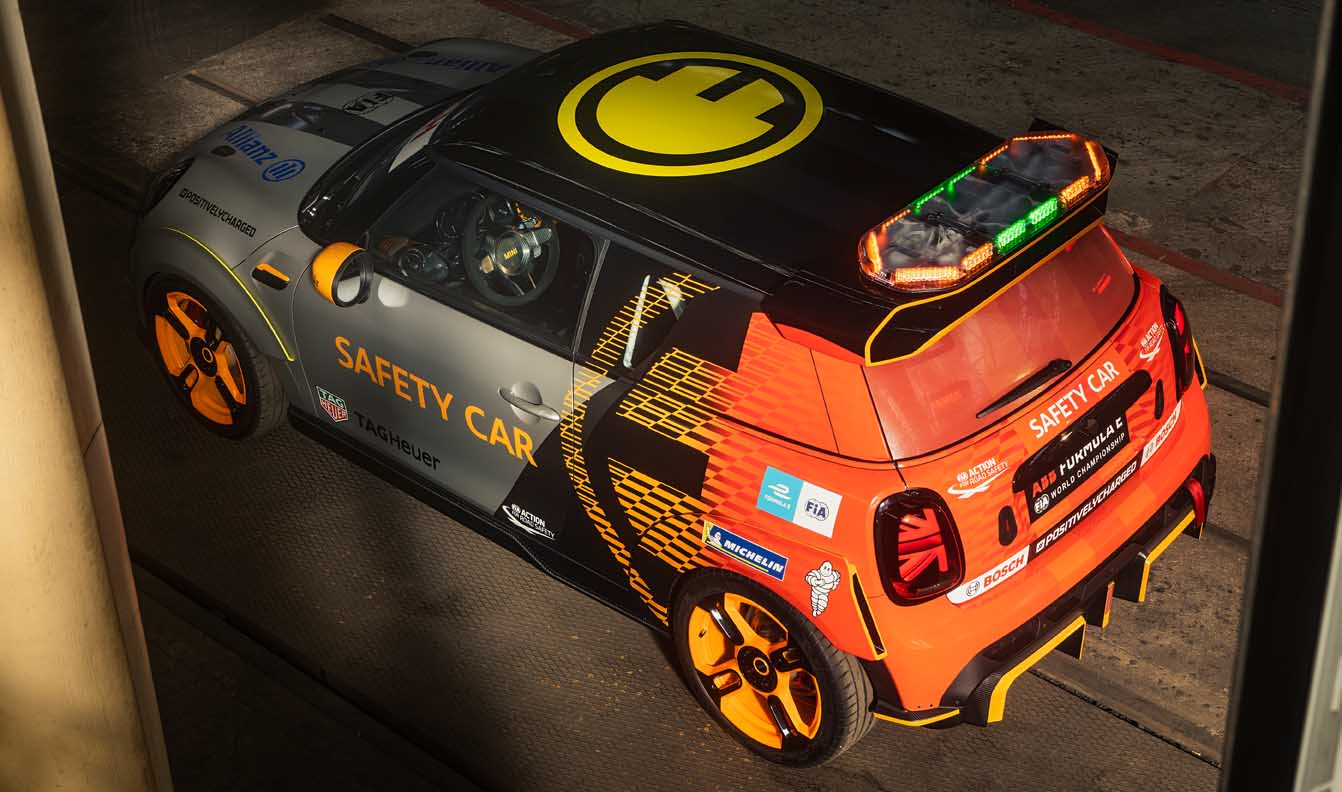 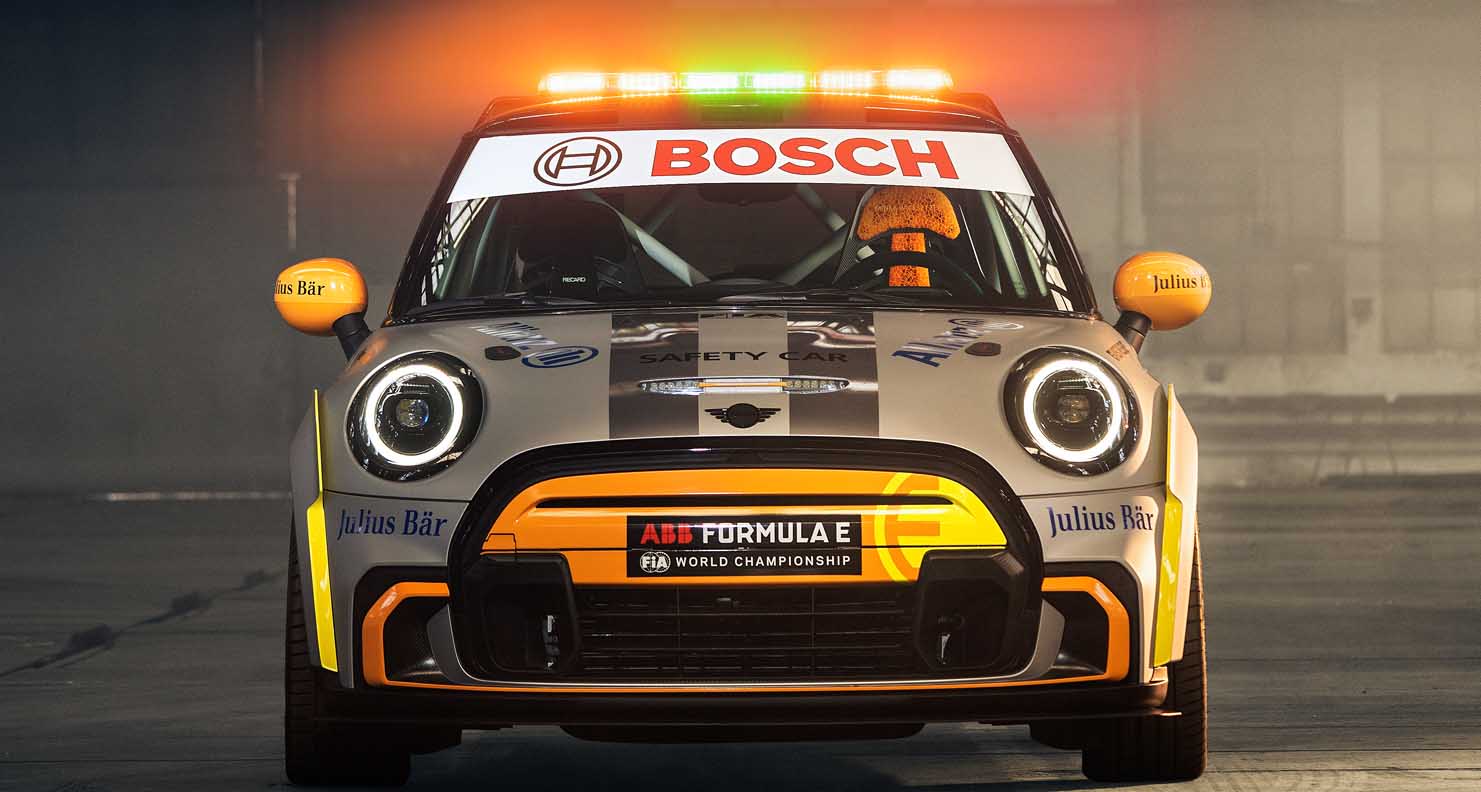 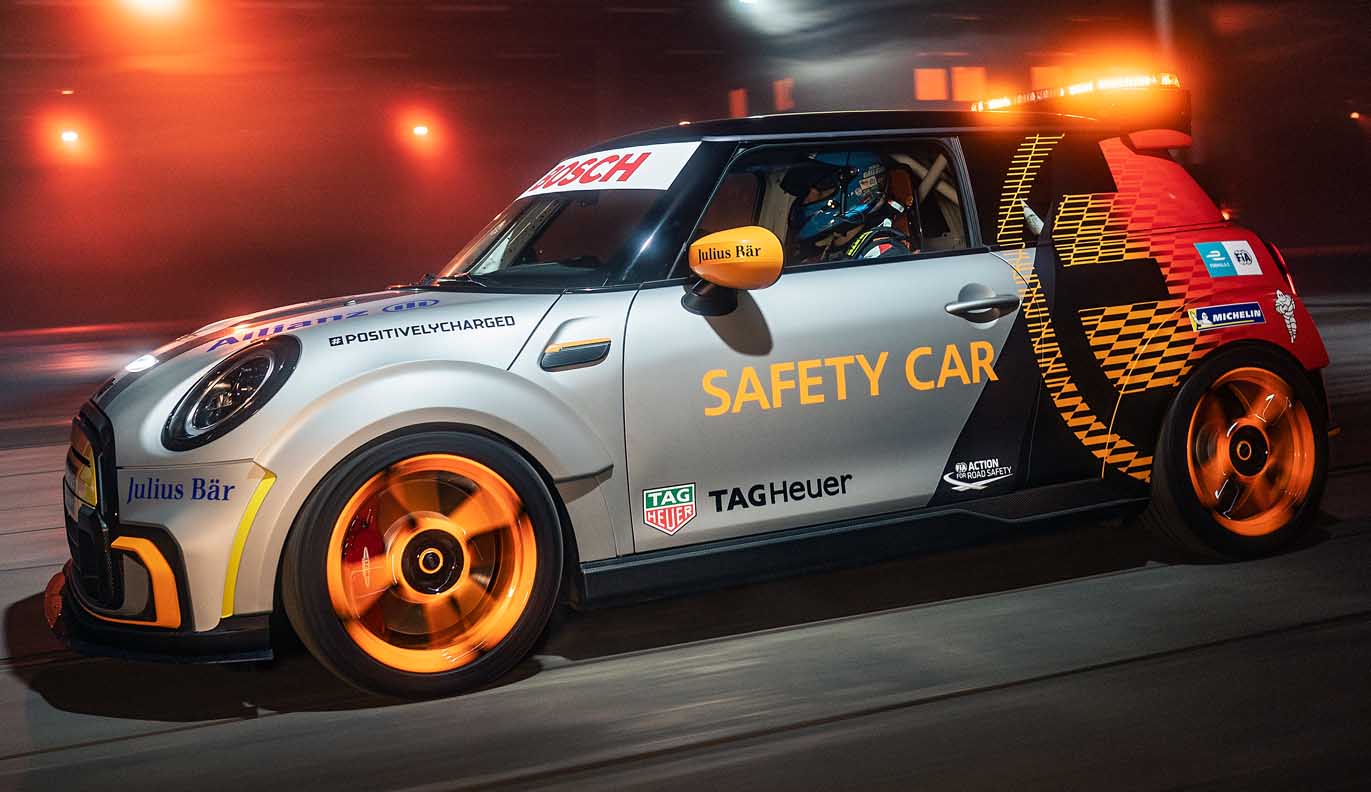 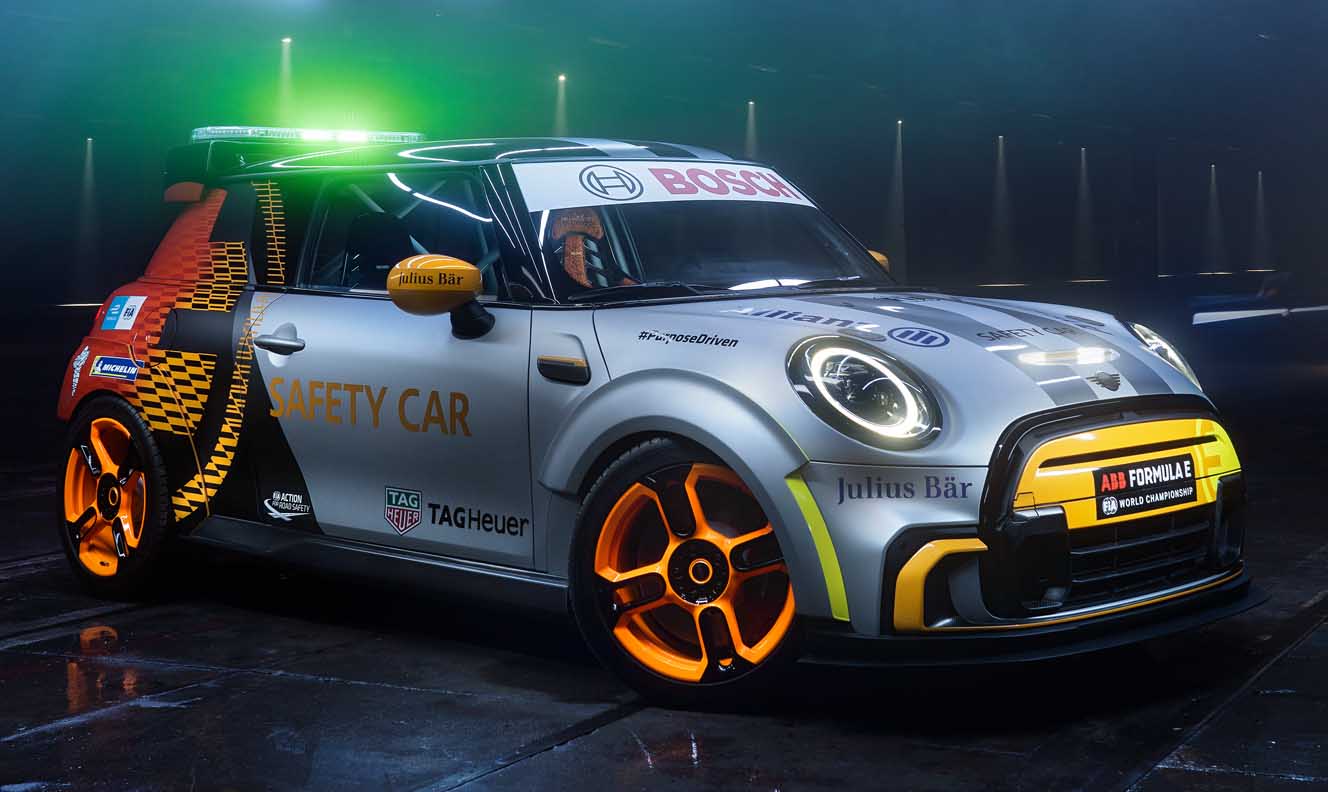 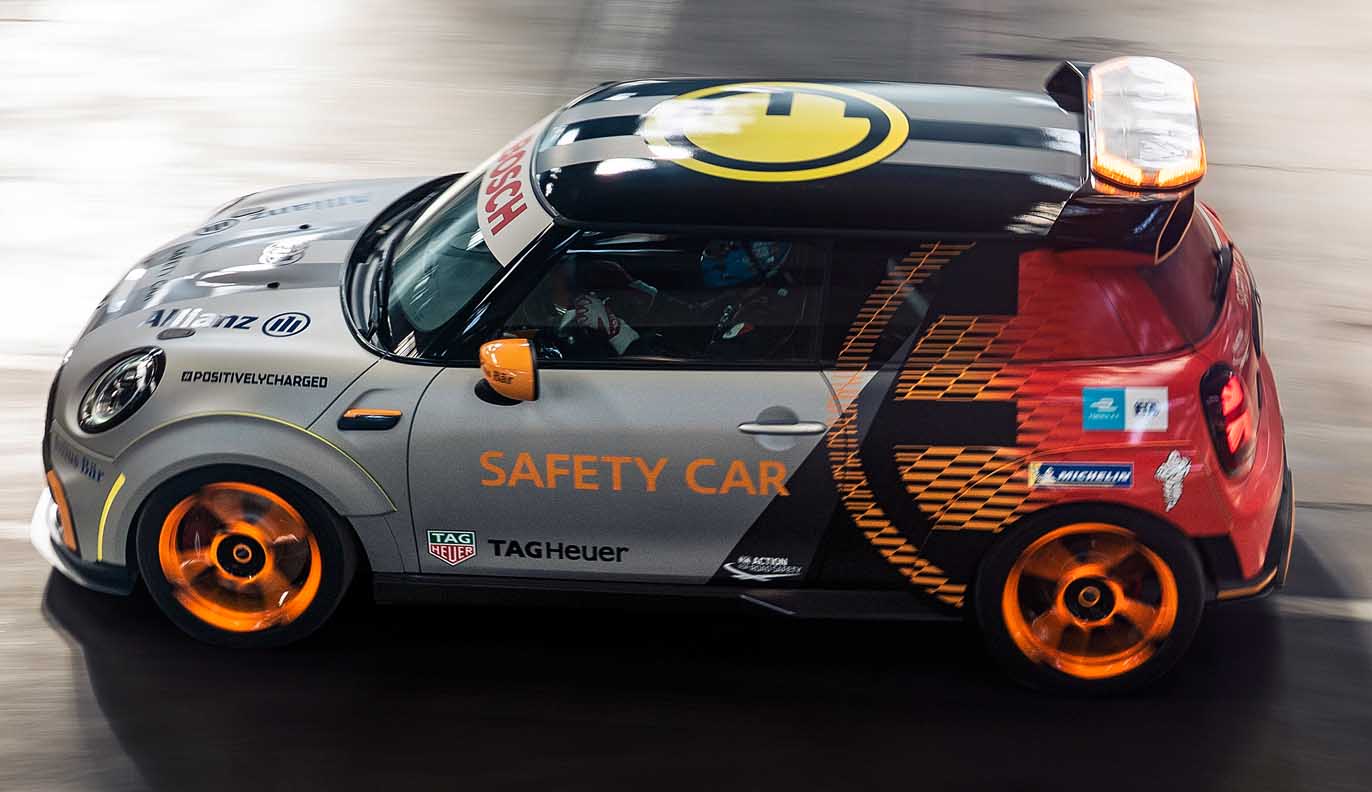 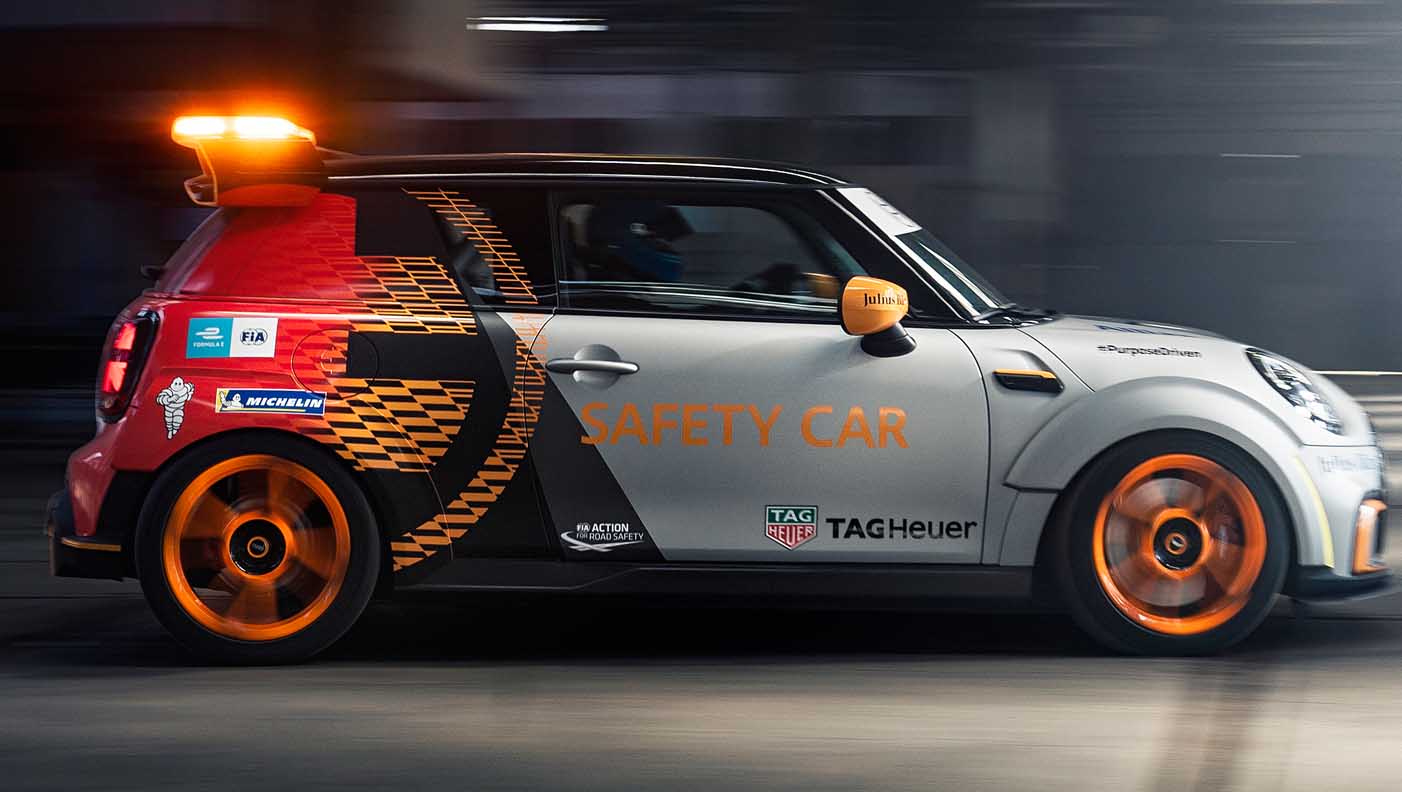 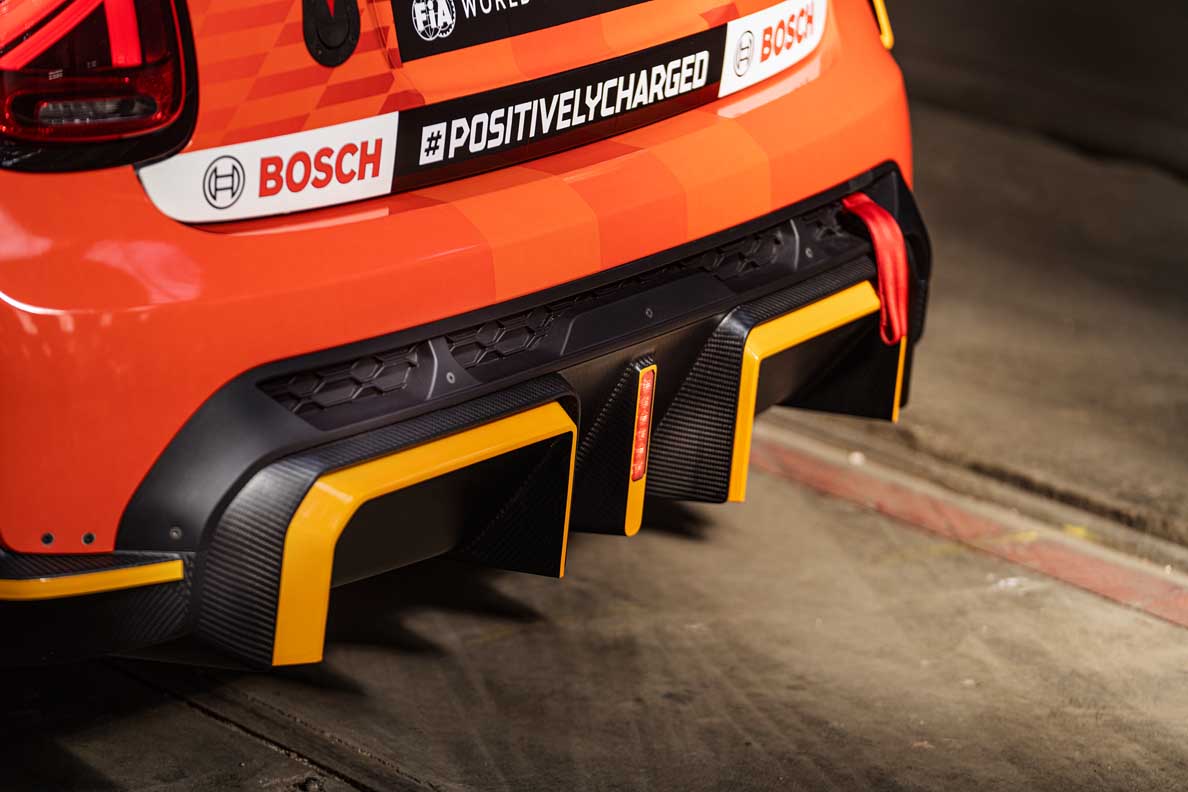 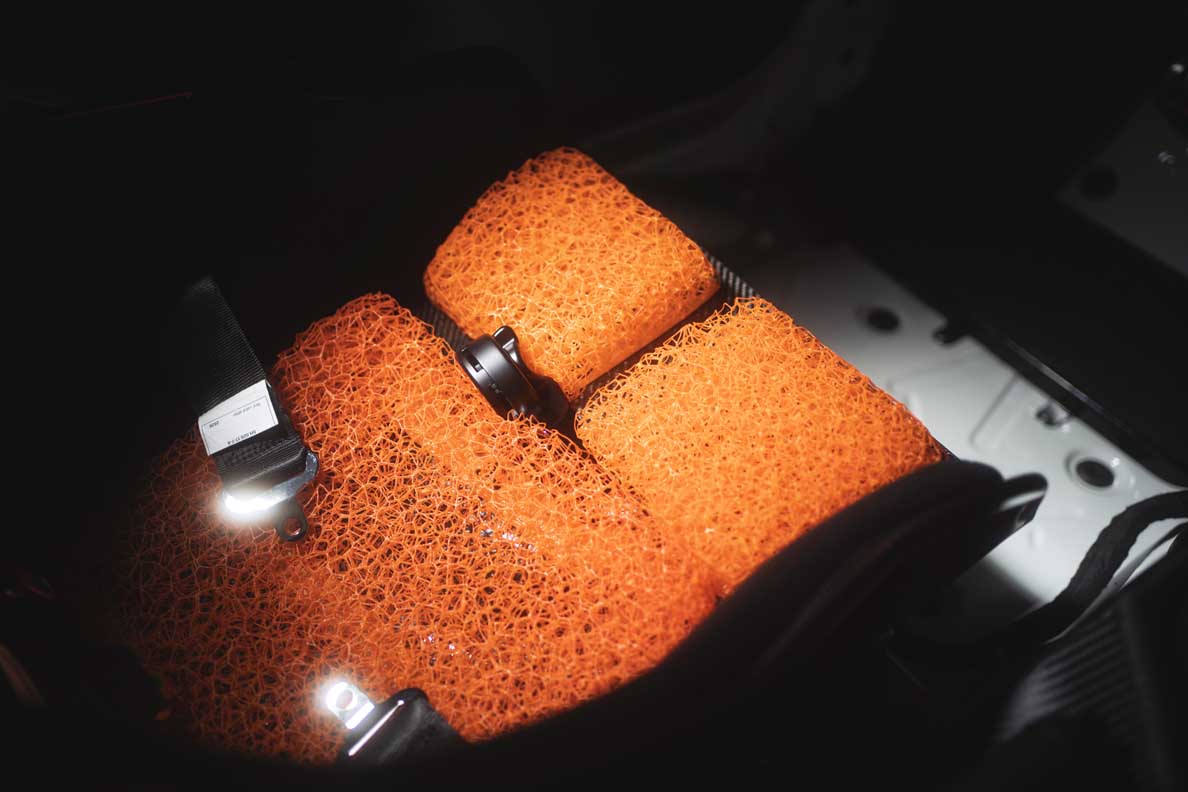 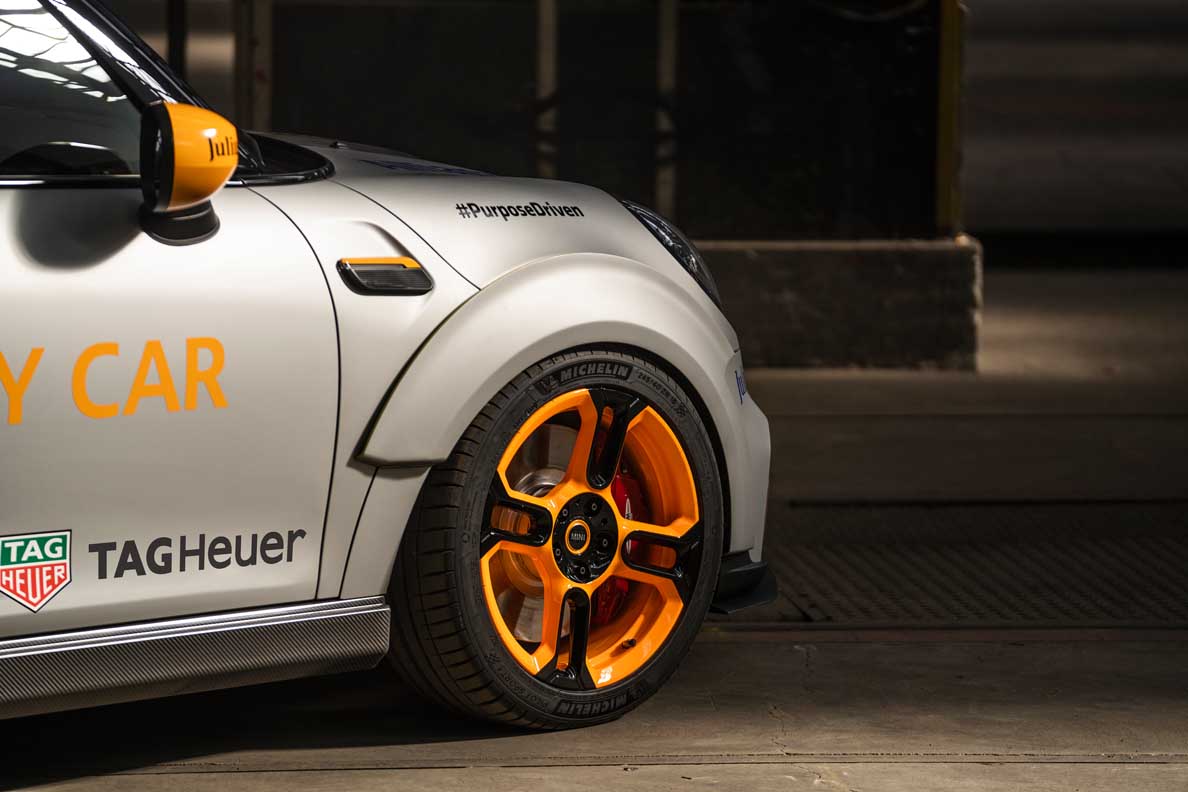 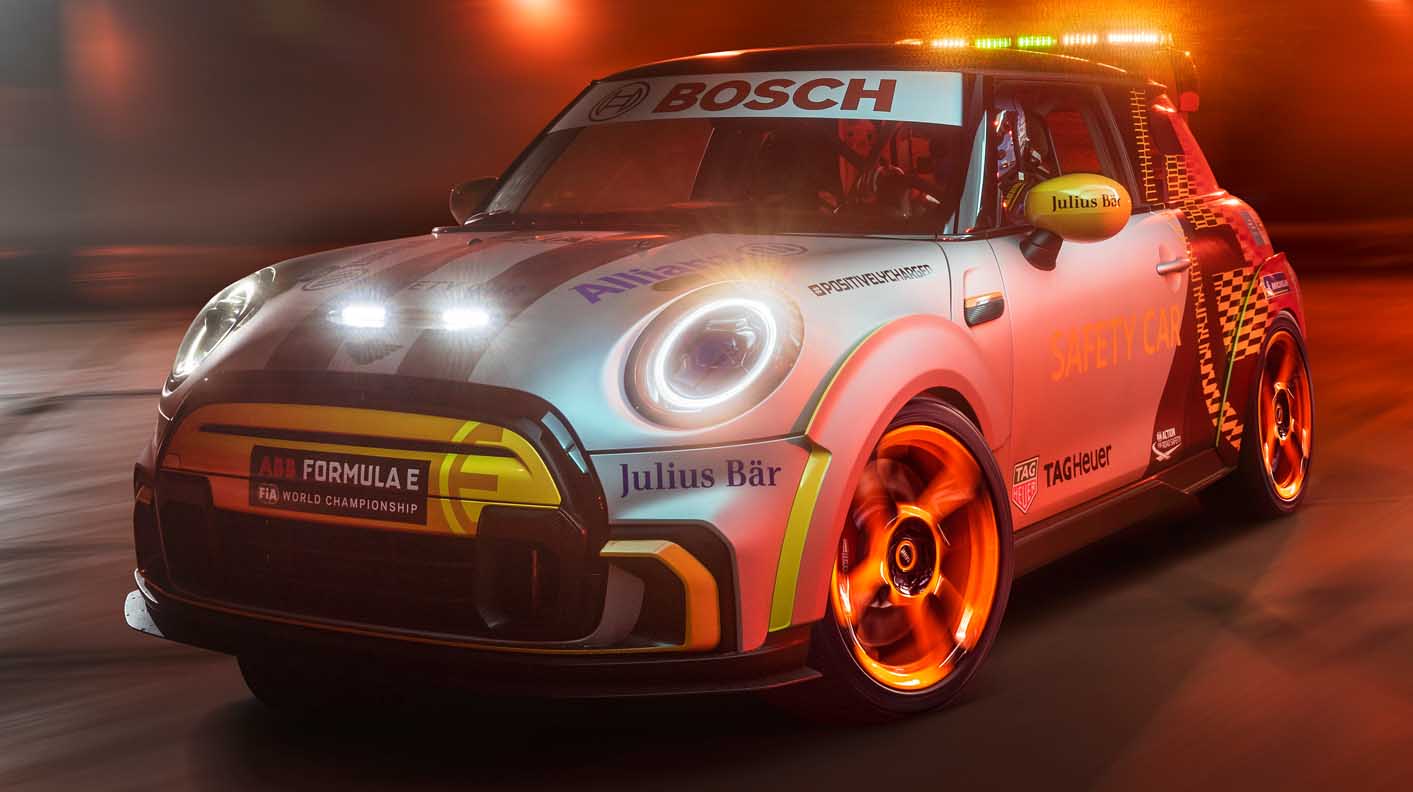 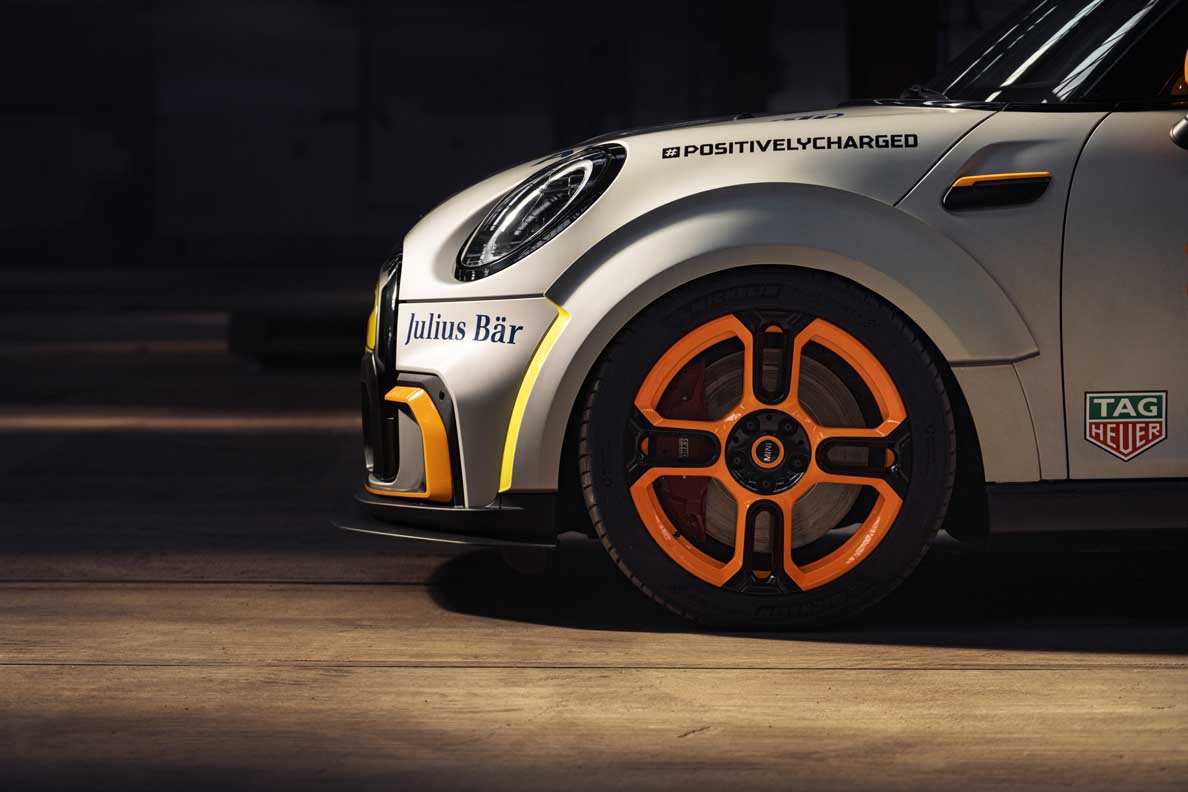 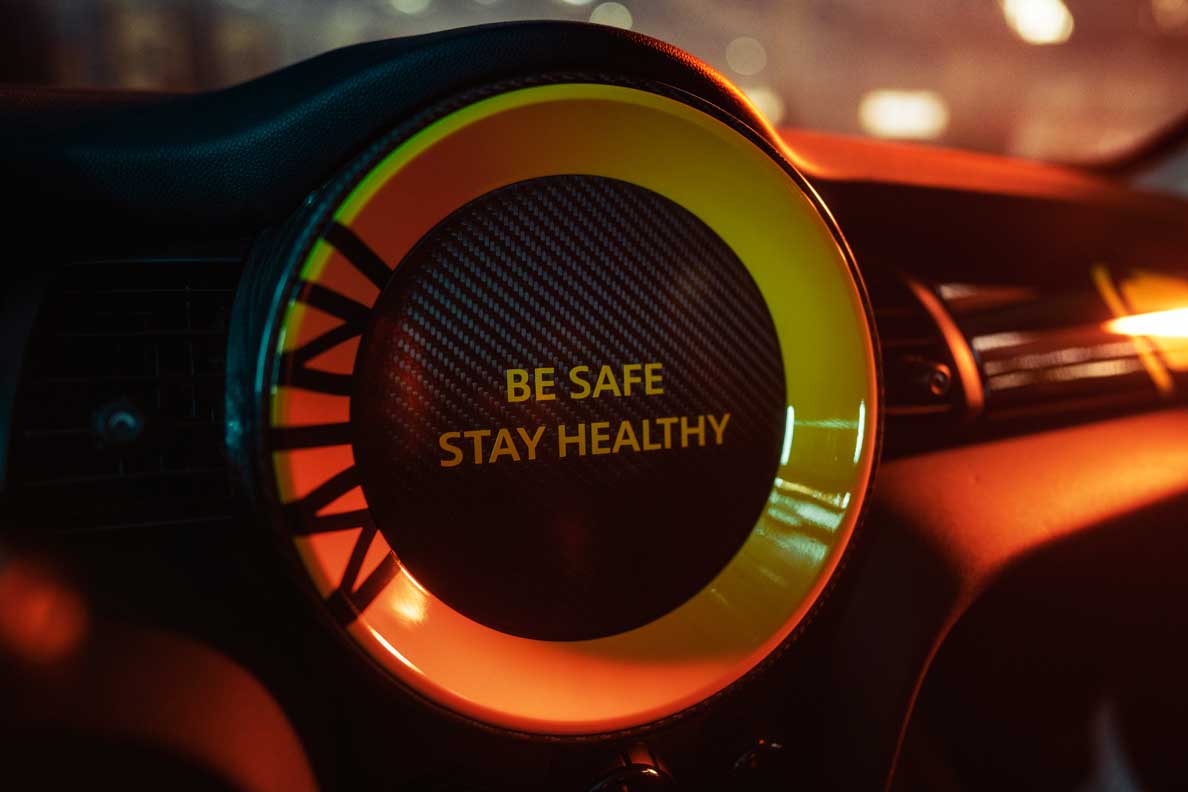 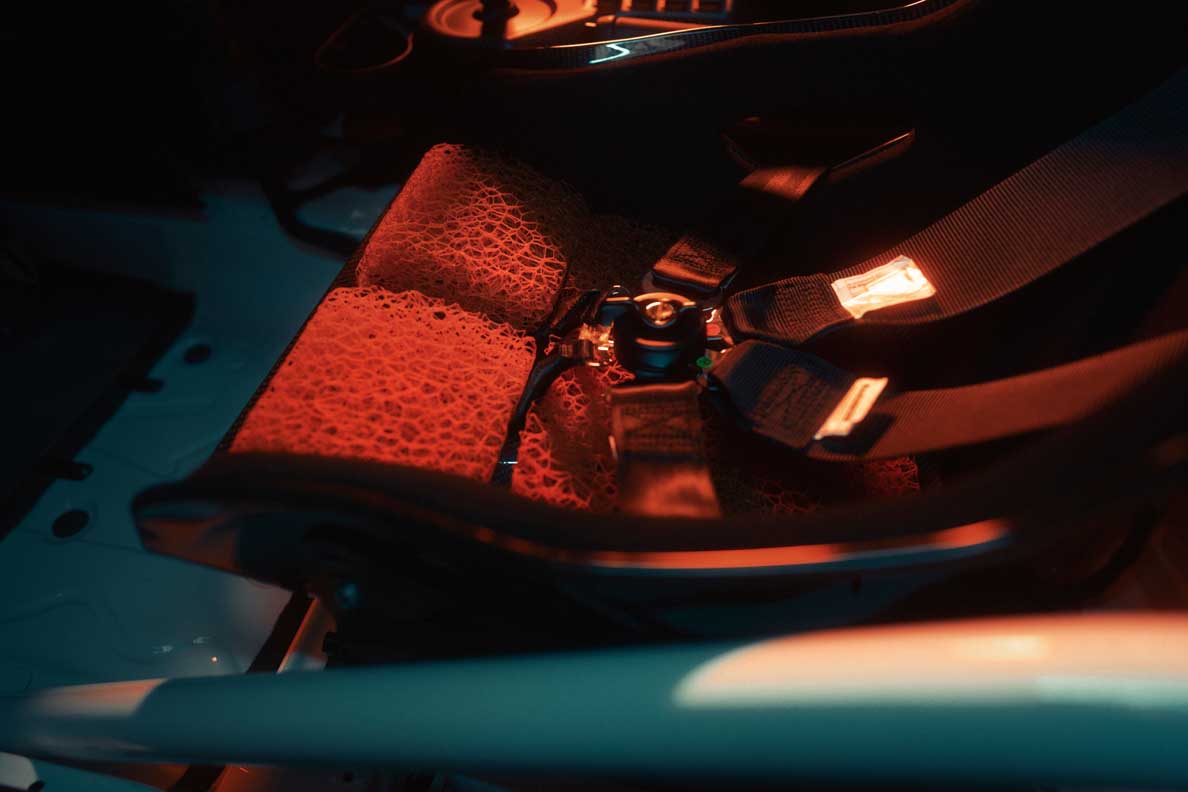 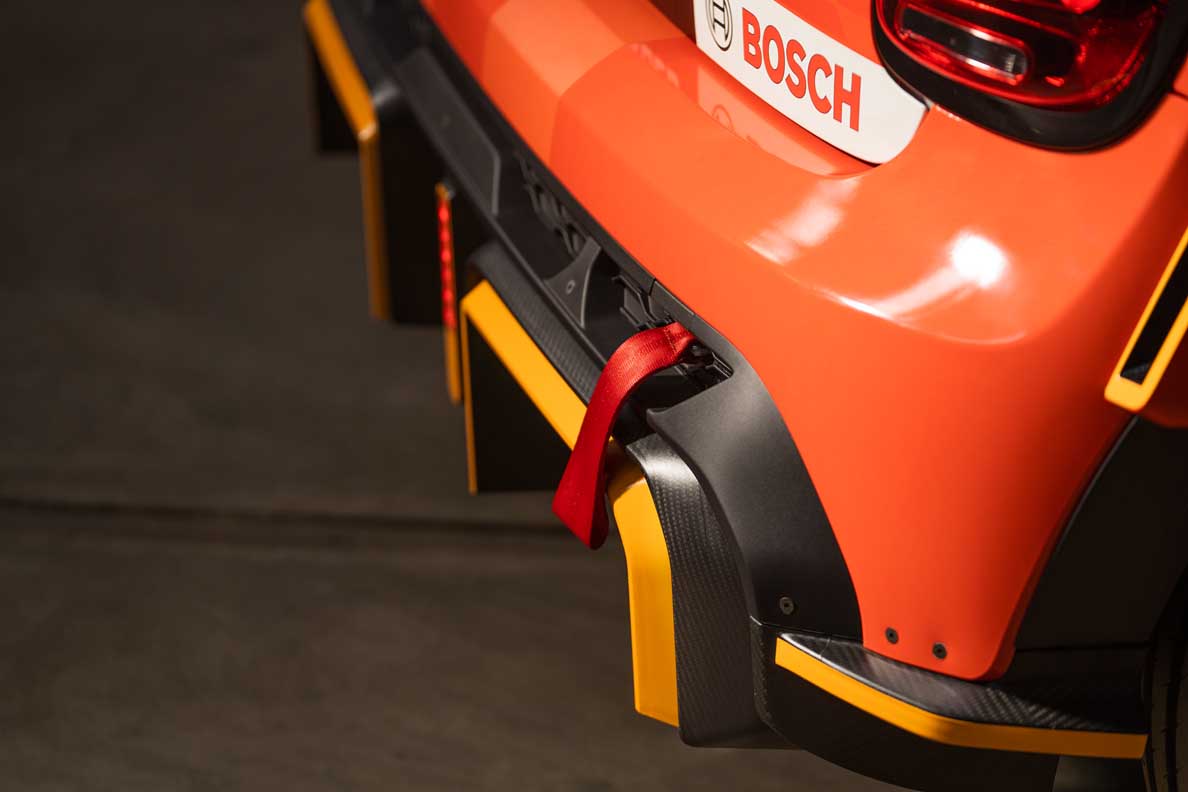 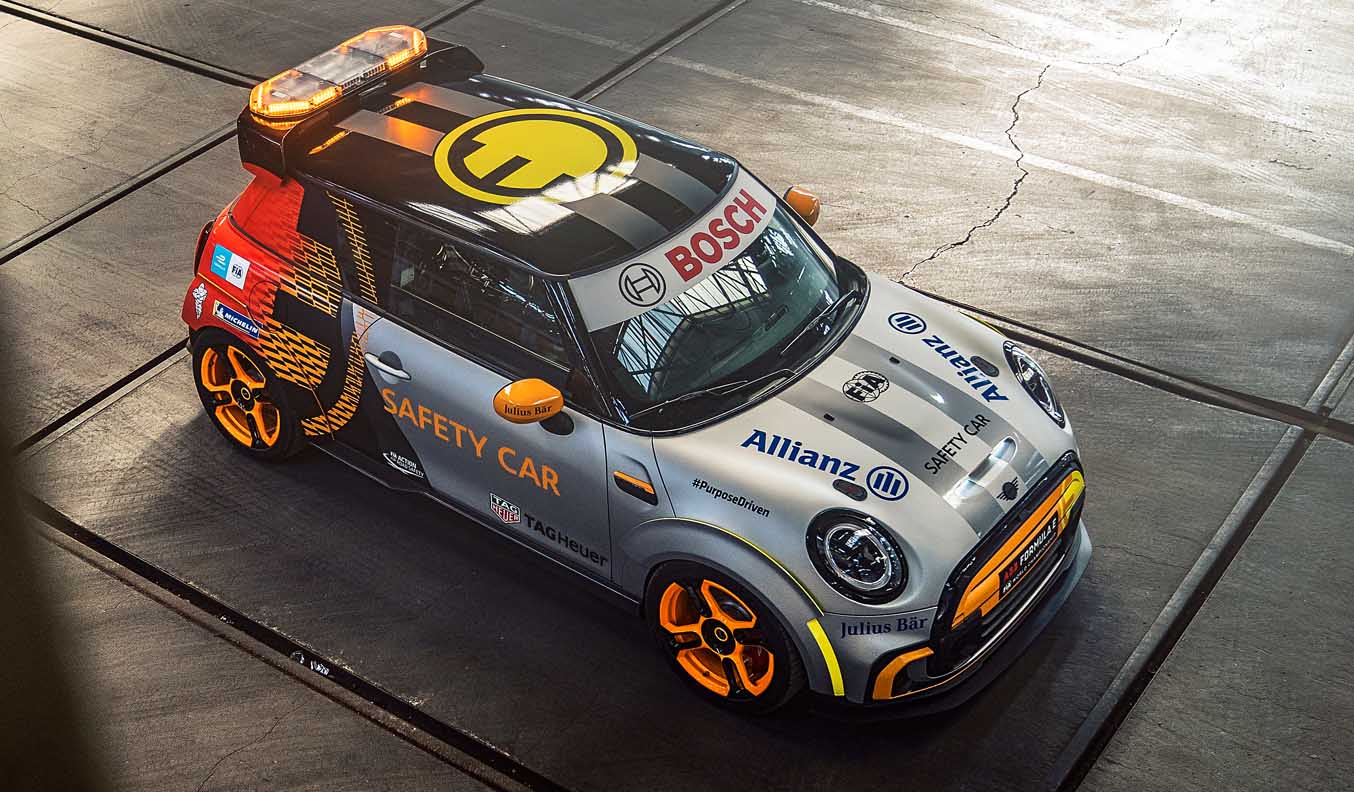 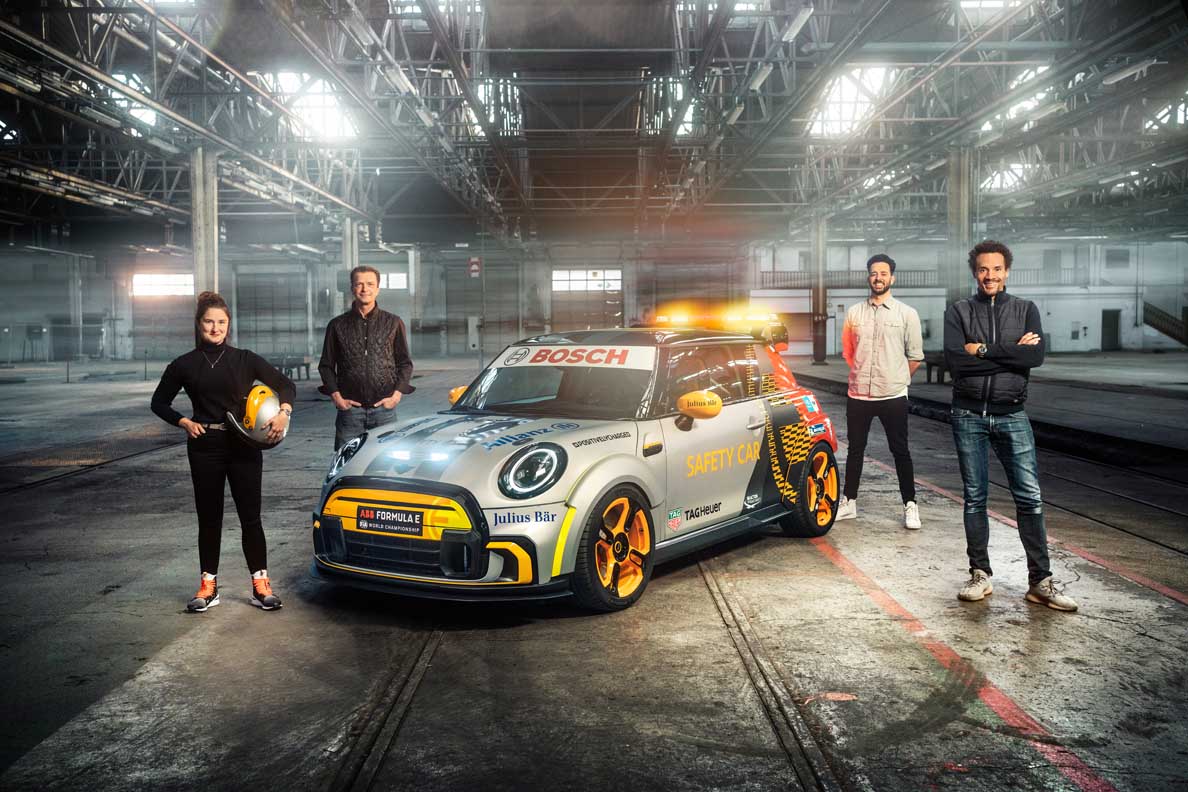 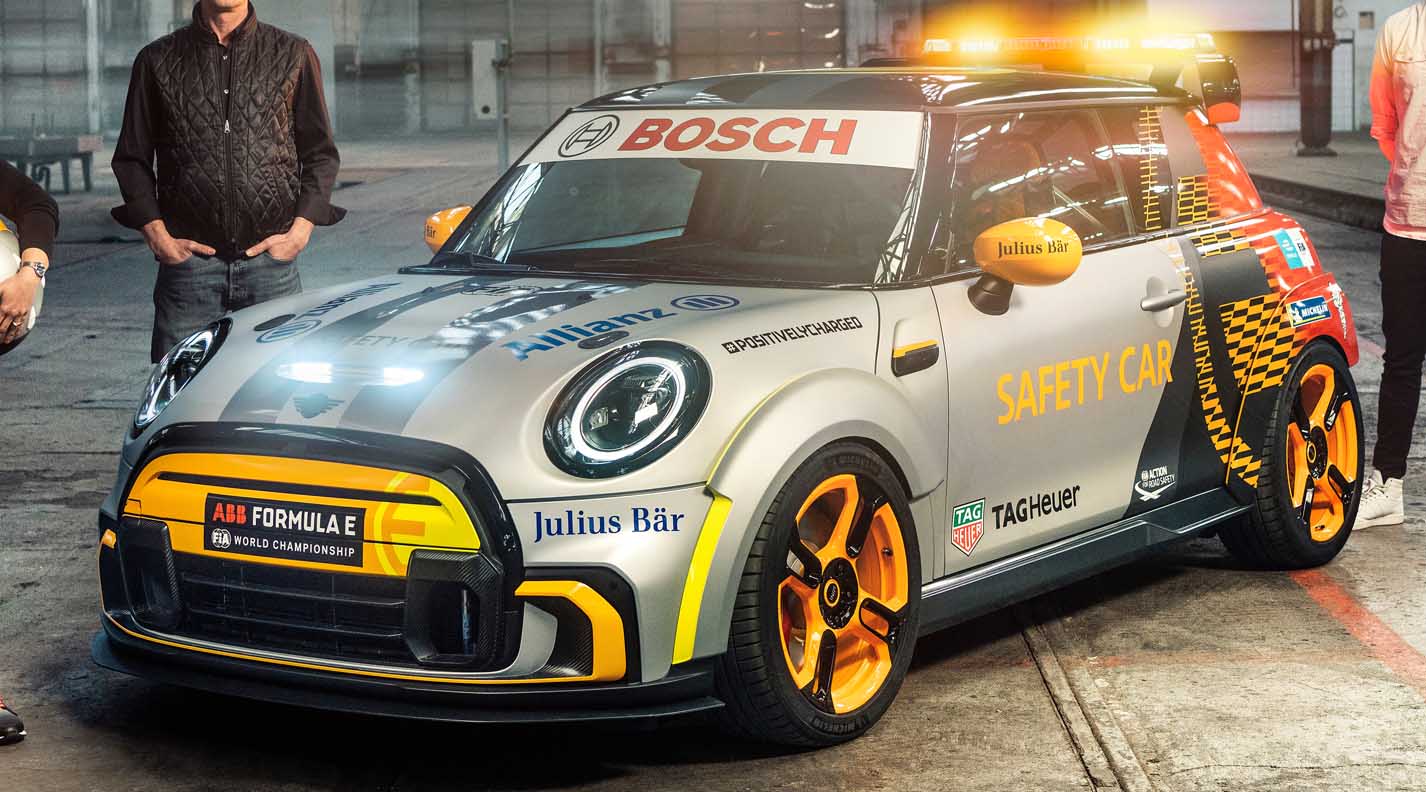 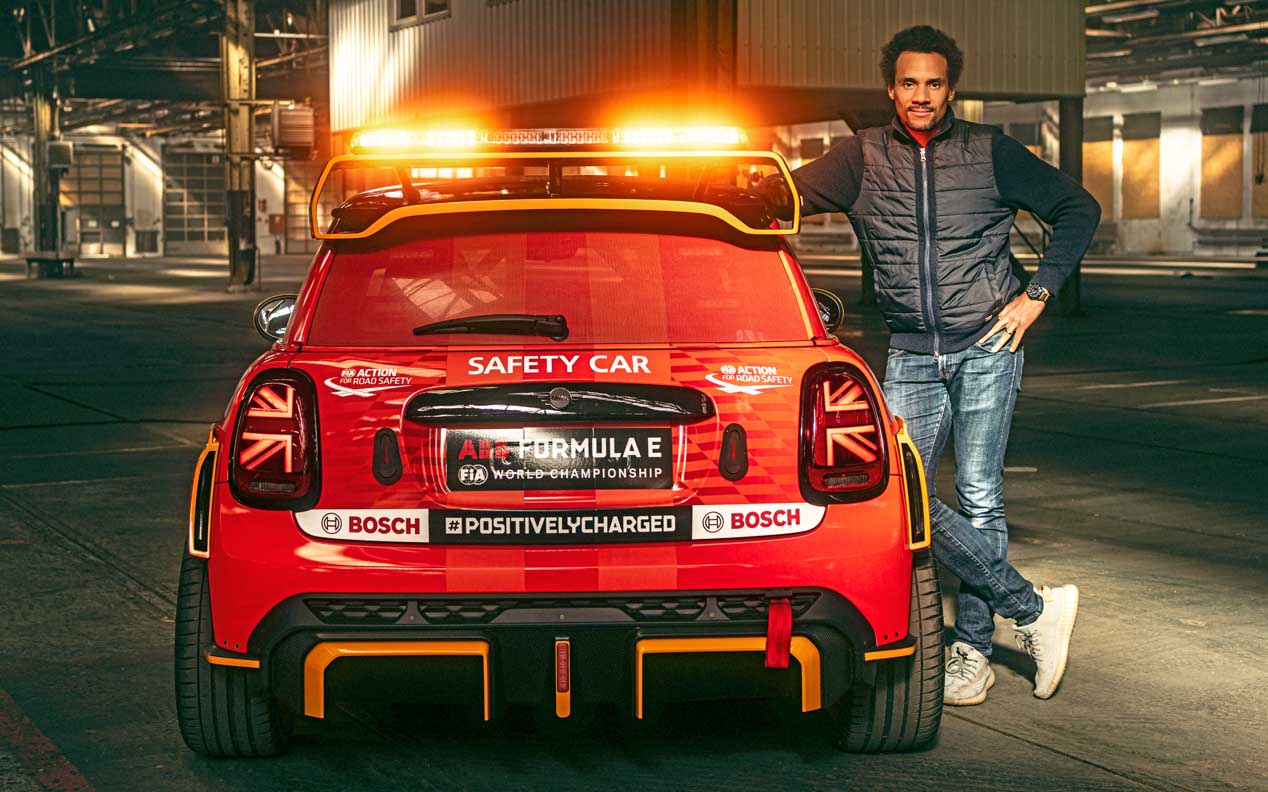 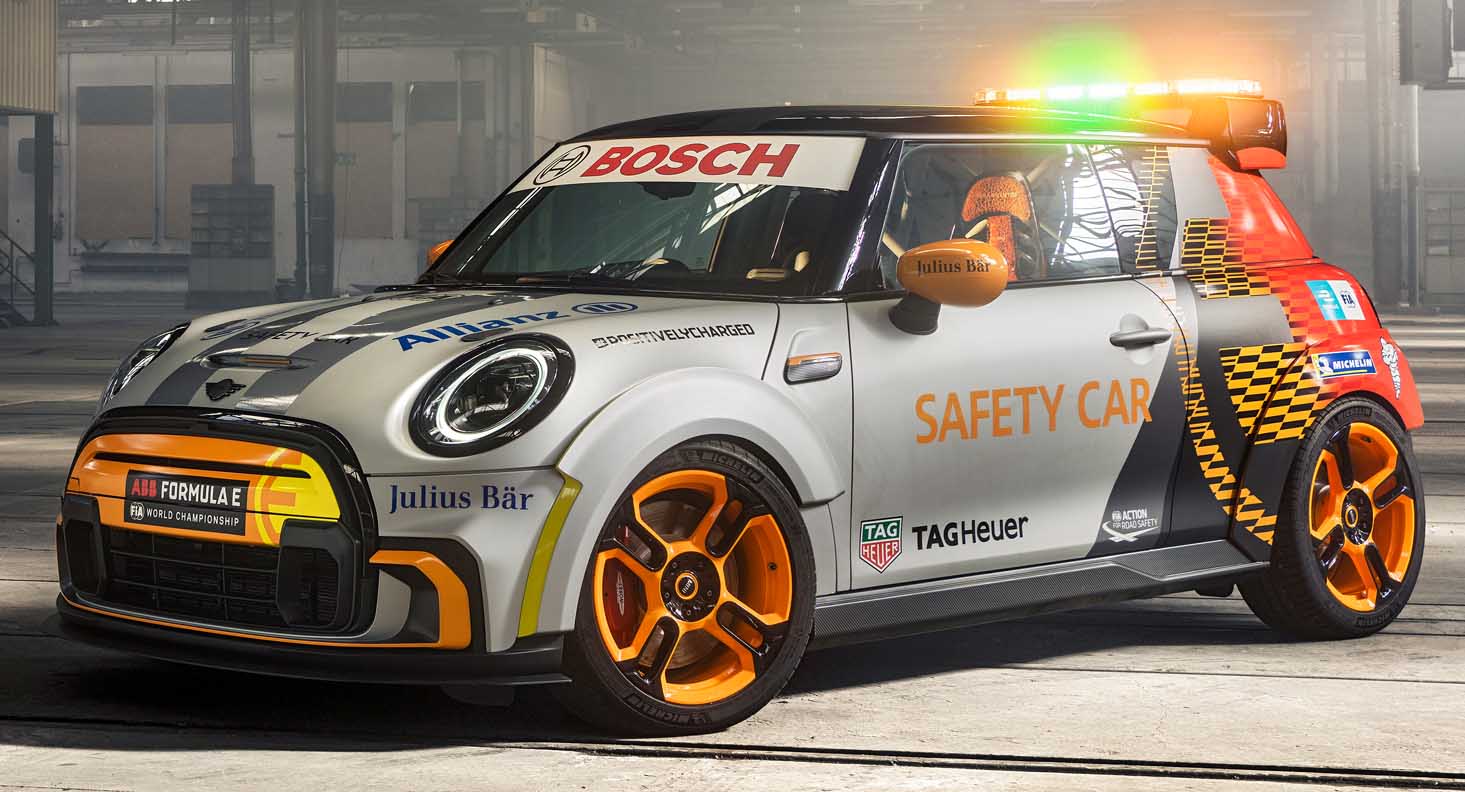