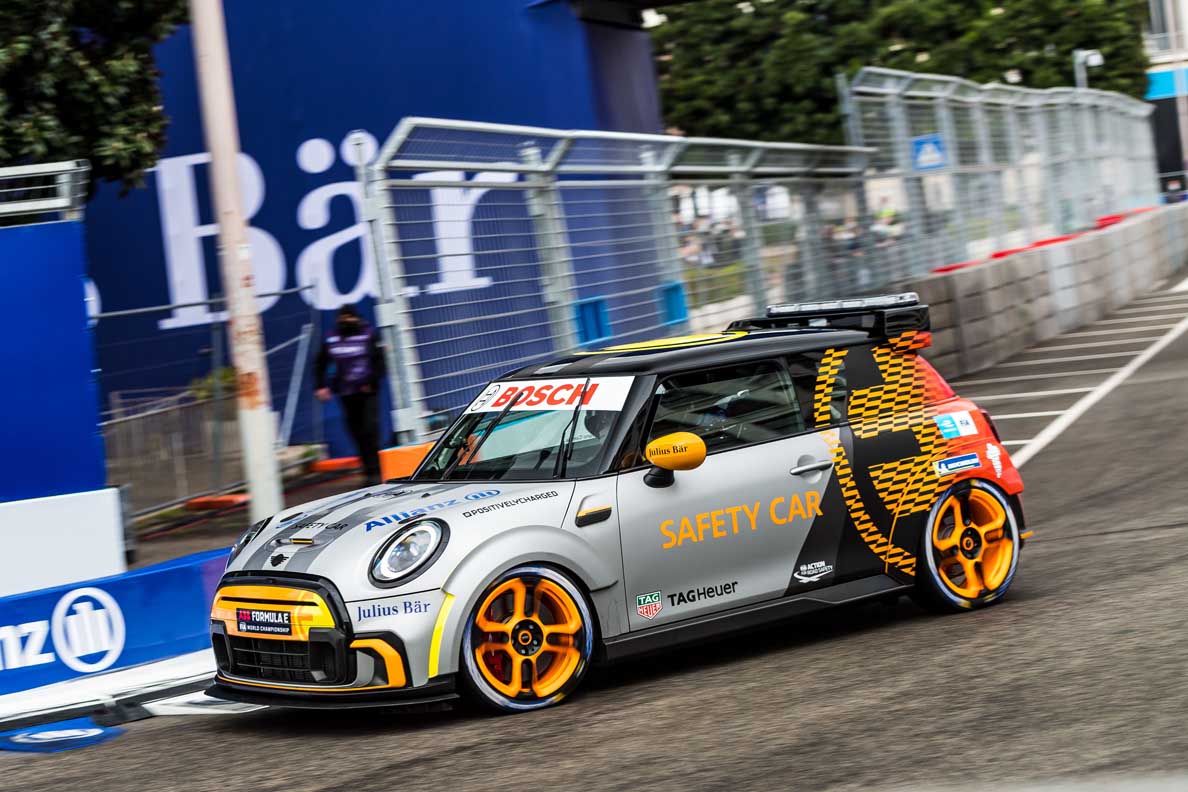 As ‘Official Vehicle Partner’, BMW Group has been closely linked with the ABB FIA Formula E World Championship since the very first race around seven years ago. Since the Rome E-Prix (ITA) at the weekend, a new FIA Formula E safety car leads the field: the MINI Electric Pacesetter inspired by JCW. The fully electric car was designed by BMW Motorsport such that racing technology makes it perfectly suited to the special requirements of a FIA Formula E safety car. FIA President Jean Todt and the official FIA Formula E safety car driver Bruno Correia (POR) were among those won over at a race weekend with plenty of safety car action.

“The ABB FIA Formula E World Championship is the top electric racing series as well as an efficient way to promote urban sustainable mobility,” said Todt. “The new Official Safety Car – the MINI Electric Pacesetter – is a case in point. As safety is one of the FIA’s top priorities, we’ve collaborated with BMW Group and Formula E to develop a car model to play this key role. I have had the pleasure to test it in Rome last weekend and its first outing has met the expectations. It has reminded me of nice memories as I started to compete in Rally in a Mini Cooper.“

In light of adverse weather conditions and turbulent races with several incidents, the new FIA Formula E safety car was called into action four times on its debut in Rome. Both races were started behind the MINI Electric Pacesetter inspired by JCW, and the race on Saturday even ended behind the safety car after incidents shortly before the finish. The incidents gave Correia plenty of opportunities to get to know the car.

“It is fantastic to have a fully electric car leading the Formula E field,” said Correia. “The MINI Electric Pacesetter is perfect for the narrow street circuits of the ABB FIA Formula E World Championship. The handling of the car is fantastic. And thanks to the modifications for use on the racetrack – for example, to the suspension and the brakes – the MINI is extremely fast and agile.”

The positive verdict of former racing driver Correia is a great description of the unique character of the MINI Electric Pacesetter inspired by JCW. In this instance, BMW Motorsport did not convert an existing road vehicle into the FIA Formula E Safety Car. Instead, the engineers used the new MINI Cooper SE (combined fuel consumption: 0.0 l/100 km; combined energy consumption: 17.6 – 15.2 kWh/100 km according to WLTP, 16.1 – 14.9 kWh/100 km according to NEFZ, combined CO2 emissions: 0 g/km) as a basis to design a totally new safety car.

“We approached the project both in terms of safety and handling as if we were building a racing car, and started with the body in white of the MINI Cooper SE,” described Rudolf Dittrich, head of vehicle development at BMW Motorsport. “The result is a car that sets standards in braking power, cornering performance and agility. And it is precisely these areas that are crucial on the narrow street circuits in Formula E.”

The brakes are largely identical in construction to those of the MINI John Cooper Works GP (combined fuel consumption: 7.3 l/100 km, combined CO2 emissions: 167 g/km). For the chassis, the basic concept was adopted from production; however, numerous components (for example, the spring damper system) were replaced with motorsport elements. A totally new feature is the Kevlar underride guard familiar from rallying, and which primarily protects the battery of the MINI Electric Pacesetter inspired by JCW when driving roughly over kerbs. The size, profile and rubber compound of the tyres have also been modified for use as a safety car.

Through the consistent use of carbon and CFRP in the construction of the specific bodywork modifications, some of which were even produced using 3D printing, the BMW Motorsport engineers were able to achieve a weight reduction of around 130 kg compared with the production model, and thus an unladen weight of around 1,230 kg. The safety car contains all the modules required by the FIA for passive safety. In the interior, the driver has all the required systems such as radio, GPS, transponder and the control panels for the lighting system. 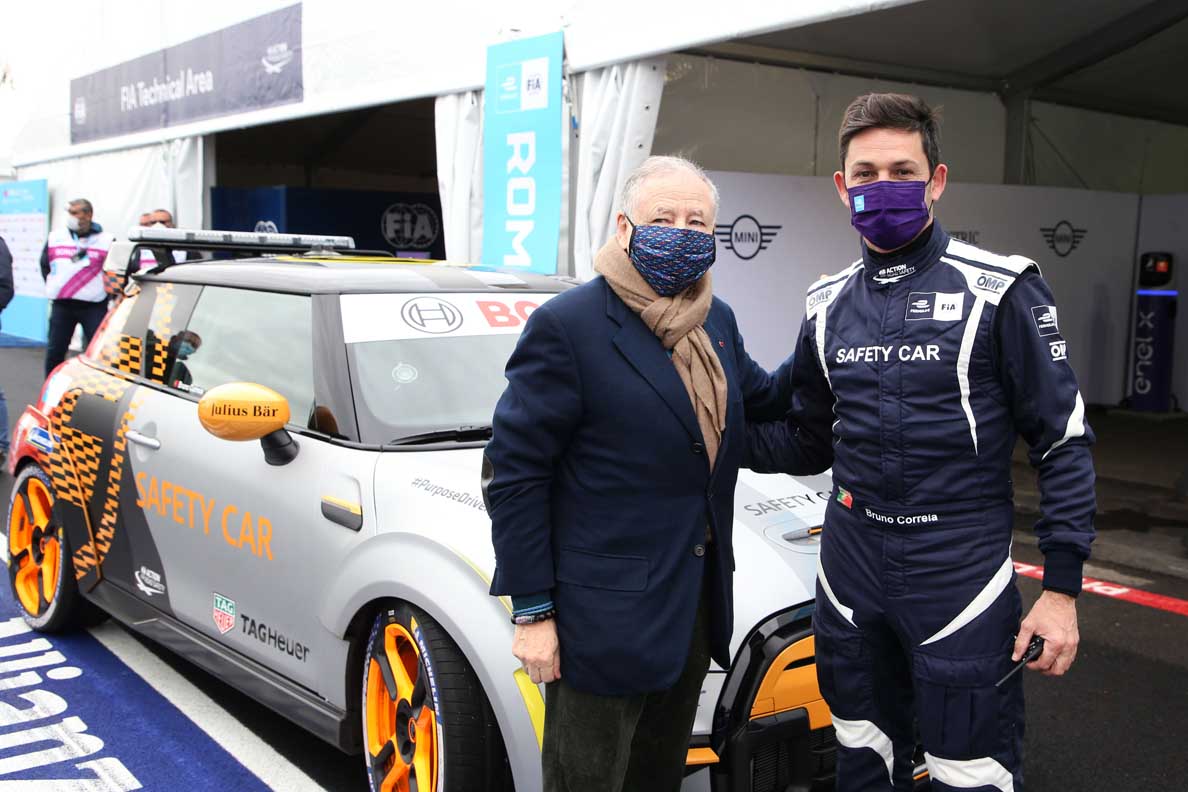 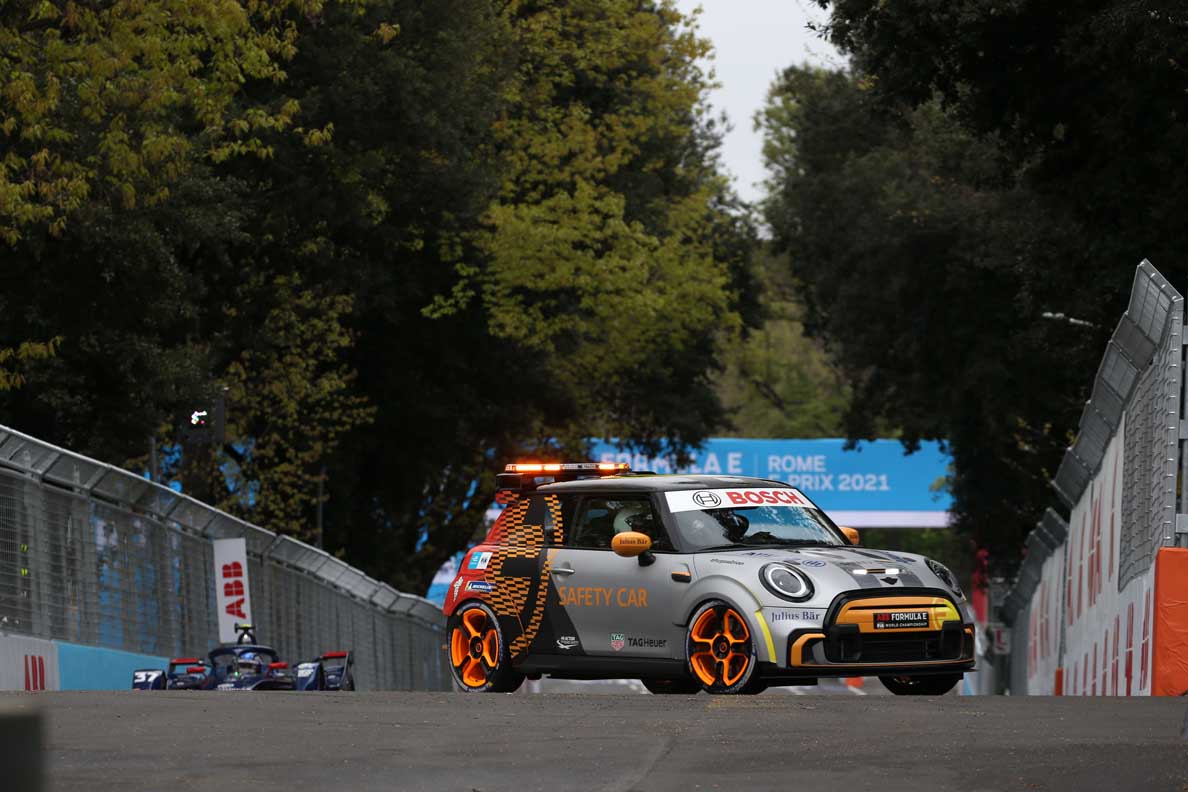 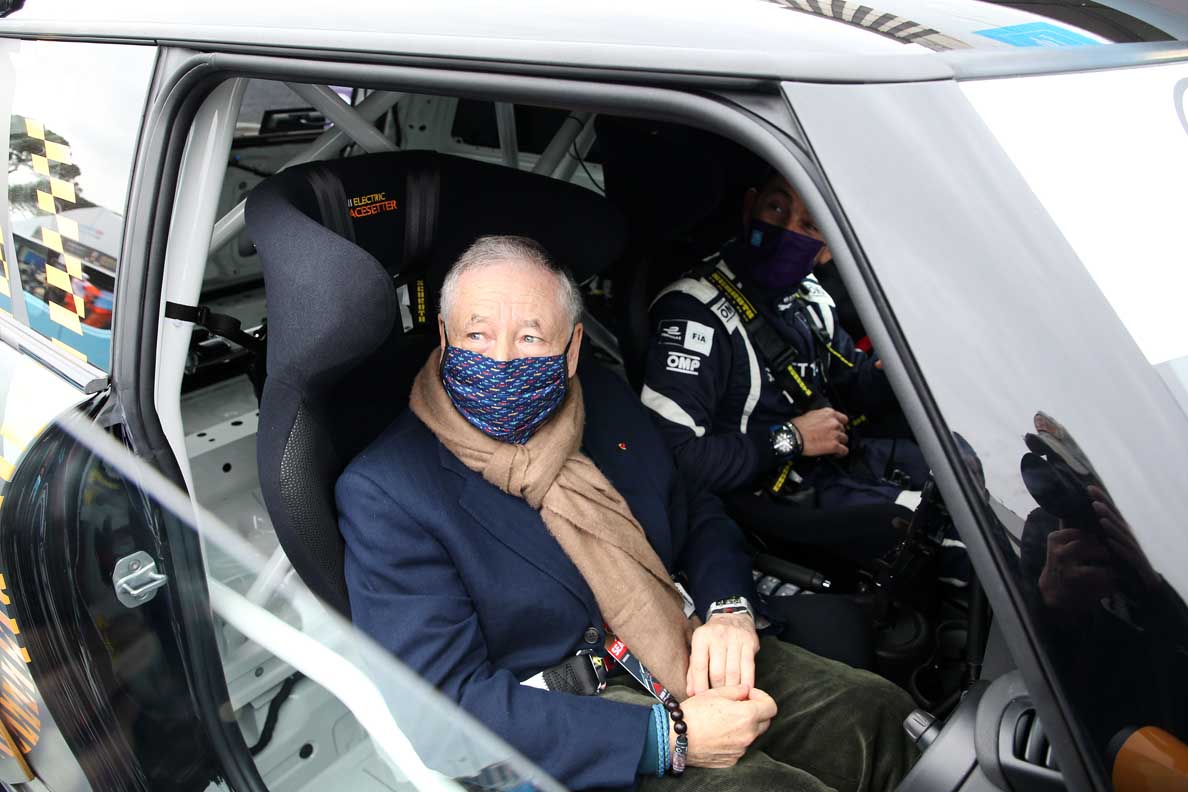 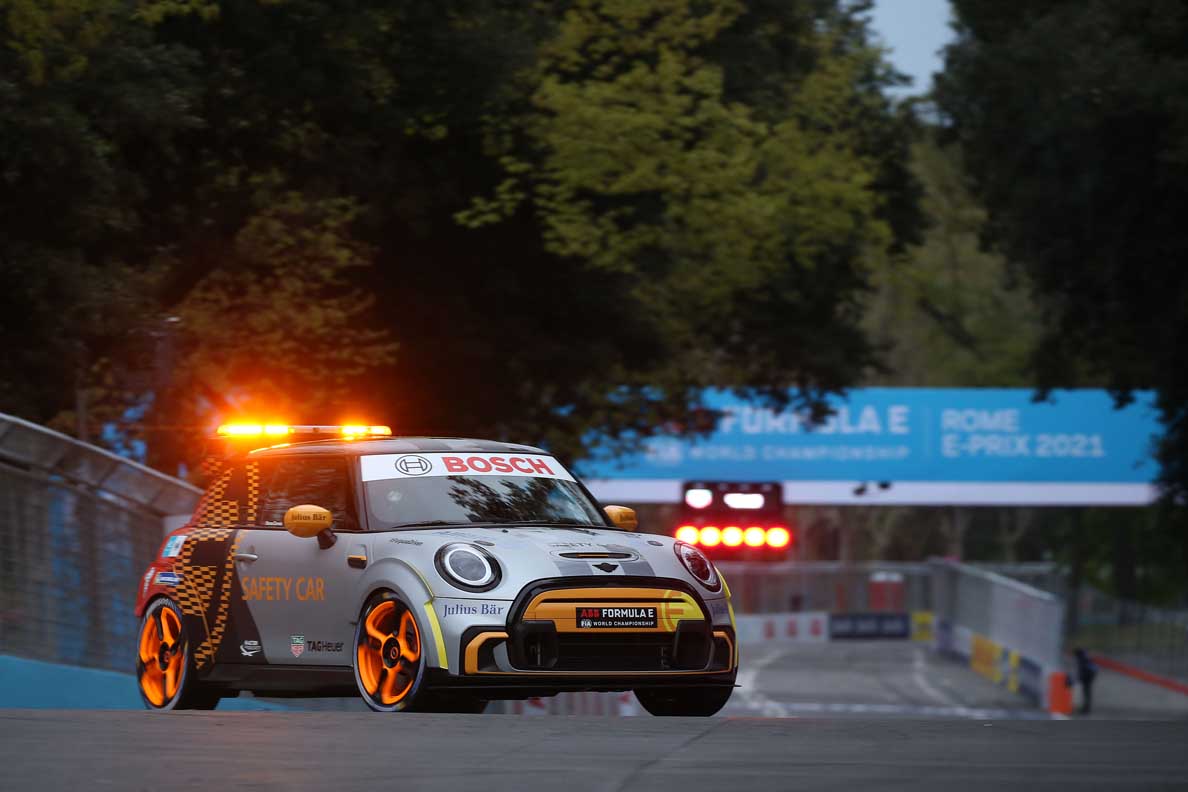 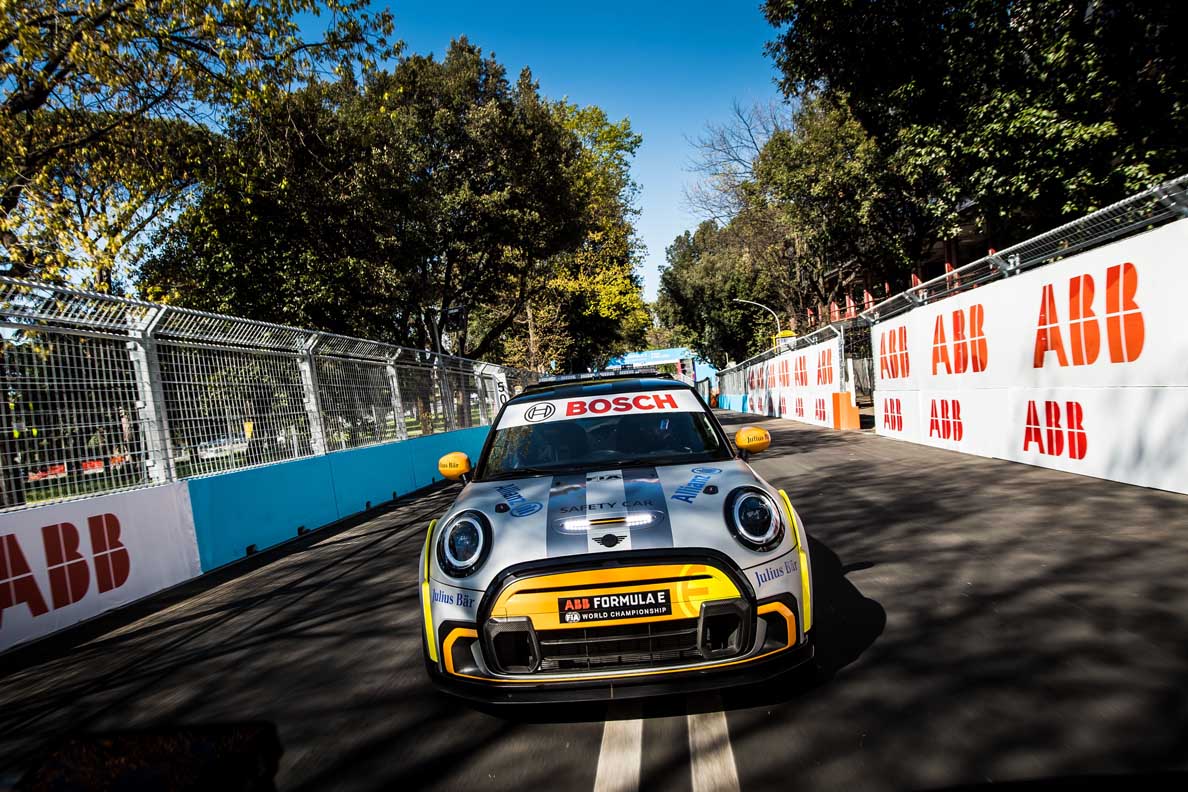 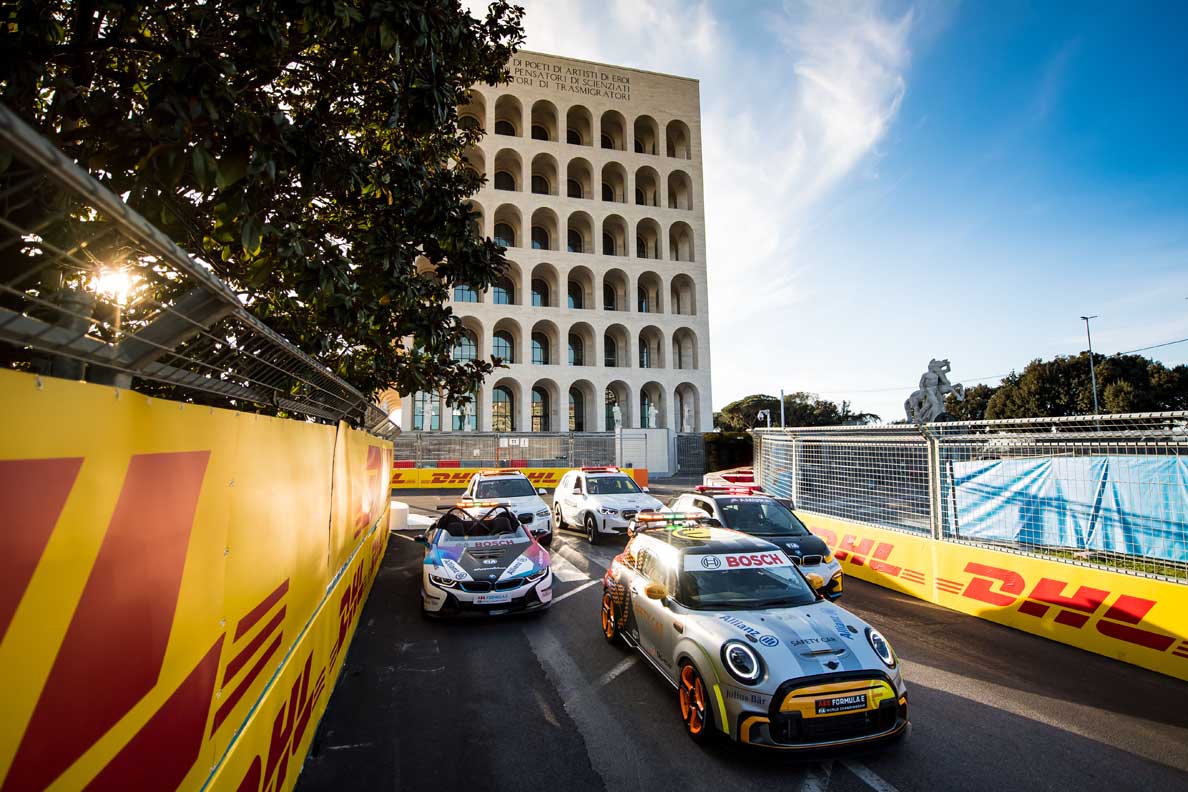 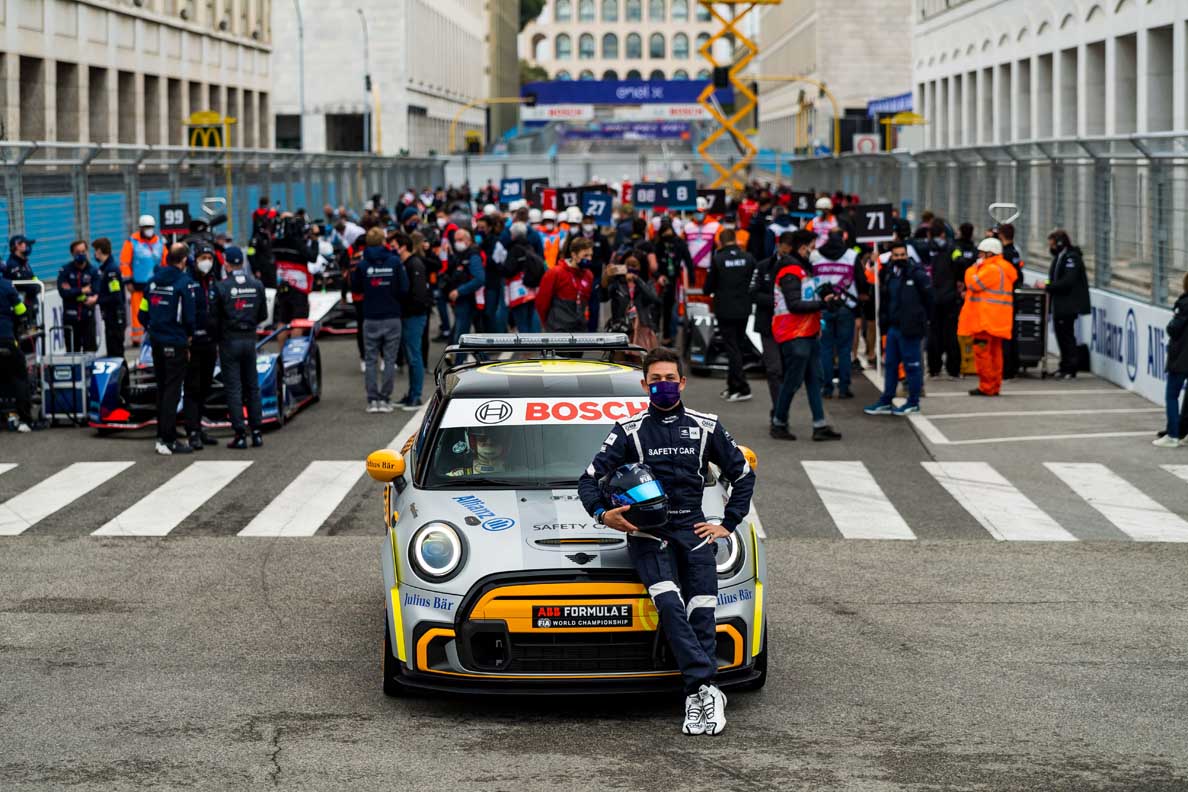 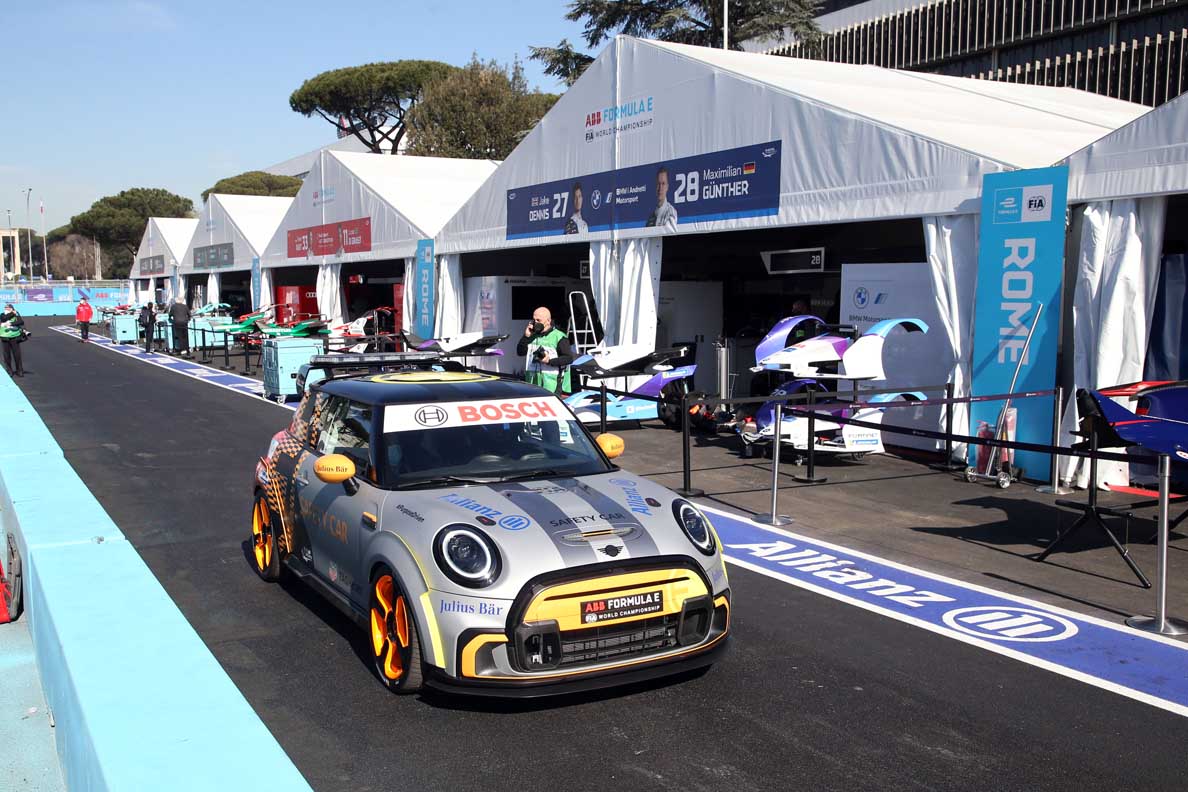 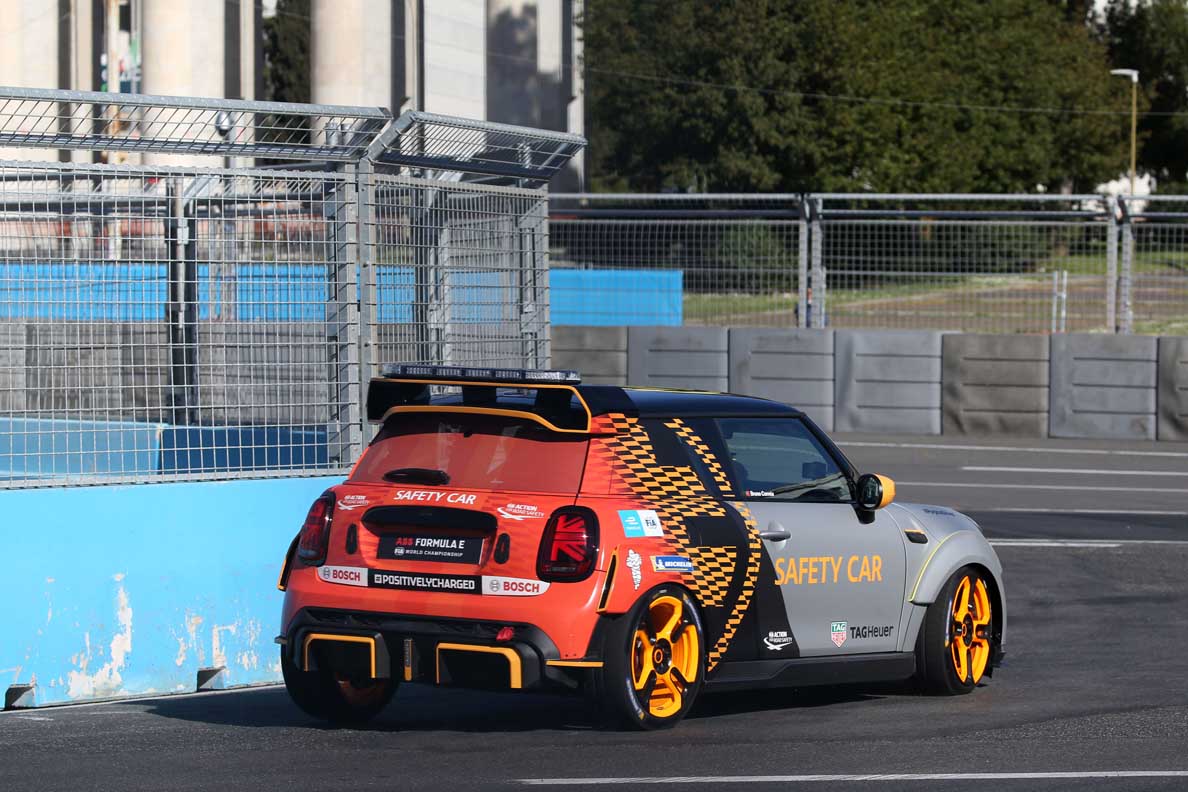 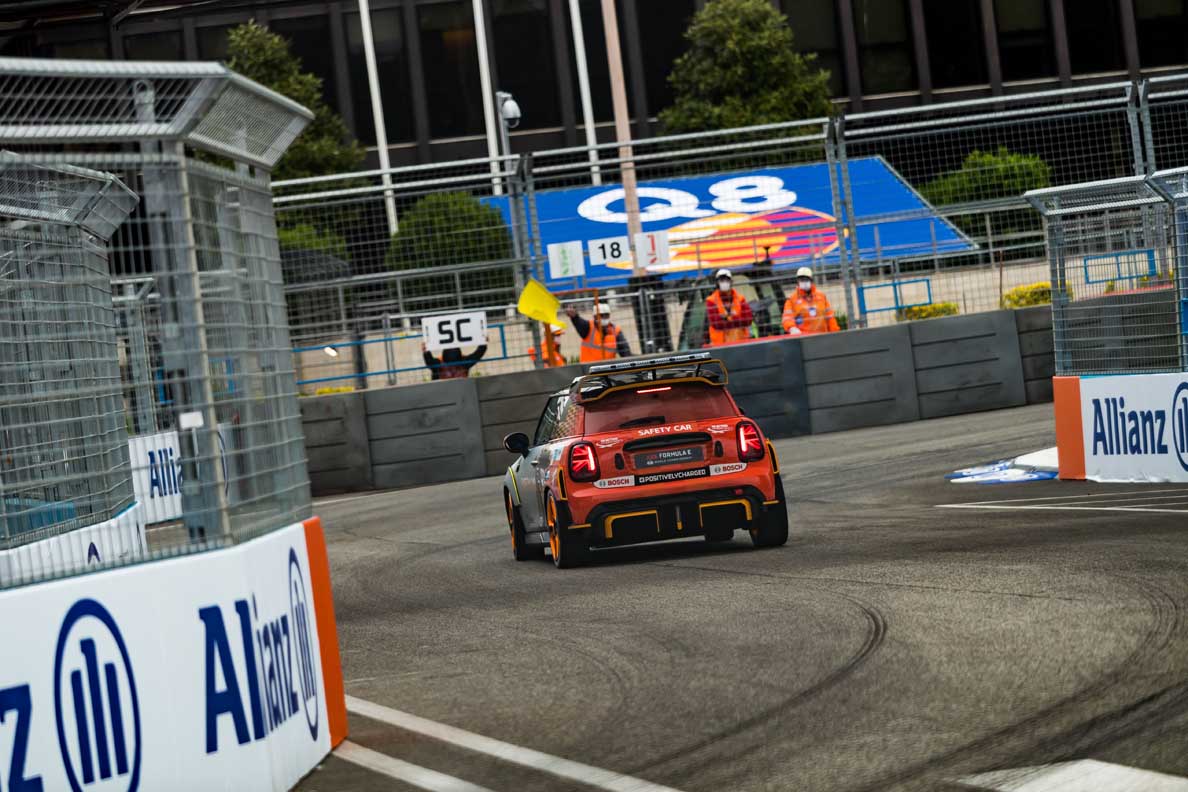 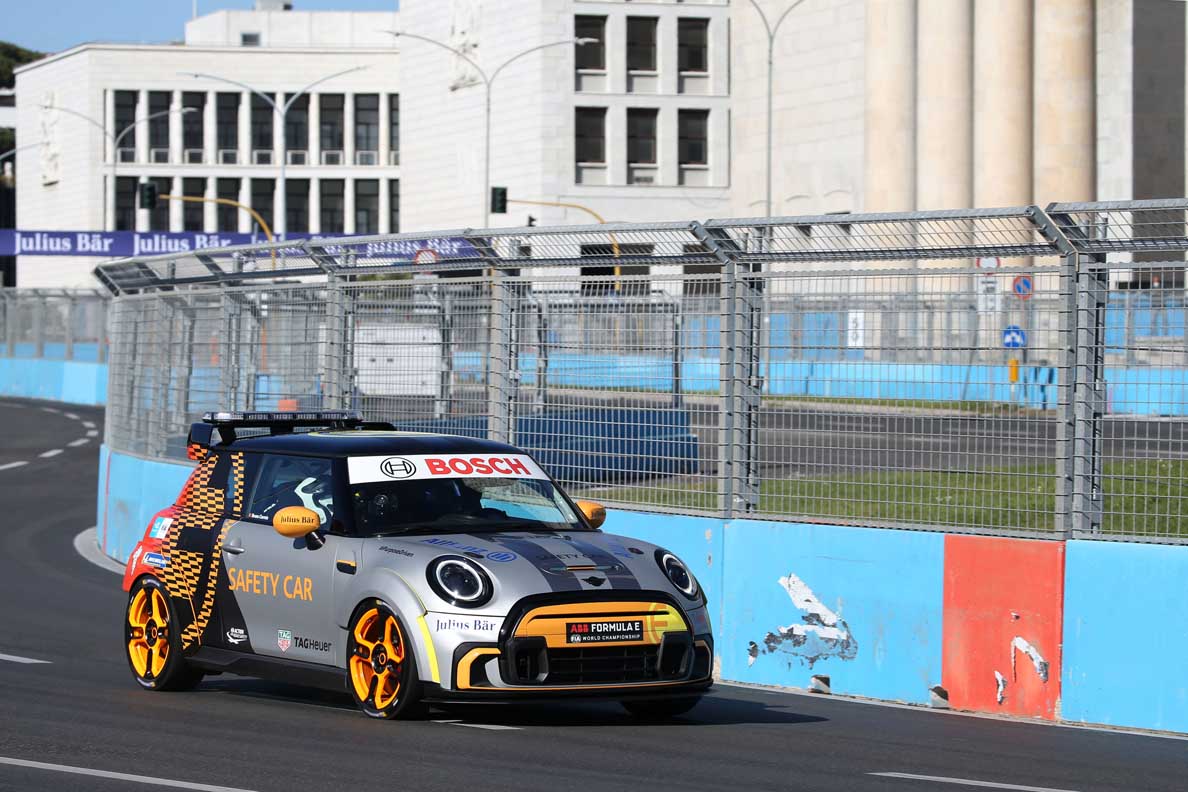 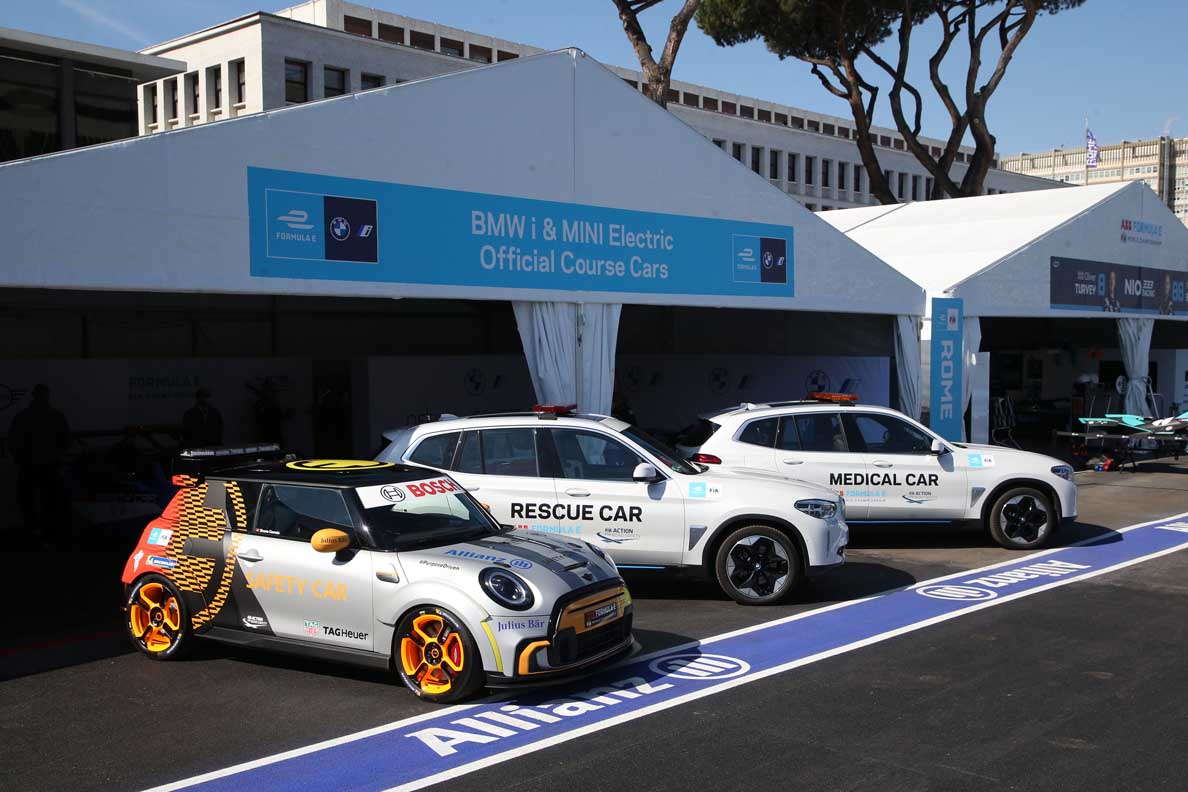 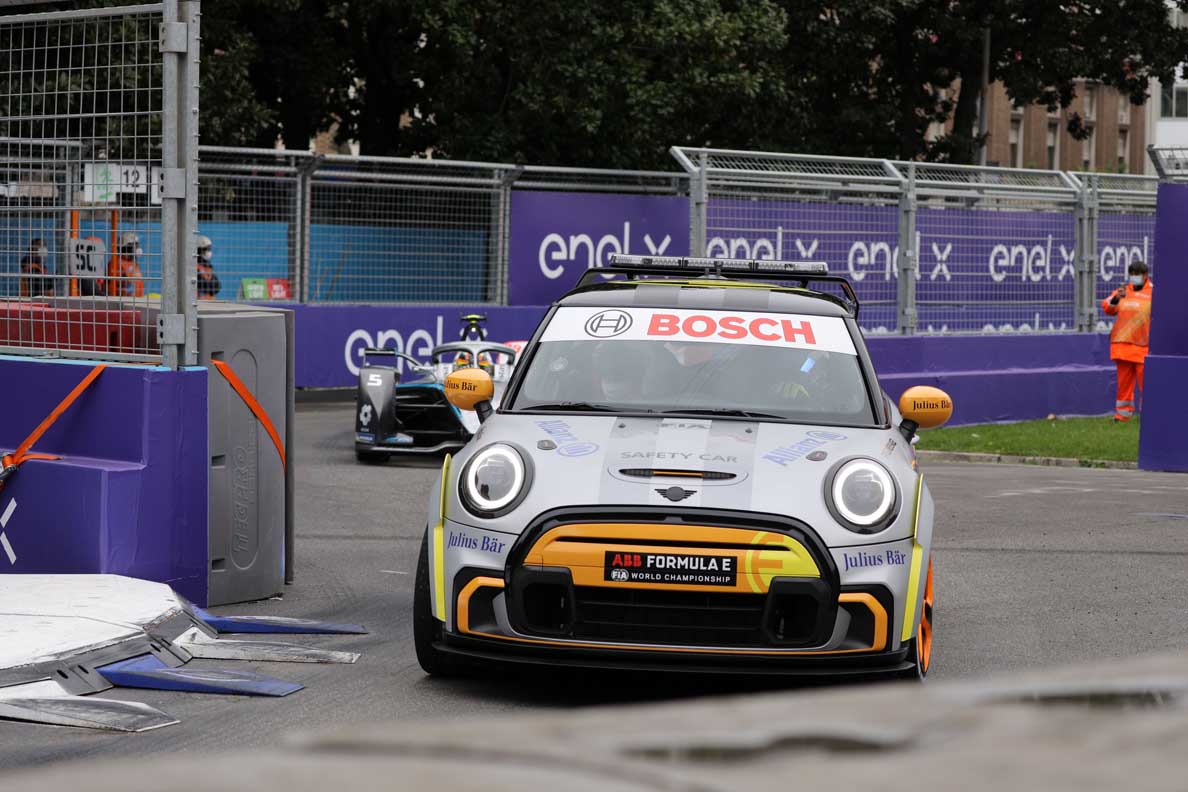 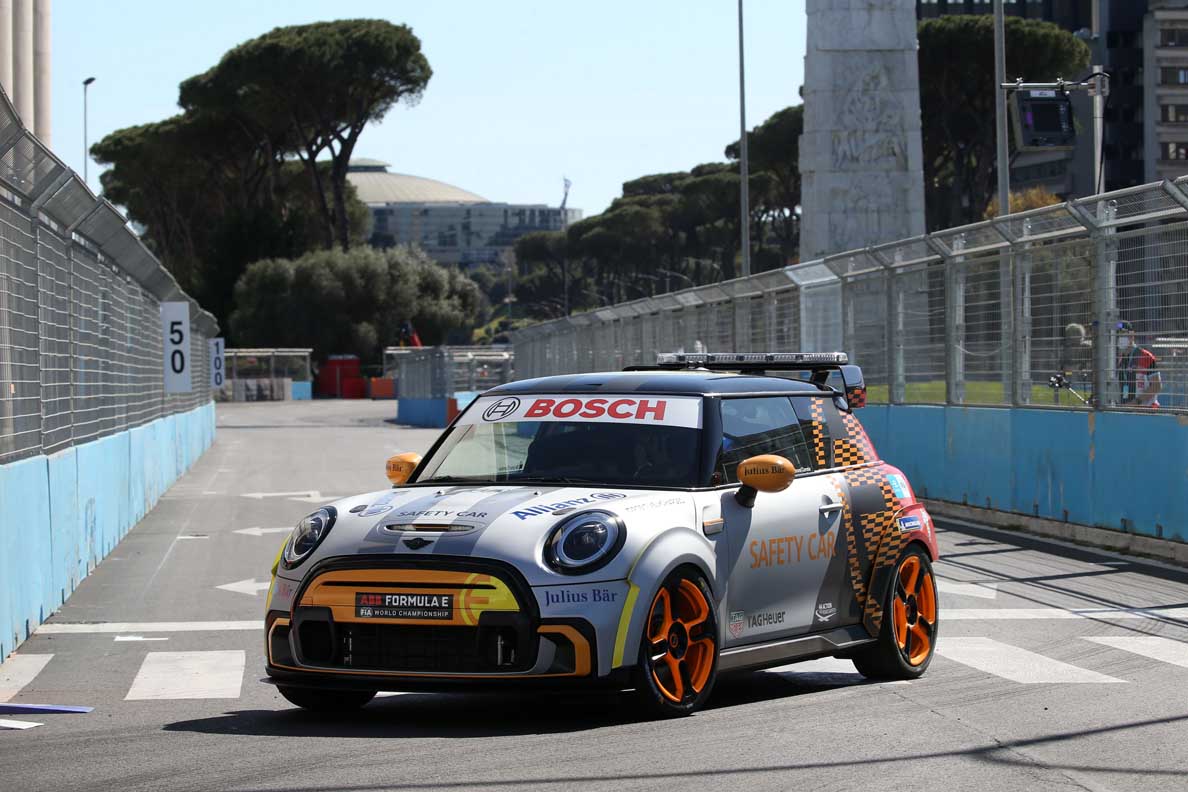 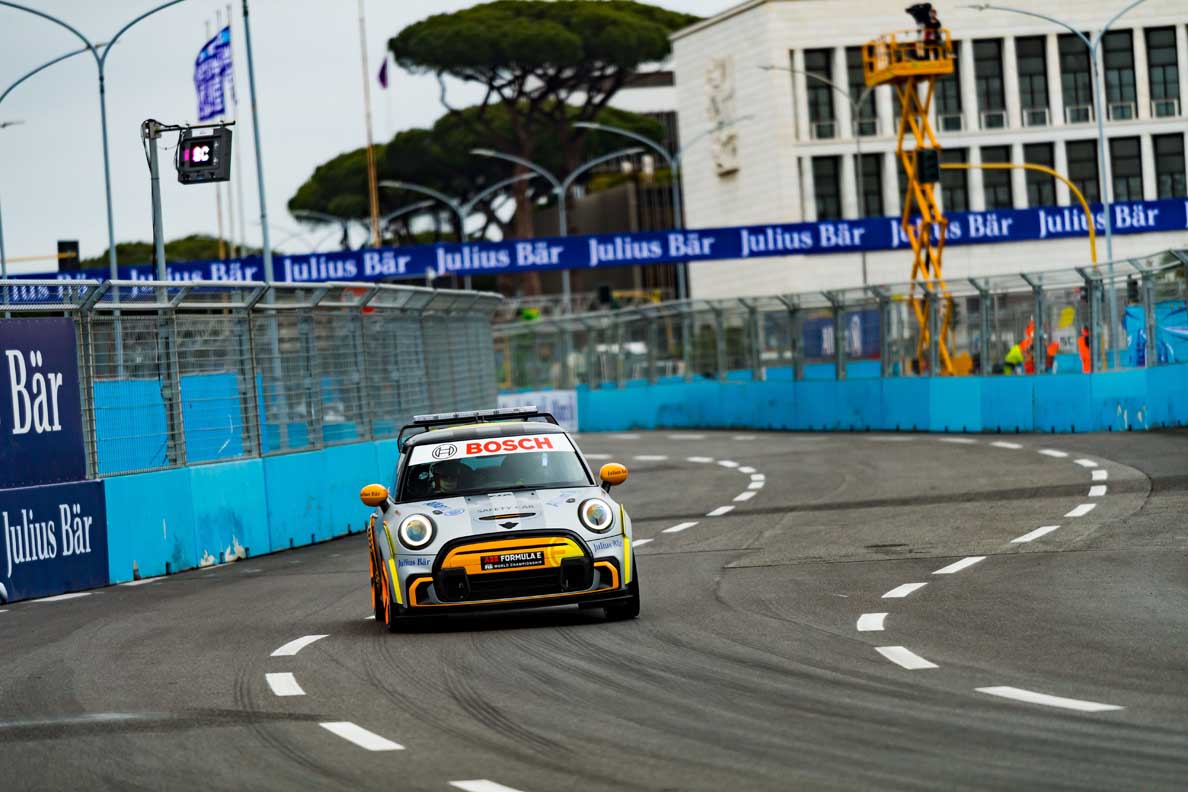 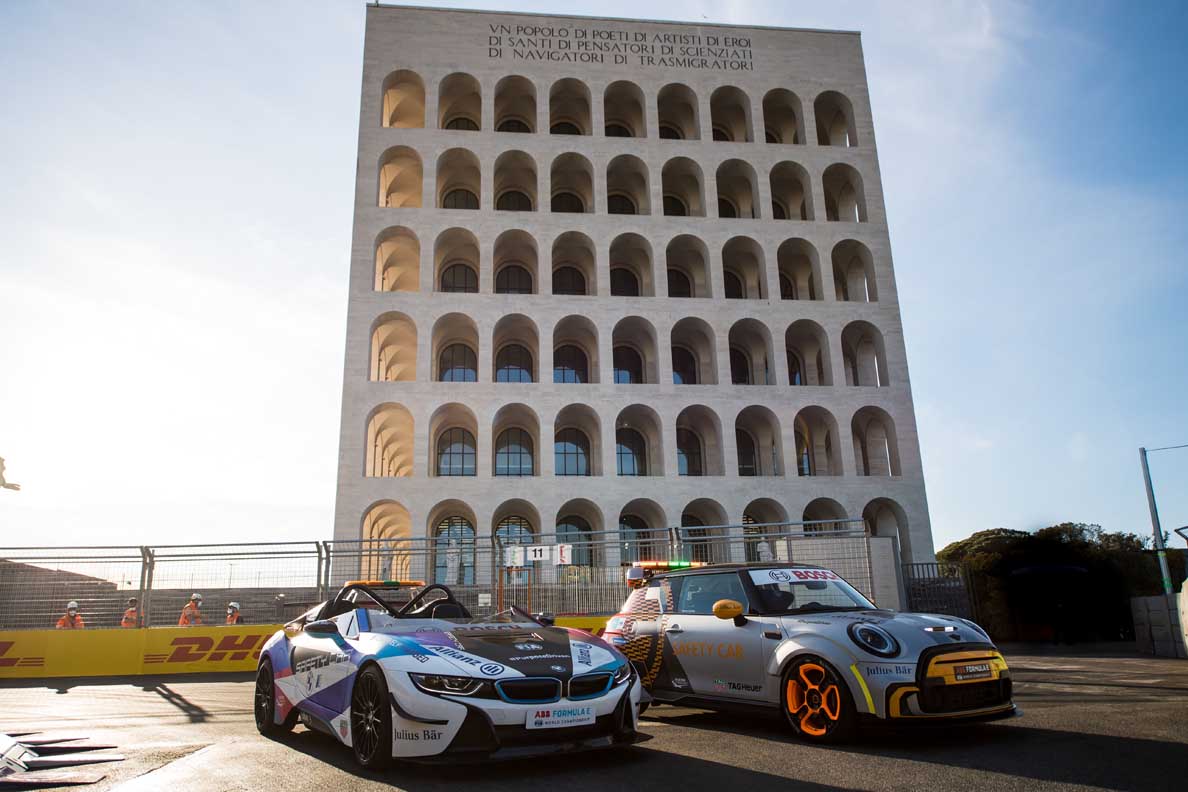 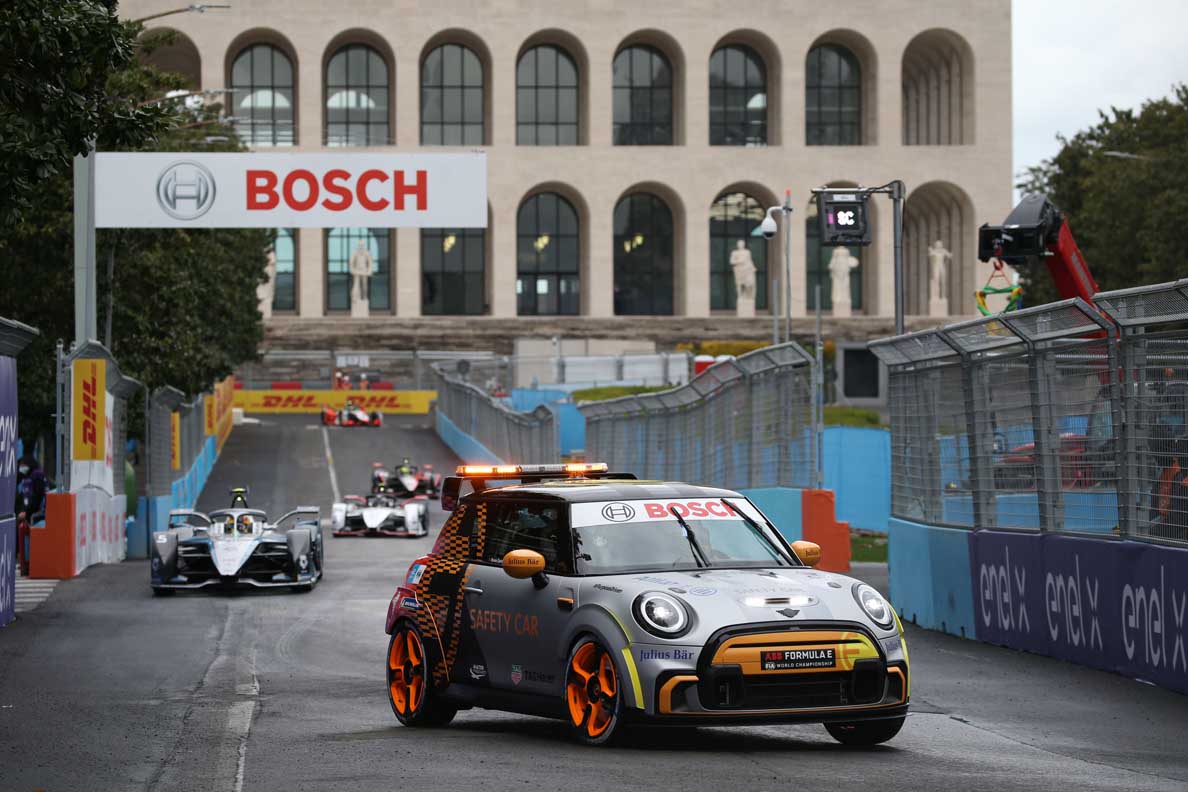