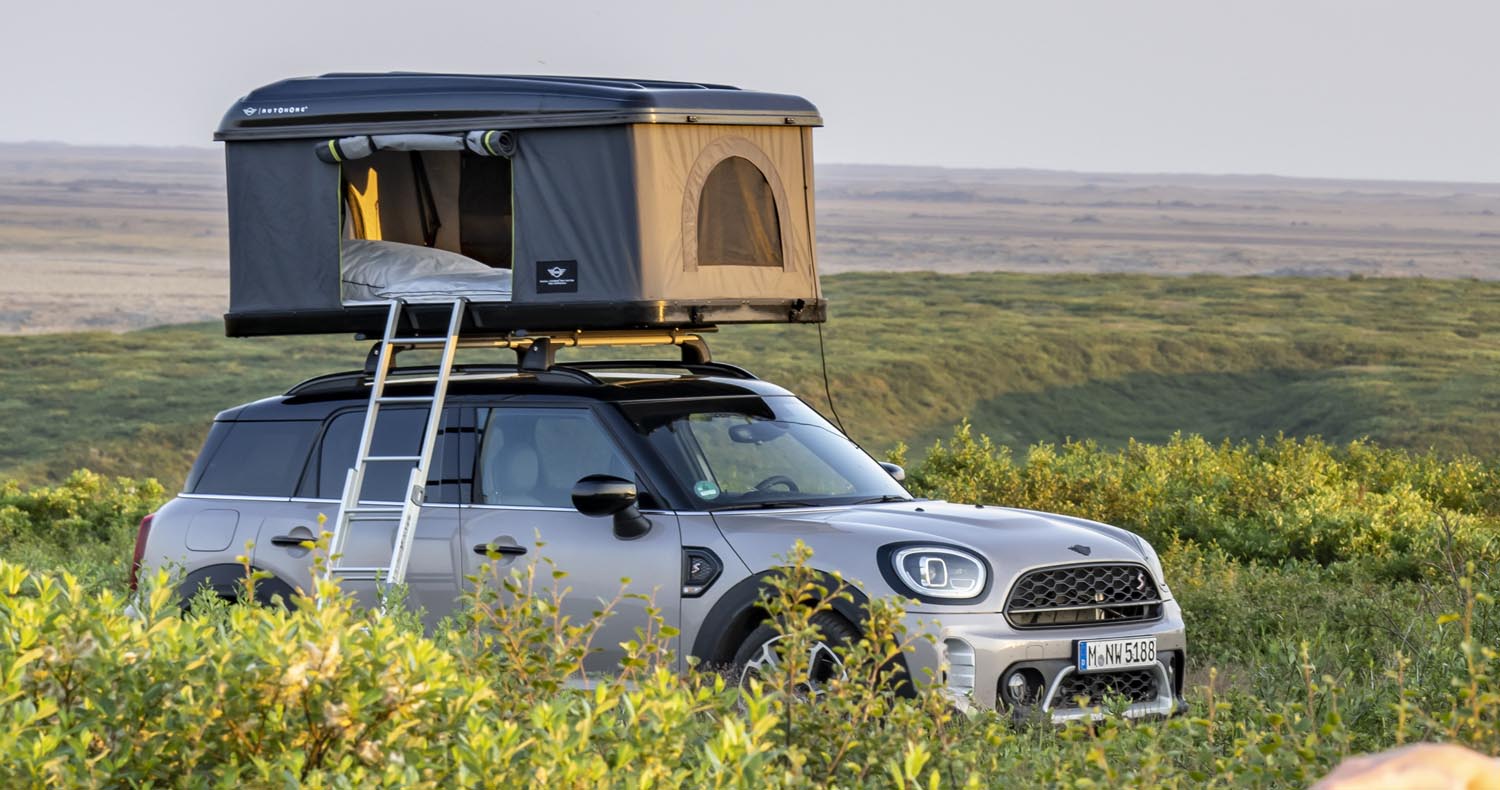 Anyone who wanted to know where elves, fairies, gnomes or trolls lived could once ask Erla Stefansdottir. She was Iceland’s elf commissioner and often advised the building authority so that new roads would not cross magical places. In this respect, when travelling by car from the capital Reykjavik along the few paved and unpaved roads to the most westerly places in Europe, one need not fear waking sleeping supernatural beings. Especially not in the MINI Cooper S Countryman ALL4 (fuel consumption combined: 6.5 – 6.2/100 km according to EU, CO2 149 – 142 g/km).
If you want to experience Iceland, you can’t avoid using part of the Ring Road 1 from the capital Reykjavik. Even here, the MINI Cooper S Countryman ALL4 with its smooth-running two-litre four-cylinder engine shows just how good it is to travel with 131 kW/178 hp. The MINI Cooper S Countryman ALL4 – supported by the eightspeed Steptronic gearbox – accelerates from 0 to 100 km/h in 7.3 seconds. However, it cannot live up to its possible top speed of 222 km/h because more than 90 km/h is not permitted anywhere. On gravel roads – and there are many of them, as in Iceland only about 4300 kilometres of road are asphalted – the maximum speed is 80 km/h, and even that can be too fast.
Heading west, the “1” first takes island explorers to Bogarnes, the economic centre of West Iceland with a fabulous panoramic view. The town’s hot water comes from Iceland’s largest hot water spring, Deildartunguhver, with 180 litres per second. From here, it is worth taking a detour along highway 54 to the 167-square-kilometre Snaefellsjökull National Park, dominated by a 1446-metre-high volcanic cone. Thousands of seabirds populate the Londrangar rock towers. Also worth seeing is Dritvik Bay with the ruins of the only fishing station and the black lava gravel beach of Djupalonssandur.
Even though many paths along the coasts can only be explored by feet, the ALL4 all-wheel drive system provides Icelanders with the best traction wherever cars are allowed to drive. After all, loose ground and water crossings are commonplace on almost every tour in Iceland.The system is based on an electromechanically operating centre differential that distributes the drive power continuously between the front and rear axles – depending on requirements. Up to 100 percent can be directed to the rear; the normal driving condition ensures a 50:50 distribution. The 16.5 centimetres of ground clearance of the MINI Cooper S Countryman ALL4 has a calming effect on Iceland, because even asphalt roads surprise with deep potholes due to frost, among other things, which the MINI Cooper S Countryman ALL4 can easily cope – thanks to plenty of space under the floor and a sophisticated chassis
Continue to the small fishing town of Stykkisholmur, once a trading centre of the German Hanseatic League, now proud of its striking modern church and many old homes. Turn left from the 54 onto the 60 heading north, leading travellers to the particularly wild and pristine Westfjords landscape, where the land masses between the fjords look like fingers stretching towards Greenland. The 60 and 62 lead to the westernmost point of Europe, Bjargtangar lighthouse, on the 14-kilometre-long Lätrabjarg cliff. Among other things, thousands of puffins live on rocks with a maximum of 440 metres – a real change from the sight of the many sheep and Icelandic horses that otherwise populate the island.
Maybe this is the right place to spend the night – why not in a roof tent carried along by the Italian manufacturer Autohome? The black box weighs 58 kilos and measures 210 by 130 centimetres. With the carrier, the MINI is just 2.05 metres high. Setting up the tent is easy: unlock the box at the front and back, gas pressure springs open the flap. The tent is boarded via an aluminium folding ladder. Mesh pockets hold the little things people need every night, and an LED light provides a clear view. The next morning, the box is closed again with straps, and that’s it.
Freshly fortified, we continue to our next destination, Bildudalur – and because we are in the land of elves and trolls, you must visit the creepy Skrimslasetrid Museum for Sea Monsters and Monsters in Strandgata 7 to enjoy interactive and multimedia entertainment. Things get louder further north at Dynjandi, where you’ll find the “Thundering”, “Roaring” or “Raging”: Iceland’s probably most beautiful waterfall is around 100 metres high and shines with six steps. The protected natural monument is 30 metres wide at the top and 60 metres wide at the bottom and extremely impressive.
Almost like the MINI Cooper S Countryman ALL4, which at an overall length of 4.3 metres and a wheelbase of 2.67 metres, it offers plenty of space for five people. A few more live in Isafjördur further north – with 2700 inhabitants, the town marks the Westfjord metropolis with captain’s houses, fishermen’s monument and an archway made of whalebone. This is the right place for souvenir shopping, which can be safely stored in the boot with a minimum capacity of 450 litres. If only two people are travelling, the souvenirs can be much larger – in this case the MINI Cooper S Countryman ALL4 can hold up to 1390 litres. Enough space to take a little salt with you: In Reykjanes, it’s worth visiting the “Salzverk” – salt is extracted from the earth in a climatefriendly way with the help of 100-degree hot water. 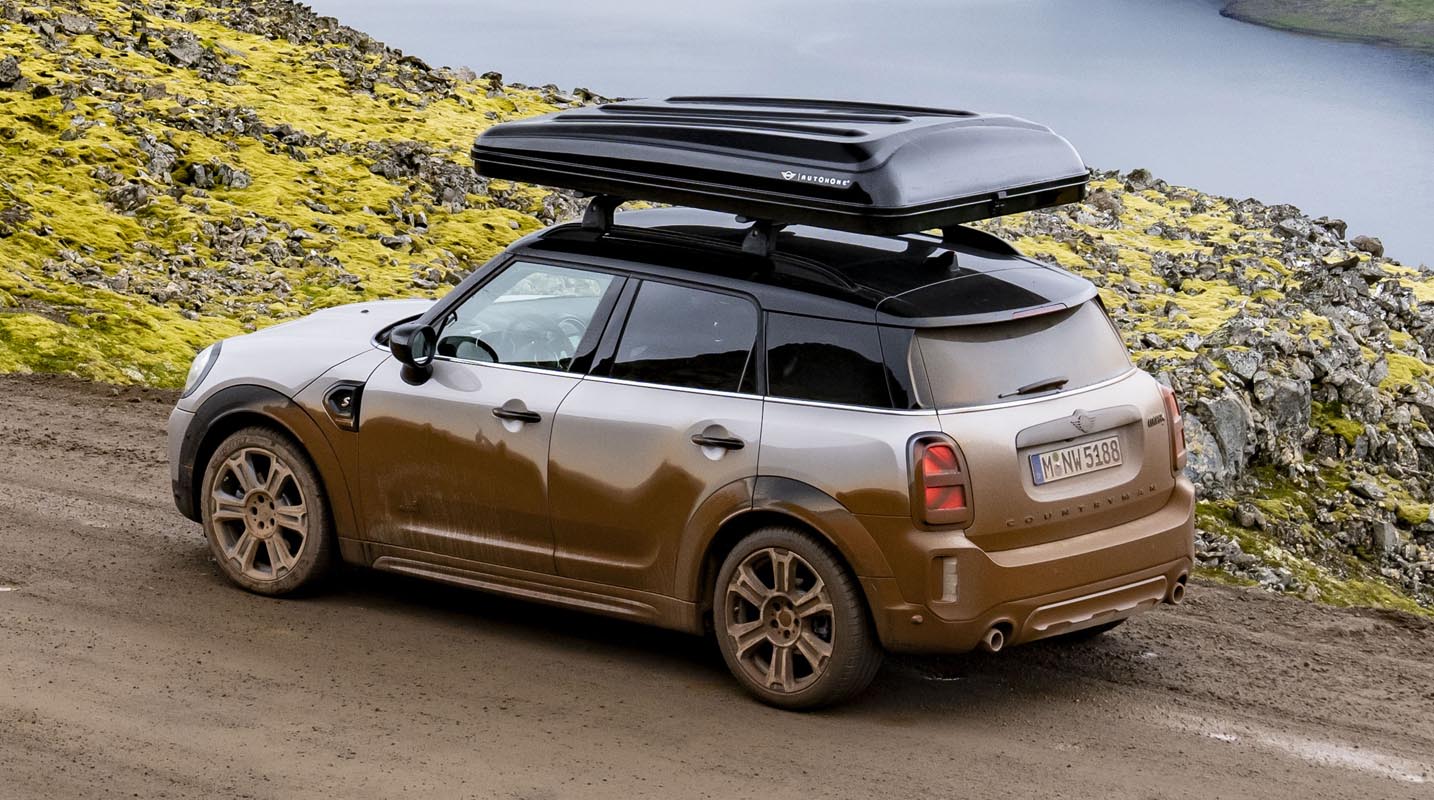 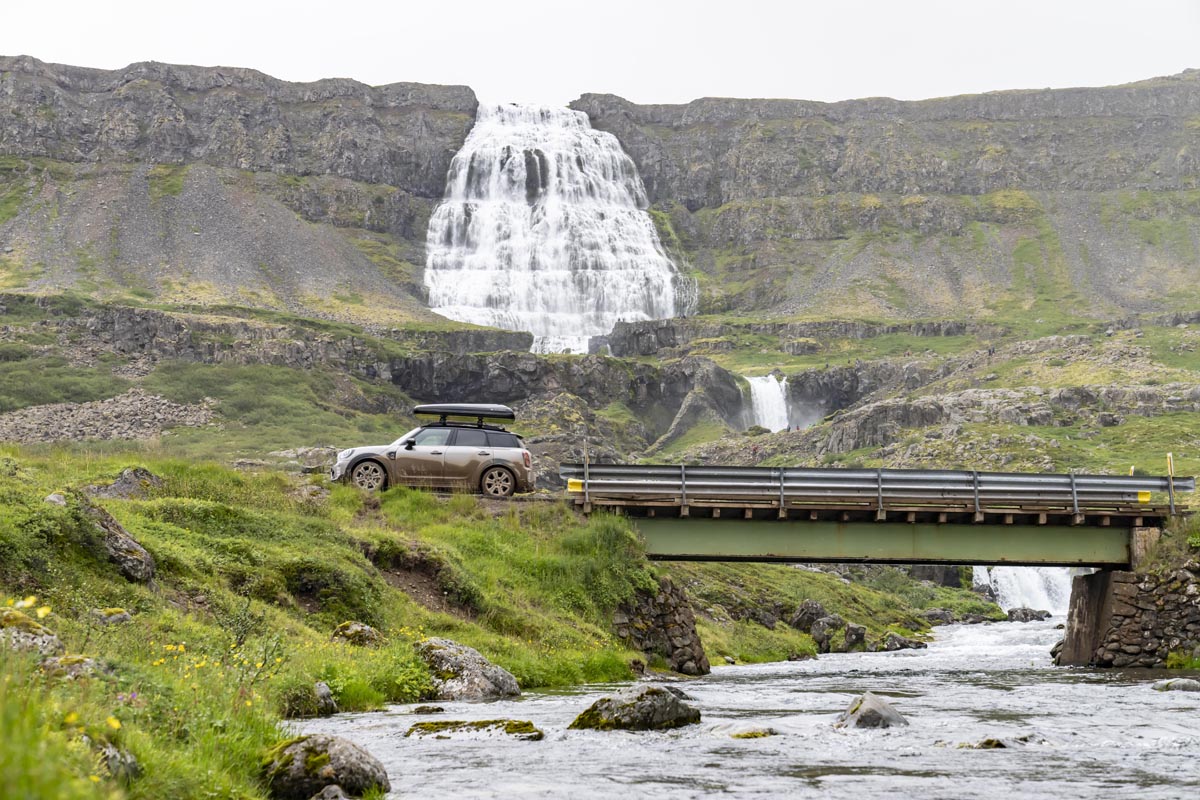 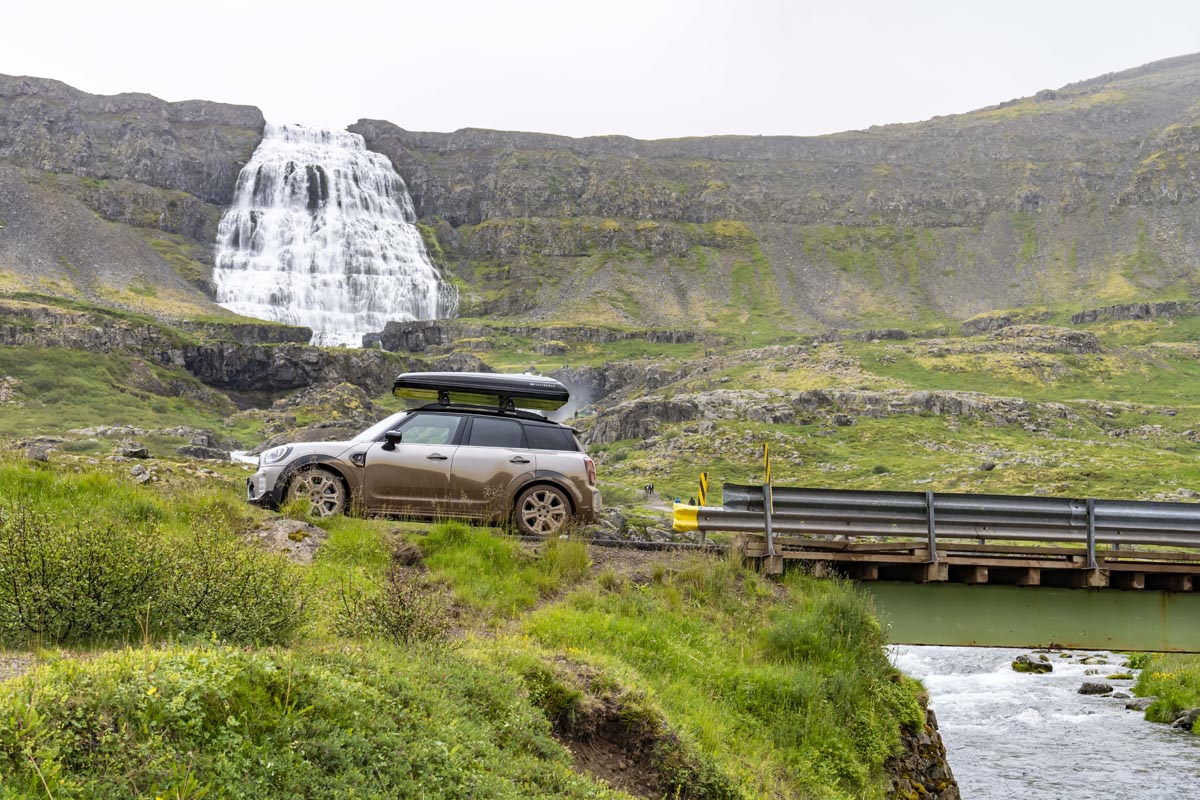 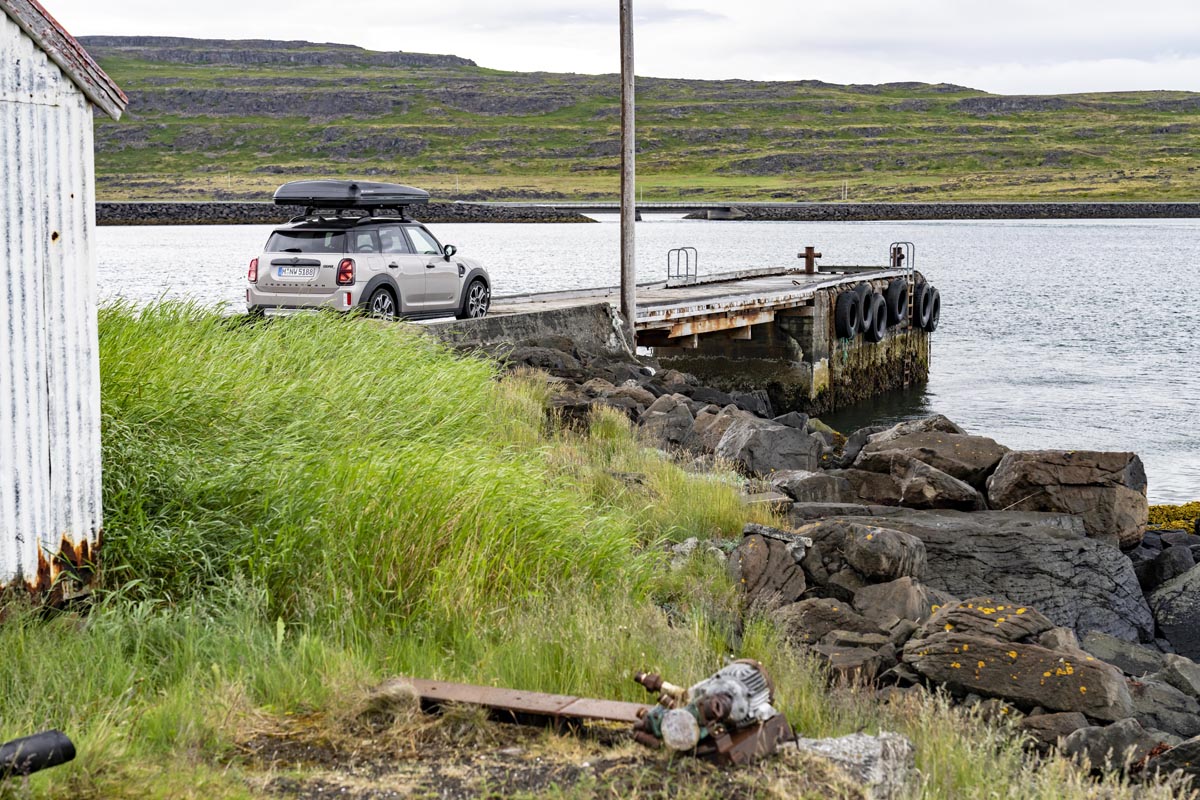 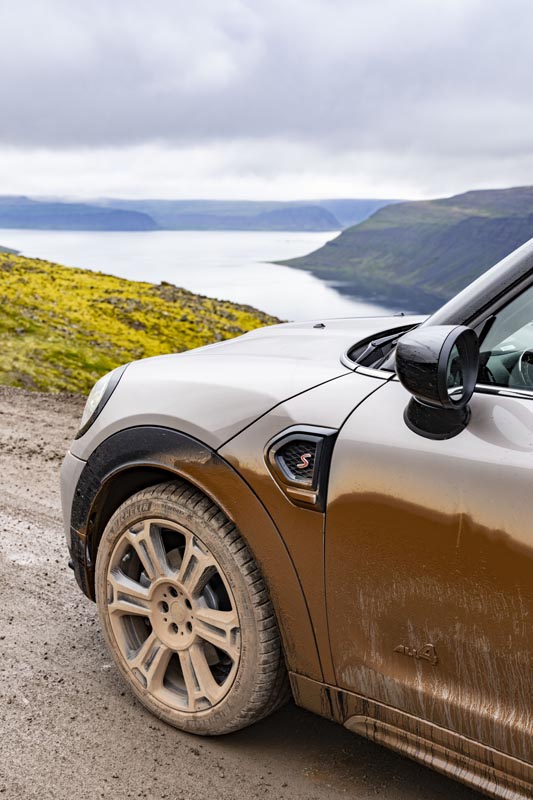 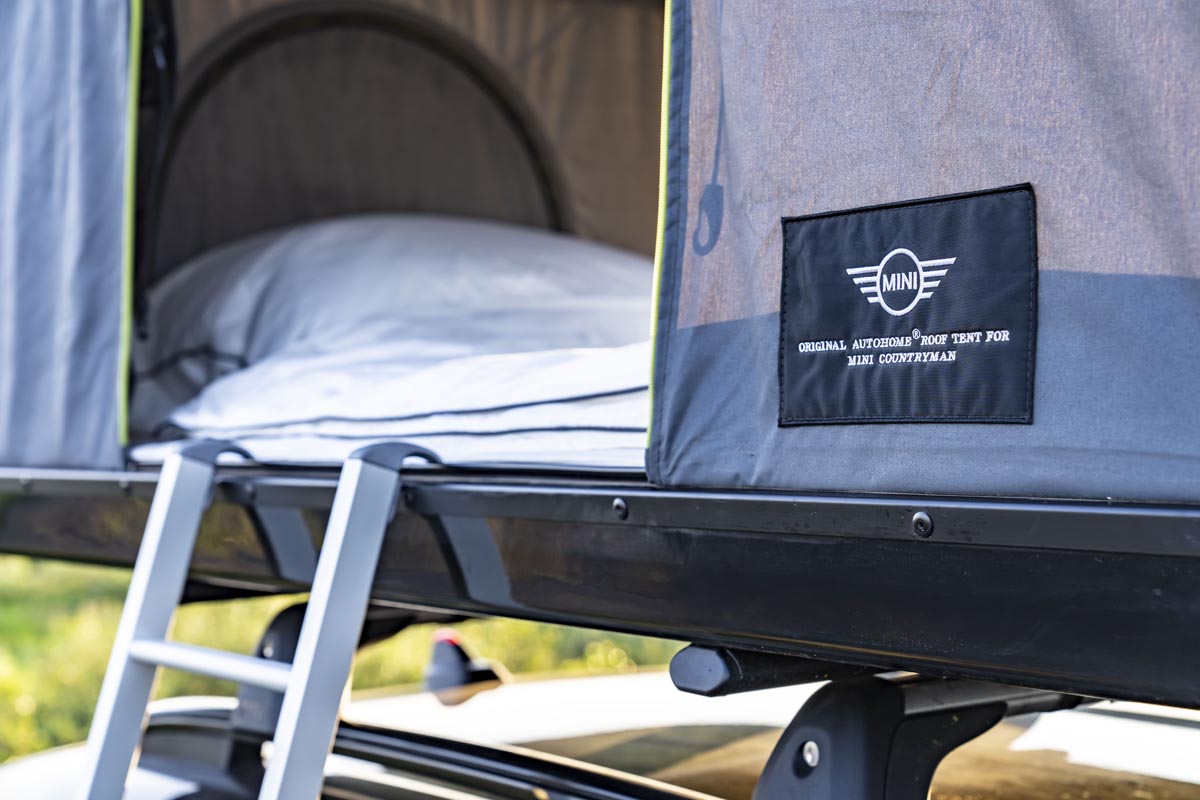 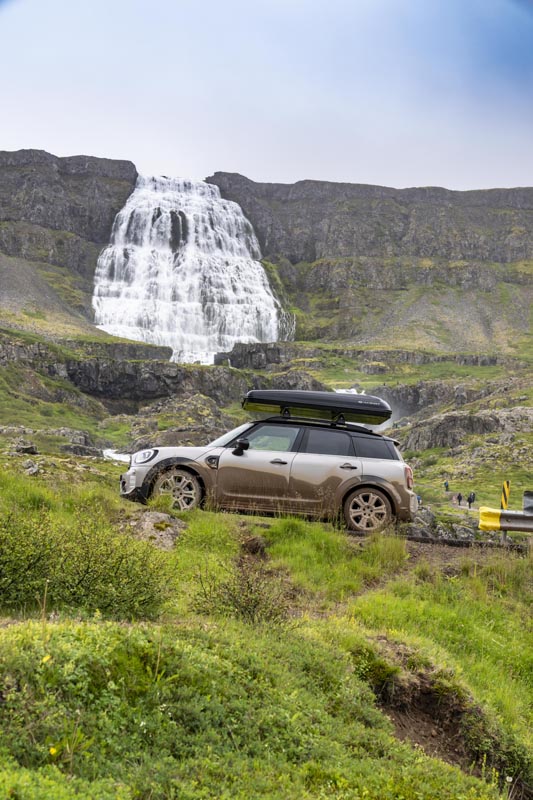 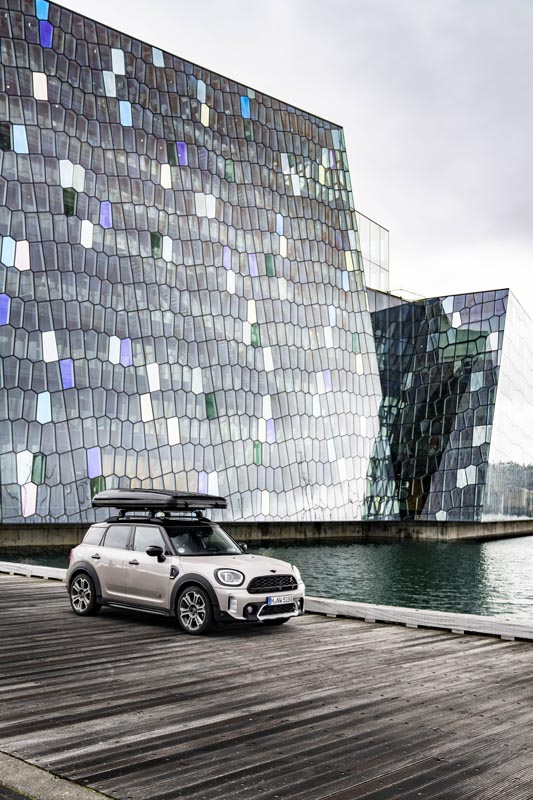 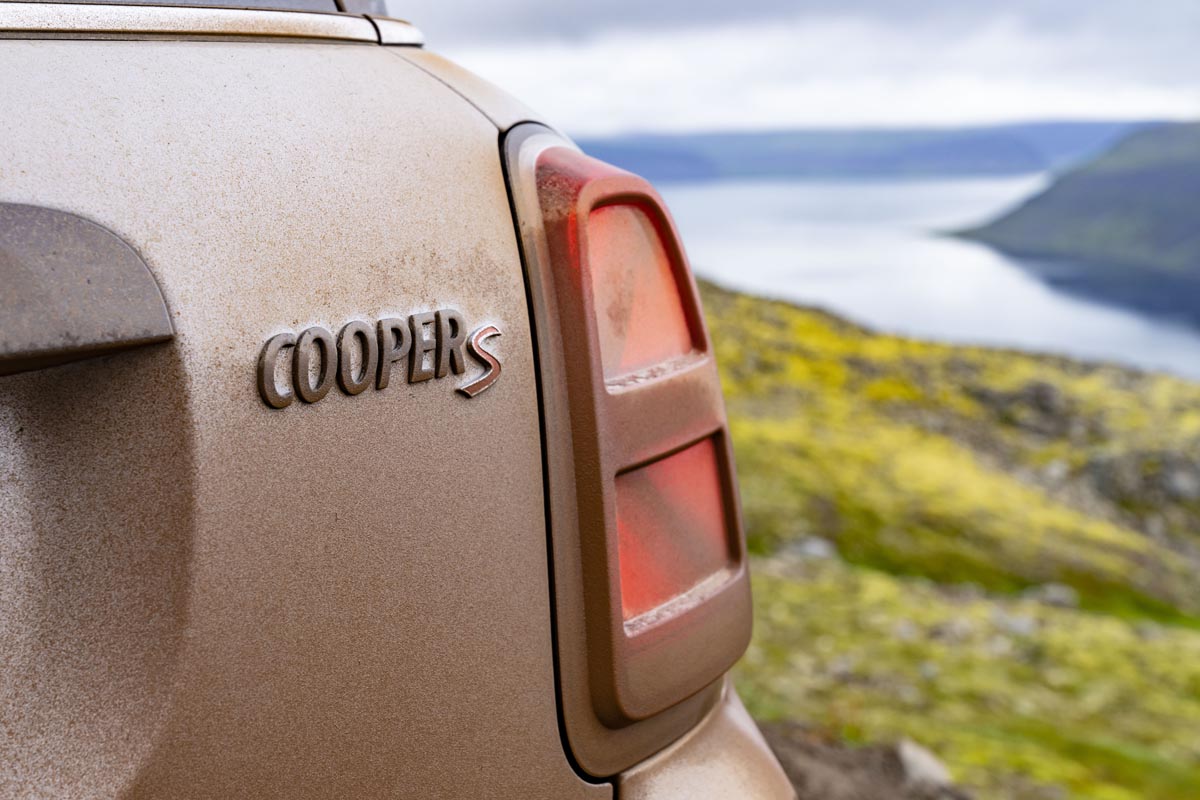 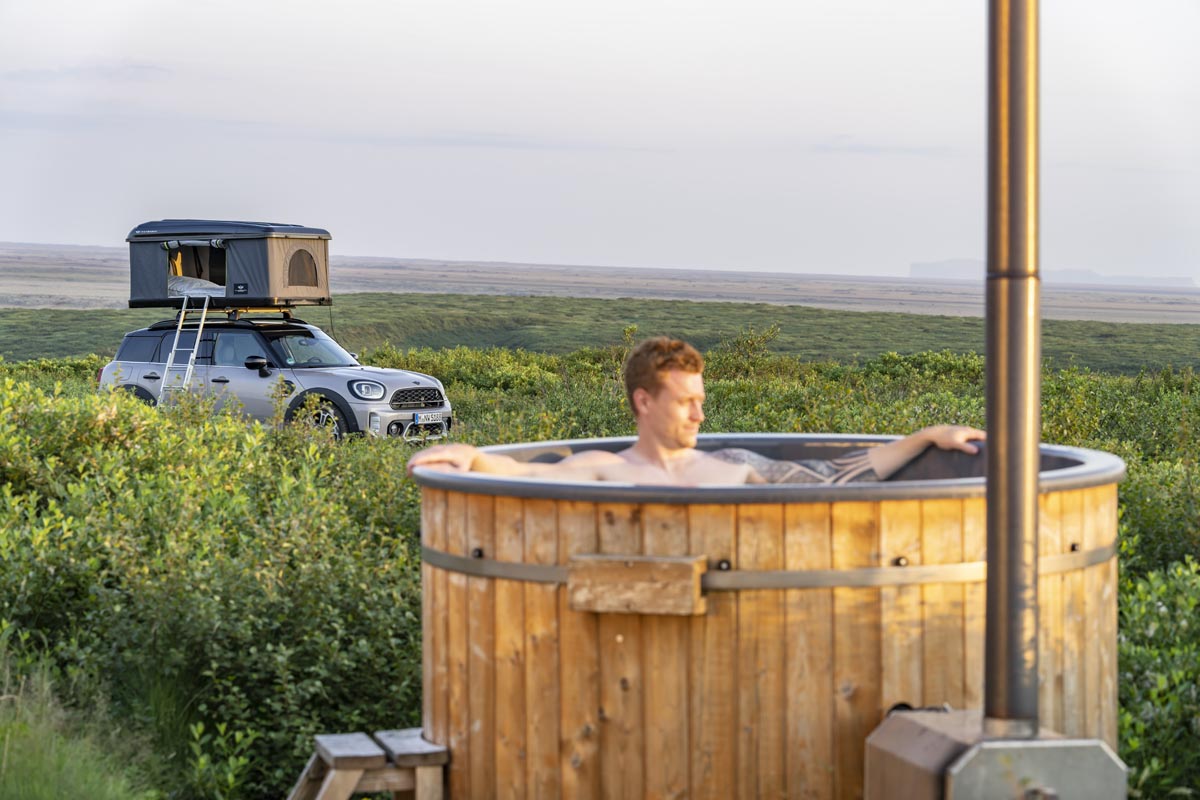 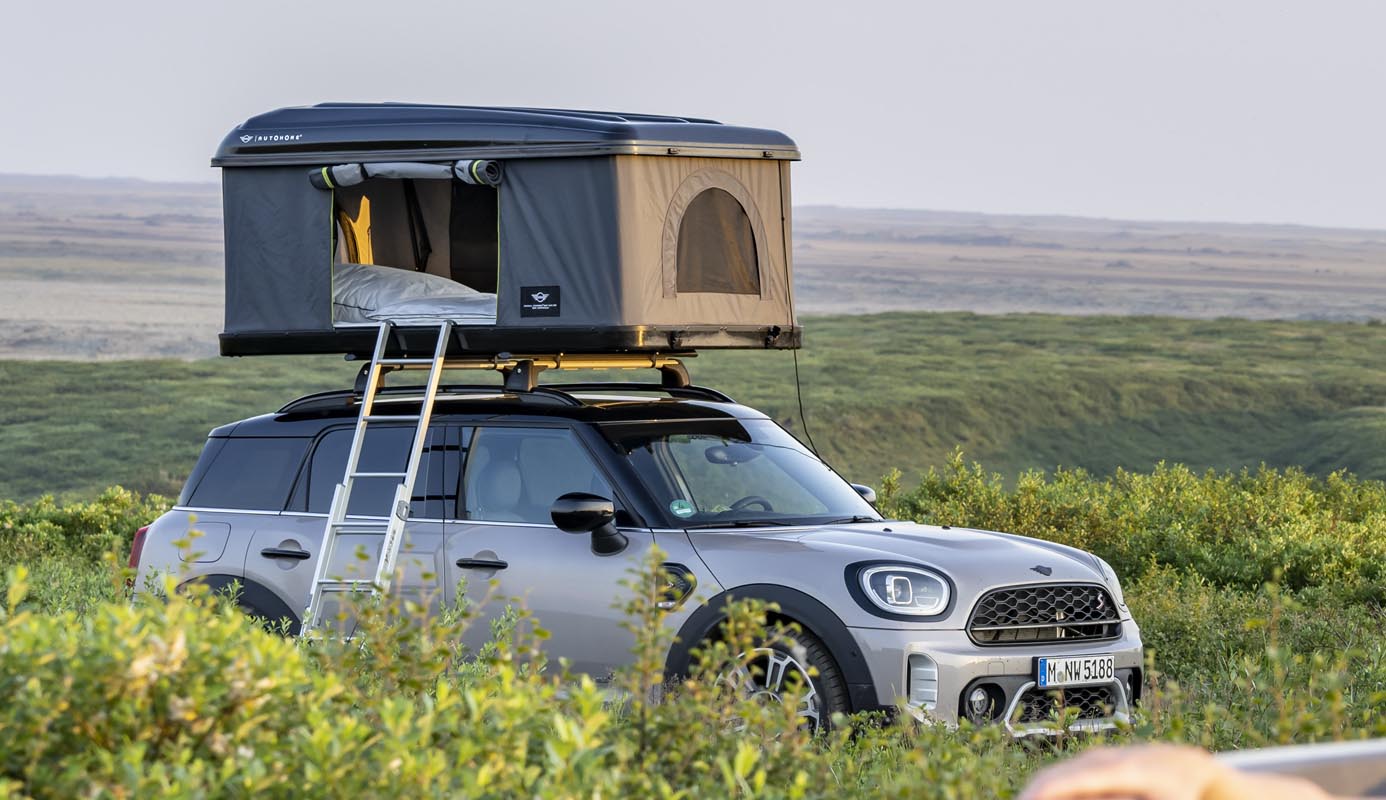 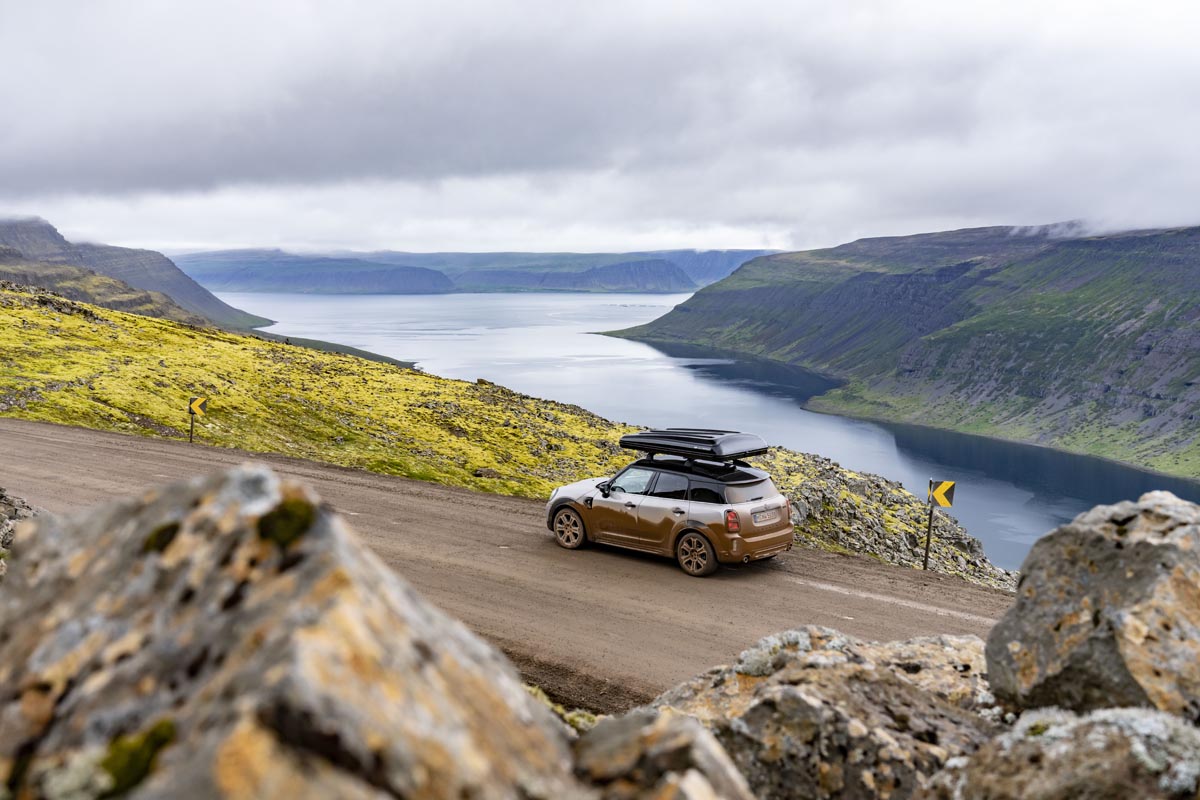 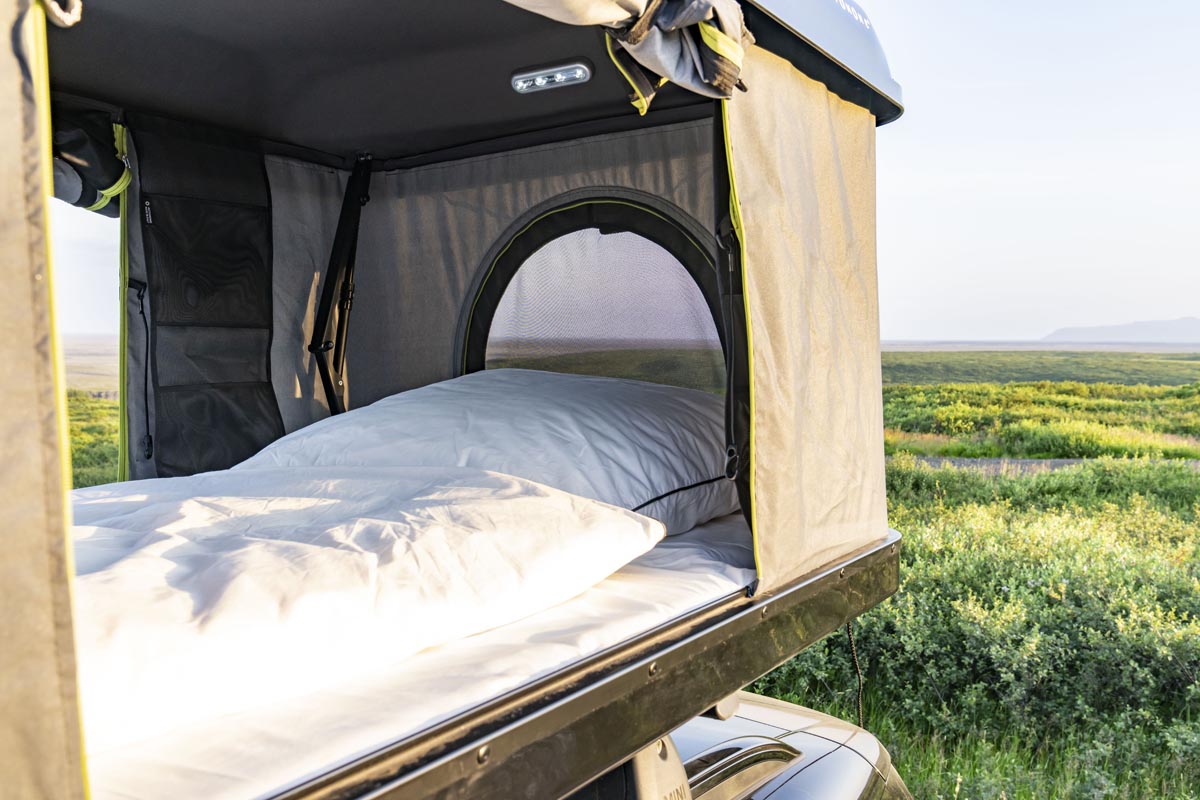 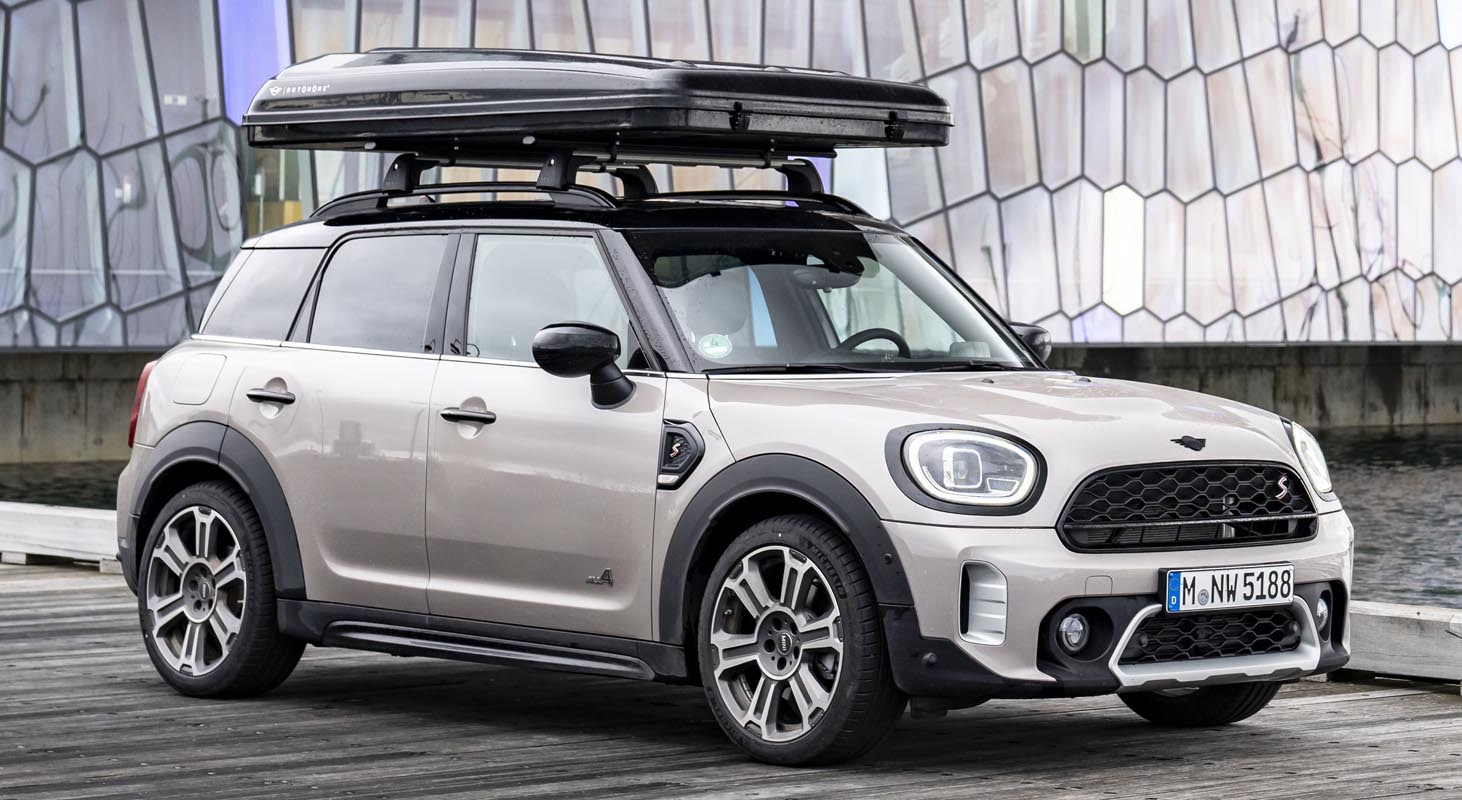 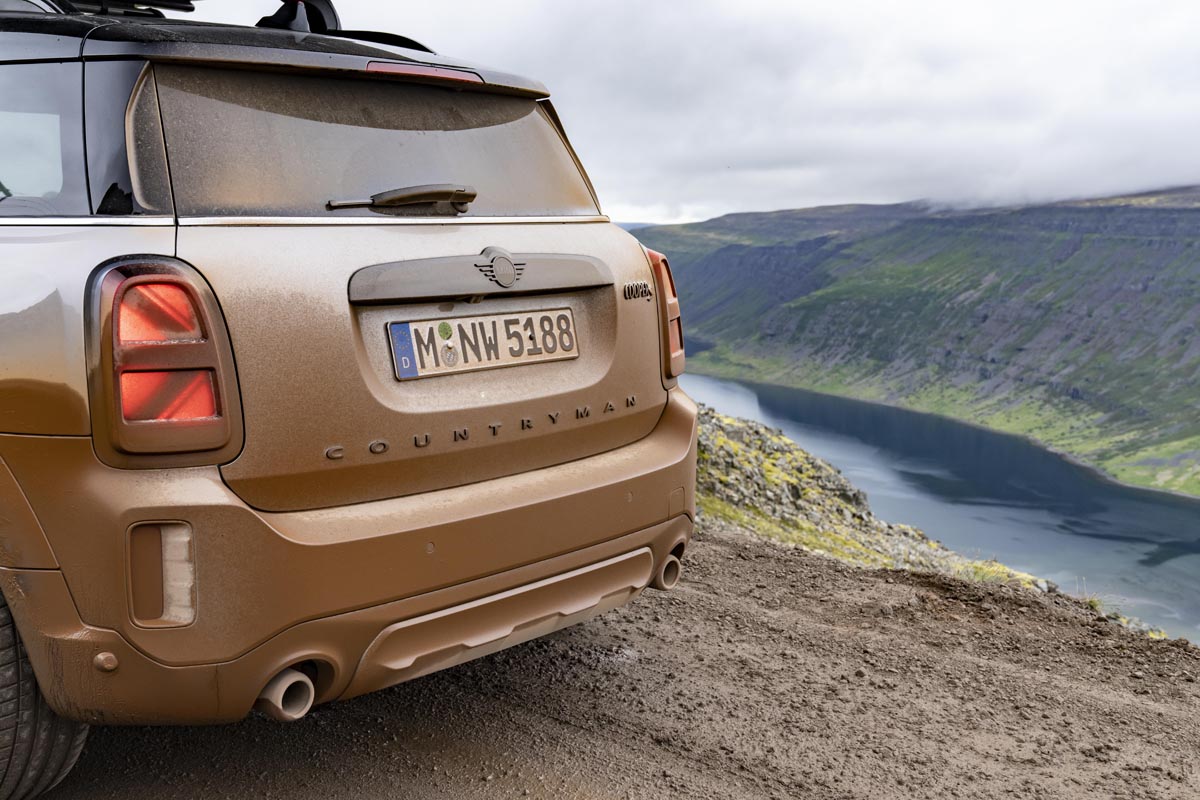 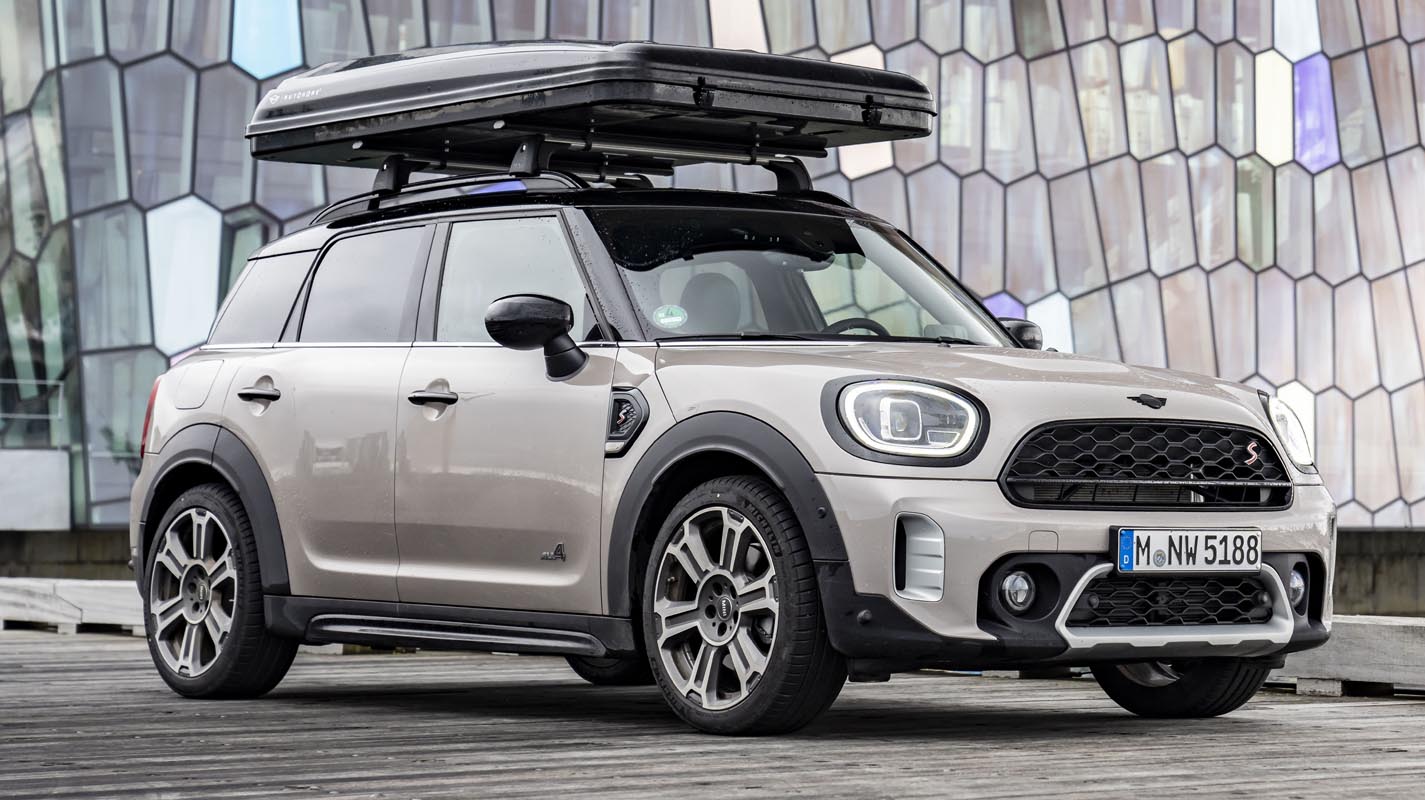 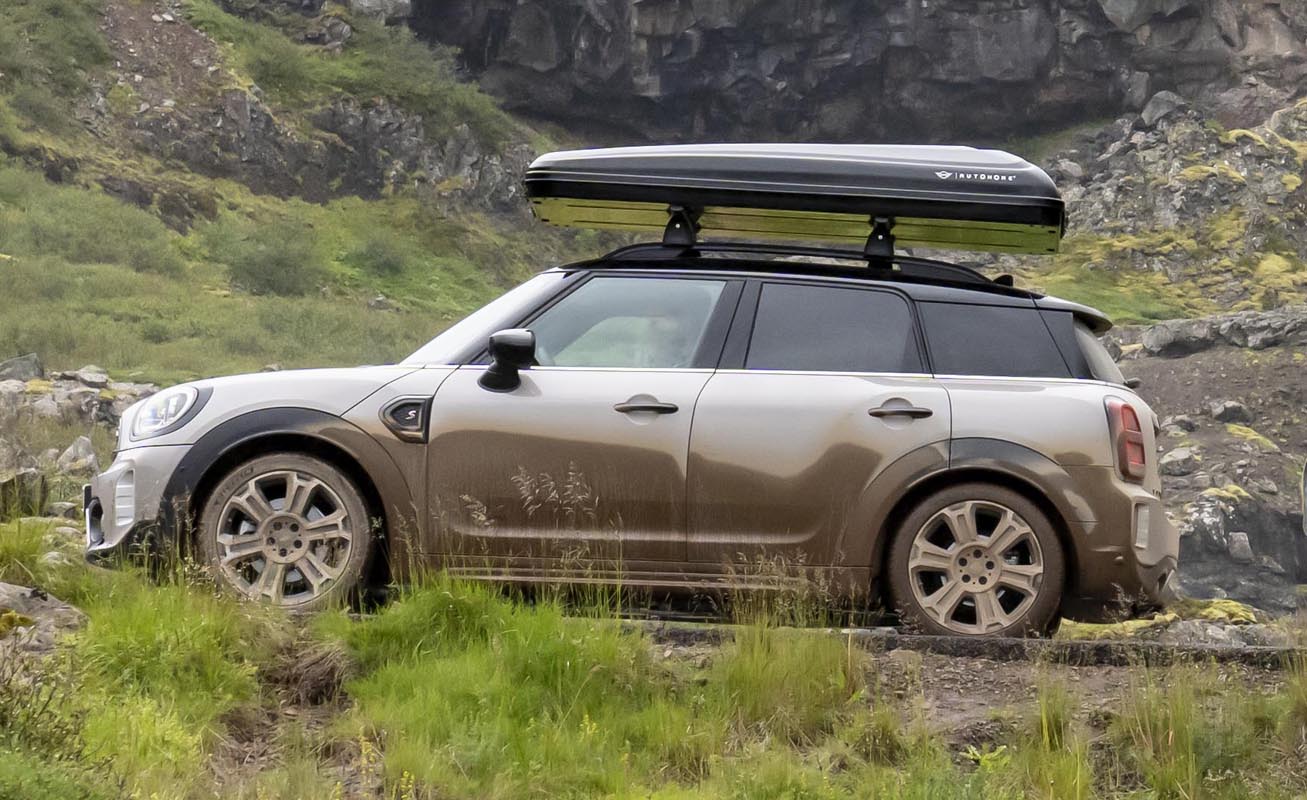 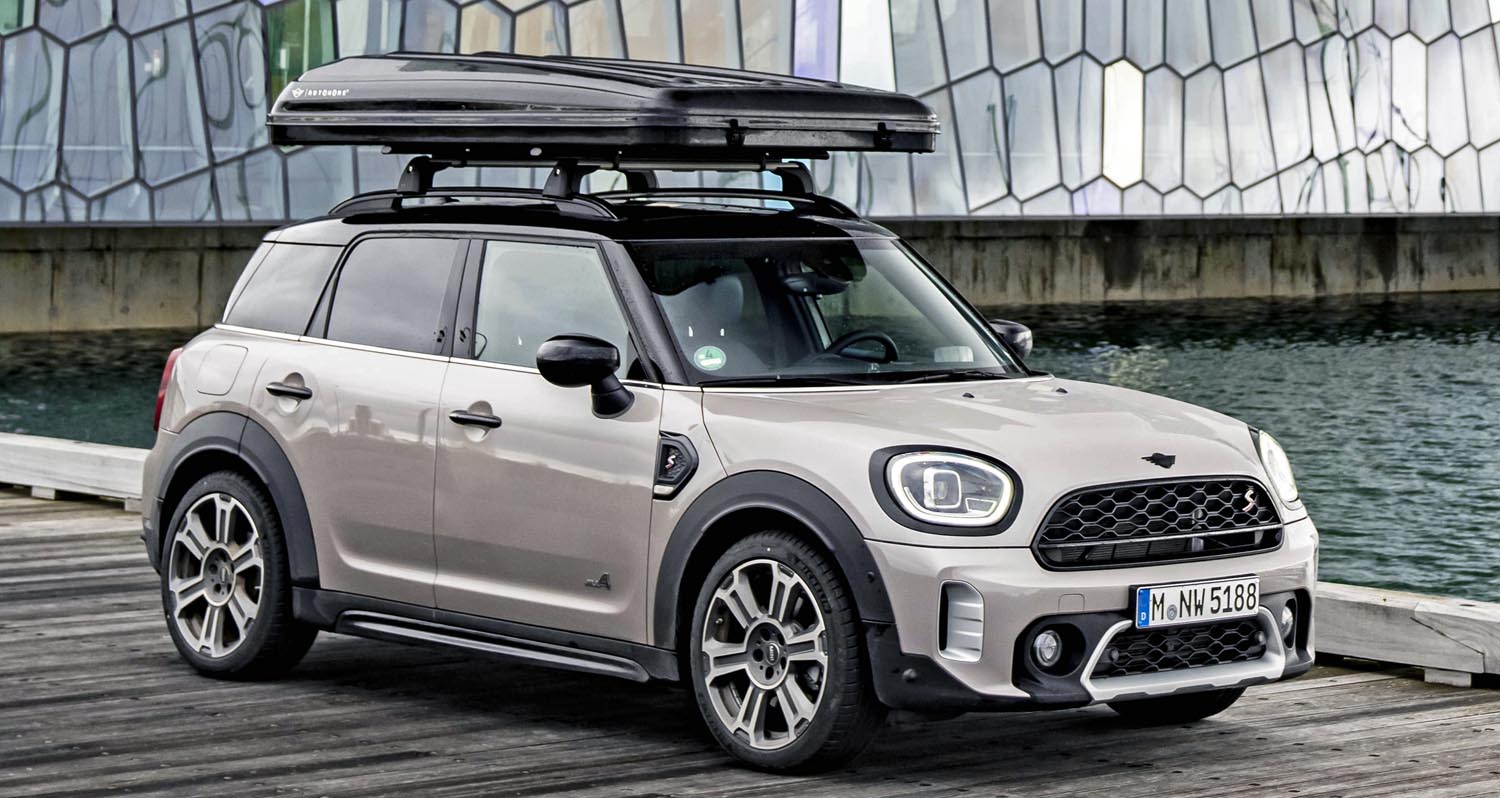 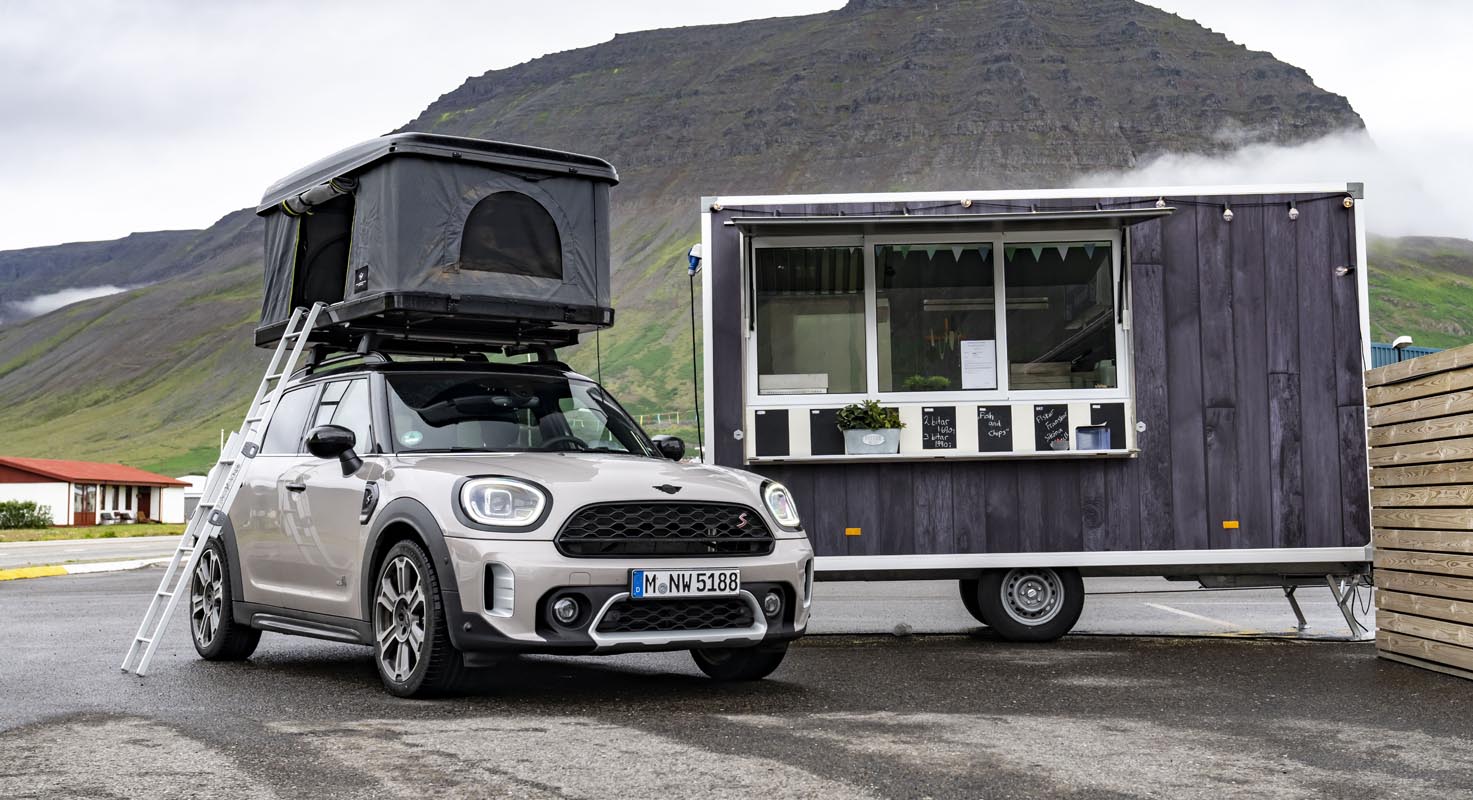 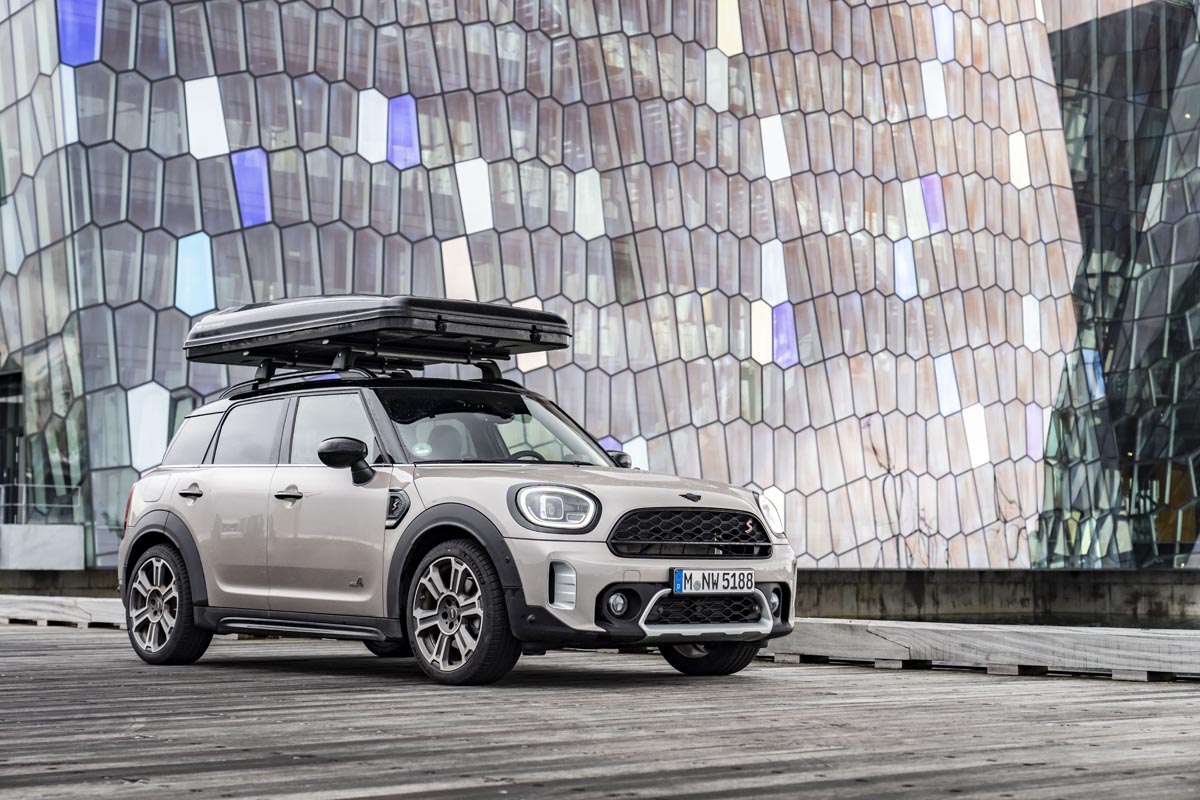 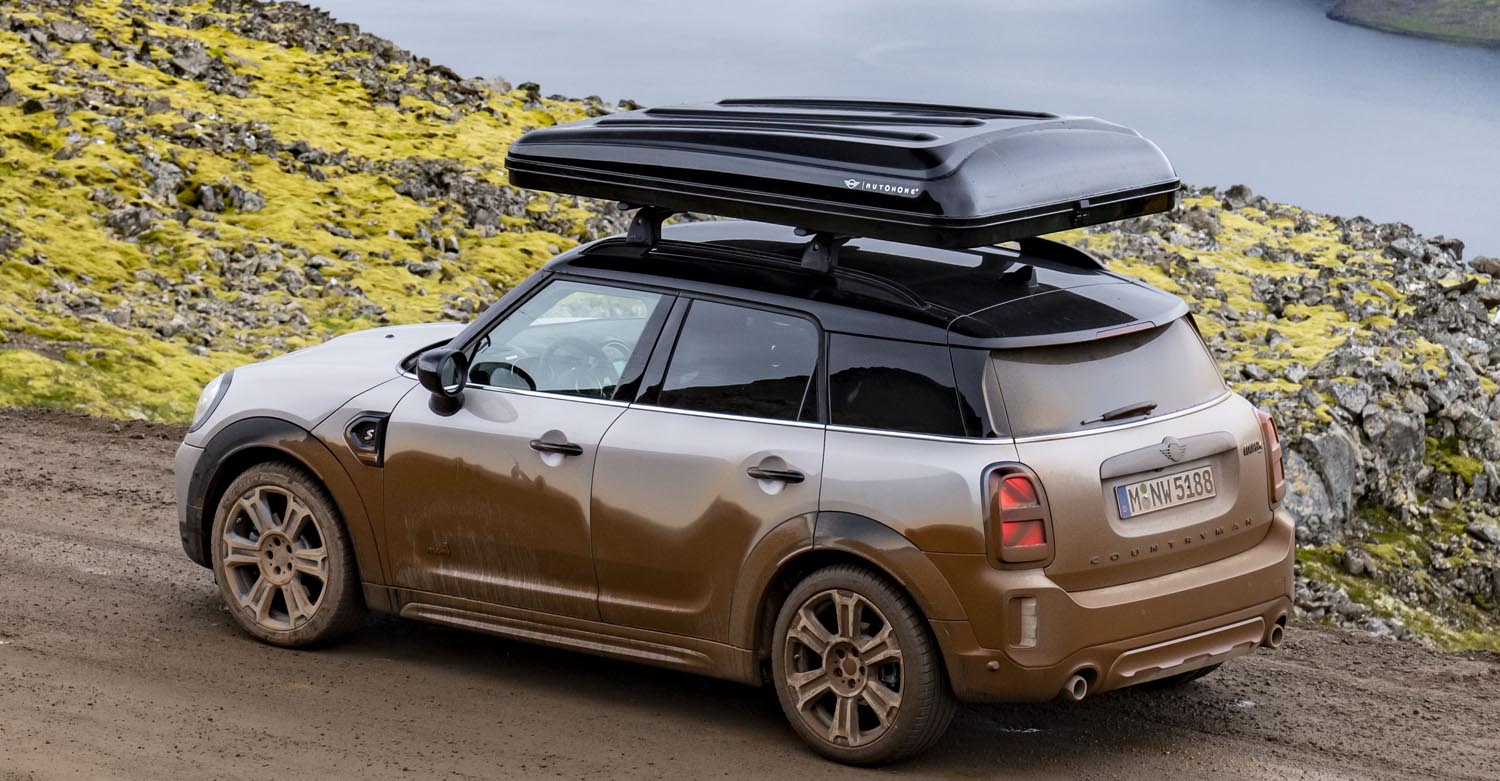 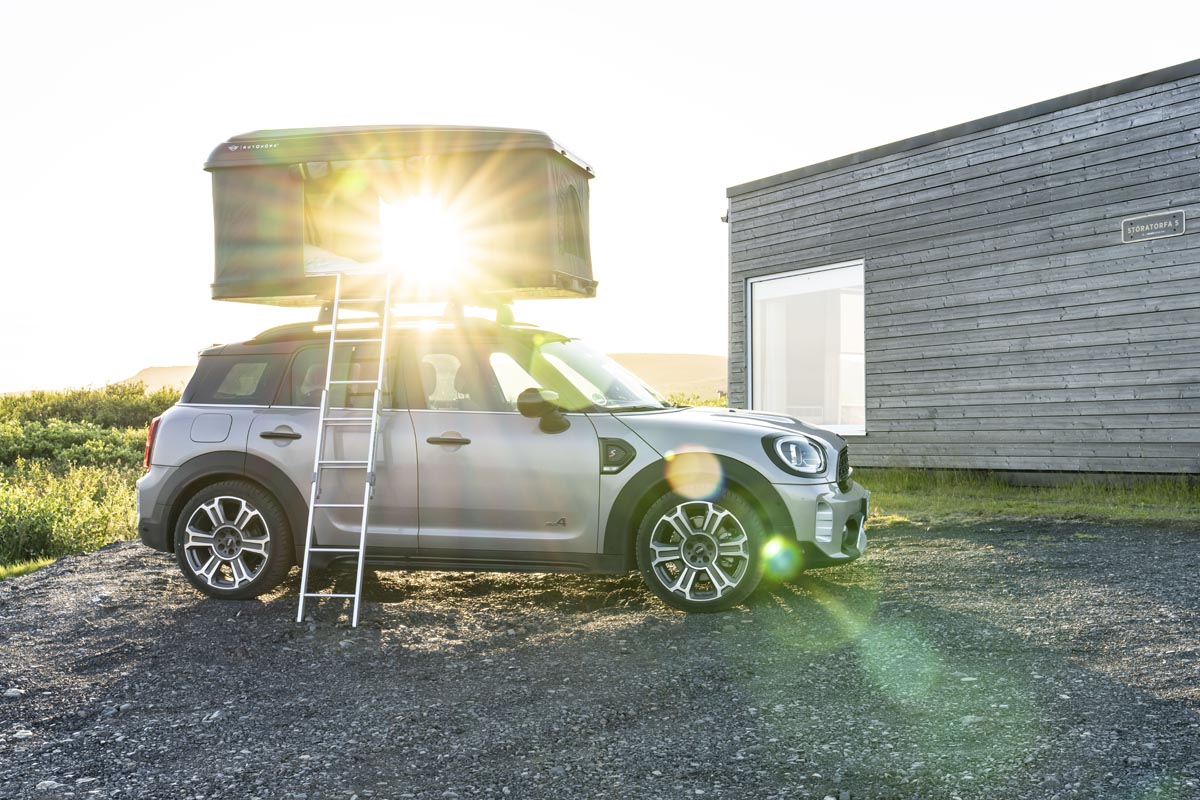 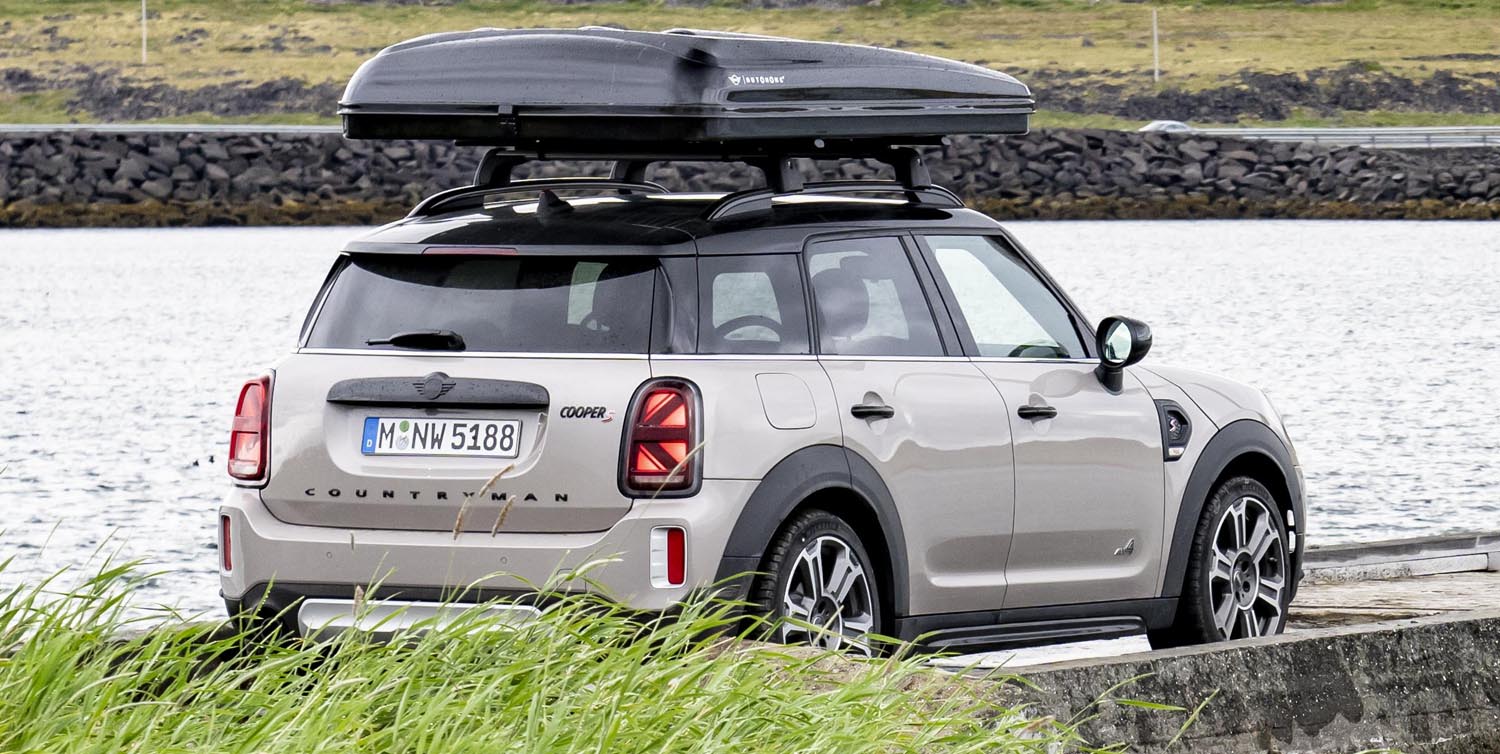 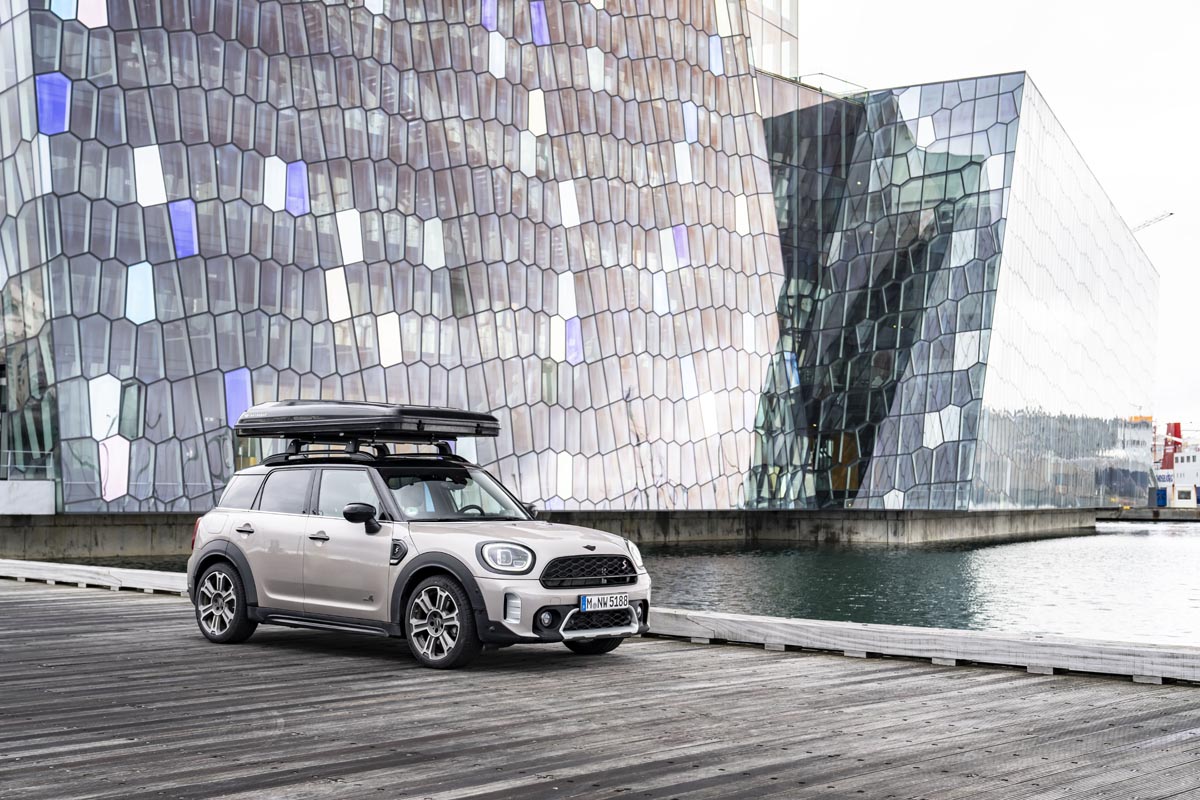 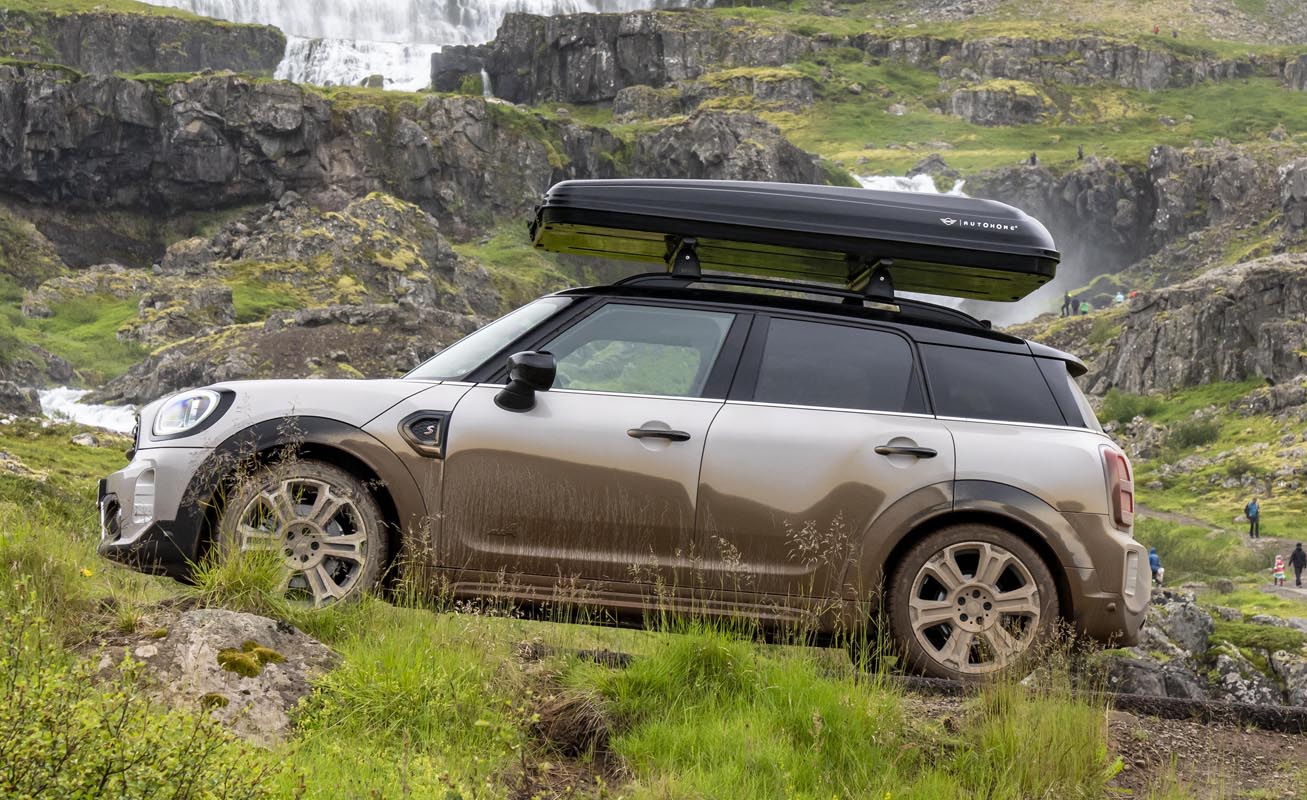 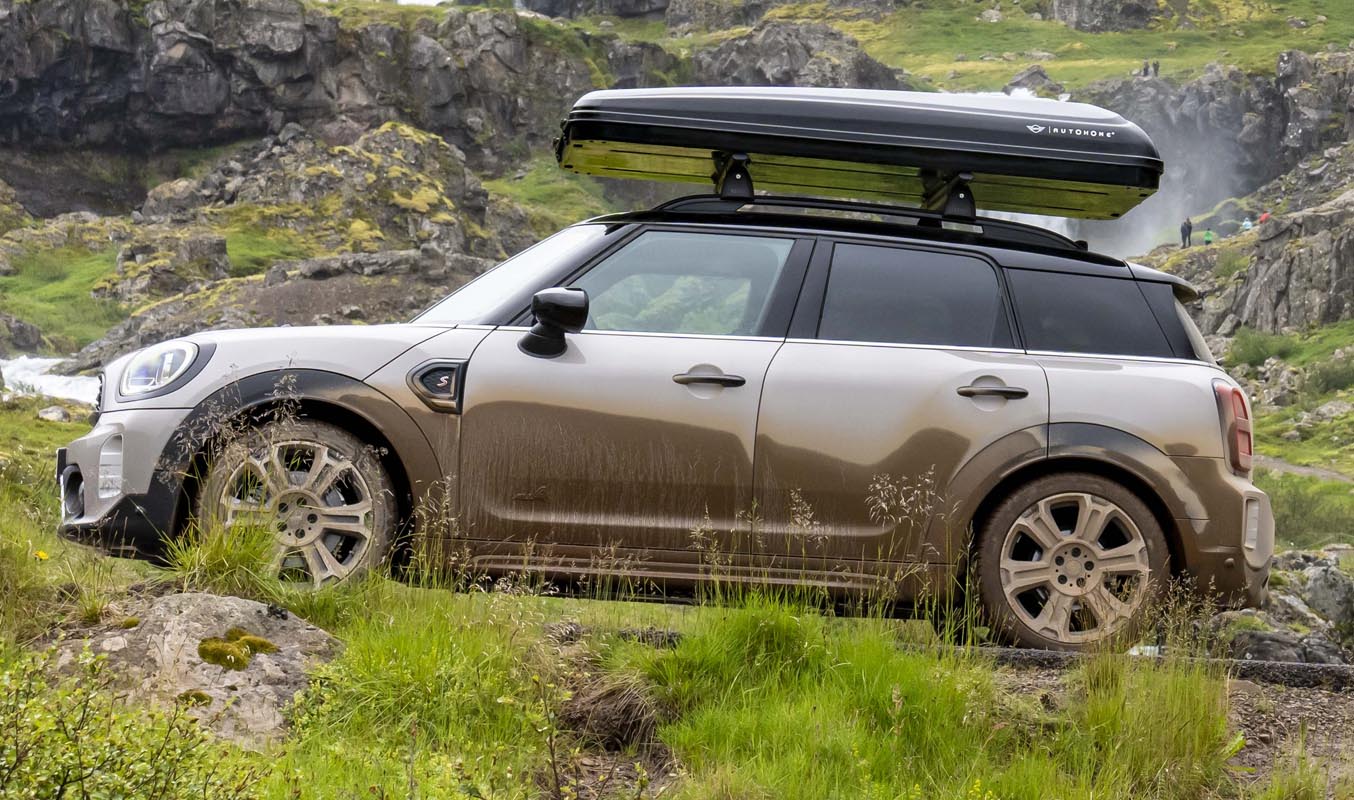