Mercedes-Benz – The Evolution Of The Radiator Grille 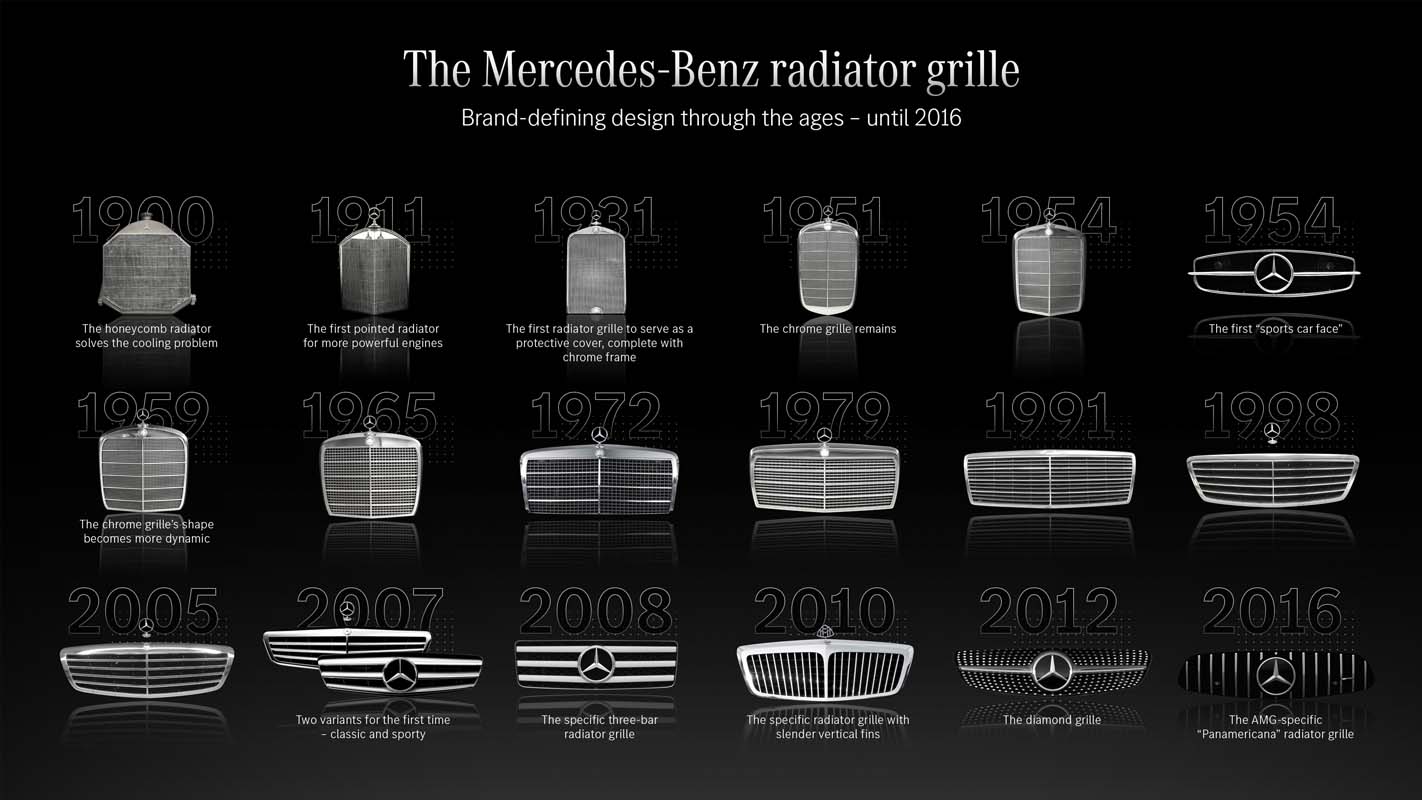 1900 was a breakthrough year in the early days of the automobile. It marked the first time Wilhelm Maybach fitted his invention, the honeycomb radiator, to the Mercedes 35 PS. The patented design solved the problem of cooling the internal combustion engine once and for all, and enabled the production of vehicles that were not only more powerful but also more reliable. Because the radiator stood front and centre on the vehicle, it had an immediate impact on brand image. A new era had begun. Competitors rushed to imitate – a front end with an upright radiator was standard practice around the world until well into the 1930s. Now, more than 120 years later, here we are again. The battery-electric Mercedes-EQ vehicles are bringing a new, distinctive face to the brand with the three-pointed star – with their Black Panel grille melding seamlessly with the headlamps while doubling up as technology hub.

“The far-reaching technological transition to electric mobility and autonomous driving presents us with entirely new opportunities in exterior design. The classic radiator grille loses its original function and transforms into an avant-garde design artefact and technology hub. The Black Panel grille on our EQ models sets a milestone in this respect and shows how Mercedes-Benz is carrying the design of its radiator grille into the all-electric future,” says Robert Lesnick, Head of Exterior Design for Mercedes-Benz AG.

The pipes that got the automobile on course for success

Cooling the engine was one of the biggest challenges in the early days of the automobile. There was a need for an efficient cooling system able to run on a closed circuit. One of the first solutions was the tubular radiator invented by Maybach in 1897. It consisted of a narrow water tank with open-ended pipes running front to rear, through which the air flowed as the car travelled. A fan driven by the crankshaft meant the cooling system would continue to run even when the engine was idling. It was the tubular radiator which facilitated more powerful engines.

The big breakthrough came in 1900 with the honeycomb radiator in the Mercedes 35 PS. It consisted of more than 8,000 small pipes with a square cross-section of around six millimetres per side. The larger frontal area and higher airflow offered by the square pipes delivered significantly more cooling power. They were soldered together to create a new kind of rectangular radiator with an integrated tank. A fan behind the radiator improved temperature regulation at slower road speeds. The 35 PS engine in the first Mercedes needed only nine litres of water instead of the previous 18 litres. One year and a raft of improvements later, this was down to just seven litres.

The design of the Mercedes 35 PS with its powerful upright radiator grille had a lasting impact on the automotive world. Until halfway through the 1930s, virtually all series-production automobiles had a similar radiator design – with slight variations between flat and pointed. The radiator grille with the distinctive vertical fold in the middle appeared in 1911 and enabled a slightly larger cooling surface. However, because it was more complicated to produce, it was reserved largely for vehicles with powerful engines.

In the first 40 years of automotive history, the radiator had a purely practical function. Carmakers didn’t initially see it as a distinctive hallmark for a brand. Individual design was largely in the creative hands of the coachbuilders, who also liked to experiment with the shape of the radiator – from opulent curves to streamline designs inspired by aviation.

The radiator grille as a protective cover

The big change came along in 1931 with the arrival of the Mercedes-Benz 170 (Typ W 15). For the first time, the radiator was mounted for protection behind a grille. The new component was part of the bonnet and designed with enormous care. The elegant, rounded, rectangular form was based on that of the radiator itself. However, it was also augmented by a wide chrome frame, which conveyed a message of quality and timeless elegance. The Mercedes star appeared not once but twice on the innovative radiator cover – as a badge and also as a dignified ornament. The fine honeycomb pattern had a functional as well as aesthetic role. It protected the radiator itself from dirt and from being hit by stones. Dirty radiator fins were less effective at cooling than clean fins, while impact from stones could cause damage, leading the engine to overheat.

The radiator grille on the 1937 Mercedes-Benz 170 V retained the same fundamental upright, slender form. However, it was angled slightly rearwards and tapered inwards towards the bottom. This sent a far stronger visual message about the dynamic performance of the new limousine. The radiator’s slightly pointed shape subtly enhanced this effect. Attention to detail was also evident in the fine fretwork and chrome-plated cross‑braces, which visually divided the surface into precise sections.

The chrome grille – cautious development in the name of aerodynamics

The chrome grille subsequently became one of the brand’s most recognisable features. Mercedes-Benz designers tread carefully with only very gradual adaptations to its overall shape until into the 1960s. Then the Mercedes-Benz grille grew in width and shrunk in . The focus on width conveyed more power and presence. However, it was also a function of the trend towards lowering the bonnet to improve aerodynamics and thereby efficiency. This careful development of such a visually distinctive signature as the radiator grille reinforced the recognition of Mercedes-Benz on the road and thus the brand image all over the world. The design of the chrome grille has continued to stretch and evolve to this day.

The “sports car face” makes a name for itself

In the 1950s, Mercedes-Benz created a second, completely standalone radiator design. The legendary 300 SL “Gullwing” and the smaller 190 SL roadster were given a modern alternative known internally as the “sports car face”. A large Mercedes star was mounted in front of the wide, shallow radiator opening and flanked by horizontal chrome fins. This design became the hallmark of the sports cars and roadsters, and proved over the decades that followed to be just as timeless and enduring as the classic Mercedes radiator grille.

The model offensives of the 1990s and 2000s saw the front end of Mercedes cars shift to a sportier look and feel. Entry into new market segments with models such as the A-Class and B-Class, the SUVs, more convertibles, coupés and roadsters called for new design variants. Numerous variants of the sports car face – with or without distinctive horizontal fins – found their way into more model ranges, underscoring the brand’s new and significantly more performance-oriented direction.

There were specific exceptions such as the Formula 1 nose of the second-generation SLK and the SLR McLaren. In 2007, however, came the ground-breaking decision with the C-Class (W 204) to leave the decision up to the customer. Depending on the equipment line, either the classic (Classic and Elegance) or sporty (Avantgarde) grille graced the front end of the car. The concept was expanded to the E-Class and still applies today to both model ranges.

The design of the radiator grille on current Mercedes-Benz models is even more individual and, above all, more sculptural. Different forms, contours and fins make it easier to distinguish between the model ranges without neglecting the distinctive brand character of the Mercedes-Benz grille. They remain unique in terms of their identity and recognition value. A Mercedes is always clearly recognisable as a Mercedes – in every era for more than 120 years.

The same applies to the G-Class, Mercedes-AMG and Mercedes-Maybach brands. The G-Class grille is as iconic and unique as the vehicle itself. It features horizontal fins and a large central star, and is flanked by two round headlamps. With its edgy contours, it reflects the design language of the timeless off-road classic characterised by clear lines and large surfaces, and has been only carefully reworked since 1990.

With its downward-flaring contours and vertical fins, the dedicated AMG grille references the globally successful 300 SL racing car that won the legendary Panamericana road race in Mexico in 1952. In a number of iterations over the years, it has become the most distinctive identifying feature of all new AMG models. The Vision AMG show car indicates what the future of the AMG grille might look like – a grille panel in the same colour as the body but retaining the unmistakable AMG form with vertical fins. Illumination ensures the face remains immediately recognisable even by night.

The recognition value of the of the prestigious Mercedes-Maybach grille lies in the sculptural treatment of the vertical fins – inspired by a pinstripe suit. The MAYBACH wordmark is integrated into the grille’s chrome frame. The latest concept, the EQS Maybach, shows the all-electric interpretation of the grille – seamless, with a smoothly integrated radar plate.

The evolution continues. While battery-electric drive means there is no longer a requirement for a radiator at the front of the vehicle, there remains a need for air intakes. However, designers have the freedom to position them elsewhere, opening up the opportunity to create a completely new and distinctive front-end design that underscores the progressive luxury of the Mercedes-EQ models. In place of the grille is a Black Panel with a central star which fuses seamlessly with the innovative headlamps. The visual breadth across the entire front end reflects the dynamic performance of the all-electric vehicles. The design incorporates finely detailed star patterns that create a subtle, three-dimensional effect. Variations in design detailing give the EQ models their individual character. The Black Panel and the headlamps are also connected by a horizontal band of light. And while the distinctive daytime running lights of the EQS saloon are identified by three light dots, the EQS SUV signature features three triangles.

As well as being visually distinctive, the Black Panel also offers the perfect surface for seamless integration of a variety of sensors that are essential for the conditionally automated driving of the future. These include ultrasound, cameras, radar and Lidar (laser). One camera for the Active Distance Assist DISTRONIC is integrated into the Mercedes star. And behind the Black Panel on the EQE and EQS is the advanced technology for the innovative DRIVE PILOT. 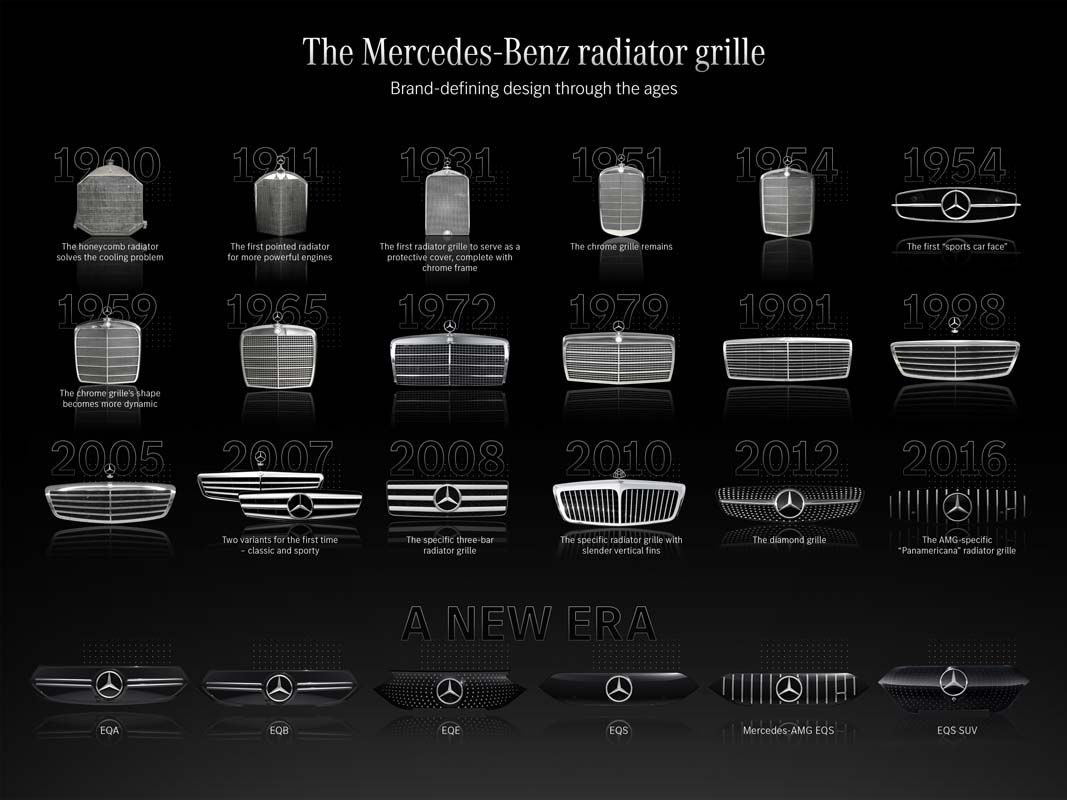 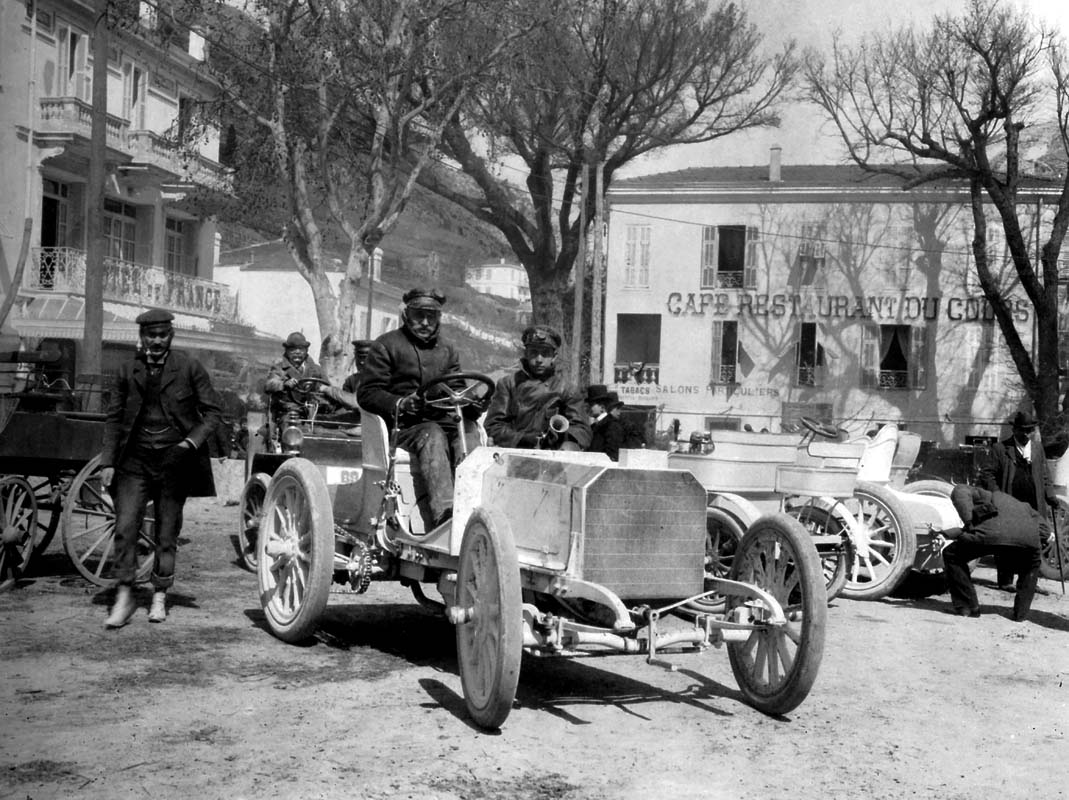 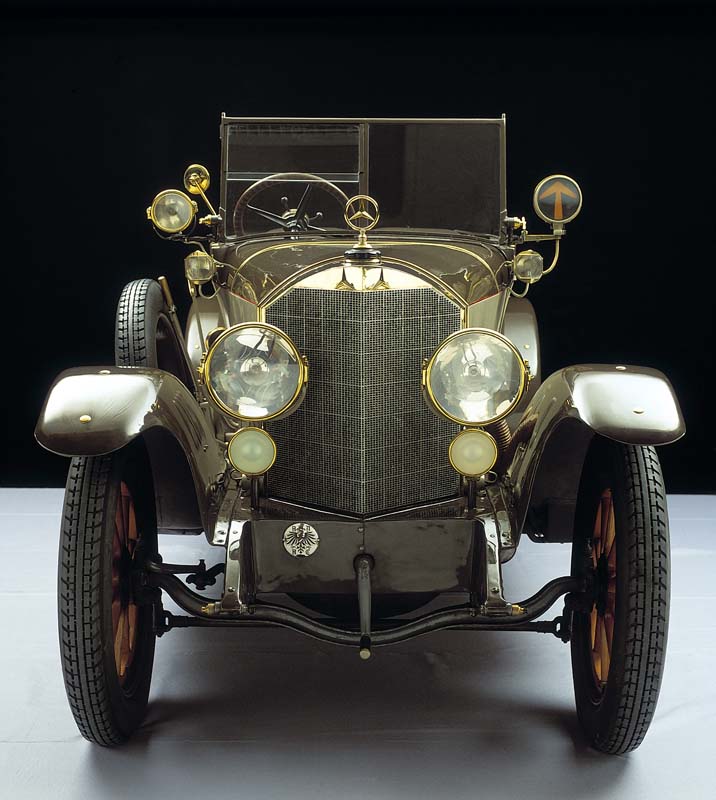 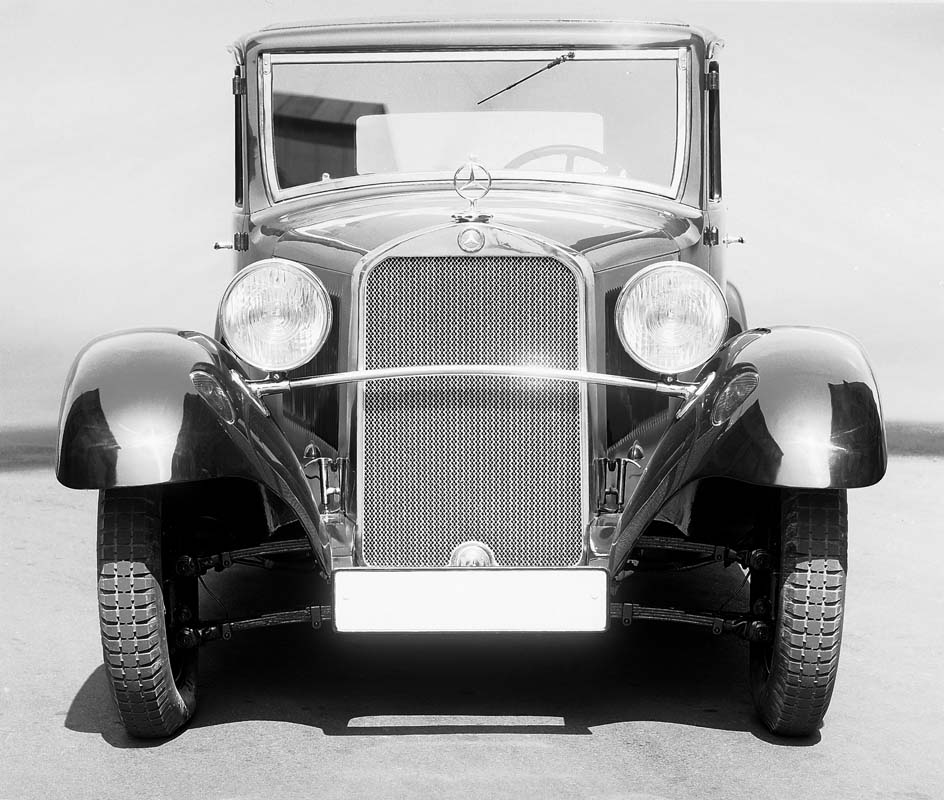 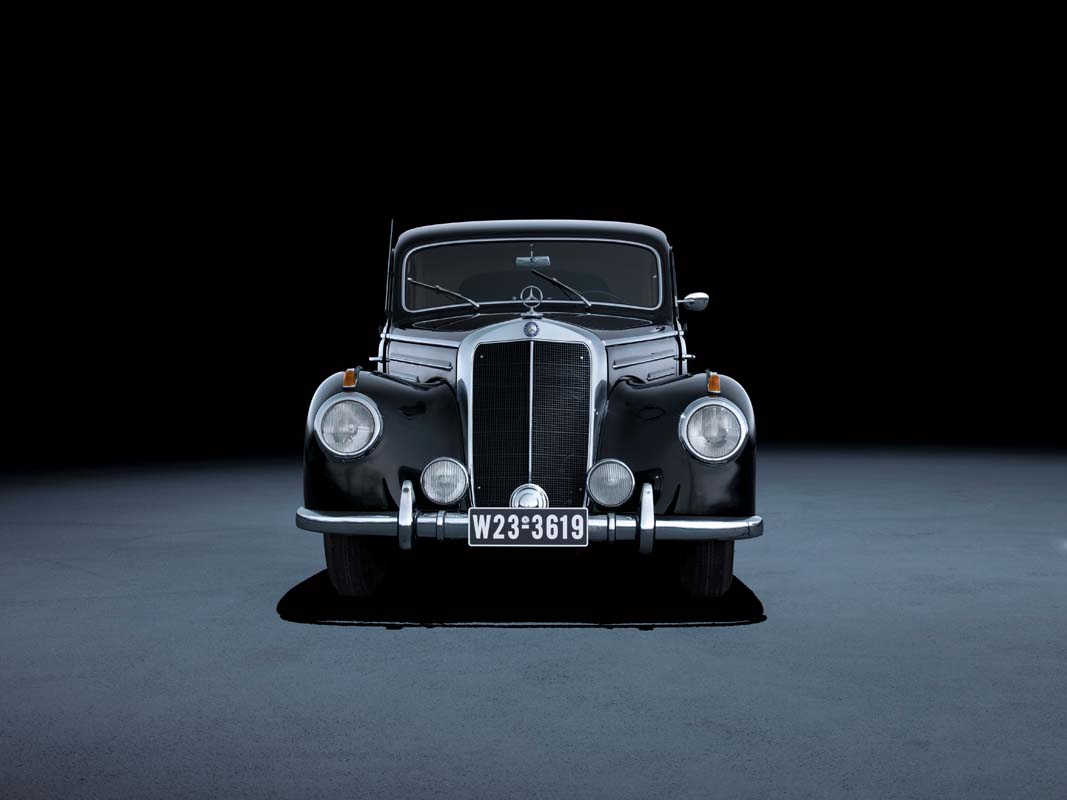 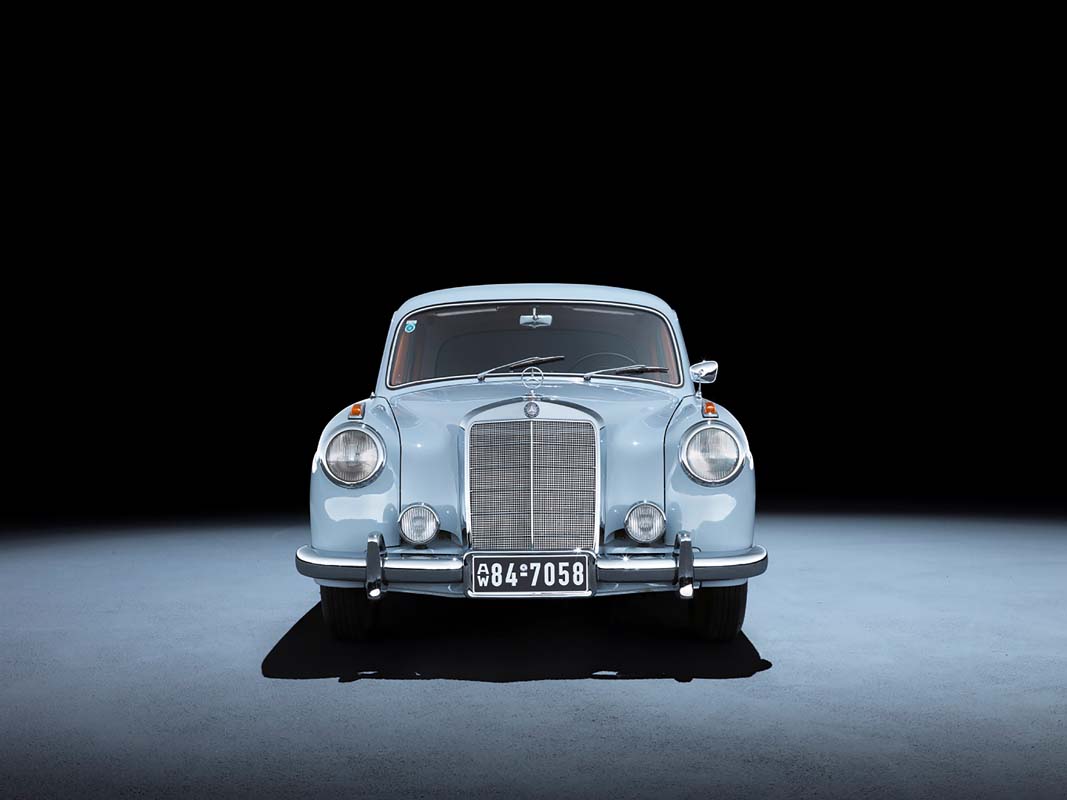 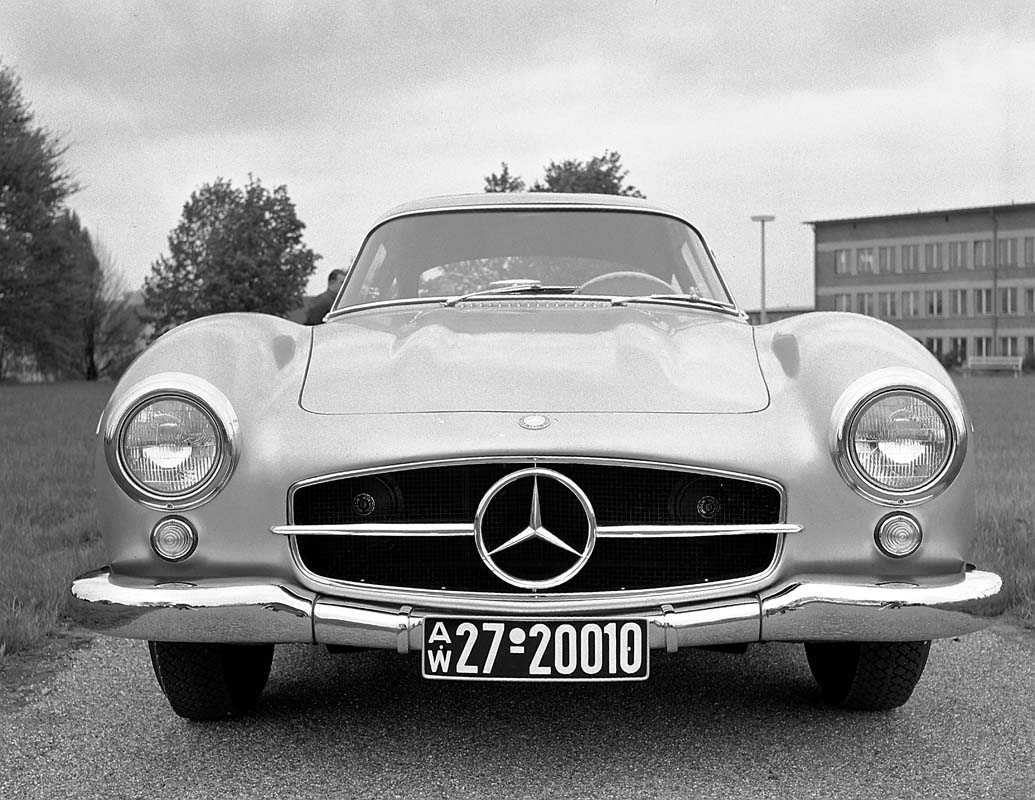 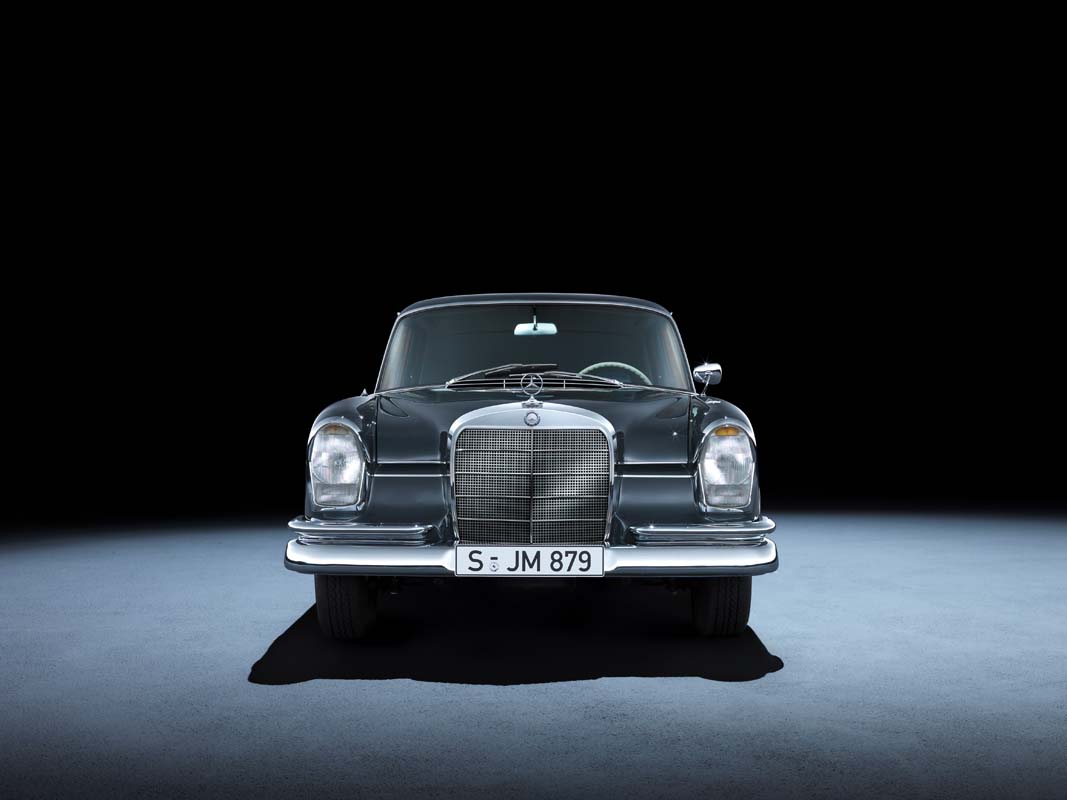 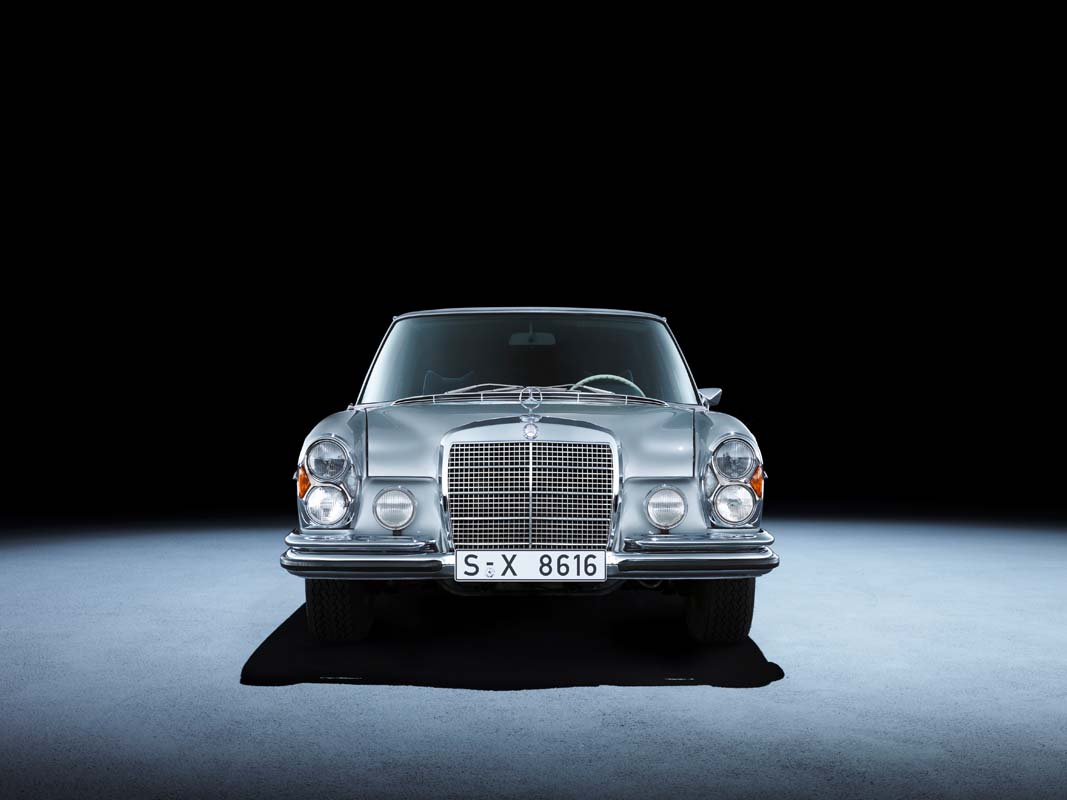 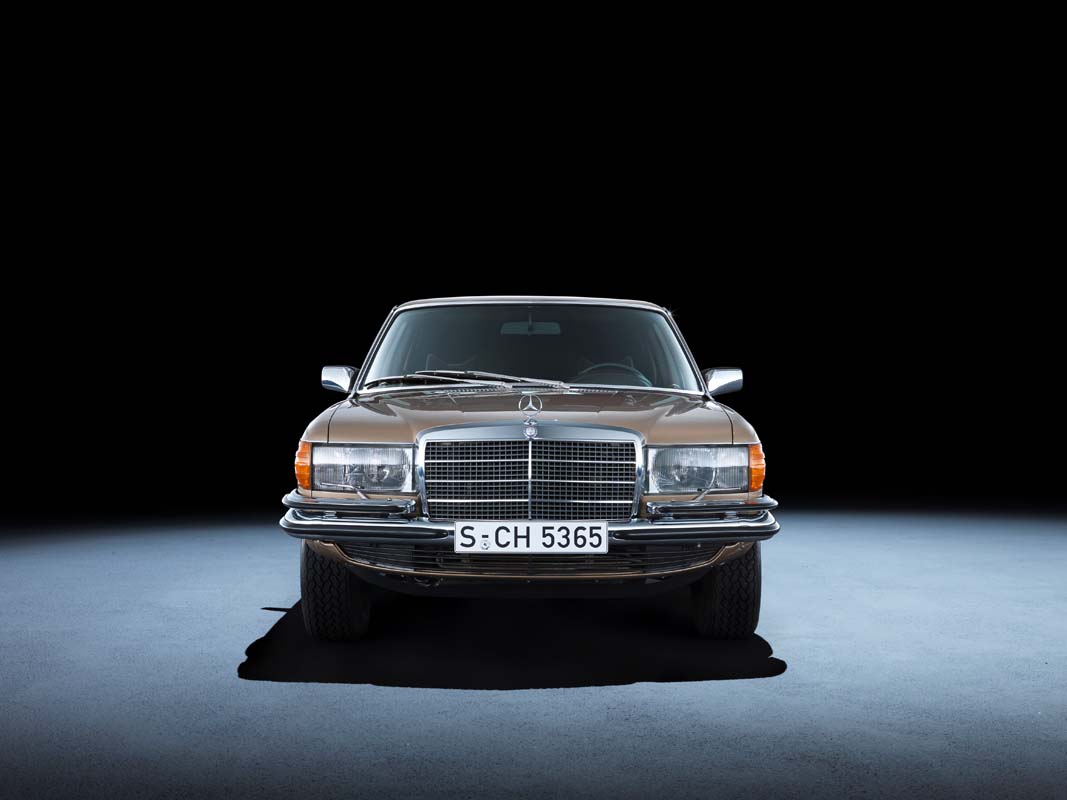 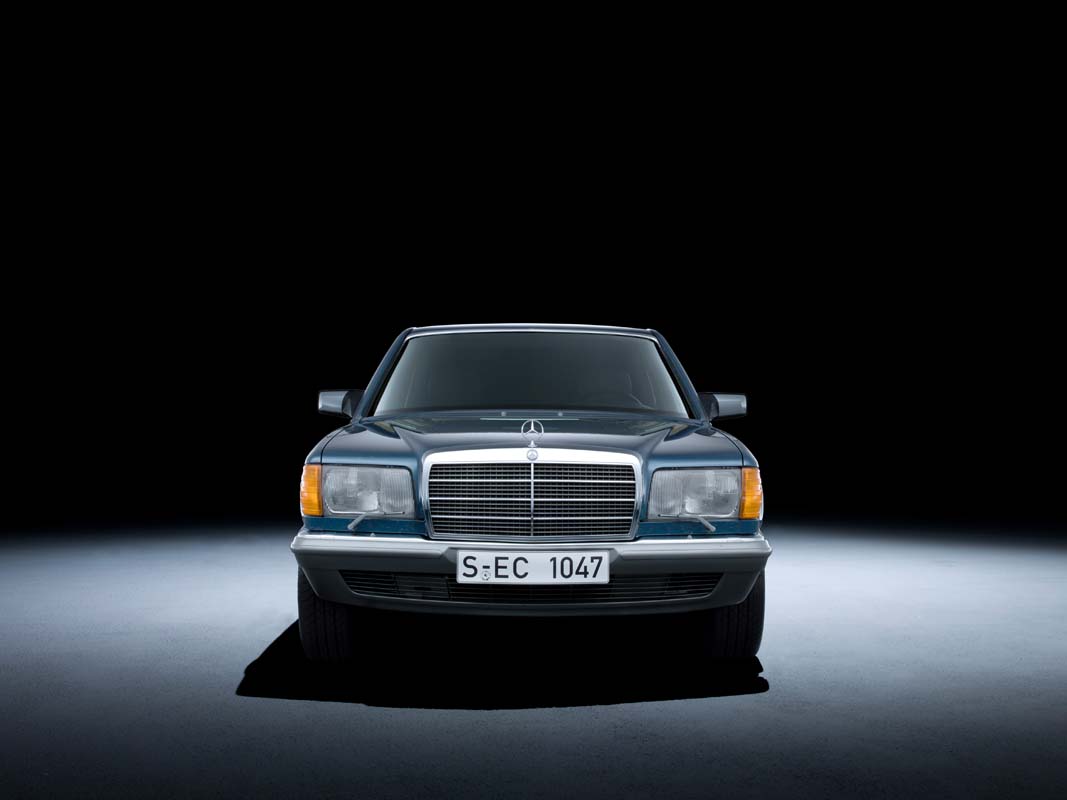 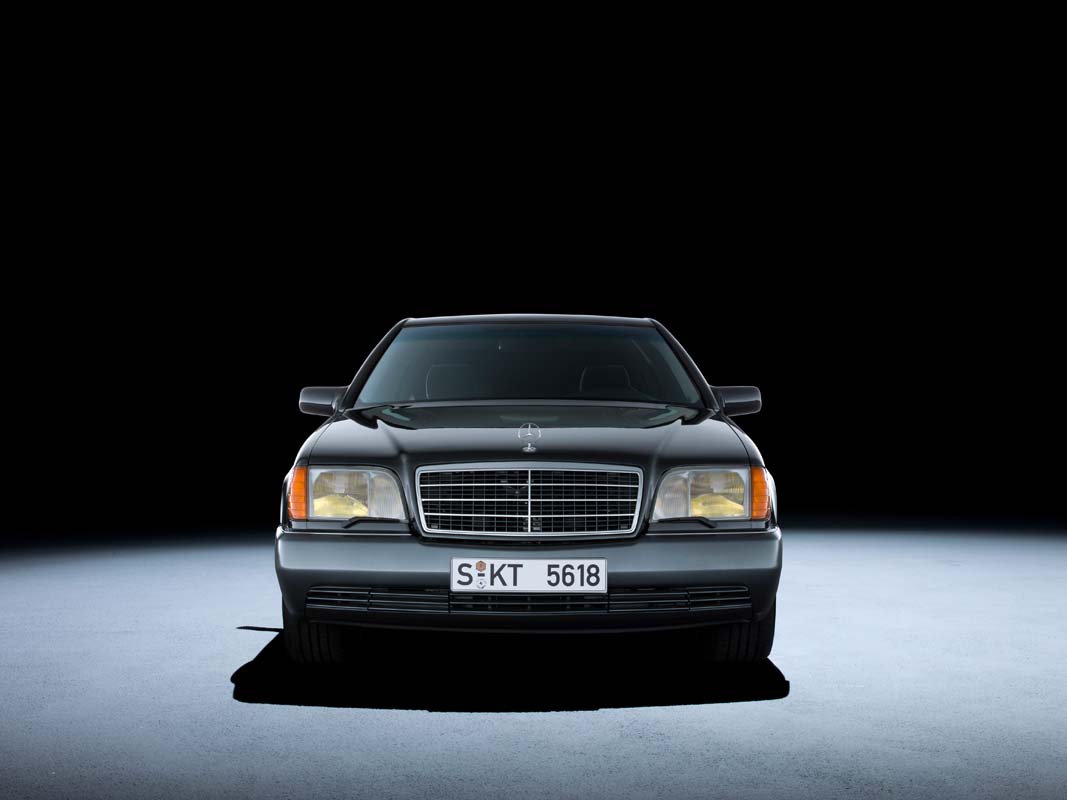 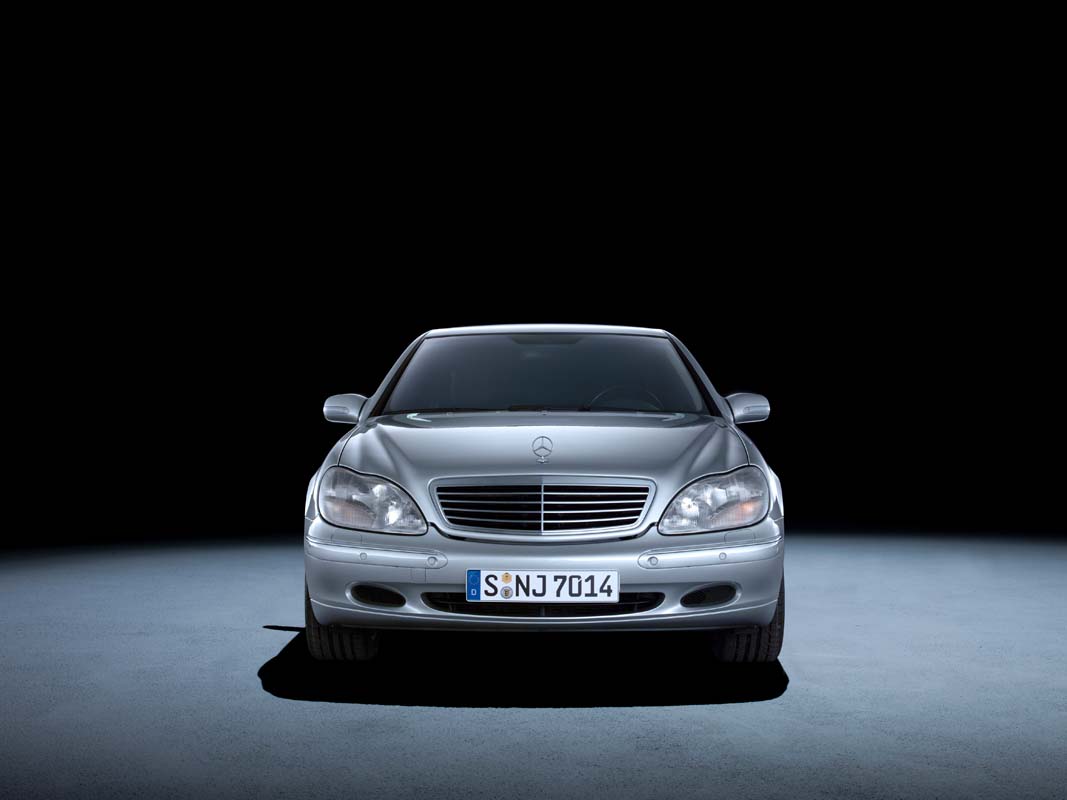 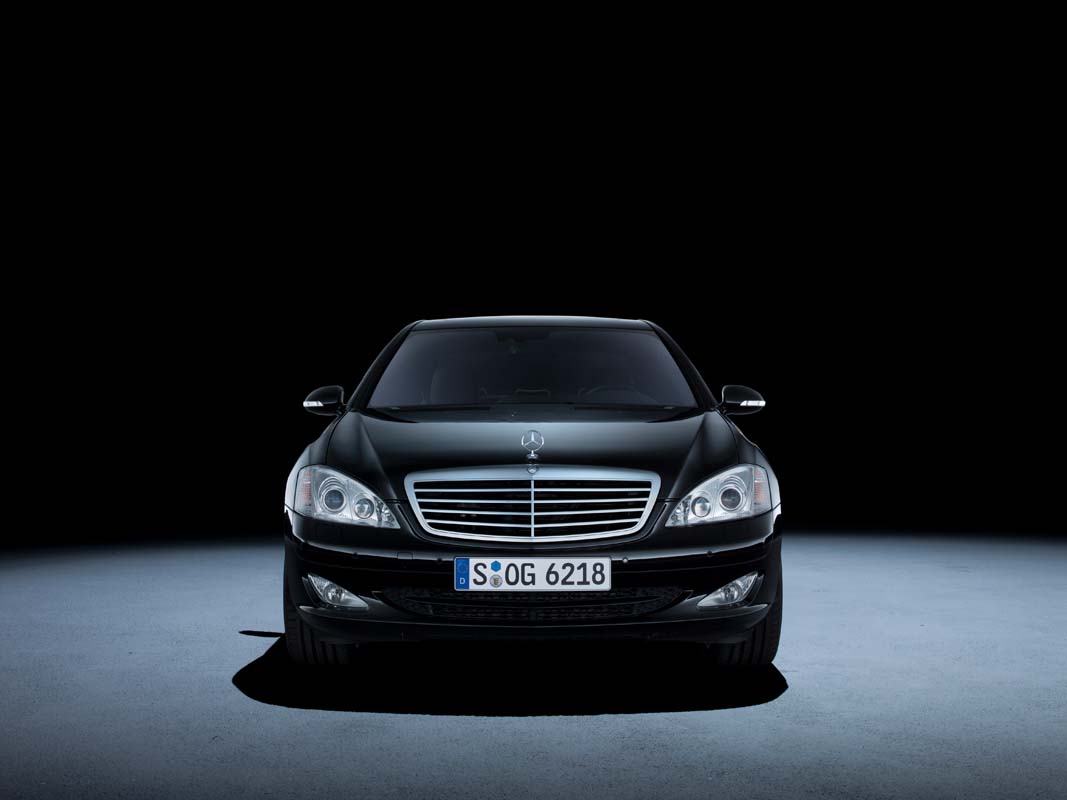 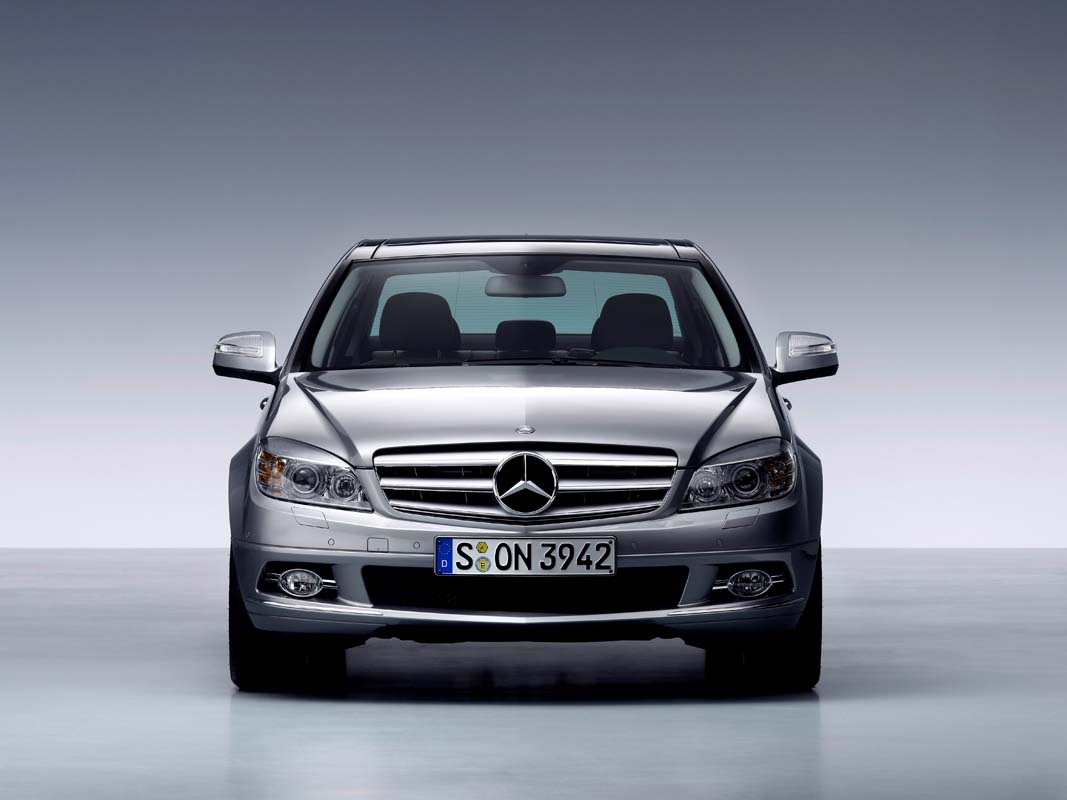 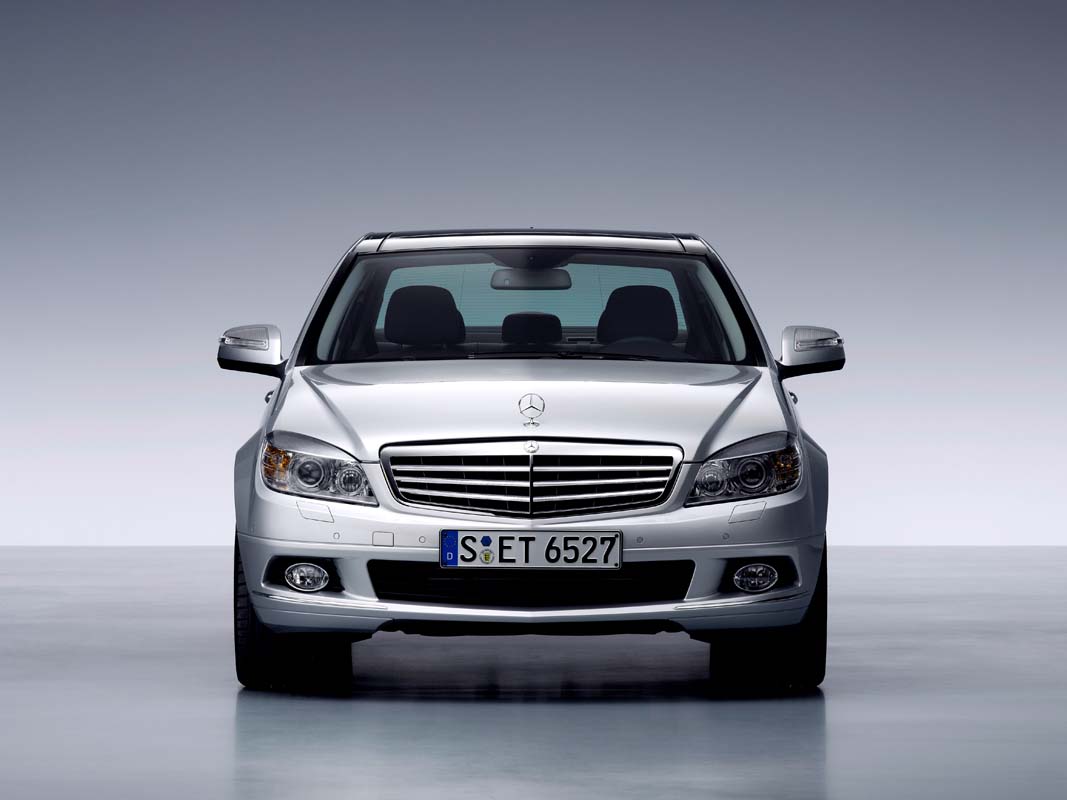 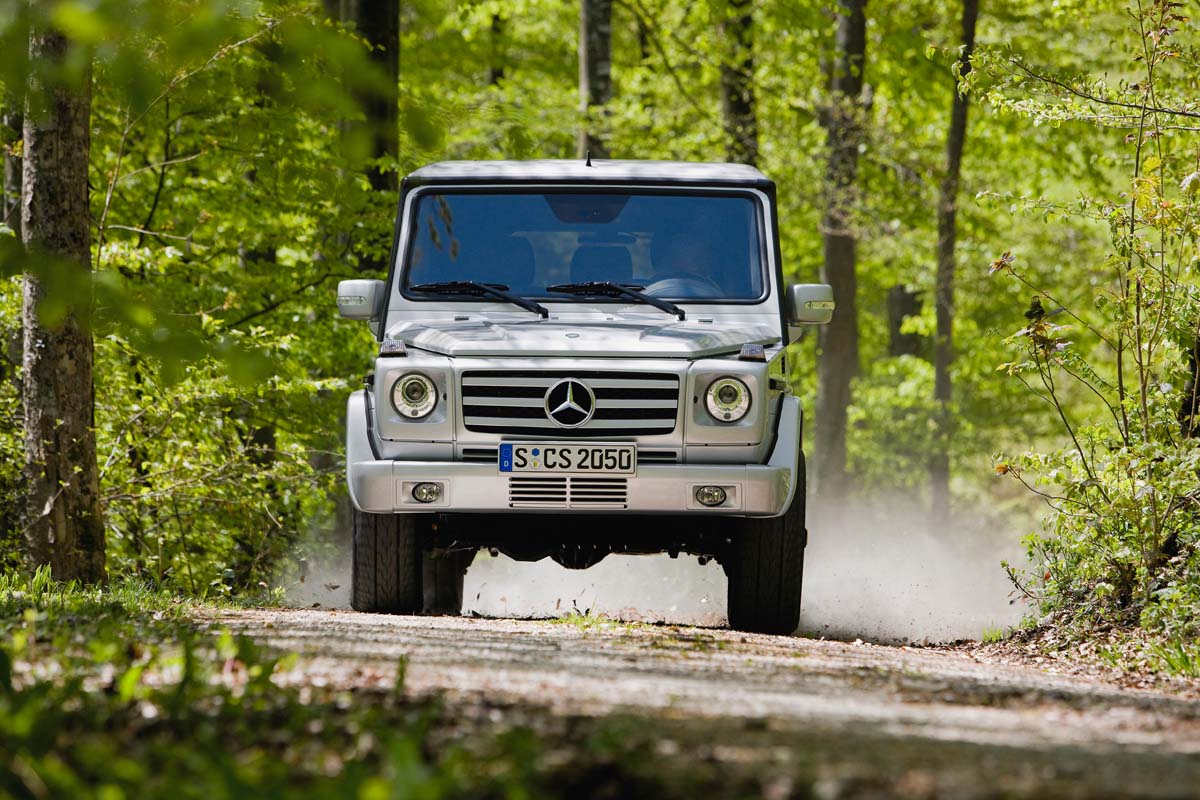 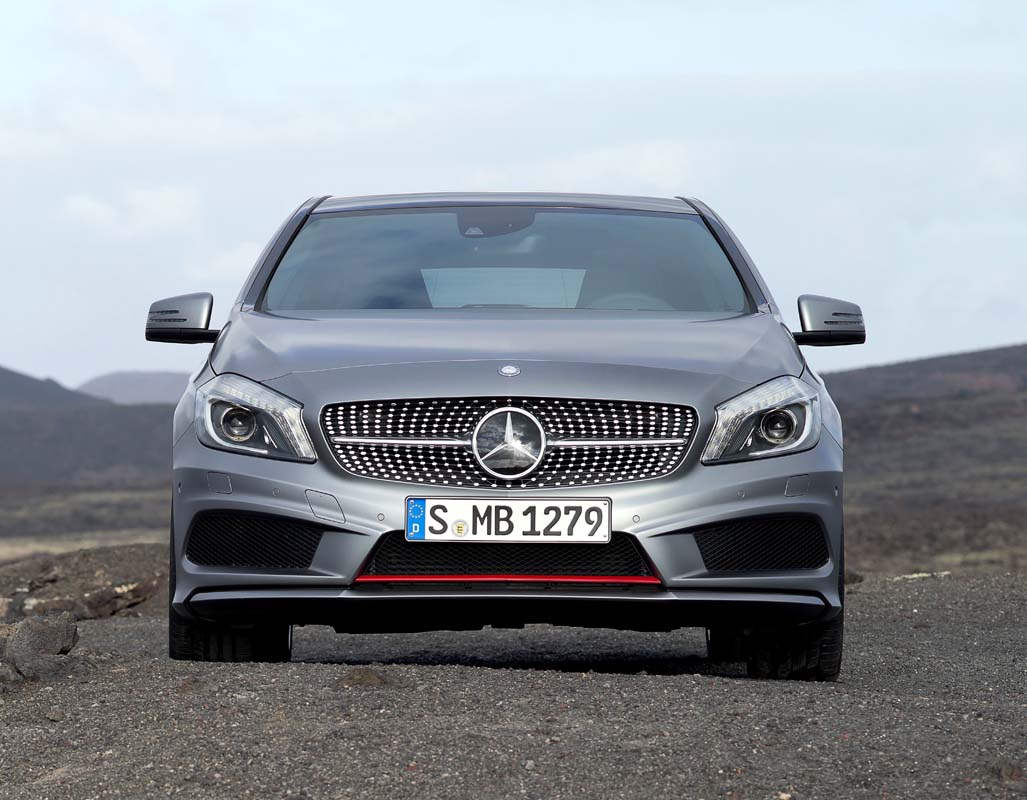 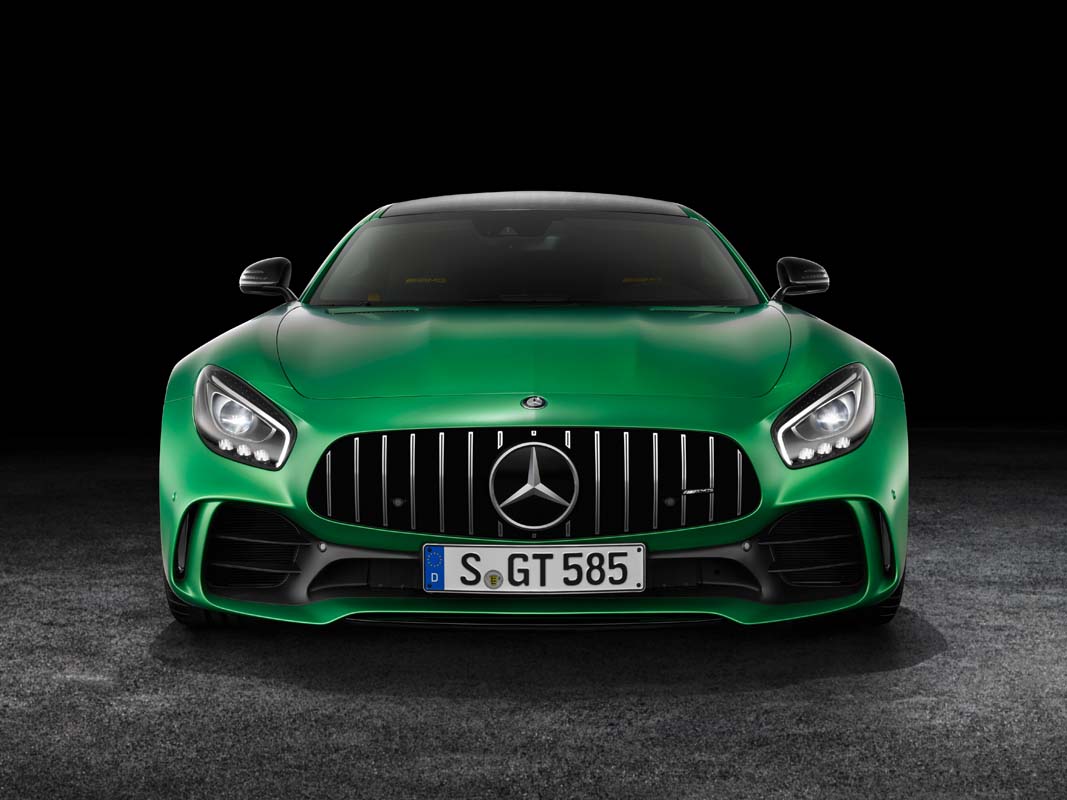 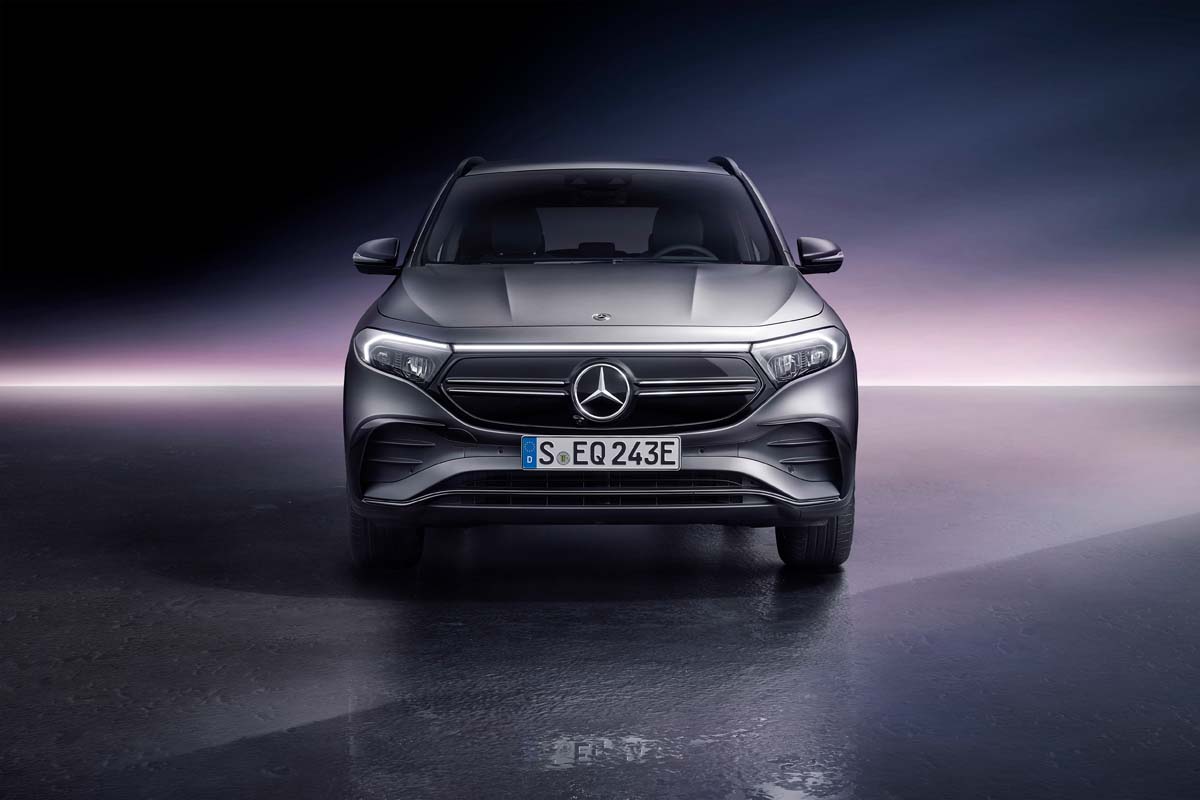 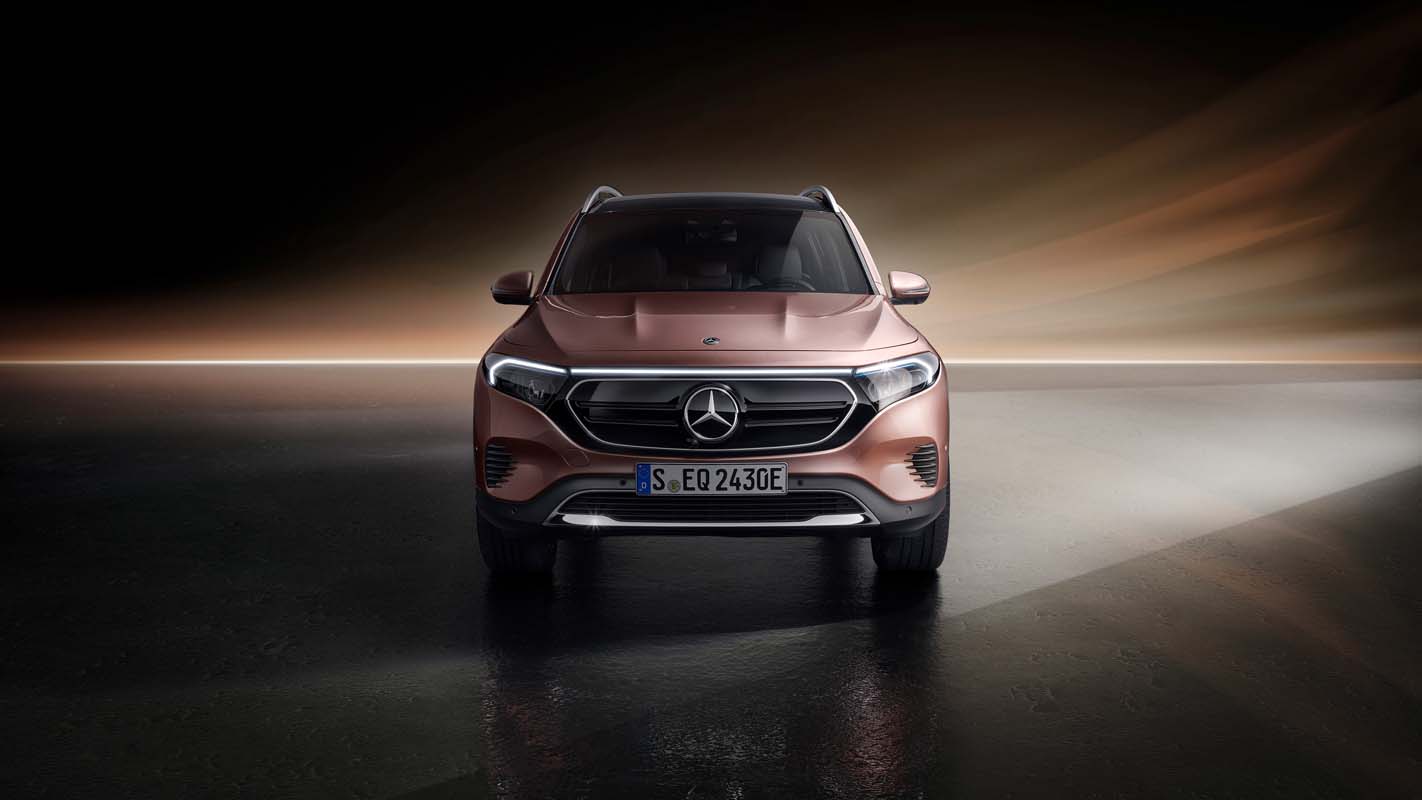 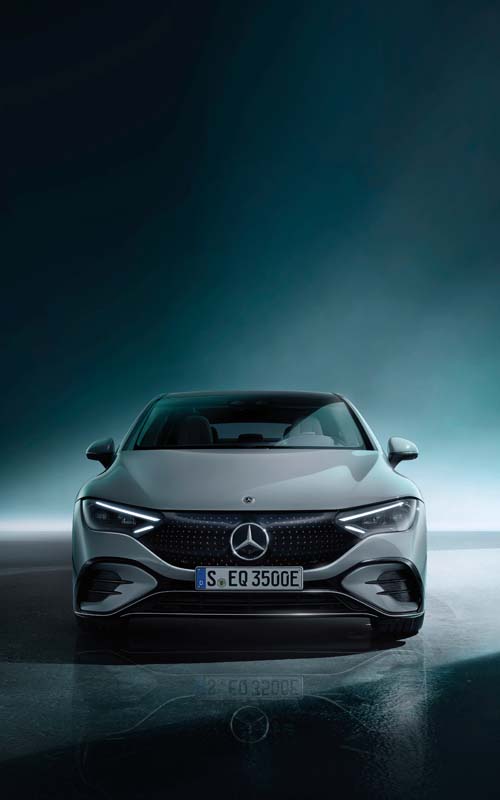 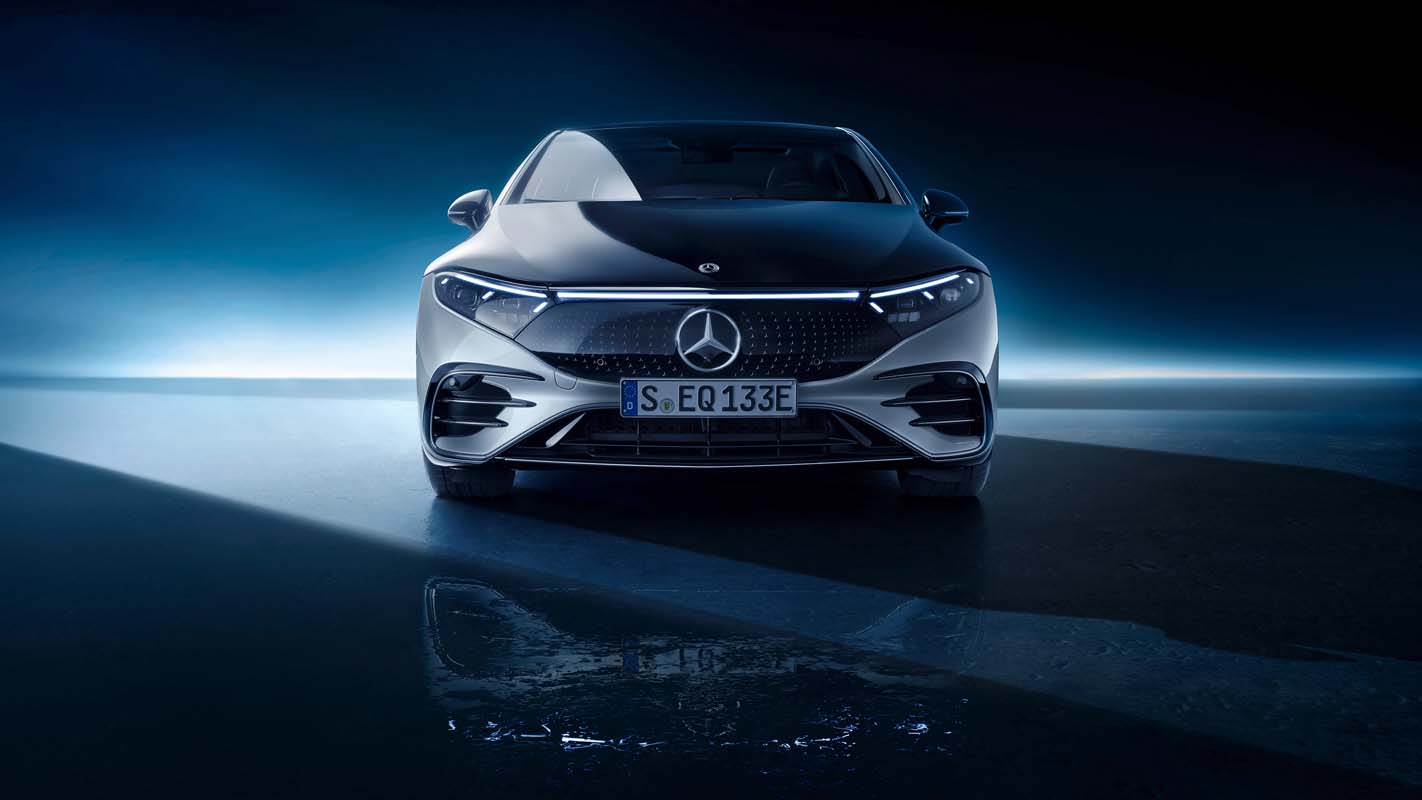 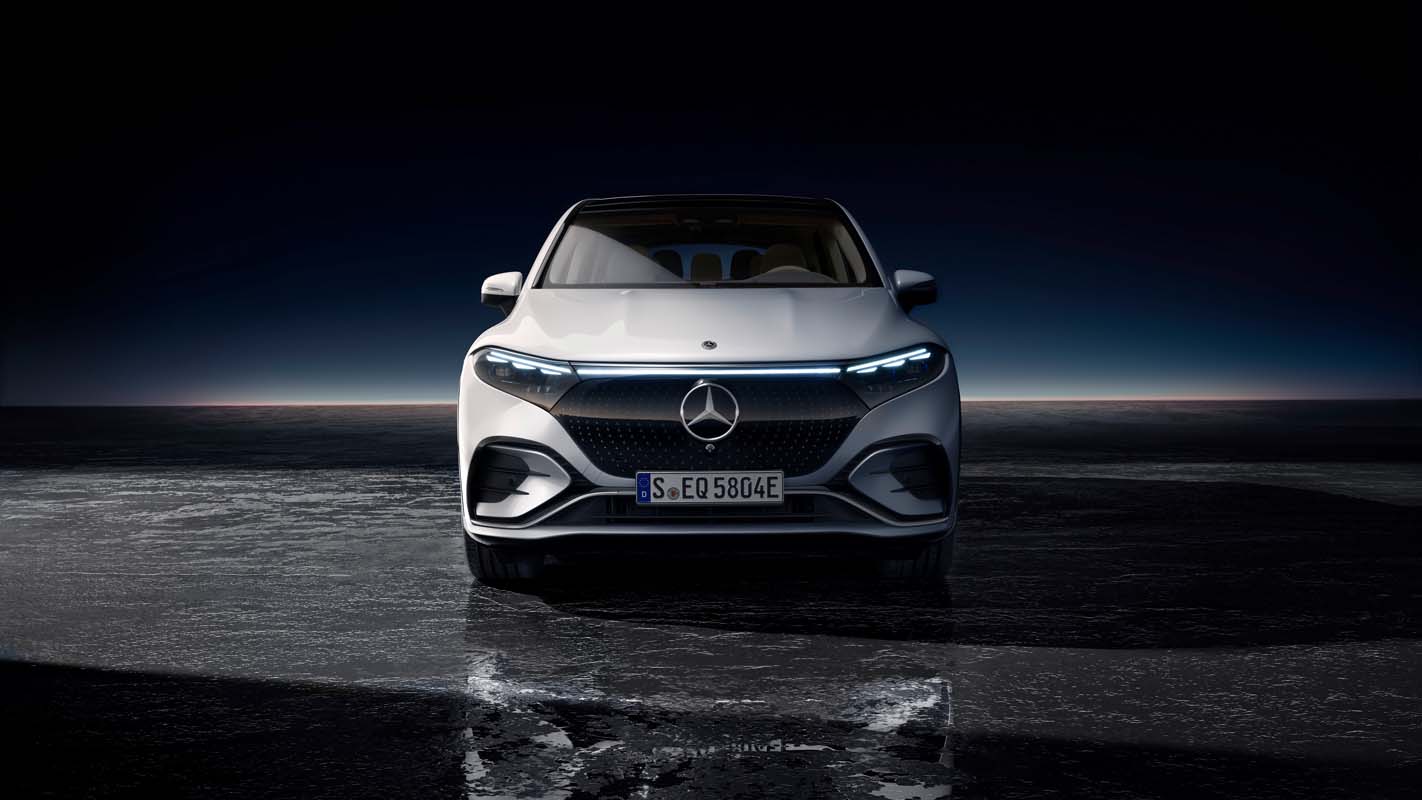 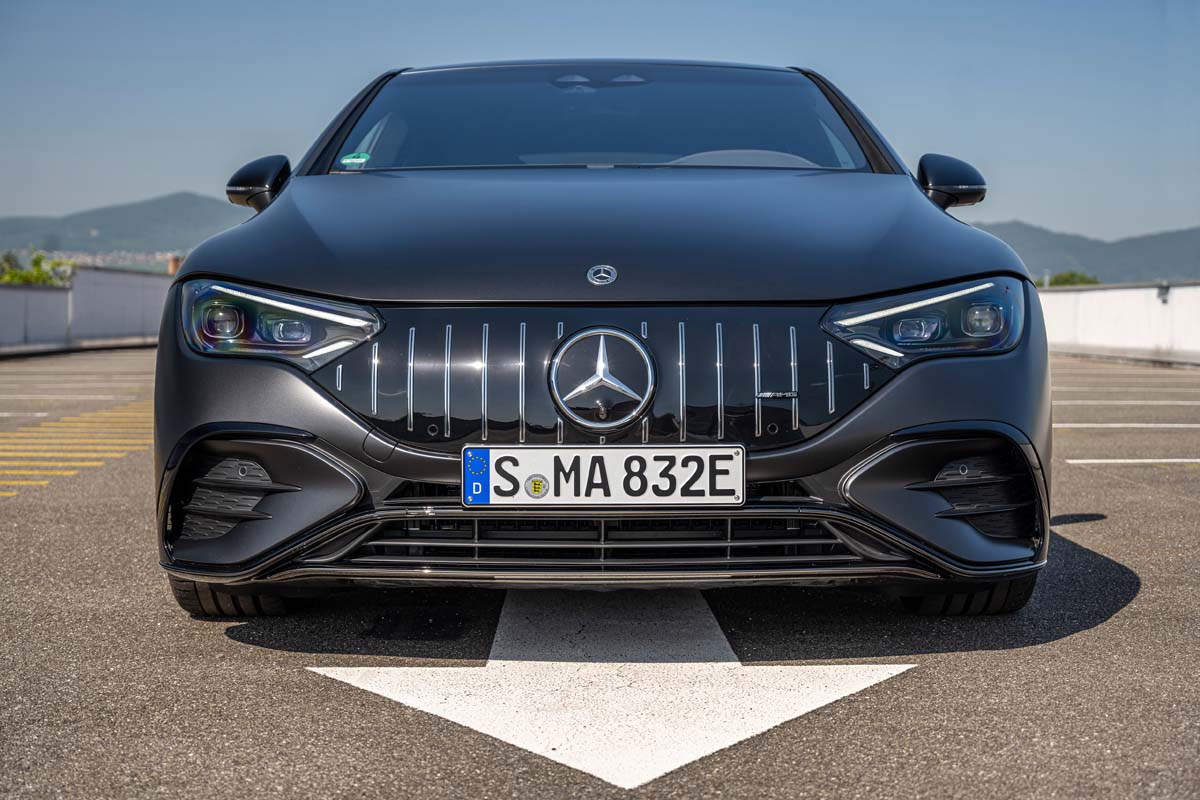 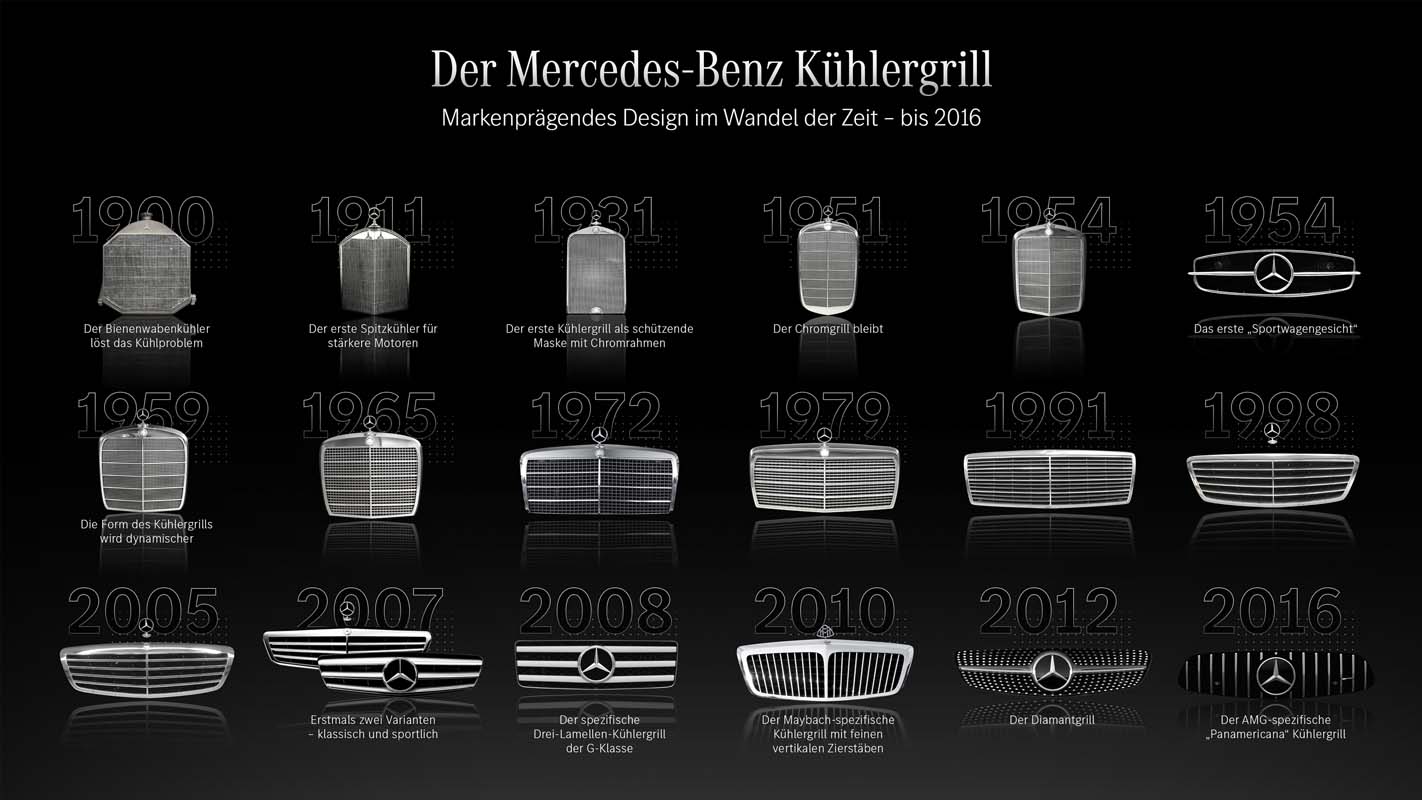 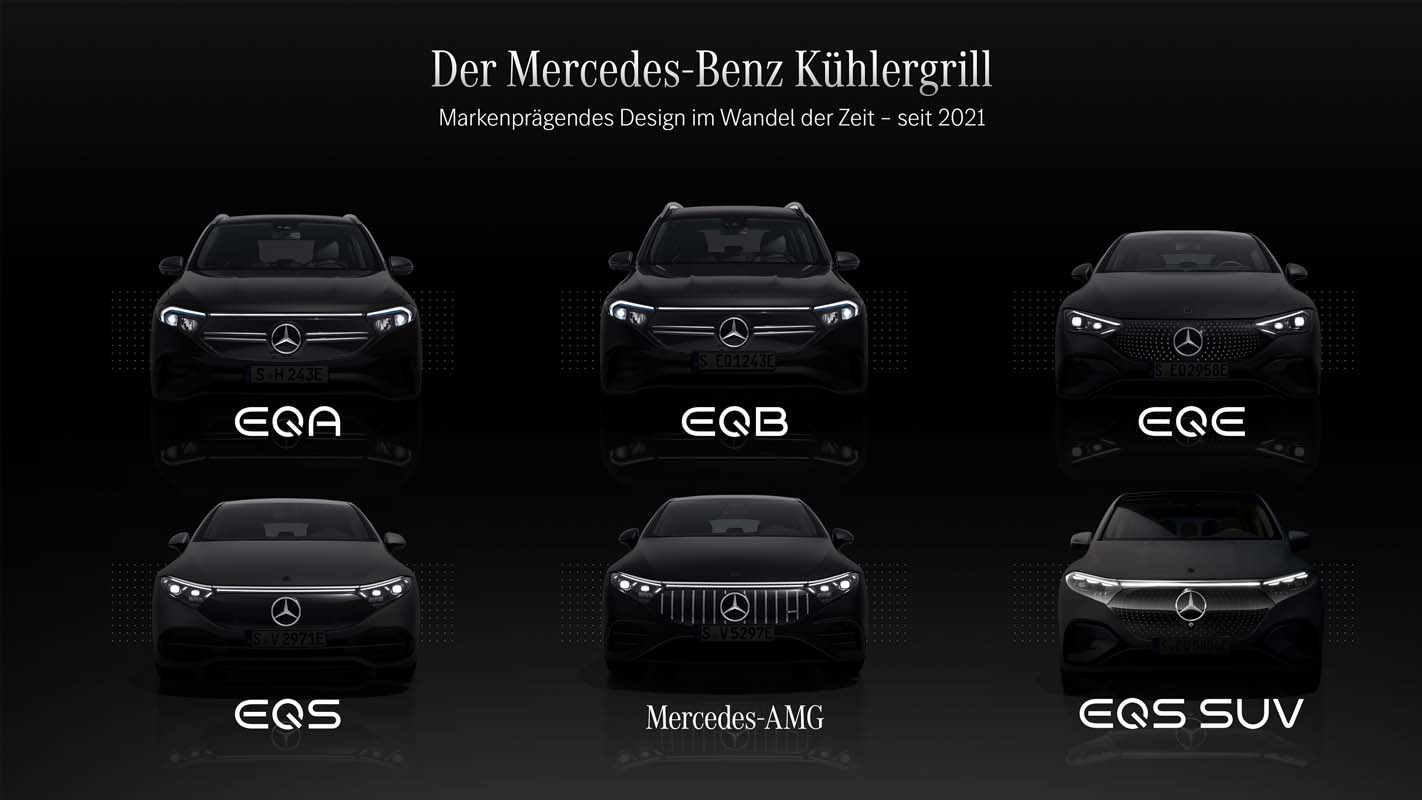 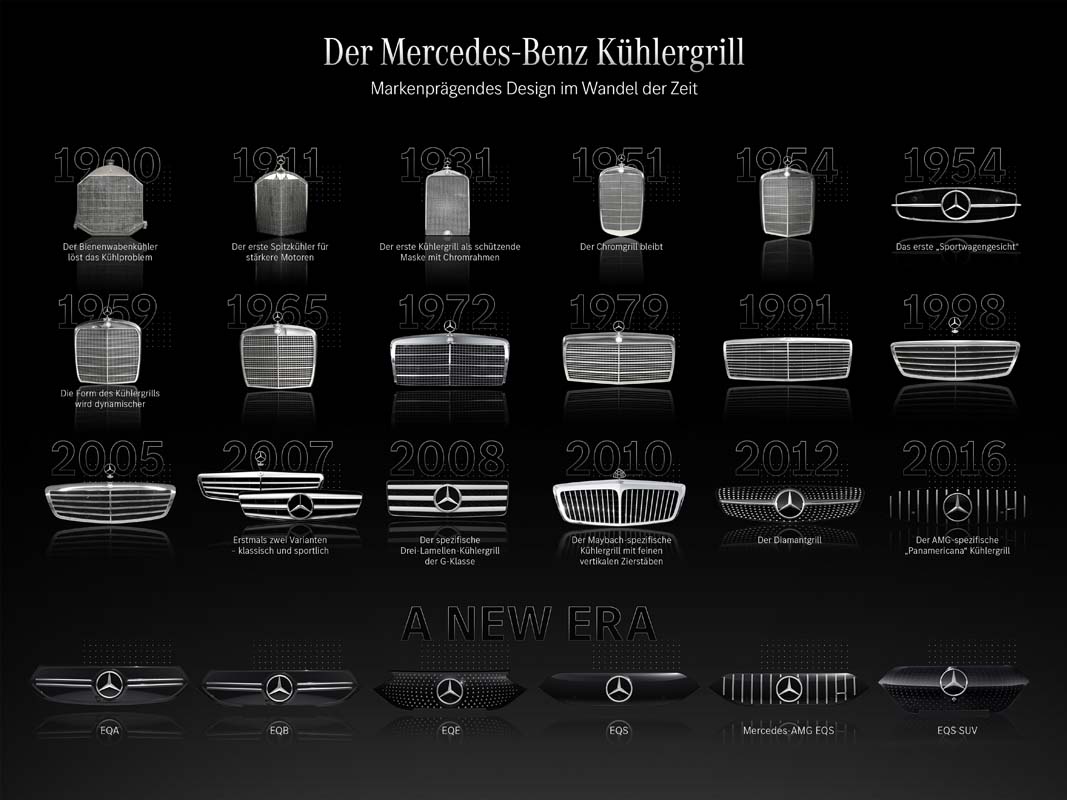 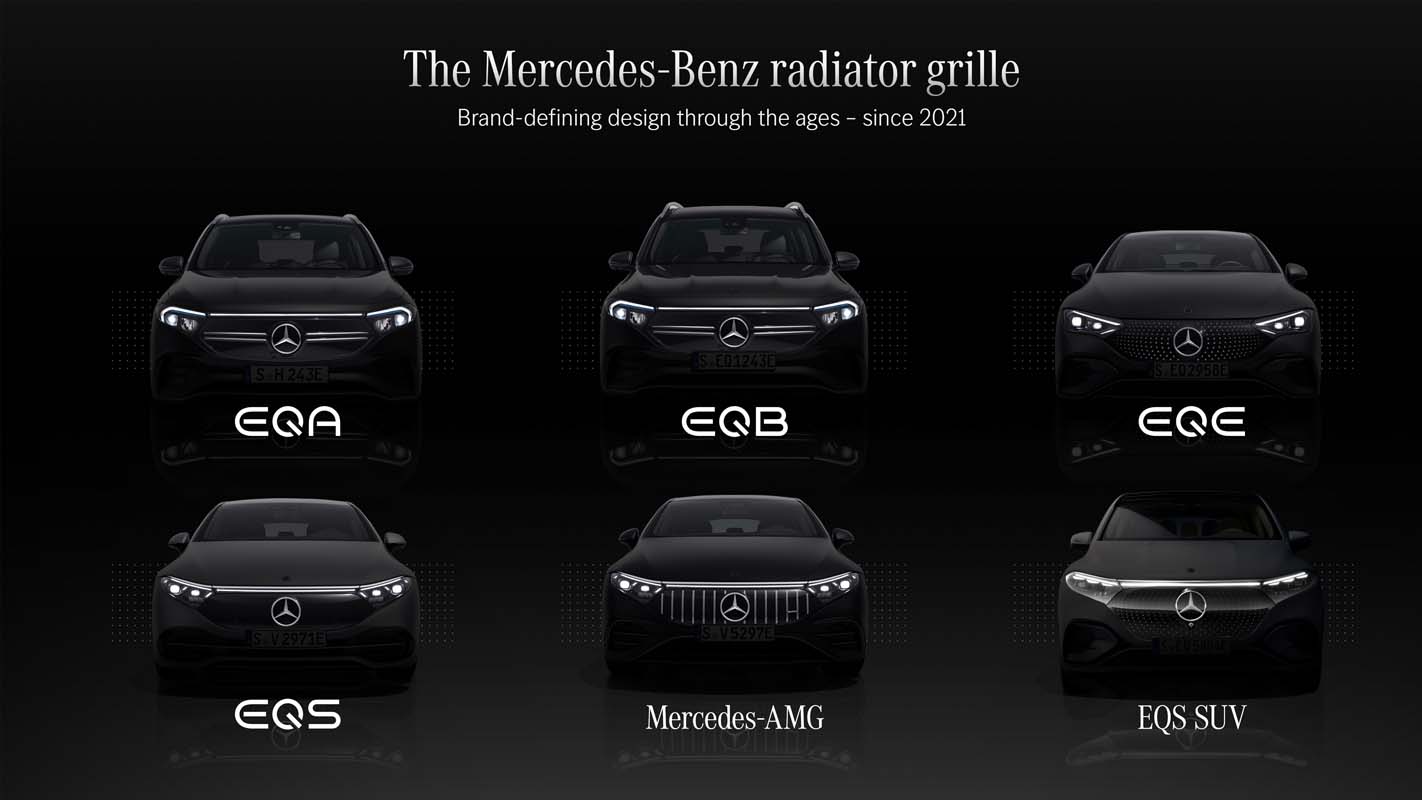