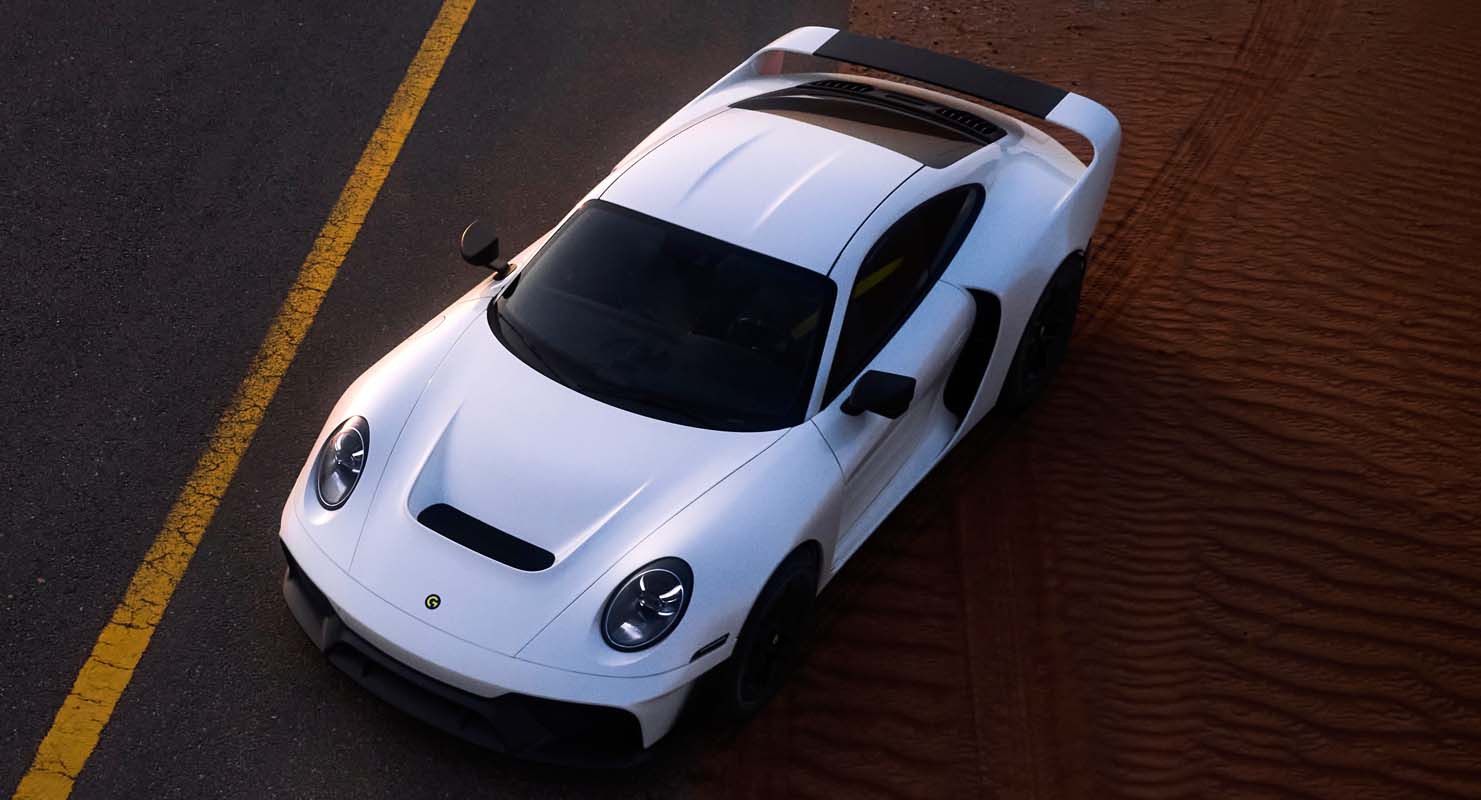 Today, Marc Philipp Gemballa has revealed its off-road capable, bespoke supercar to the world and confirmed its production name: MARSIEN.

With his newly founded company MARC PHILIPP GEMBALLA GmbH (not associated in any form with Gemballa GmbH), the 27-year-old entrepreneur and son of late Uwe Gemballa has launched his very first production ready supercar named MARSIEN starting a new era in 2021.

The launch film can be viewed here:

A NEW ERA BEGINS
Growing up in an environment where building the fastest and most powerful production car on the planet and setting the next world record on the Nürburgring was key, now over a decade down the road, the market has changed radically. Marc Philipp believes the horsepower game is over, that tuning is done by the OEMs themselves and that the market is constantly being flooded with an influx of new supercars with brandishing hyped horsepower figures. Marc Philipp realised, when aiming to build a successful company for the future and not just toss the next imitator product onto the market, he needed to come up with something very special for his clients.

AN ENTIRELY NEW CONCEPT – DEFINING A NEW SUPERCAR SEGMENT
Inspired by the legendary Paris Dakar rally era and more than two years of intense design and engineering development has resulted in the young entrepreneur’s first project: an ultramodern yet timeless looking supercar.

The new concept of the vehicle forms a hybrid between a modern-day supercar with all its comfort and day-to-day practicality combined with off-road capabilities enabling the ultimate driving experience for both on and off-road with the latest technologies.

BASED ON THE LATEST TECHNOLOGY
Looking for the latest cutting-edge platform featuring state-of-the-art technology for their first project and with the need of the base vehicle to be equipped with a modern and sophisticated all-wheel drive system to master the intense challenges in the off-road terrain, the all-new Porsche 992 Turbo S provided the perfect base to realise the young entrepreneur’s vision.

Manufactured in Germany, tested in the sand dunes of the Arabian desert and available to clients worldwide, production is limited to just 40 units with more than half of the small series production sold prior to launch. 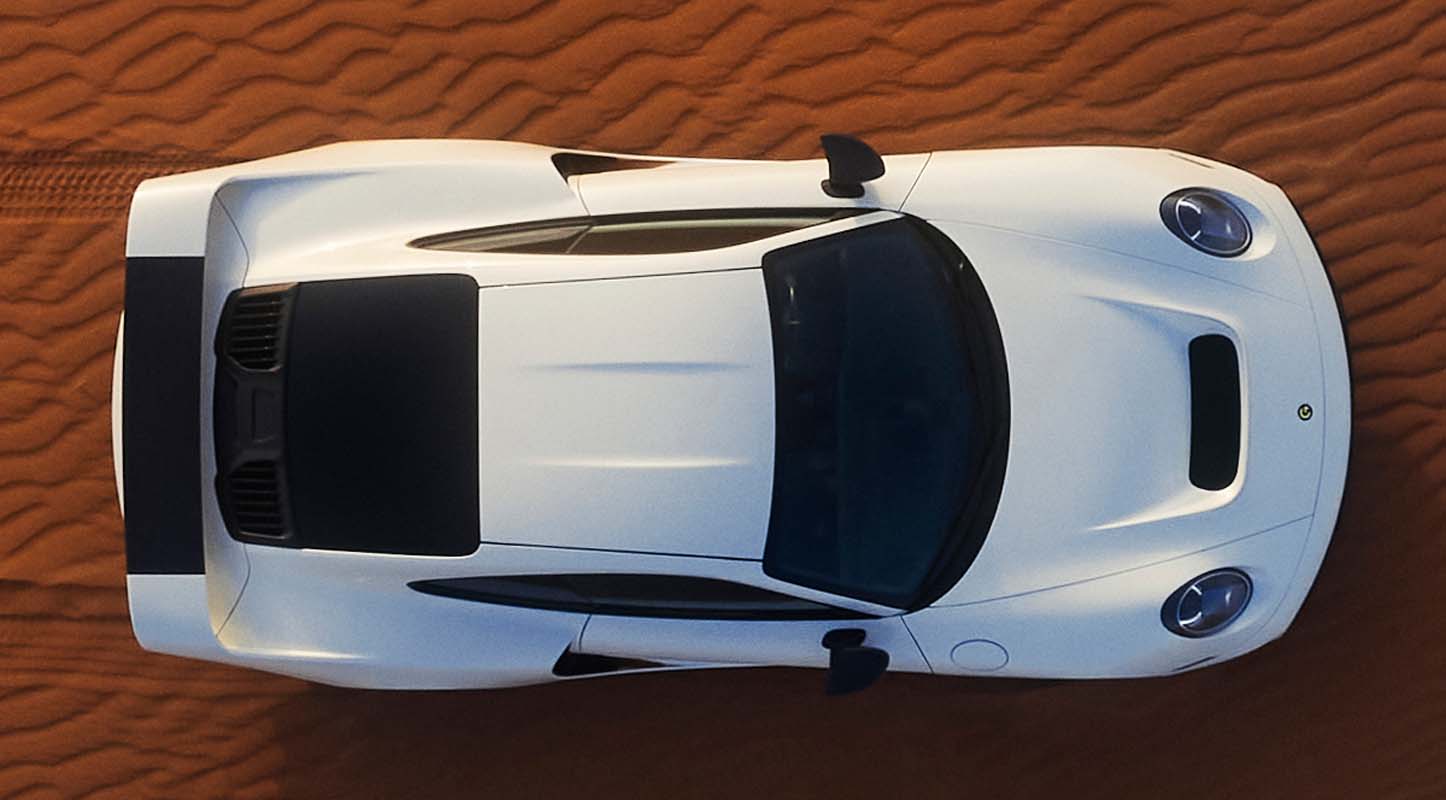 THE NAME – MARSIEN
With its outstanding design, cutting-edge technology and strong performance, the name of the vehicle needed the right moniker to capture its unique qualities and reflect the characteristics and DNA of the vehicle.

During the intense test phase in the beautiful Al Faya desert, the development team was amazed by the stunning red desert sand in combination with the sharp fossil rocks and mountain backdrops shaping the landscape of the desert making it very special and unlike any other. “We felt like as if we were in an entirely different universe,” says Marc Philipp Gemballa. The Al Faya desert located in the emirate of Sharjah in the United Arab Emirates has been famous ever since for its unique and extremely red desert sand and Mars-like environment visually. “Since it looked and felt like we were on Mars paired with the futuristic design and the vehicle’s off-road capabilities, we couldn’t think of a more fitting name for our first project.”  The name ‘MARSIEN’ was born – derived from the French word ‘Martian’ or ‘from Mars’.

For the design, Marc Philipp Gemballa left nothing to chance and brought on board designer and Porsche aficionado Alan Derosier, known for his stunning Porsche 908 design study, who has been responsible for the ultra-modern yet timeless looking design of the MARSIEN. His artistry can be found in every smooth curve and sophisticated lines of the MARSIEN’s spectacular and timeless design.

Besides the full carbon fibre body, the exterior features functional design upgrades such as a completely bespoke taillight. Featuring the latest LED technology, the rear light has been developed together with light specialist GERG Lighthouse, enabling a completely holistic design appearance of the MARSIEN.

The shape of the MARSIEN had to prove its aerodynamic efficiency and undergo intensive CFD (Computational Fluid Dynamics) analysis. A development effort that is crucial for optimum driving dynamics at all speeds, efficiency, and maximum safety. A task which has been accomplished by engineering partner KLK, who has gained expertise in developing aerodynamics for LMP1, Formula E, and Formula One racing teams for over 20 years.

The MARSIEN is currently undergoing full road homologation process by renown and certified German technical service provider FAKT, who has been integrally involved in the development of the body. Marc Philipp Gemballa’s technical team are working hand in hand with FAKT to ensure the vehicle successfully passes the relevant crash tests required for approval and road homologation in Europe (including Switzerland), Middle East, the USA, as well as other major global markets in the future.

The exterior paint is applied by a state-of-the-art and certified paint shop via a team that is able to fulfil the most daring customer colour requests. The launch vehicle has been painted in an elaborate tripe layer pearl white with special metallic flakes and received additional protection through a ceramic coating. 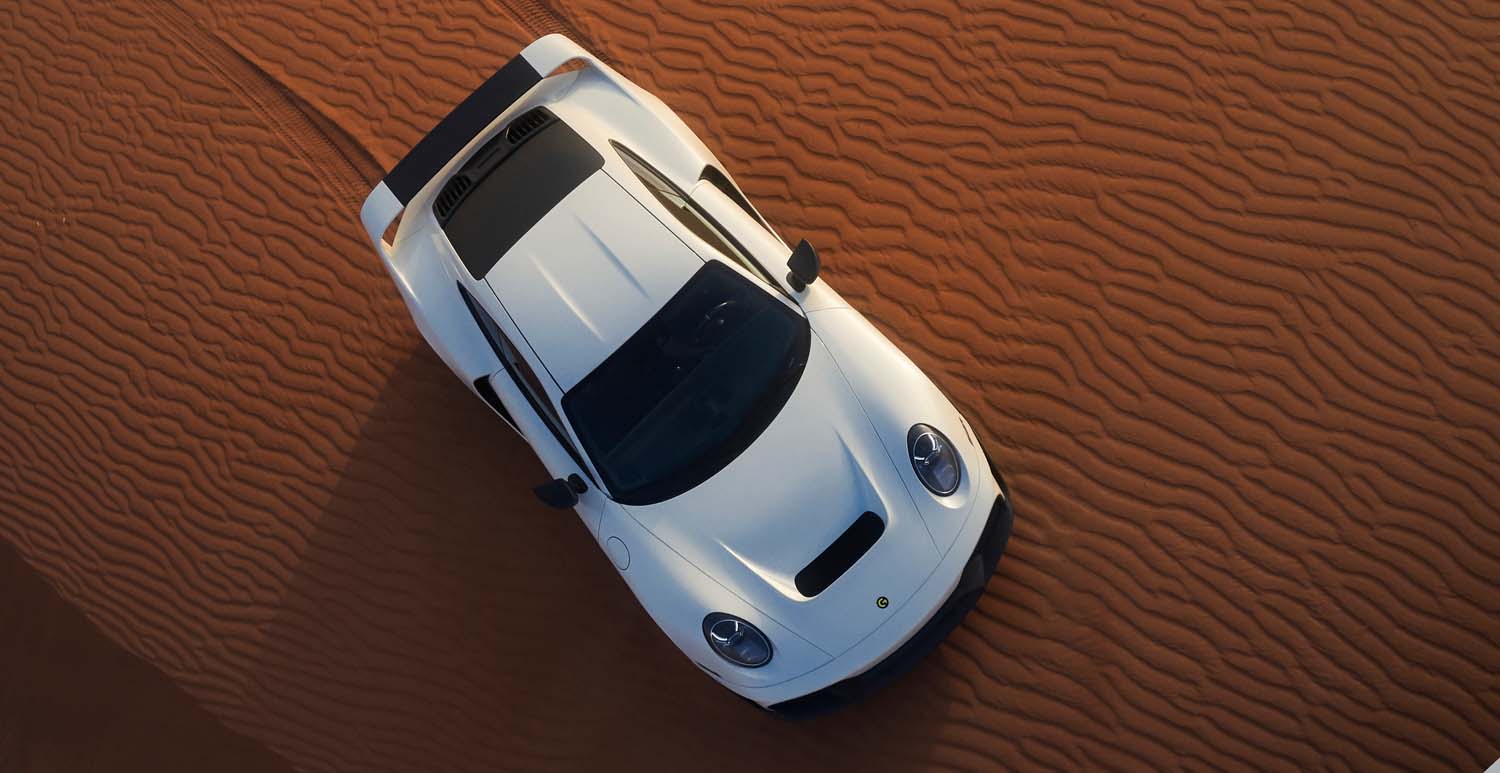 THE DRIVETRAIN – POWERED BY RUF
A truly bespoke vehicle requires a unique powertrain of the highest quality. Consequently, Marc Philipp Gemballa teamed up with legendary Porsche engine specialist RUF Automobile for the engine development of the MARSIEN. Founded in 1981, RUF Automobile is known for its Porsche engine expertise, having already worked with Marc’s father Uwe Gemballa to produce powertrains for various vehicles in the 1980s.

The engine upgrade ‘POWERED BY RUF’ enables the six-cylinder boxer engine to deliver over 750 horsepower and 930 Newton meters of torque. “Despite the enormous power reserves, the engine complies with the latest EURO 6 emissions regulations and has been subject to the strictest WLTP and RDE tests,” explains Moritz Renner, technical director of MARC PHILIPP GEMBALLA GmbH.

For clients that are looking for even more power, there is second stage power upgrade by RUF Automobile taking the engine up to 830 hp with enhanced VTG turbo chargers and a revised ECU mapping and transmission setting.

The engine is protected from overheating even under extreme conditions. The airflow of the central radiator has been completely redesigned, now directing the hot air from the radiator through a NACA duct over the carbon fibre bonnet and around the A-pillars, to the rear of MARSIEN.

BMC, the air filter specialist based in Italy has developed an air filter insert that is uniquely fitted for the dusty conditions in the desert. While protecting the engine from dust and foreign particles, it maintains a sufficient flow of fresh air to allow the engine to work optimally. With innovative technology and first-class design, the drivetrain is singularly equipped for the MARSIEN.

The Porsche PDK transmission has also been revised and adapted to the new conditions so that the enormous power reserves arrive at all four wheels without loss consistently. Extended driveshafts have been developed with reinforced Porsche Cayenne joints to reliably enable the enormous spring deflection and the engine’s high torque.

For the sound of the vehicle, the leading performance exhaust manufacturer Akrapovič has developed an entirely new titanium exhaust system exclusively for the project, focusing on a bespoke sound experience, light in weight and further increasing the power output of the RUF Automobile-upgraded boxer engine.

CUTTING EDGE SUSPENSION AND CHASSIS TECHNOLOGY
For the suspension the young entrepreneur teamed up for a technological partnership with the leading suspension and chassis technology pioneer KW Automotive. Together the two companies have developed a bespoke suspension system, which has been exclusively created for the MARSIEN. The off-road capable supercar has had extensive changes to the chassis of its base vehicle including a completely new developed double wishbone front suspension setup equipped with KW Automotive’s solid piston damper technology, featuring an intelligent active damper control as well as an adjustable ride height system for on road and off-road use.

At the touch of a button, the adjustable ride height system enables an electronically controlled hydraulic lift increasing the ride height from Turbo S on road level, up to an overall ground clearance of 250 mm, enabling the ultimate on and off-road driving experience.

Due to the Dynamic Damping Control (DDC) system, the compression and rebound forces of the dampers are optimally adjusted in real-time, ensuring immediate response behaviour. Each damper contains two electromagnetic proportional valves that regulate the forces separately and adjust the damper forces within just 20 milliseconds perfectly to any driving situation, no matter which terrain – be it on snow, sand, or the worst dirt road imaginable.

Furthermore, the driver can choose between several driving modes via the drive mode knob on the steering wheel, which automatically adjusts damper, transmission setting, engine mapping, as well as the ride height accordingly for the selected drive mode. Besides the standard Porsche modes, the new off-road modes include gravel, mud, sand, and snow – always protected by solid aluminium skid plate, covering the entire underbody of the vehicle.

For perfect driving conditions in both on road and off-road mode, the MARSIEN comes with two specially designed forged aluminium wheel sets with centre locking system, running on Michelin Ultra High Performance (UHP) tyres for on road and All Terrain tyres for off-road use.

And for the drivers looking for the ultimate off-road experience and don’t mind limited road usability, there will be an optional off-road package equipped with Reiger Suspension rally specification off-road dampers further enhancing the suspension travel and increasing the ground clearance to a fixed off-road ride height. 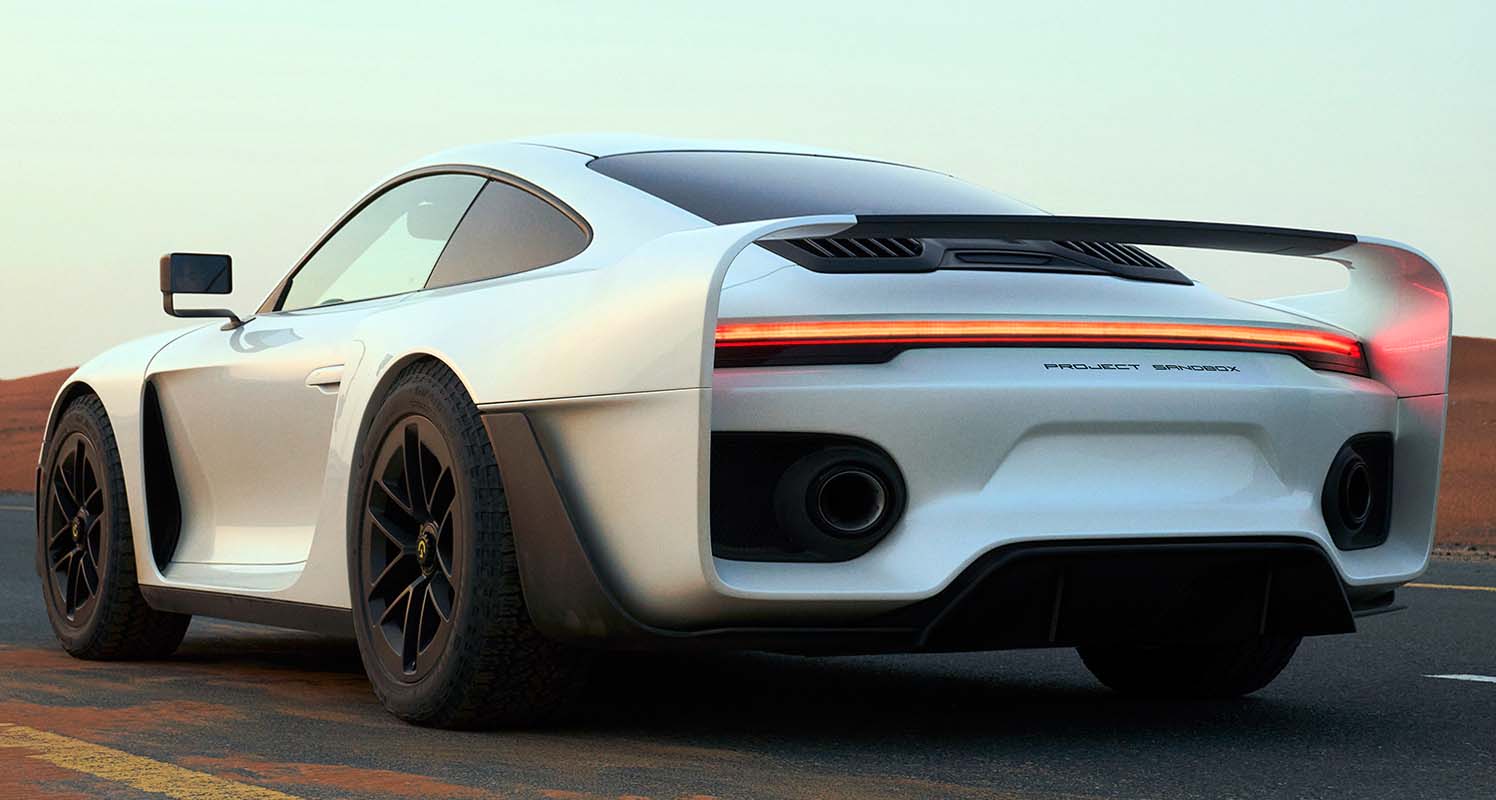 GRANTING BESPOKE INTERIOR DREAMS
The MARSIEN’s interior design echoes the elegance of the exterior. The conversion comes with a full leather or Alcantara interior handcrafted with the highest quality of materials, equipped with a bespoke Carrera GT-inspired lifted carbon fibre middle console, as well as GT style door lashes, carbon fibre side sills, and further carbon fibre accents throughout the interior with the ability to full customisation.

The interior is an example of the fine balance between form and function, with tasteful handstitching of the logo and paddles for manual gear switching. Similar stitching can be found on the floor mats and headrest, while the logo is imprinted on the fire extinguisher and the armrest.

Finally, the metal plaque displaying the individual production number of the limited series of just 40 bespoke vehicles is embedded in the carbon fibre centre console – giving a special touch to the cabin. These small details give the interior its unmistakable character, while the MPG yellow sets the tone.

Prior to the world premiere of ‘Project Sandbox’, the MARSIEN has already been in high demand: besides the exclusive launch edition, limited to only ten units, more than half of the small series production series has sold out before the official launch, leaving only a few of the original 40 vehicles available, while MARC PHILIPP GEMBALLA GmbH is preparing for the start of serial production later this year.

The price for conversion starts at EUR 495,000 net excluding taxes, duties, shipping, plus any special options and the cost of the Porsche 992 Turbo S base vehicle. 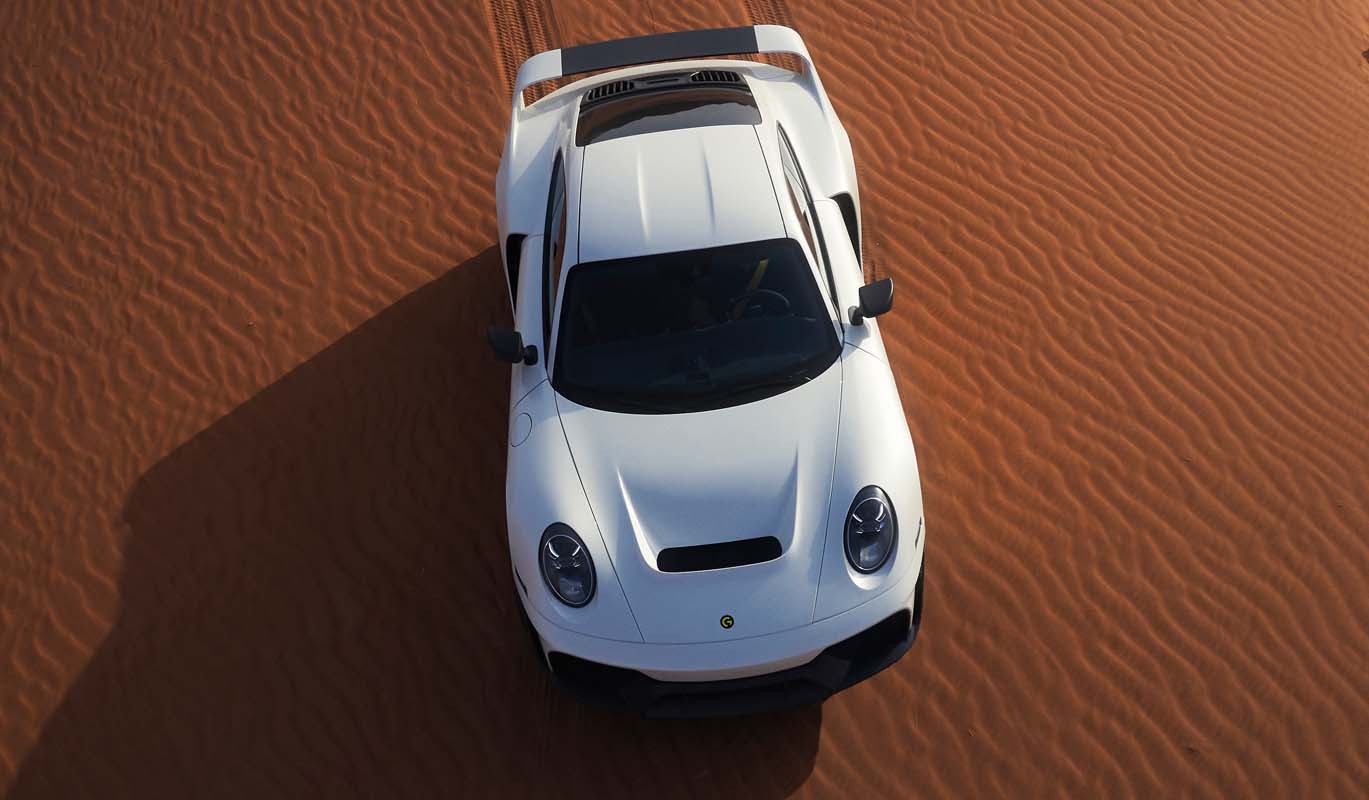 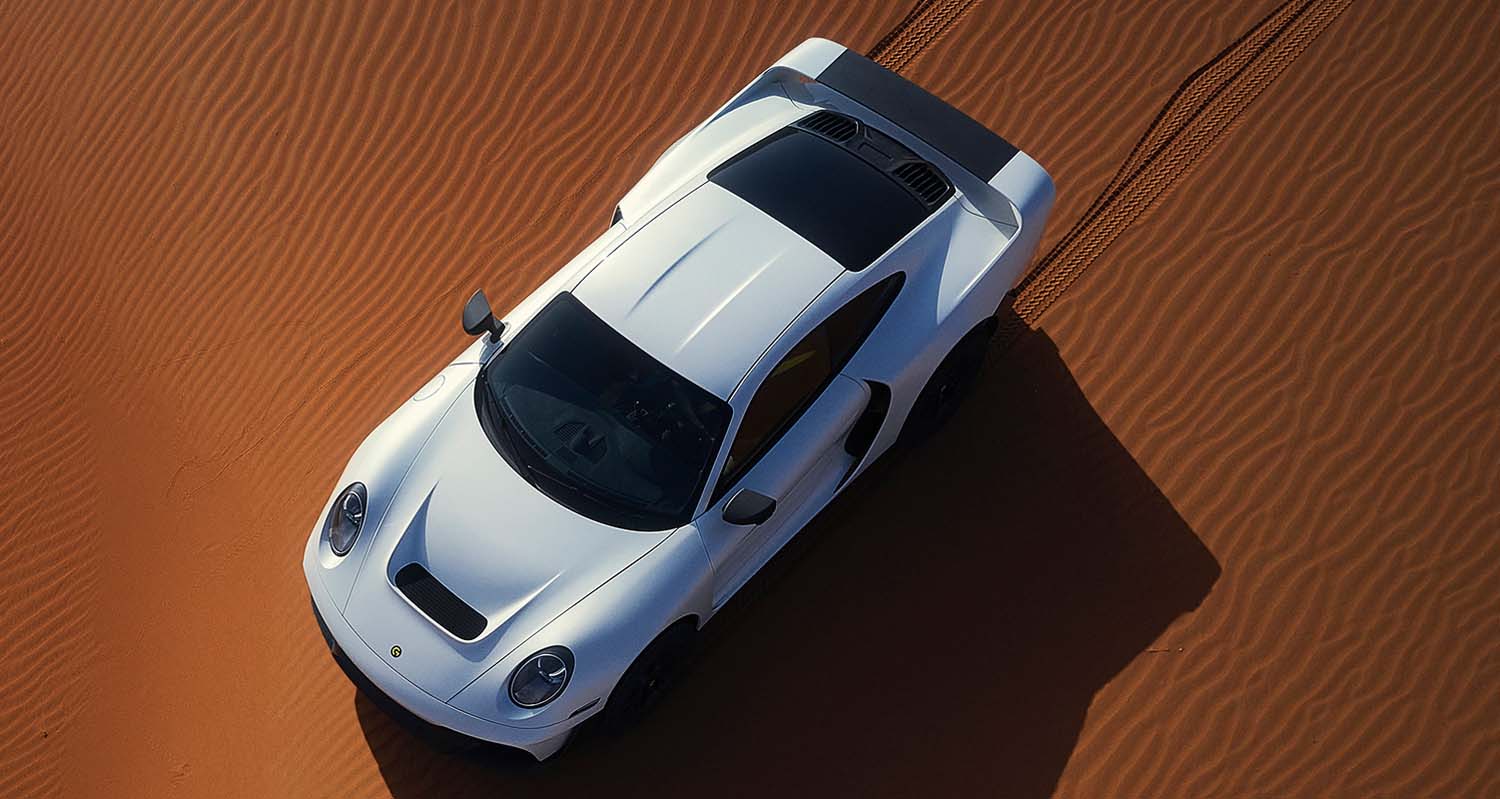 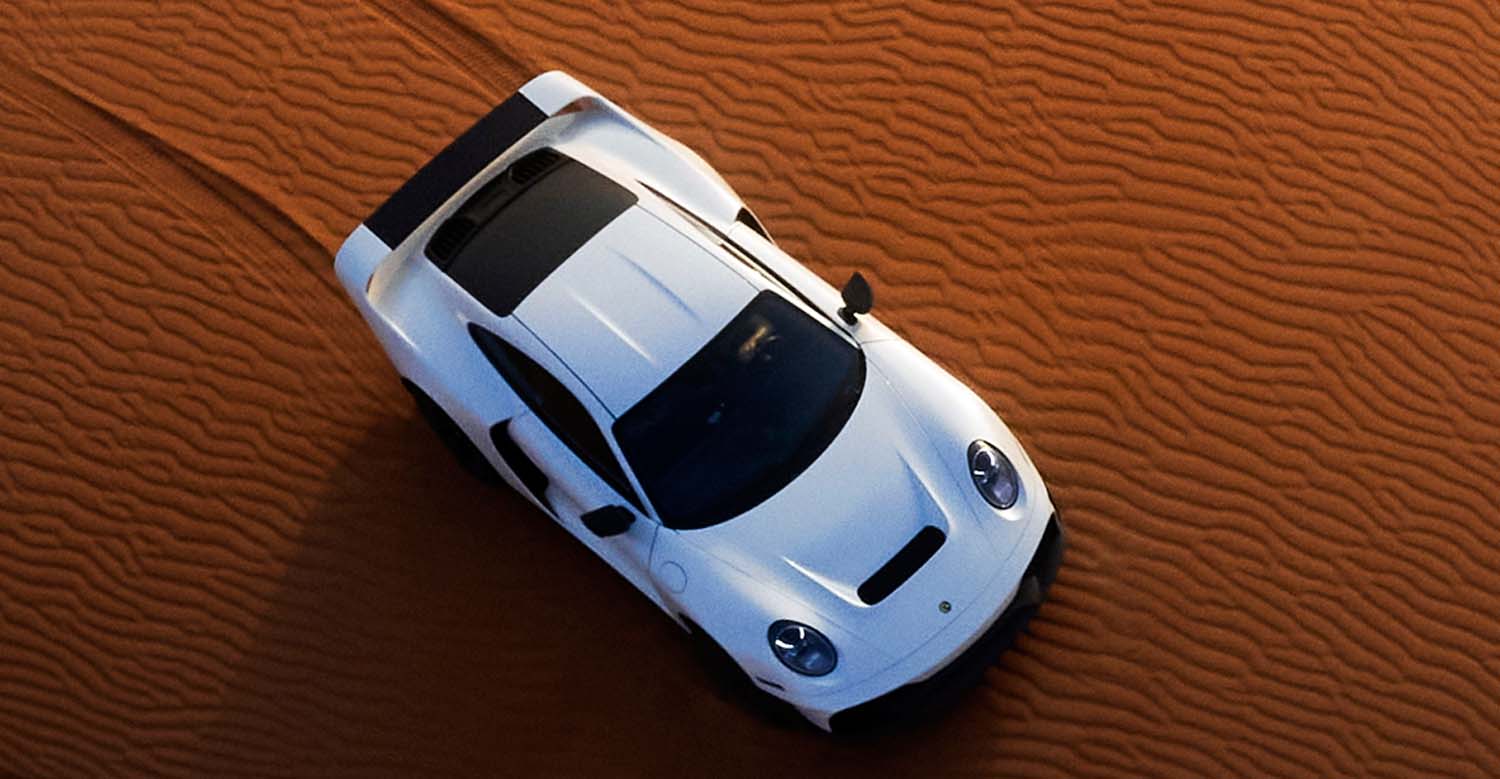 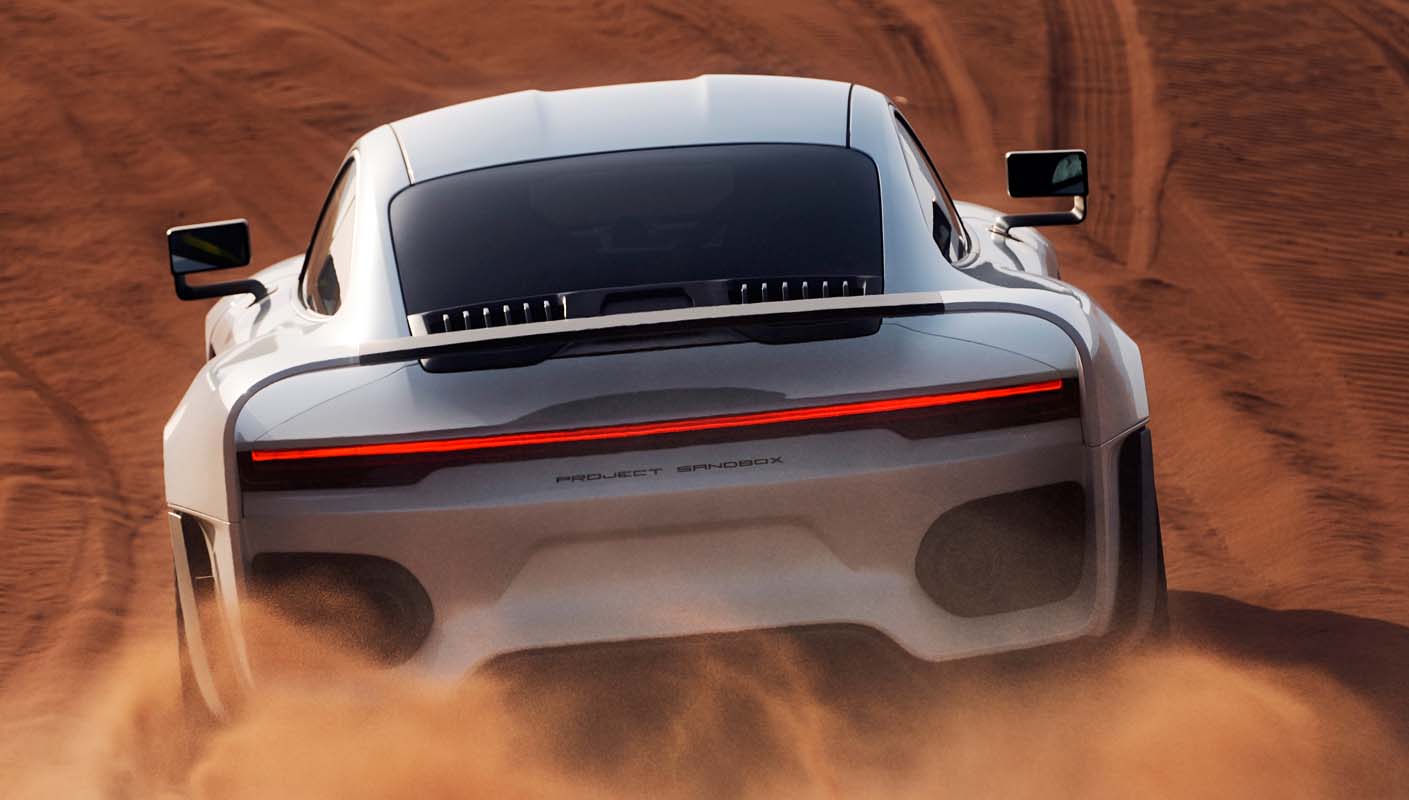 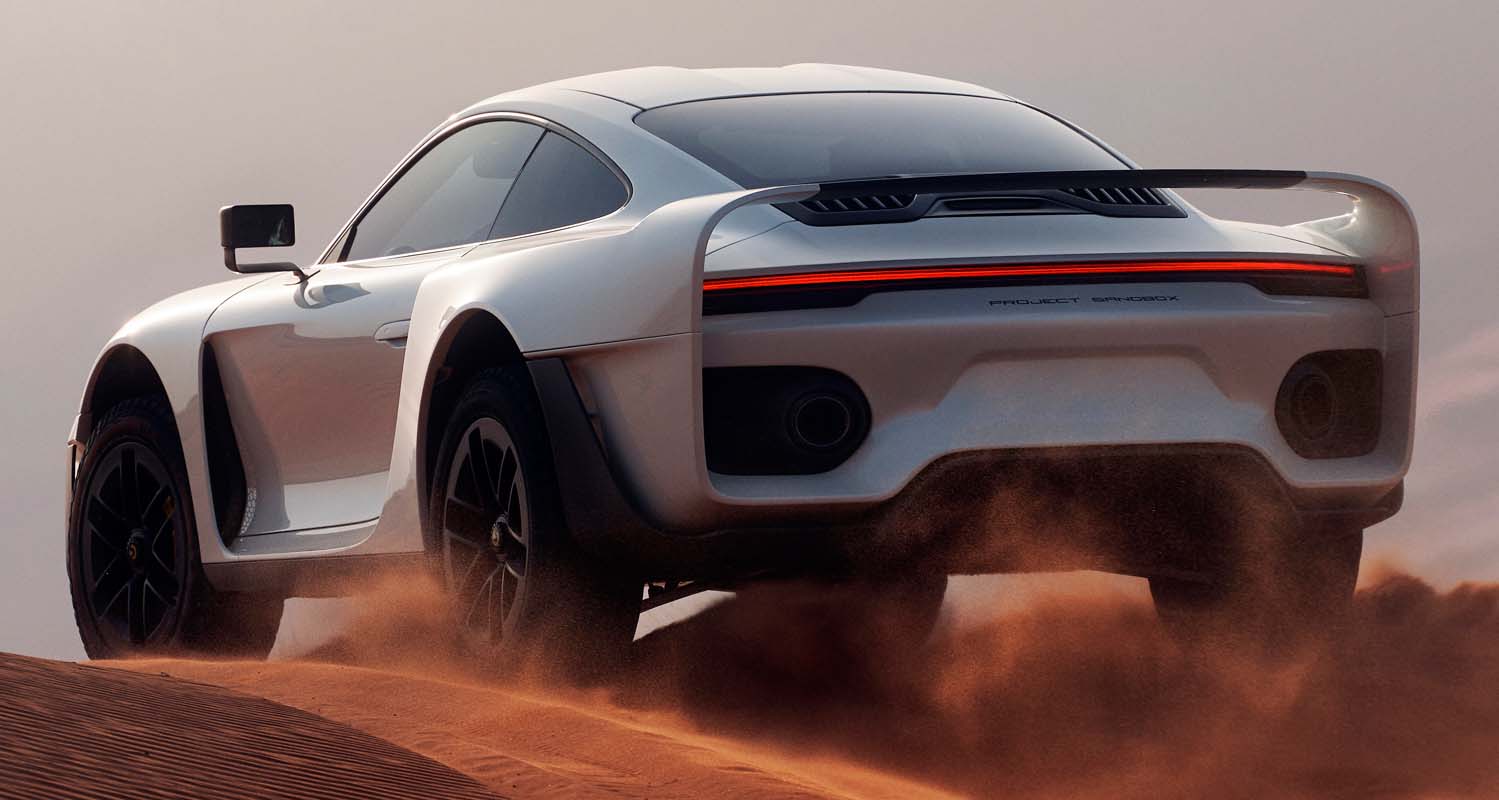 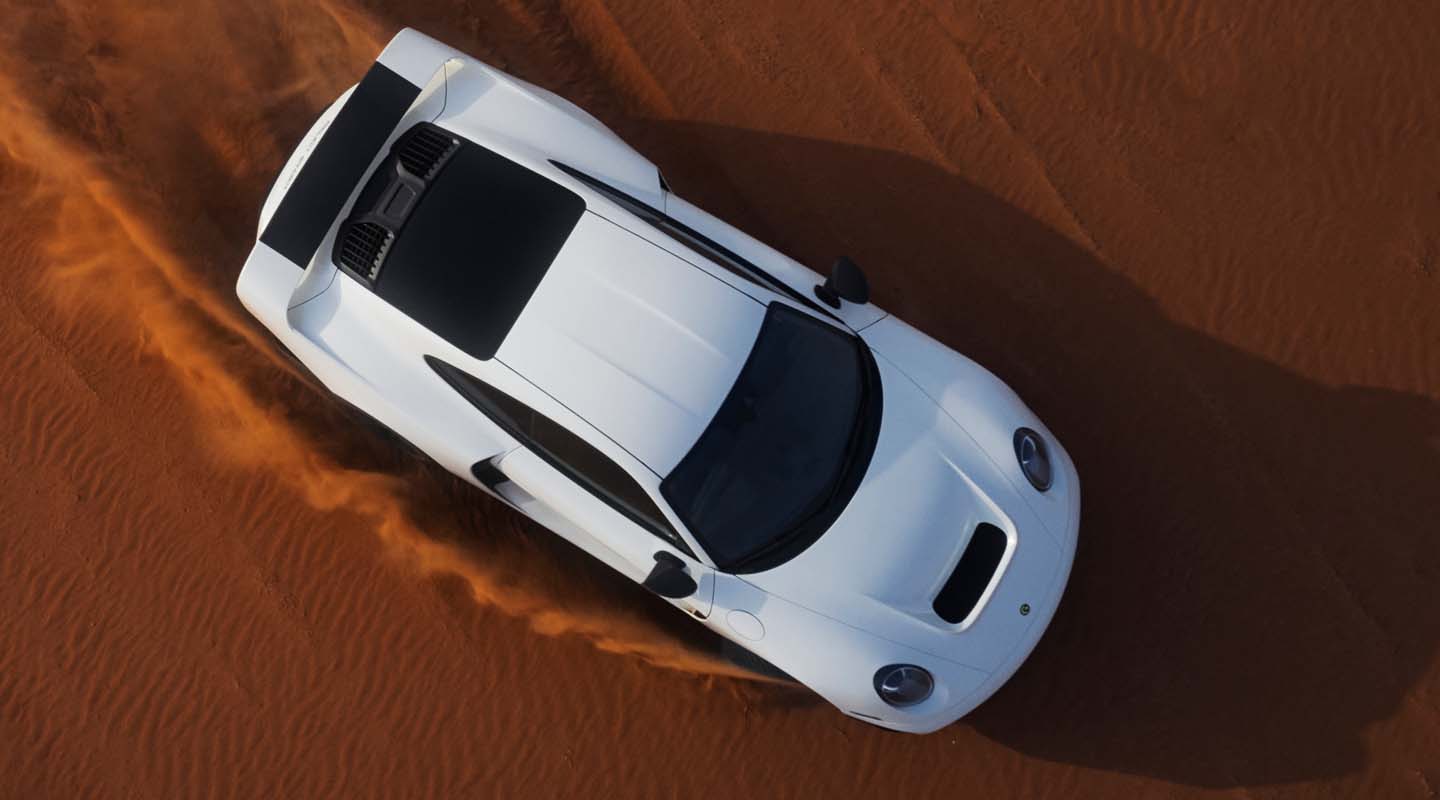 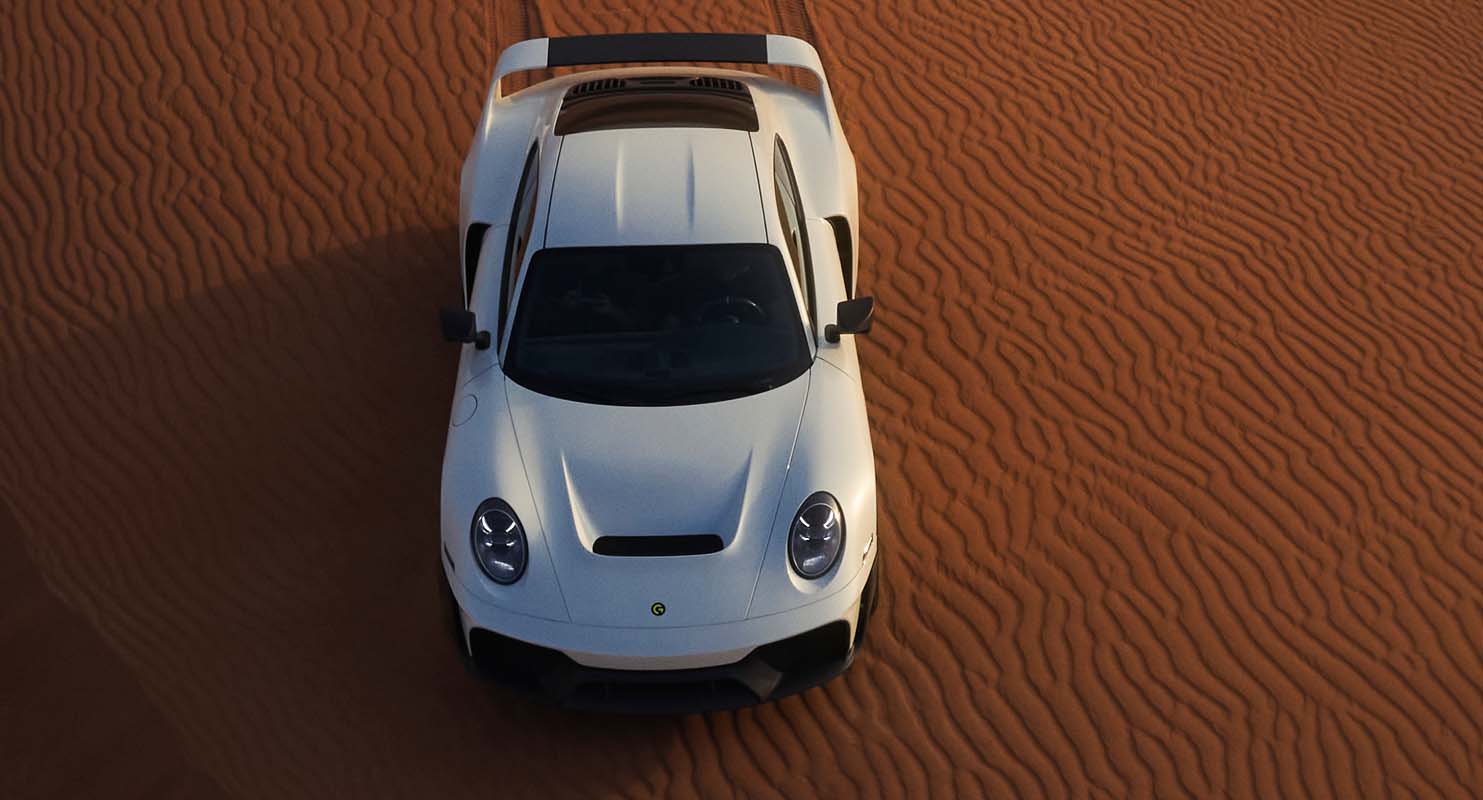 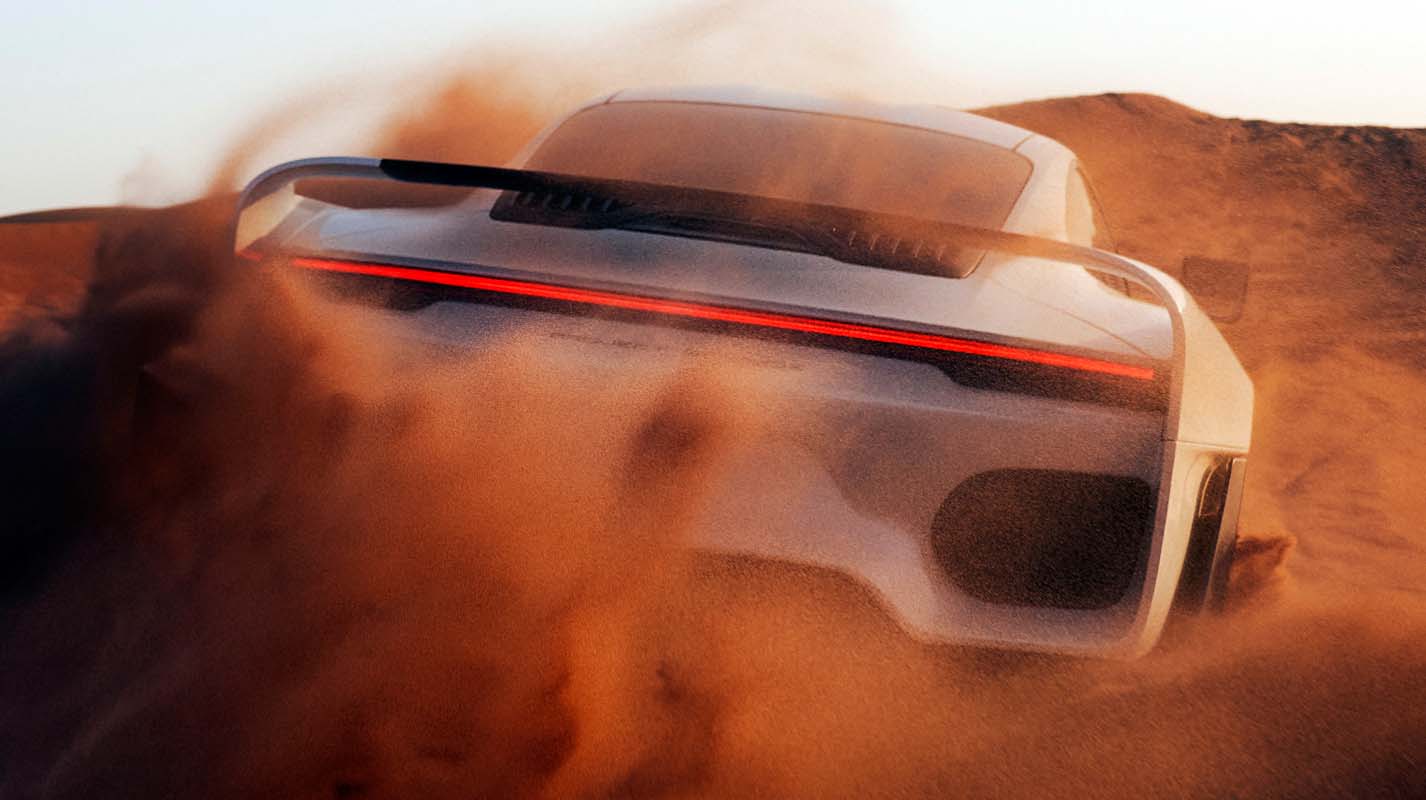 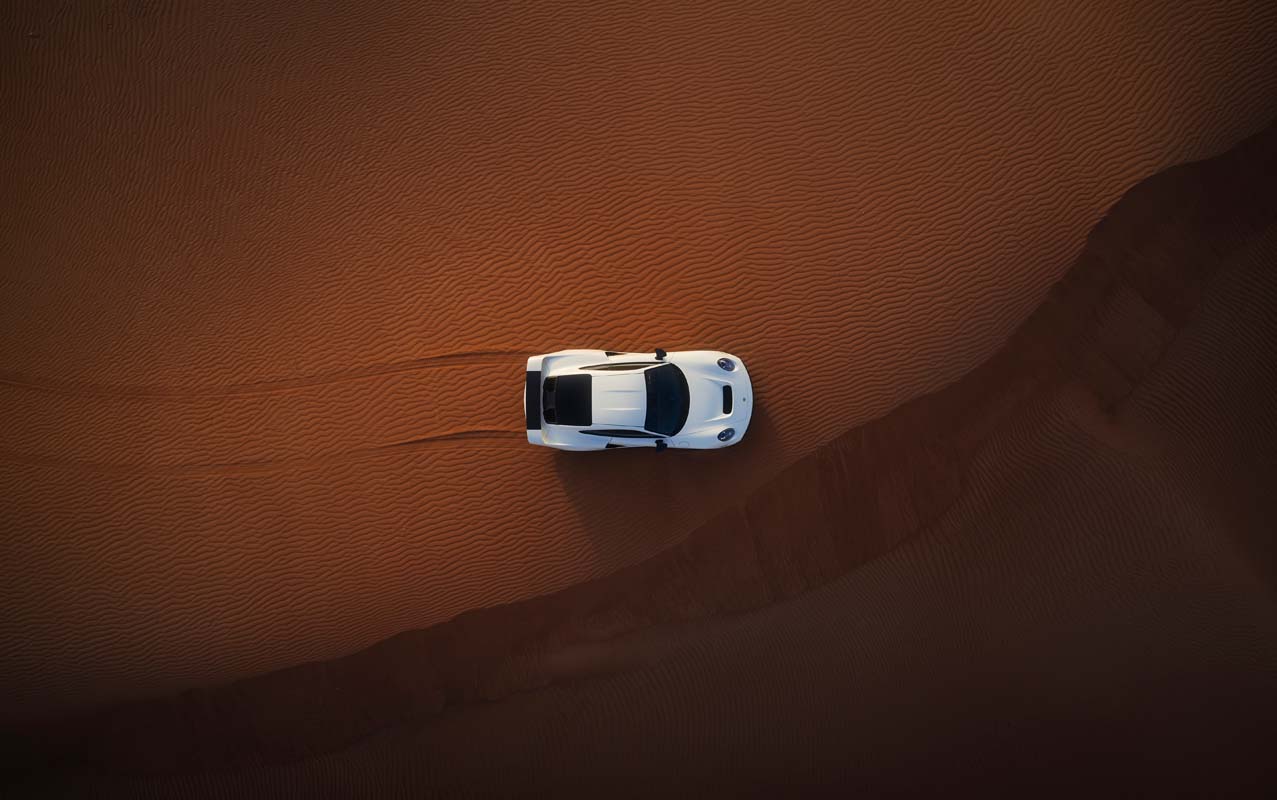 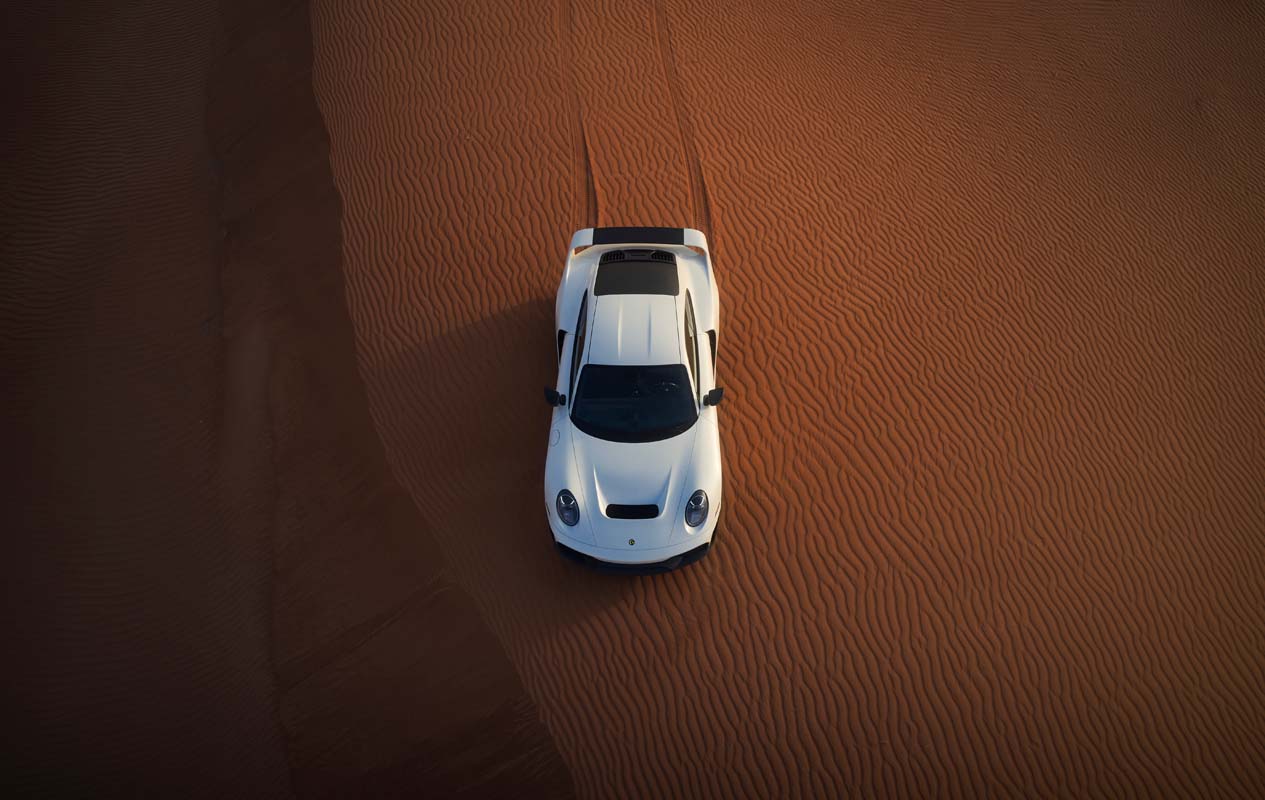 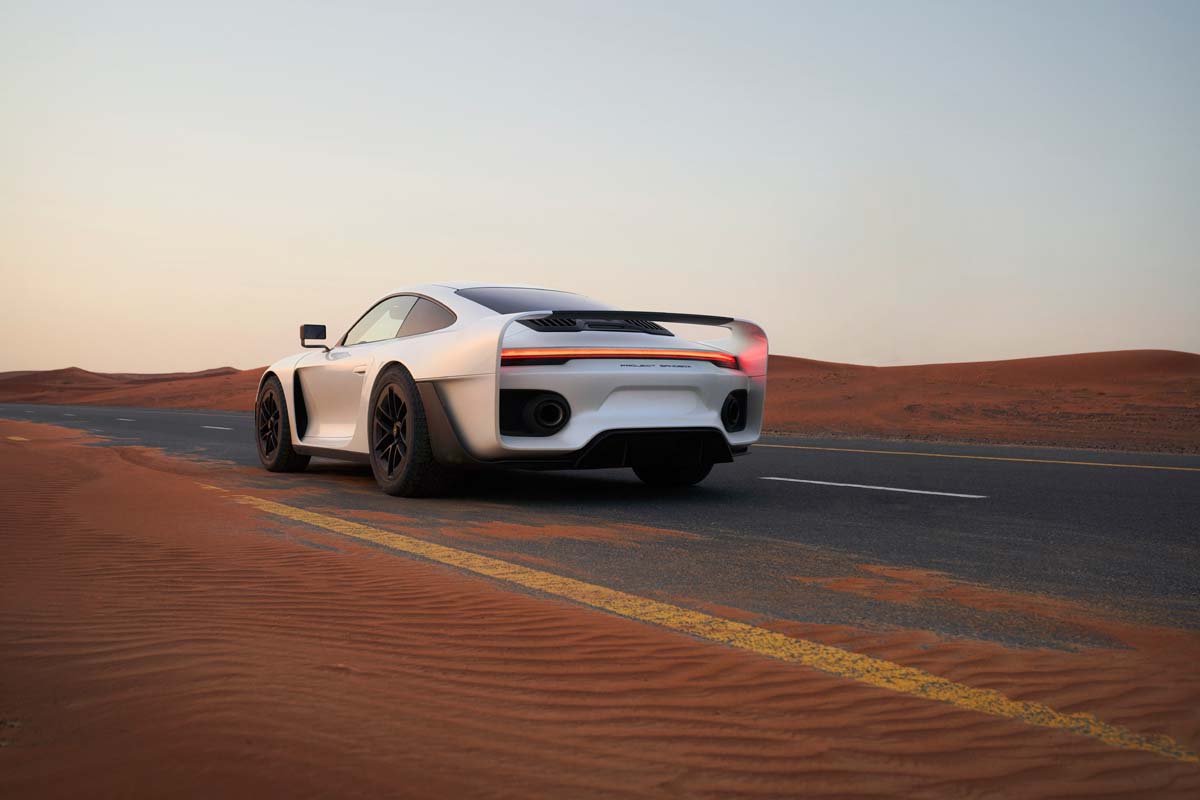 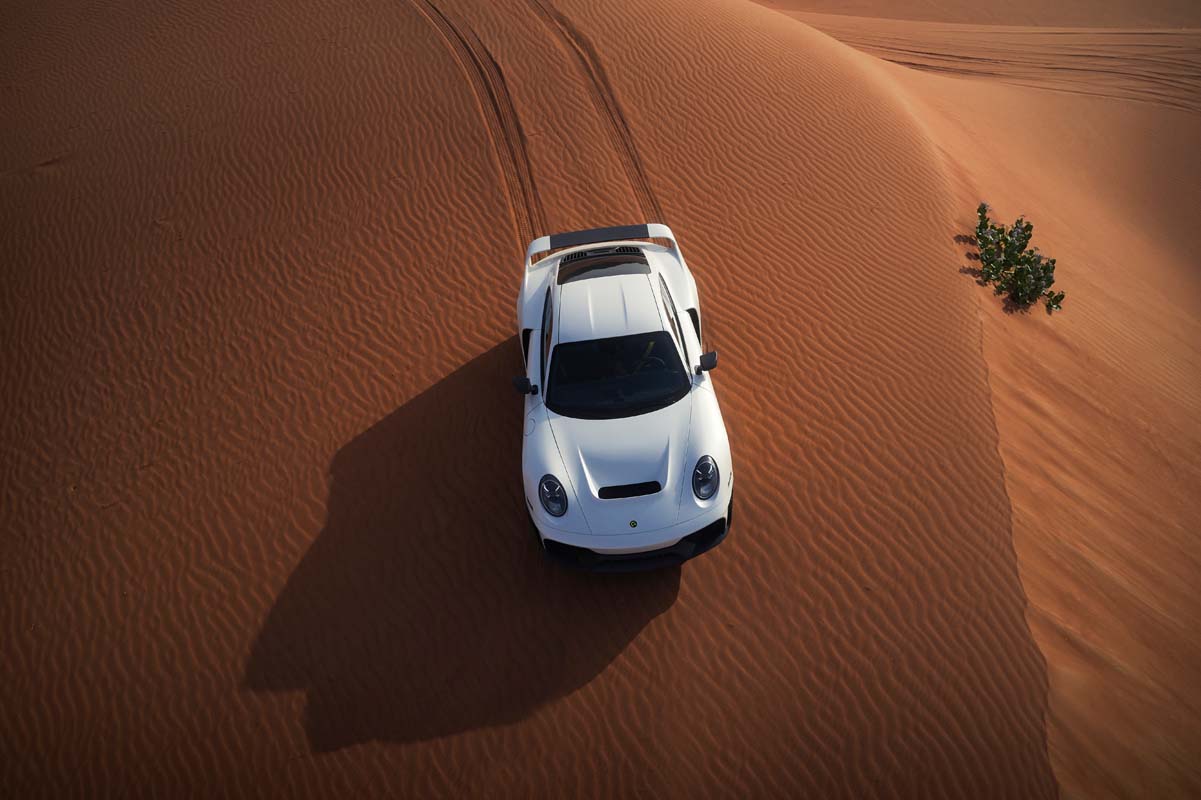 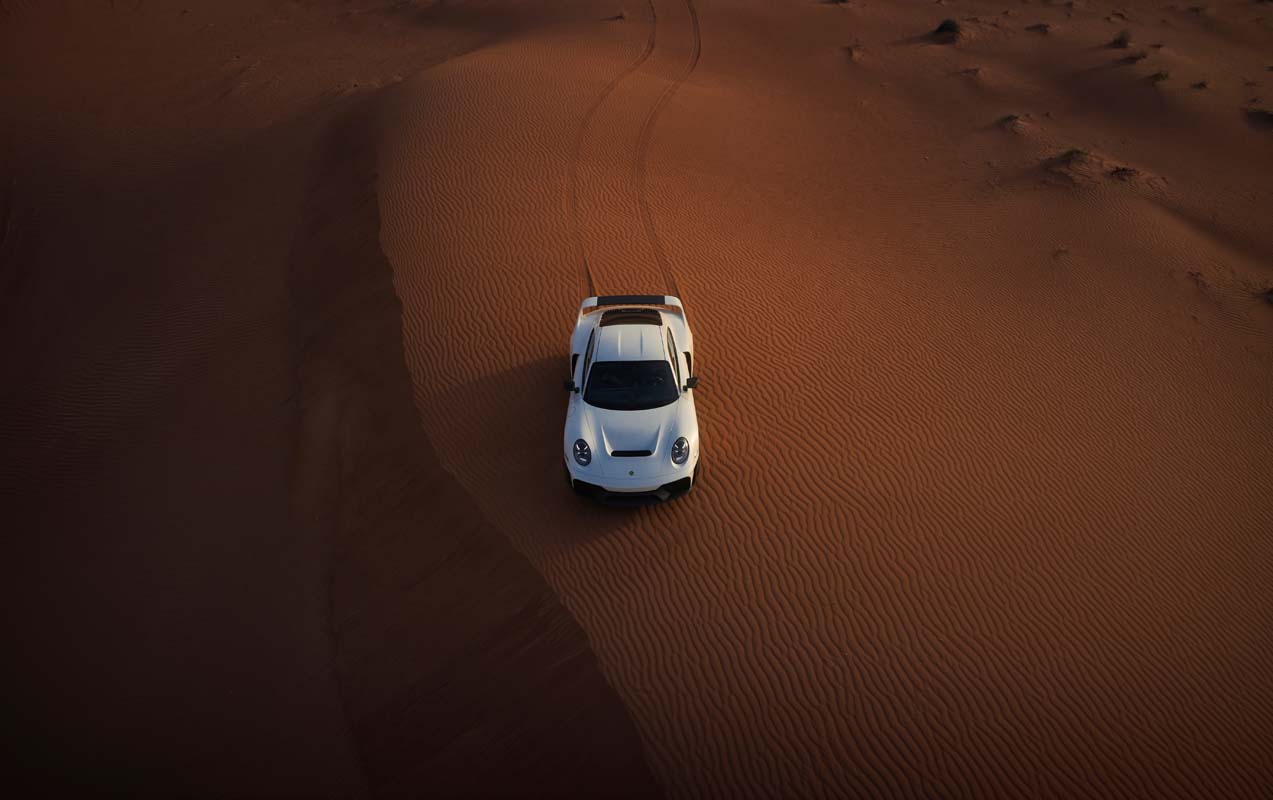 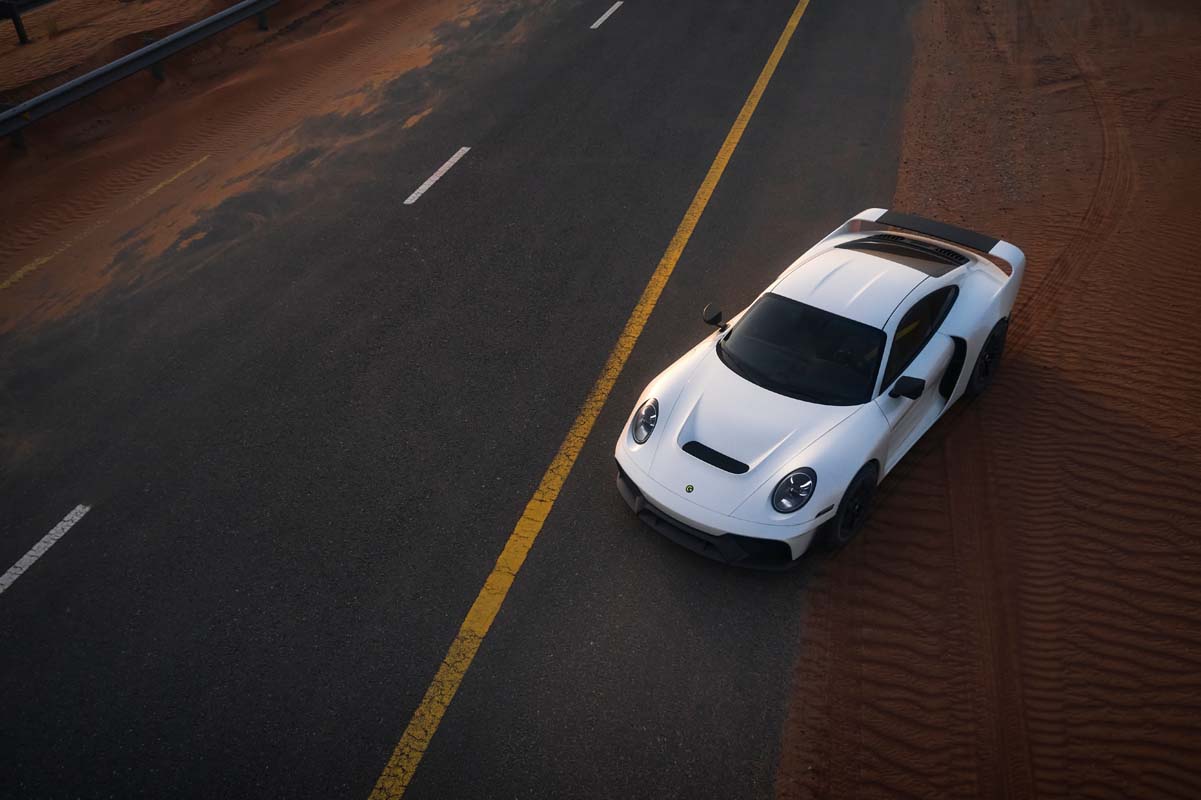 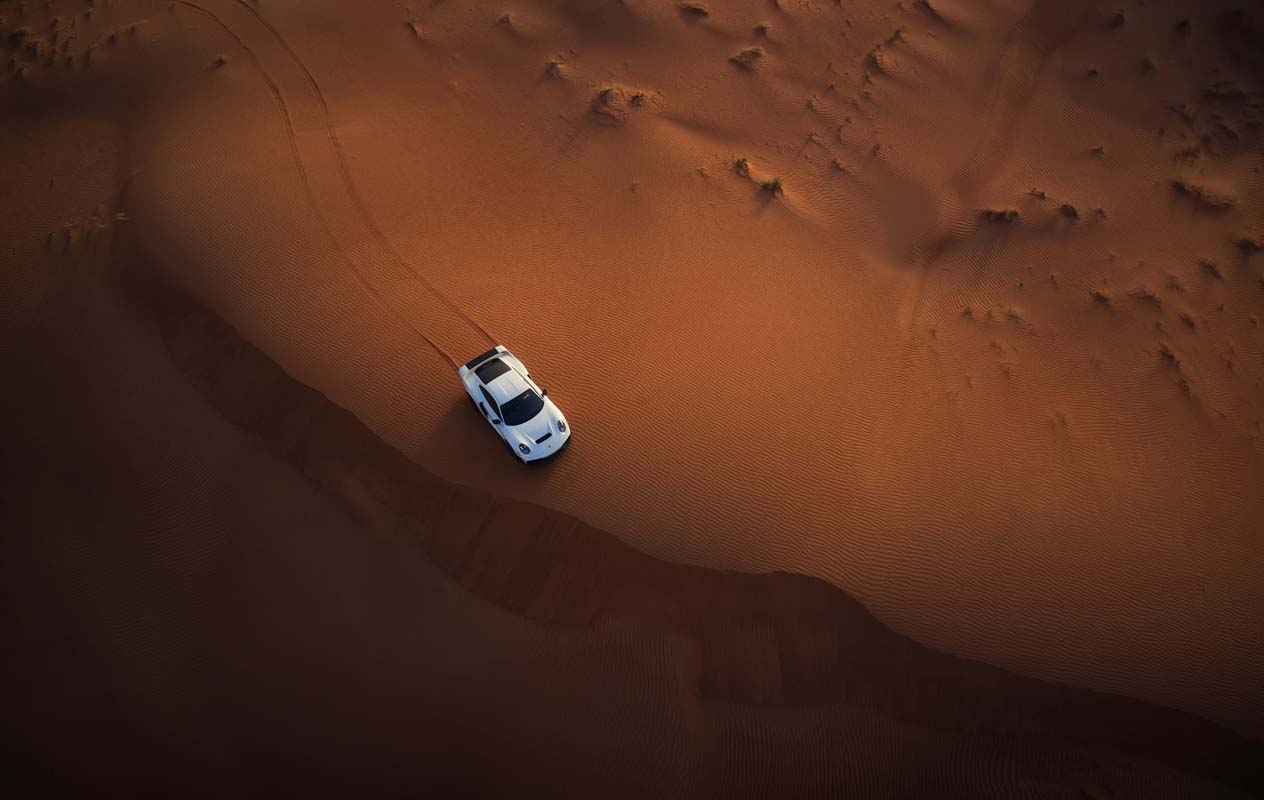 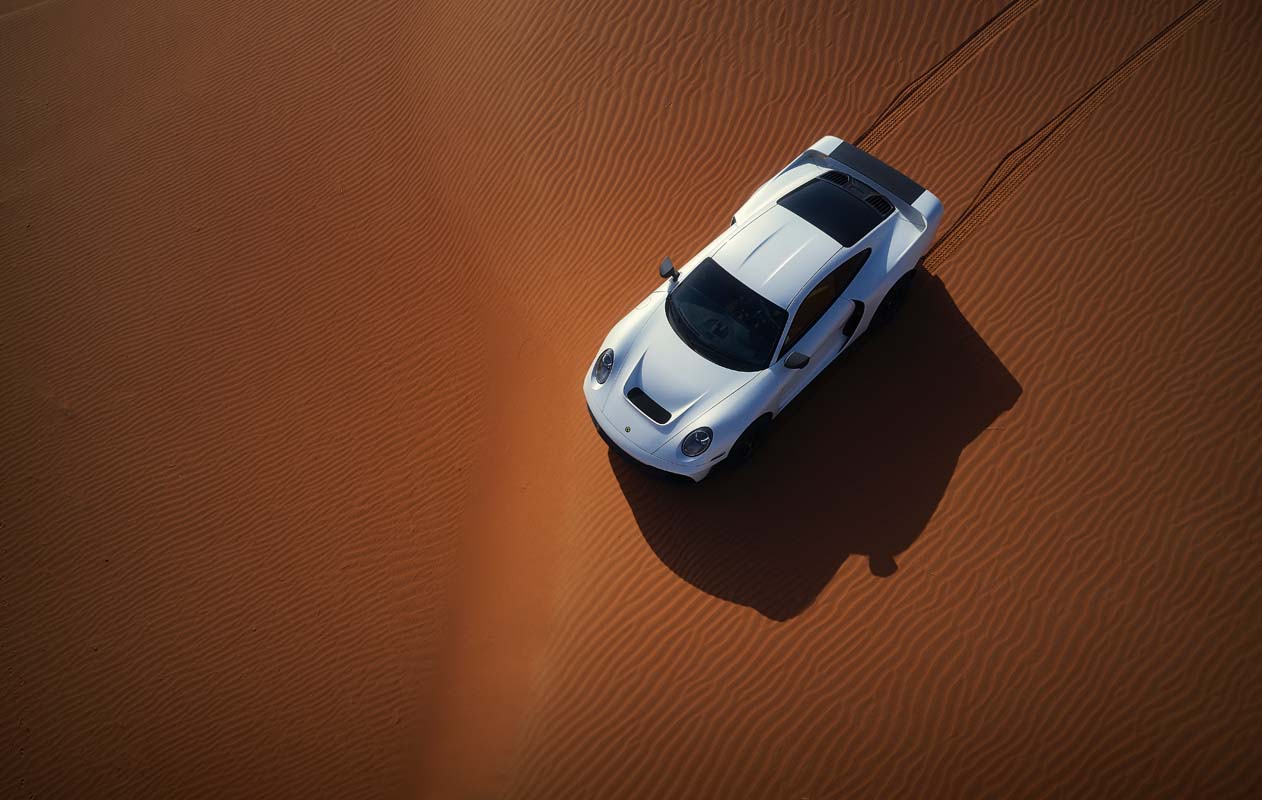 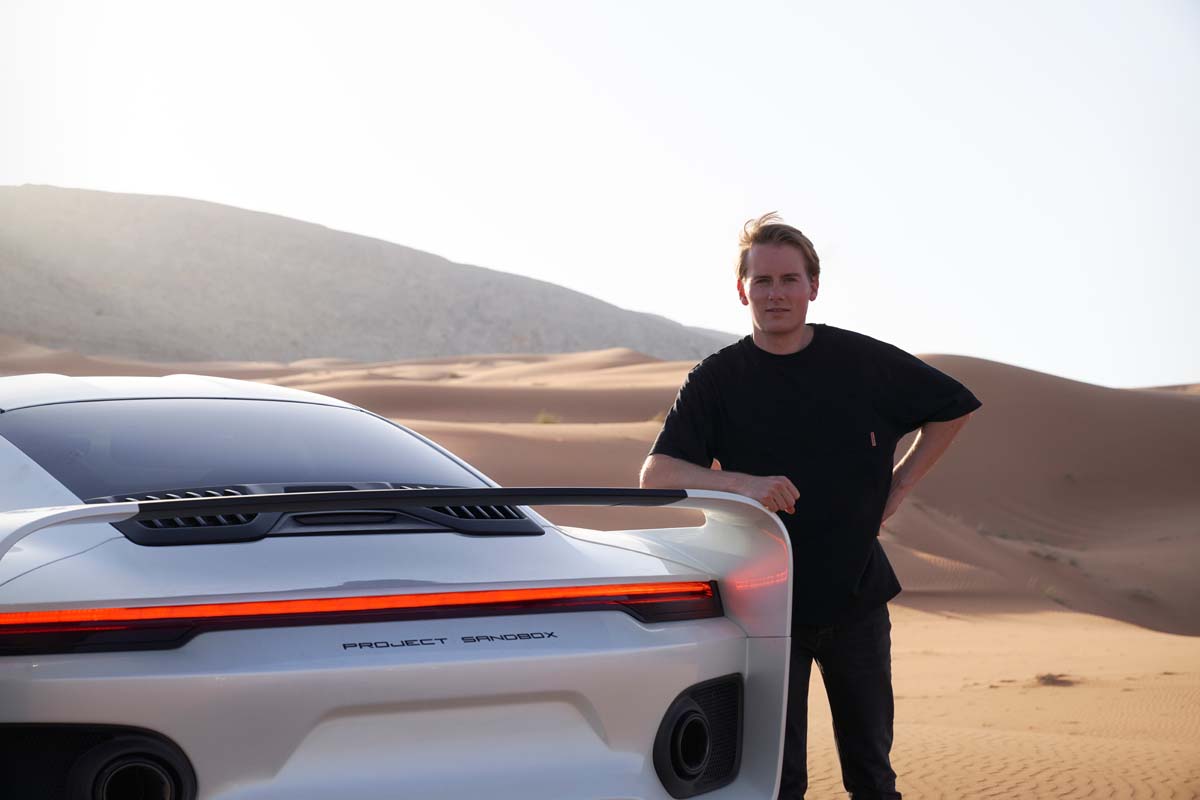 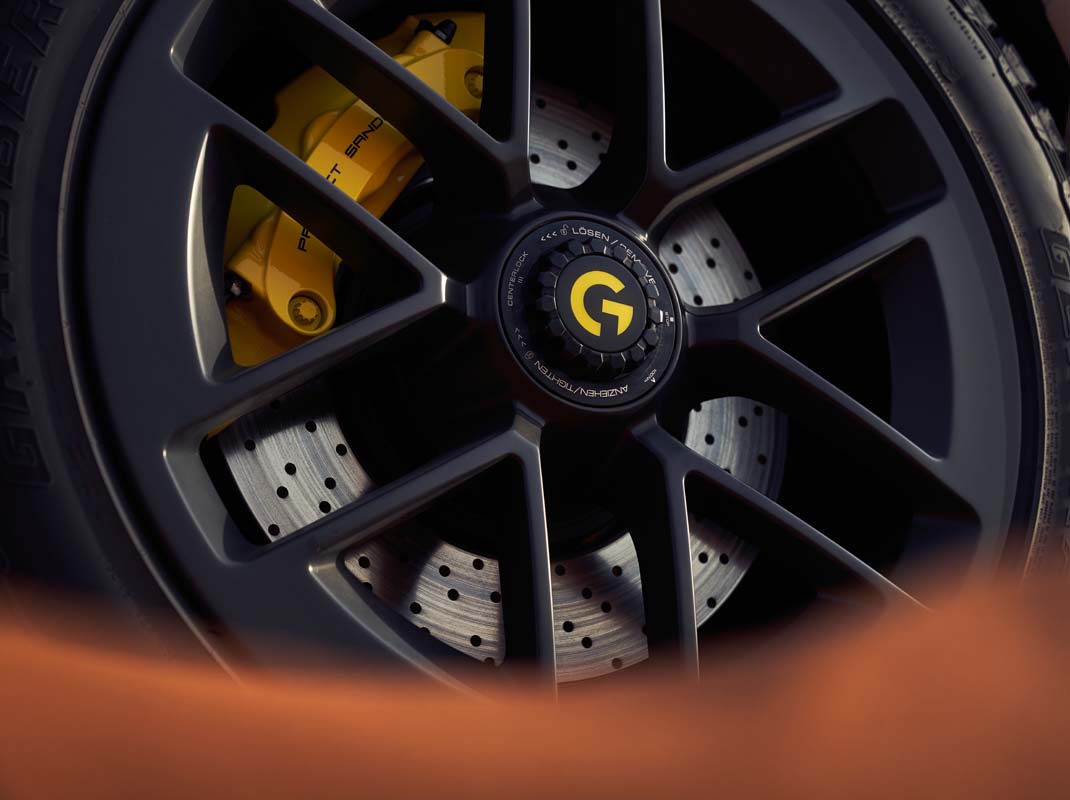 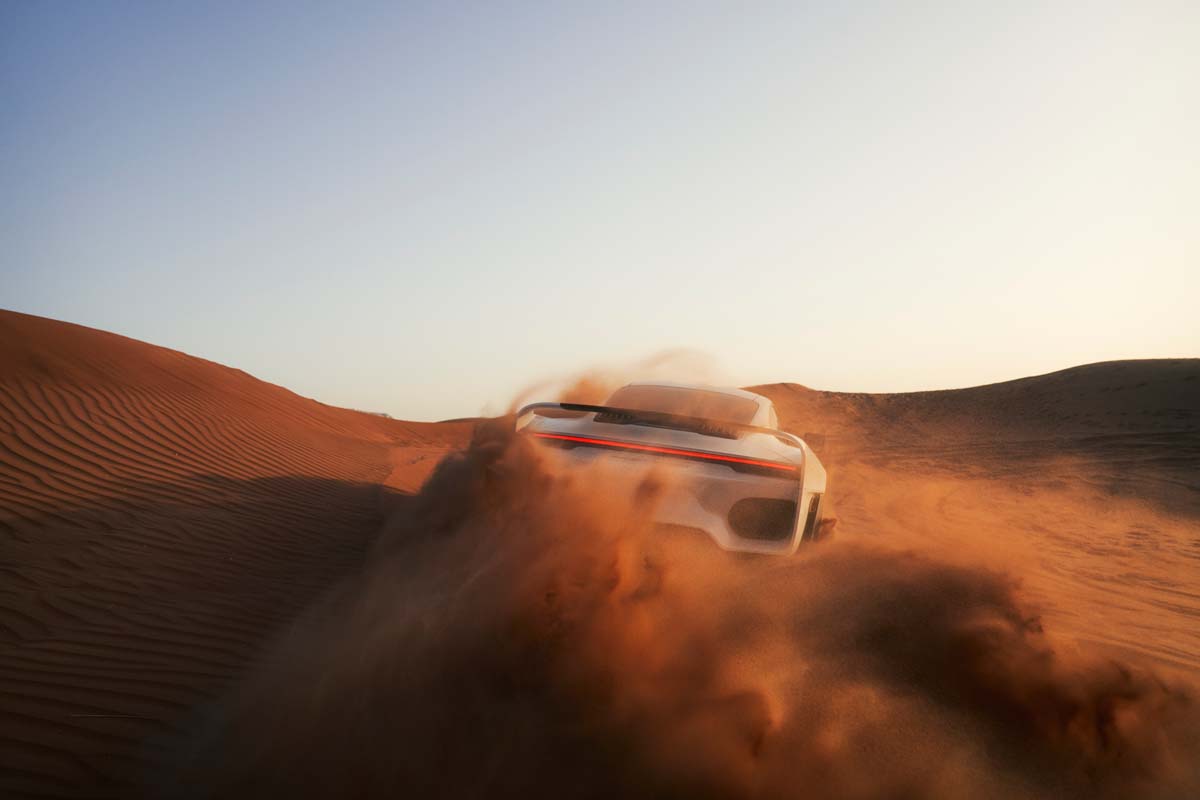 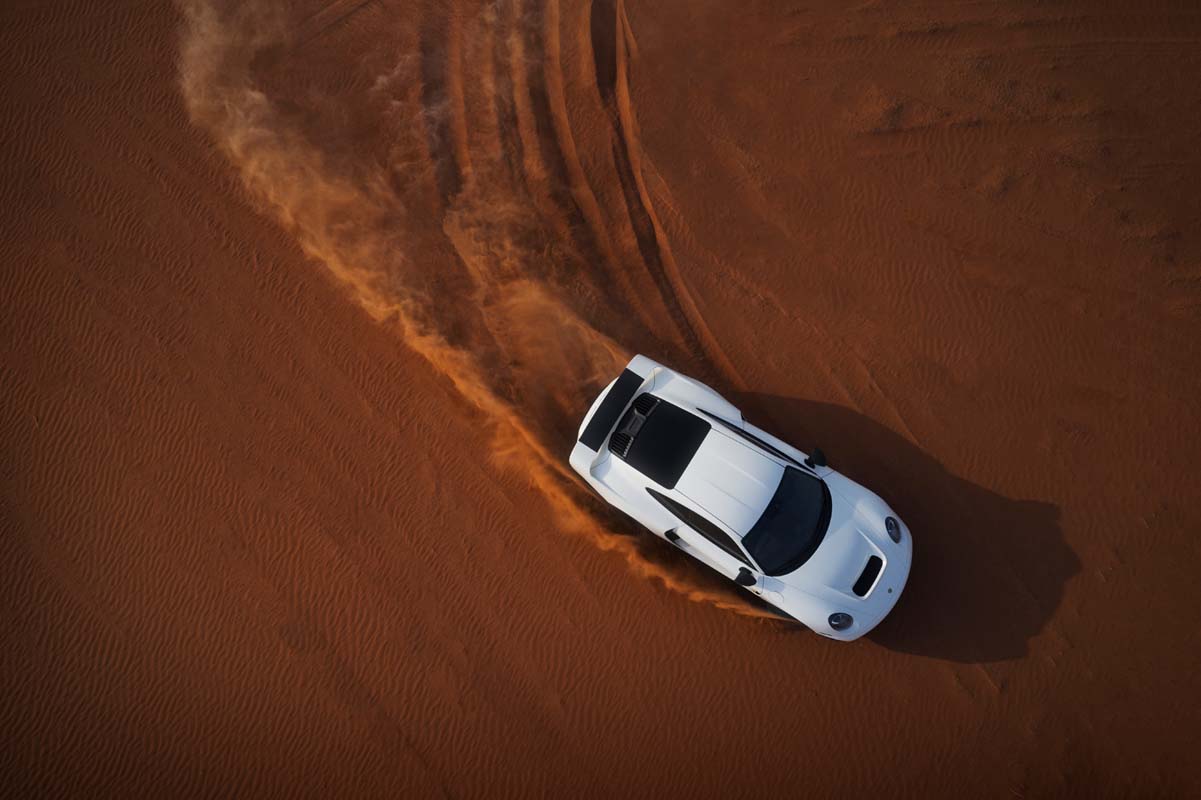 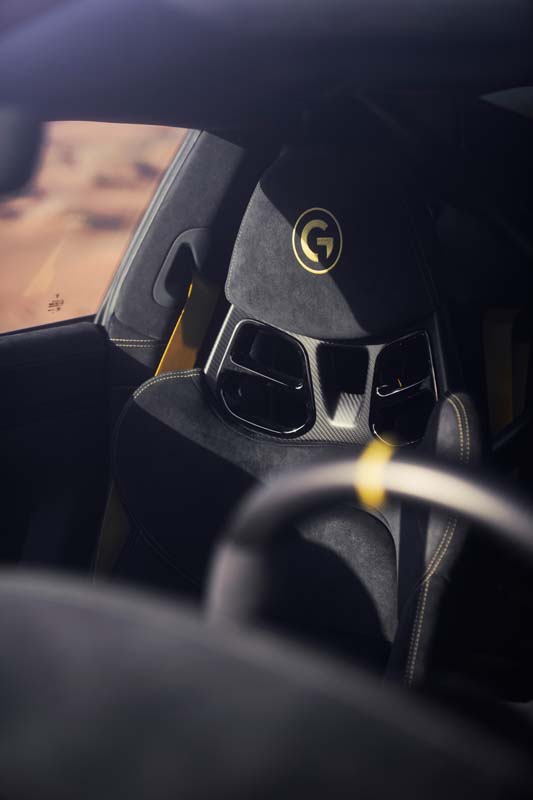 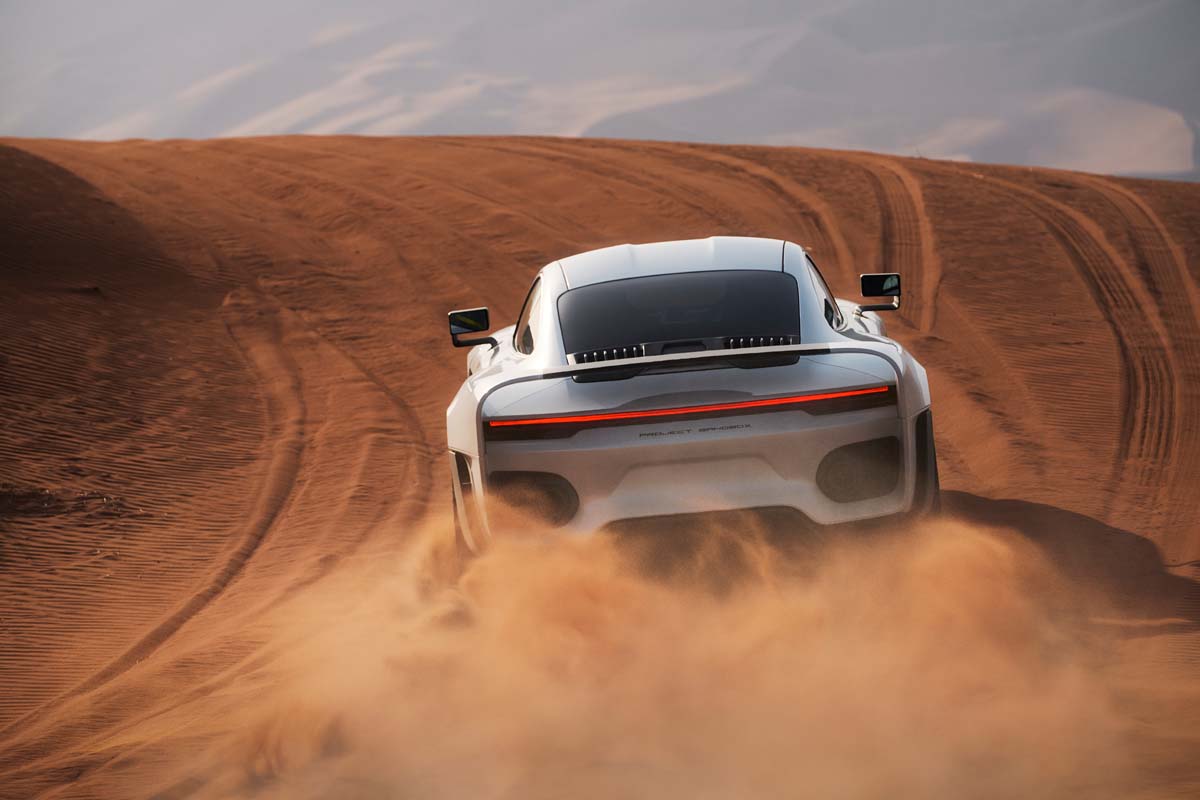 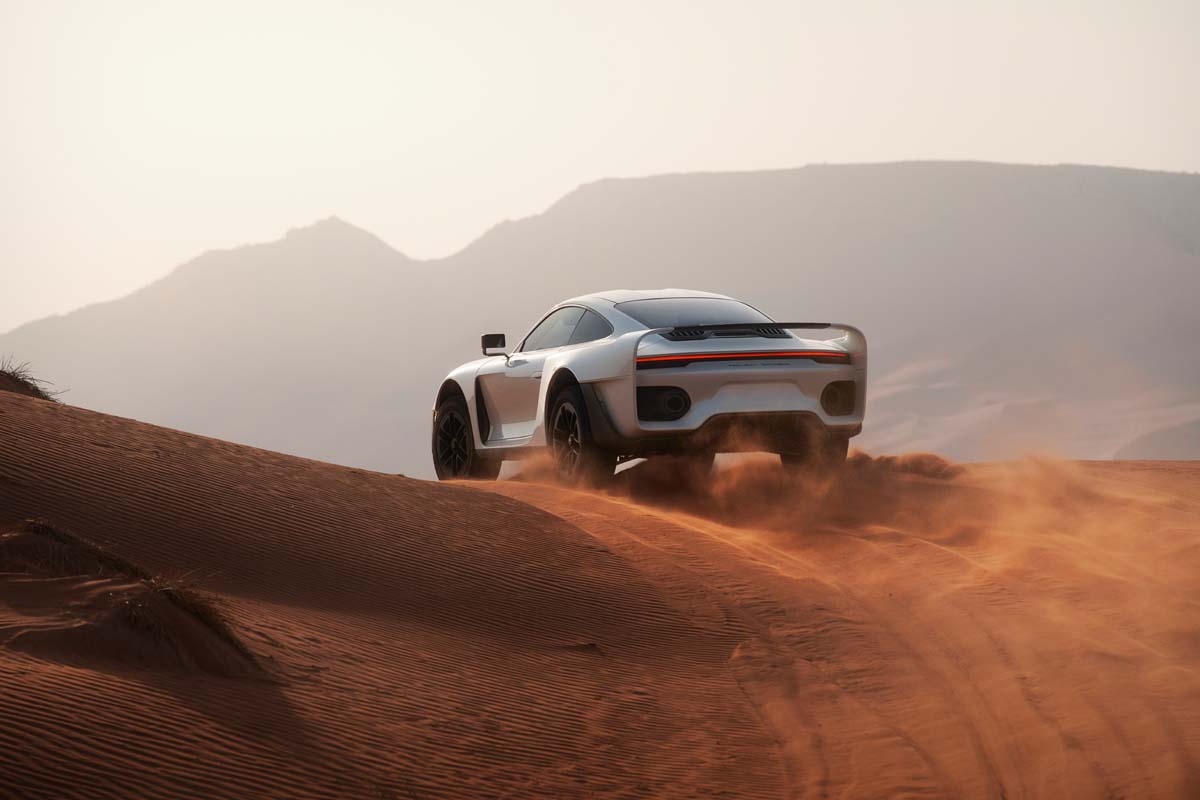 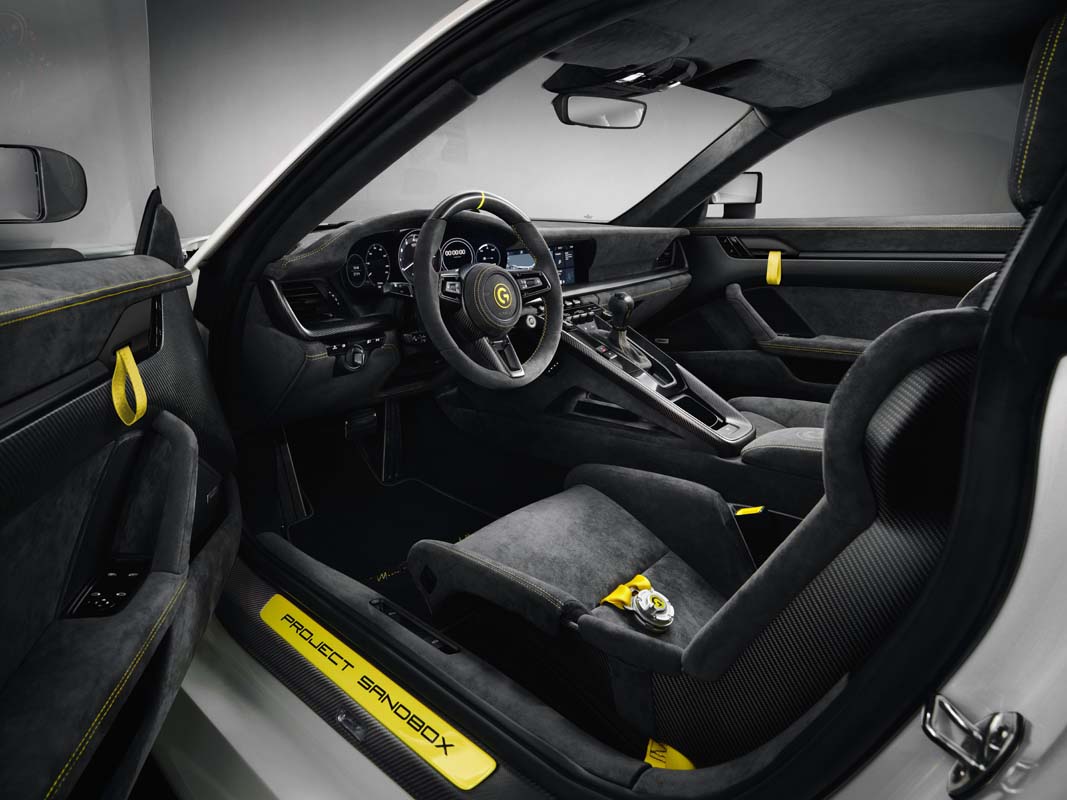 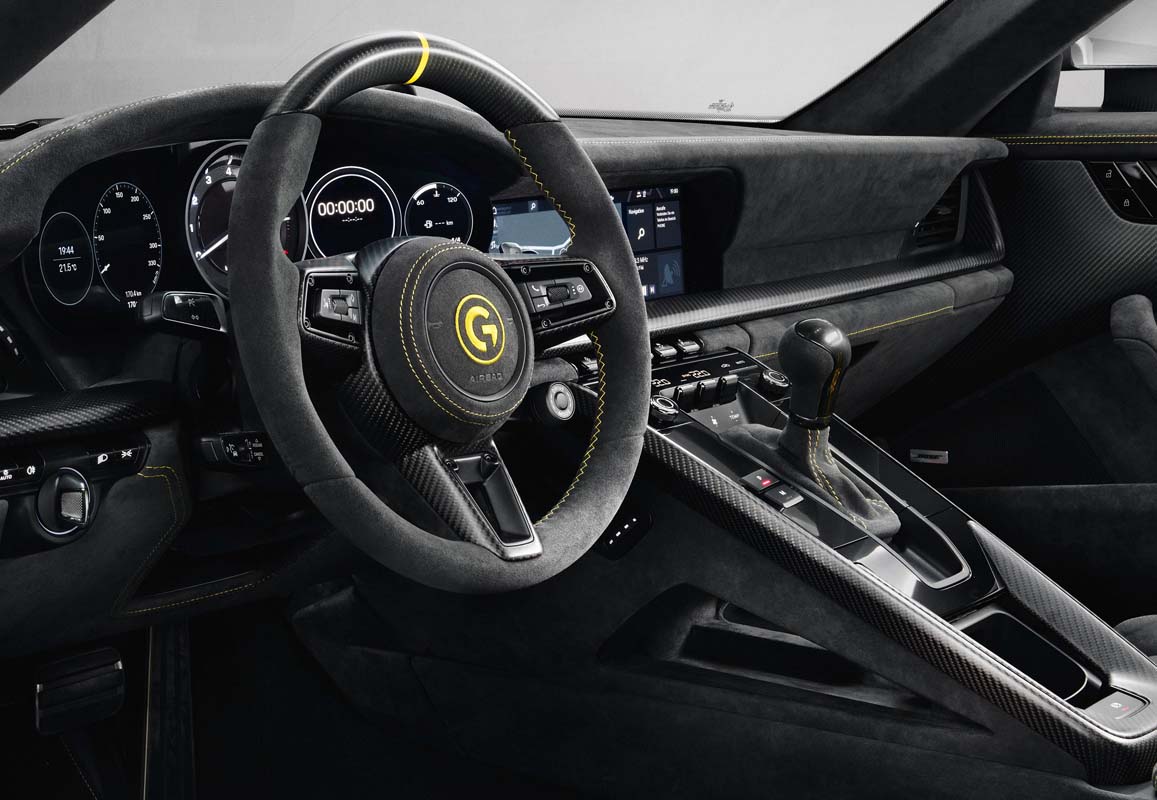