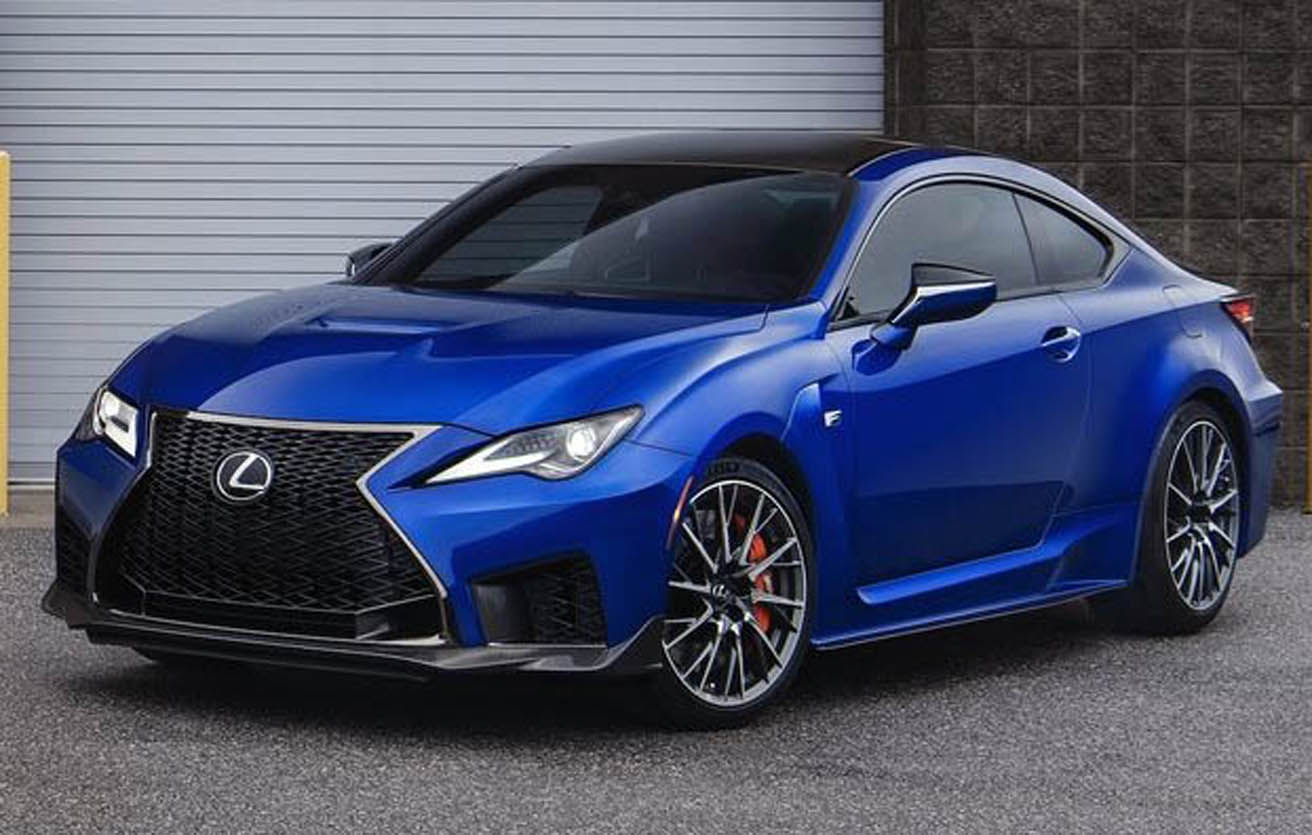 Freshly updated for the 2020 model year, the Lexus RC F coupe now boasts improved performance, revised styling and an all-new, limited production Track Edition. With the introduction of the RC F Track Edition, hard core driving enthusiasts no longer have to decide between a luxury car for the street and a serious performance car for the track. Blending the luxury and craftsmanship of Lexus with performance upgrades typically reserved for exotic sportscars, the Lexus RC F Track Edition is capable of turning hot laps all afternoon and being driven home that night. It’s the latest milestone for the F performance brand that will continue to evolve as an important pillar of the overall strategy at Lexus.

The Track Edition joins the standard Lexus RC F performance coupe which has been extensively updated for the 2020 model year. Improved aerodynamics, reduced weight, a retuned suspension and enhanced styling elevate the Lexus RC F to a new level of performance and refinement.

“The new RCF and the Track Edition, in particular, benefit from constant development since their original launch. With the latest improvements, these models help further distinguish the F brand by offering fast, durable, highly capable performance cars that rely on a range of technologies to help make their performance accessible to drivers of all skill levels,” said Koji Sato, Executive Vice President, Lexus International.

The 2020 Lexus RC F coupe gets a wide range of changes designed to boost its performance and freshen its overall look. One of the first targets for the engineers was reducing weight without compromising the coupe’s sense of refinement and solidity. At the rear, hollow half shafts are now used in place of the previous solid shafts while up front a pared down intake manifold and a smaller air conditioning compressor remove weight from the front of the car. Changing to aluminum for the toe control brackets and upper suspension support brackets also reduces weight while maintaining stiffness.

To further refine the feel of the RC F, there are now stiffer bushings for the rear suspension arms and steering rack mounts. More rigid engine mounts were also used to better transmit the power of the RC F’s normally aspirated 5.0-liter V8, one of the last such engines available in a luxury coupe. It’s now rated at 472 horsepower (+5hp) and 395 pound feet of torque (+6 lb ft) thanks to a revised intake routing and lower rpm trigger point for the secondary intake opening (2,800 rpm vs 3,600rpm). An eight-speed automatic transmission carries over, but a higher final drive ratio (3.13 vs 2.93) has been installed to improve off-the-line response.

For the ultimate in standing start acceleration, the Lexus RC F now includes electronic launch control as standard. With a push of the button on the console, the system automatically adjusts the traction and throttle control for maximum acceleration from a stop. All the driver has to do is press and hold the brake pedal, engage the system, floor the accelerator to bring up the engine speed and release the brake.

There are also subtle but substantive changes to the styling of the RC F that add familial traits to further refine its aggressive overall shape. Up front, the headlights have been updated to a design that features stacked LED lights and integrated daytime running lights. The shape of the signature grille has been altered by adding a lower lip opening that stretches across the bottom to create a visually shorter front fascia. At the rear of the car, new taillights integrate neatly into a reshaped bumper to give the Lexus RC F a cleaner, more chiseled appearance. 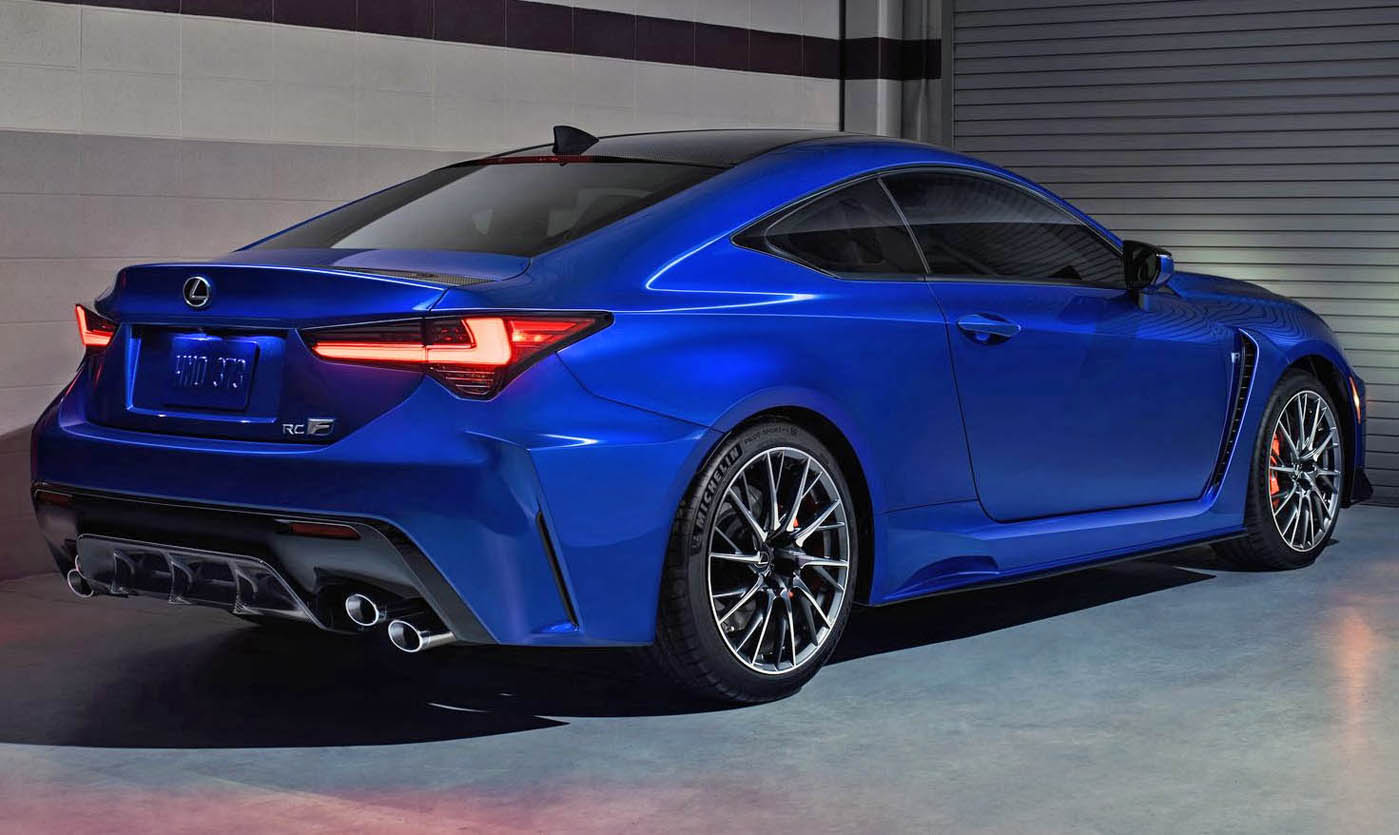 More than a mere accessories package, the limited production Lexus RC F Track Edition features a precisely engineered set of upgrades that work together seamlessly to push its performance to a new level. Developed with input from Lexus race teams in the Super GT and IMSA series, the Track Edition is designed to deliver exceptional performance that enthusiasts can easily exploit in a wide variety of conditions.

Achieving that level of predictable performance was made possible by rigorous engineering and the assembly precision of Takumi masters who oversee production of every Lexus RC F. All aspects of the car were scrutinized for improvement, but the Track Edition doesn’t forego refinement for all-out speed. It remains an uncompromised luxury performance coupe with the ability to impress both on the track and off.

A Smoother Shape and a Precise Diet

One key area of improvement is the RC F Track Edition’s aerodynamic signature. Up front, the unique front splitter with canards is not only made from carbon fiber to reduce weight, it’s also designed to increase front end downforce for better grip and more precise steering. At the rear of the car, a fixed rear wing made from carbon fiber replaces the active spoiler offered on the standard RC F. The fixed wing is not only lighter, it does double duty by simultaneously reducing drag and adding downforce.

To accomplish that paradoxical feat, the engineers started by shaping the wing in a way that smooths the airflow over the rear of the car to decrease drag-inducing turbulence. They then added a very slight angle of attack to produce downforce without compromising the overall airflow. The result is up to 58 pounds of additional downforce compared to the active rear spoiler.

Like the standard model, weight reduction was a key area of focus for the Track Edition. Preliminary estimates put the total reduction at 176 pounds compared to the previous Lexus RC F, but more importantly, the engineers focused on cutting weight that yields the most significant dynamic improvements. This led to keying in on unsprung weight since any weight that can be removed from the mass not supported by the suspension pays huge dividends in handling and steering feel.

With that goal in mind, every Track Edition model is upgraded with Brembo carbon ceramic brake rotors. They are not only significantly lighter than their steel counterparts, they’re also better able to withstand the extreme heat cycling associated with performance driving. They are surrounded by a set of lightweight 19″ BBS forged alloy wheels that feature a design derived from the RC F GT3 race car. Between the wheels, brake rotors and calipers, the Track Edition boasts a significant 55-pound reduction in unsprung weight on the front of the car alone.

Additional weight was removed by specifying carbon fiber for the roof and hood along with switching to a carbon fiber partition behind the rear seats and a carbon bumper reinforcement. Many of these carbon fiber pieces are made on the same line that supplied the Lexus LFA during its two-year production run. A standard titanium muffler and tail pipes is yet another area where the Track Edition sheds weight. Rarely seen on production cars, the use of titanium not only reduces the overall weight of the individual parts, it gives the Track Edition a polished look along with a unique sound.

That sound is worth enhancing, too, as the Track Edition uses the same 472hp, normally aspirated 5.0-liter V8 found in every 2020 Lexus RC F. In fact, when combined with the Track Edition’s reduced curb weight, this RC F has the best power-to-weight ratio among its competitors. Couple that with the new electronic launch control system, and the RC F Track Edition is capable of launching from 0-to-60 mph in 3.96 seconds.

In order to give the Track Edition a more exclusive look on the inside, a red leather interior comes standard along with Alcantara seat accents and red carbon trim on the doors and dashboard. Only two exterior colors will be available: Ultra White and Matte Nebula Gray, an exclusive color only available on the Track Edition.

Both the 2020 Lexus RC F and the RC F Track Edition started production in the second quarter of 2019. 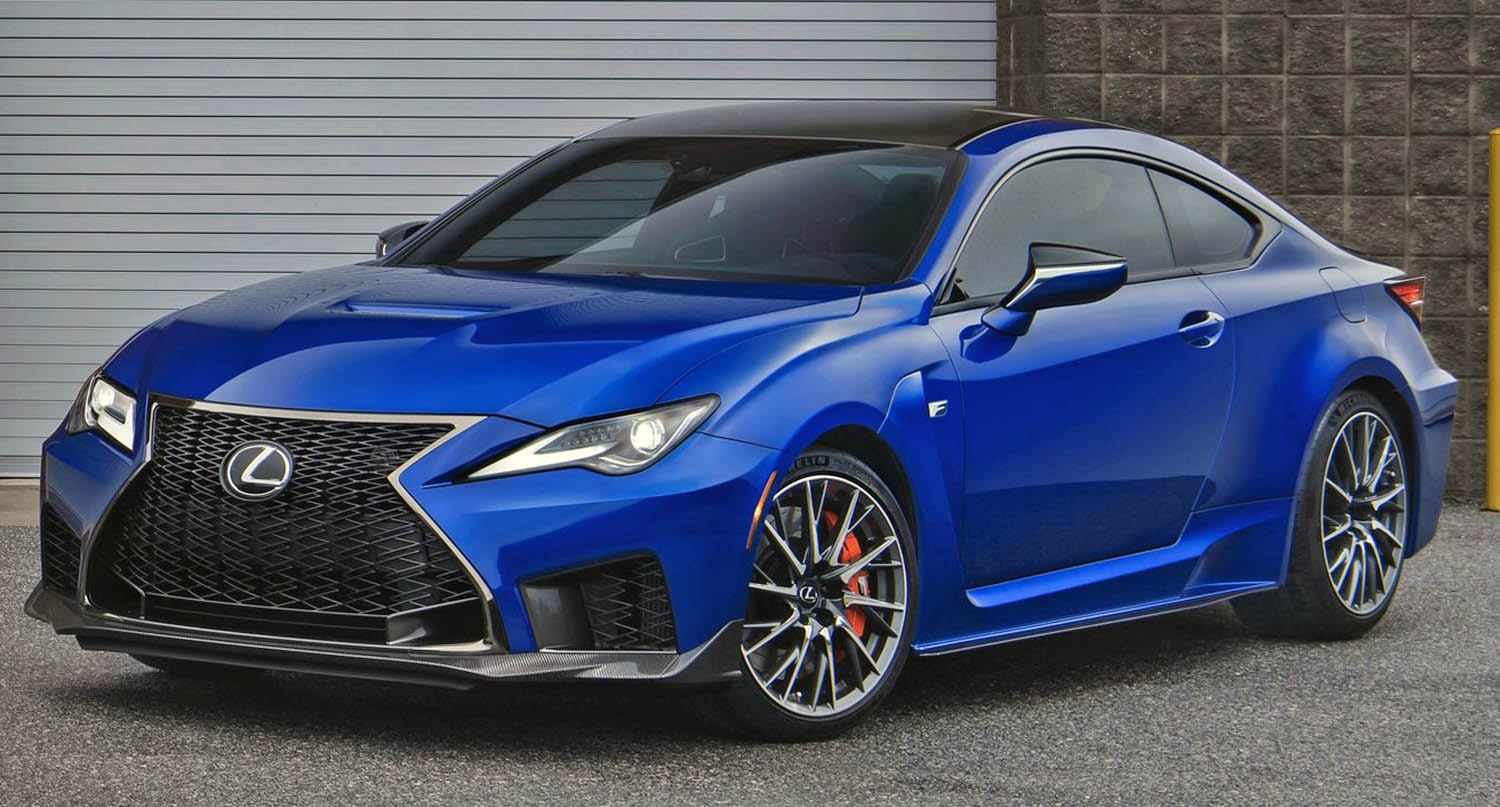 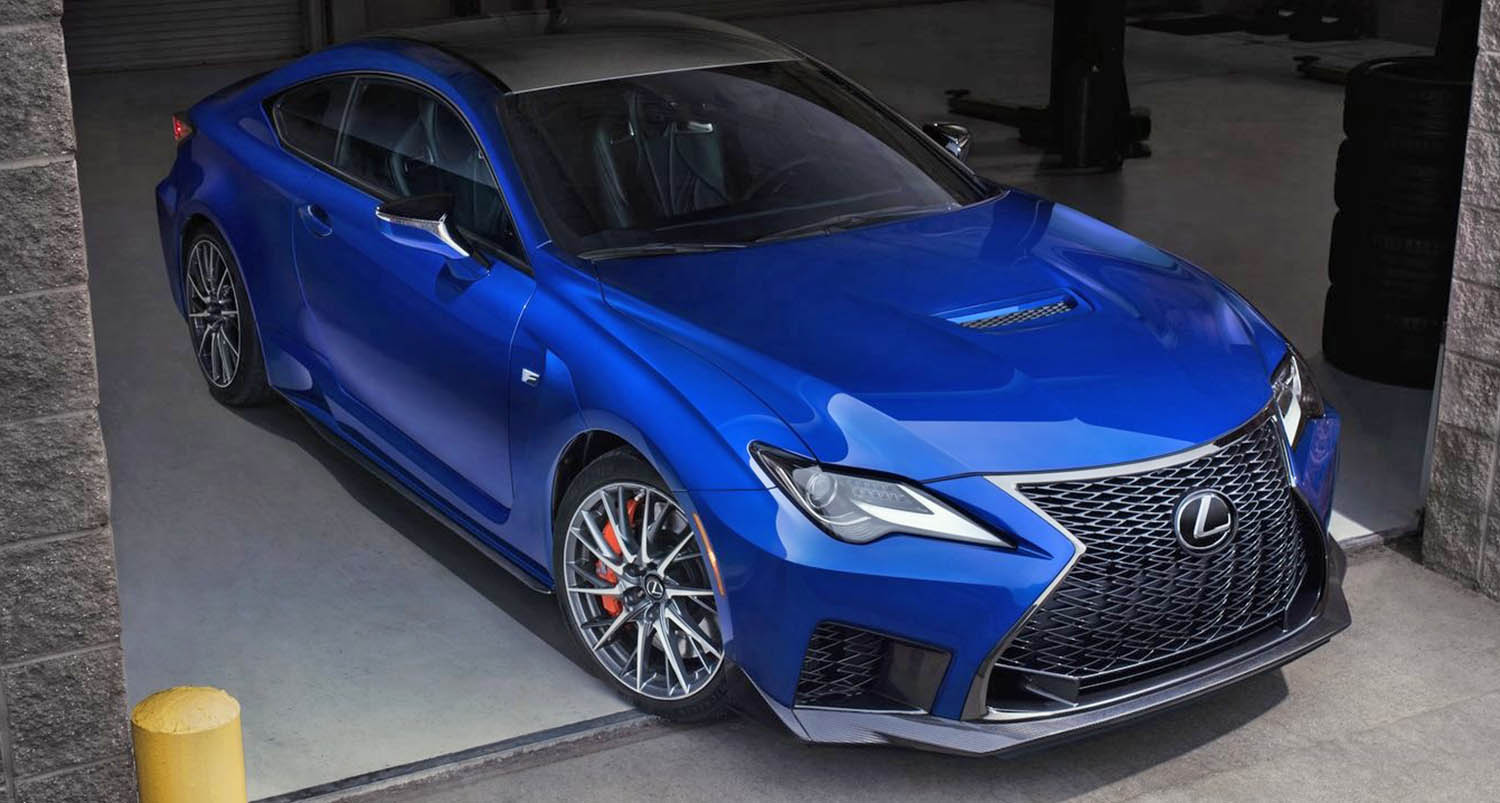 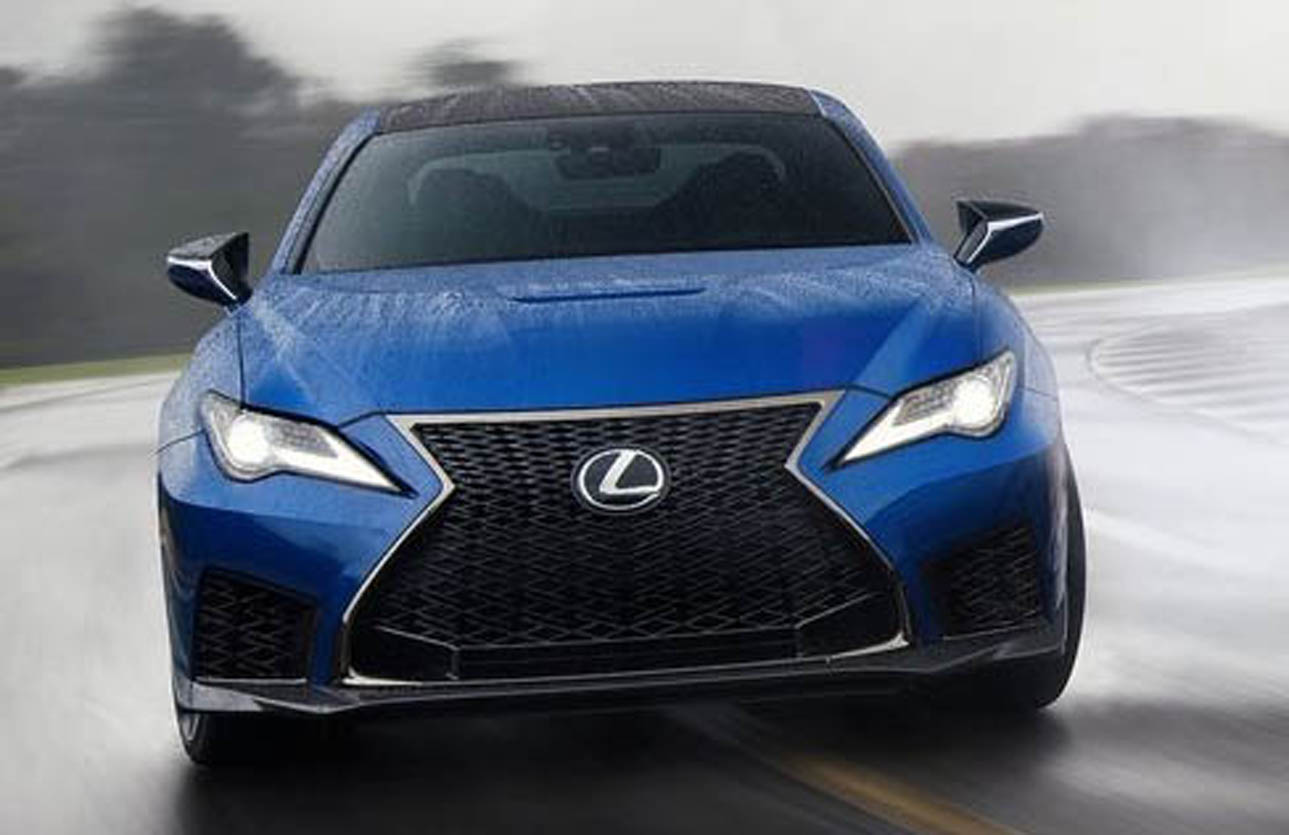 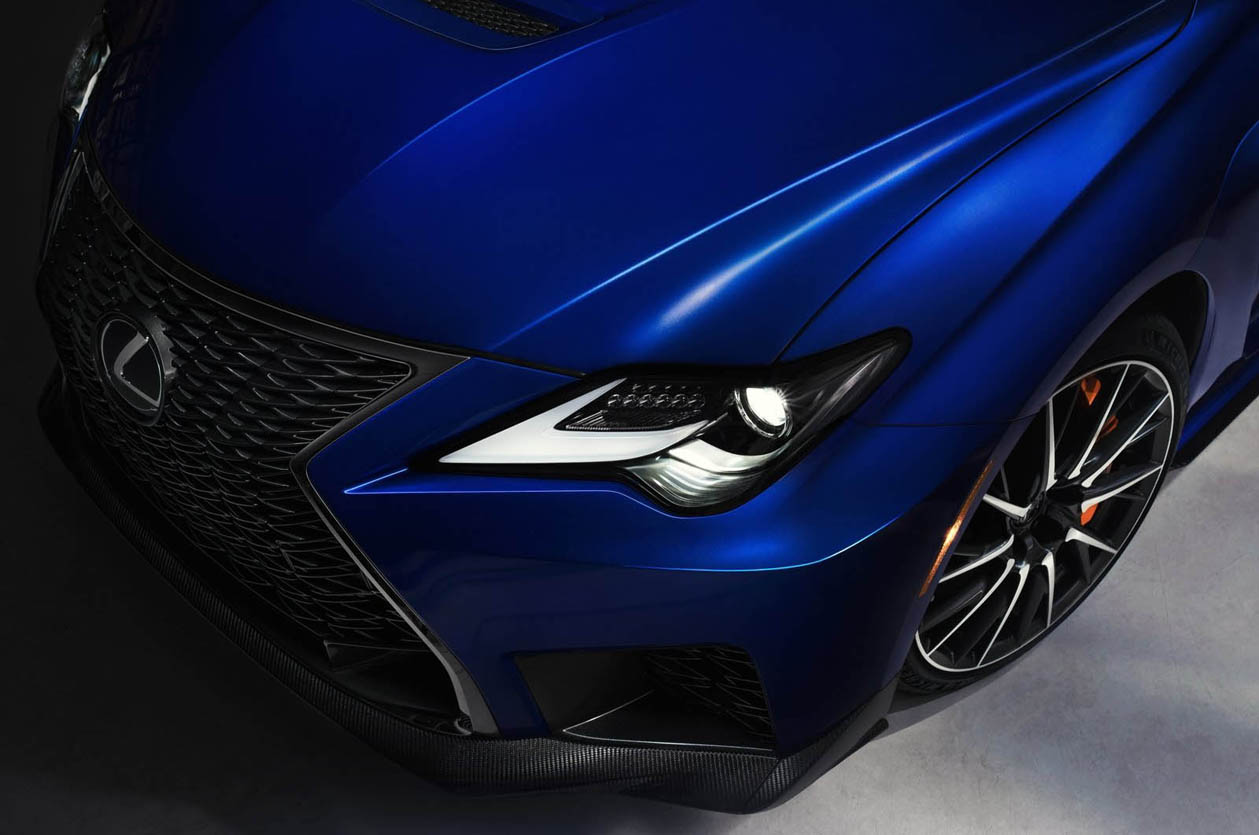 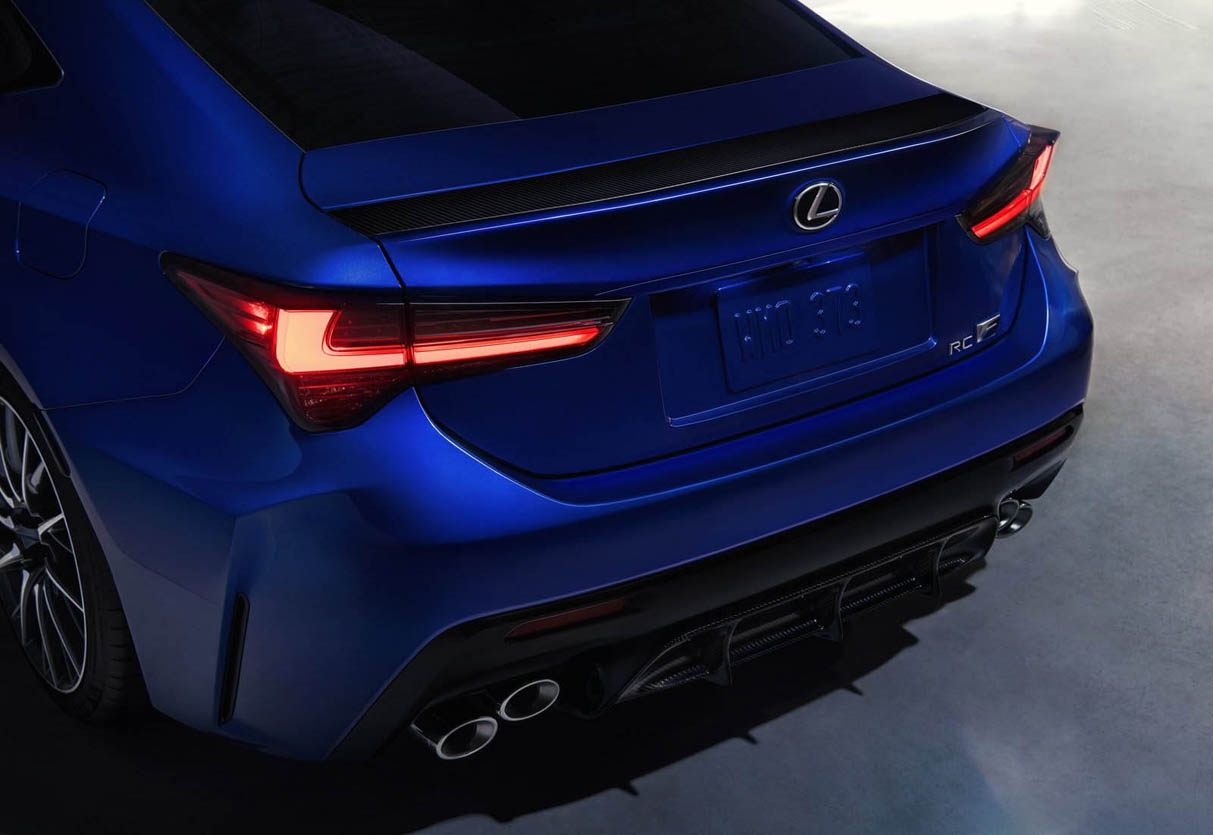 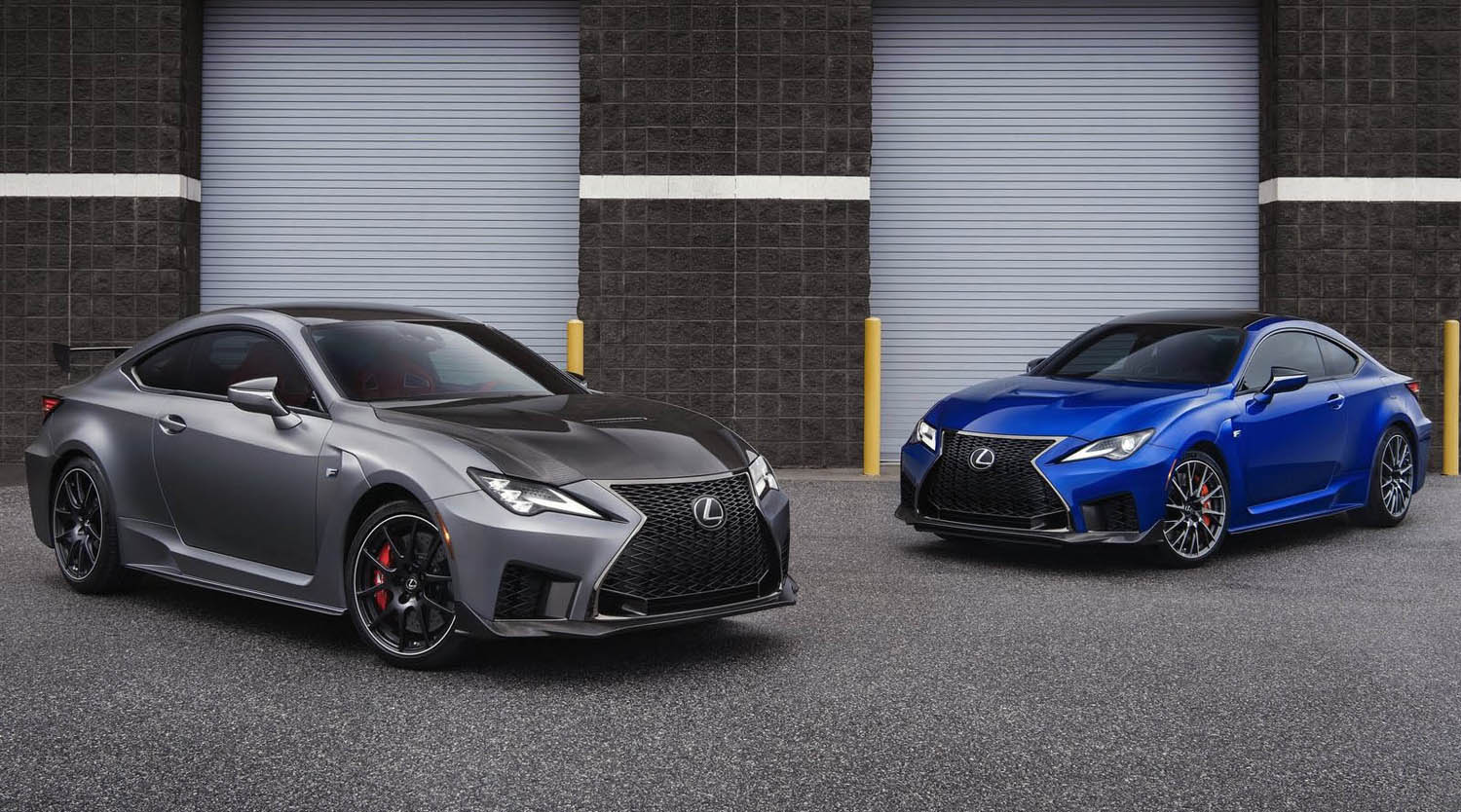 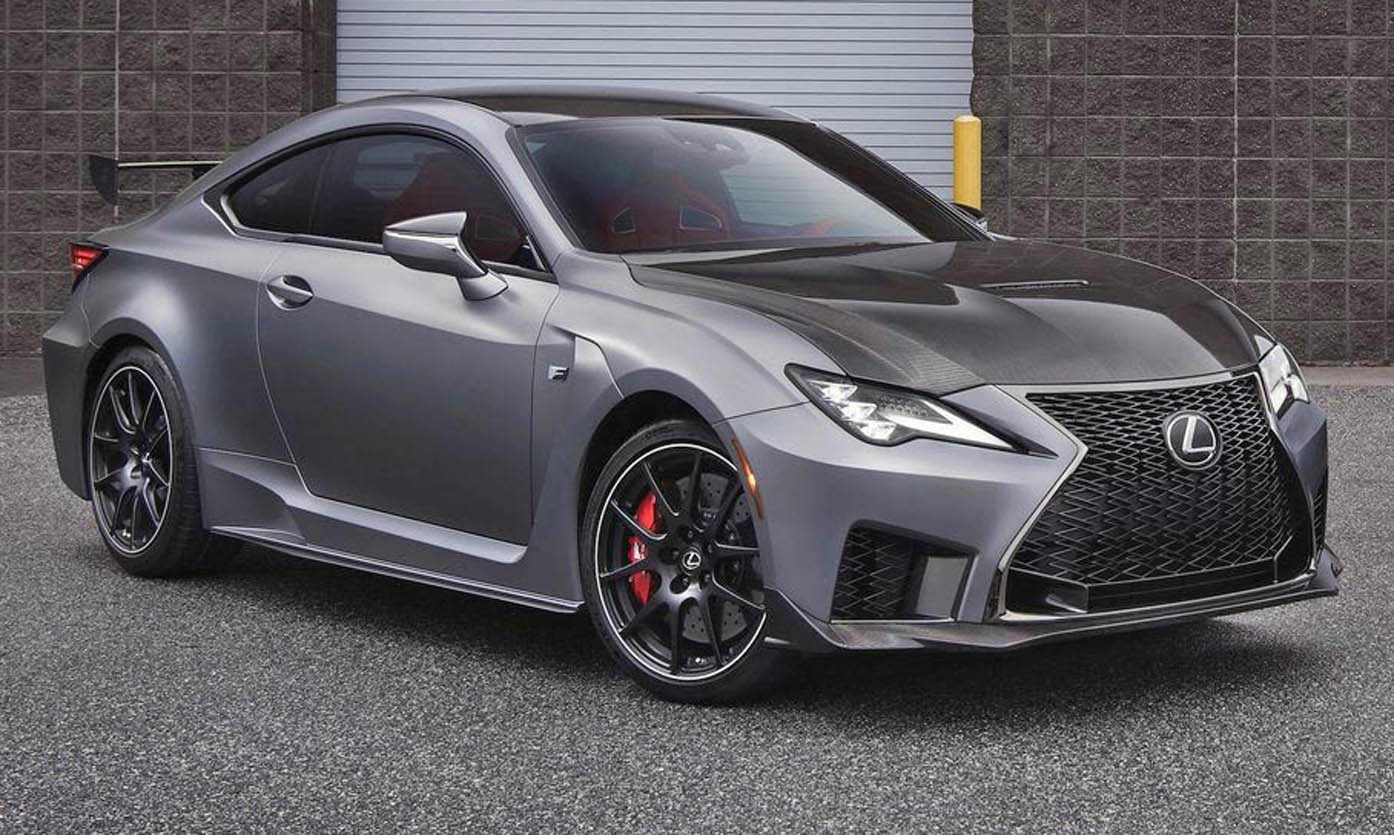 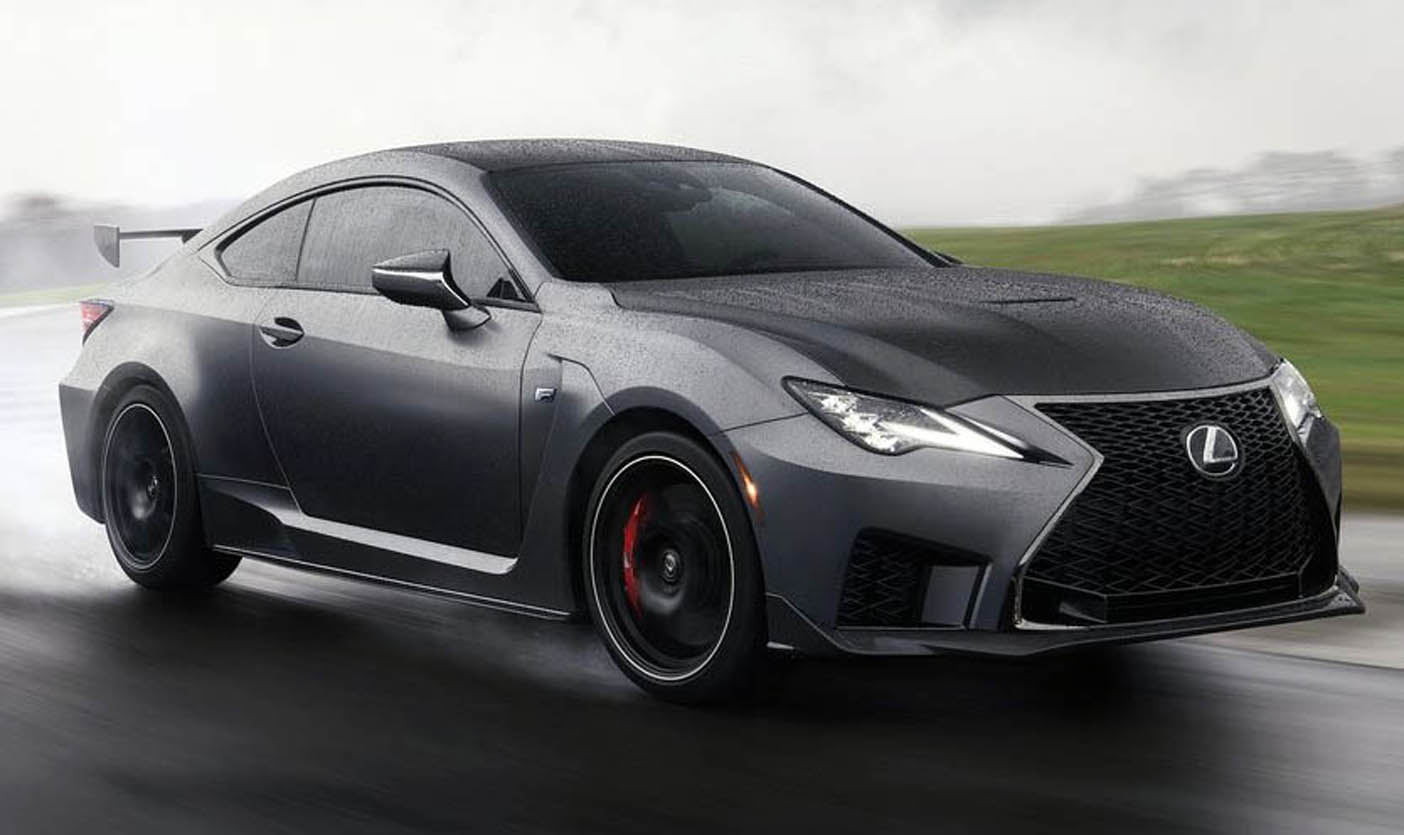