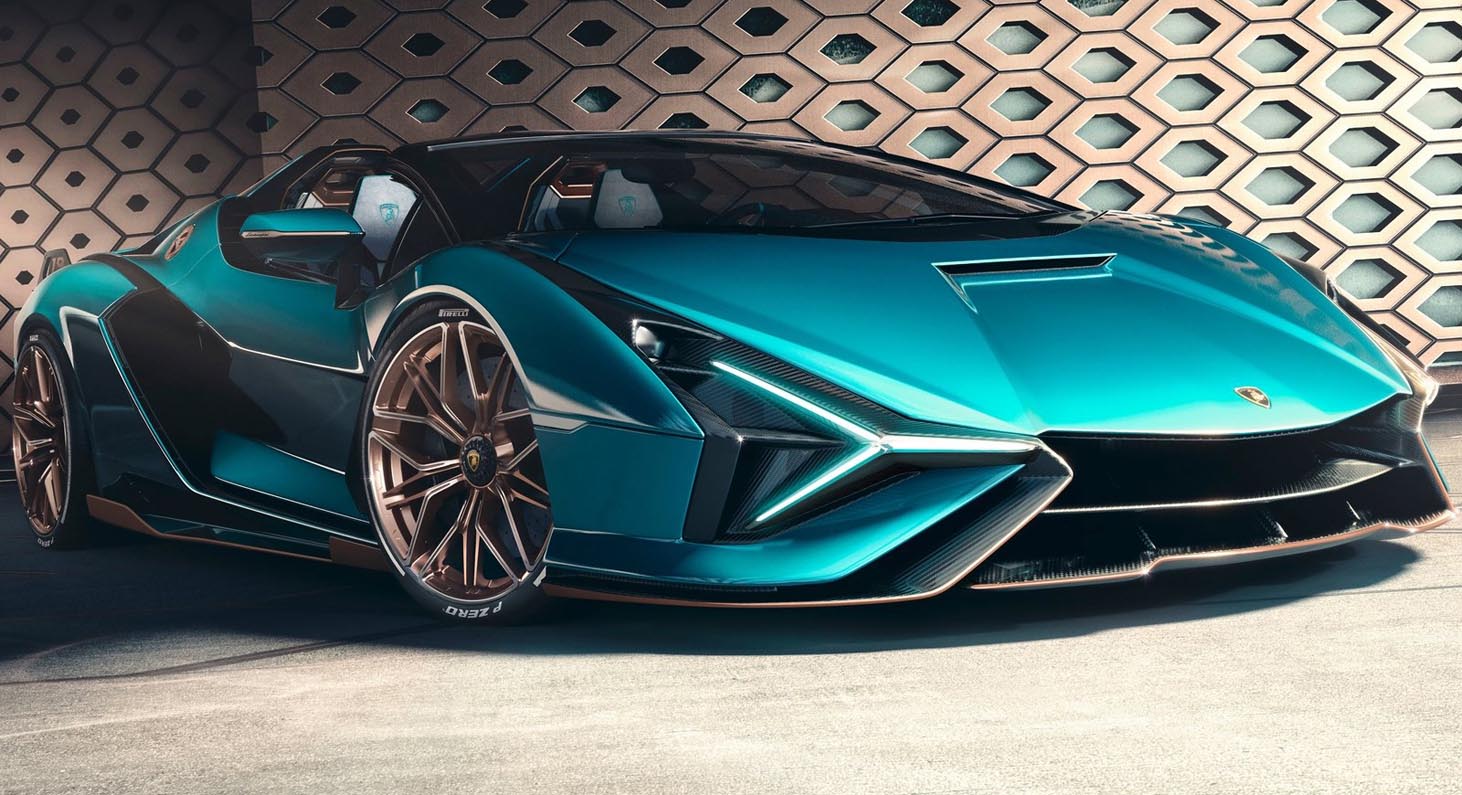 The roofless design of the Sián Roadster puts an exclusive group of drivers in one of the most spectacular cockpits ever: always open to the sky; resonating with the inimitable V12 sound from the most powerful Lamborghini engine to date; and experiencing extraordinary performance while reveling in the Sián Roadster’s role in Lamborghini’s route to future hybridization.

“The Sián Roadster encapsulates the spirit of Lamborghini,” says Stefano Domenicali, Automobili Lamborghini Chairman and Chief Executive Officer. “It is the expression of breathtaking design and extraordinary performance, but most importantly embodies important future technologies.

The Sián’s innovative hybrid powertrain heralds the direction for Lamborghini super sports cars, and the open-top Sián Roadster affirms a desire for the ultimate lifestyle Lamborghini as we move towards a tomorrow demanding new solutions.”

The Lamborghini Sián Roadster makes its debut in Blu Uranus, especially selected by Lamborghini’s Centro Stile, which together with the Ad Personam department works with every Sián client to entirely personalize the color and finish of their Roadster.

Encapsulating the blue of the sky and the green of the fields, evoking the freedom and driving elation delivered by the open top Sián Roadster’s performance, the car is finished with Oro Electrum wheels: the color chosen by Lamborghini to signify electrification.

The complementary interior is an elegant combination of white with Blu Glauco detailing and aluminum elements in Oro Electrum: new-design air vents produced via 3D printing allows customization with a client’s initials. 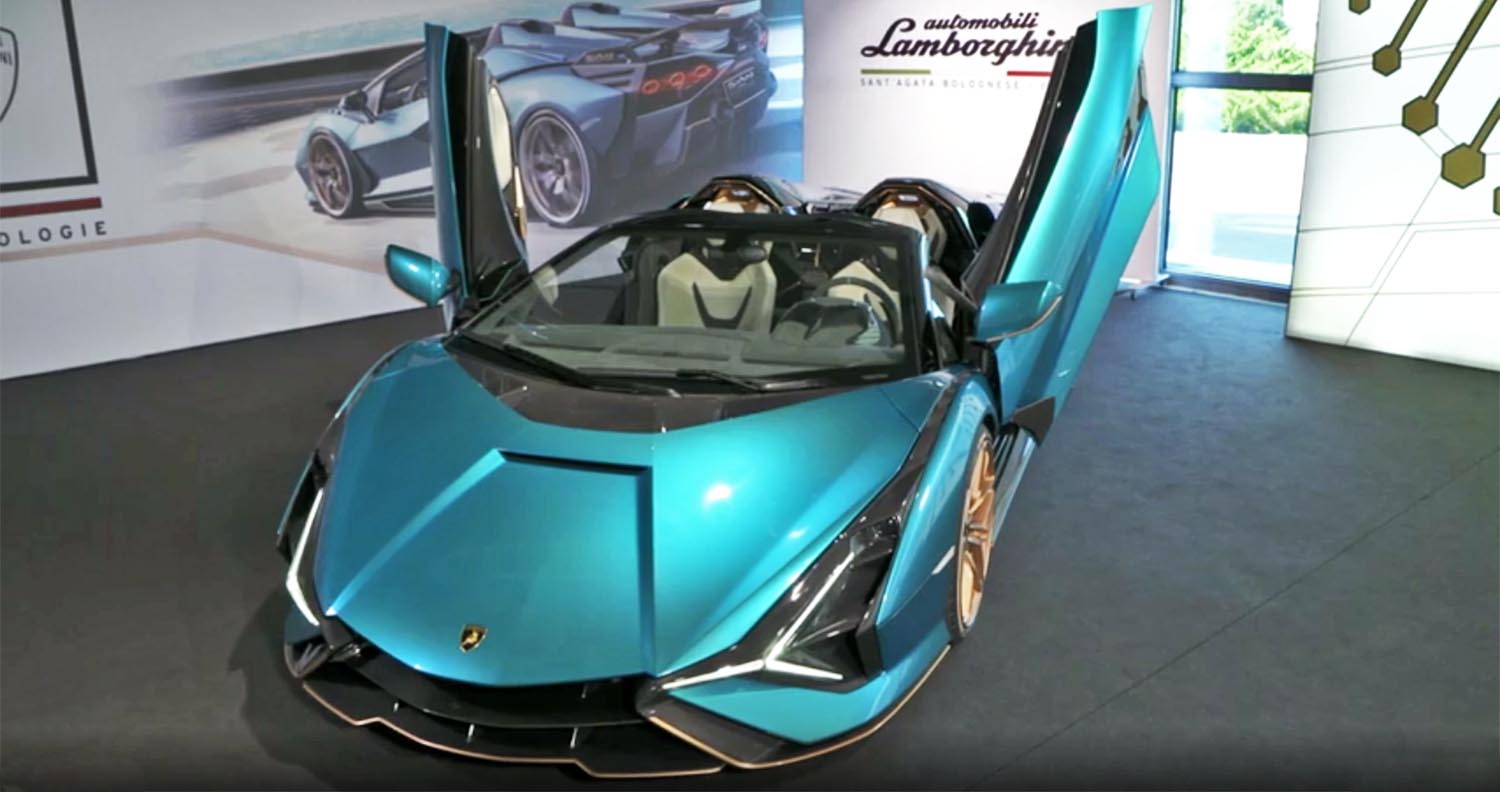 Design for the future

The Lamborghini Sián Roadster asserts the futuristic design of the coupé, but as a true roadster adds a new purity with the open-air cabin. The aerial view of the Sián Roadster is evocative of the iconic periscopio line inspired by the first Countach, running diagonally from the cockpit to the rear and culminating in the aerodynamic airstreamers behind driver and passenger.

Active cooling vanes on the rear use unique materials-science technology patented by Lamborghini: operation of the vanes is triggered by the reaction of smart-material elements to the temperature generated by the exhaust system, causing them to rotate and providing an elegant and lightweight cooling solution.

The extreme and strong rear of the car incorporates Lamborghini’s evocative hexagon design, including six hexagonal taillights inspired by the Countach. The rear wing is integrated within the profile and extends out only during the driving to enhance the performance. 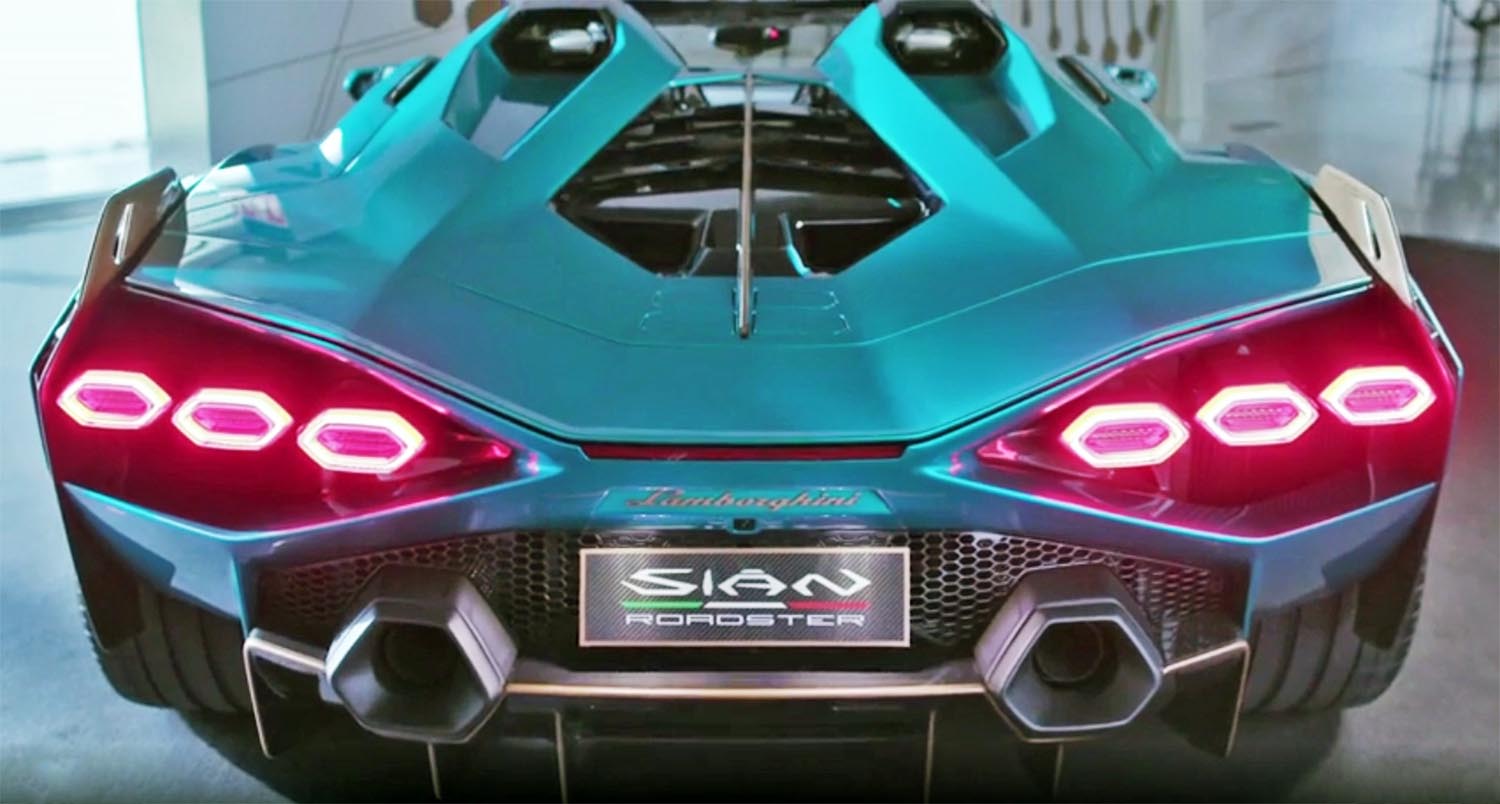 Electrification and hybrid technologies for a new tomorrow

The Lamborghini Sián Roadster’s hybrid system provides the highest power possible via the lightest solution, combining the V12 engine with a new powertrain. A 48-volt e-motor, delivering 34 hp, is incorporated into the gearbox to provide immediate response and improved performance.

The e-motor also supports low-speed maneuvers such as reversing and parking with electric power.

Three times more powerful than a battery of the same weight and three times lighter than a battery producing the same power, the electric system with the supercapacitor and e-motor weighs only 34 kg, thus it delivers a remarkable weight-to-power ratio of 1.0 kg/hp. Symmetric power flow ensures the same efficiency in both charging and discharging cycles: the most lightweight and efficient hybrid solution.

This advanced technology combines with the V12 engine, which incorporates titanium intake valves and is uprated to 785 hp (577 kW) at 8,500 rpm. Combined with the additional 34 hp from the hybrid system, the Sián Roadster delivers a total of 819 hp (602 kW) and reaches a top speed of over 350 km/h.

The symmetric behavior of the supercapacitor, which contrary to normal Li-Ion batteries can be charged and discharged with the same power, fully charges the Sián’s energy storage system every time the vehicle brakes. The energy stored is an instantly-available power boost, allowing the driver to draw immediately on increased torque when accelerating away, up to 130 km/h when the e-motor automatically disconnects, improving the elasticity maneuvers and making it more than 10% faster than a car without this system.

The Sián Roadster accelerates from 0 to 100 km/h in less than 2.9 seconds. The improvement in elasticity maneuvers is even more evident, for example traction force is improved by up to 10% in third gear.

The Lamborghini Sián Roadster benefits from a heightened level of driving comfort facilitated by the hybrid system alongside dynamic handling and performance.

The moment when deceleration and missing torque is felt during gear changes powered by a traditional combustion engine, is eliminated by the torque upshift fill provided by the hybrid’s e-motor: the pilot will feel only the pull backward of acceleration, eliminating uncomfortable jerking movements. 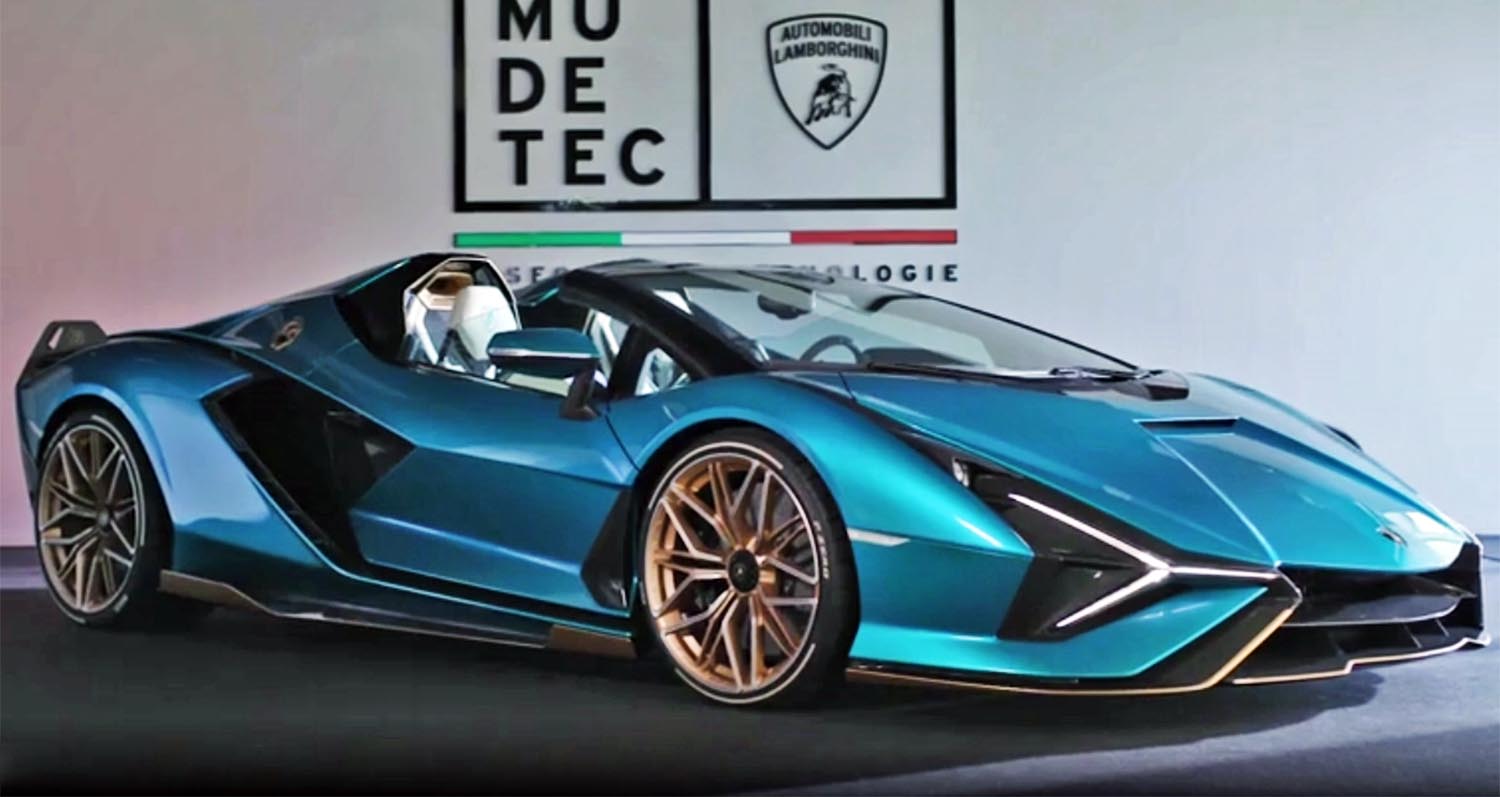 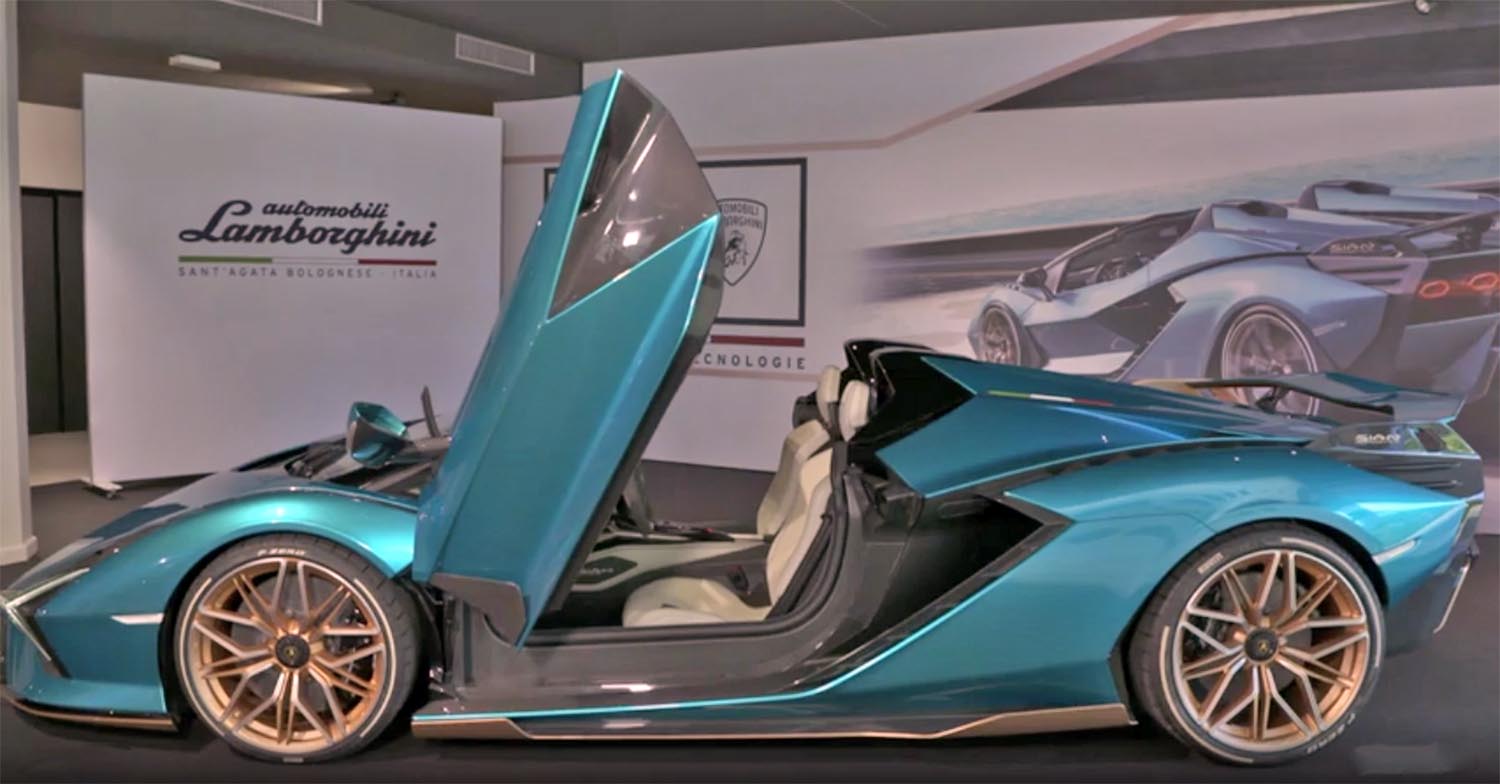 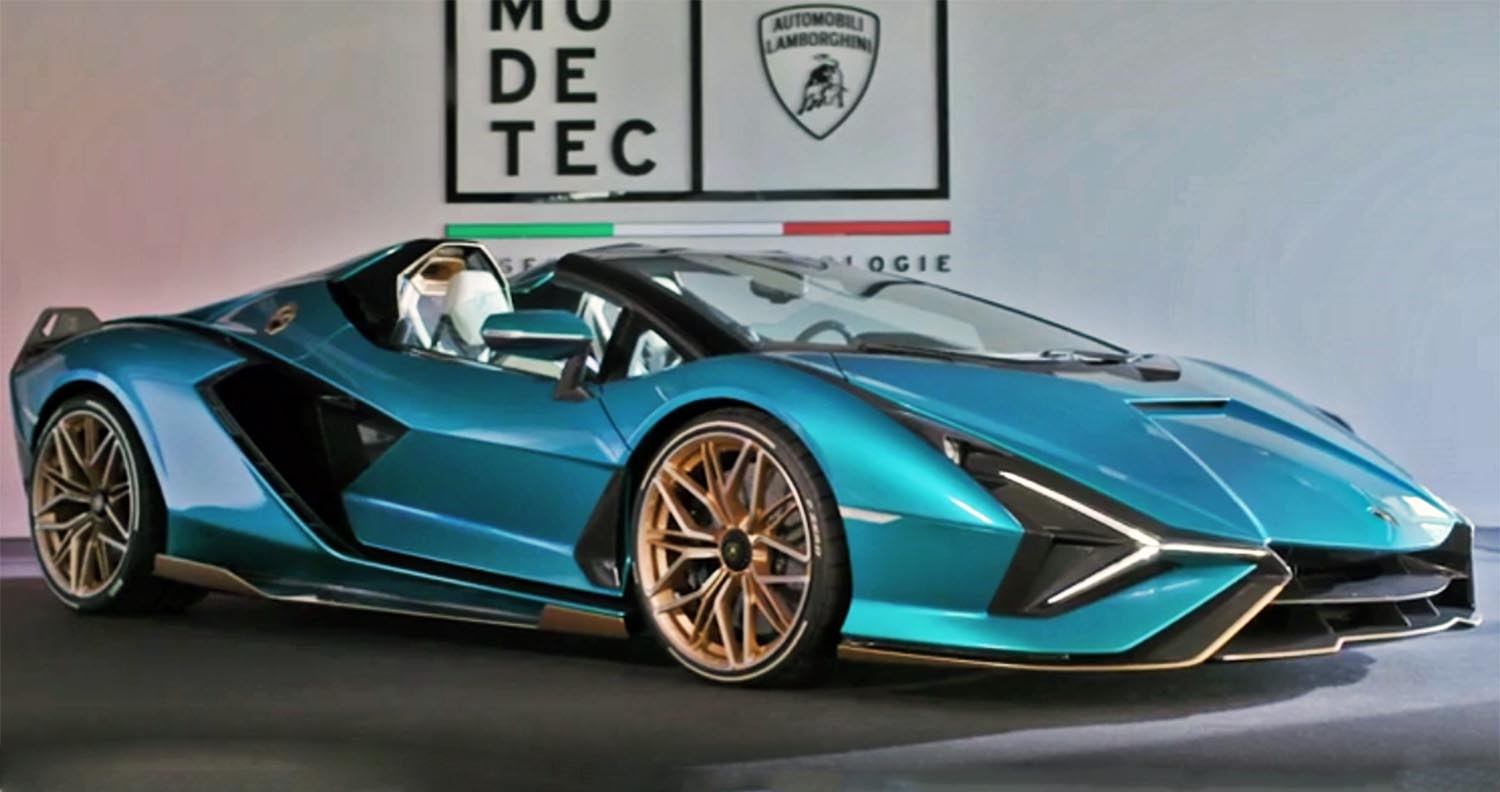 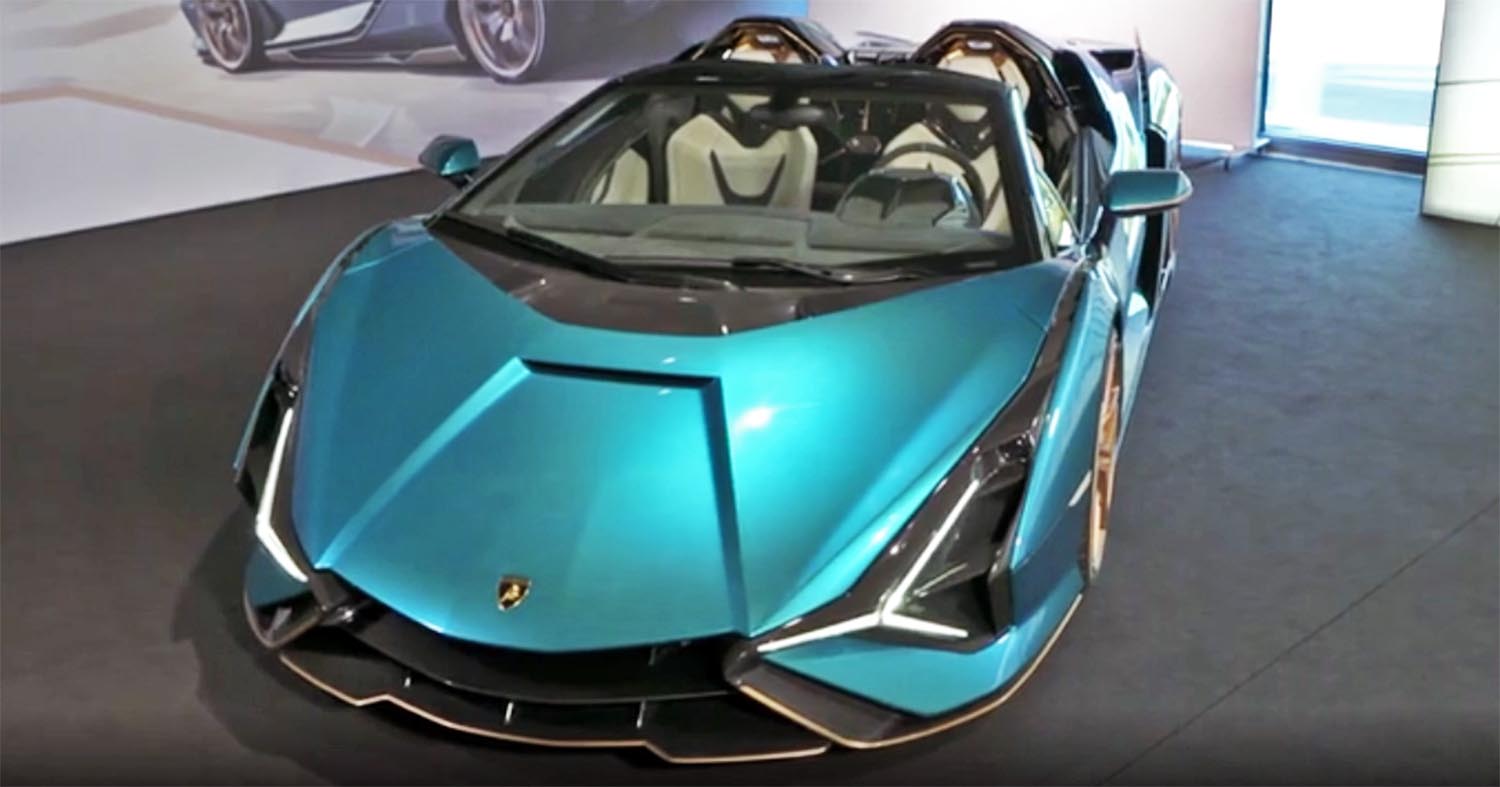 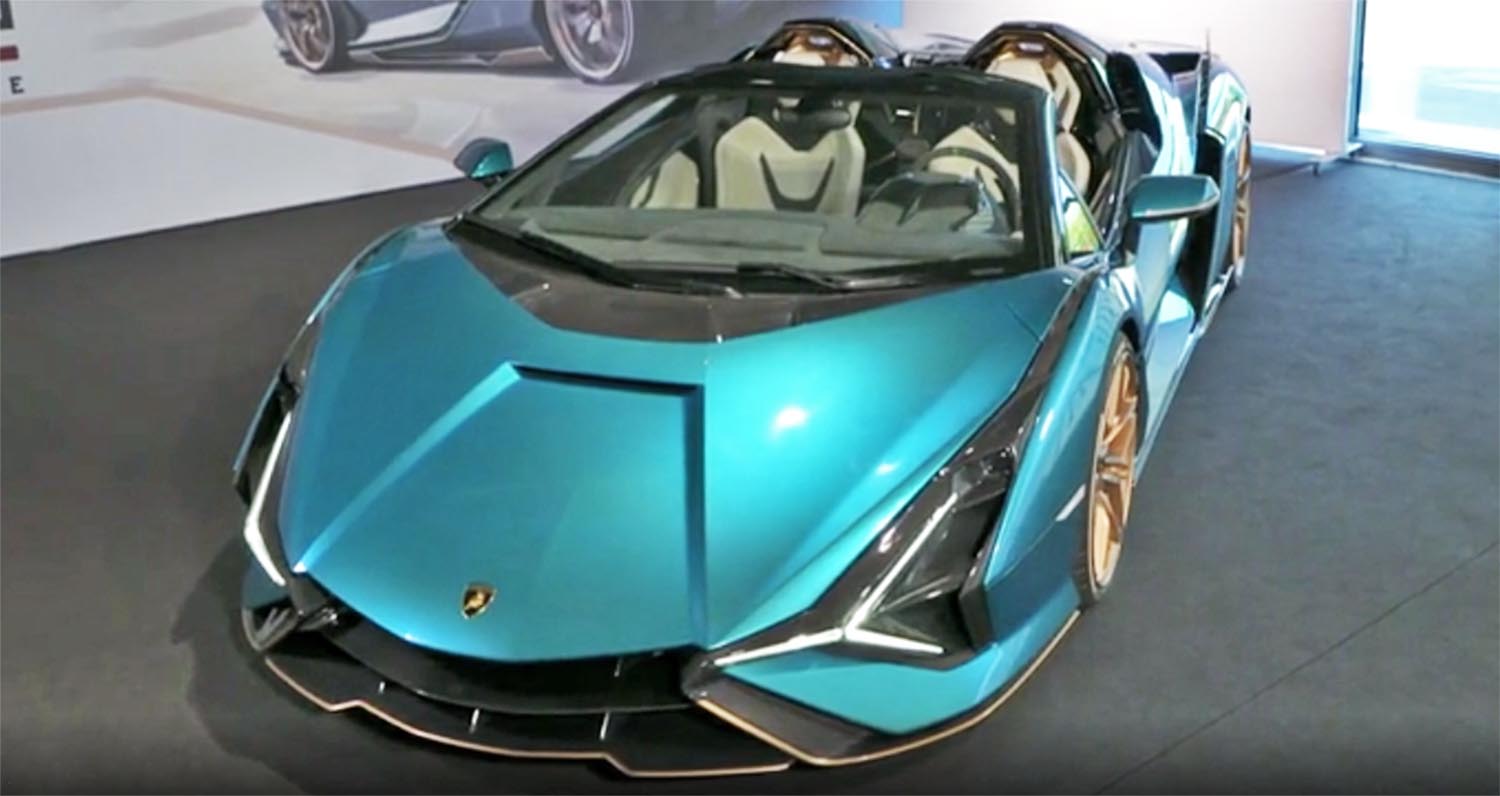 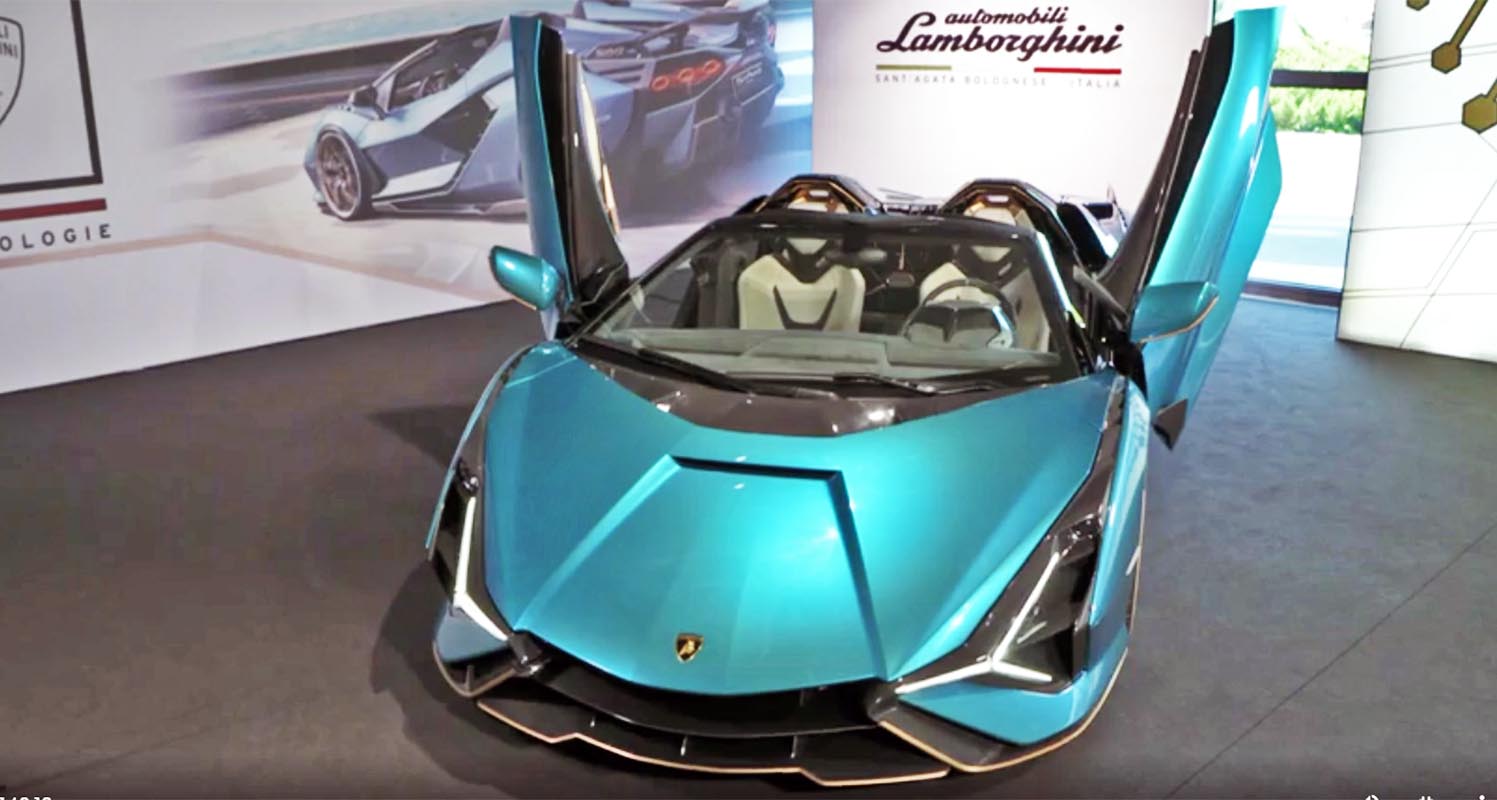 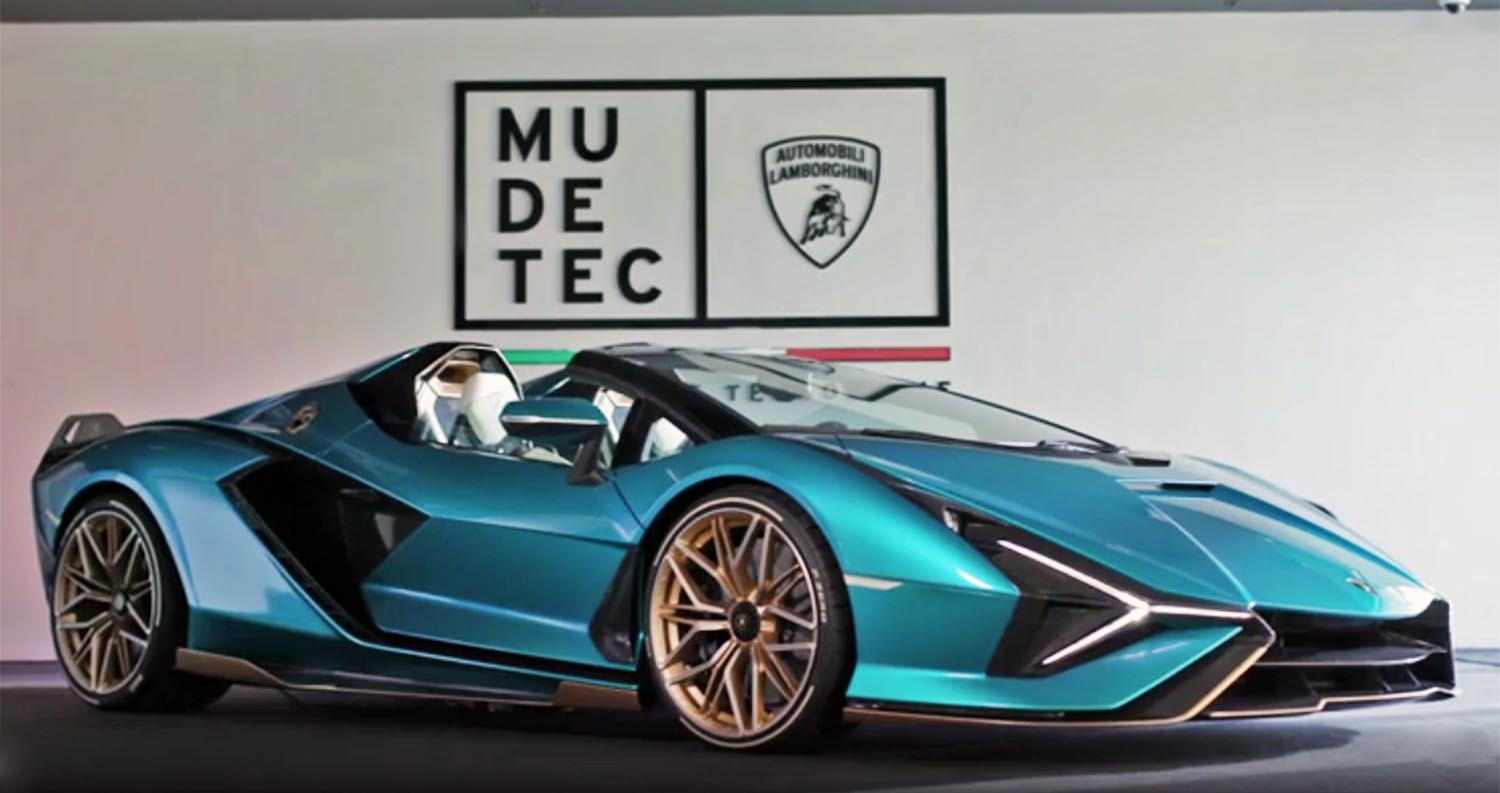 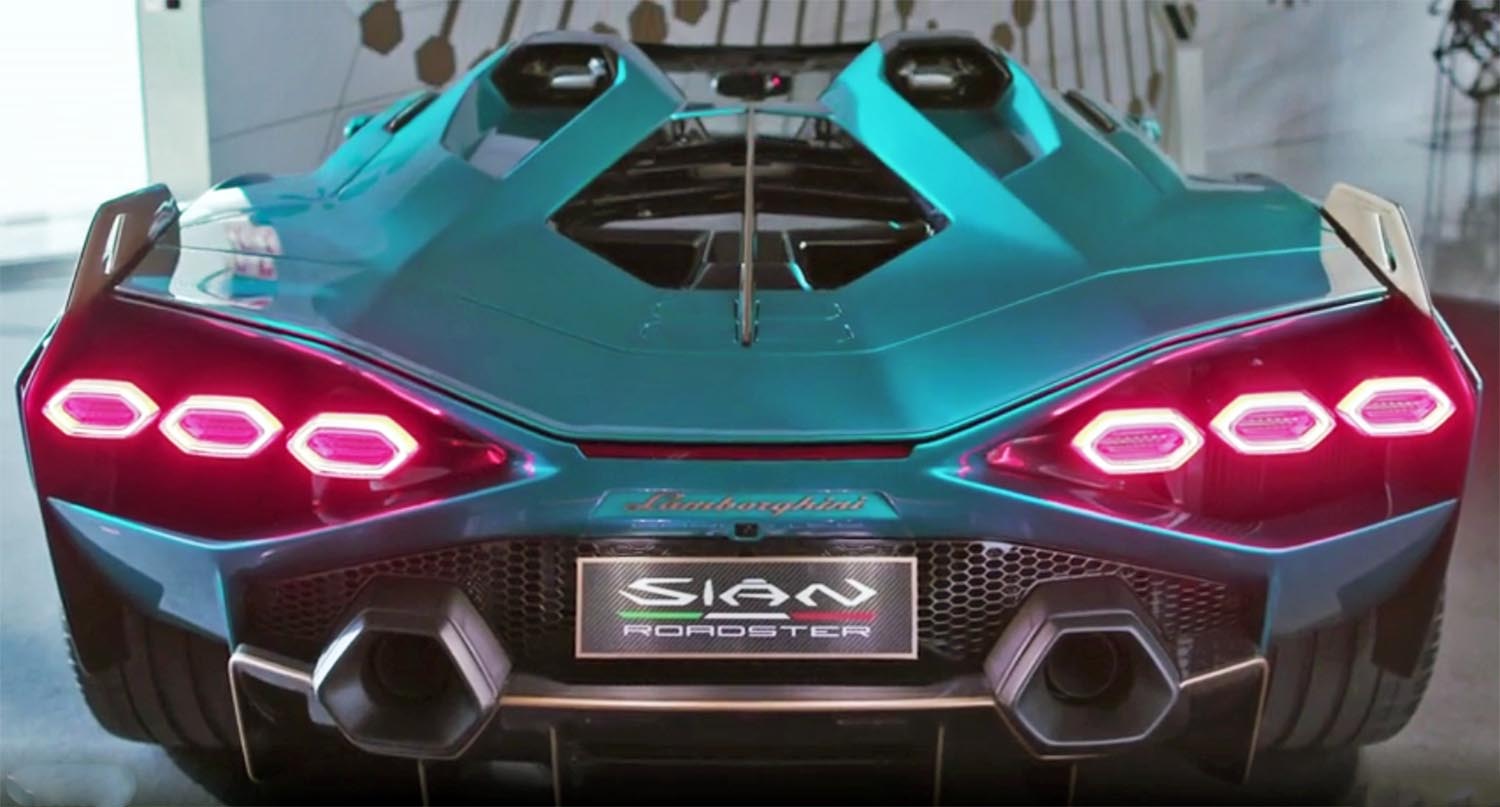 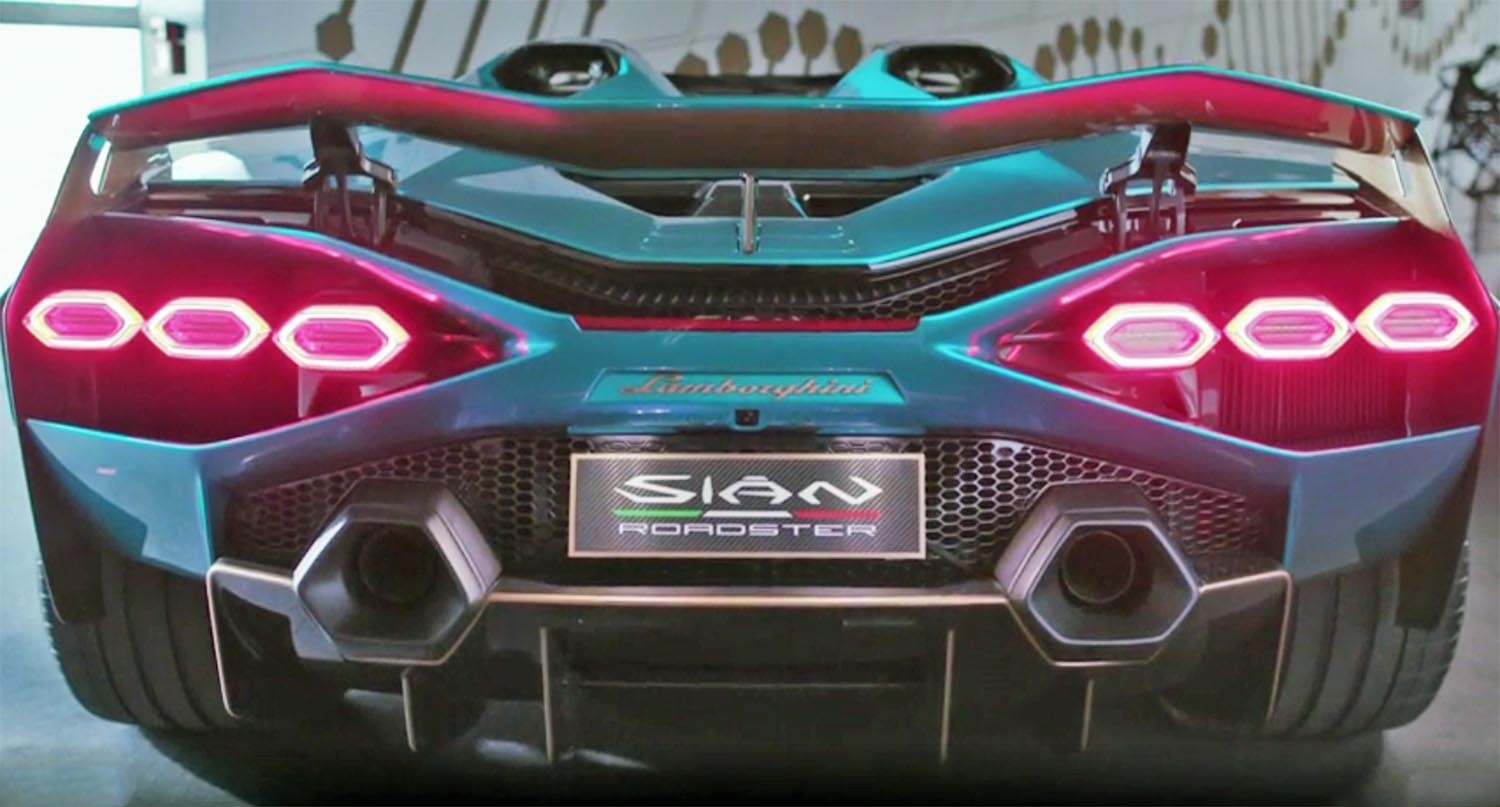 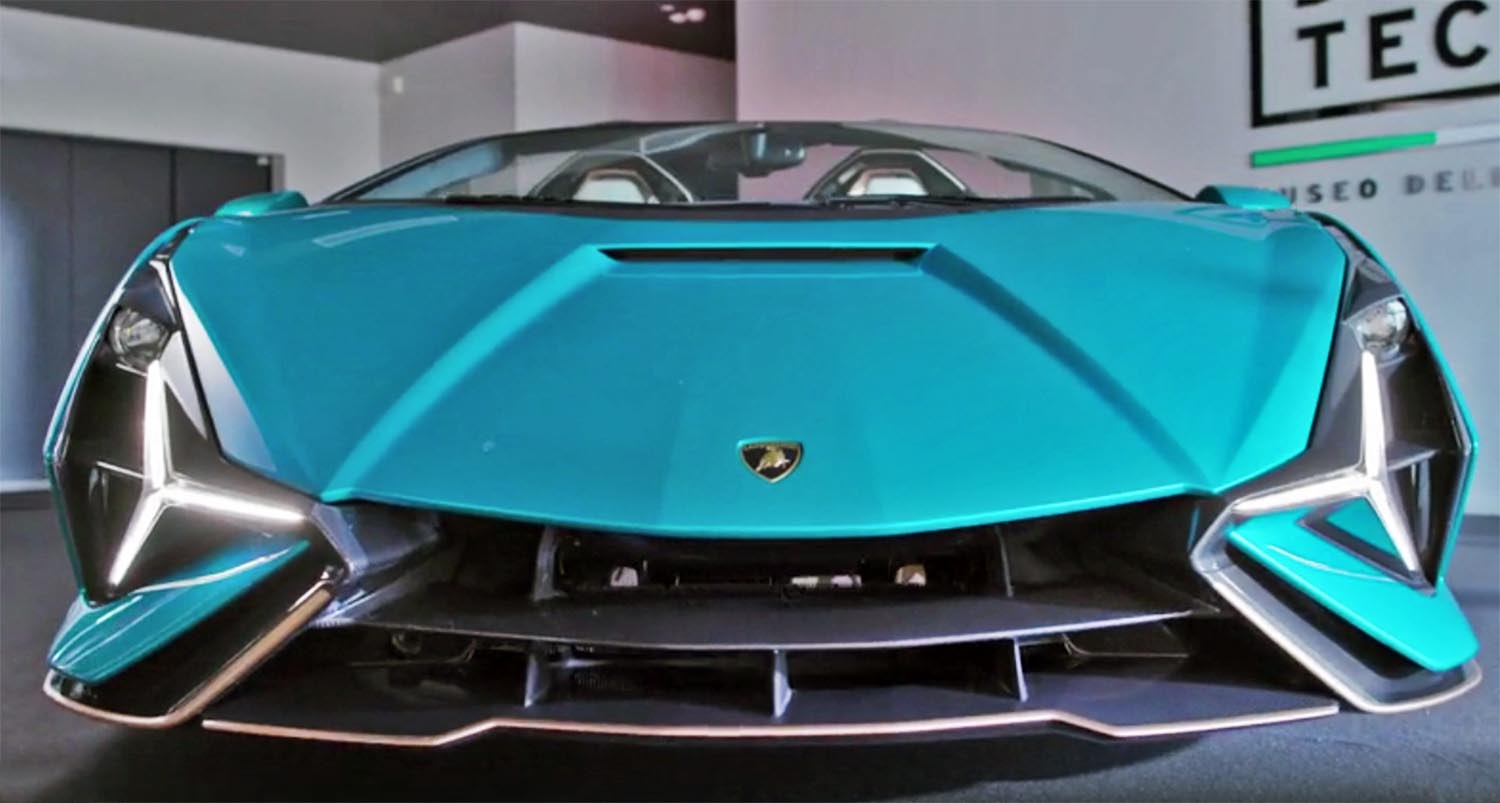 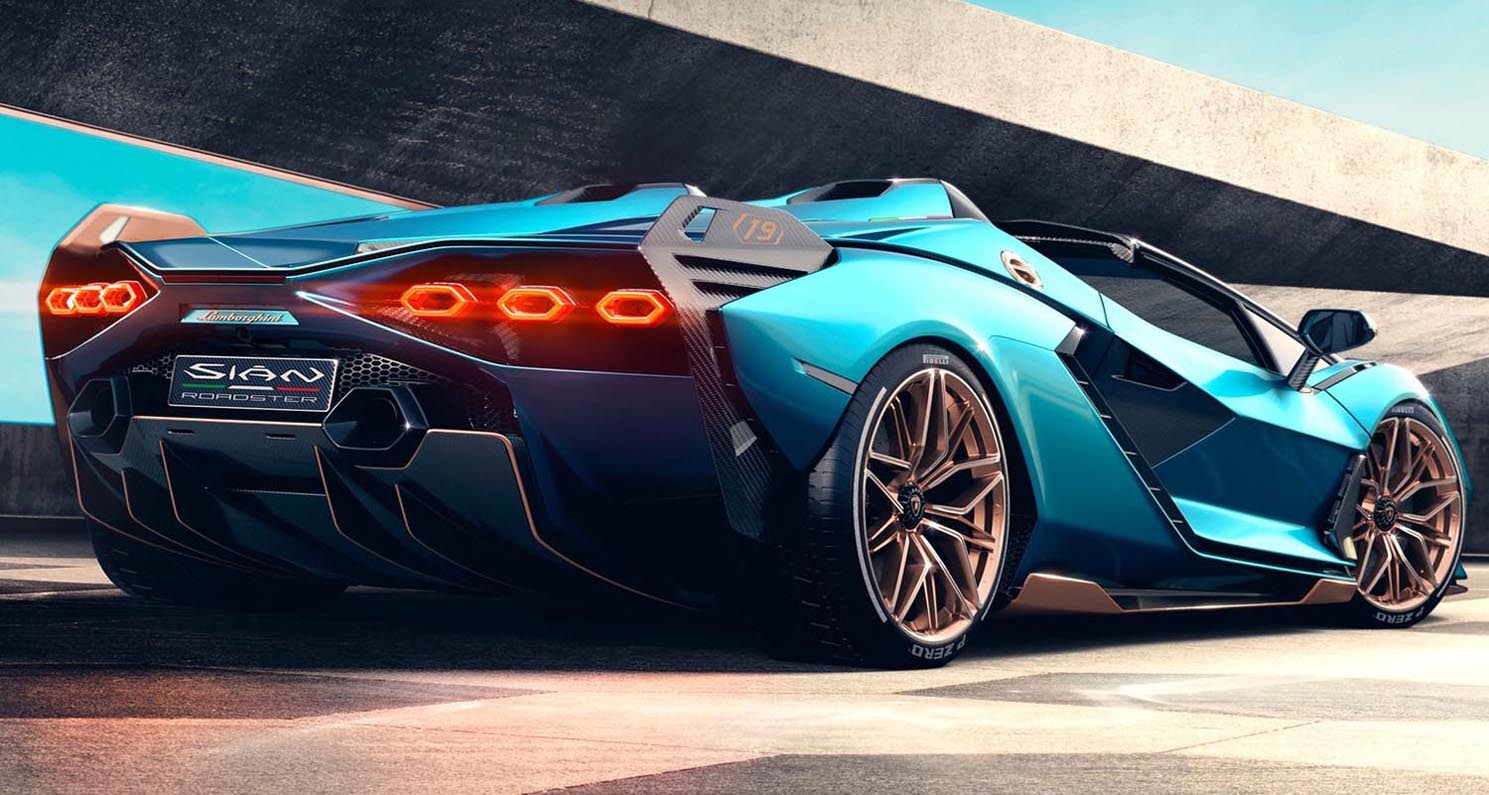 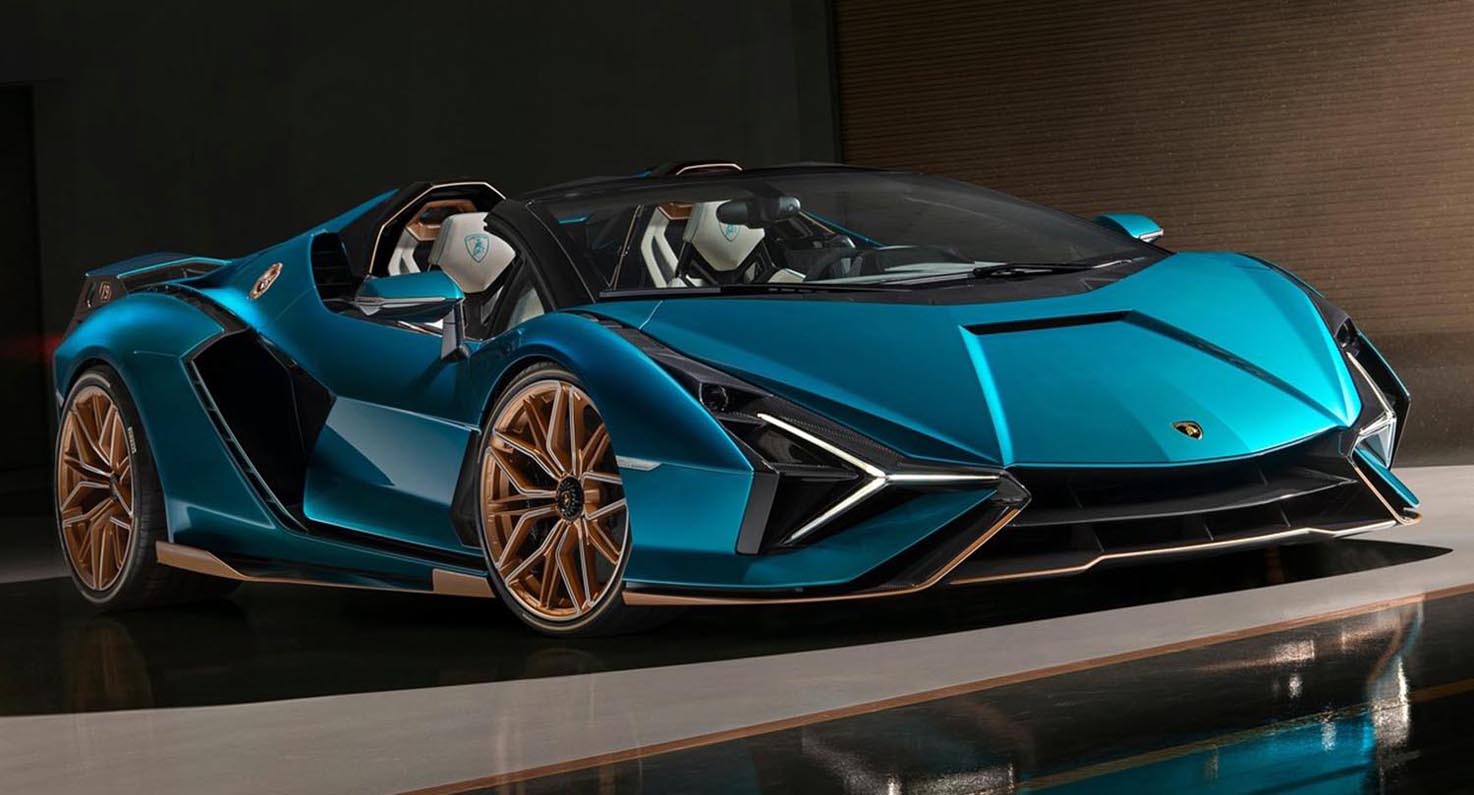 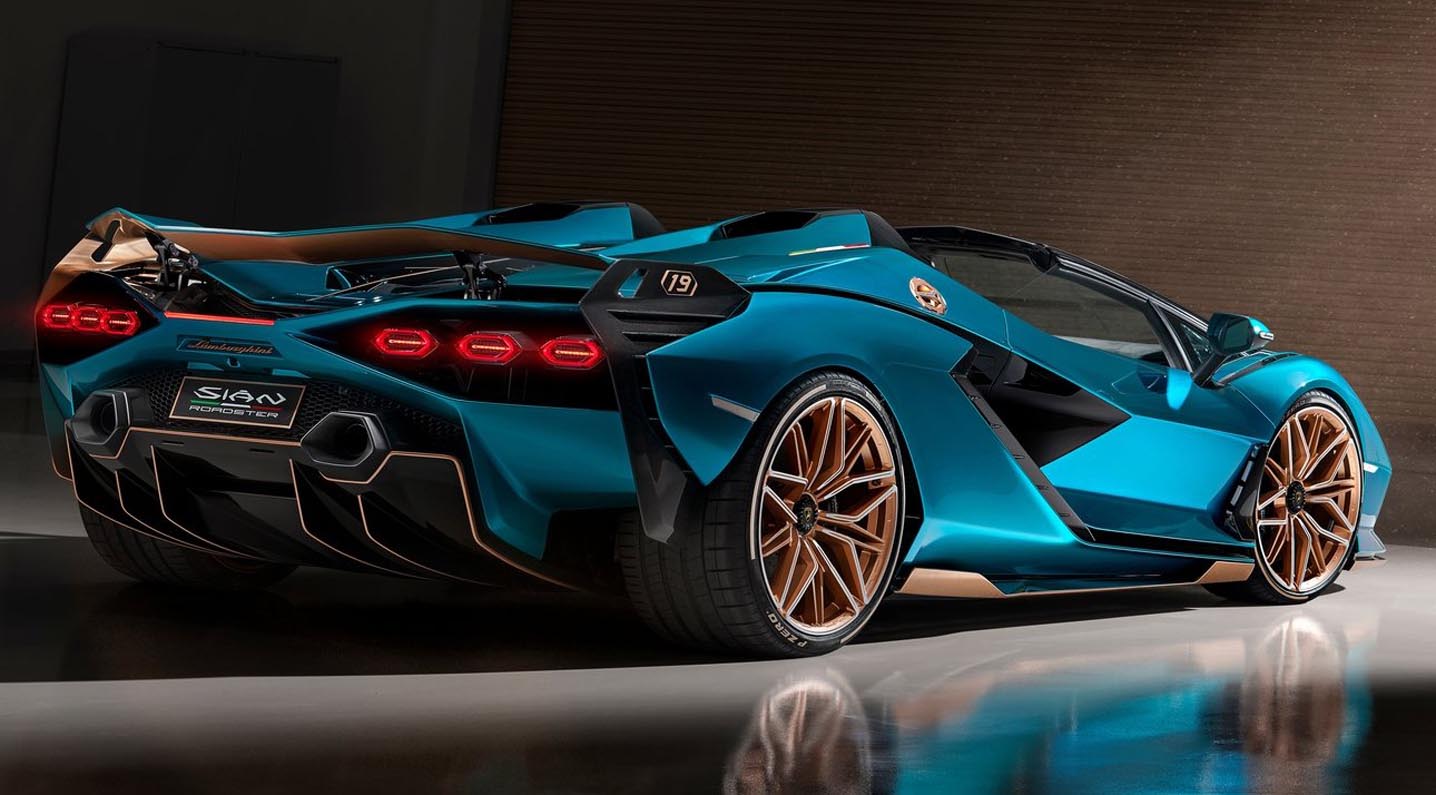 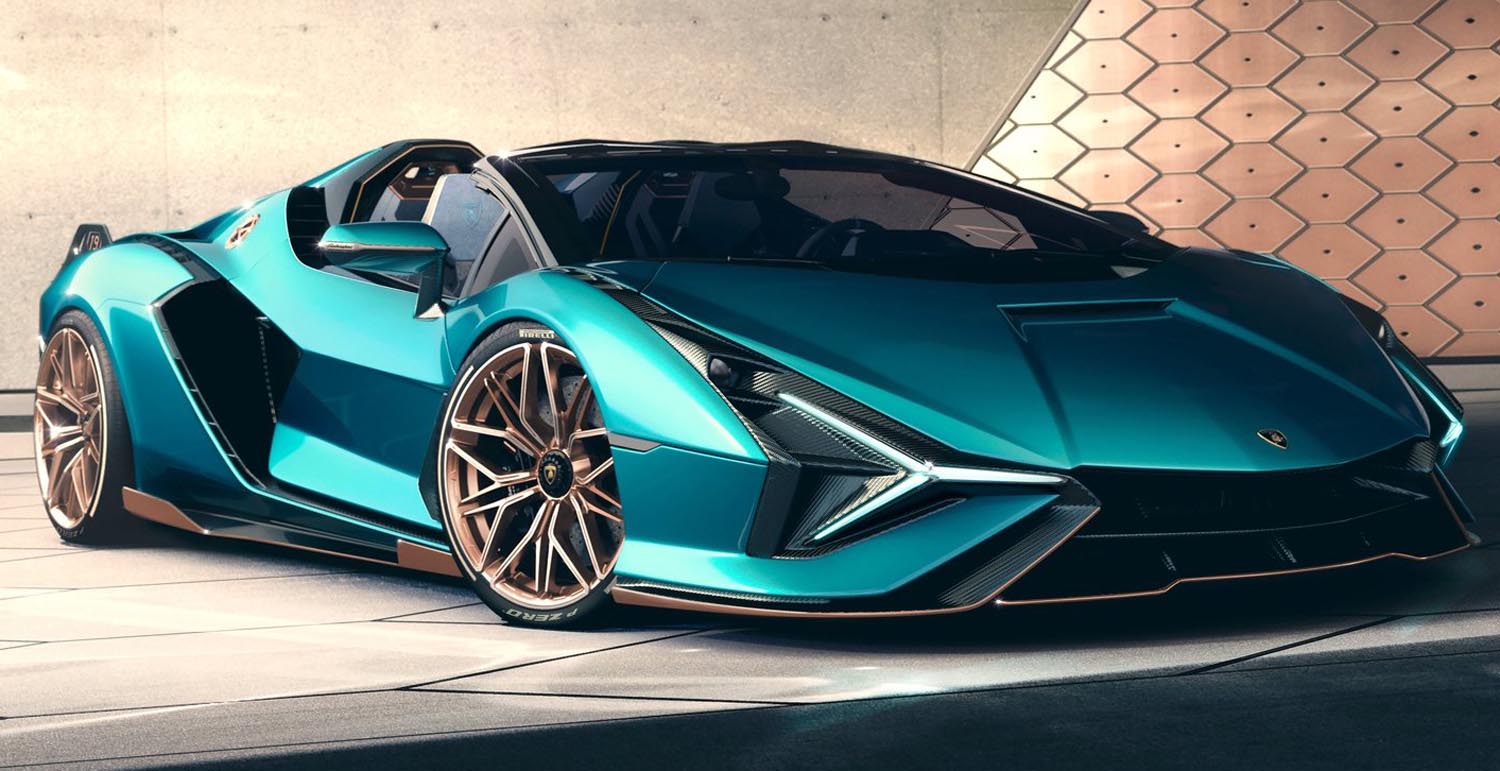 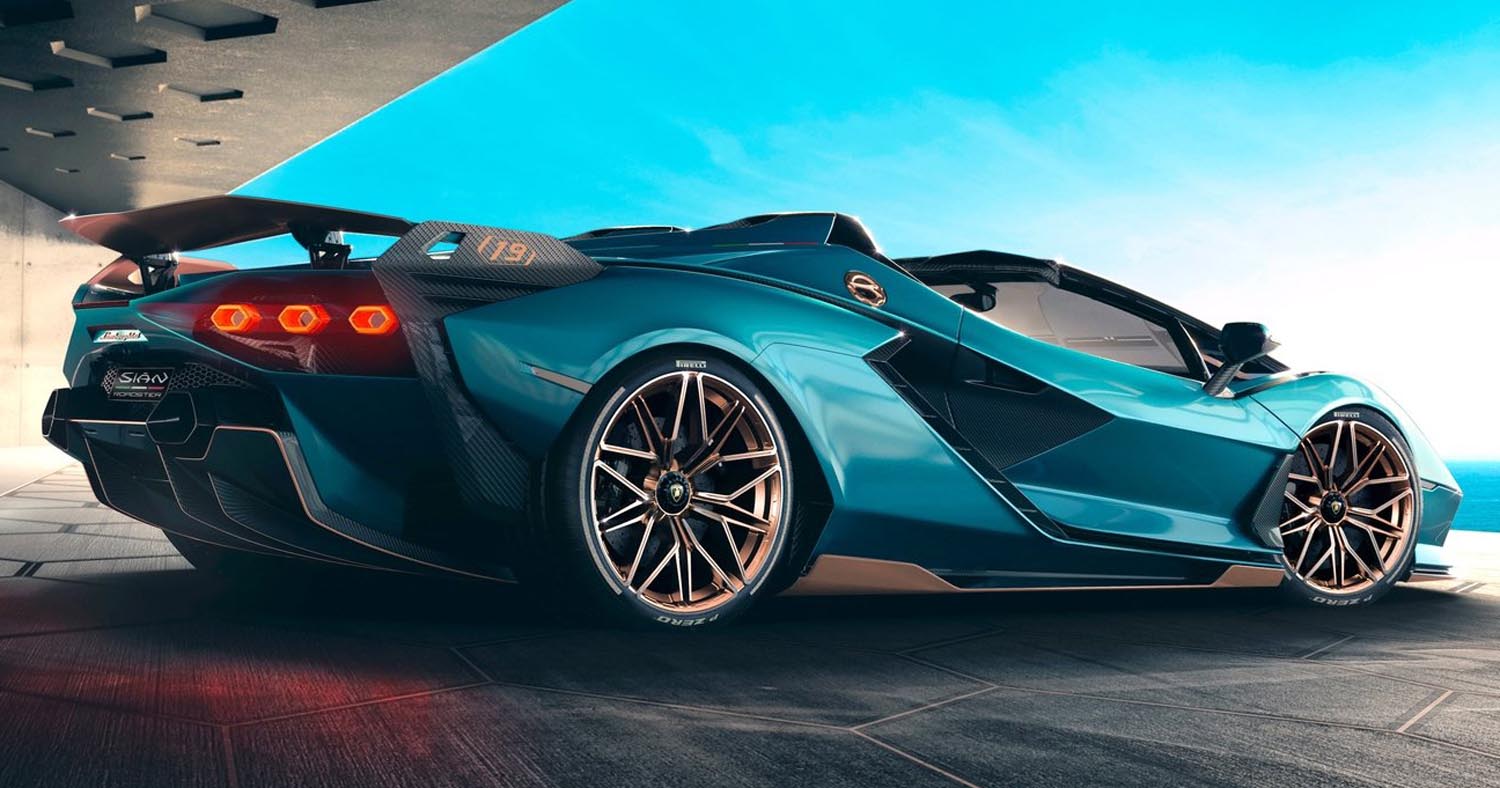 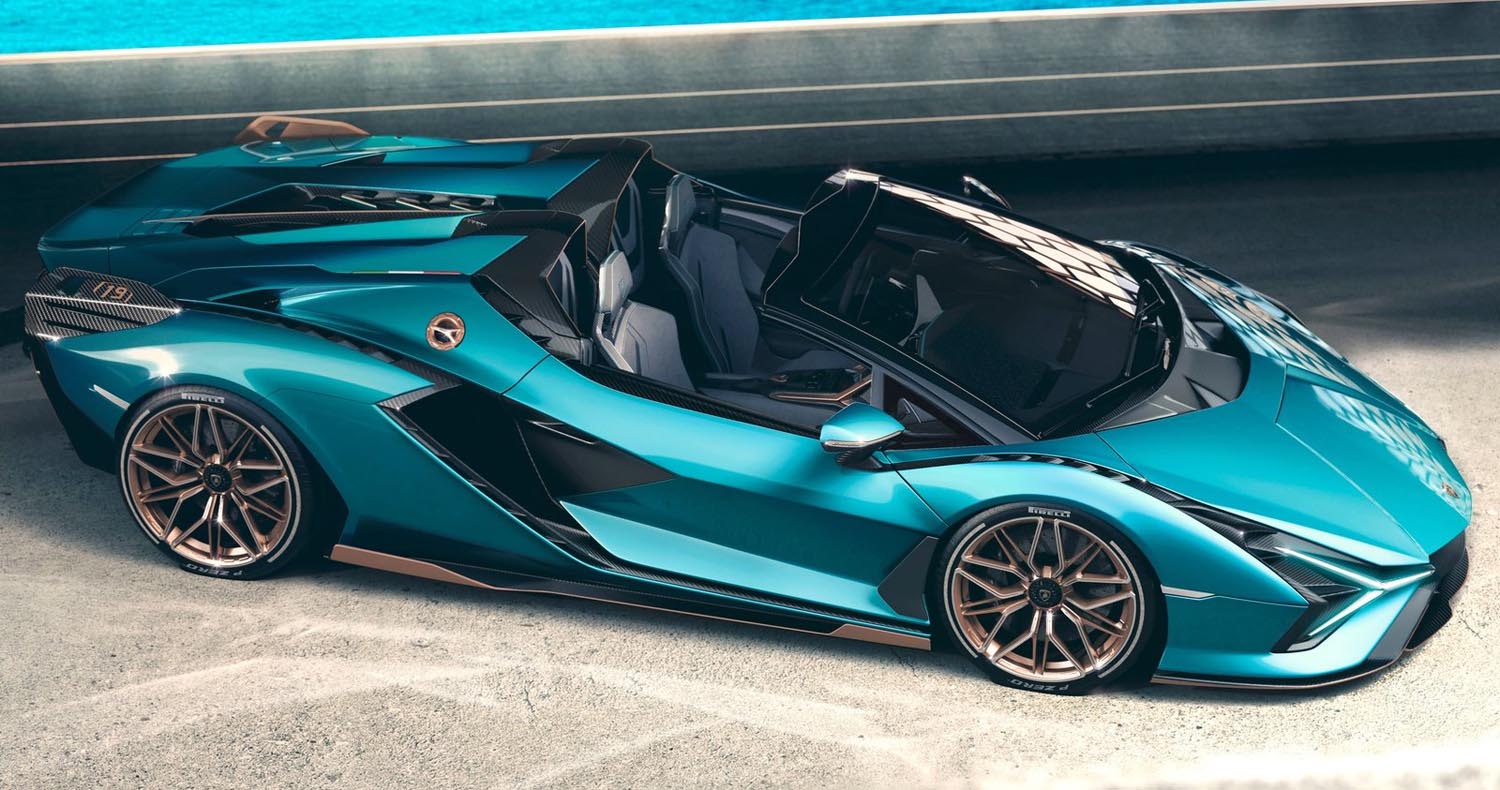 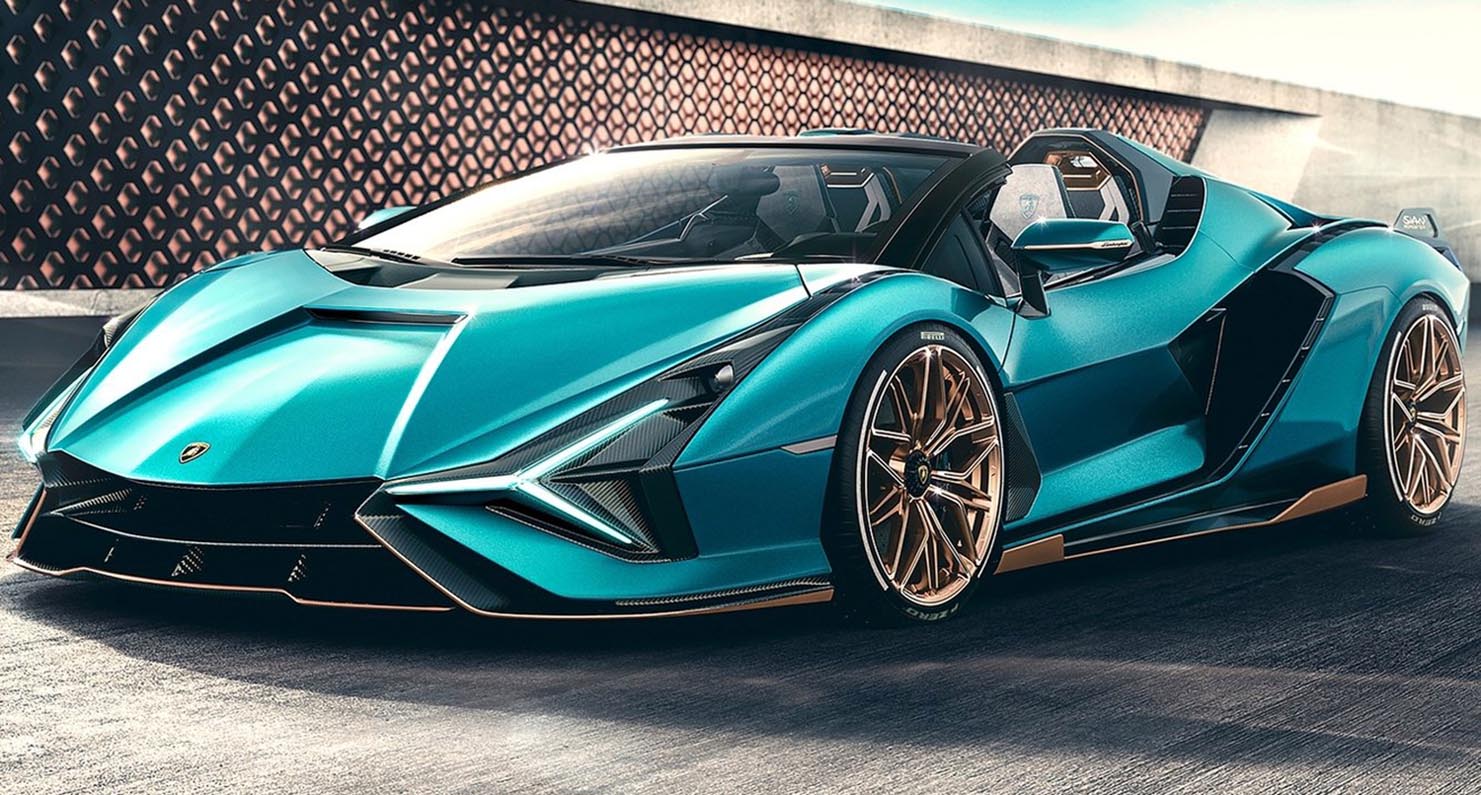 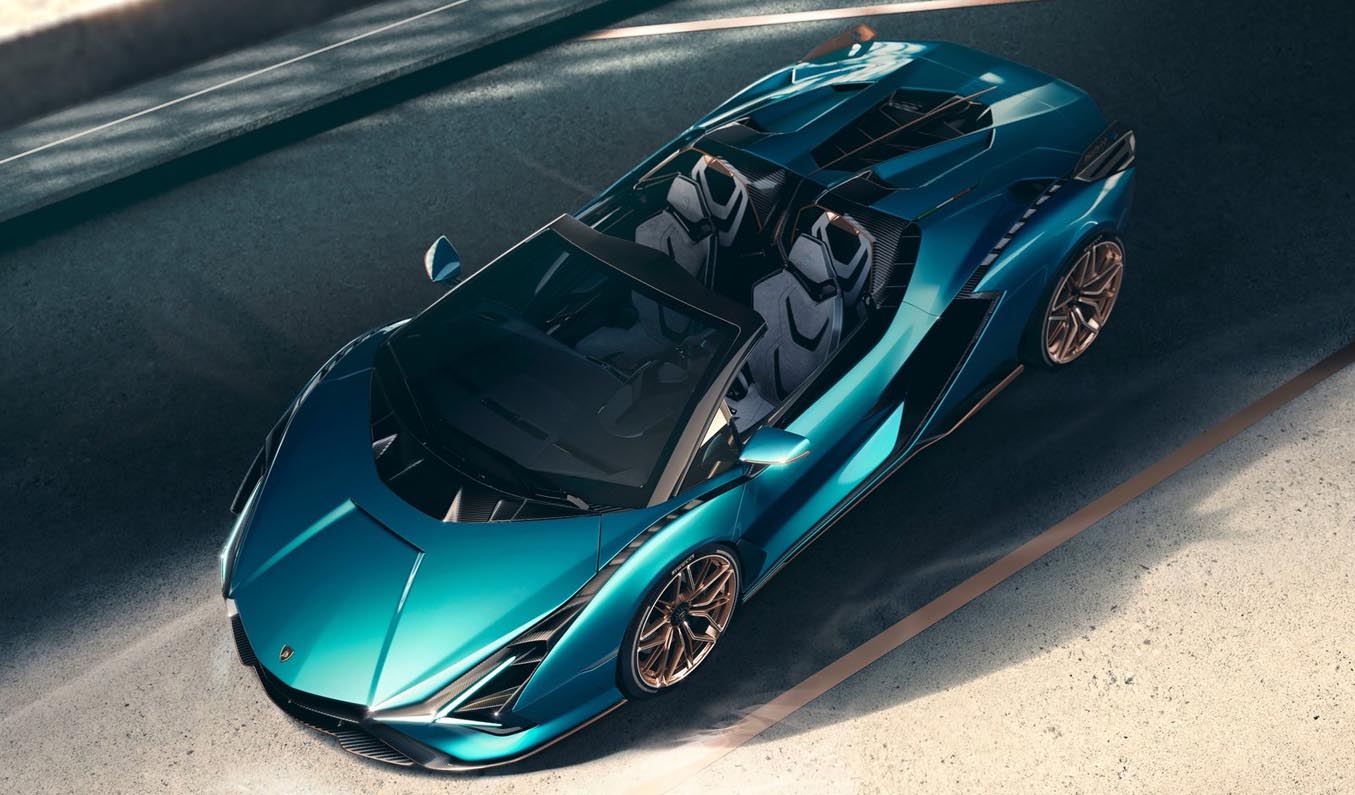 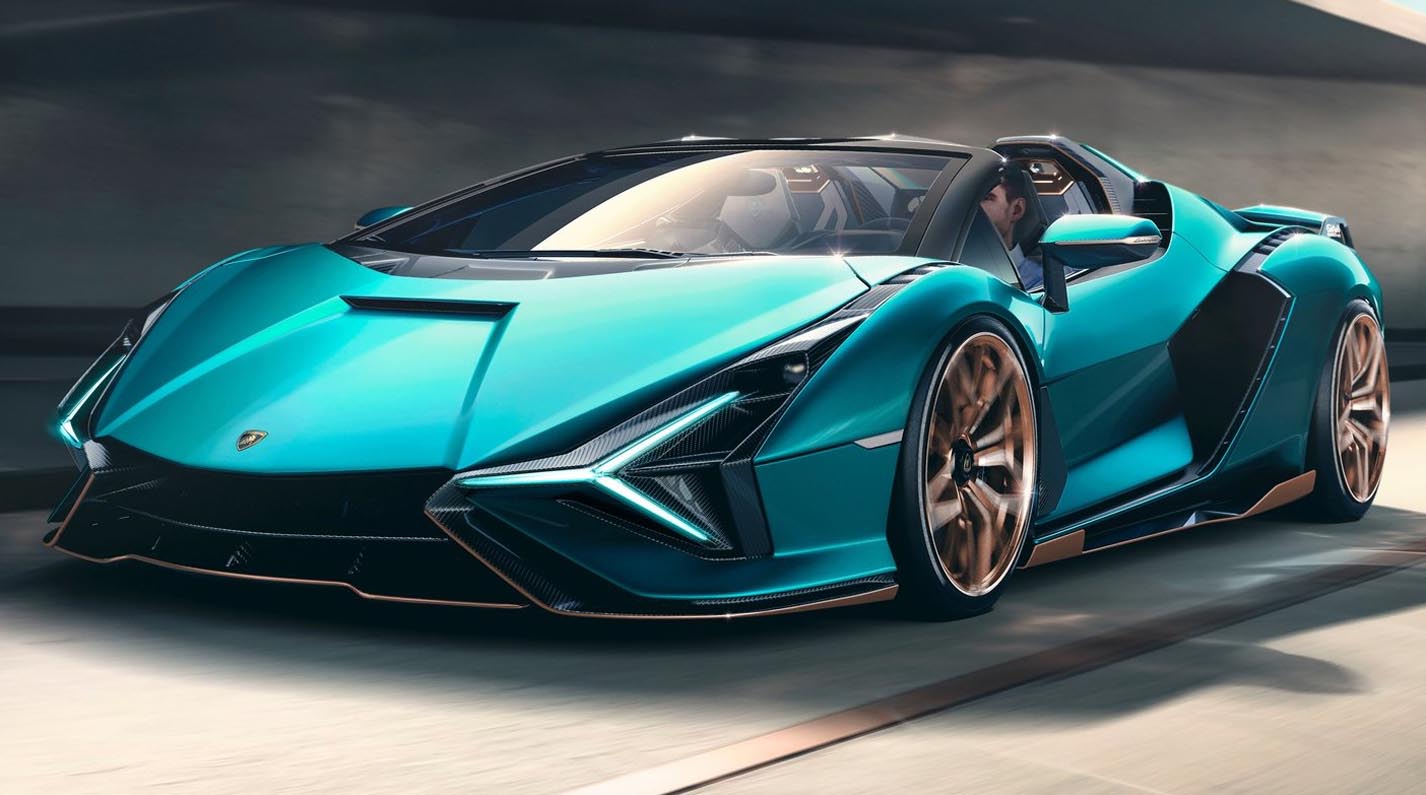 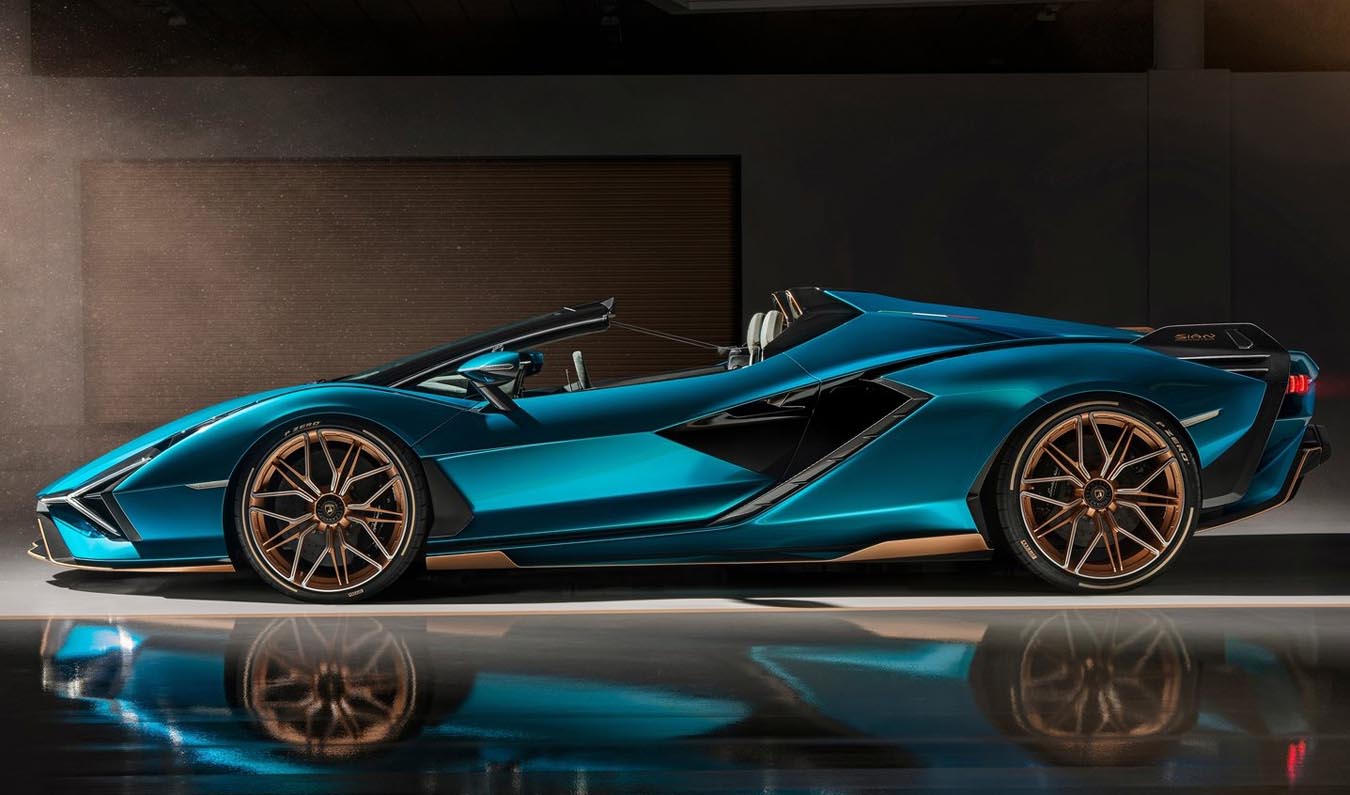 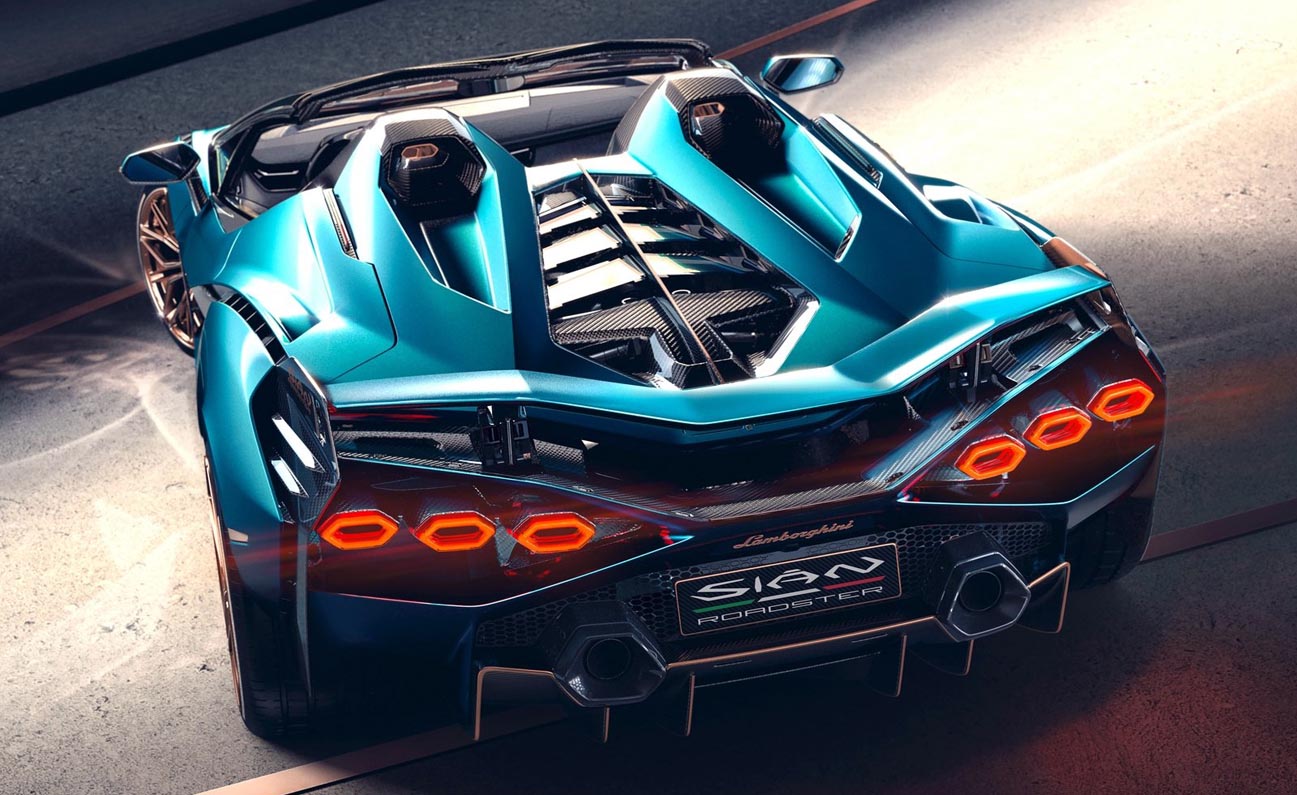 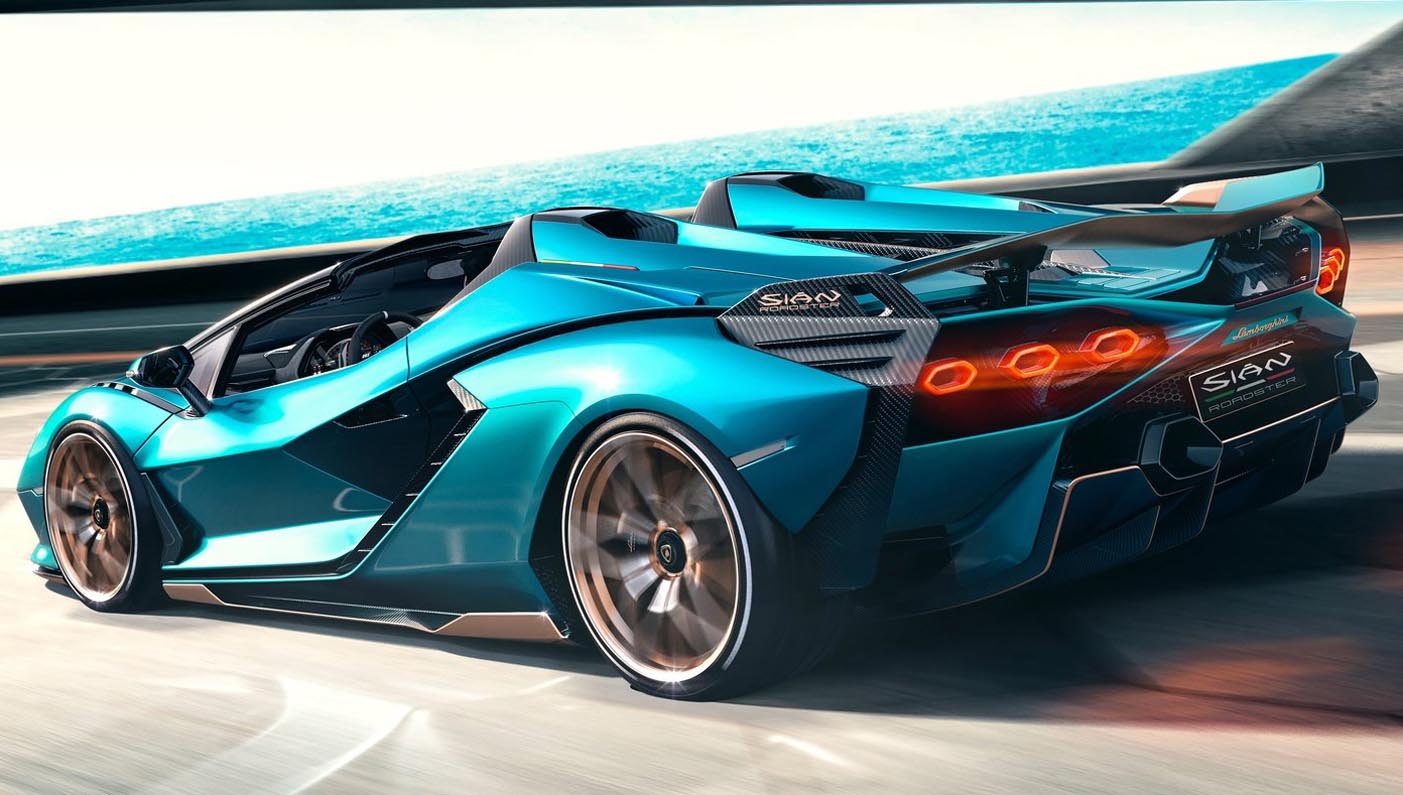 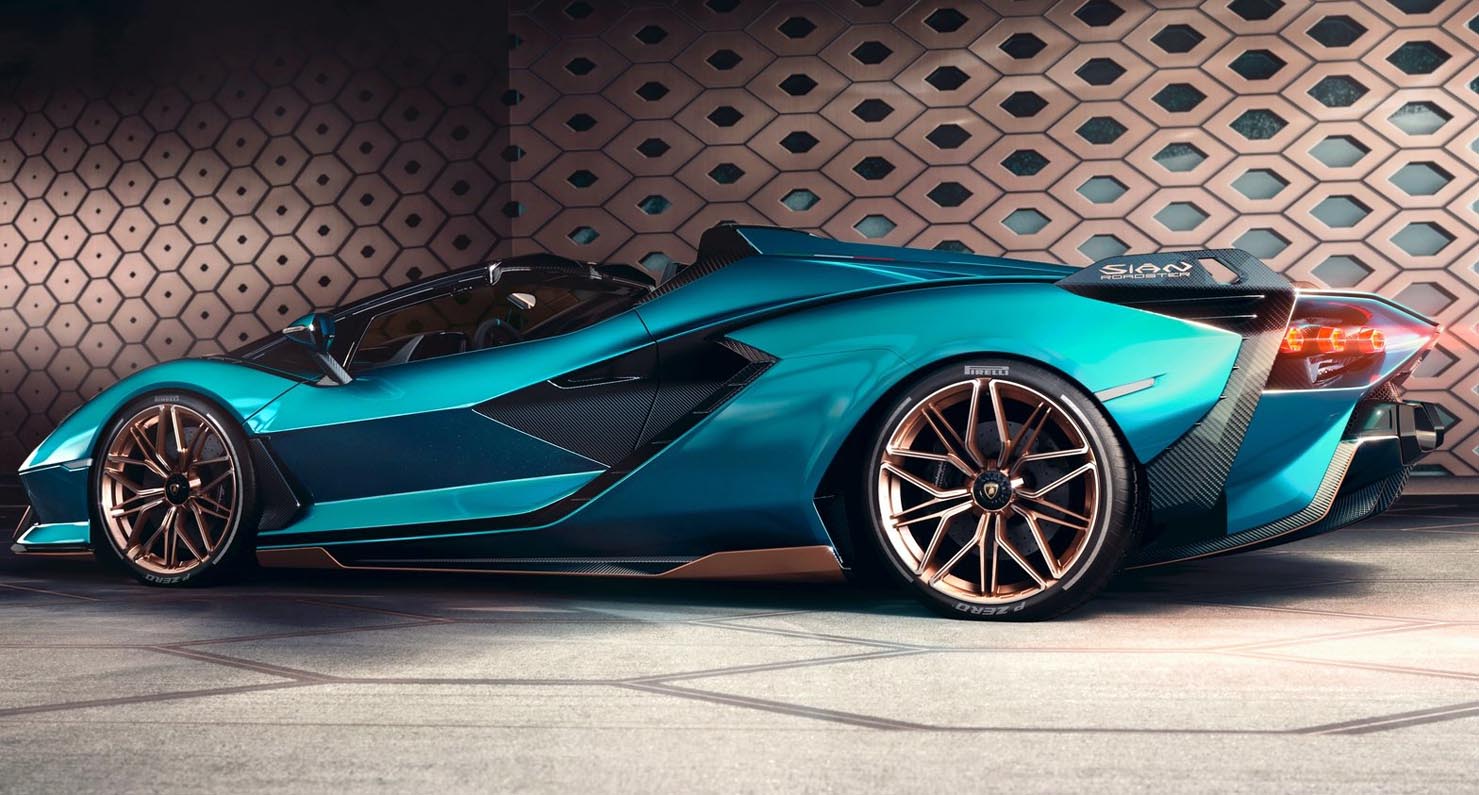 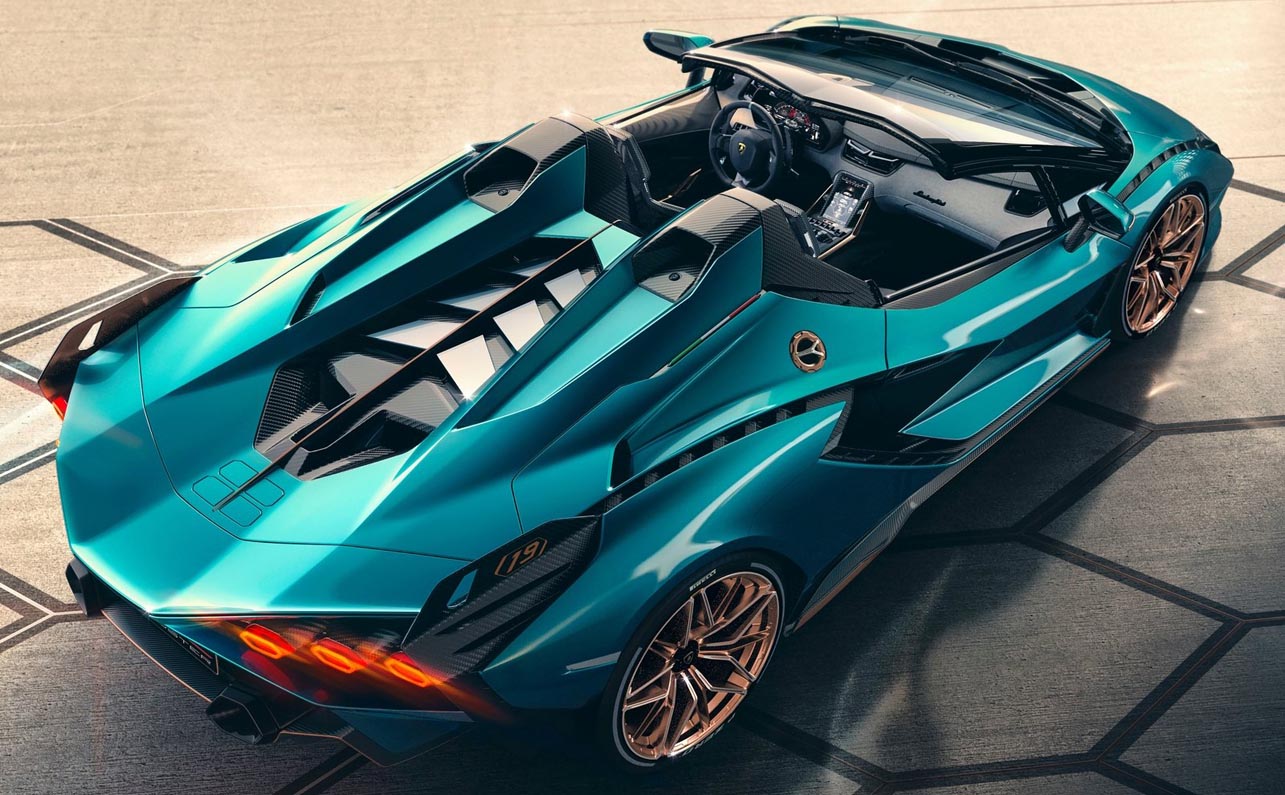 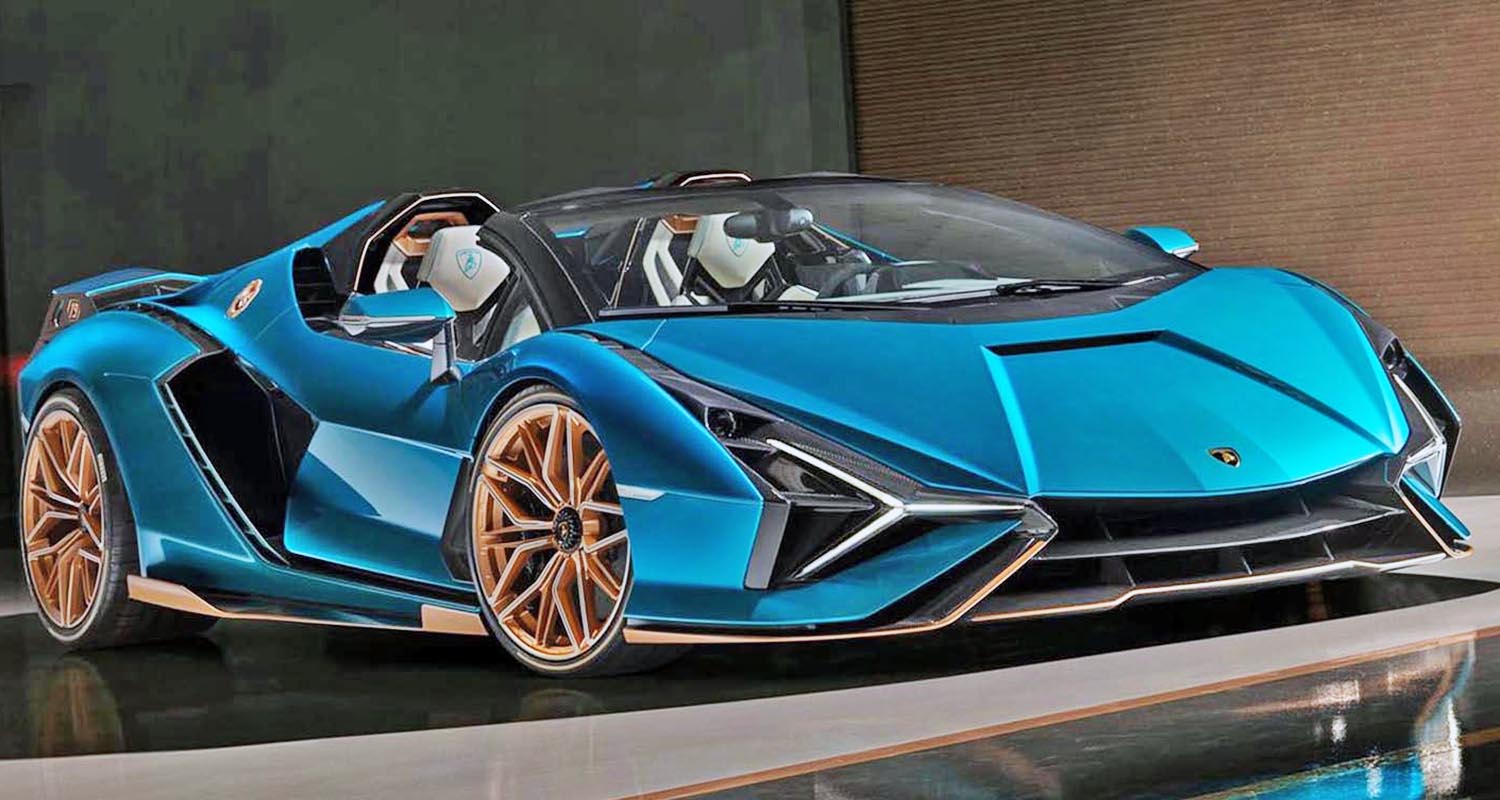 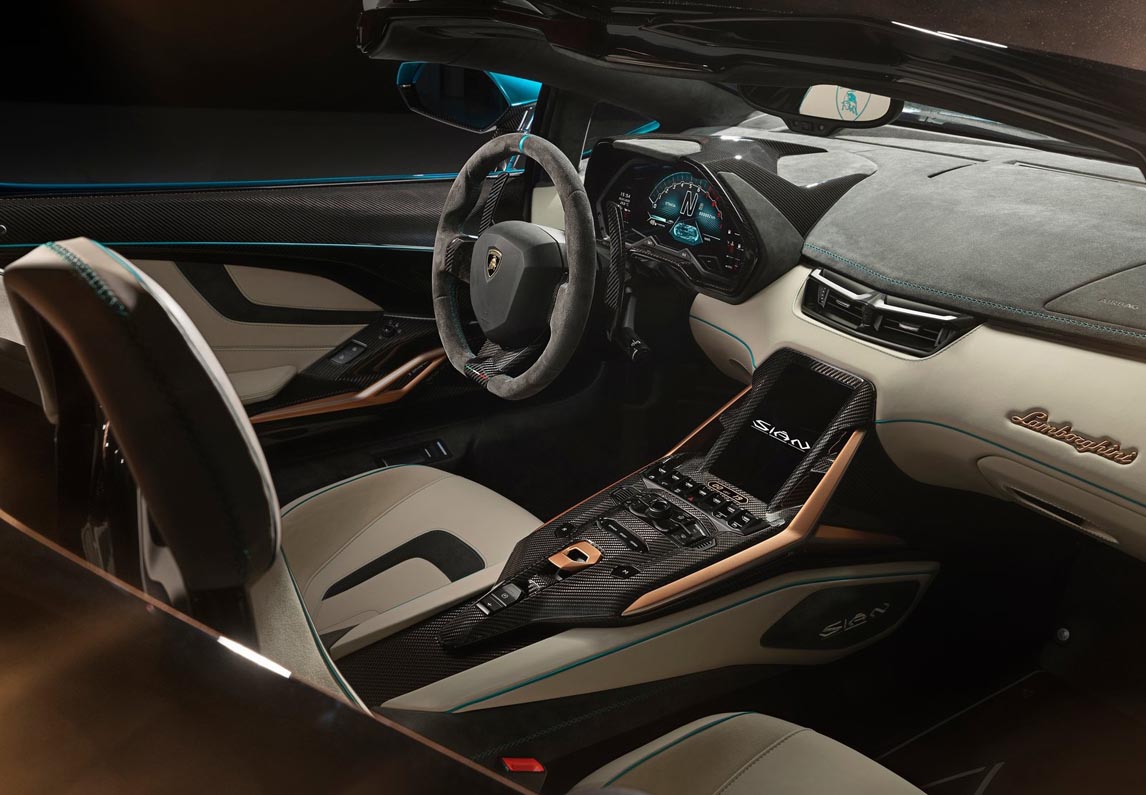 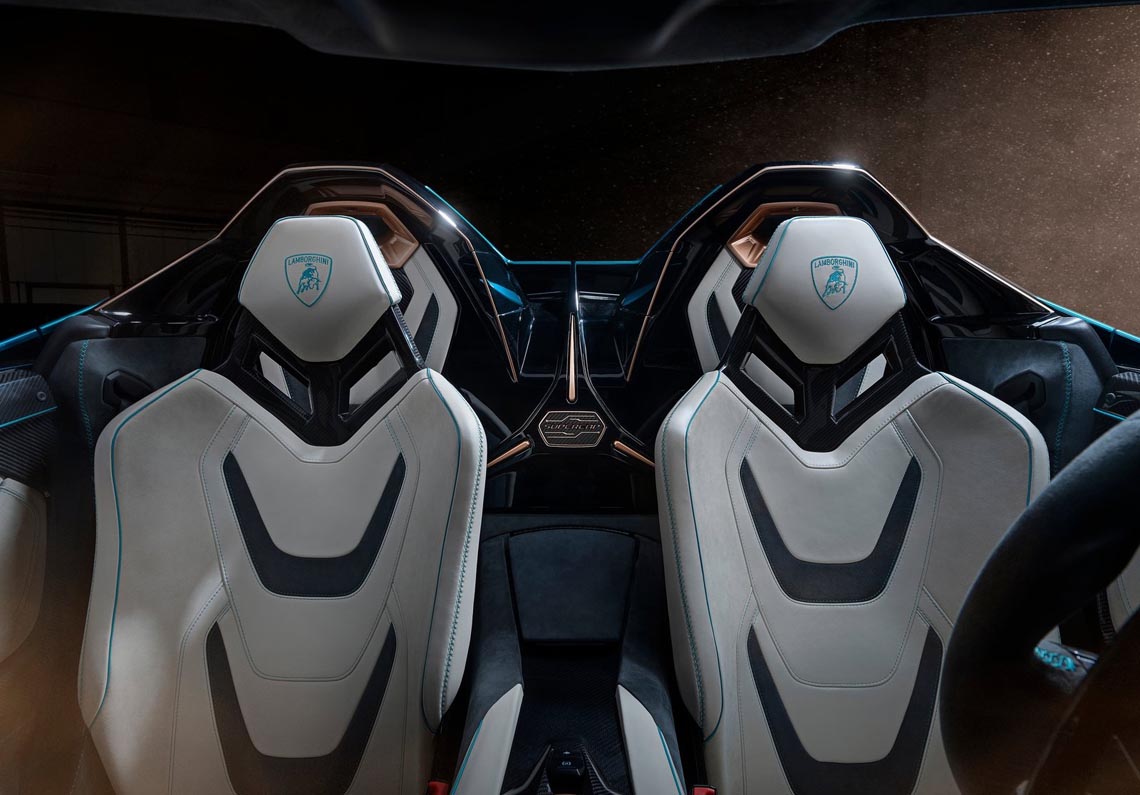