Gross Total Weight Of 40 Tons: The Battery-Powered Mercedes-Benz EActros Now On The Road In The Northern Black Forest With A Trailer 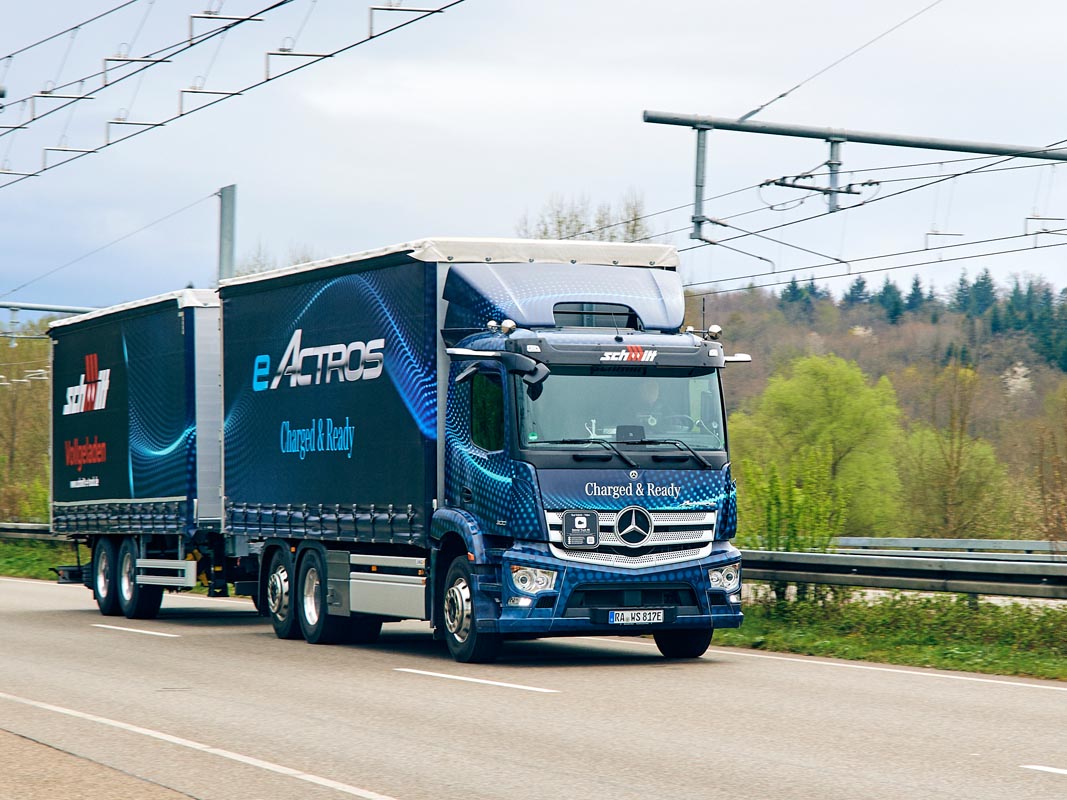 Mercedes-Benz Trucks has launched a new phase of practical tests for the eActros at Logistik Schmitt in the northern Black Forest: The battery electric eActros has now been approved as a truck-and-trailer combination with a total weight of 40 tons. The combination has been handed over to Logistik Schmitt for endurance testing. The vehicle is already available to order for customers in this configuration. Since the start of testing in 2019, the eActros has covered more than 70,000 kilometers on more than 7,000 trips. As part this process, it will continue to transport transmission housings and axle components to Daimler Truck plants in Rastatt and Gaggenau as part of a three-shift schedule, covering up to 300 km daily in the process.

Steffen Maier, Head of Customer Testing, Mercedes-Benz Trucks: “Starting an intensive exchange with customers at an early stage is an integral part of our vehicles’ development. For this reason, our team has been supporting the practical stage of eActros testing at Logistik Schmitt since 2019. Following the successful launch of series production last October, we are now gradually expanding the range of applications for the eActros. We are looking forward to intensive tests with the battery electric truck-and-trailer combination in the northern Black Forest.”

Rainer Schmitt, Managing Partner at Logistik Schmitt: “The eActros as a truck-and-trailer combination is ideal for our purposes. In combination with the trailer, the electric truck now not only offers a higher total weight, but also significantly more transport volume. This means we can transport twice as many load carriers on the same trips.”

Trailer operation for the battery-powered eActros

According to legislation, in order to tow trailers over 10 tons, tractor vehicles of heavy-duty truck-and-trailer combinations must feature a continuous braking system. In the eActros, this continuous brake system is provided by a trailer brake (High Power Brake Resistor or HPR for short) for battery electric vehicles. At Logistik Schmitt, the eActros 300 (6×2), designed for operation with a trailer, comes equipped with a center-axle Rockinger trailer coupling. The accompanying trailer is a center-axle trailer with a Junge curtainsider body. With an internal length of 7280 mm it boasts a permissible gross weight of 18 tons.

The batteries of the eActros comprise either three (eActros 300) or four battery packs (eActros 400), each of which offers an installed capacity of 112 kWh[1] and a usable capacity of around 97 kWh[2]. With four battery packs, the eActros 400 has a range of up to 400 kilometers[3]. The technological centerpiece is the drive unit – an electric rigid axle with two integrated electric motors and a two-speed transmission. Both liquid-cooled motors generate a continuous output of 330 kW as well as a top performance of 400 kW. In addition, when driving with foresight, electrical energy can be recovered through recuperation. The energy gained when braking is fed back into the batteries of the eActros, and is then once more available for driving. The eActros can be charged with up to 160 kW:  Three battery packs require just over an hour to charge from 20 to 80 percent at a standard DC fast charging station generating a charging current of 400 A[4].

Daimler Truck is also planning a comparison of concepts within the region, with the fully battery-electric eActros, which is in use at Logistik Schmitt, going head-to-head with the “eWayBW” project’s overhead-line trucks –  Daimler Truck has no plans for overhead-line trucks itself, as the company’s strategy is focused on both battery and hydrogen-powered vehicles: flexible drive technologies that are locally carbon-neutral. As a result, Daimler Truck can cover all its customers’ uses, providing full flexibility in terms of routes.

[1] Nominal capacity of new battery, based on internally defined boundary conditions, may vary depending on use case and ambient conditions.

[2] Energy available for regular truck operation with new batteries. Based on internally defined boundary conditions, may vary depending on use case and ambient conditions.

[3] The range was determined internally in optimum conditions, including 4 battery packs after preconditioning in partially loaded distribution traffic without a trailer at 20 °C outside temperature.

[4] Based on internally determined empirical values under optimal conditions, including an ambient temperature of 20°C. 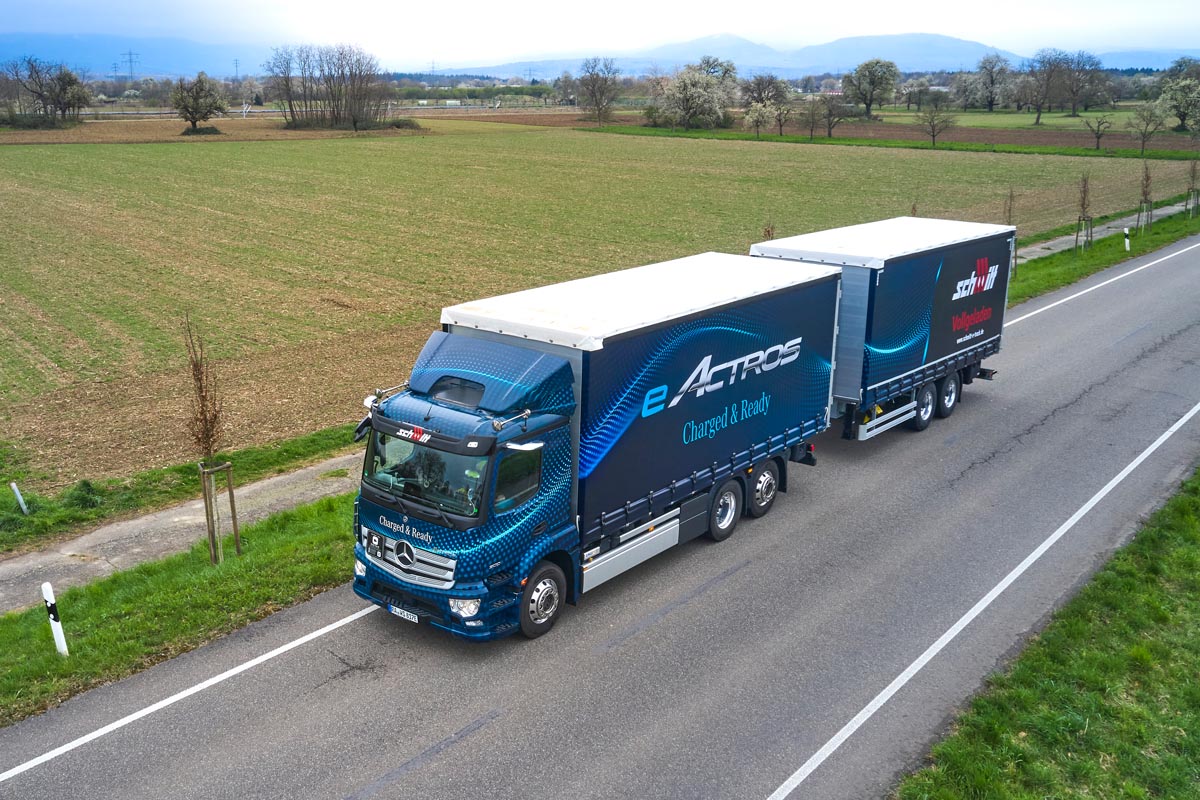 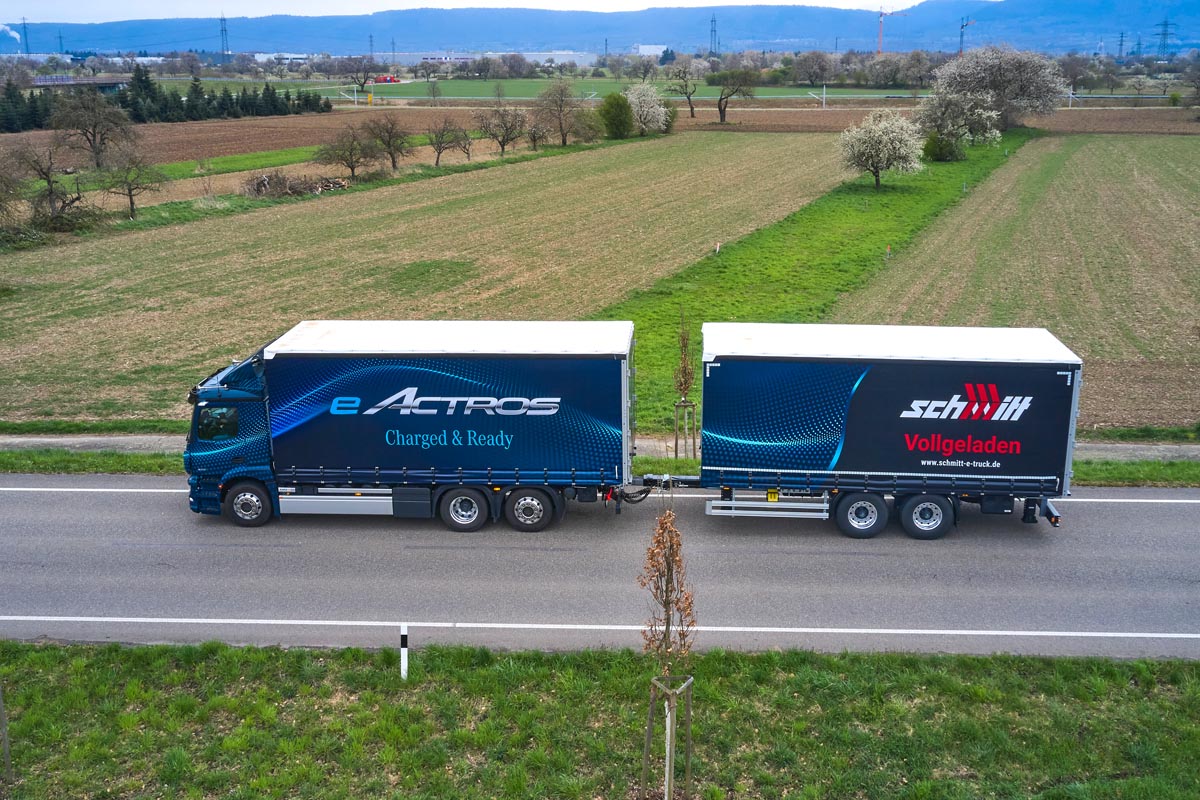 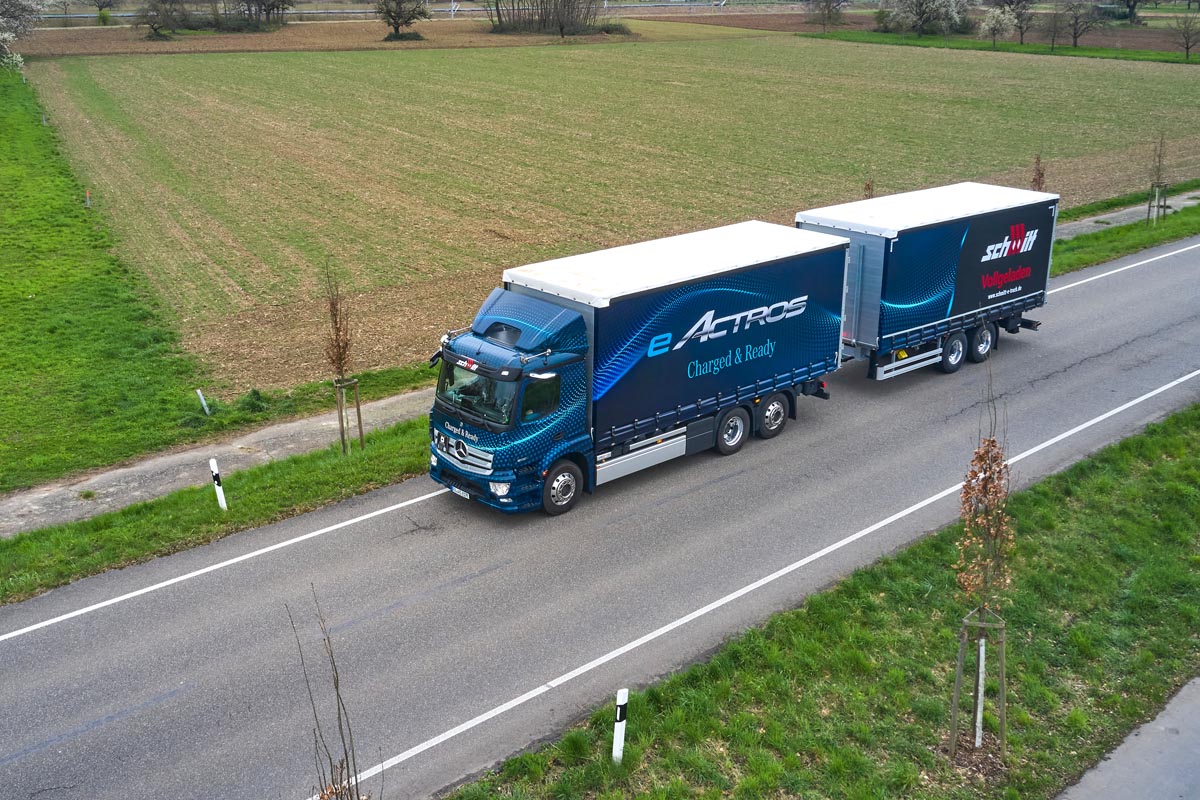 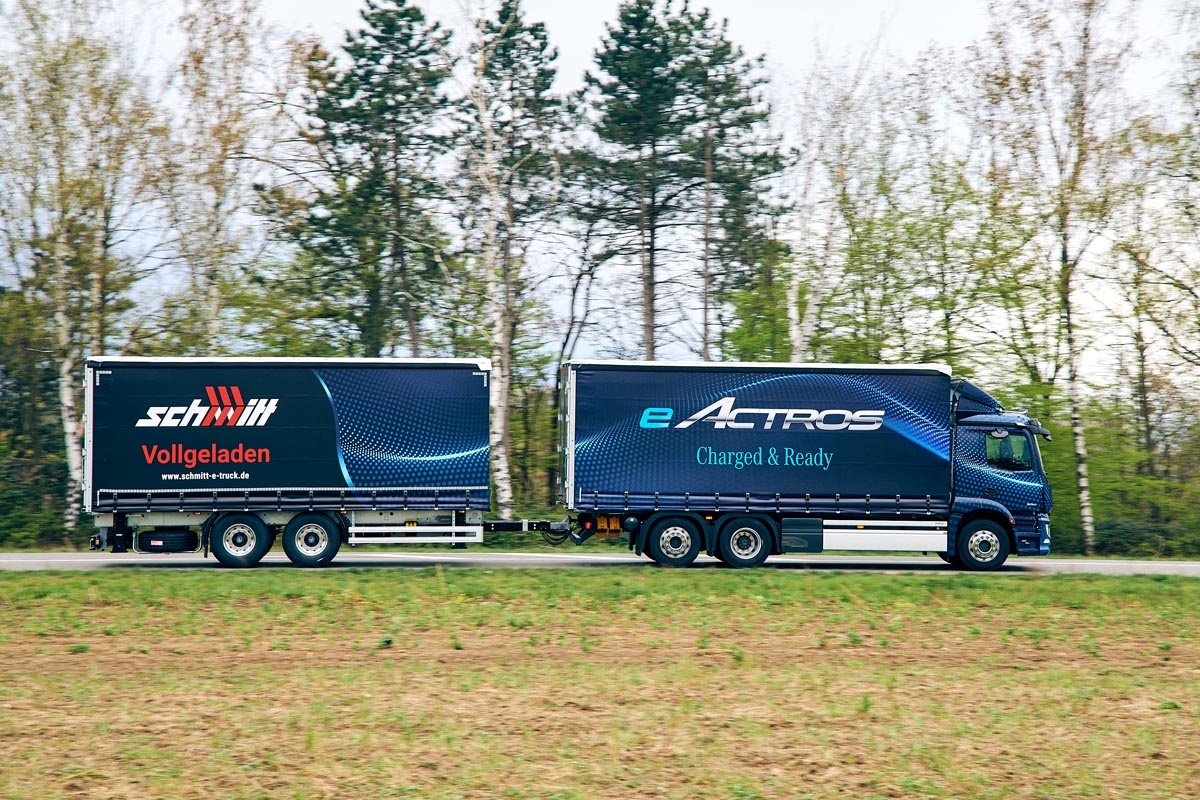 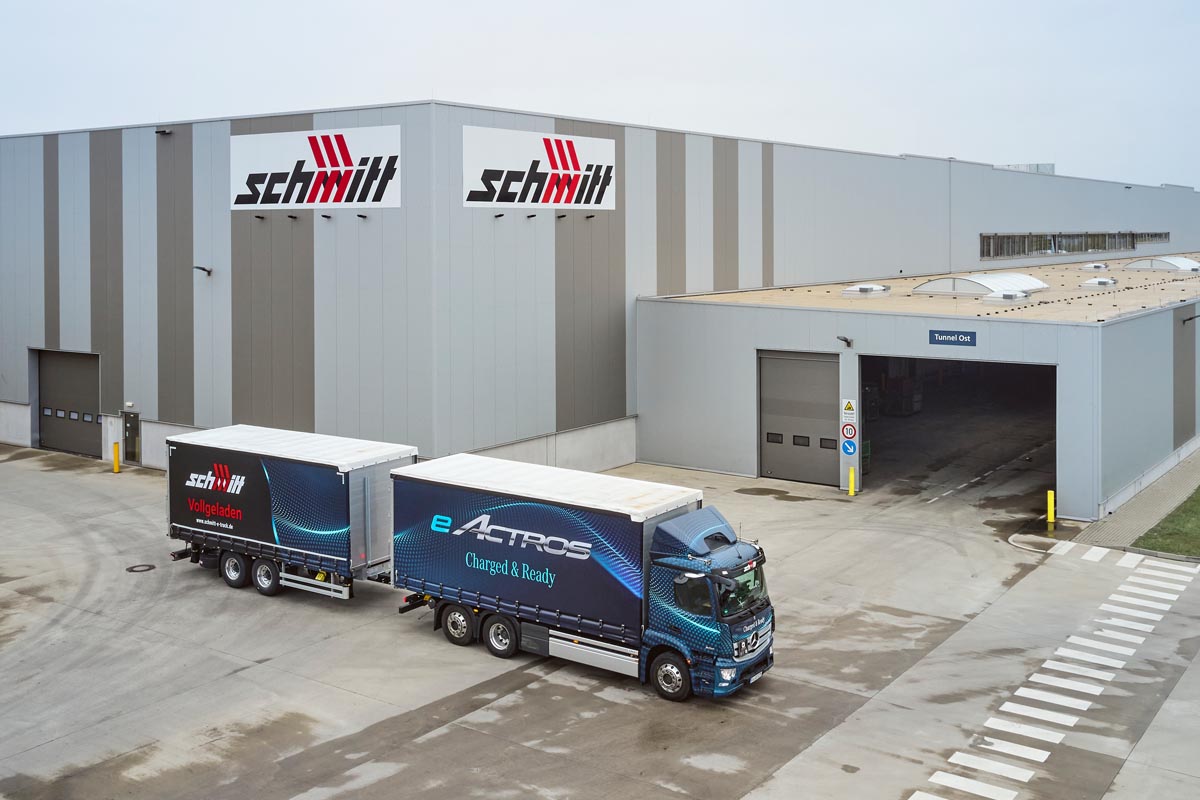 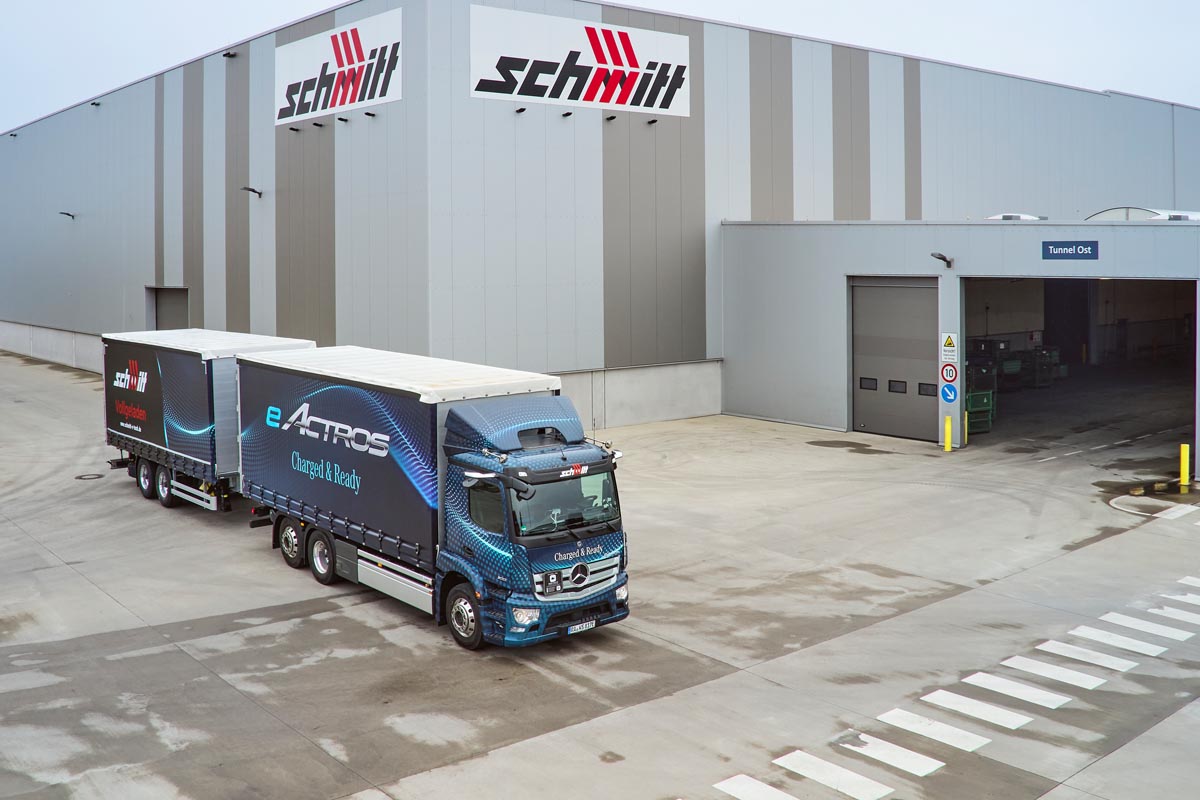 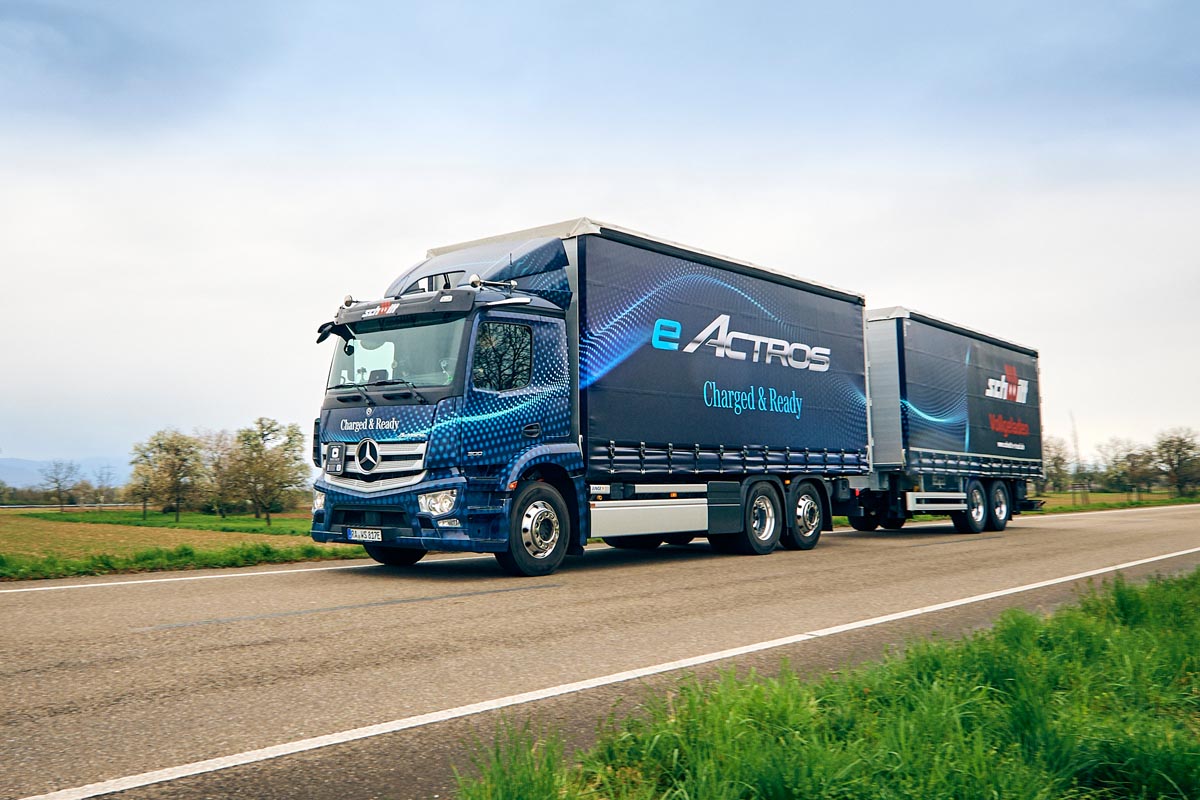 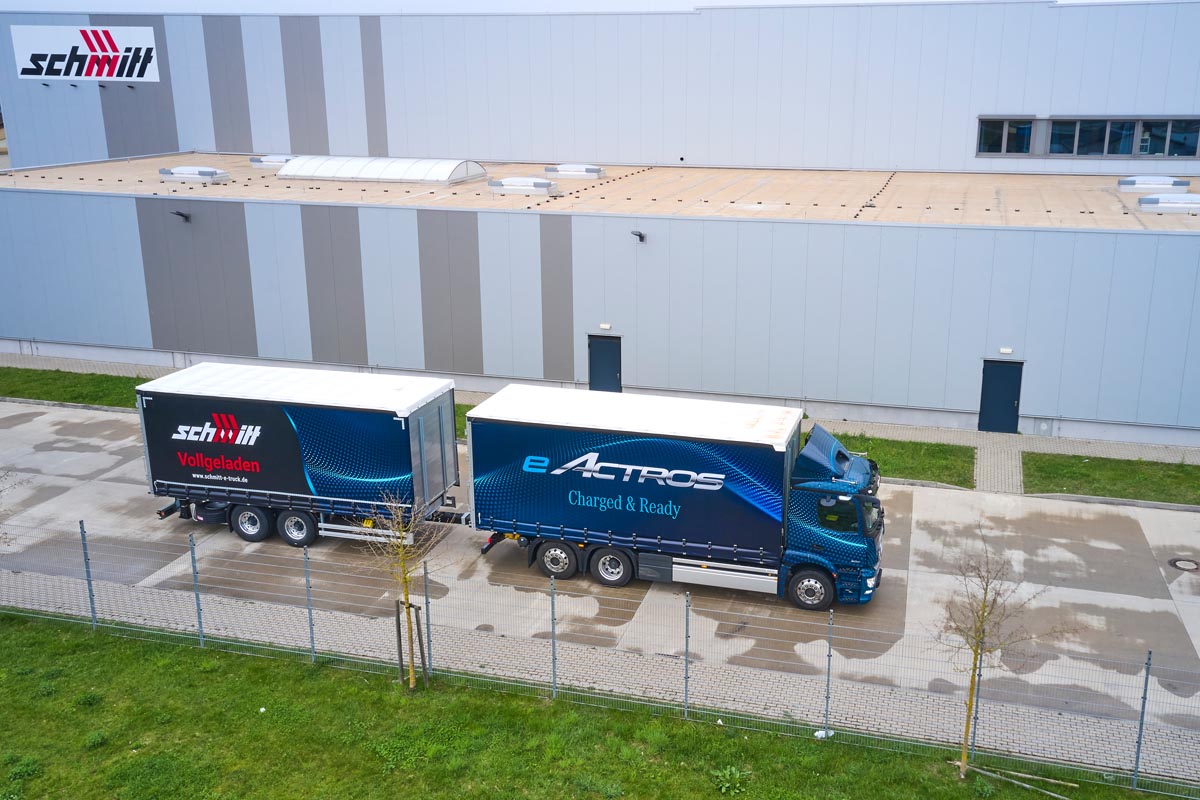 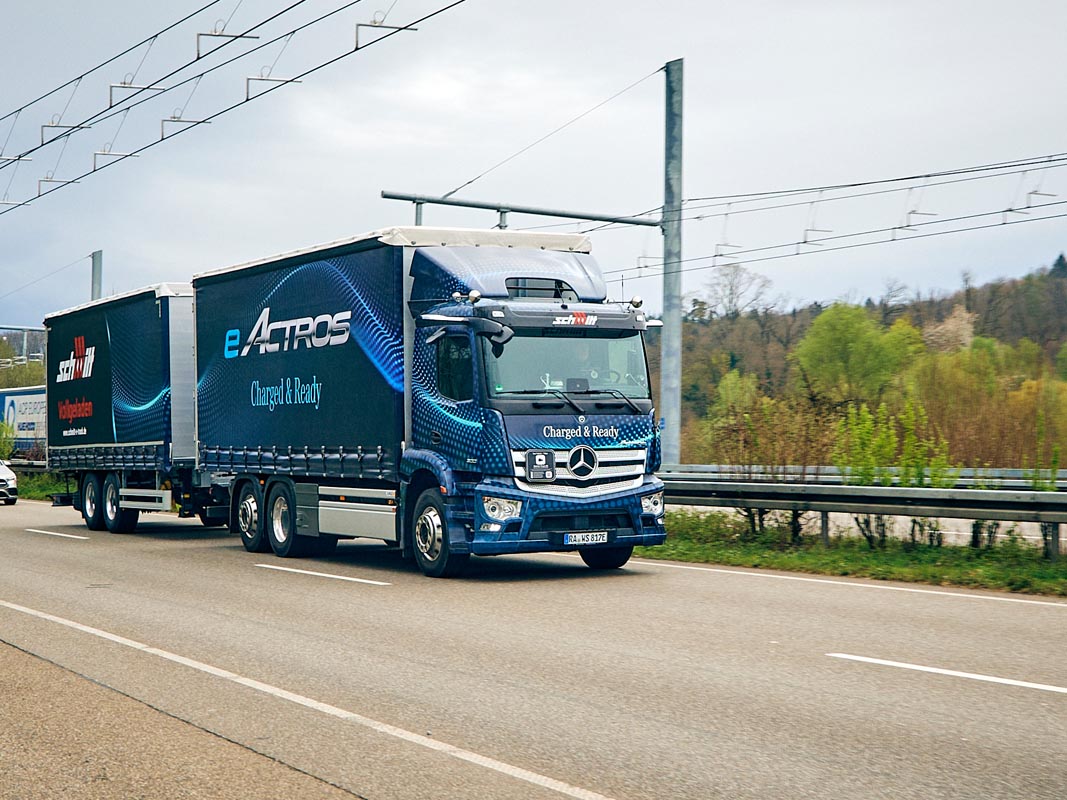 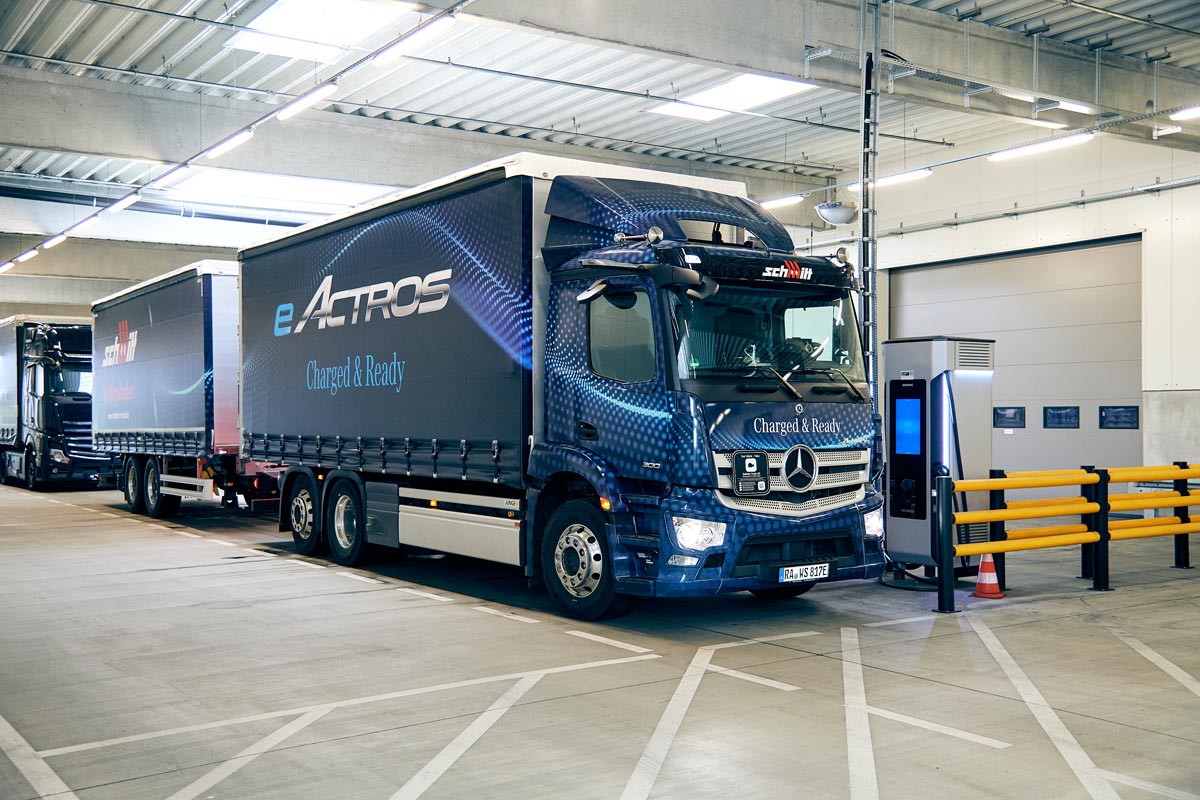 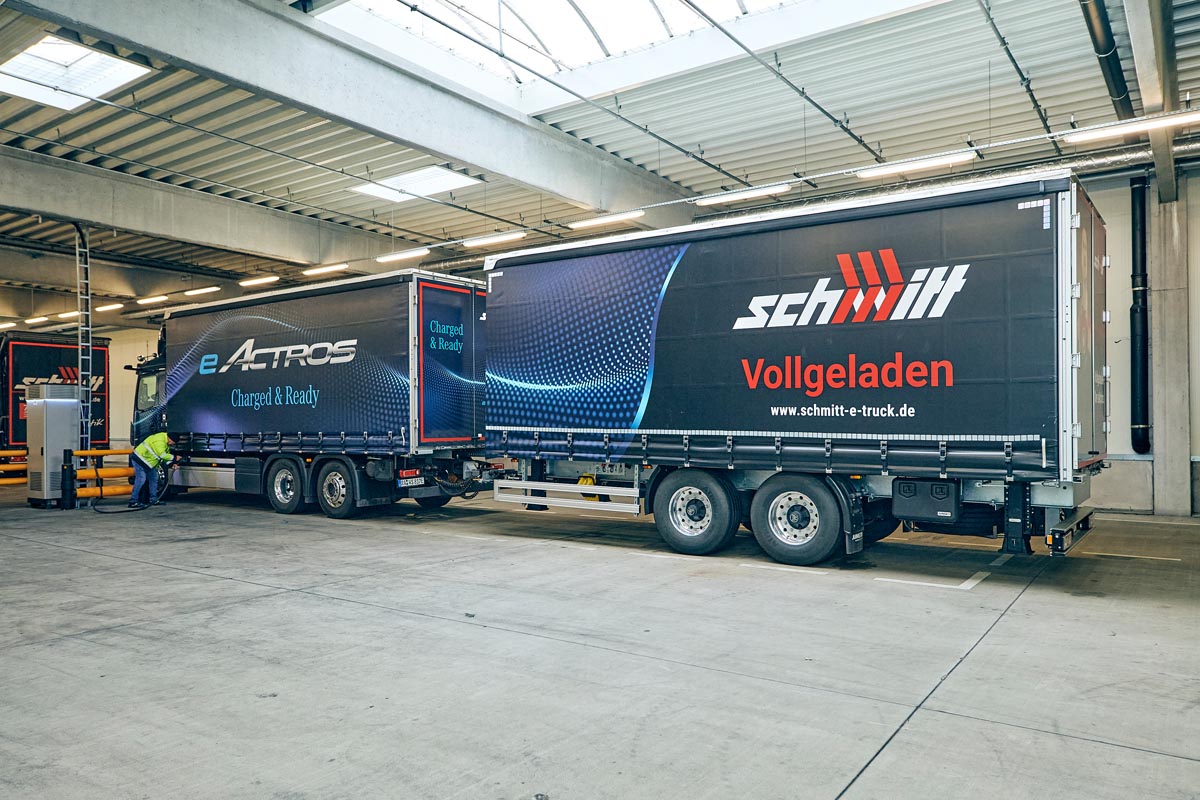 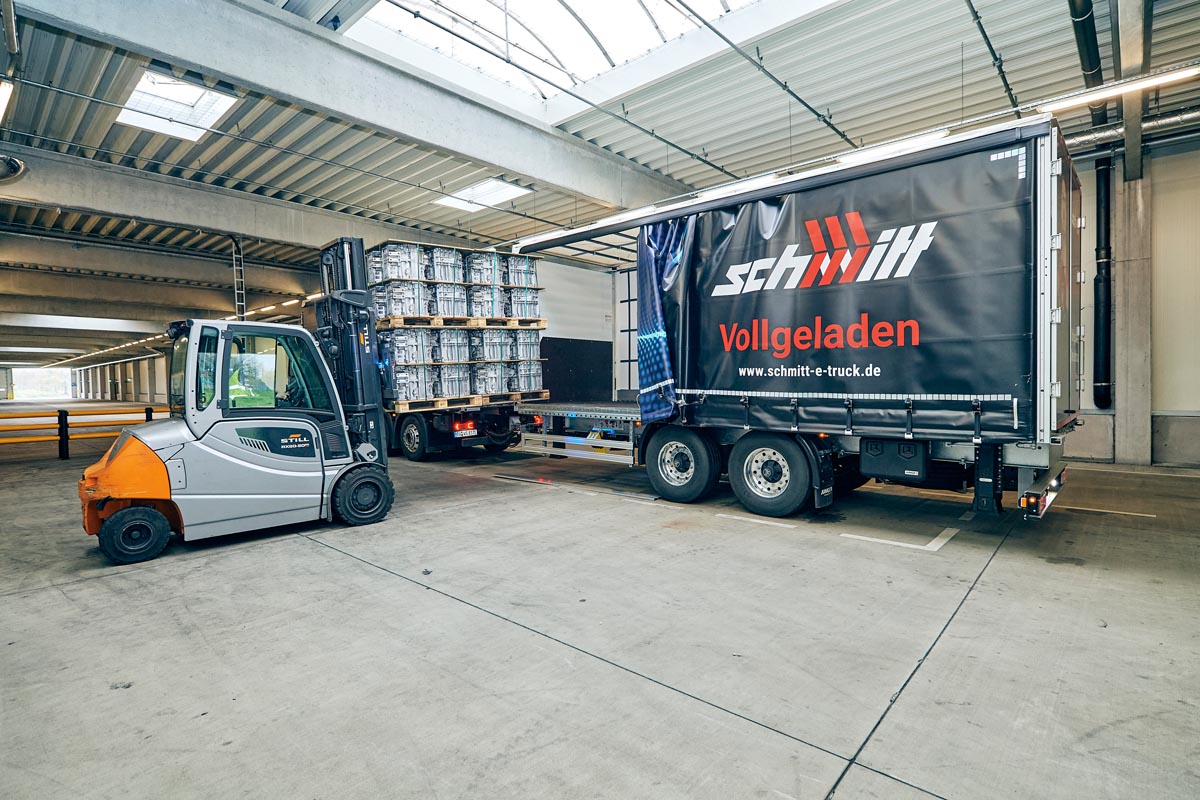 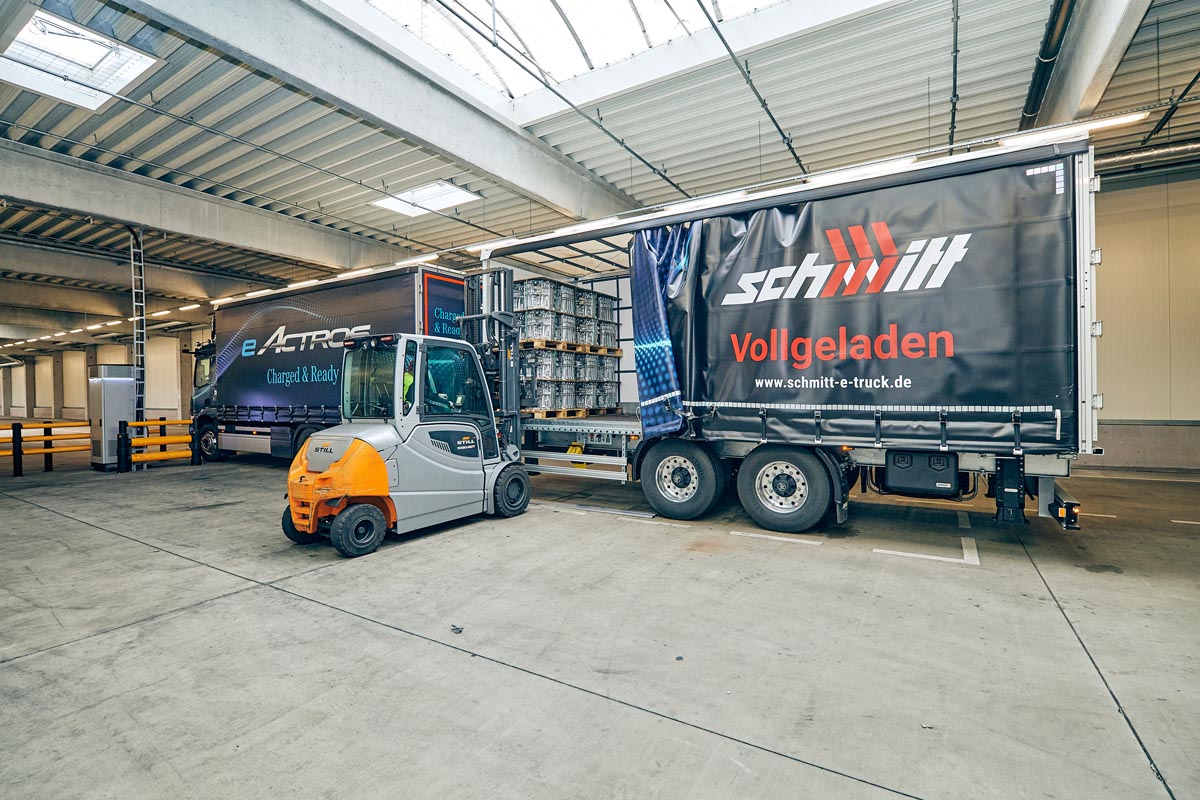 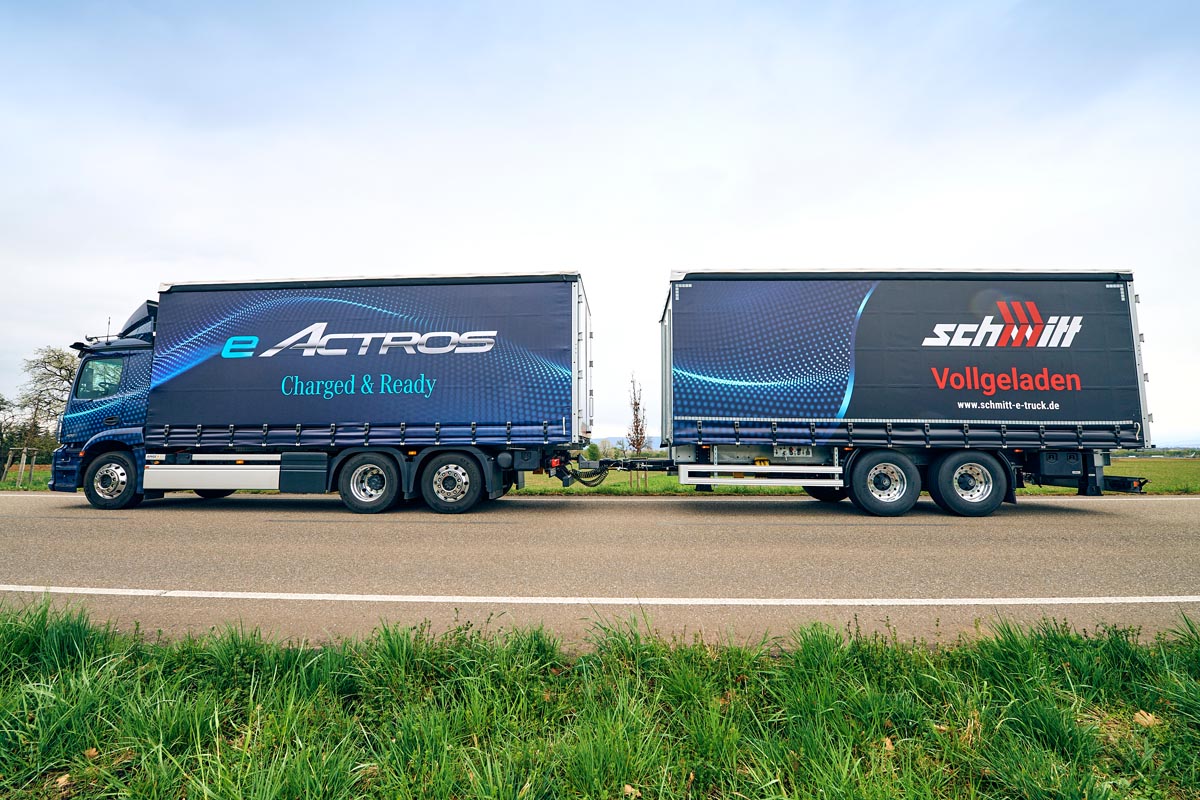