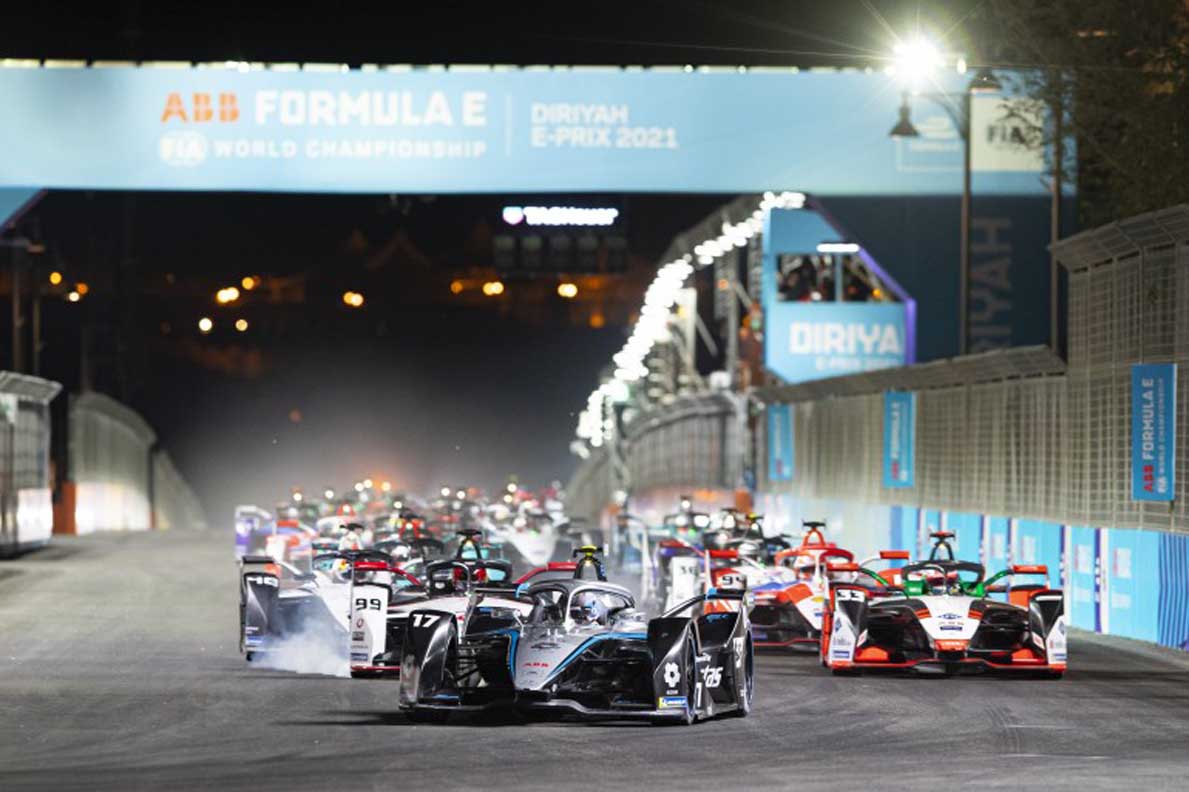 Sam Bird has made a habit of winning at least one race in every ABB FIA Formula E World Championship season to-date, and in Saudi Arabia today (27 February), the Briton upheld that tradition in only his second start for Jaguar Racing, fighting his way to victory at the scene of his most recent triumph in the series 15 months earlier.

Bird began the second floodlit Diriyah E-Prix around the Riyadh Street Circuit from third place on the grid, directly behind first-time pole-sitter Robin Frijns (Envision Virgin Racing). For the opening two-thirds of the race, the pair engaged in a tense cat-and-mouse duel, with the Jaguar driver shadowing his former team-mate before finally making a move stick with the benefit of Attack Mode.

Thereafter, Bird made the most of his superior energy management to pull away and was comfortably in control when the action was red-flagged with just under three minutes remaining.

The result marked the 34-year-old’s tenth Formula E success and elevates him to second both on the all-time leaderboard and in the current championship standings – a welcome tonic after failing to score yesterday.

In a race that was dramatic and entertaining in equal measure, Frijns held on to claim the runner-up spoils, although the Dutchman was likely relieved to see the red flag emerge after finding his mirrors full of the marauding DS TECHEETAHs in the closing stages.

Indeed, Jean-Éric Vergne and defending champion António Félix da Costa could arguably have hoped for better than third and fourth, had they not indulged in a wheel-banging internecine scrap that cost both drivers crucial time.

From seventh on the grid, Vergne was the main man on the move, battling his way past Blomqvist (NIO 333), Nico Müller (Dragon/Penske Autosport), Oliver Turvey (NIO 333) and the second Dragon/Penske Autosport car of Sérgio Sette Câmara – with da Costa generally wasting little time in following his team-mate’s example.

There would be, however, a subsequent sting in the tail for Vergne, as failure to deploy his second Attack Mode – in company with three other drivers – resulted in a retrospective drive-through penalty that dropped him to 12th and promoted da Costa to the podium.

Front row sitter Sette Câmara conceded a position at the start and ran a lonely third until he was overhauled by the charging DS Techeetahs and – later on – impressive rookie Nick Cassidy. The New Zealander claimed a number of notable scalps on his way up the order from 11th on the grid to fourth in the final reckoning for Envision Virgin Racing, before getting a 24 seconds time penalty for exceeding the speed under Full Course Yellow.

Behind fourth-placed Sette Câmara, team-mate Müller came home fifth on a day that – although not quite living up to the promise of qualifying – nonetheless gave Dragon/Penske Autosport plenty of cause for encouragement.

Turvey made it a celebratory double points-scoring weekend for NIO 333 in sixth. The Briton confidently maintained his grid position of fourth early on ahead of stablemate Blomqvist, and whilst he faded slightly as the race wore on, for a team that failed to score at all in 2019/20, to leave Diriyah with nine points already in the bag represented a tremendous achievement.

Nissan e.dams’ Oliver Rowland wound up seventh, with Lucas Di Grassi (Audi Sport ABT Schaeffler), Friday’s winner and championship leader Nyck de Vries (Mercedes-EQ) and Pascal Wehrlein (TAG Heuer Porsche) completing the top ten, meaning 15 of the 24 drivers got their season off the mark over the course of the weekend – a sign that the seventh season of Formula E could well be the most fiercely-contested yet.

Yesterday’s second-place finisher Edoardo Mortara (ROKiT Venturi Racing) was unable to even start following his hefty free practice crash. Proof, if it were needed, that nothing can ever be taken for granted in Formula E – and that a thrillingly unpredictable campaign lies in-store…

The action will resume with round three – the Rome E-Prix in Italy – on Saturday, 10 April.

“I was a bit emotional in the car. It was a big move and a big step for me moving away from what was my family in Envision Virgin Racing to join Jaguar Racing, but they’ve welcomed me with open arms and I’m pleased to deliver this win. The whole point of the opening two rounds was to come here and score decent points and if you’d said I’d come away with 25 points, I’d have taken that. Robin was so respectful and a pleasure to race against which is exactly what you’d expect of his calibre. It was really, really good.”

« I’m really happy today, especially after having such a difficult day yesterday. The team did an amazing job to turn it all around. Hopefully we can keep this form for the rest of the season. We might need to keep working on the race pace as Jean-Eric and Antonio were closing on me towards the end. If we keep having good qualifying sessions, we are going to have a good season. It is always difficult to manage the energy. Sam had a very smart race, it was a shame that my second Attack Mode didn’t work out as I had planned and Sam took it later and overtook me in T18 and at that point I couldn’t defend. Energy played a big role as I felt I was constantly on the limit of overconsuming. Nick did a great job for his first race in Formula E, he is a great team-mate to have and I think he will be very good for the rest of the season. »

“It was a good performance and a good result today, we showed that we have the pace again and I am super pleased with that. It truly was a fun race, with amazing overtakes and a great recovery. This was our last time with the old car, for the next race we will have the new one, which is now ready, and I can’t wait to drive it!” 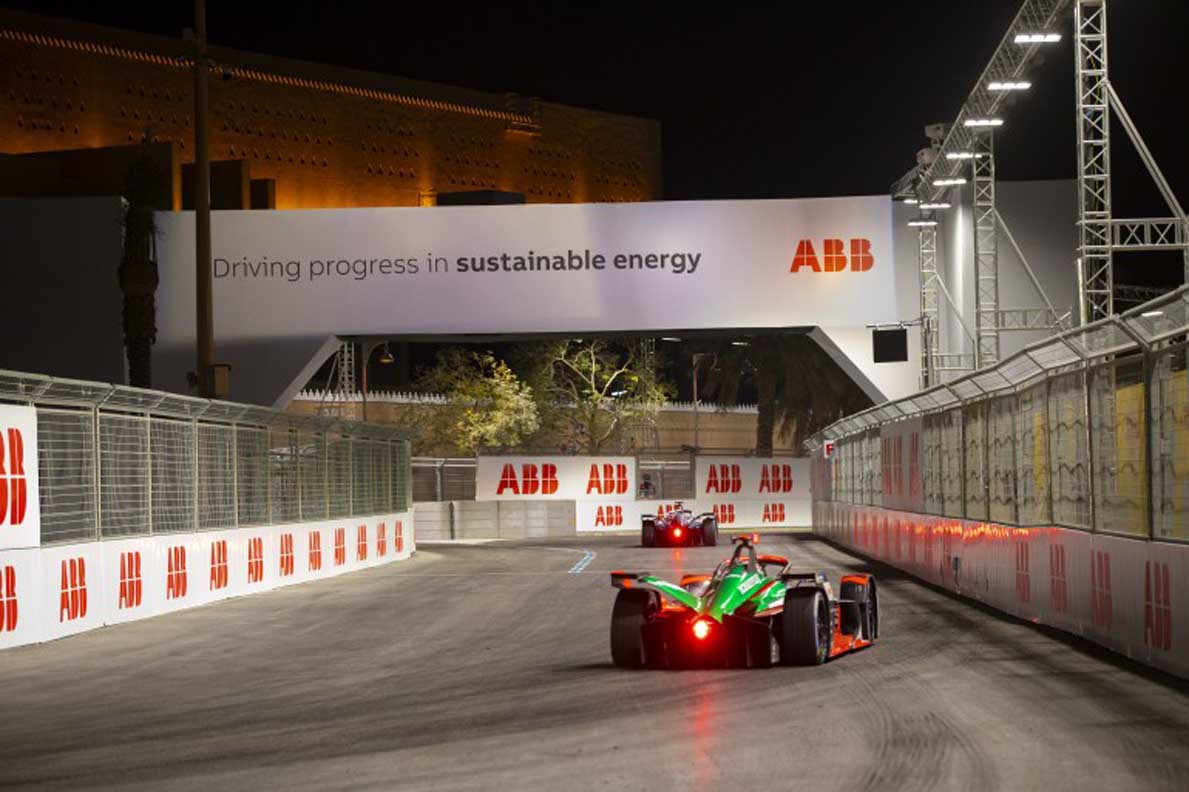 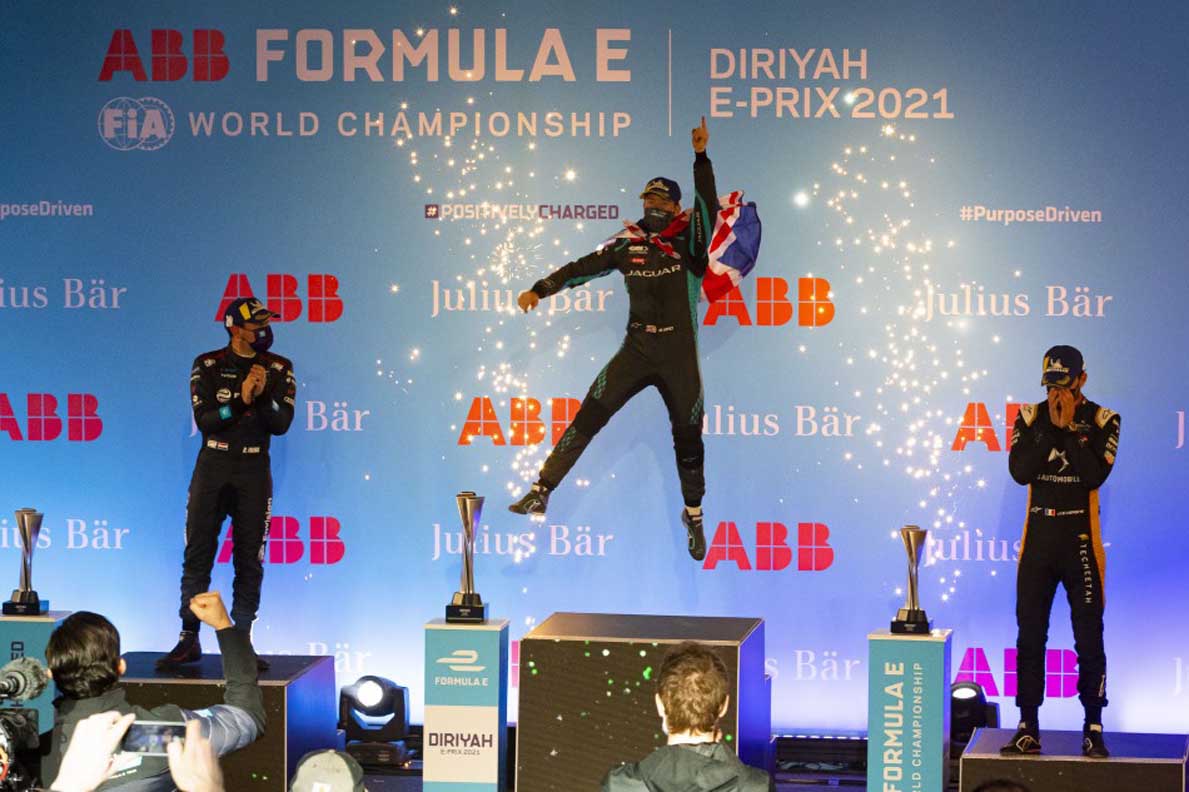 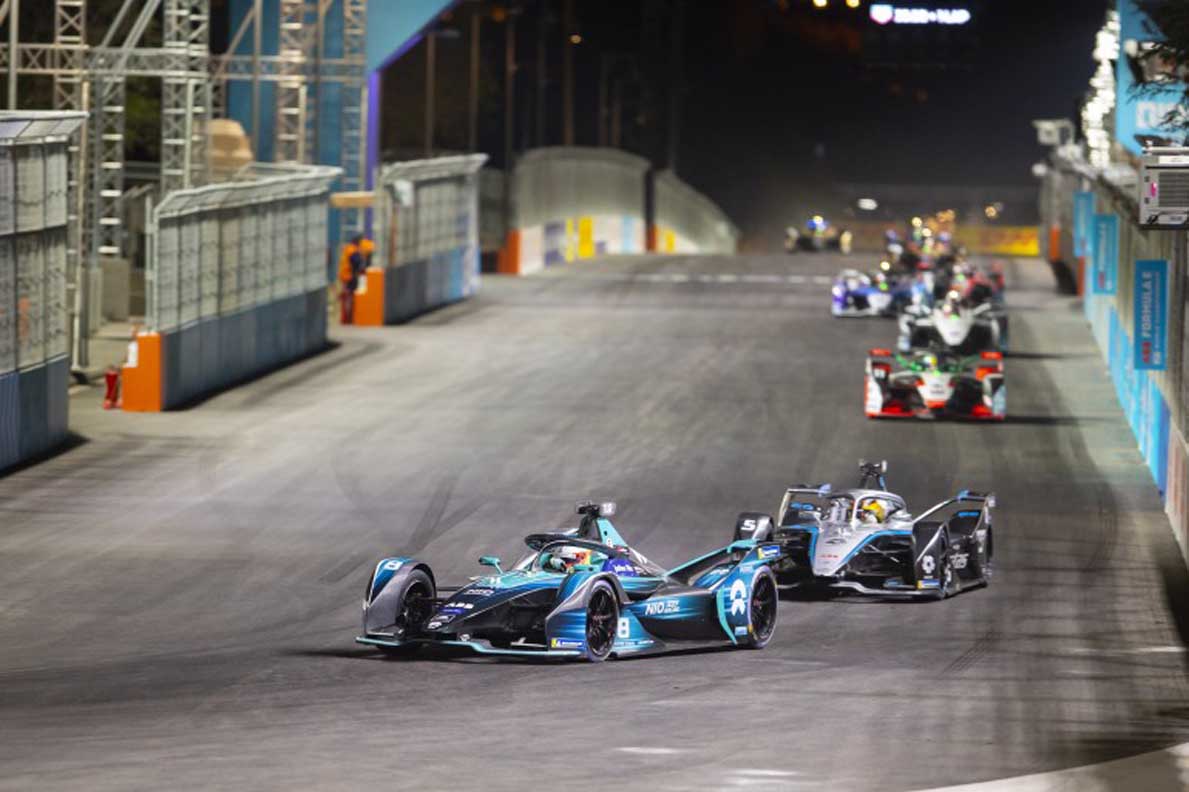 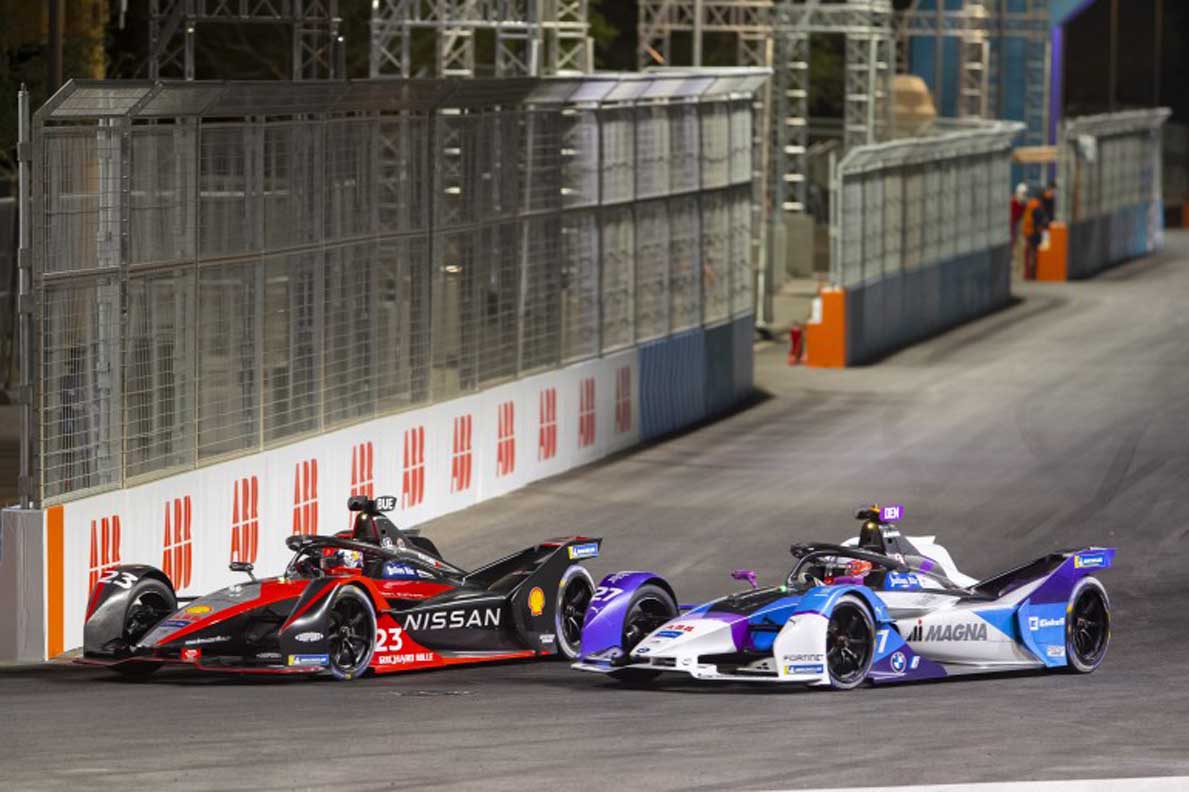 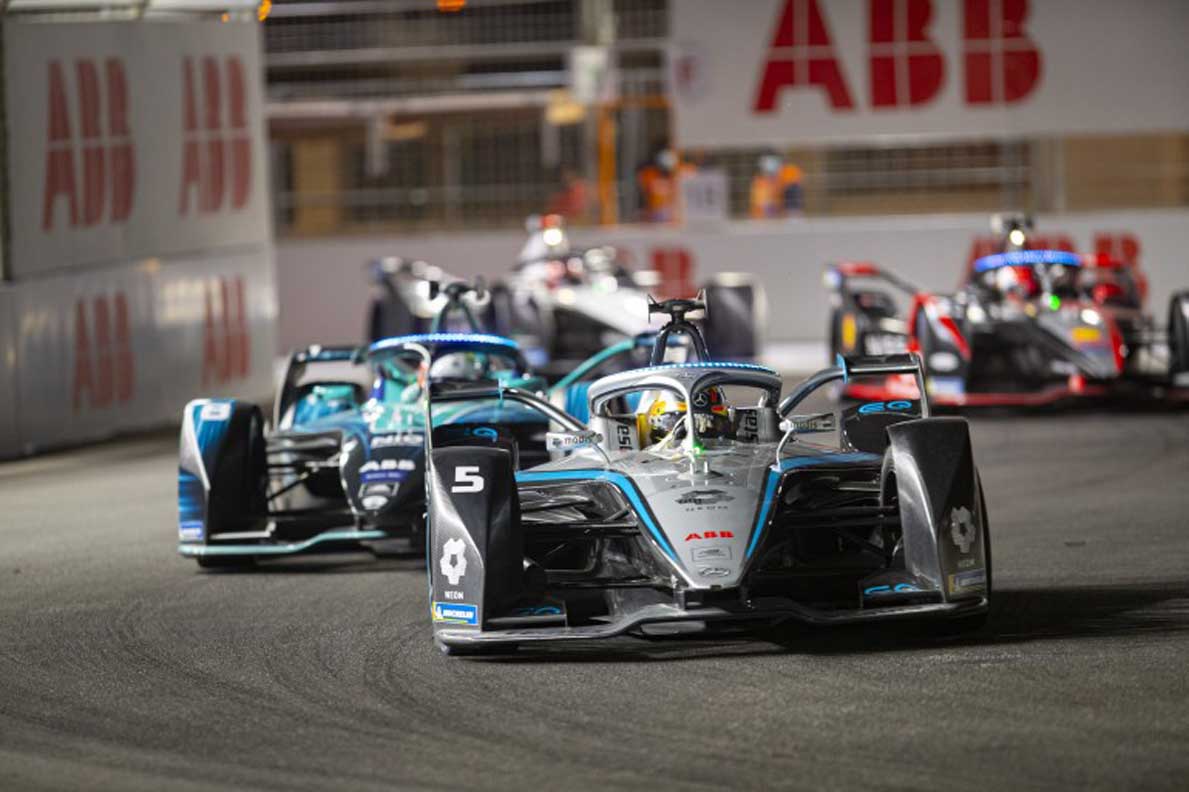