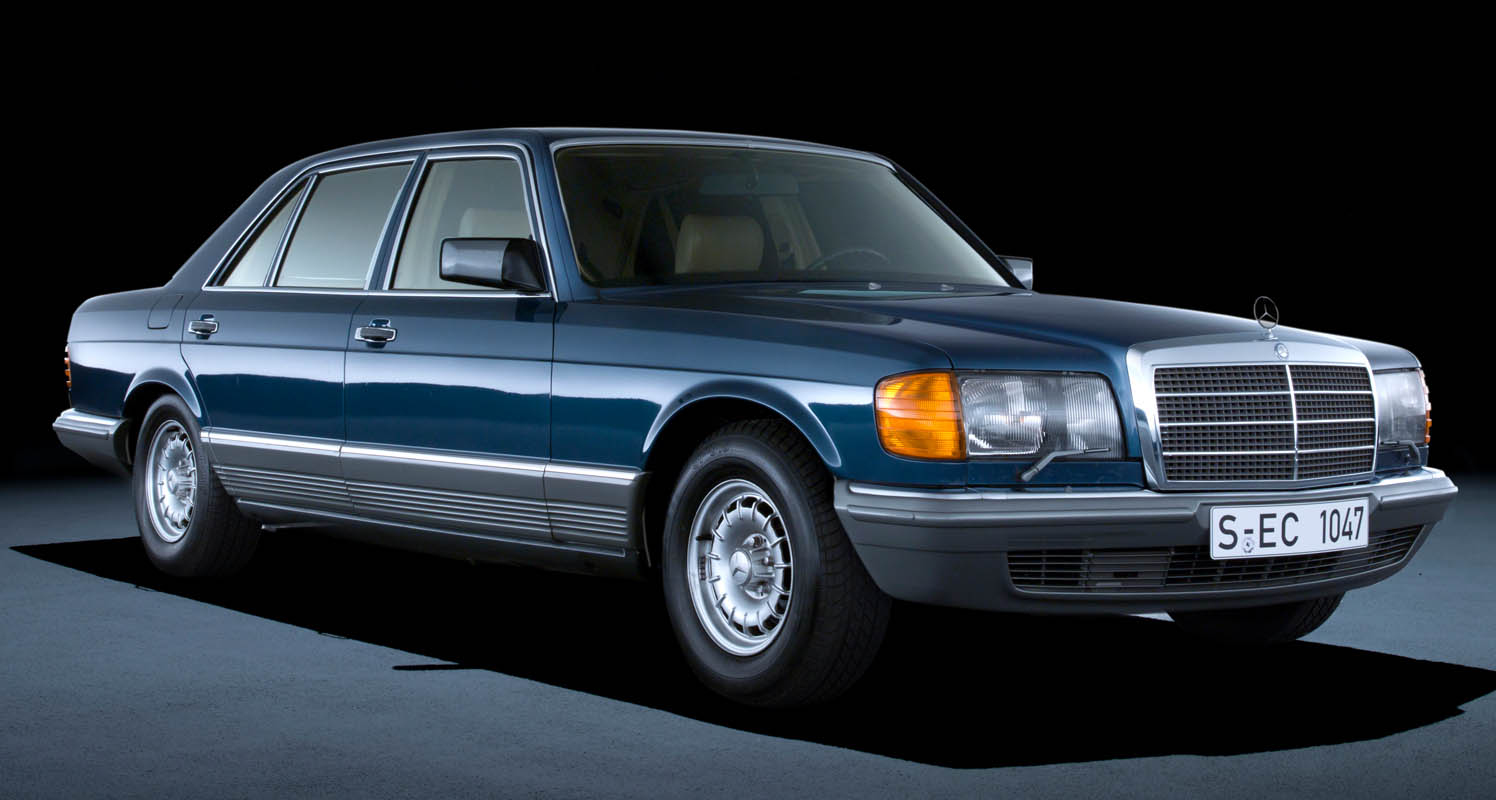 The airbag is one of Mercedes-Benz’s outstanding innovations in the field of passive safety. For this success story, 23 October 1971 was an important date: on that day, the then Daimler-Benz AG applied for a patent entitled “Impact protection device for the occupants of a motor vehicle” (patent specification DE 21 52 902 C2) fifty years ago.

The brand’s engineers had been working on the inflatable airbag since 1966. At the end of 1980, the first S-Class Saloons (model series 126) were delivered with the combined driver airbag and seat belt tensioner. The restraint system celebrated its public world premiere at the Amsterdam International Motor Show (IAMS) from 5 to 15 February 1981. This provides an indication of the importance of perseverance and staying power for the success of innovations in passenger car development.

In 1992, driver and front passenger airbags were introduced as standard equipment, initially in the S-Class, SL and the 400 E and 500 E models (model series 124). For all other models, the safety system was available as an option. This “impact protection device” has made its way into nearly all new cars built over the past four decades. In the USA, the installation of front airbags for the driver and front passenger was made a legal requirement in 1997. In the interests of safety, Mercedes-Benz has continuously driven airbag development forward. Important additional innovations were the side airbag (1995), the window airbag (1998), the head/thorax sidebag (2001), the kneebag (2009) and, in 2013, the thorax/pelvis sidebag, the cushionbag and the belt airbag, an inflatable seat belt strap. In the S-Class in the 221 model series, unveiled in 2005, the gas generator filled the driver and front passenger airbags in two stages, depending on accident severity. In the current S-Class (model series 223), frontal airbags are available for the first time for the two outer rear seats. Forty years after the introduction of airbags, this is the first time that a completely new concept has been applied, and one that is particularly suitable for conditions in the rear. The large number of active and passive safety systems and innovations, many from Mercedes-Benz, contribute to reducing the number of people injured or killed on the roads. For example, the number of traffic deaths in Germany dropped from 18,753 in 1971 to 2,719 in 2020.

Thirty years from the idea through to its implementation

Inventor Walter Lindner registered an invention with the German Patent Office as early as 6 October 1951, which referred to an “inflatable container in a folded state which inflates automatically in the event of danger”. Lindner, resident in Munich, called his idea a “device to protect people in vehicles against injuries in the event of collisions”. However, despite the similarity of the description to what was later to become the airbag, it was technically not possible, seven decades ago, to put it into practice. There were still difficulties, e.g. in the release sensor system, the generation of pressure for filling the airbag within milliseconds and the necessary tear resistance of the airbag fabric. Mercedes-Benz took up the airbag idea in 1966. Professor Guntram Huber, who has been responsible for safety engineering at Mercedes-Benz for some decades, looks back at the early stages: “We knew we could do it, we just didn’t know when we’d be finished.”

After around 250 crash tests, more than 2,500 sled tests and thousands of trials on individual components, the Mercedes-Benz safety engineers managed to bring the technology to series production maturity over the next fifteen years. The breakthrough in generating the gas came in the shape of a solid propellant, like that used in rocket engines. It was housed in tablet form in the impact-absorbing boss in the steering wheel beside the folded airbag. In the event of an accident, a pyrotechnical gas generator ignites the propellant and the airbag, made of lightweight, tear-resistant polyamide with an initial volume of 60 to 70 litres (driver’s airbag), is inflated within around ten milliseconds. “It deflates again almost as quickly,” explains mechanical engineer Professor Huber, “that’s important, otherwise the occupants would bounce back and forth.” After the airbag has deployed, harmless nitrogen gas remains. Since the system requires the use of an explosive, Huber’s team of development engineers also had to participate in explosives training by order of the authorities.

Seat belt and airbag as a team

From 21 January 1974, it was compulsory to install seat belts in new cars in the Federal Republic of Germany and the retractable three-point belt with one-hand operation quickly became established and increased safety considerably. The safety engineers at Mercedes-Benz recognised at an early stage that the safety effect could be improved even more. The result of this was the system introduced at the end of 1980: on the driver’s side, it was the airbag that supplemented the seat belt, while on the passenger’s seat it was the seat belt tensioner. These two components worked effectively together in severe frontal collisions: in addition to supporting the torso, the airbag also supported the head and neck and mitigated contact with the steering wheel, for instance, while the seat belt and seat belt tensioners restrained the torso. As early as 1984, the seat belt tensioner became standard equipment for both front seats of Mercedes-Benz passenger cars. The seat belt tensioner was triggered simultaneously with the airbag and also used pyrotechnics. The propellant charge ensured that the automatic three-point seat belt was tightened within a few milliseconds. Both the driver and front passenger were restrained firmly in their seats. Development continued: Mercedes-Benz presented the front passenger airbag in September 1987.

The energy-absorbing airbag was a prerequisite for yet another innovation: in 1995, the seat belt tensioner was combined with a belt force limiter, which further reduced the force exerted on the chest. The next major development step came in 2002 with the introduction of the PRESAFE® preventive occupant protection system, which included a seat belt with an additional electric motor in the inertia reel, in addition to other core features. In contrast to the pyrotechnically triggered seat belt tensioner, the electronic variant was reversible and could therefore be activated before an accident, e.g. when a dangerous situation is detected – the seat belt is loosened again if no collision occurs.

End of August 2021, Mercedes-Benz unveils a concept collection, created in collaboration with US-American designer and creative director Heron Preston that pushes the boundaries of innovation and sustainability in fashion design. Paying homage to the patent of the airbag, which celebrates its 50th anniversary and the 40th anniversary of the life-saving feature’s use in Mercedes-Benz passenger cars, the concept looks are made of recycled airbag materials. 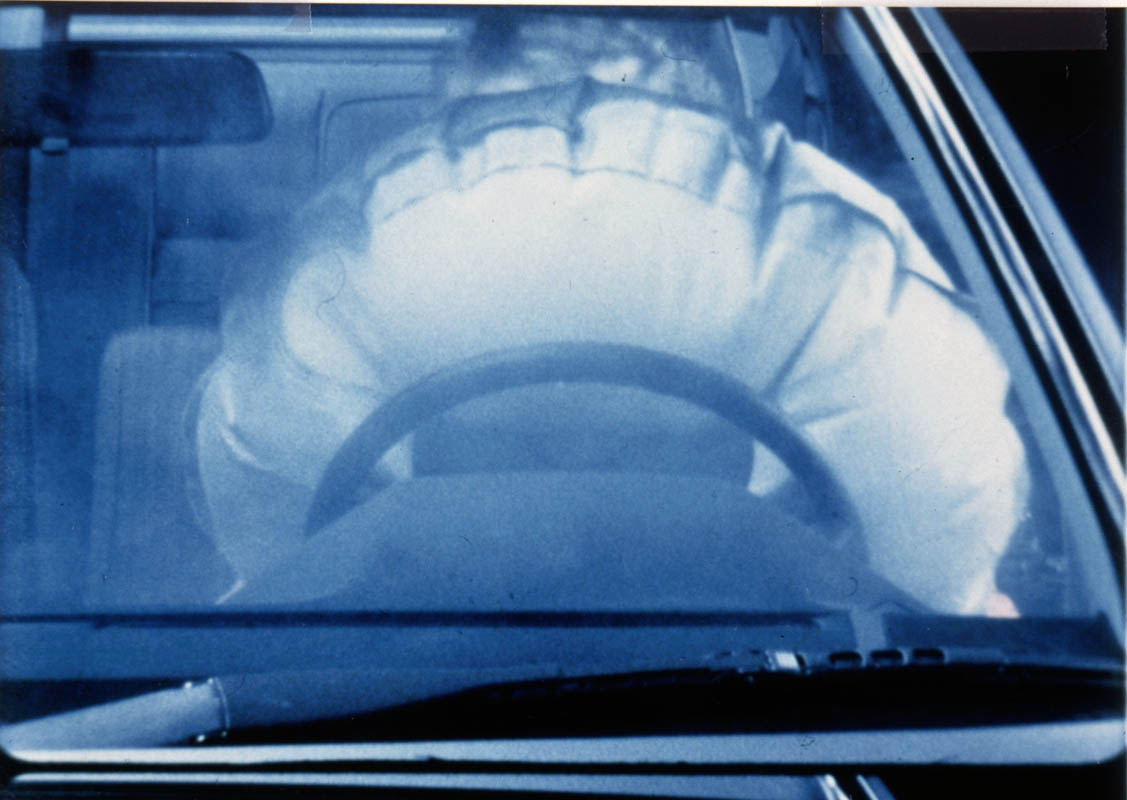 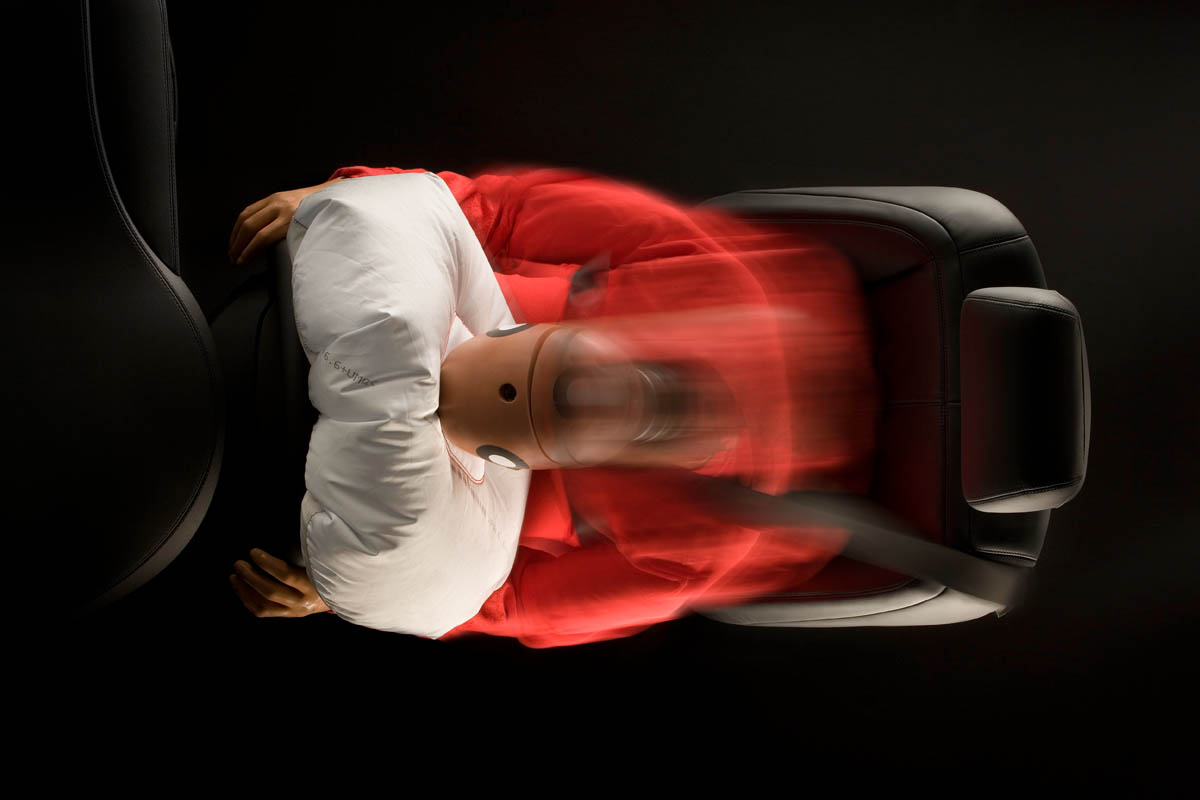 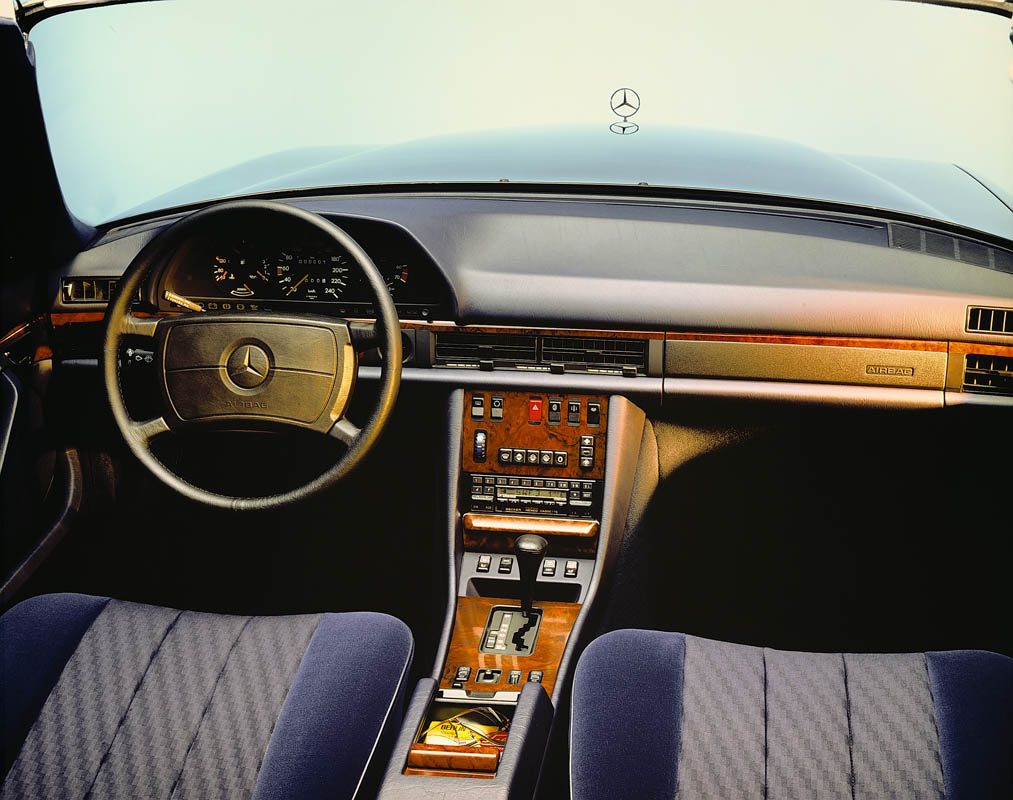 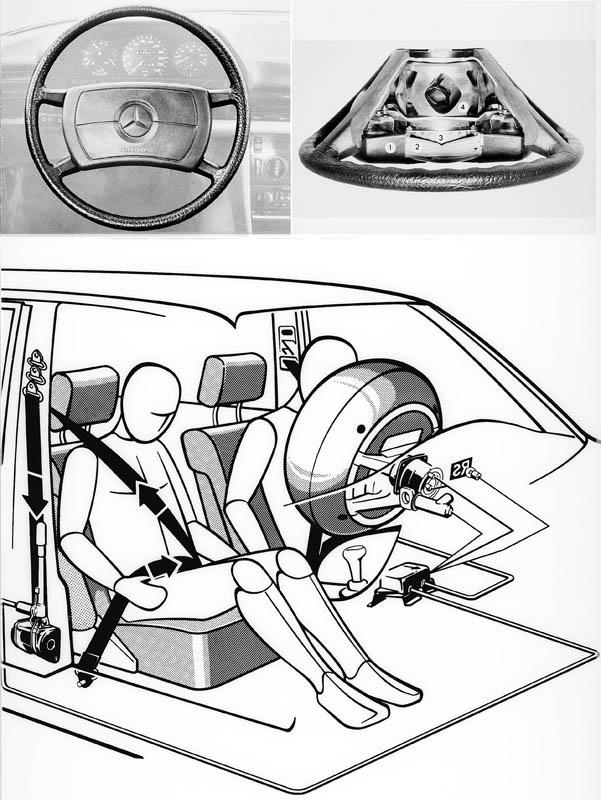 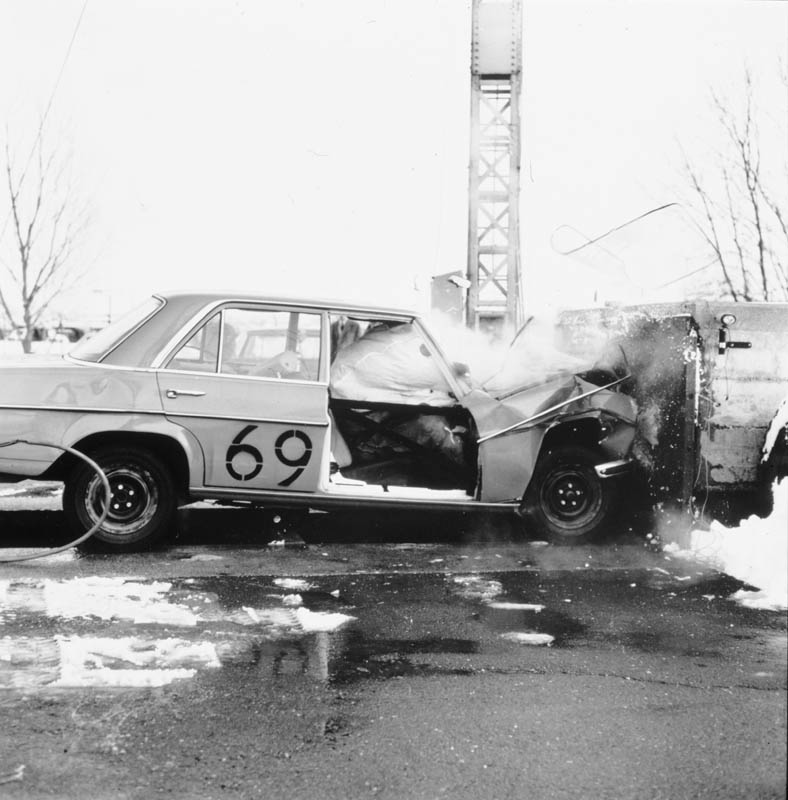 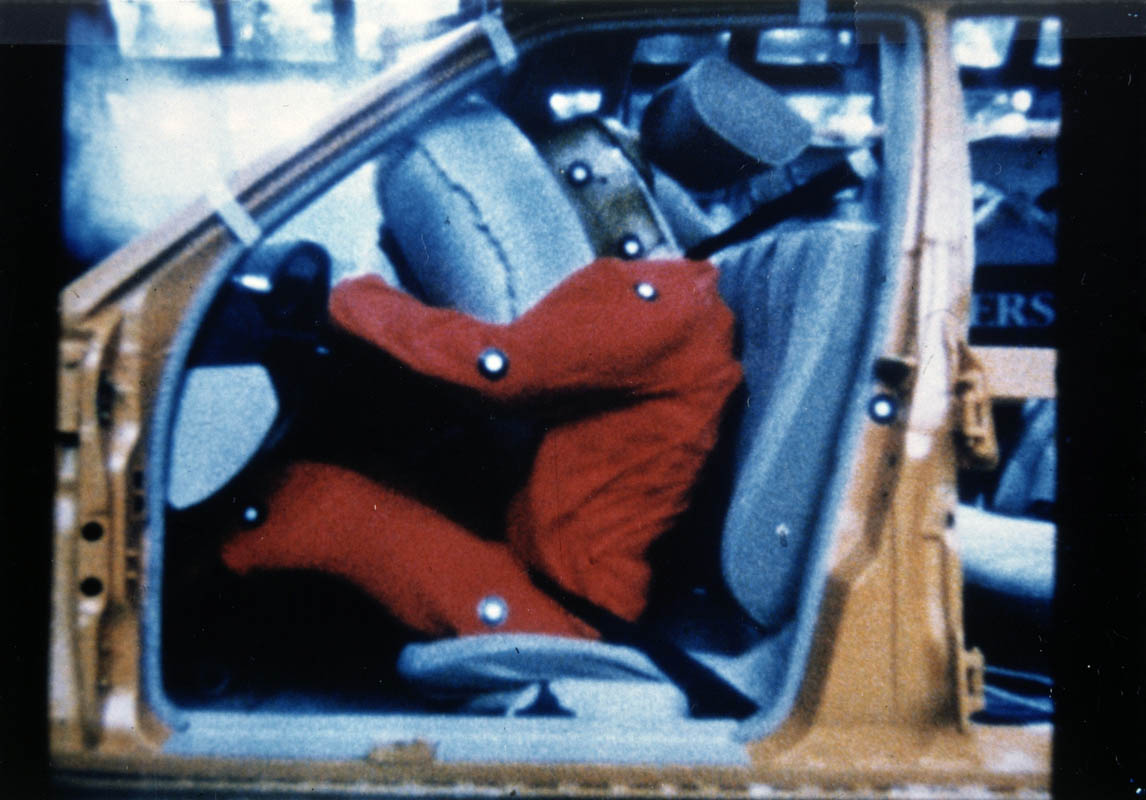 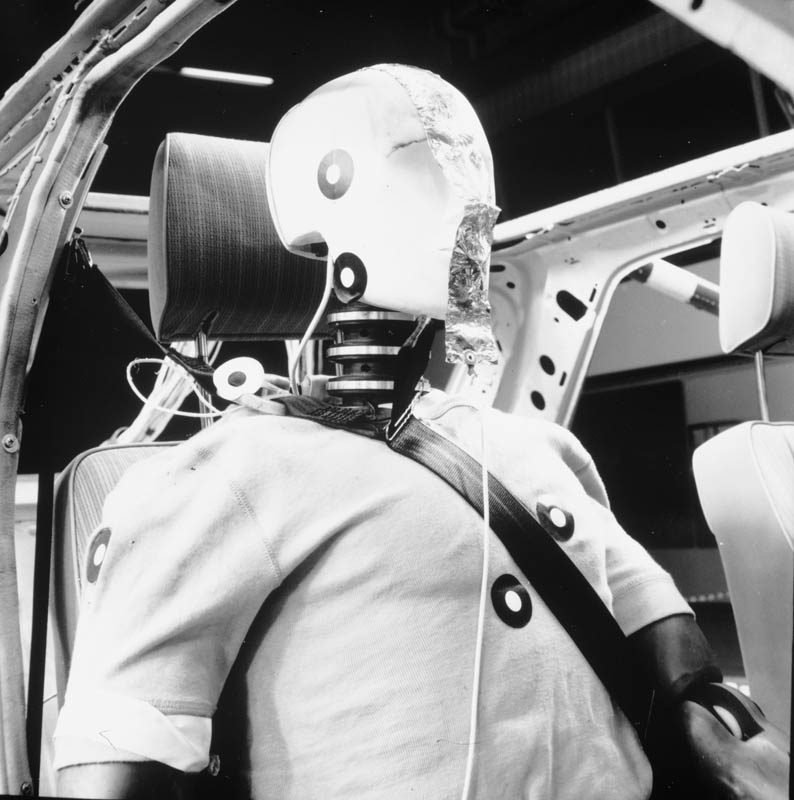 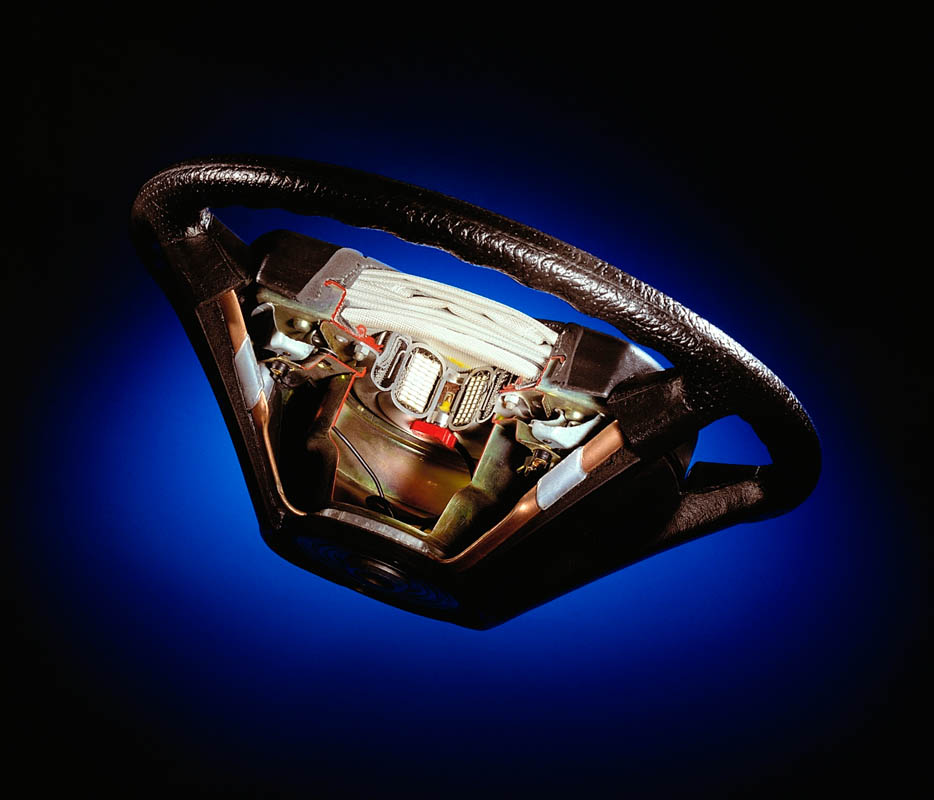 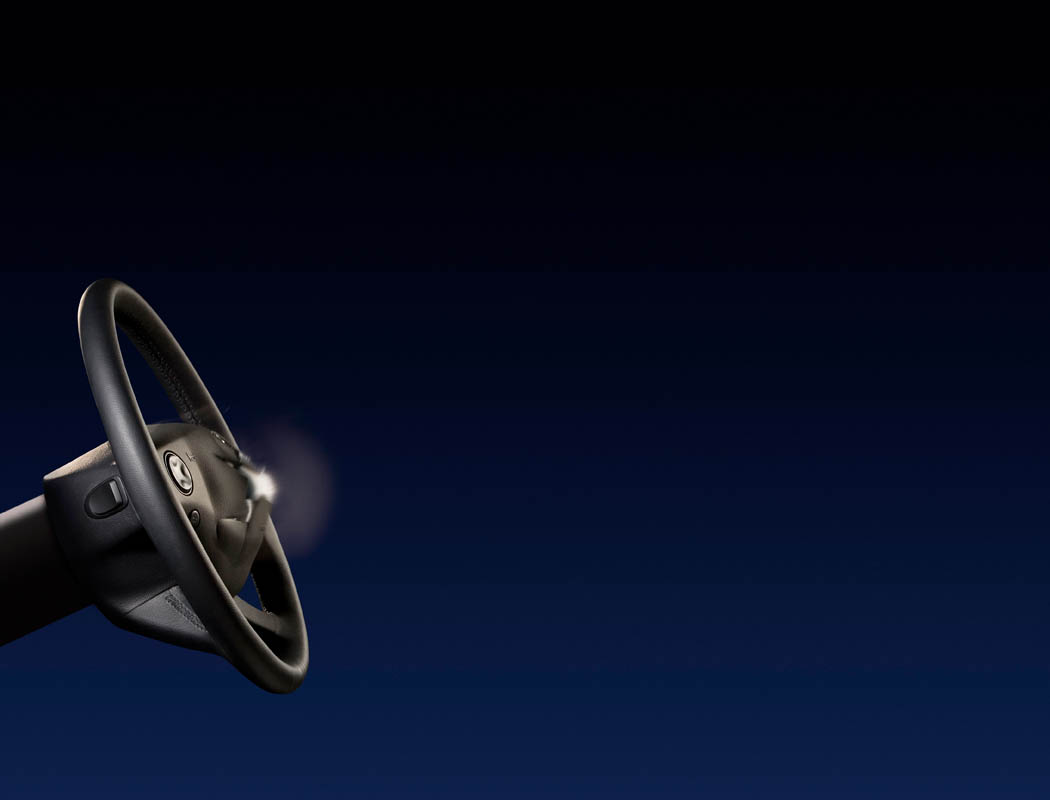 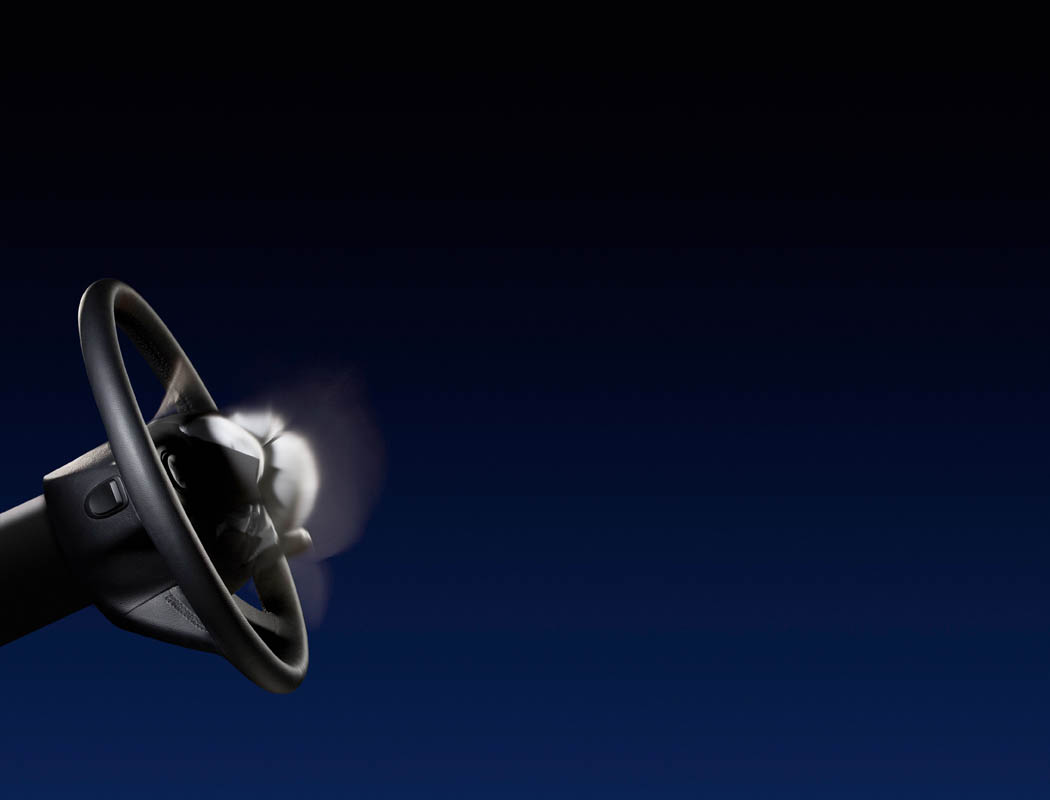 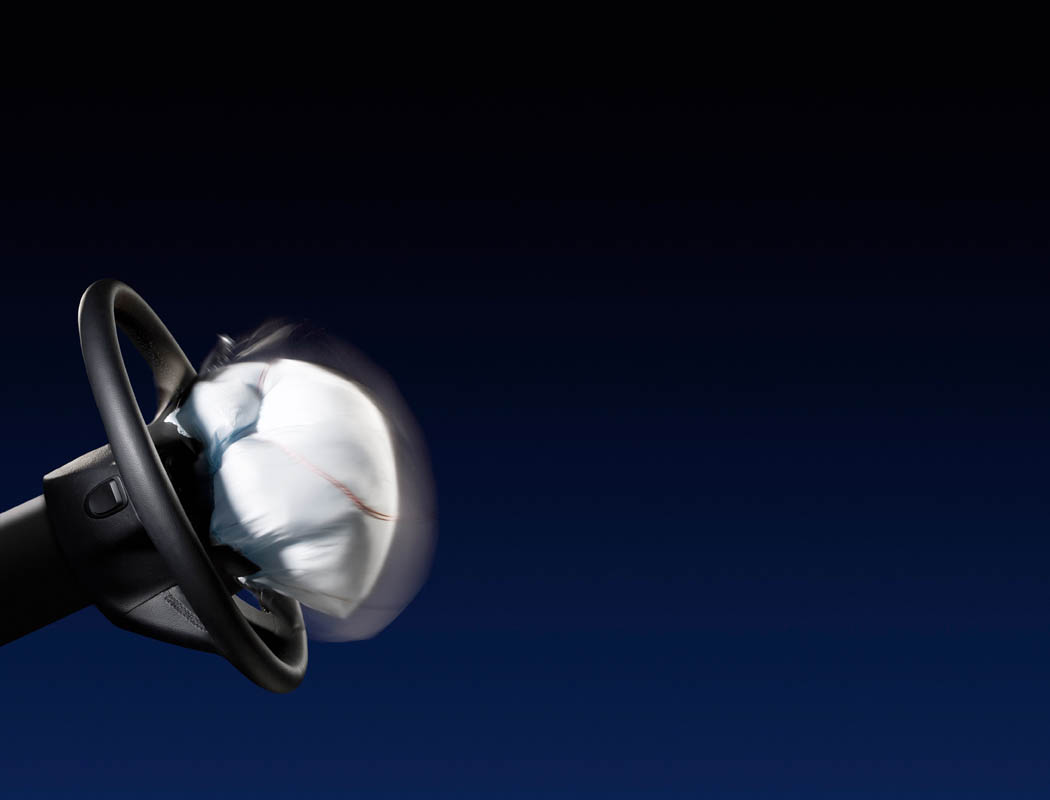 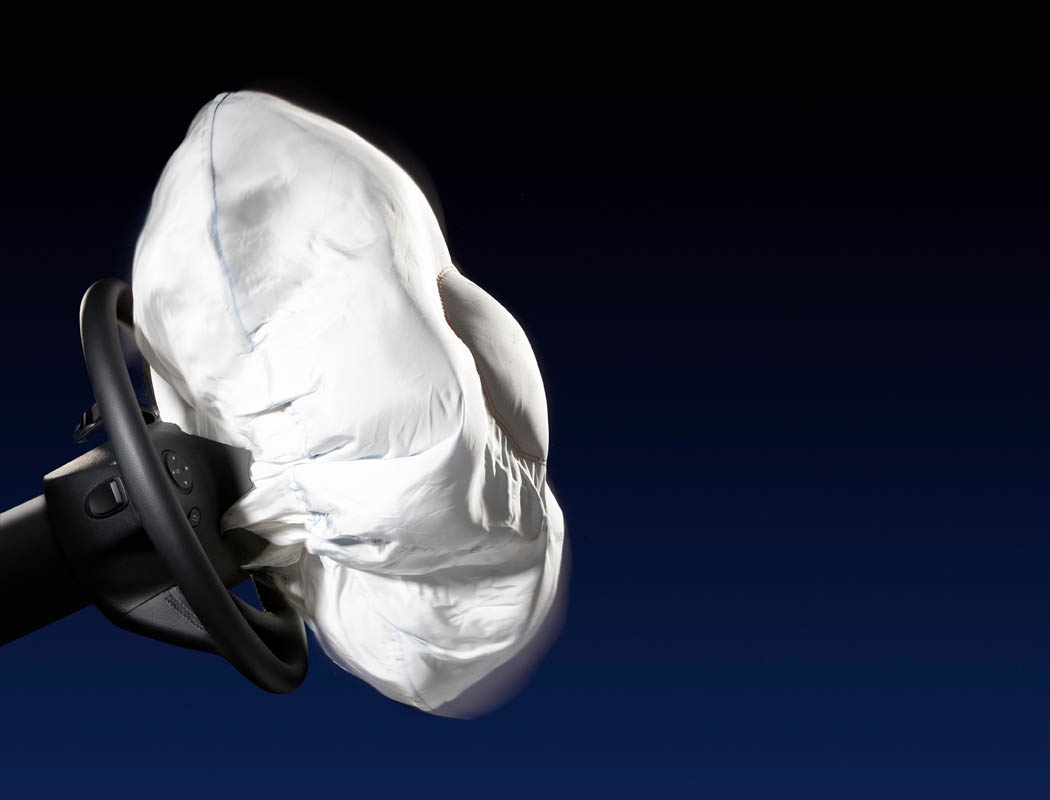 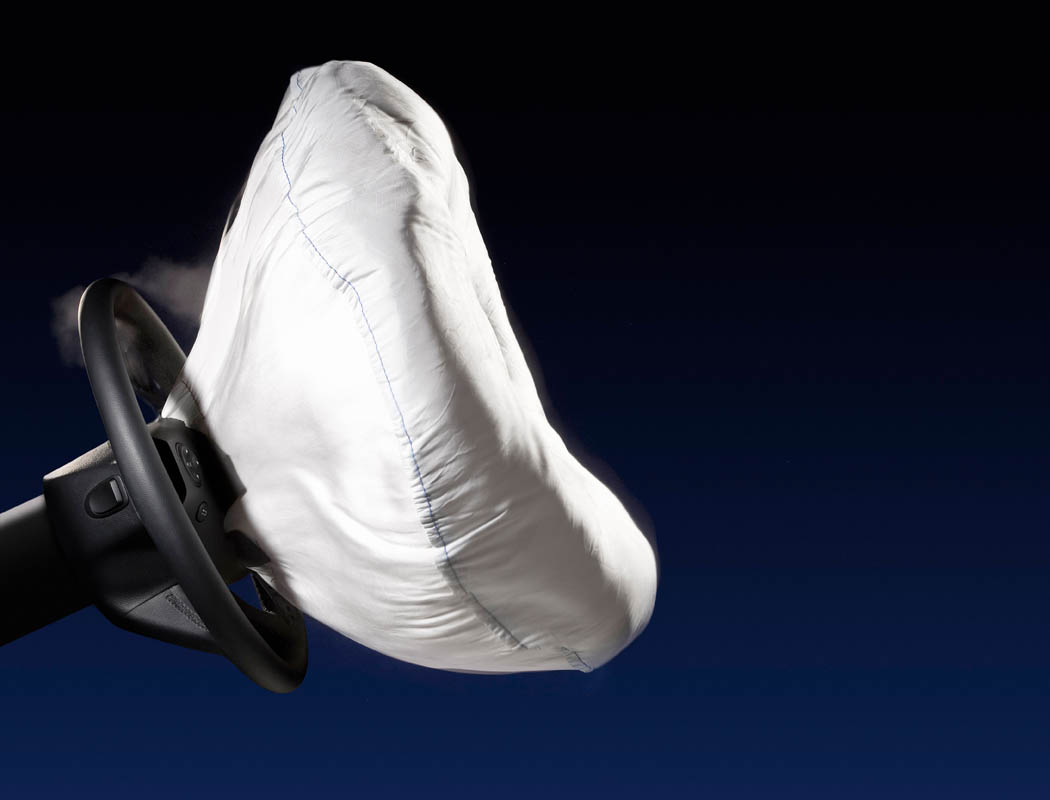 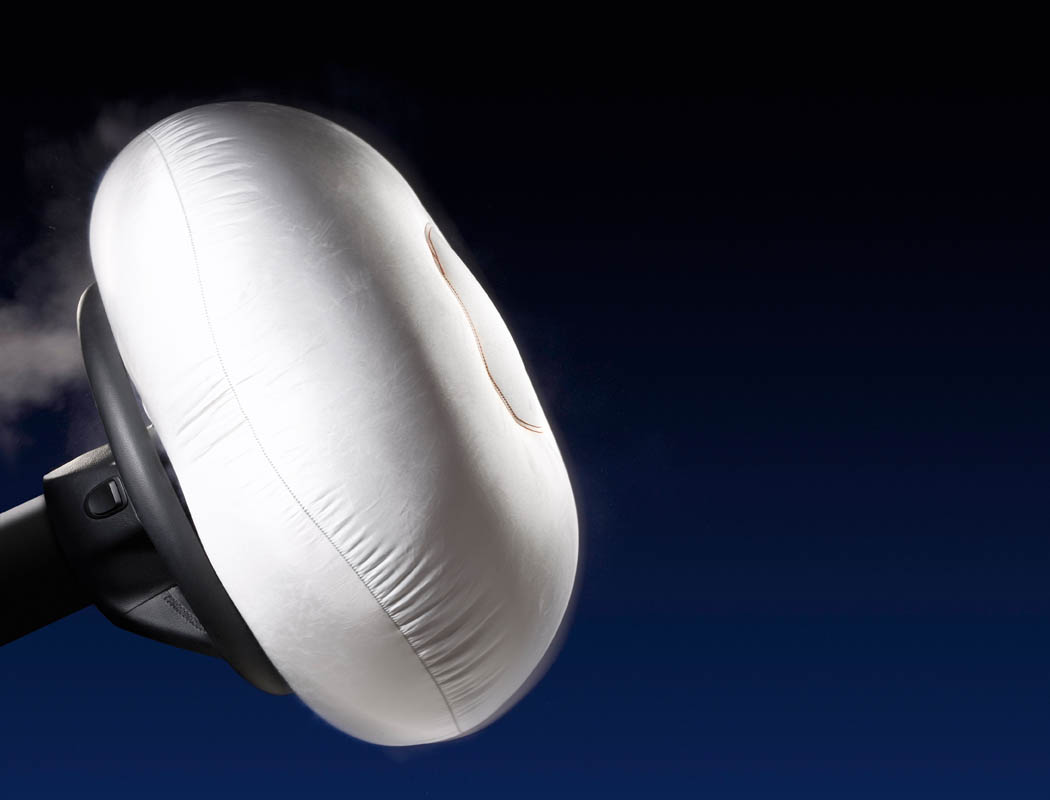 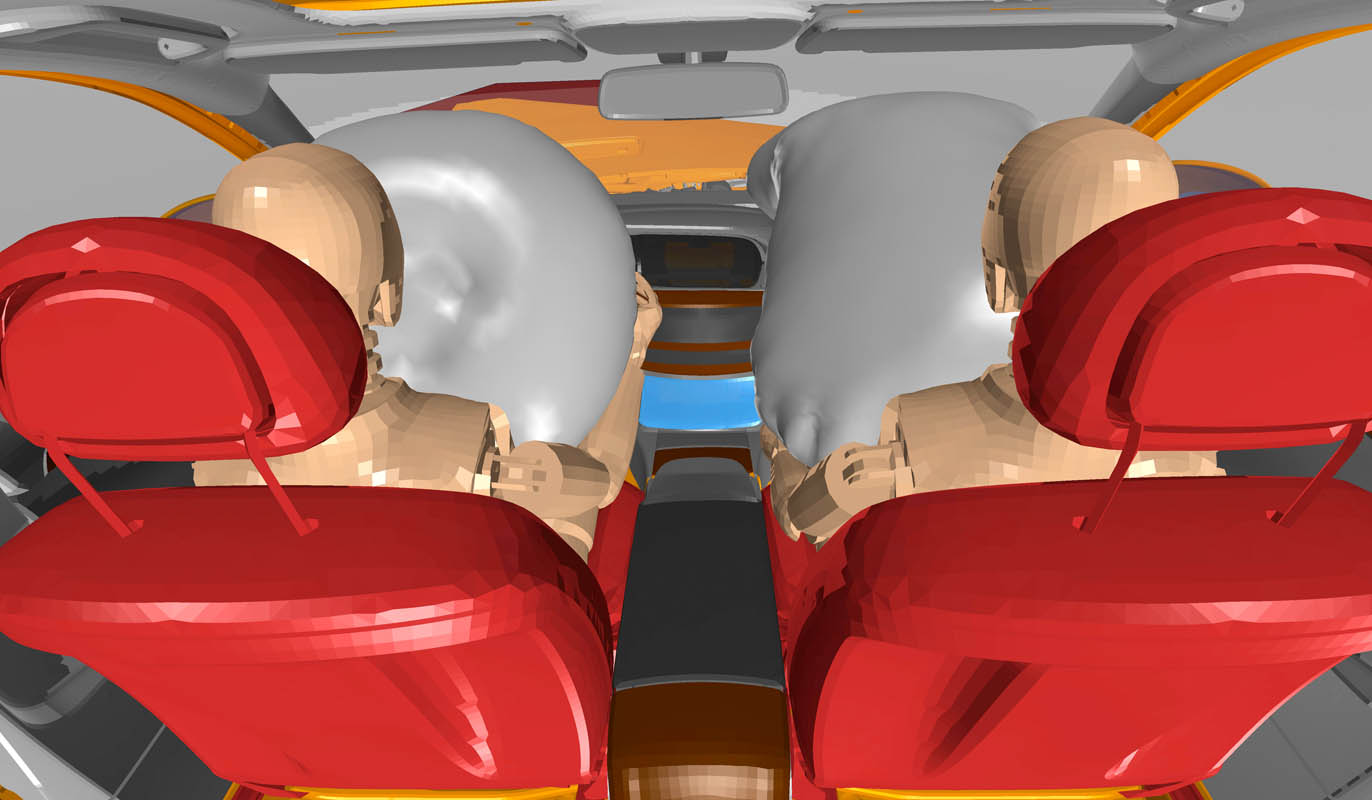 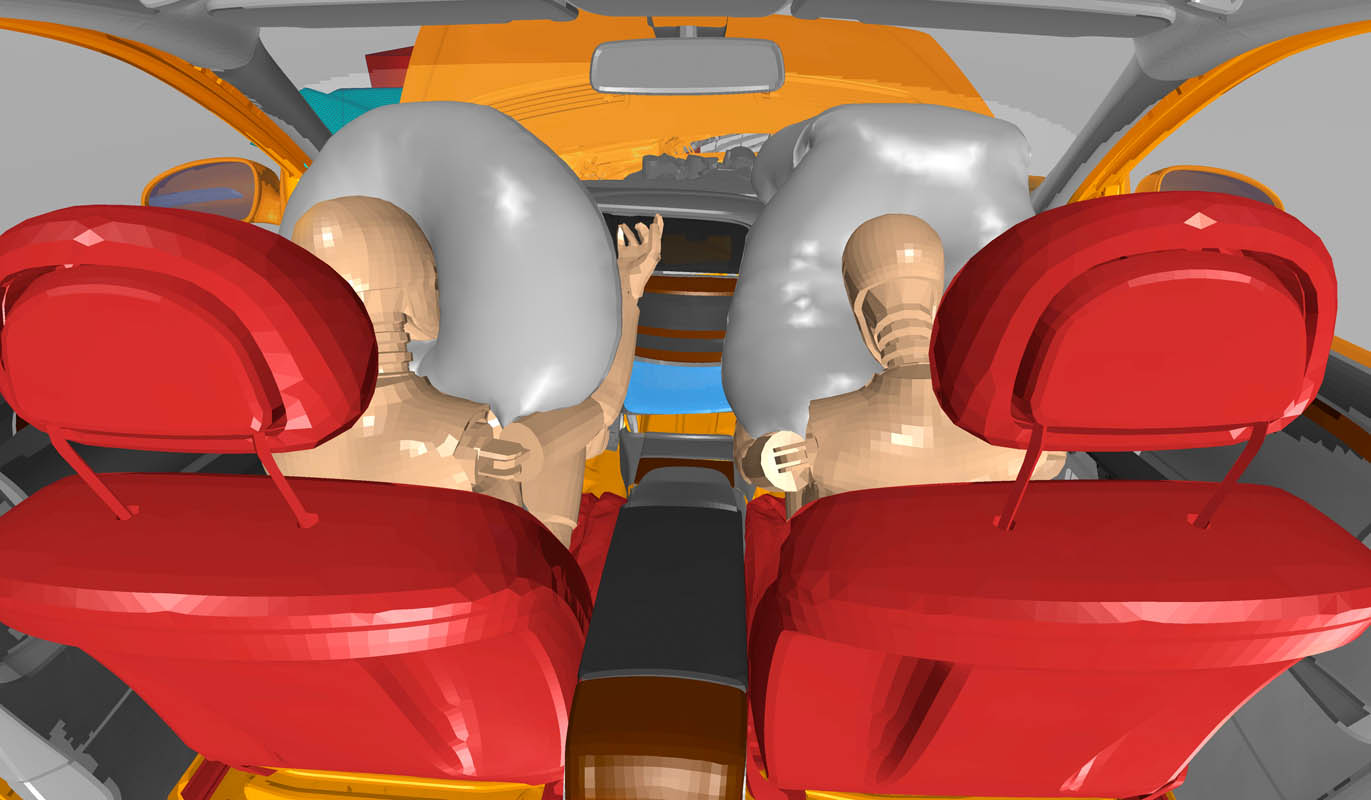 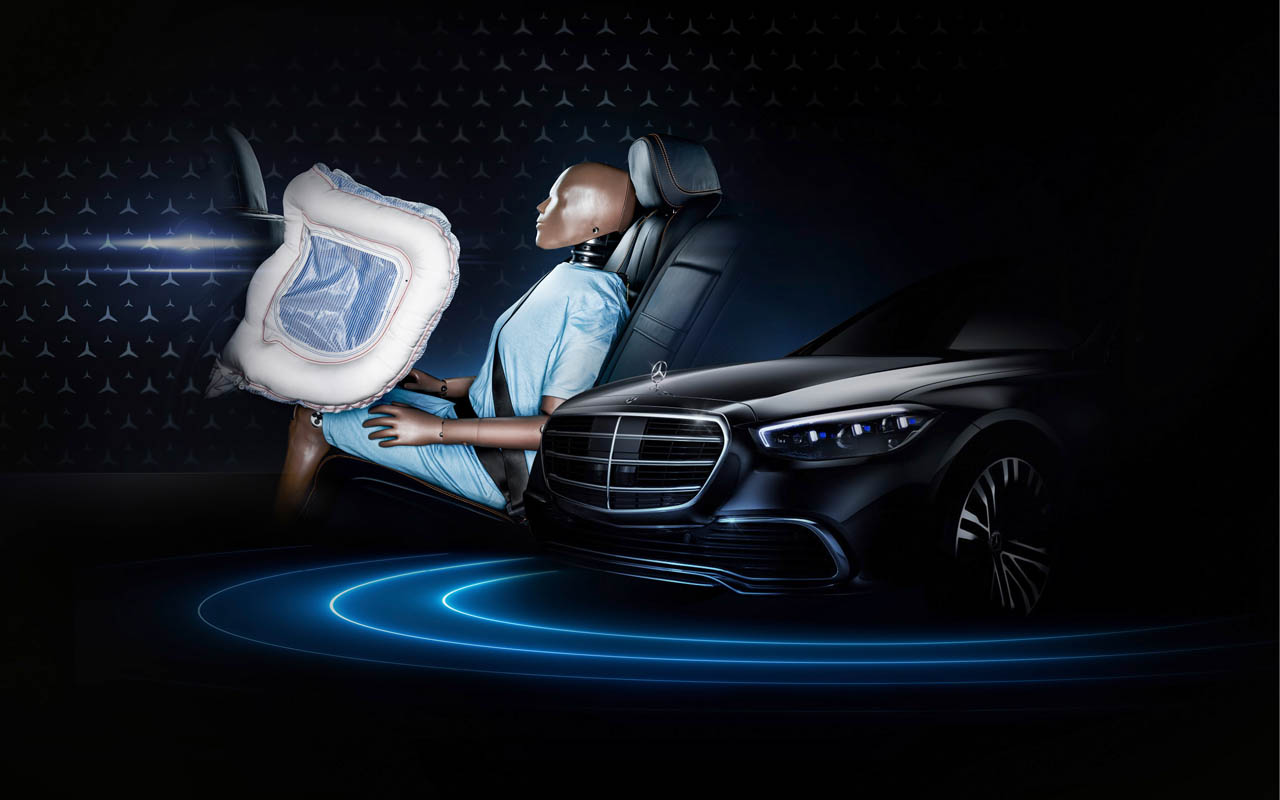 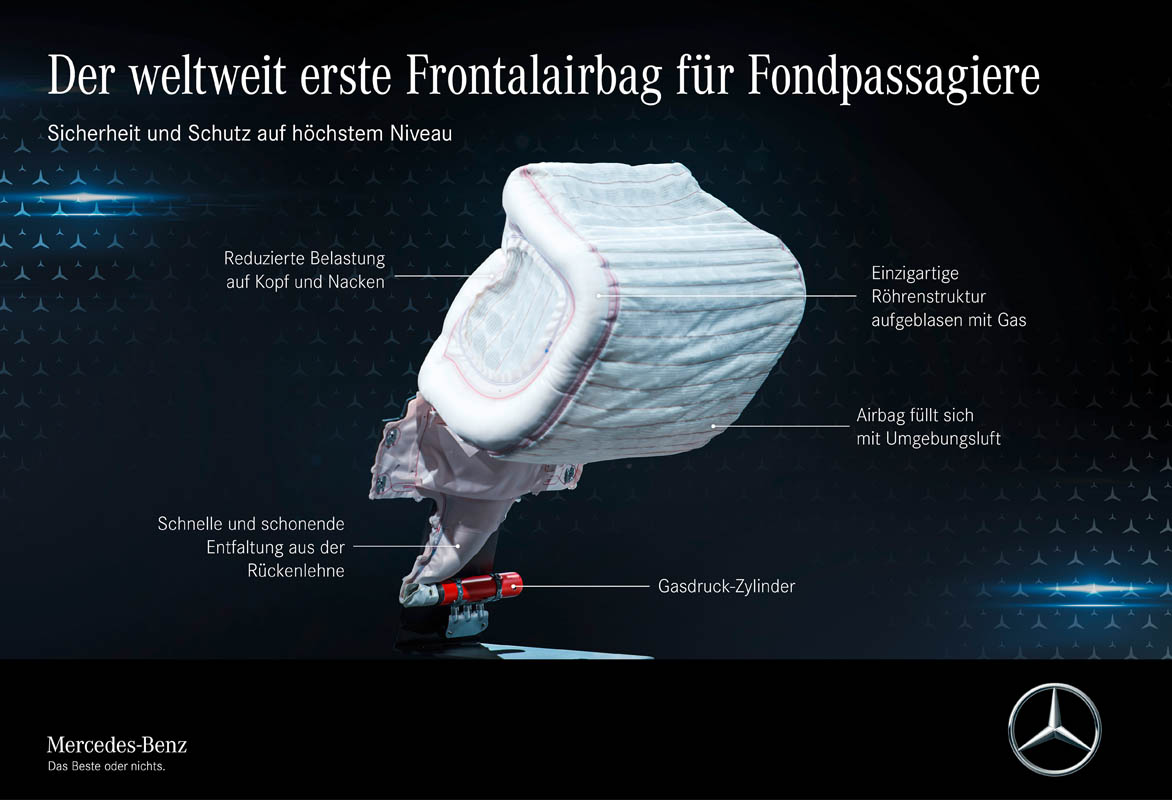 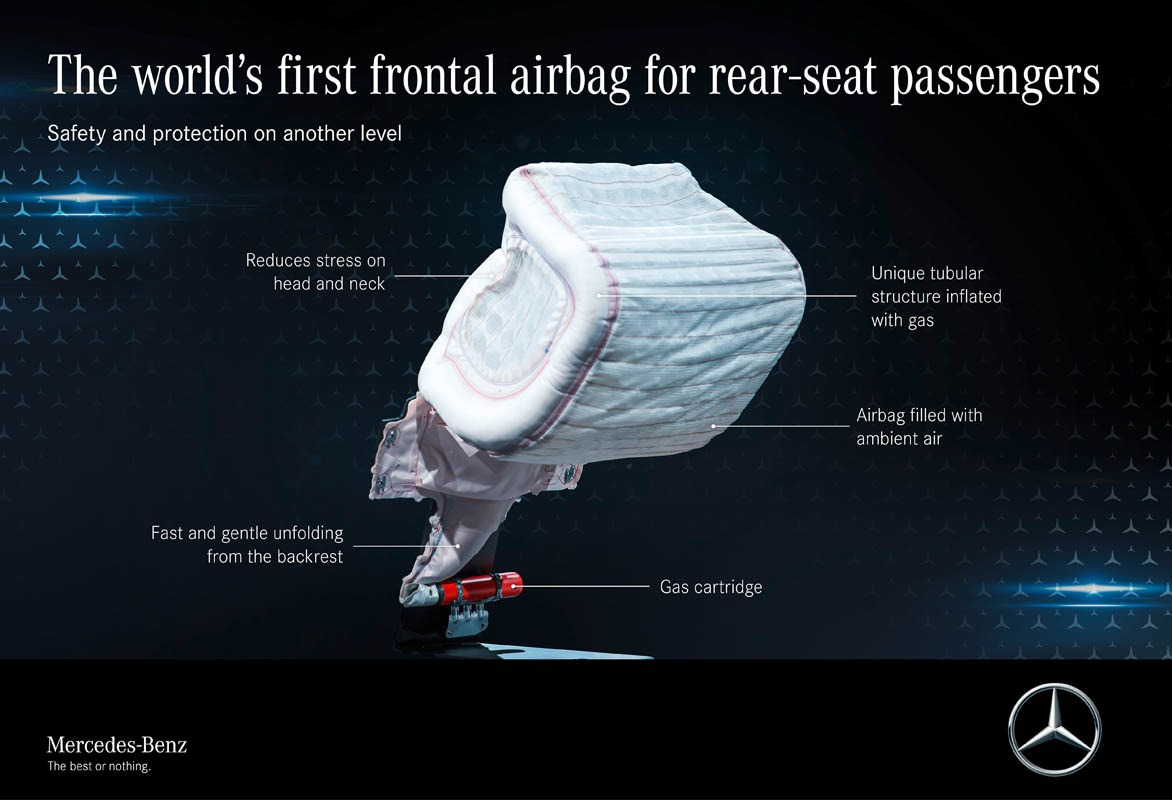 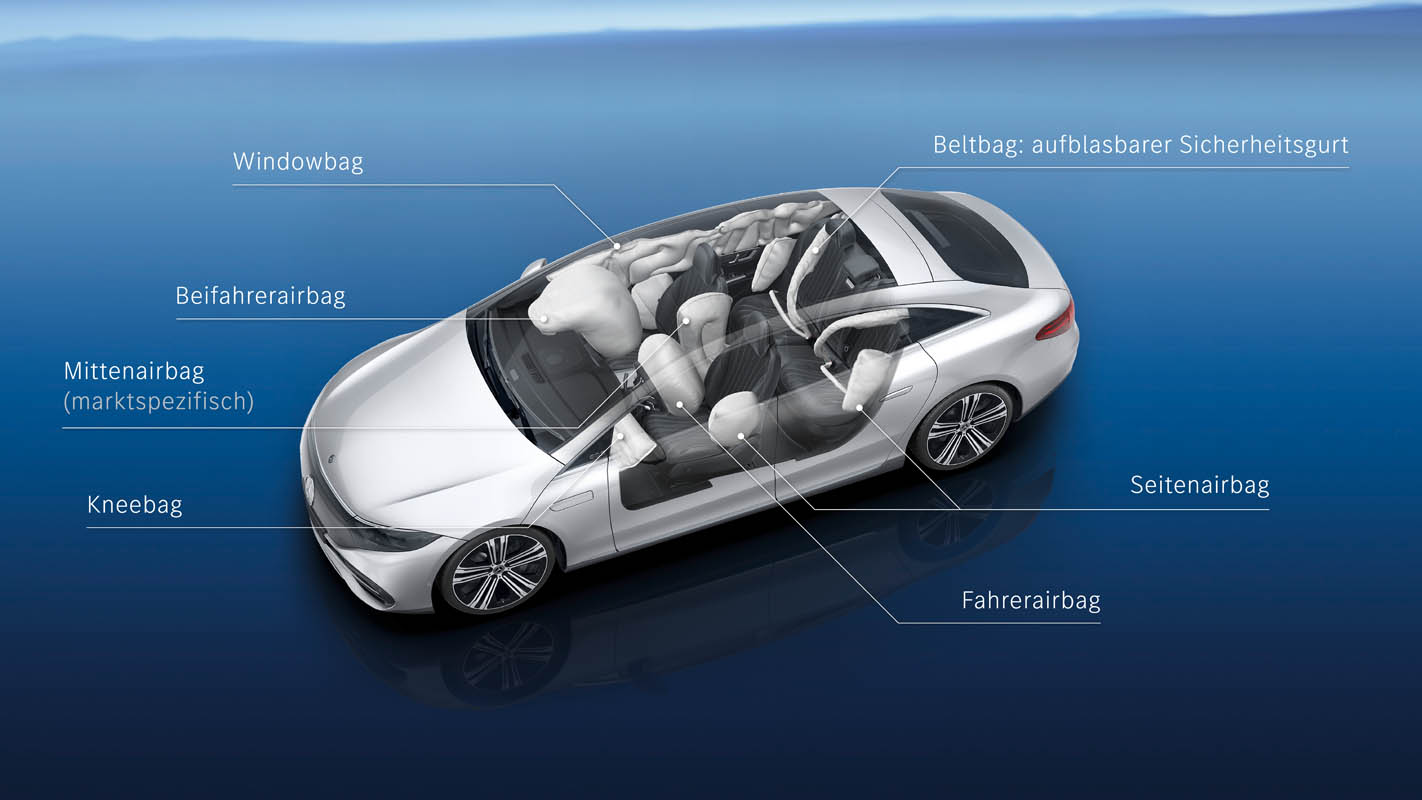 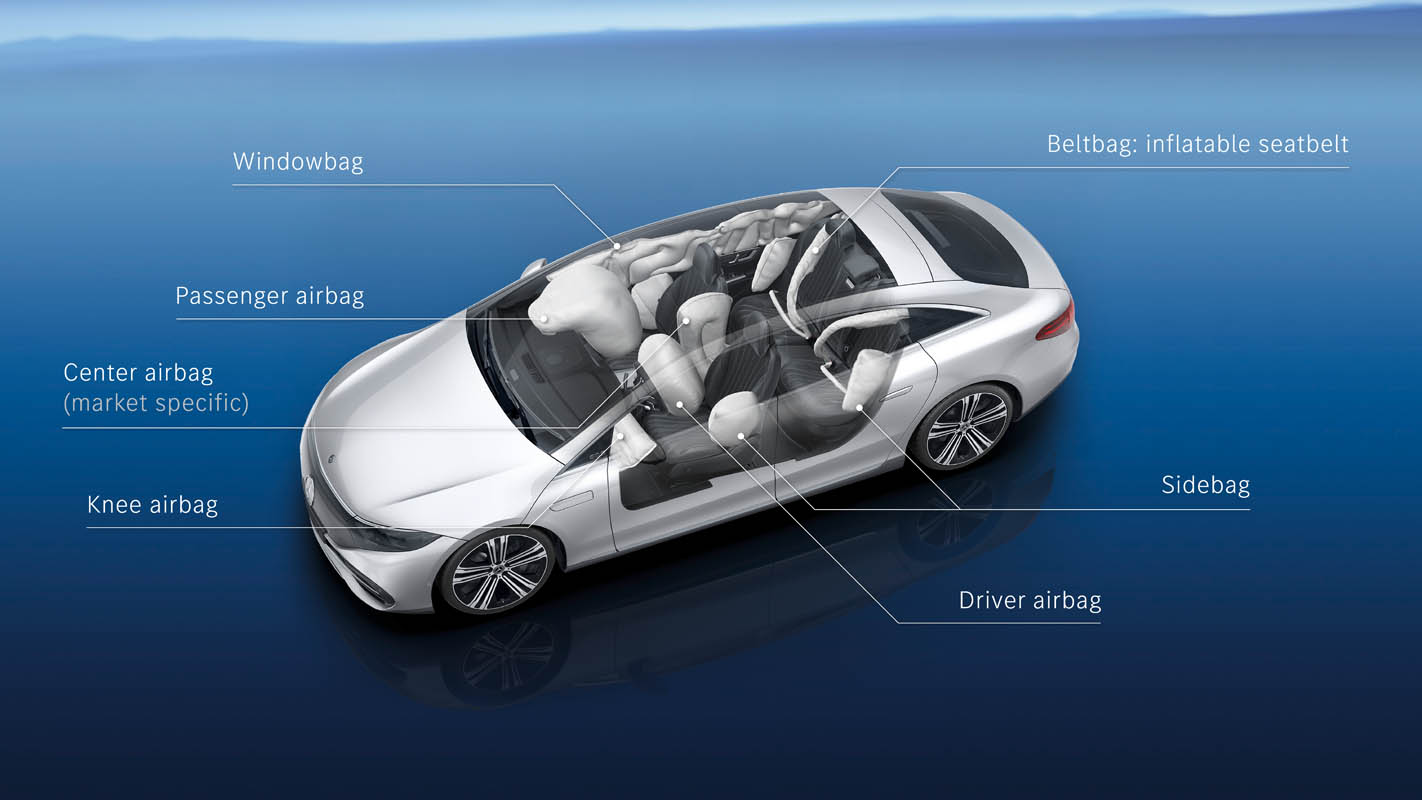 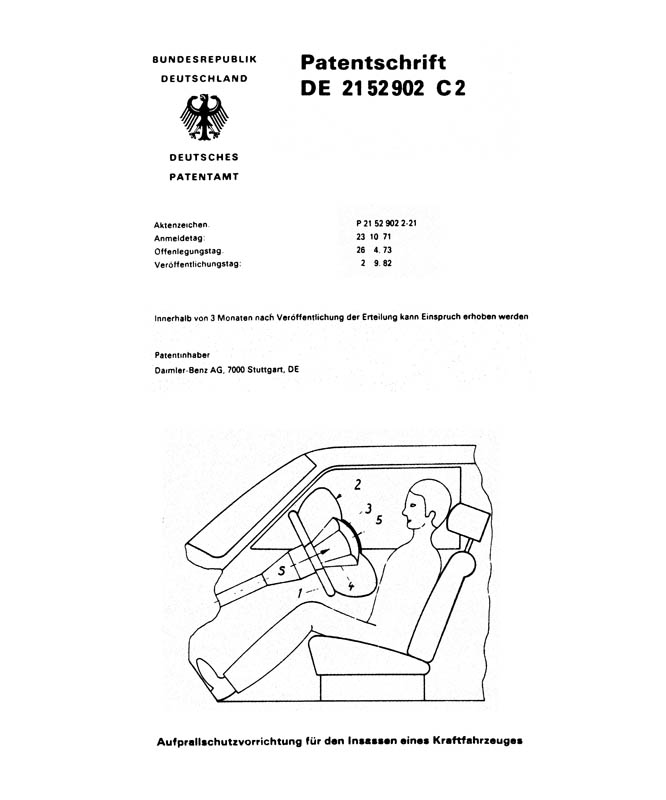 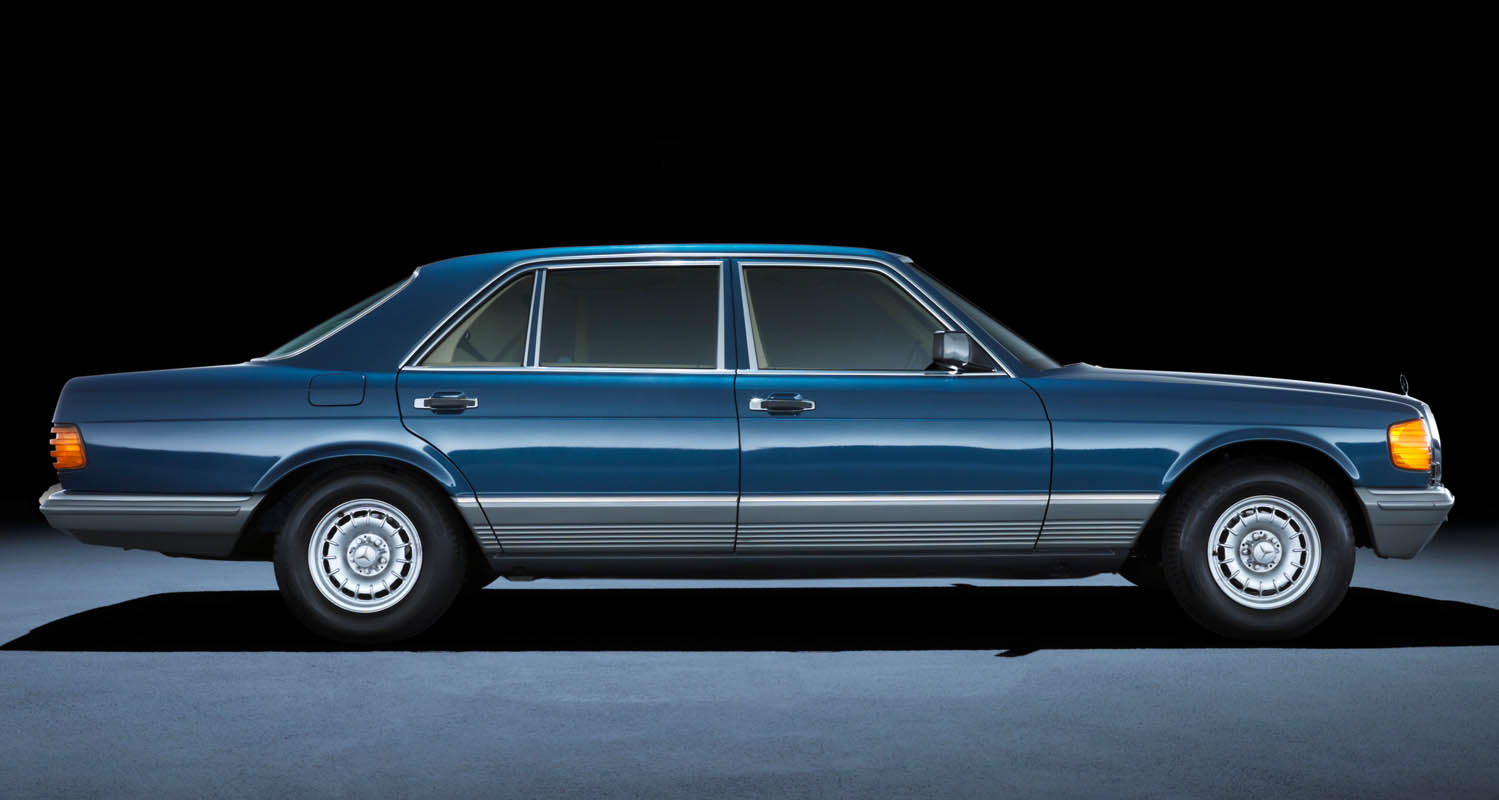 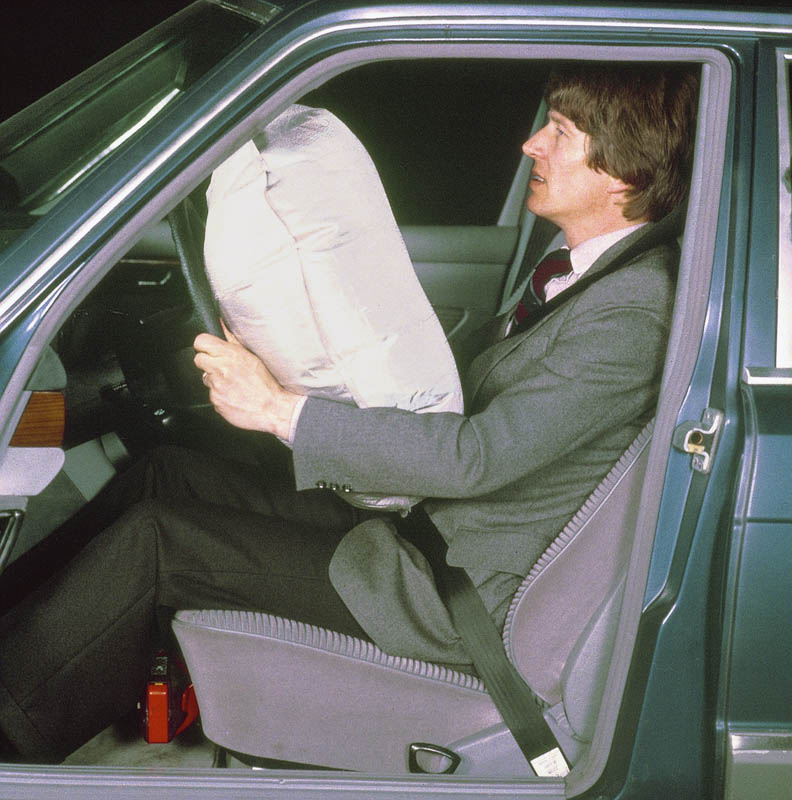