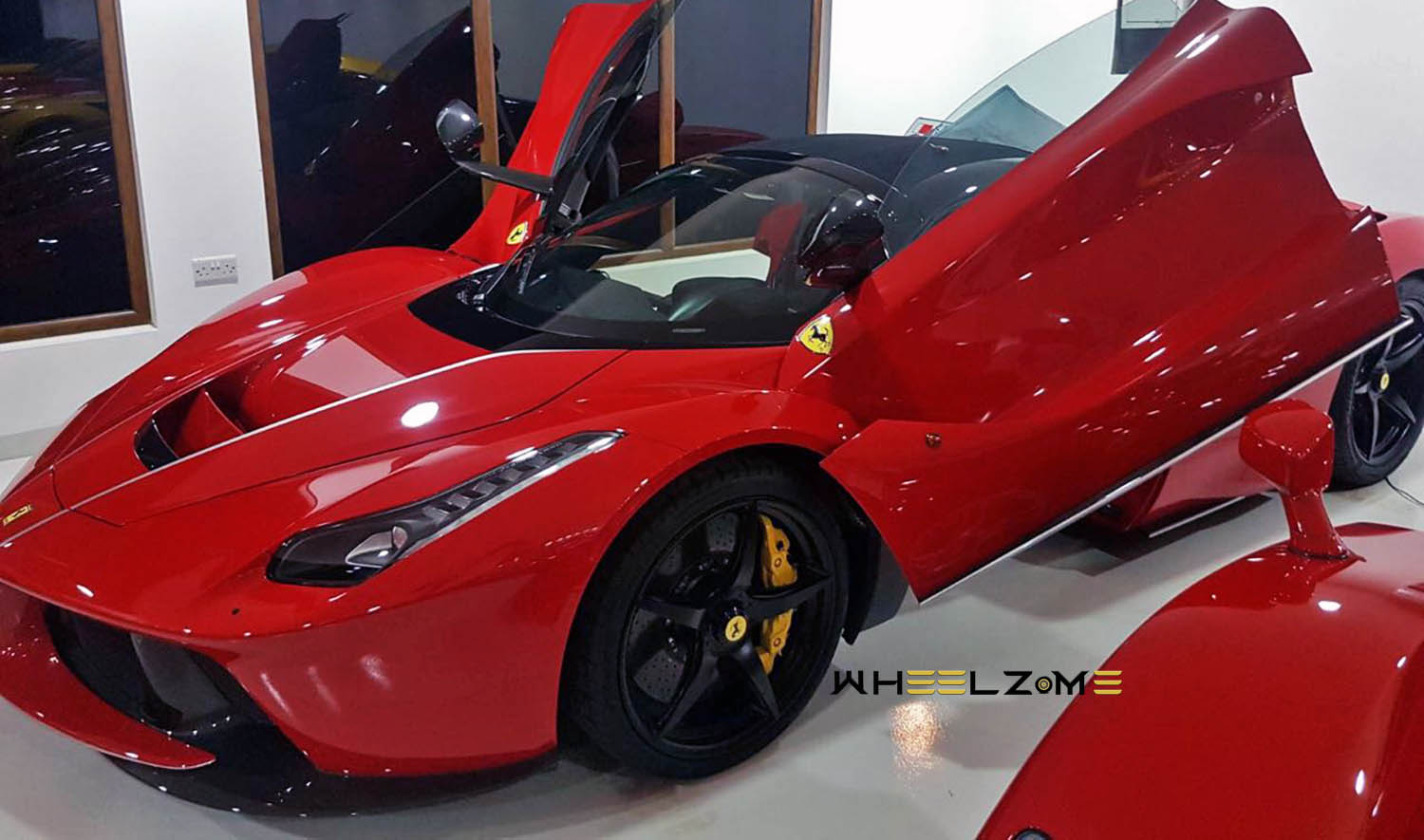 Technological excellence, performance, style, exclusivity. These are Ferrari’s unique core values which are perfectly represented by the car launched to mark the 70th anniversary of the foundation of the company. Designed for Ferrari’s most passionate clients, the LaFerrari Aperta is the new limited-edition special series, an open-top version of the acclaimed LaFerrari supercar.

Available with both a carbon-fibre hard top (optional) and soft top, the LaFerrari Aperta boasts the same specification and characteristics as the LaFerrari, combining extraordinary performance with the unique exhilaration of open-top driving. It is equipped with the same hybrid power unit as the coupé: an 800 cv 6,262cc V12 engine (specific power output of 128 cv/l, compression ratio 13.5:1) coupled with a 120 kW electric motor for a total power output of a 963 cv. The powertrain control software has been optimised to increase its overall efficiency thanks to the experience Maranello’s engineers gained with LaFerrari. The dynamic control systems integrated with the active aerodynamics remain unchanged.

The biggest challenge involved in designing the LaFerrari Aperta was to produce a convertible that could be pushed to the same extreme limits as the coupé. The Styling Centre’s input was concentrated on retaining as much of the original LaFerrari aesthetic as possible. The flowing line that neatly divides the cockpit from the car body is unchanged with only those elements above the waistline modified. The resulting impact is of a carbon-fibre ‘flying bridge’ hunkered into the main volume.

Engineering development focused on the chassis and aerodynamics and produced absolutely astounding results. The LaFerrari Aperta delivers the same top speed of over 350 km/h, accelerating from 0 to 100 km/h in in under 3 seconds and 0 to 200 km/h in 7.1 seconds. It also delivers the same torsional rigidity and beam stiffness characteristics, as well as dynamic performance levels. Modifications to the aerodynamic set-up ensure that, with the roof open and the side windows up, the drag figure is unaffected compared to that of the coupé.

Special attention was focused on the unique experience of open-top driving. The coupé’s blistering performance feels heightened to superb effect in the LaFerrari Aperta. The absence of the roof delivers a genuinely exhilarating experience with the hybrid power unit providing a heady soundtrack. A sophisticated wind-stop system, designed to improve aerodynamic and acoustic comfort, means occupants can easily carry on a conversation even at high speeds.

The LaFerrari Aperta’s powertrain, which is the same as the LaFerrari’s, uses hybrid technology. It couples an 800 cv 6262cc V12 with a 120 kW (163 cv) electric motor for a total output of 963 cv. Thanks to the HY-KERS system, it is the most high-performance and efficient Ferrari ever built.

Making full use of Ferrari’s F1 expertise with KERS systems further evolved for use on road cars, the V12 is perfectly integrated with the electric motor, seamlessly blending the advantages of both. The high levels of torque available at low revs from the electric motor allowed the engineers to optimise the internal combustion engine’s performance at higher revs, thus providing exceptional, continuous power throughout the rev range and a maximum torque peak of 900 Nm.

Coupled with the F1 DCT, the electric motor was designed employing High Specific Power Density technology which enabled the engineers to drastically reduce weight and volume in relation to available torque. The result is performance figures comparable to those of the F1 car, with the same torque density and the same efficiency (94%) or, in other words, very limited power dissipation.

The batteries consist of 120 cells assembled into eight modules, with a power output that’s the equivalent of 40 traditional batteries but weighing just 60 kg. The batteries are charged in two different ways: under braking – even hard braking when the ABS intervenes, such as when driving on a track – and every time the V12 produces more torque than required, such as in cornering. The Hybrid Power Unit is essentially the HY-KERS system brain and controls power delivery from both the V12 and the electric motor via two inverters and two DC-DC converters. Variable-frequency control makes torque delivery rapid and precise. 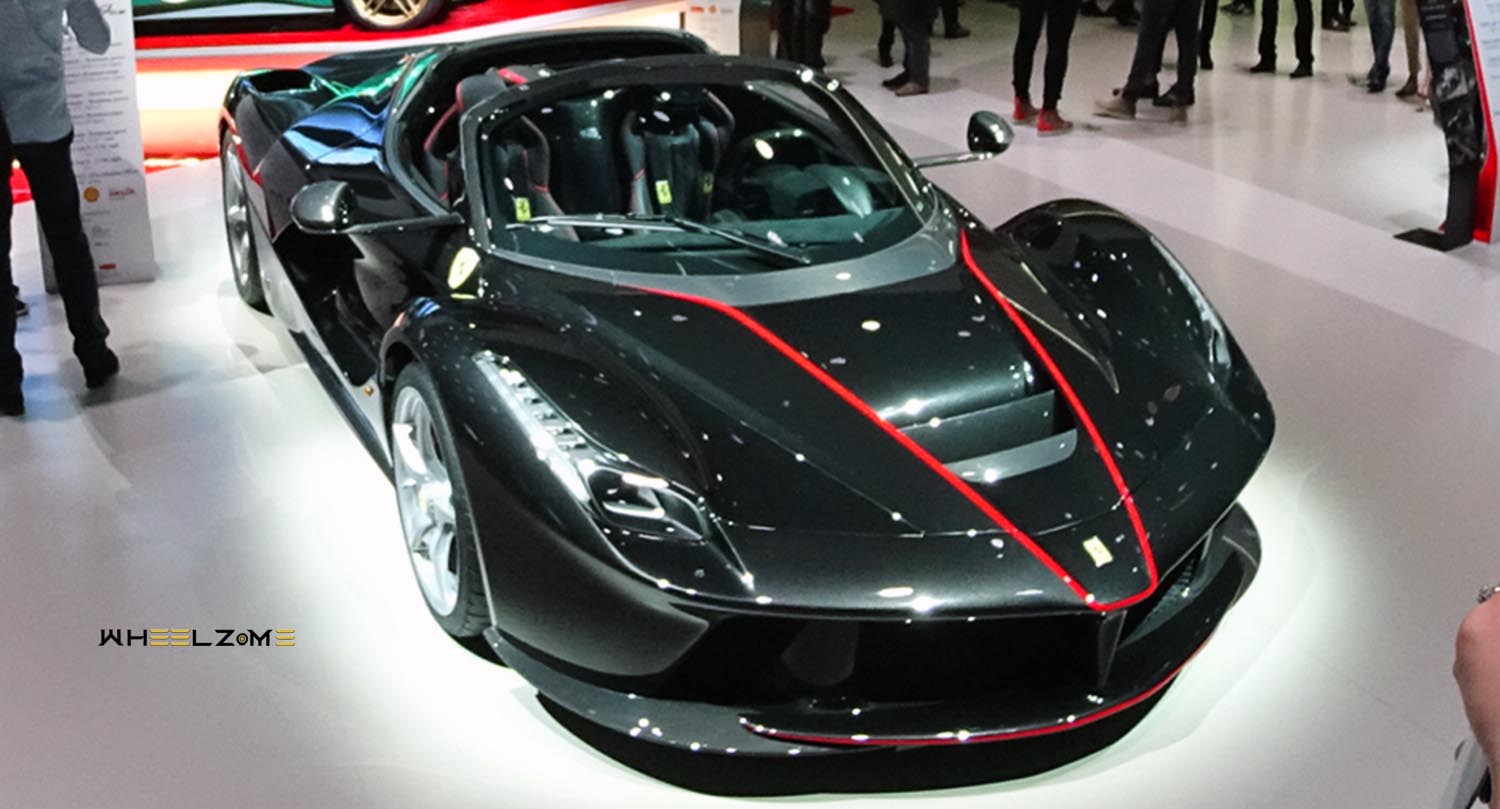 The 6,262 cc V12 is the most powerful naturally-aspirated engine ever sported by a road-going Ferrari. It punches out 800 cv and spins to 9,250 rpm, to deliver absolutely extraordinary performance, driving thrills and an unmistakable Ferrari sound. These unprecedented results are the product of meticulous honing of the engine’s volumetric, mechanical and combustion efficiency.

To boost volumetric efficiency, the V12 employs continuously variable-length intakes – a mainstay in F1 engine technology until banned by rule changes – which optimise performance as a function of engine speed. Similarly, the torque and power curves are optimised across the rev range. The hybrid powertrain generates total torque in excess of 900 Nm: the instantaneous torque from the electric motor is employed at lower revs and V12 engine power and torque is optimised at higher revs. The V12’s peak torque of 700 Nm is, in fact, developed at 6,750 rpm.

Additionally, the entire intake system – from the dynamic air intakes on the top of the rear wheelarches to the intake plenum – was designed to maximise internal fluid-dynamics. The engine also boasts a very high 13.5:1 compression ratio for maximum combustion chamber efficiency.

The engine’s soundtrack plays a huge role in its emotional impact: meticulous tuning has resulted in a full, harmonious sound that’s more intoxicating than ever. The equal-length 6-into-1 exhaust system was hydroformed using Inconel as in F1 to help keep overall weight down with the additional benefit of very high temperature and stress resistance characteristics.

To retain the same running gear and performance as the LaFerrari coupé in this new open-top model, Ferrari’s engineers worked on two main areas: the chassis and aerodynamics.

With the chassis, the focus was entirely on the lower section which had to be reinforced because it is subject to different stresses caused by force lines which, in the coupé, converge in the upper part.

The elimination of the roof also demanded a review of the door rotation system. The Aperta has the same butterfly doors as the LaFerrari coupé although, when fully open, they are now at slightly different angle as a result of safety-focused re-engineering demanded by its open-top configuration. This in turn led to modifications to the geometry of both the wheelarches and flanks. Specifically, a carbon-fibre insert, which incorporates an aerodynamic vent, was added to allow the doors to rotate. However, the insert itself has also become one of the Aperta’s signature styling elements, a flourish that, although absolutely distinctive, does not interfere in any way with the original LaFerrari lines.

A string of targeted modifications which, despite a small increase in weight, allow the LaFerrari Aperta to deliver the same torsional rigidity figure as the LaFerrari, thus putting the Aperta at the top of supercar category in terms of dynamic performance. 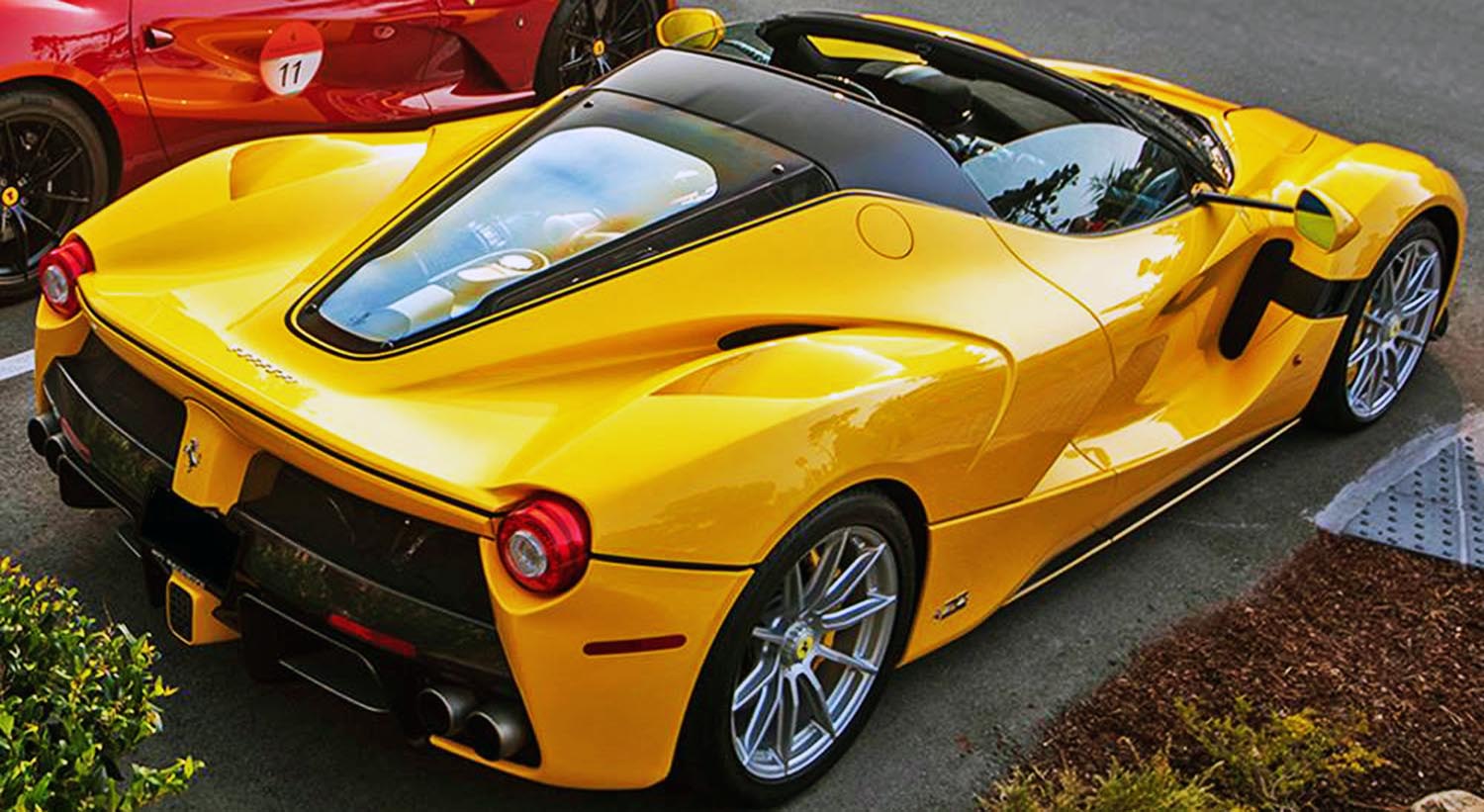 The greatest aerodynamic challenge for the Maranello technicians was to retain the coupé’s extreme performance capabilities. Their goal with the LaFerrari Aperta’s design was to achieve the same drag figure as the LaFerrari, even when driving without the hard top in place.

The new layout of the radiating masses made it necessary to create a duct that could channel air from the upper section of the front grille over the bonnet. This solution generates downforce depending on the variations in the flow momentum striking the car.

The aerodynamic package is completed by two small L-shaped flaps on the upper corners of the windscreen which, in the absence of a hard top, generate a coherent vortex that interacts with the flow being deflected towards the rear header rail, diverting it upwards to reduce the compression on the rear section of the cabin, thereby reducing drag. This system ensures that the open-top car’s drag is similar to the coupé version.

In terms of open-top aerodynamic comfort, an innovative integrated system was developed. The high-speed air flow that would otherwise enter the cabin from the top of the windscreen is captured by an angled wind-stop fixed to the parcel shelf. The wind-stop is angled to channel the flow through spaces in the car’s interior structure before exiting at a slower speed behind the passenger seats. This delivers a level of interior comfort in line with other convertibles in the Ferrari range without increasing drag.

LaFerrari Aperta retains intact the avant-garde styling of the coupé, a model that represents the peak of the synergies between the engineering and development departments and Ferrari’s Styling Centre. The body’s shape is very sculptural and aerodynamically functional, with an innovative formal language. Its fluid forms lend a sense of huge power, while the F1-inspired nose and the muscular power of the tail section reveal the car’s extreme, sporty character.

Seen from the side the LaFerrari Aperta has a sharp, downward-sloping nose and a very low bonnet which emphasises its muscular wheelarches. The result is strongly reminiscent of the gloriously exuberant forms of late-1960s Ferrari sports prototypes, such as the 330 P4 , a model that was also built in open and closed coupé versions. The ratio of the front and wheelarch dimensions are also very much in line with Ferrari tradition.

The styling is underscored by a discrete model-specific livery with just a few graphic accents in a contrasting colour defining the main styling contours. Equally, the cabin features detailing that coordinates with the livery, as well as new seat upholstery in which leather is combined with Starlite Alcantara. 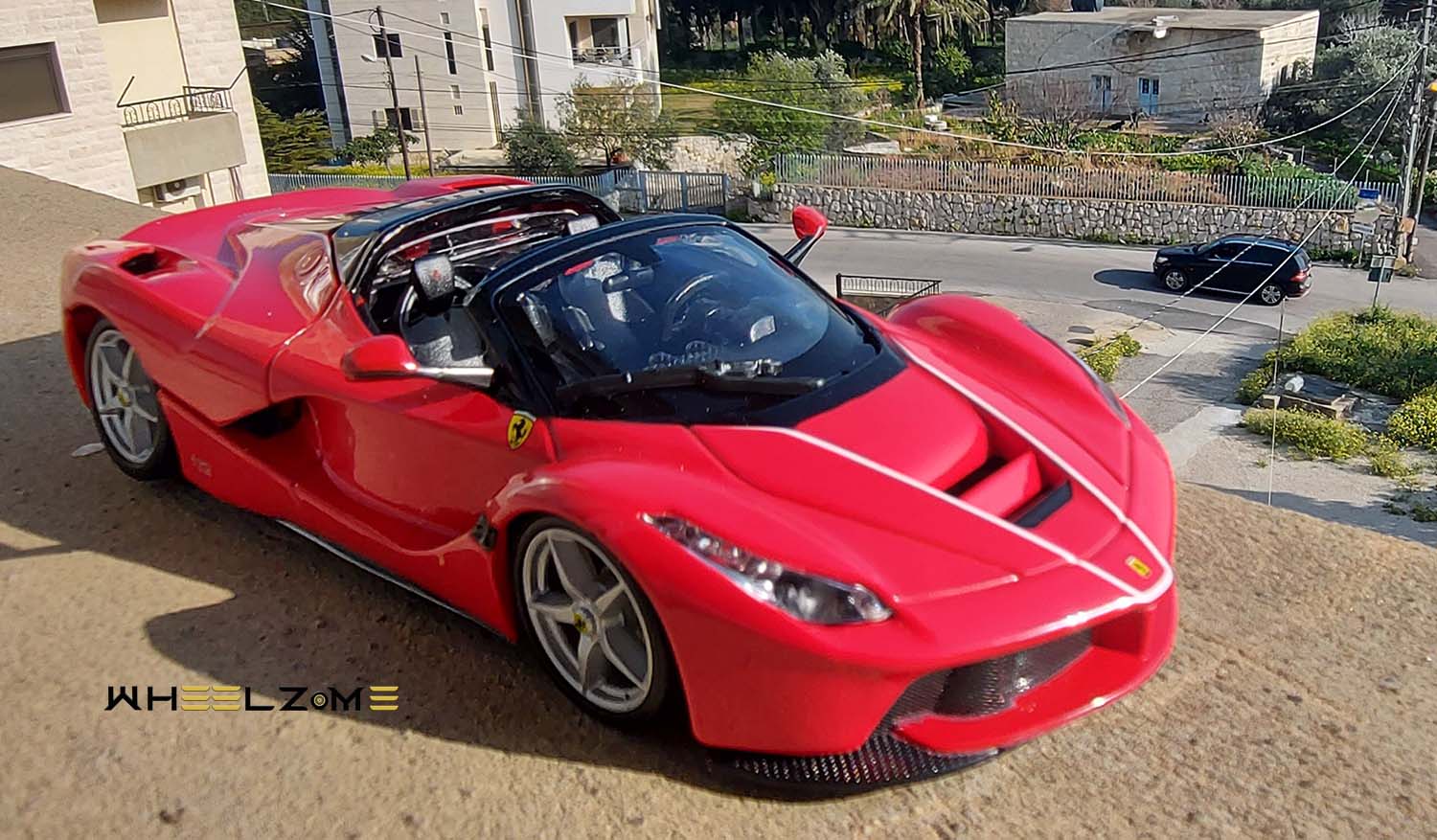 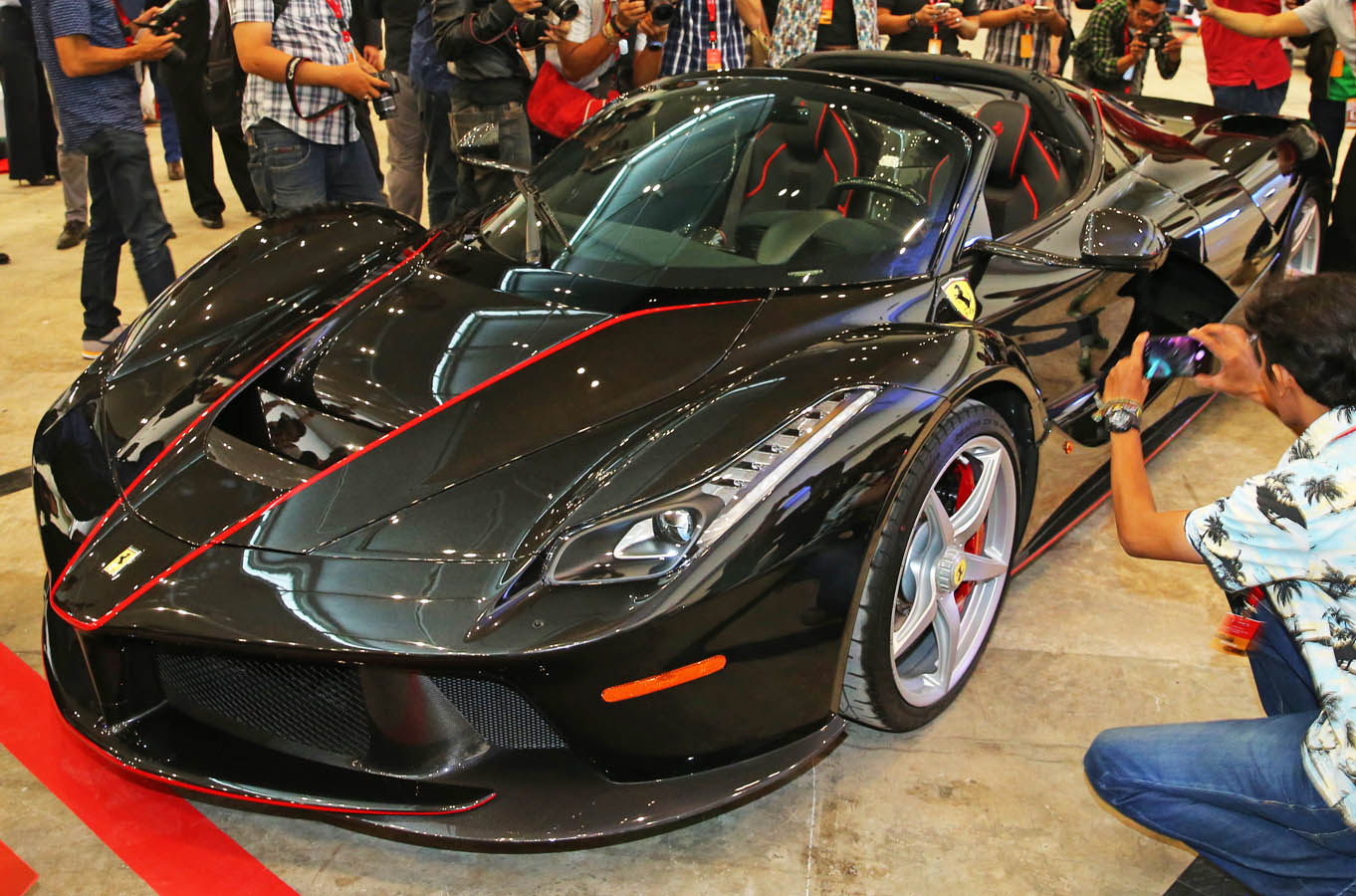 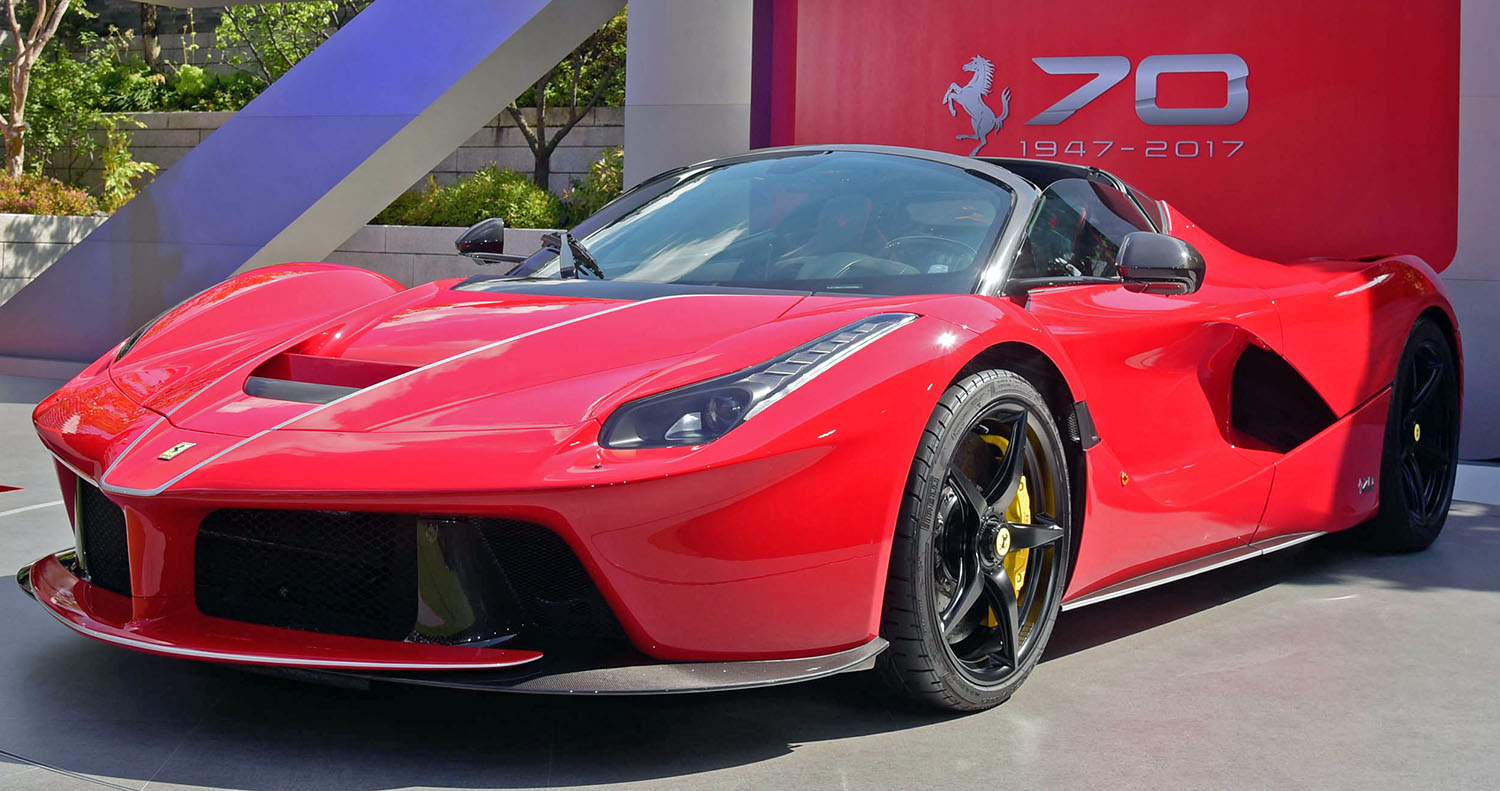 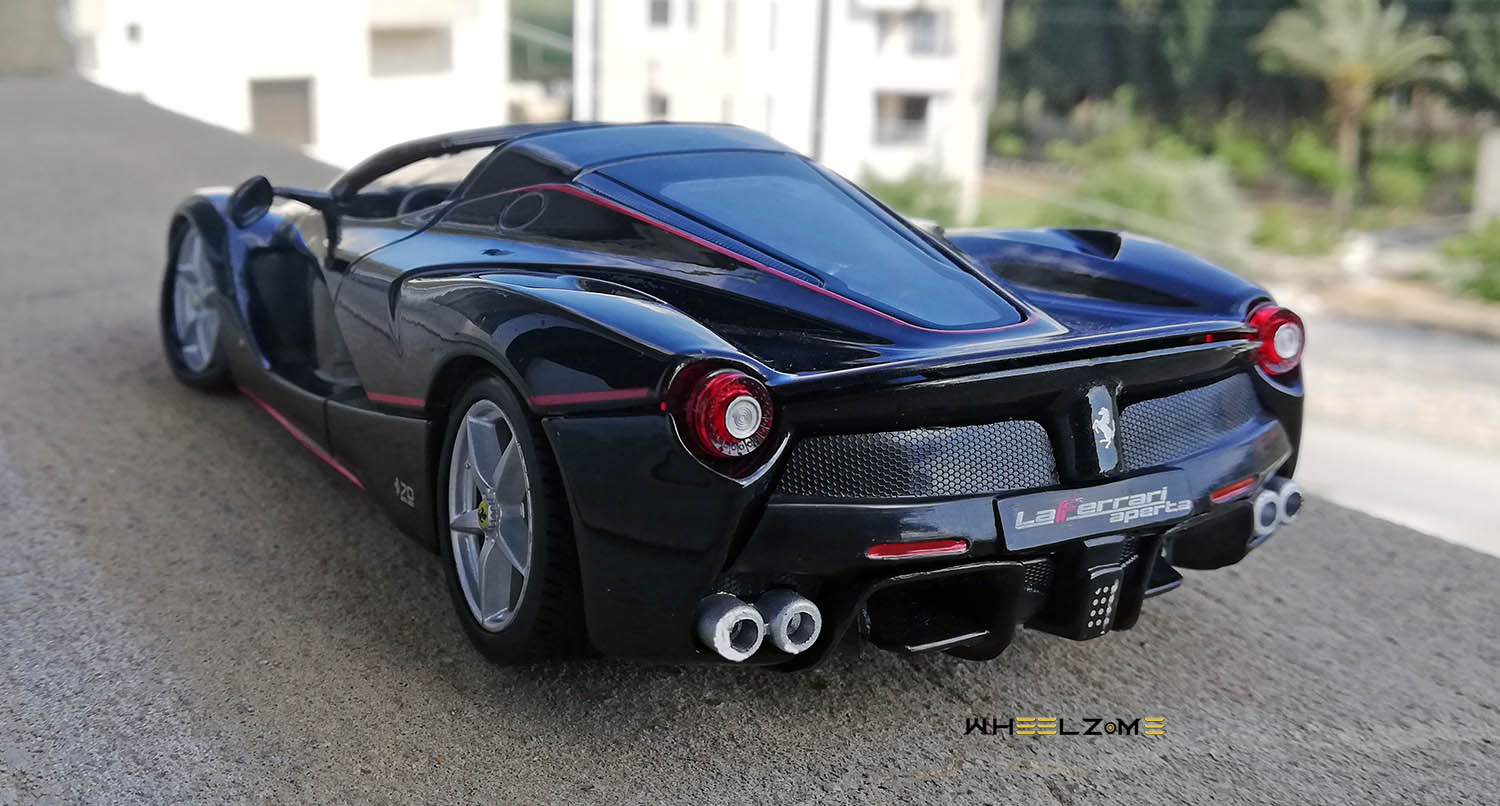 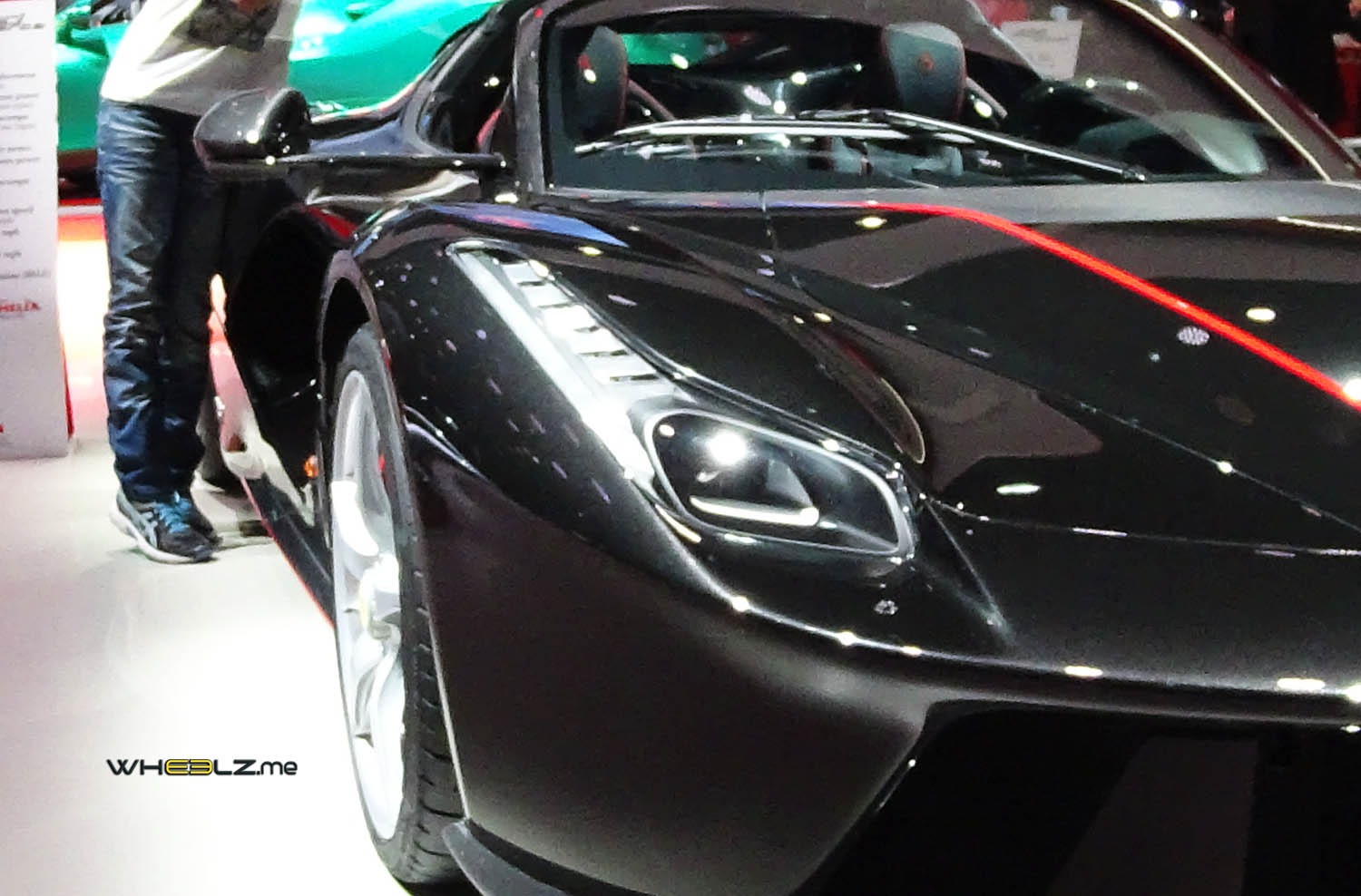 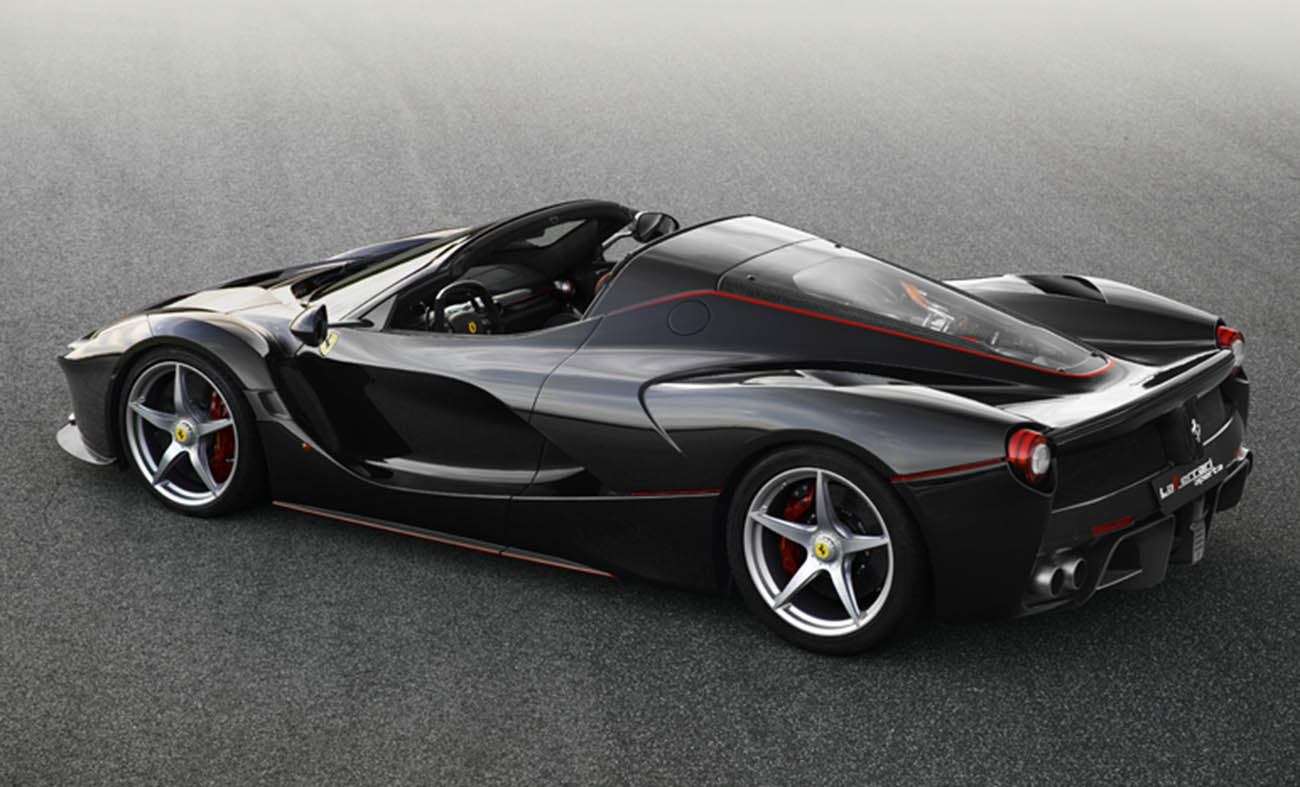 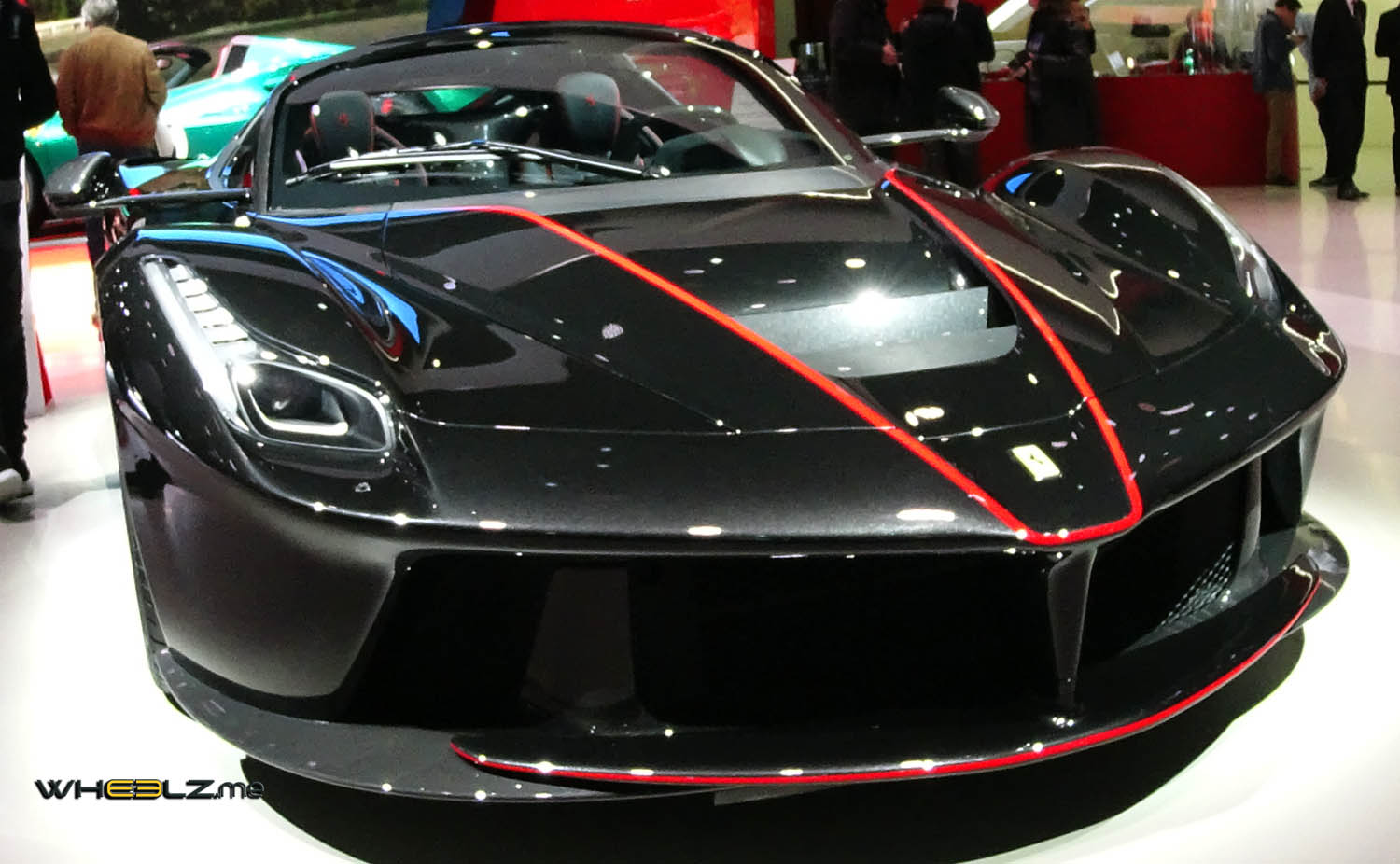 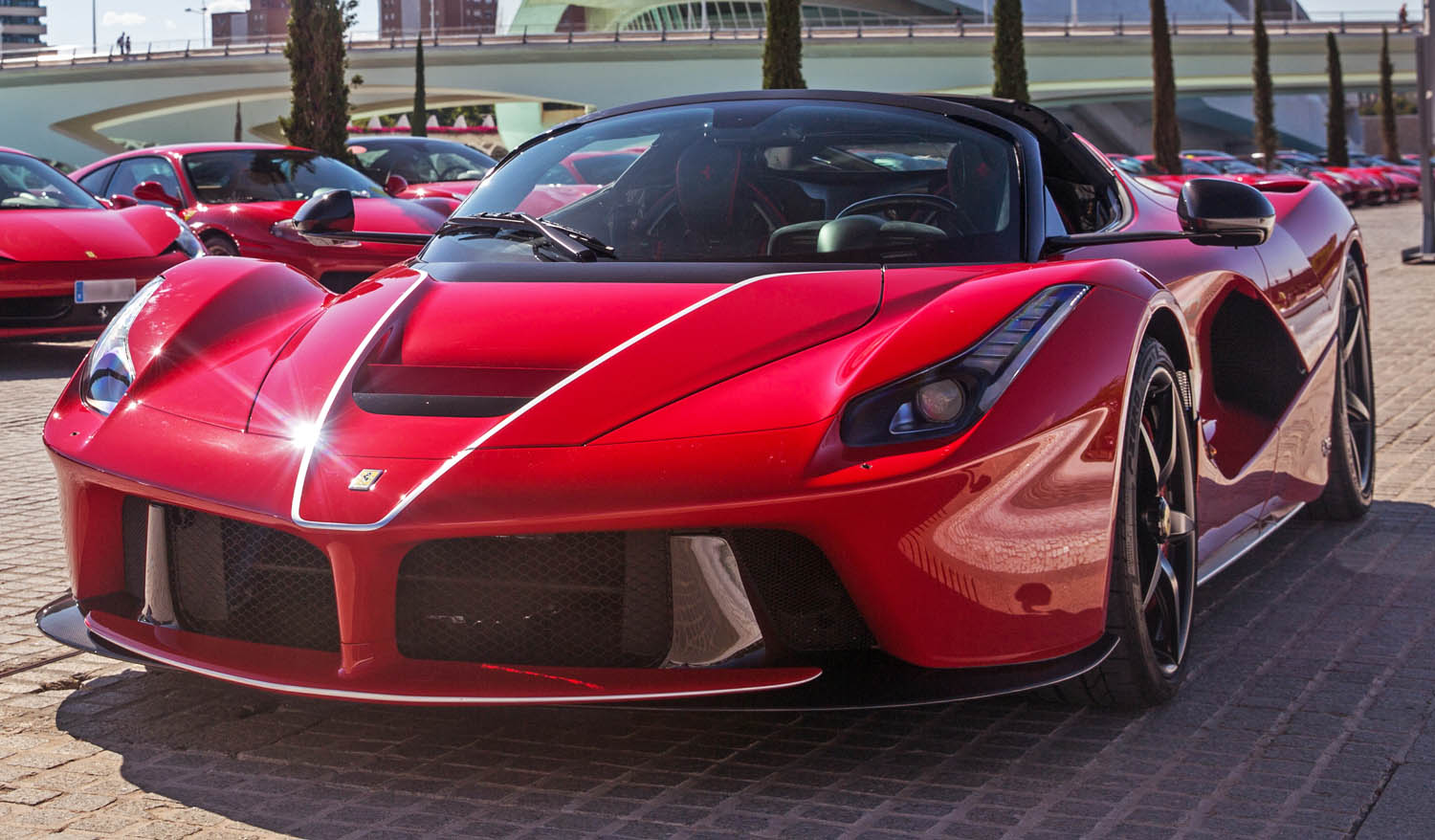 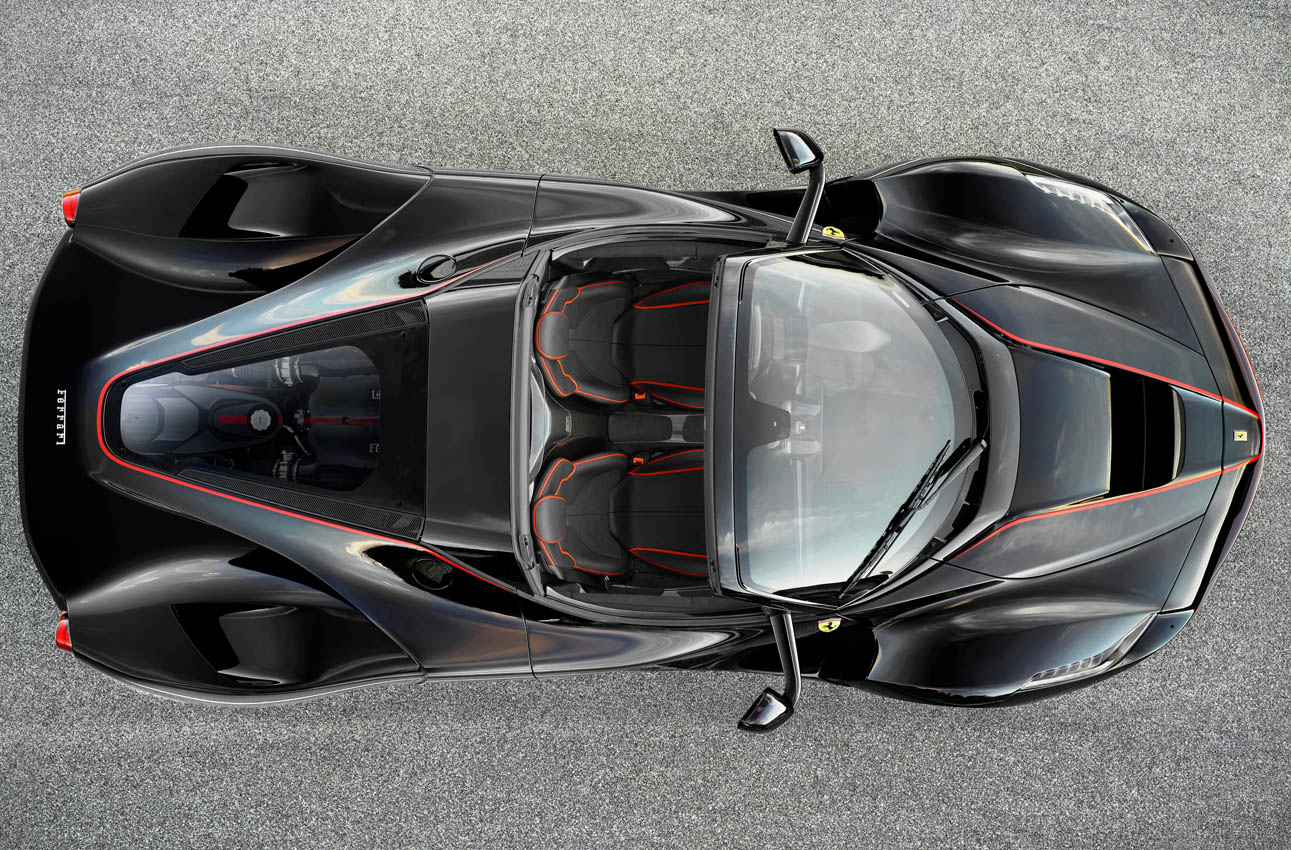 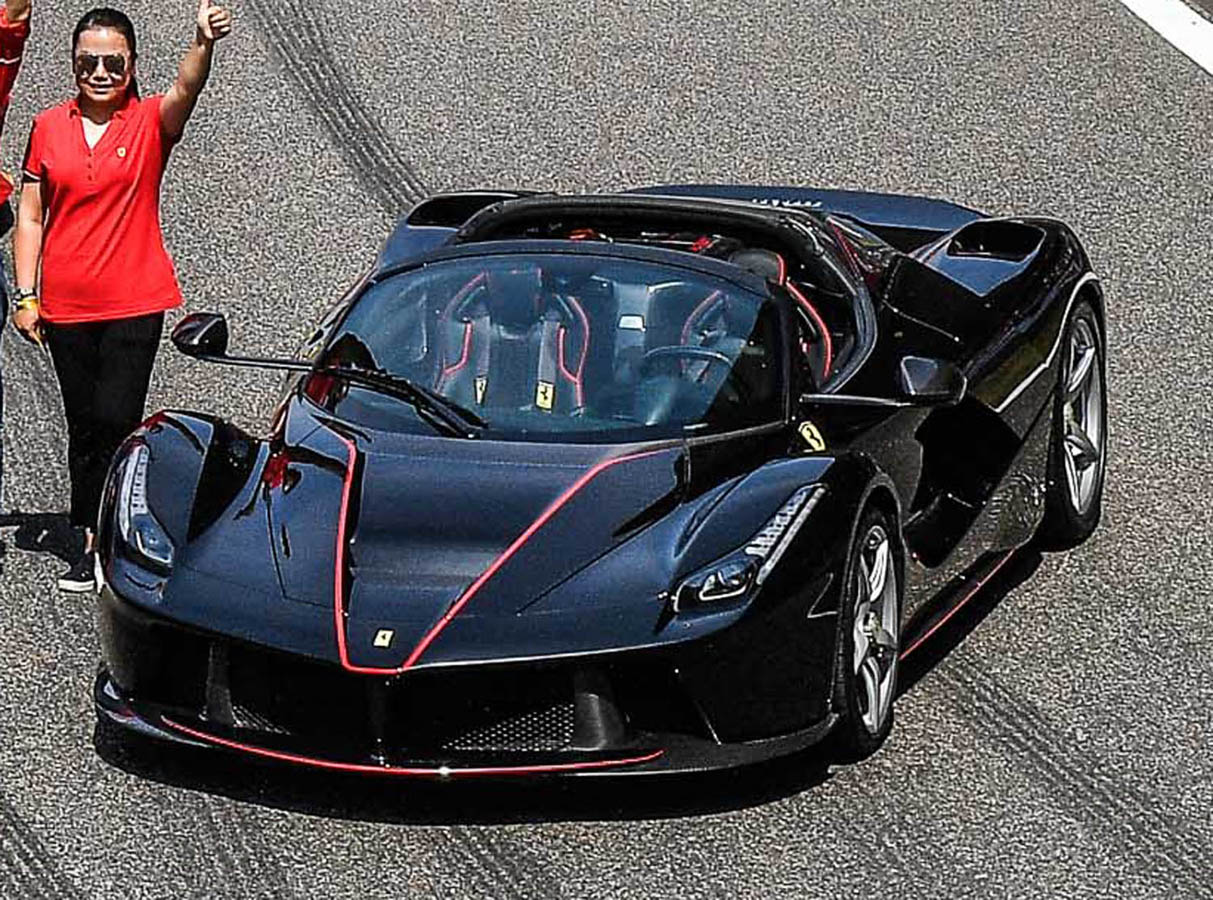 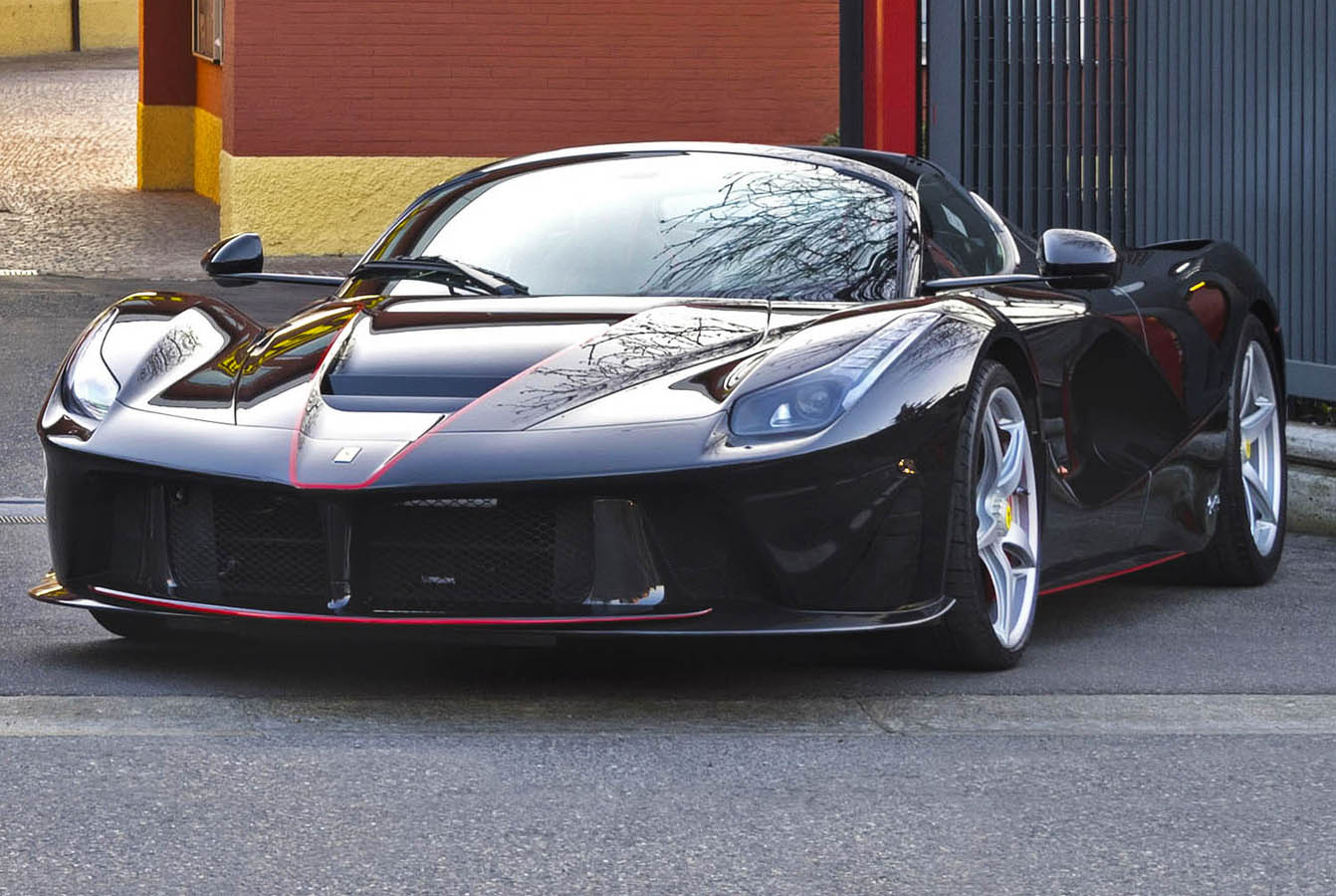 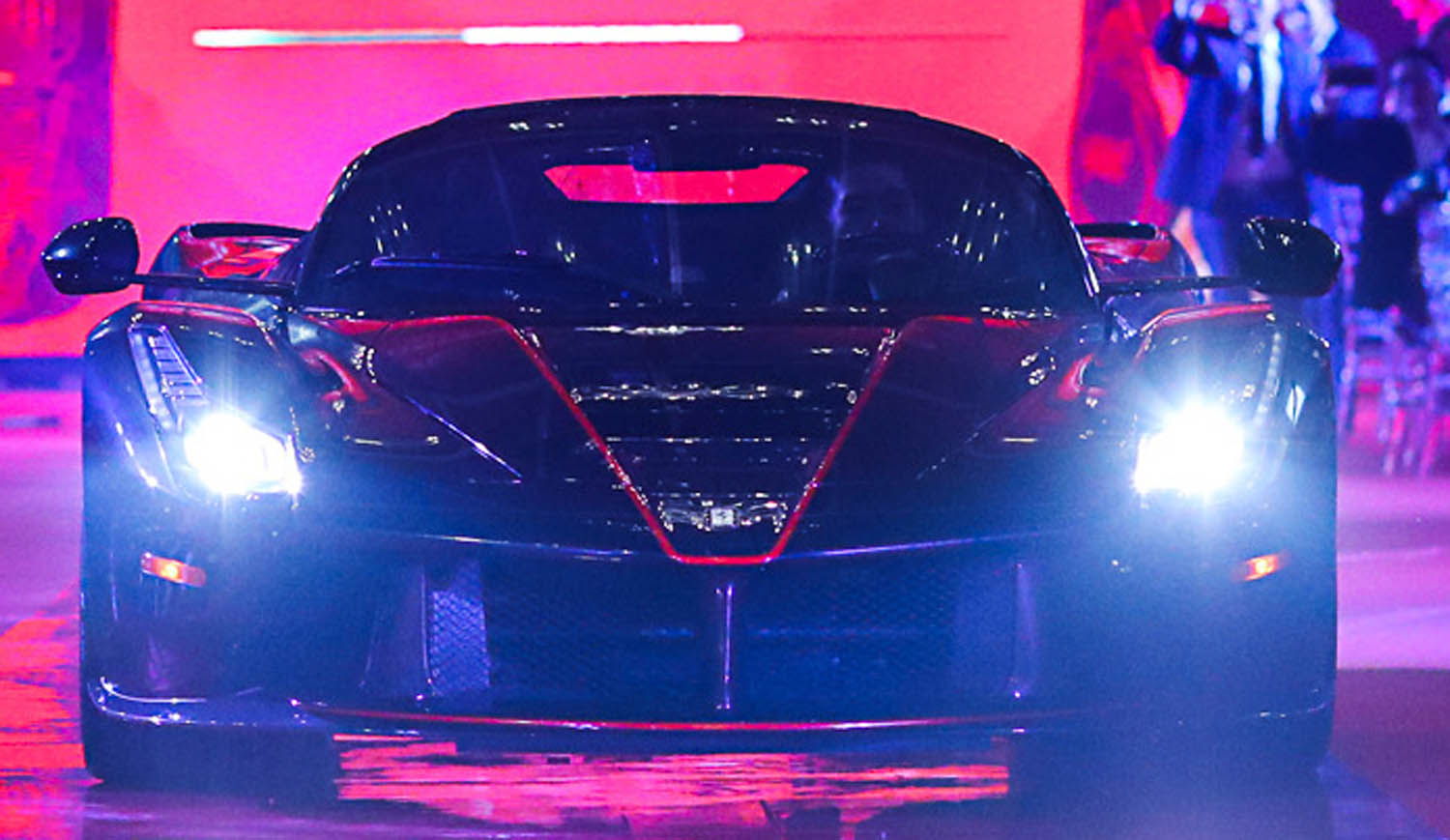 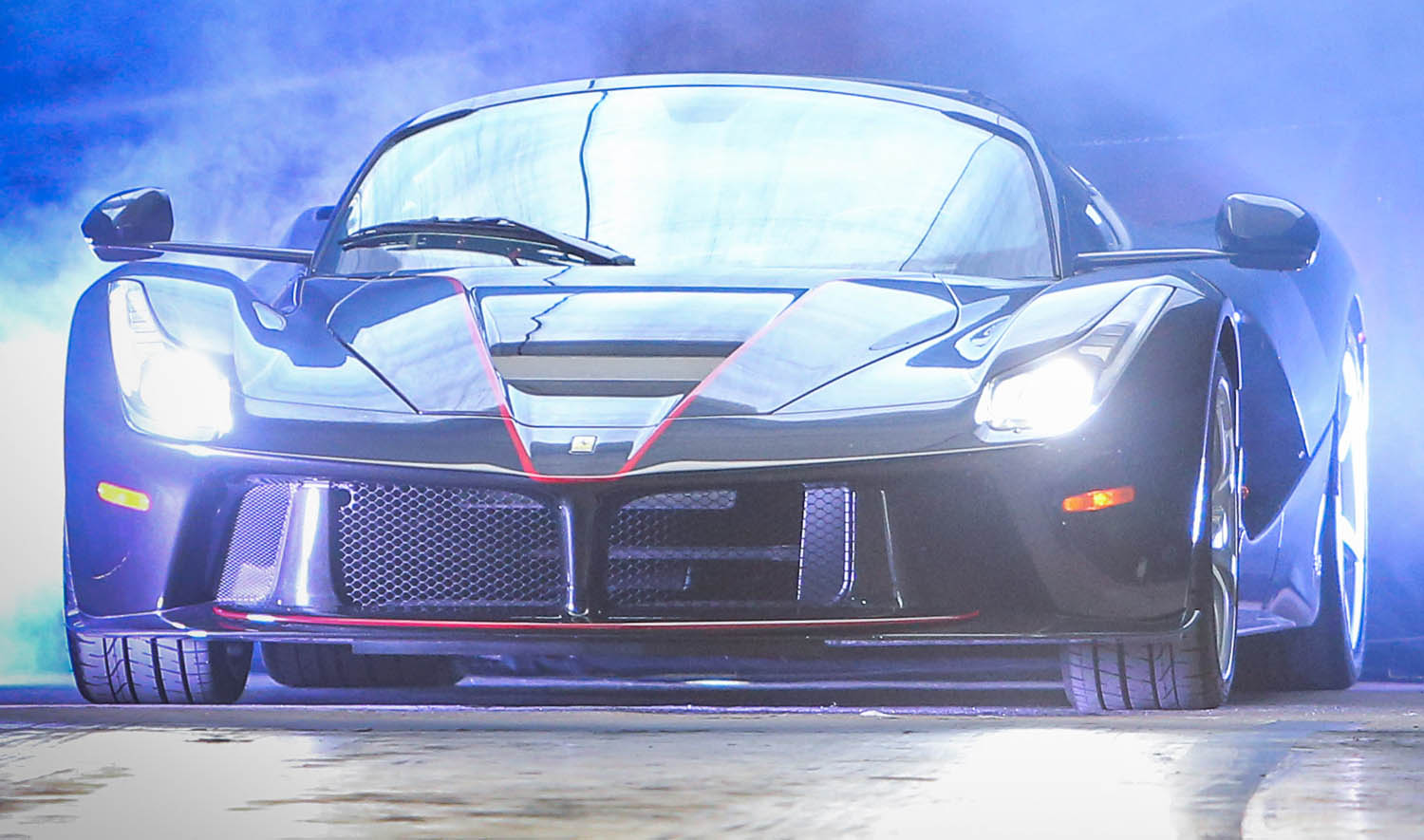 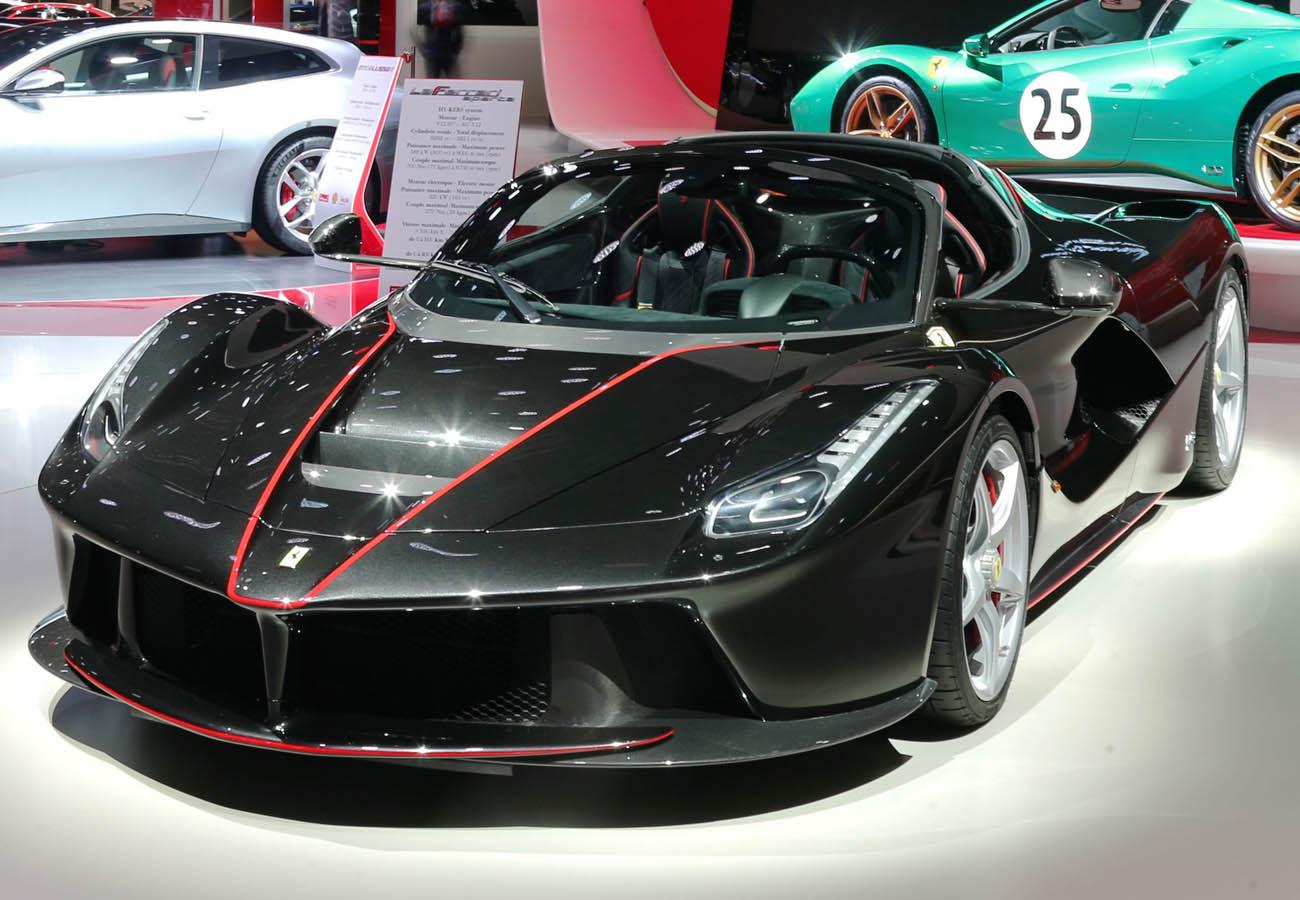 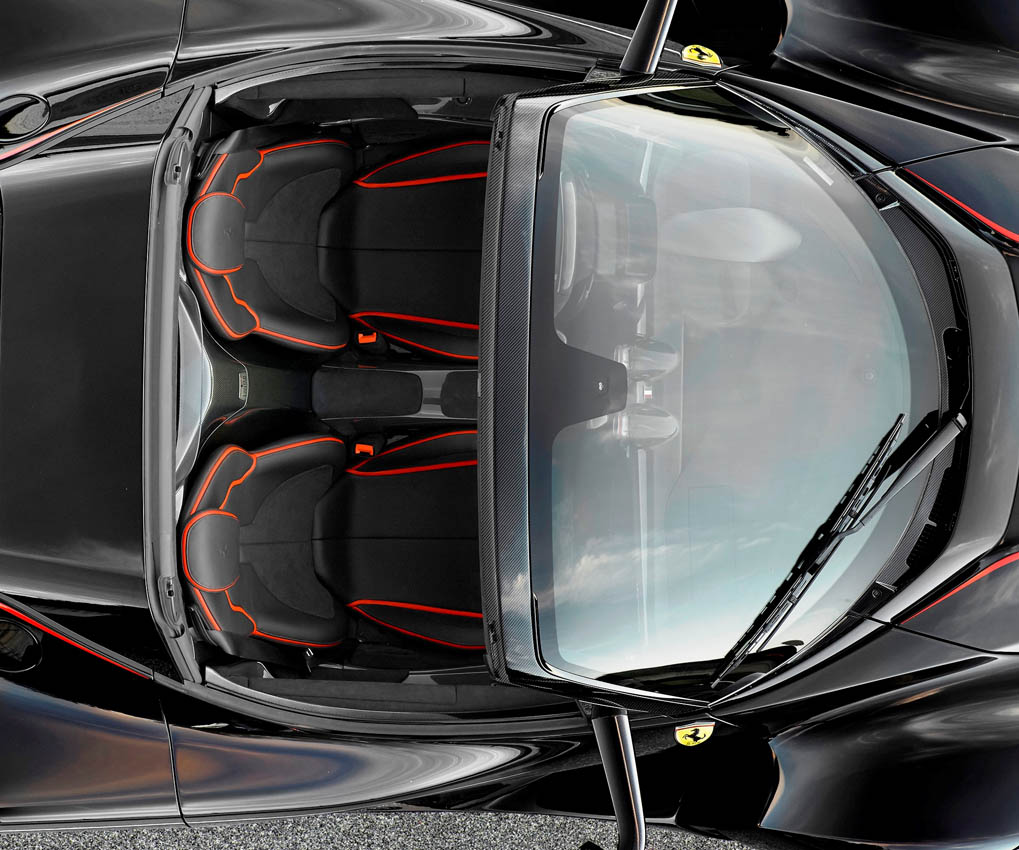 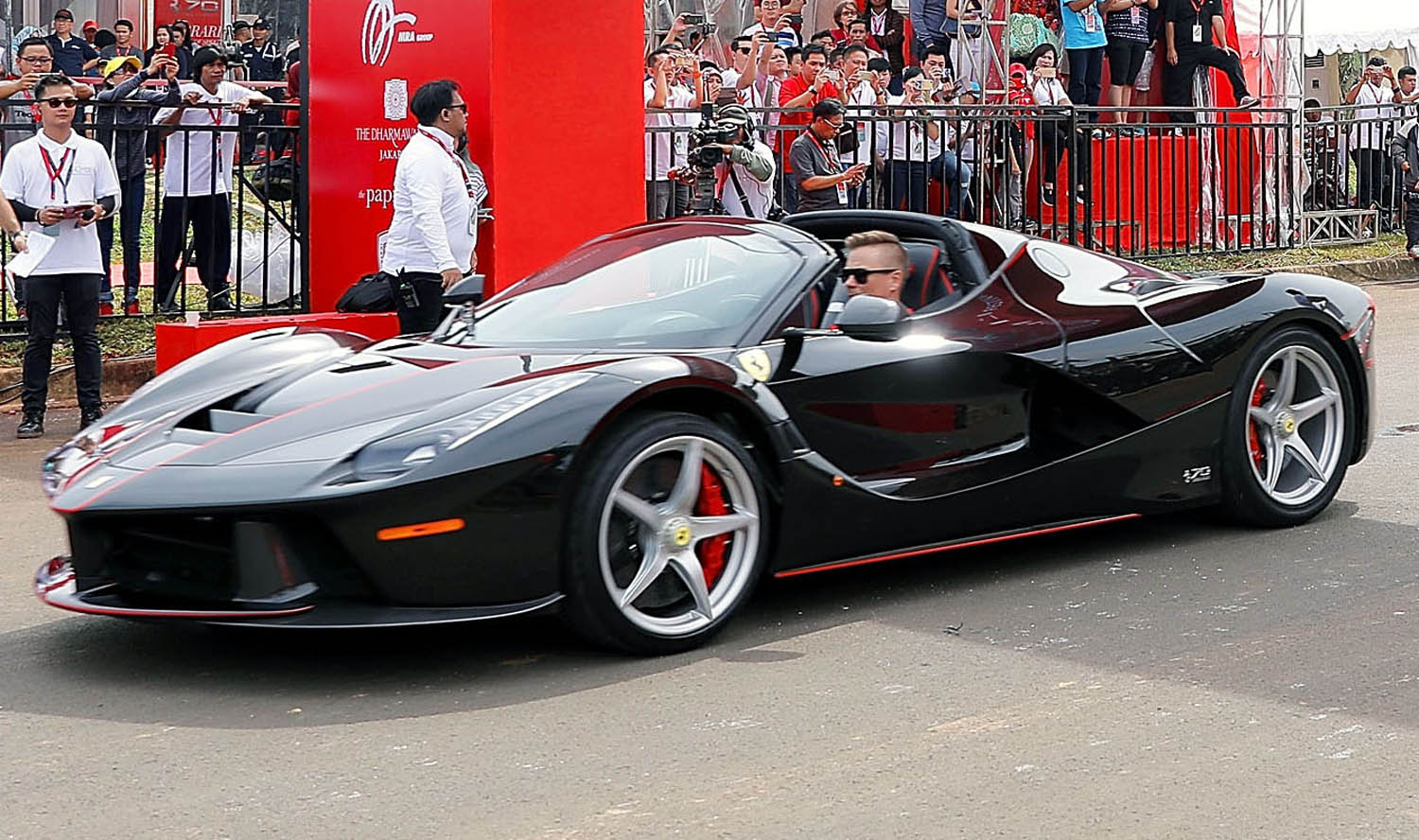 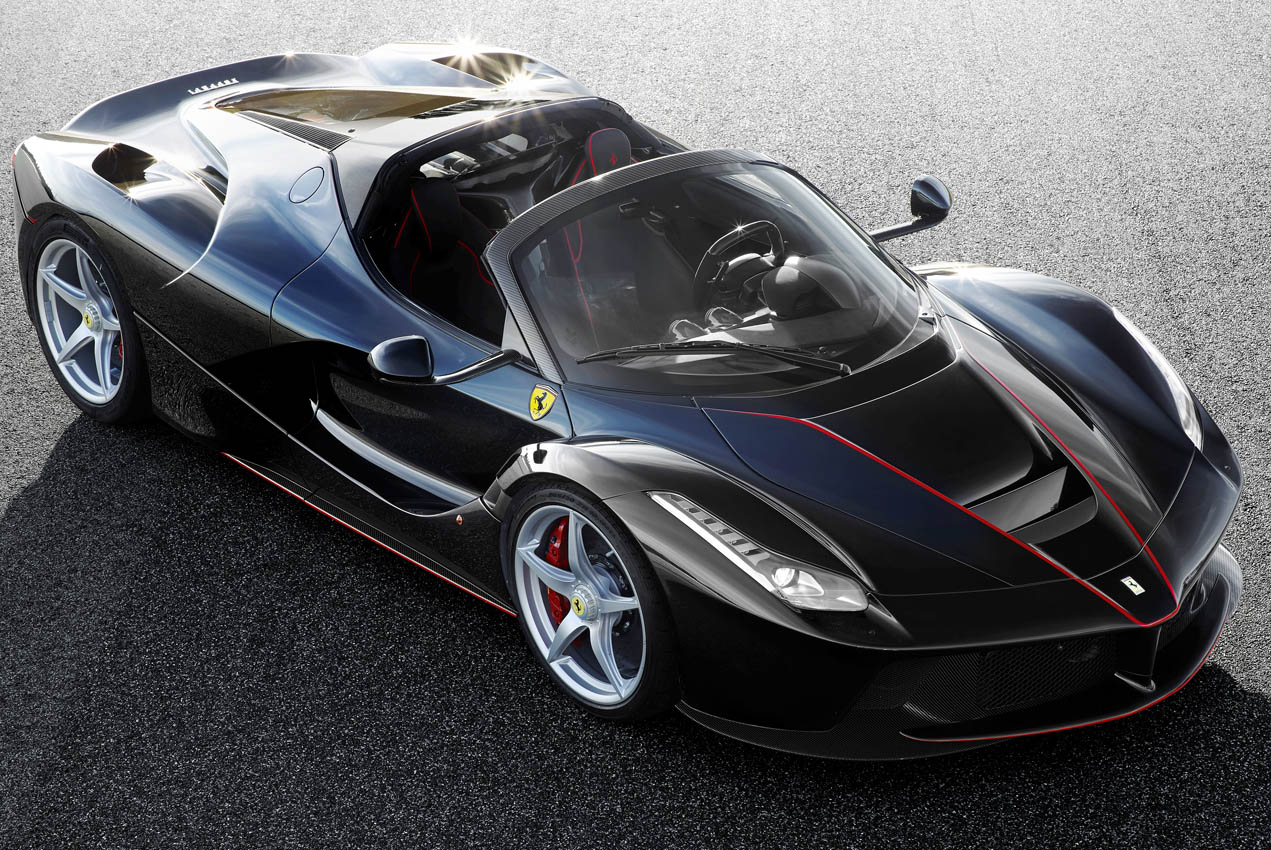 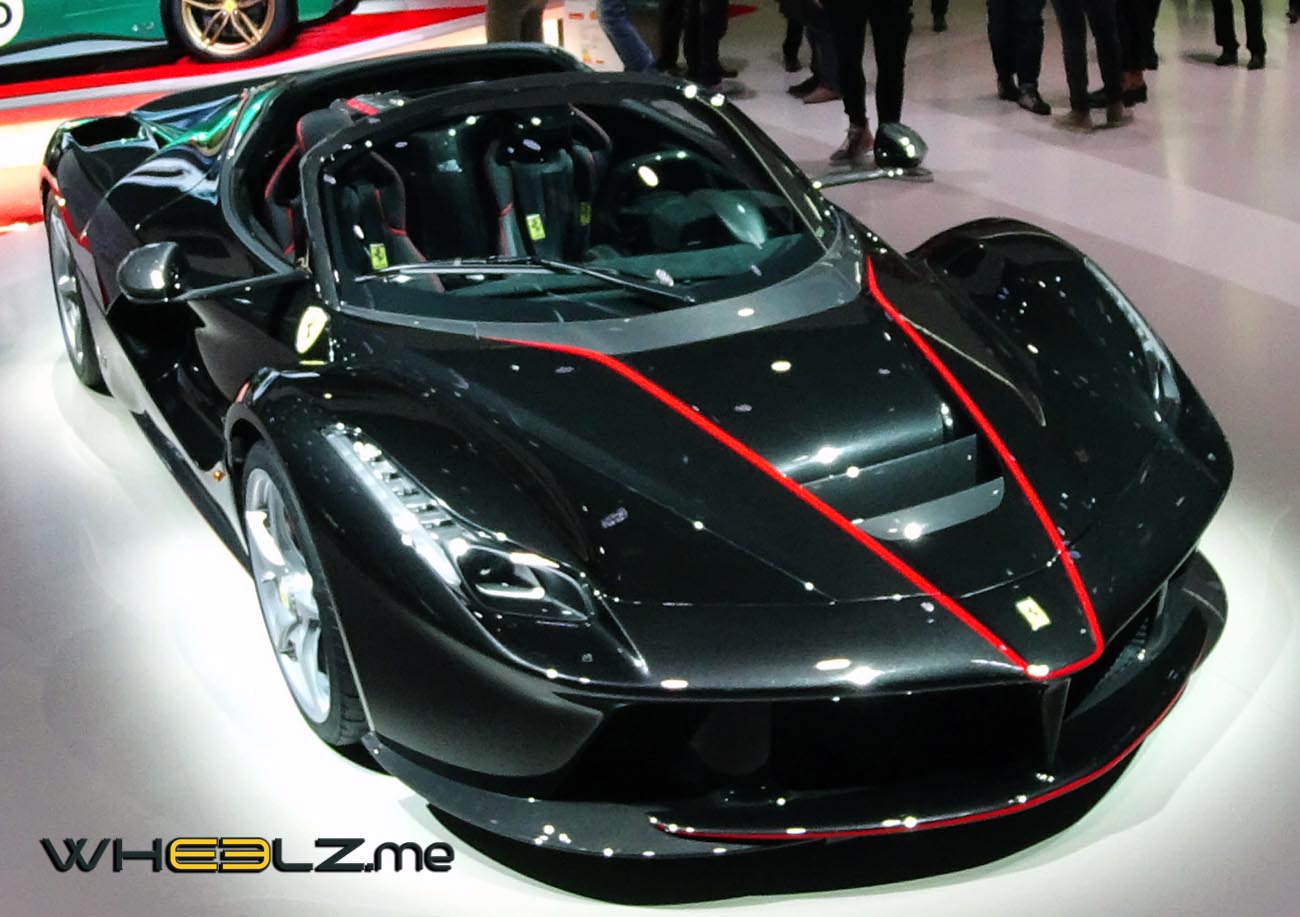 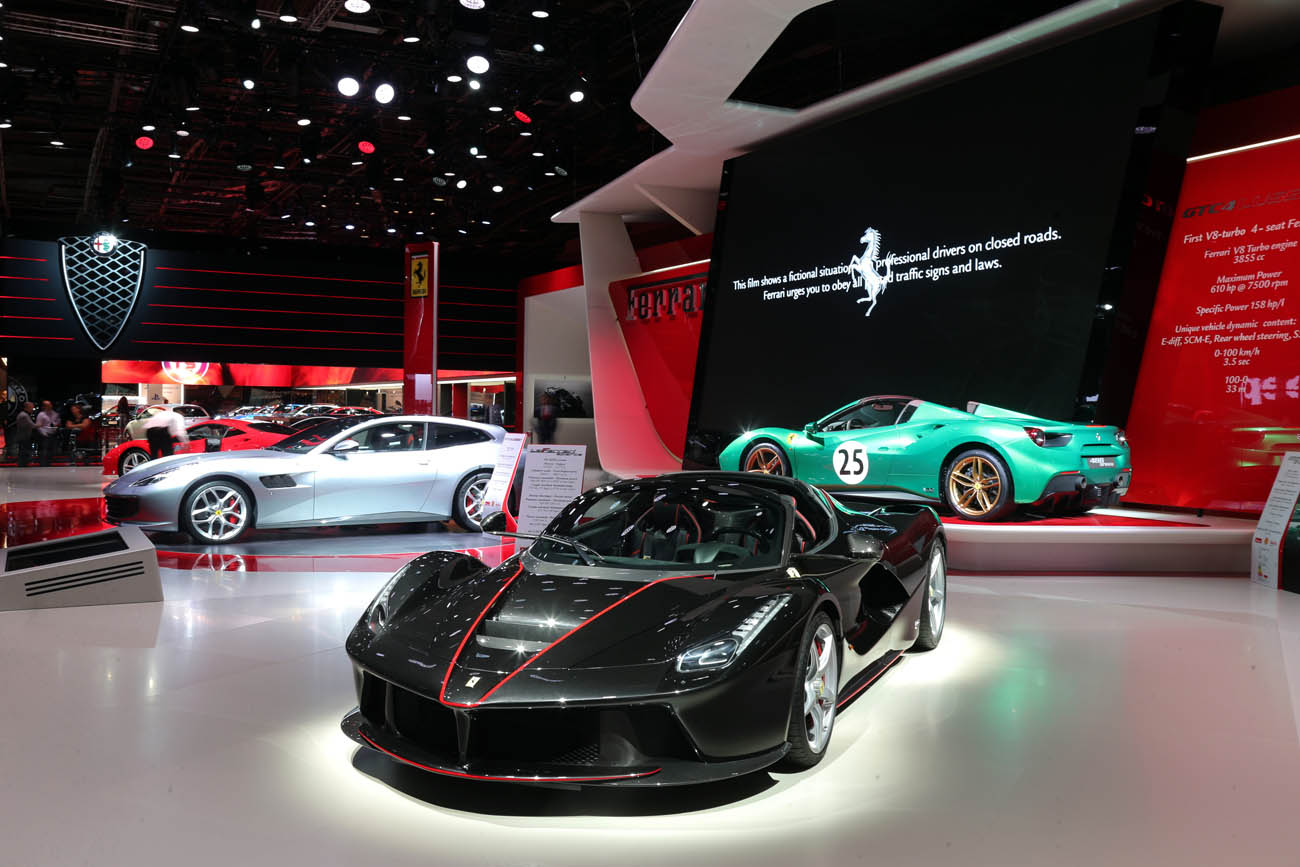 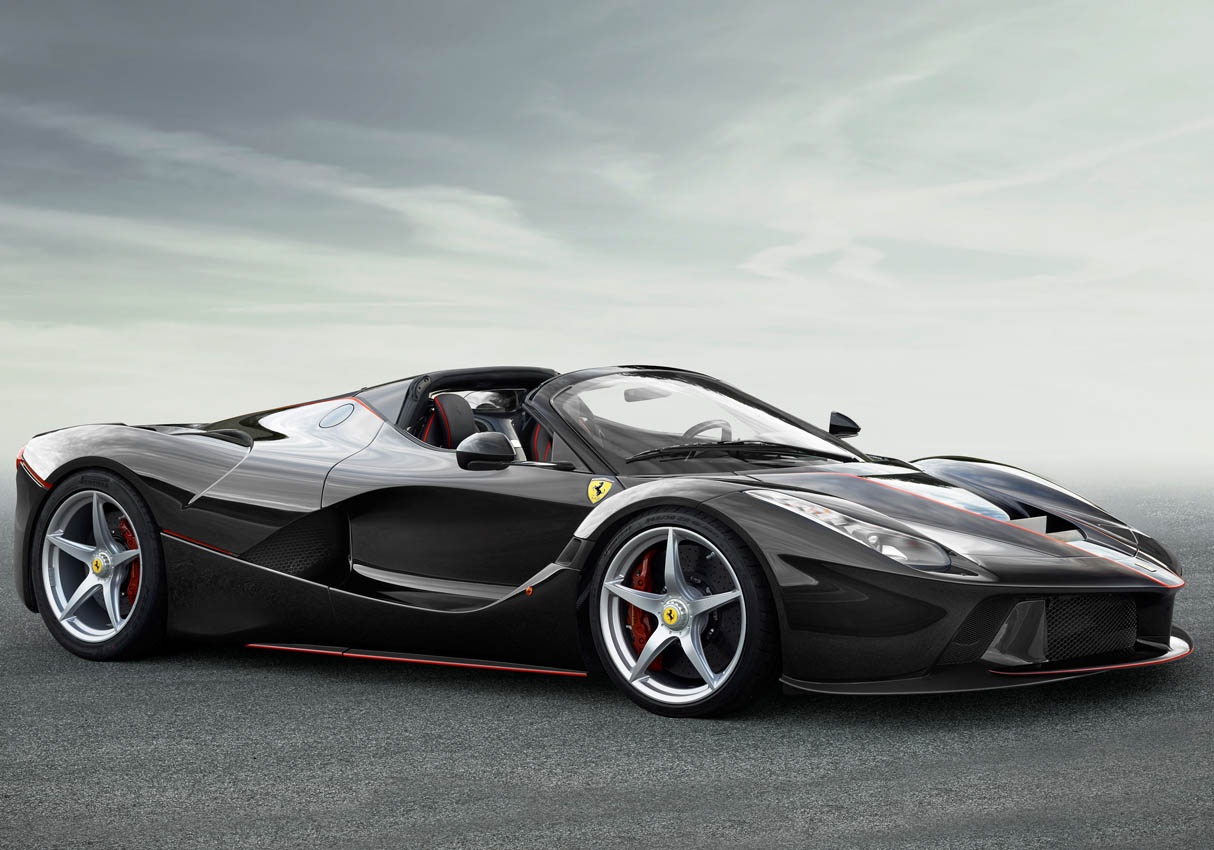 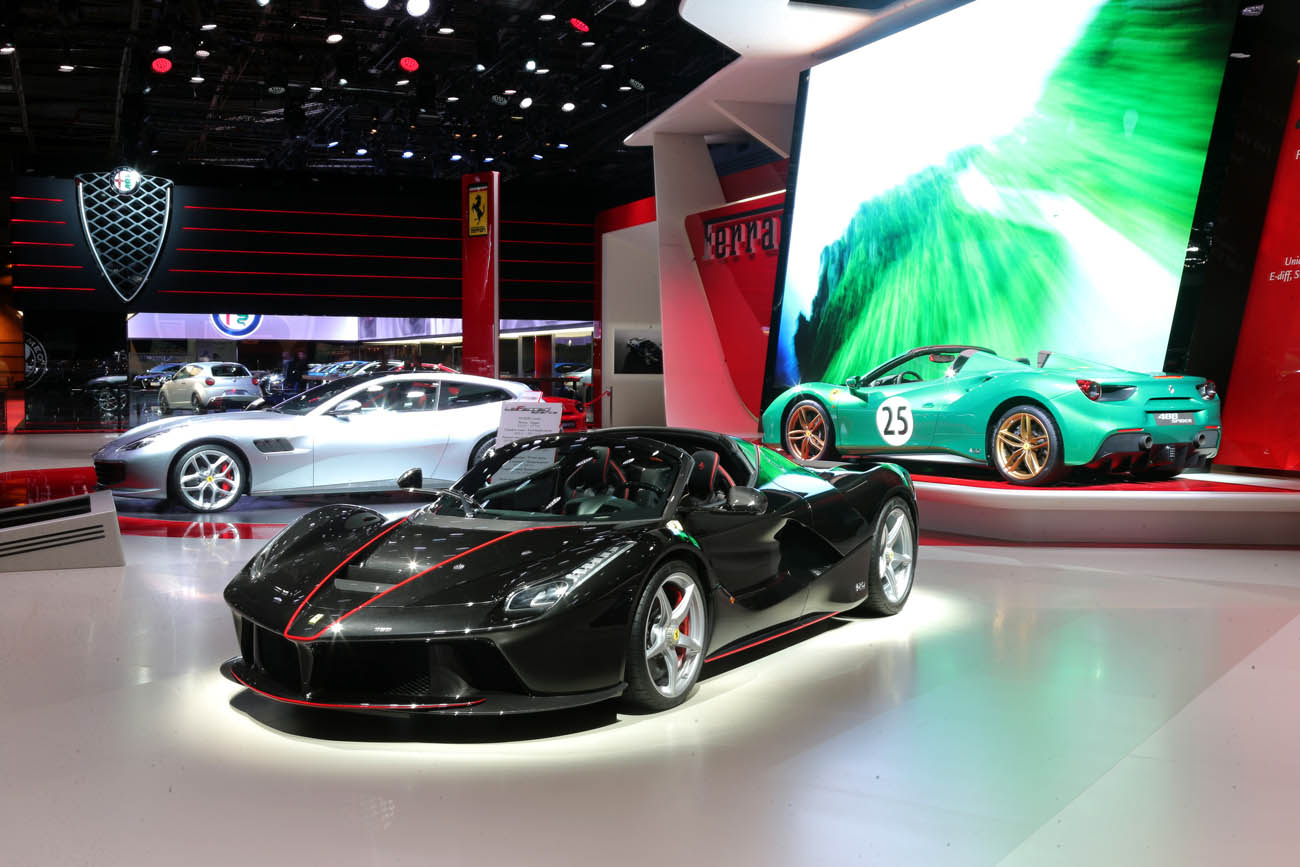 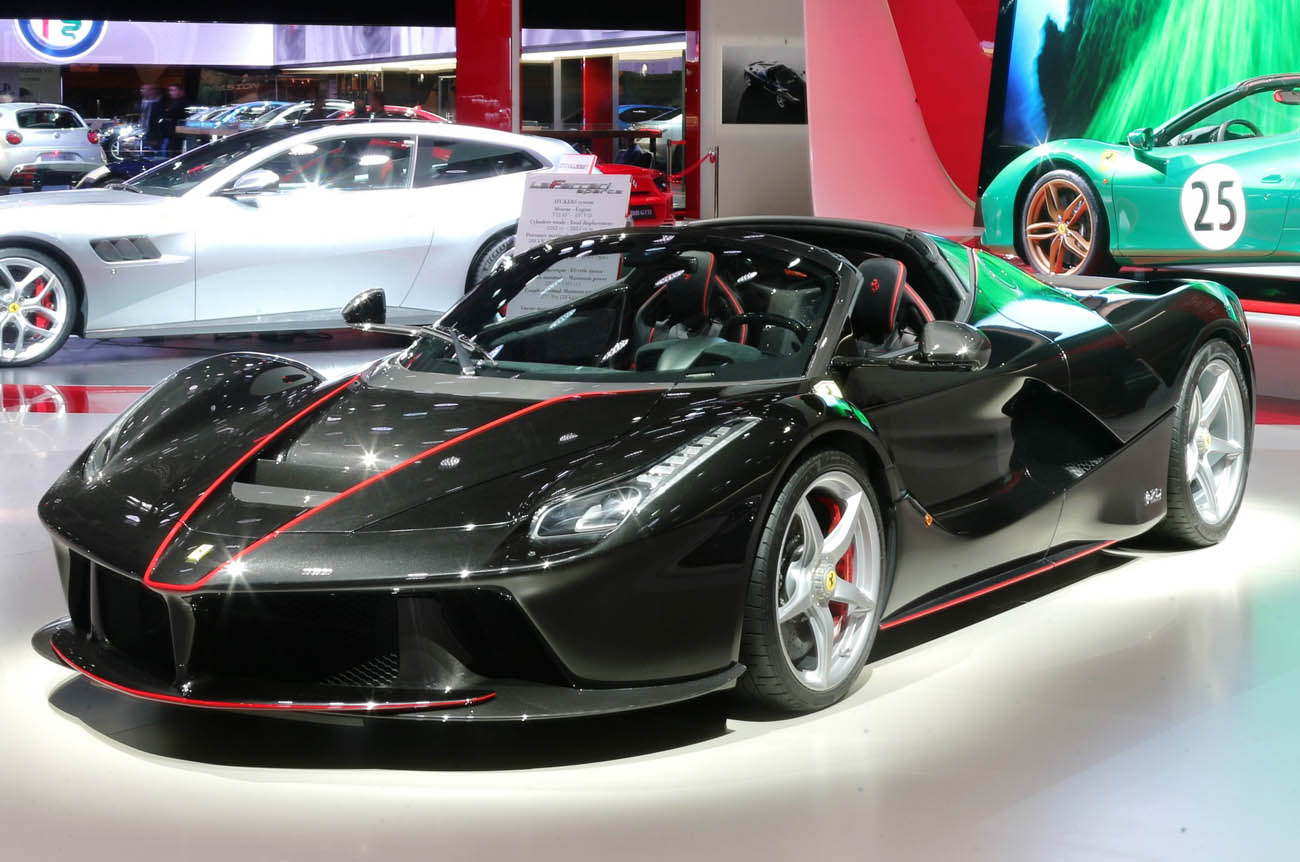 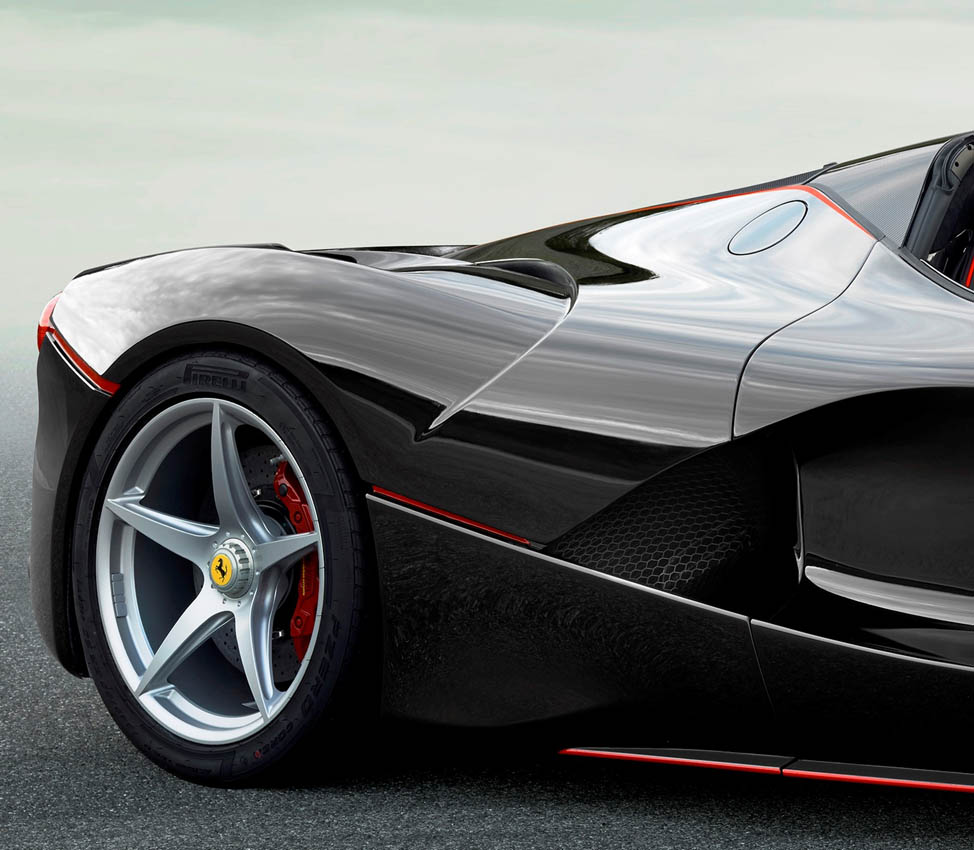 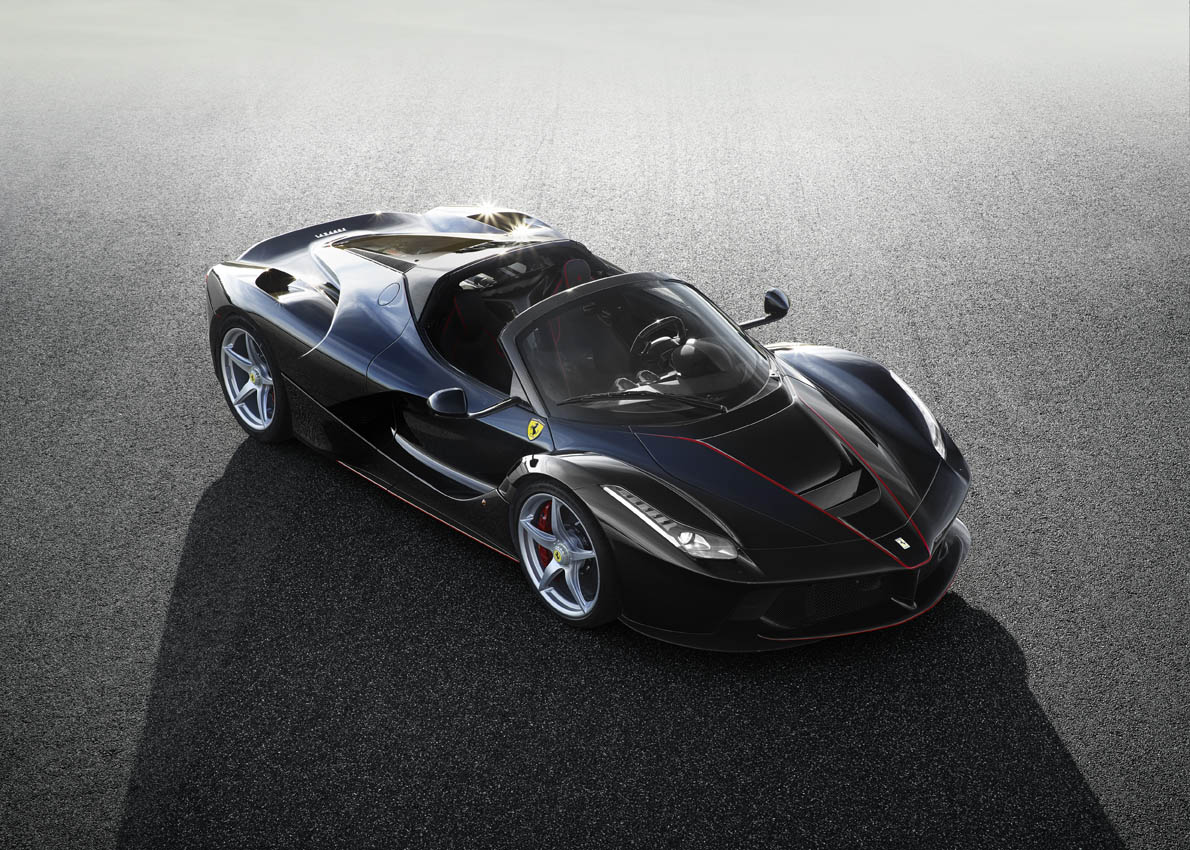 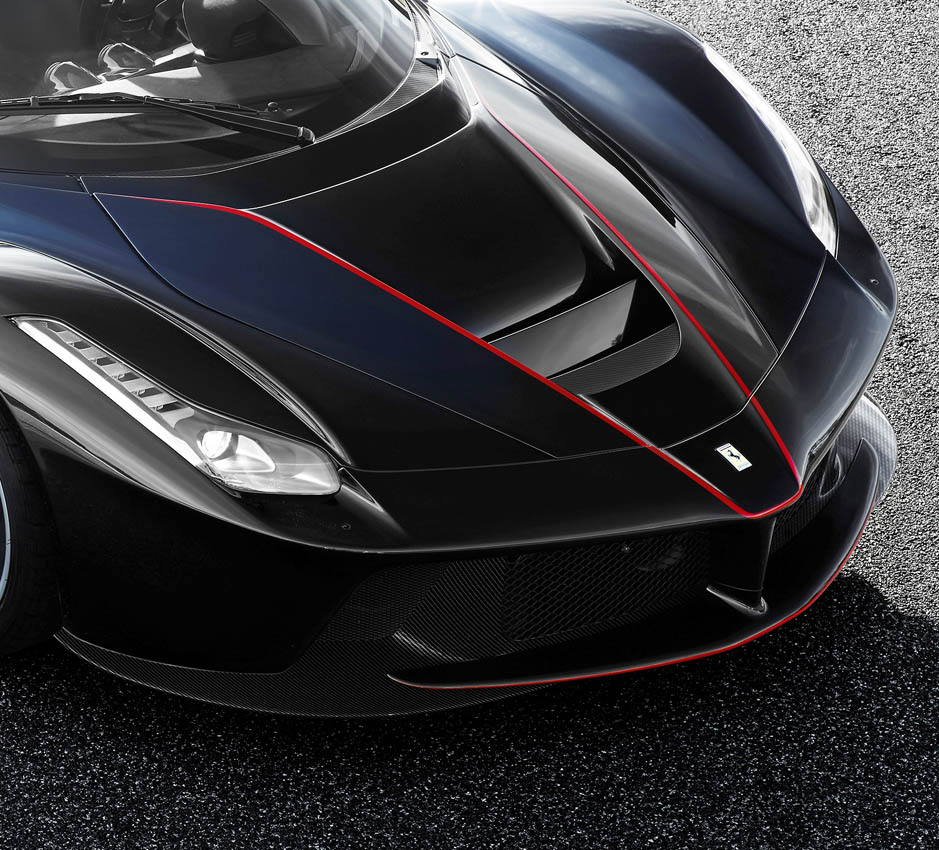 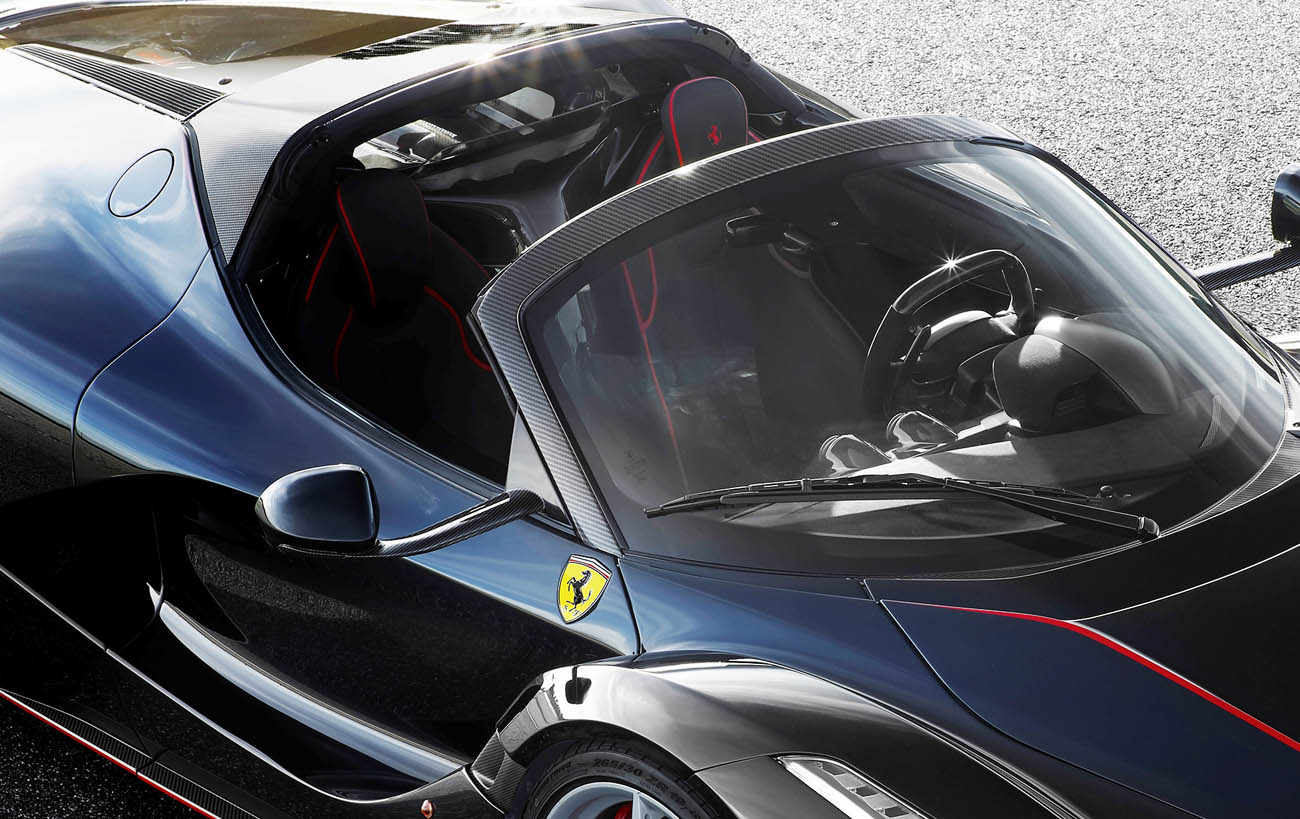 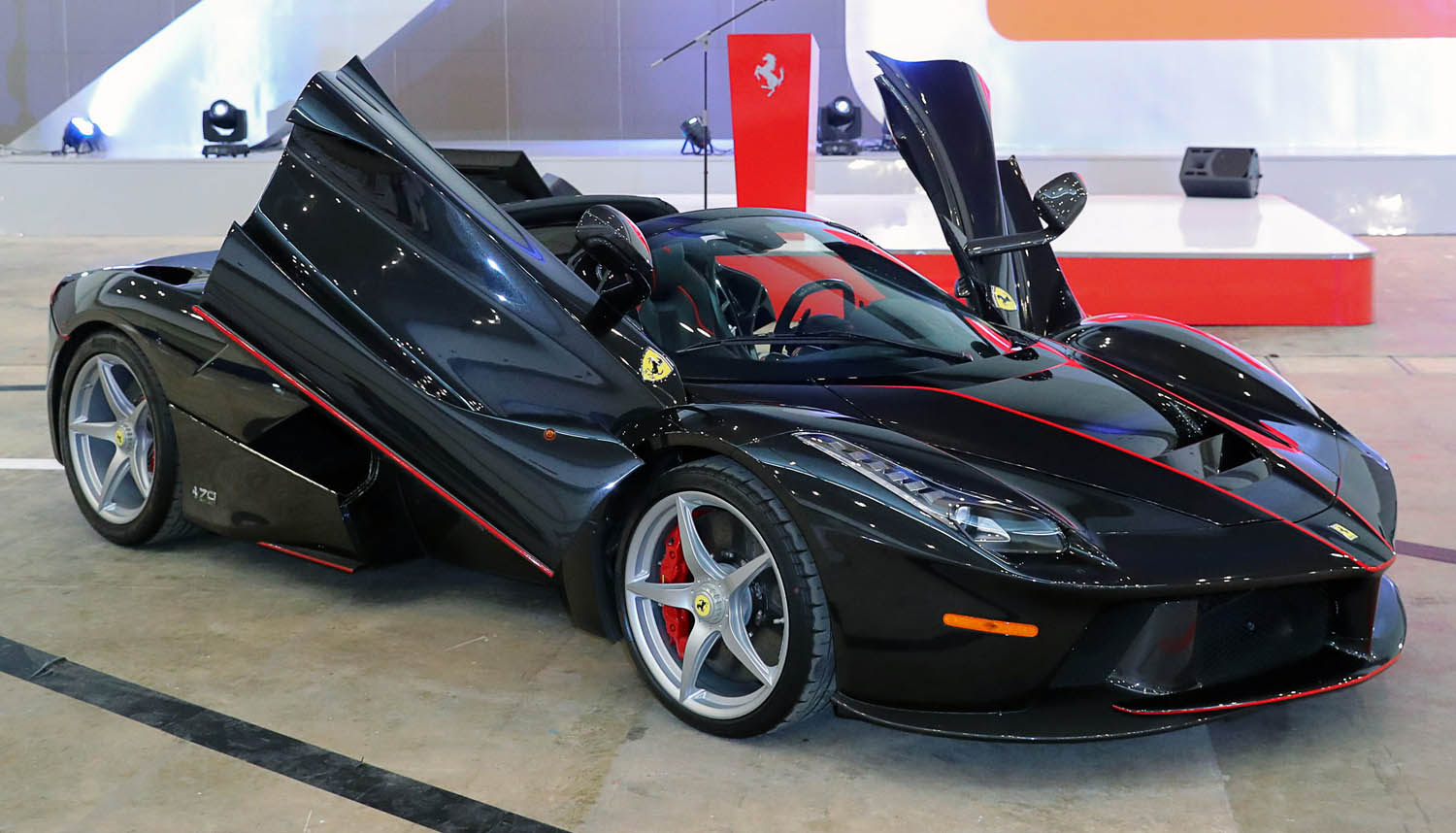