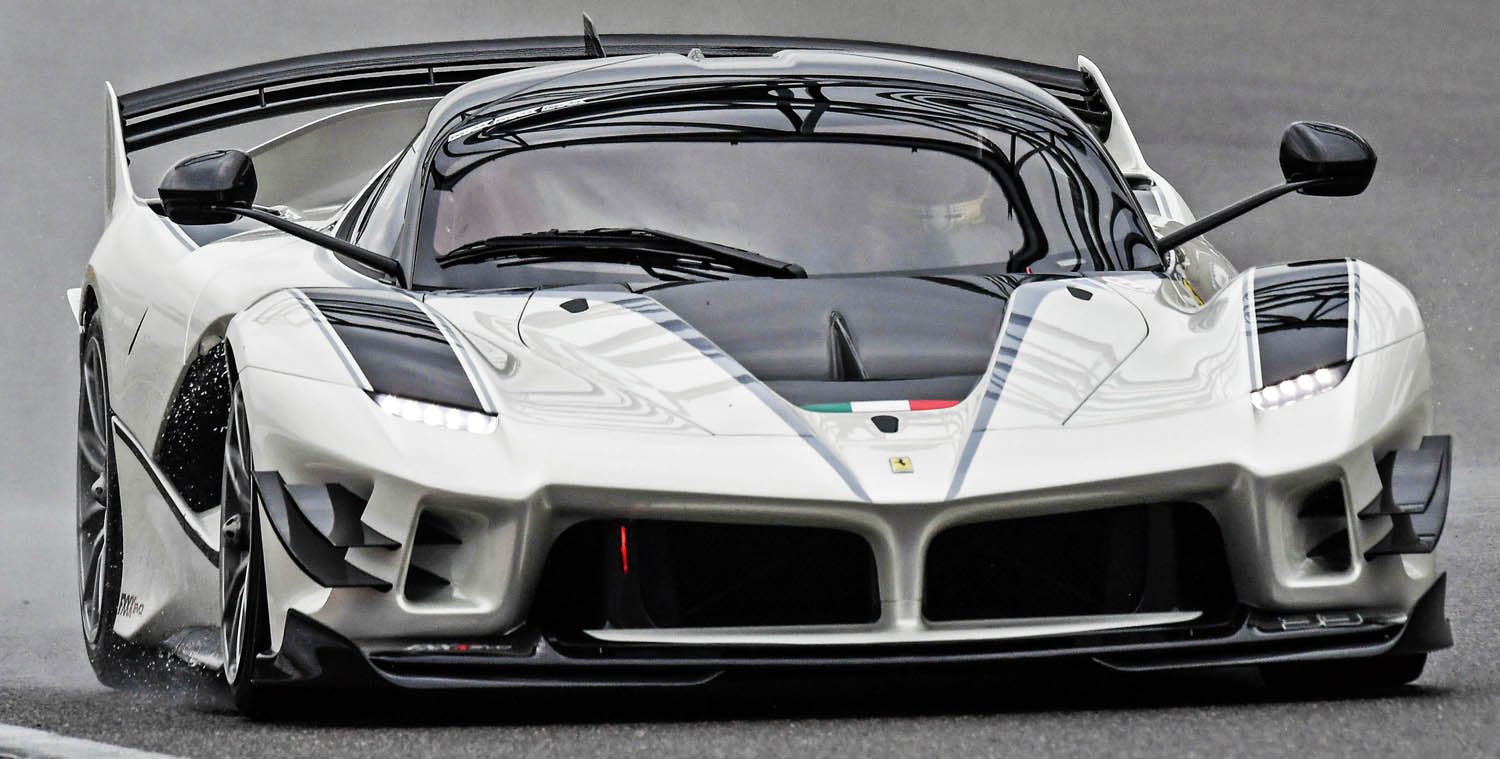 The Finali Mondiali provided the backdrop to the world premiere of the new Ferrari FXX-K Evo which will be available both as an extremely limited-run model and as an upgrade package for the existing XX cars.

This latest arrival marks a significant evolution of the XX programme launched in 2005 with cars developed specifically to play an active role in the eponymous research and development programme which itself has become a byword for innovation and uncompromising performance.

As was the case with the Evo versions of the FXX and the 599 XX, the Ferrari FXX-K Evo benefits from an extensive package that applies innovative concepts derived from all of the various track categories in which Ferrari competes with its cars: the Formula 1, GT3, GTE and Challenge, the latter being the single-make championship bearing its name.

Derived from the racing world and adopting track-specific content, the FXX-K Evo, like all the previous XX cars, is not homologated for road use and will not be used in competition outside its dedicated programme.

Mirroring the vocation of its predecessor, it, however, is aimed at a small, highly-select group of Ferrari Clients: supercar enthusiasts eager to share the development of technologically-innovative content with the Prancing Horse technicians, through driving a closed-wheel laboratory car. 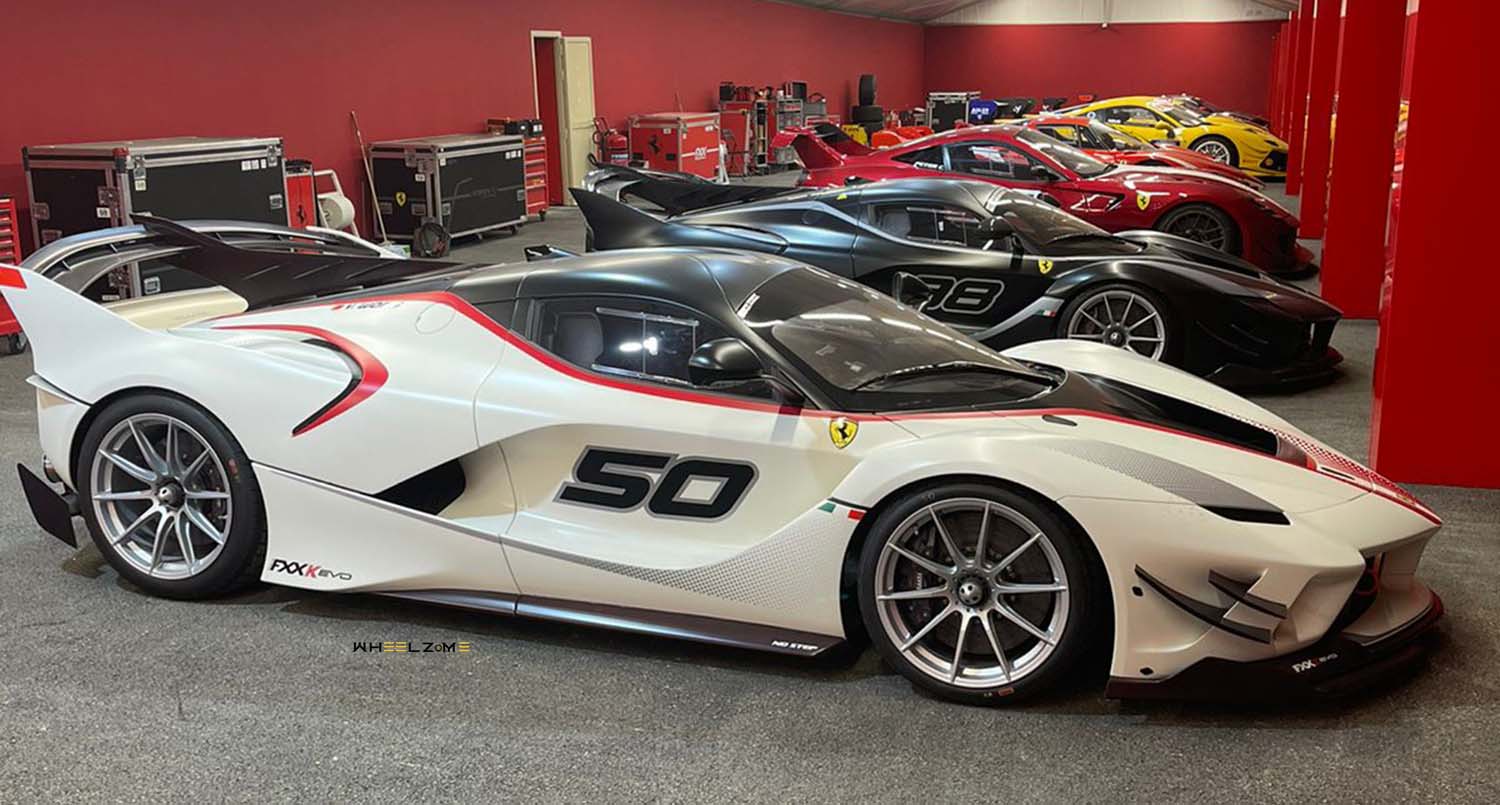 At the development stage, the designers worked on a broad range of different aspects of the Ferrari FXX-K Evo, starting with reducing its overall weight. By drawing on Ferrari’s Formula 1 experience and adopting innovative carbon-fibre component crafting processes, they succeeded in producing a lighter car than the previous FXX-K despite introducing new elements such as the fixed rear wing.

The FXX-K Evo features an evolved aero package developed by Ferrari’s engineers in synergy with the Ferrari Style Centre’s designers, to push to the very limit the performance of a model that already represents the state-of-the-art in terms of Ferrari track-only supercars.

The product of over a year of CFD simulations and wind tunnel testing, the Ferrari FXX-K Evo’s aerodynamics deliver downforce figures very close to those of the cars competing in the GT3 and GTE championships, all to the advantage of lateral acceleration in cornering, stability and, ultimately, exhilarating driving pleasure.

The FXX-K Evo’s downforce coefficient has been improved by 23% on the previous version, which is the equivalent of a 75% increase on the road car from which it is derived. Downforce of 640 kg is generated at 200 km/h, and exceeds 830 kg at the car’s red-line speed.

The Ferrari FXX-K Evo’s downforce level is boosted by a twin-profile fixed wing on the tail. This new addition was developed to work in seamless synergy with the active rear spoiler. In fact, the pressure fields developed by the two downforce-generating systems support and amplify each other. To guarantee both excellent downforce and drag results, the mobile spoiler’s control logics and range of movement were also meticulously reviewed and reprogrammed. 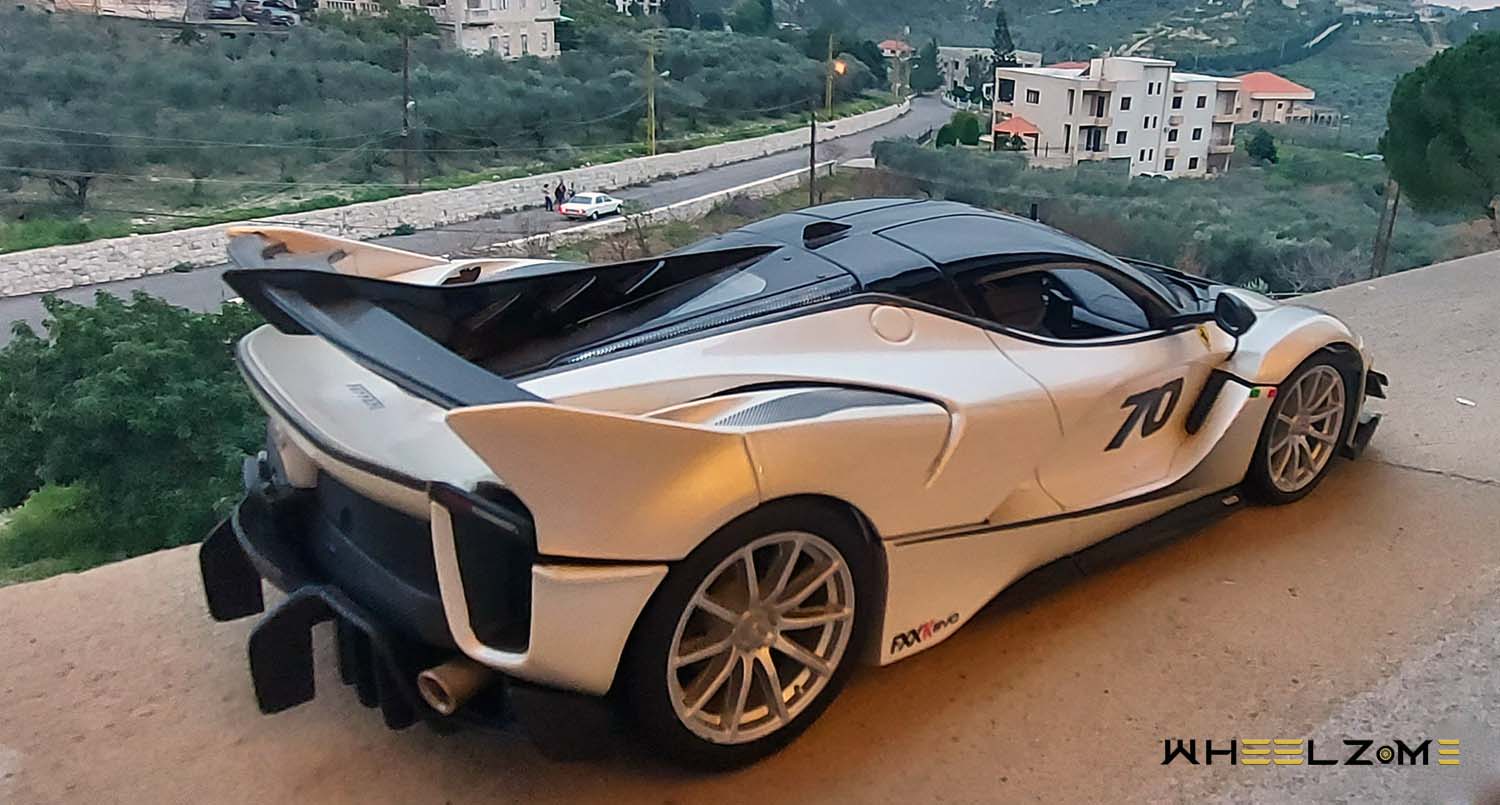 The twin-profile rear wing is supported by two side fins as well as by a central fin. The latter plays a dual role: firstly it acts as a vertical fin, boosting stability at low yaw angles, and secondly, it supports the action of the three delta (triangular) vortex generators.

The vortex generators, on the one hand, clean the flow field striking the wing of the effects of the wake of the hot air flow from the radiators which vents onto the bonnet. On the other, they create a downwash component in the flow which boosts the twin-profile’s downforce capacity. The result is a 10% increase in the downforce developed by the rear system.

The design of the rear bumpers was also modified in the light of the new flow structures. The by-pass vent from the rear wheel arch has been enlarged, hollowing out the volume behind the wheels to ensure the wake from the wheels is efficiently channelled. The result is that the flow to the rear diffuser is protected and losses are reduced so that downforce has been boosted by 5%.

The significant increase in rear downforce demanded in-depth review of the design of the front bumpers and underbody to guarantee a balanced development of the downforce.

The geometry of the sides of the front bumper was altered by hollowing out the surfaces beneath the headlights. This made space for a couple of flicks divided by a vertical turning vane and an additional intake ahead of the front wheels. This system guarantees efficient downforce generation (10% of the increase in downforce gained on the FXX-K). It also makes good use of know-how acquired in the GT programmes in which rules introduced in 2016 permitted extensive study of the interaction between horizontal (flicks) and vertical (dive plane) flow management systems, optimising their efficiency.

Ground effect was also boosted by the introduction of vortex generators on the undertray. This capitalised on the accelerations created by the rear system and the front underbody, generating 30% of the extra downforce the car delivers compared to the FXX-K.

The Ferrari FXX-K Evo’s boosted performance also demanded new front brake air intakes which, although no wider to avoid increasing drag, are more efficient thanks to a complete redesign of the intake itself.

Furthermore, the suspension was specifically calibrated to adapt it to the car’s new aerodynamic efficiency figures.

The clearly racing-inspired cabin is characterised by a conceptually-different steering wheel brilliantly suited to hugely powerful performance levels achievable in the Ferrari FXX-K Evo. Formula 1-derived with integrated gear-shifting paddles, the new steering wheel now also sports the KERS Manettino to improve both control of that system and overall ergonomics.

The rear video camera screen to the right of the driver has been replaced with a larger 6.5″ version.

It also now displays data from a new telemetry system with clearer, more direct performance parameter and car status readouts. The driver can check the KERS status and the times being clocked by selecting from the various screen options available.

After undergoing around 5,000 km of development runs and 15,000 km of reliability test-drives, the Ferrari FXX-K EVO will be a very active protagonist in the XX Programme in the 2018/2019 season which spans nine track outings in all between the start of March and the end of October. As is now traditional, the XX cars will also be taking part in the prestigious Finali Mondiali weekend which marks the end of each racing season. 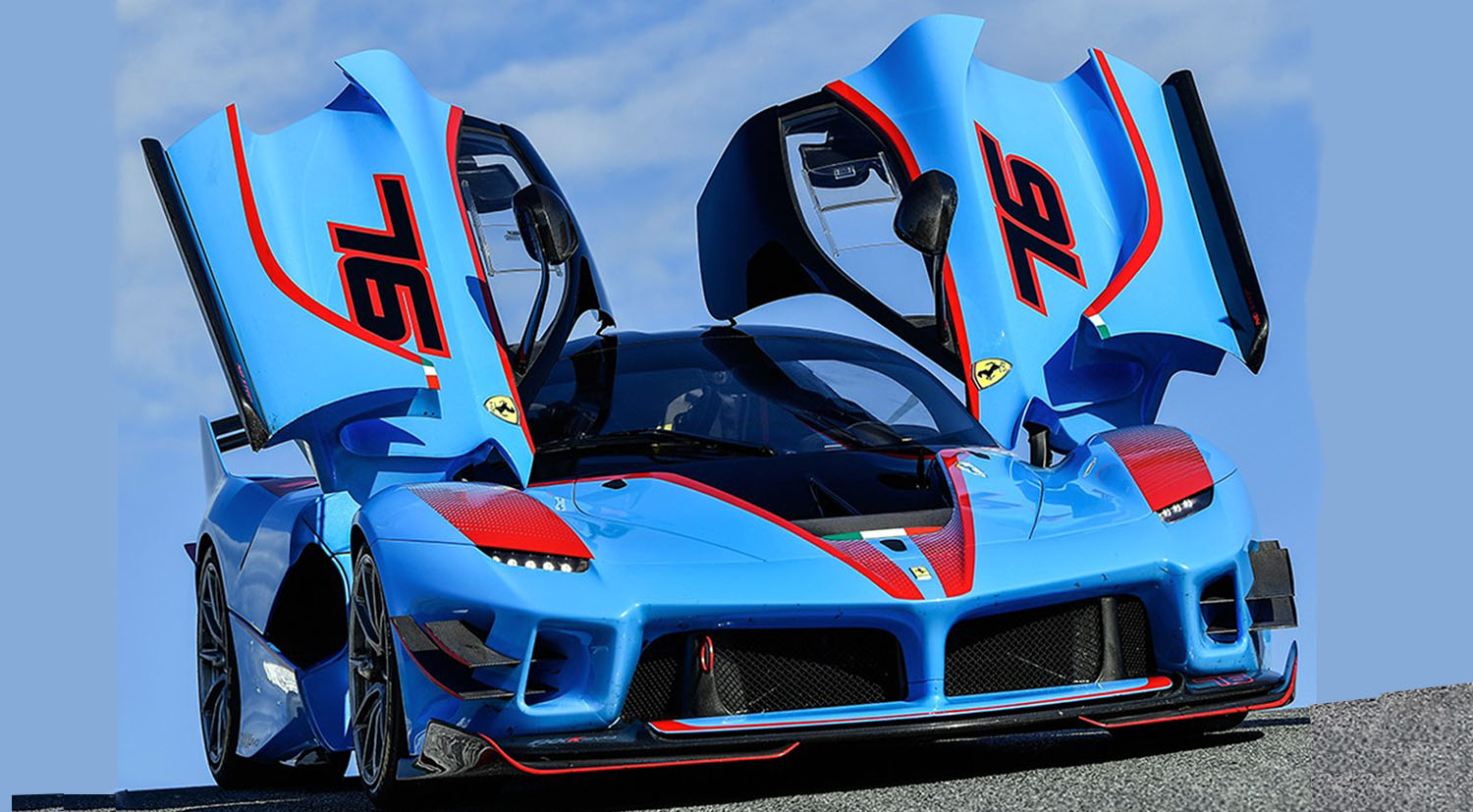 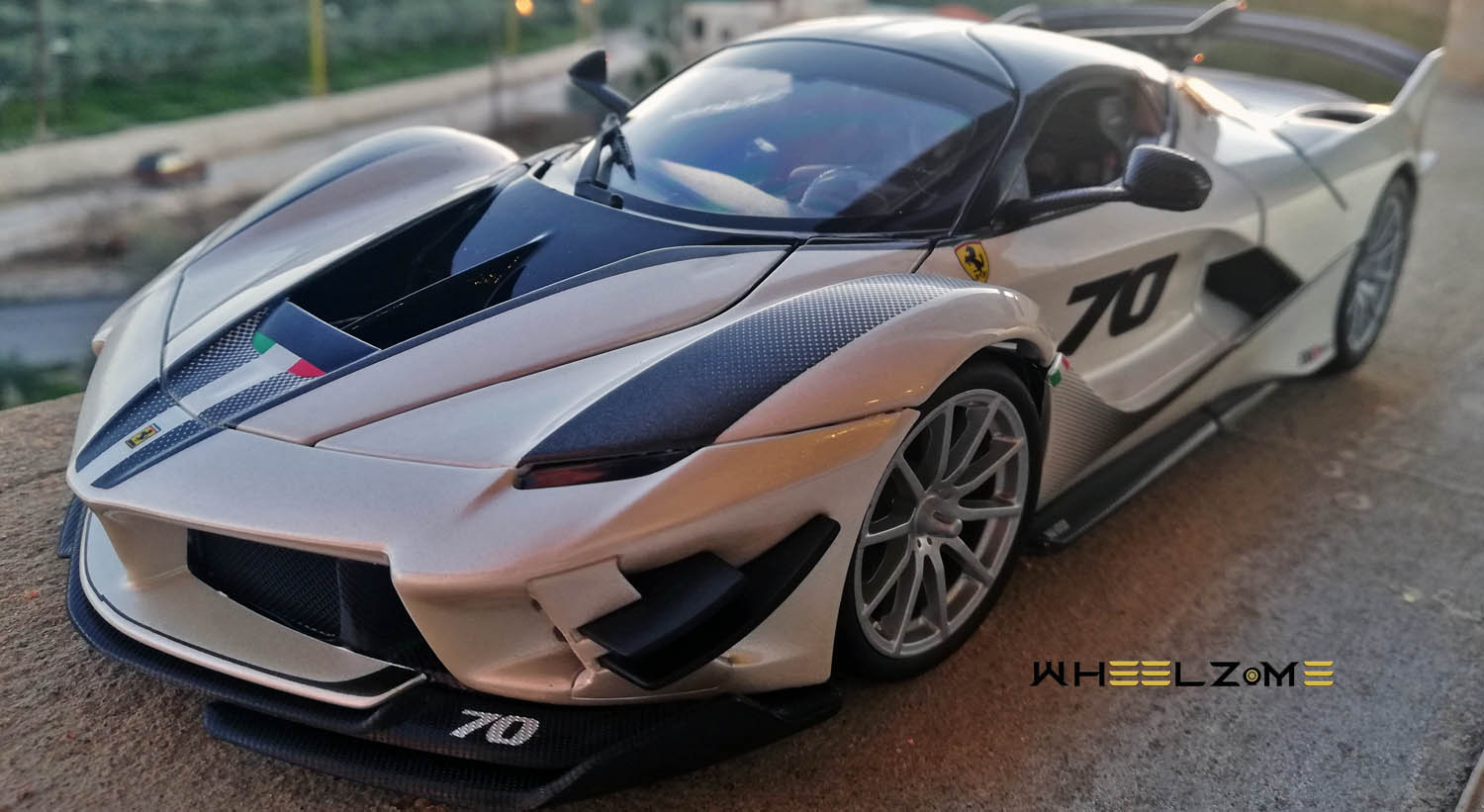 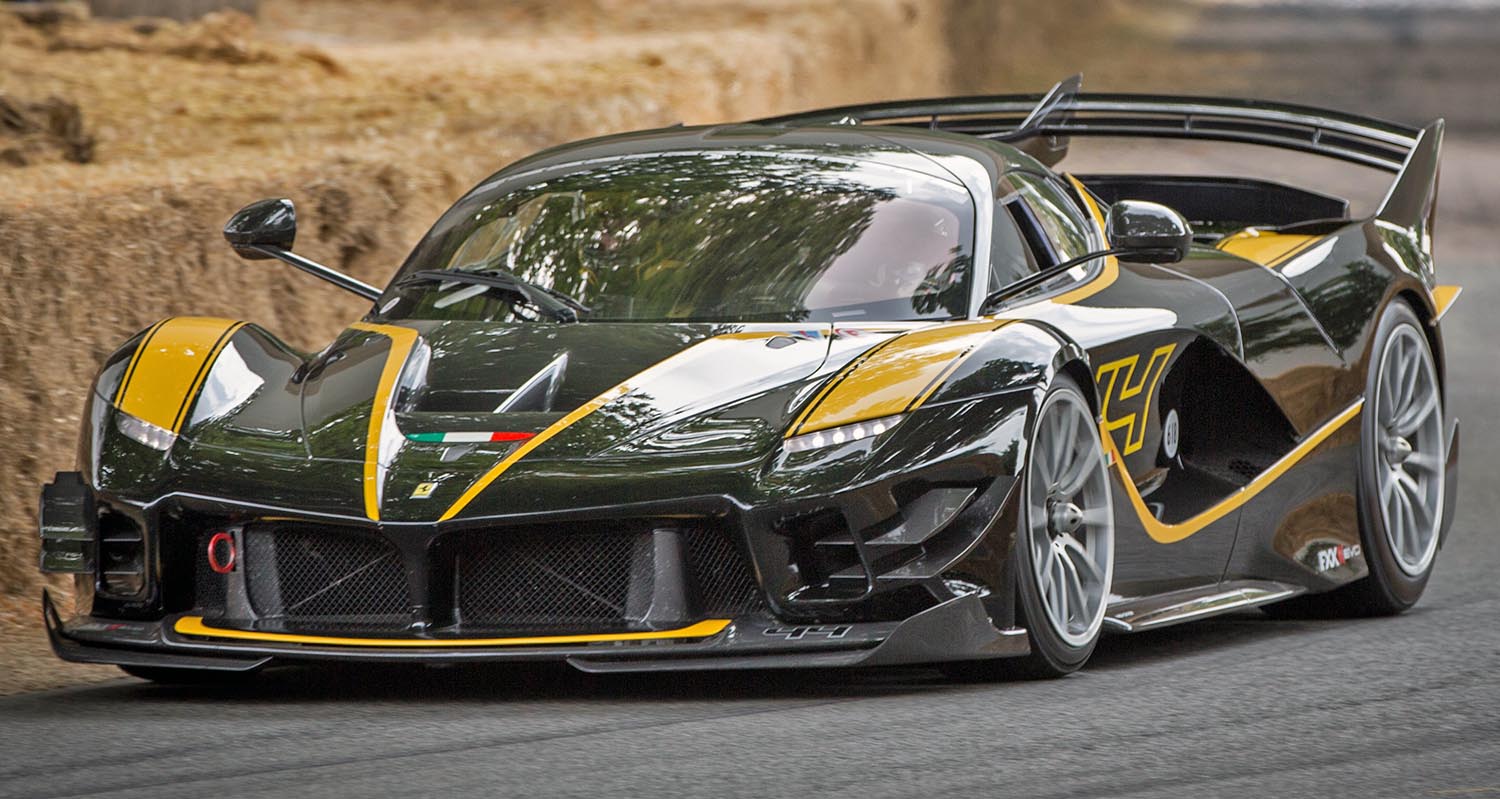 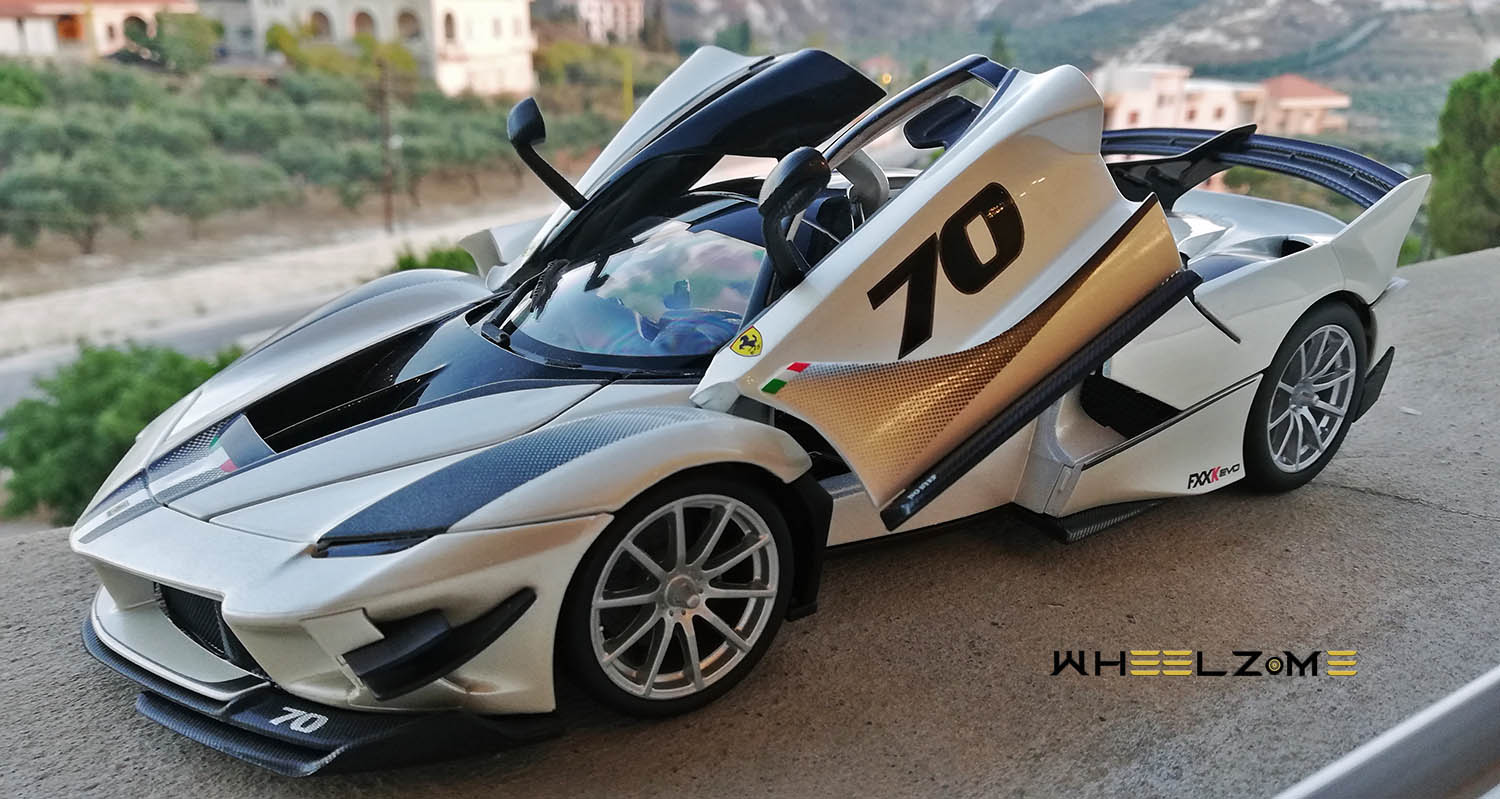 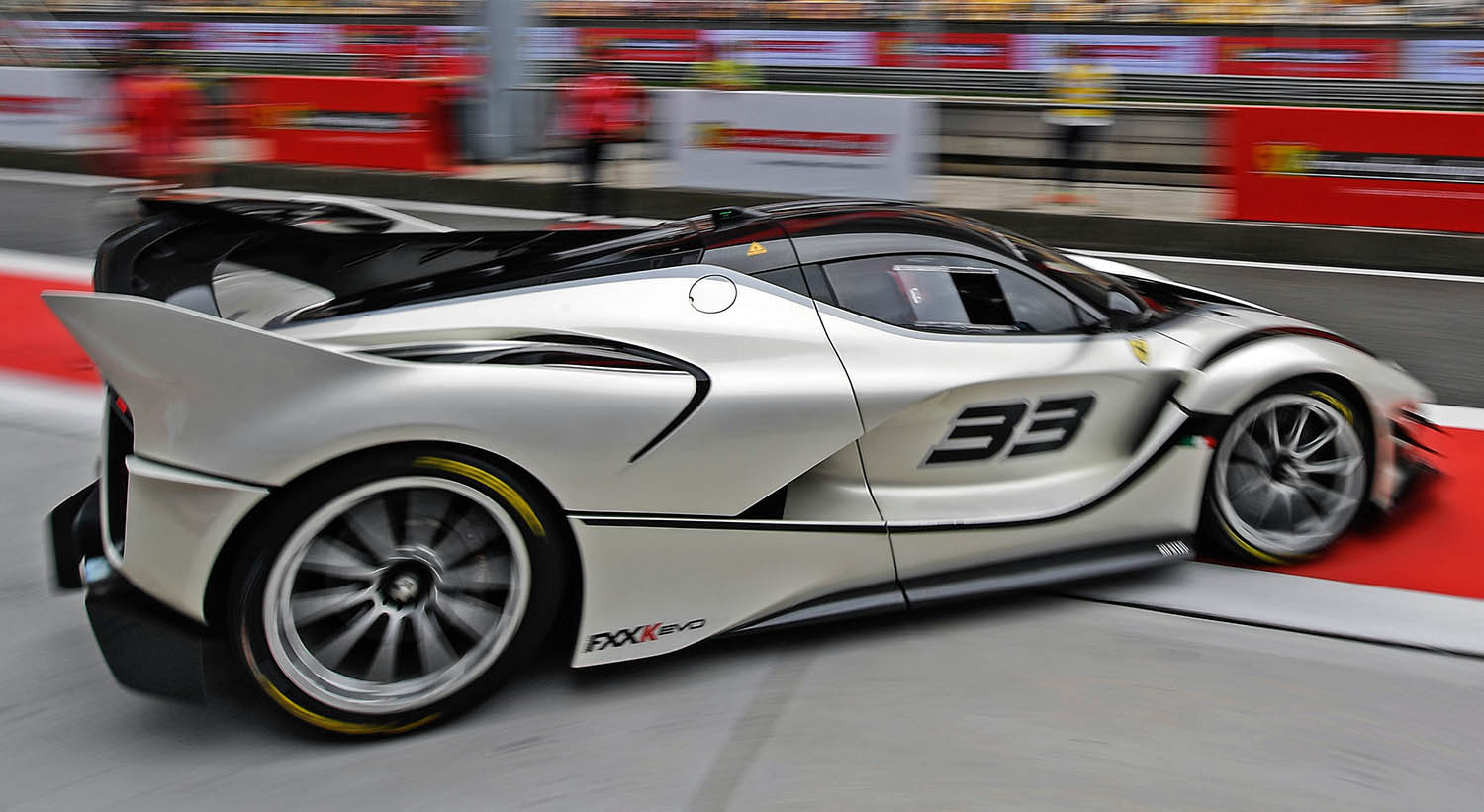 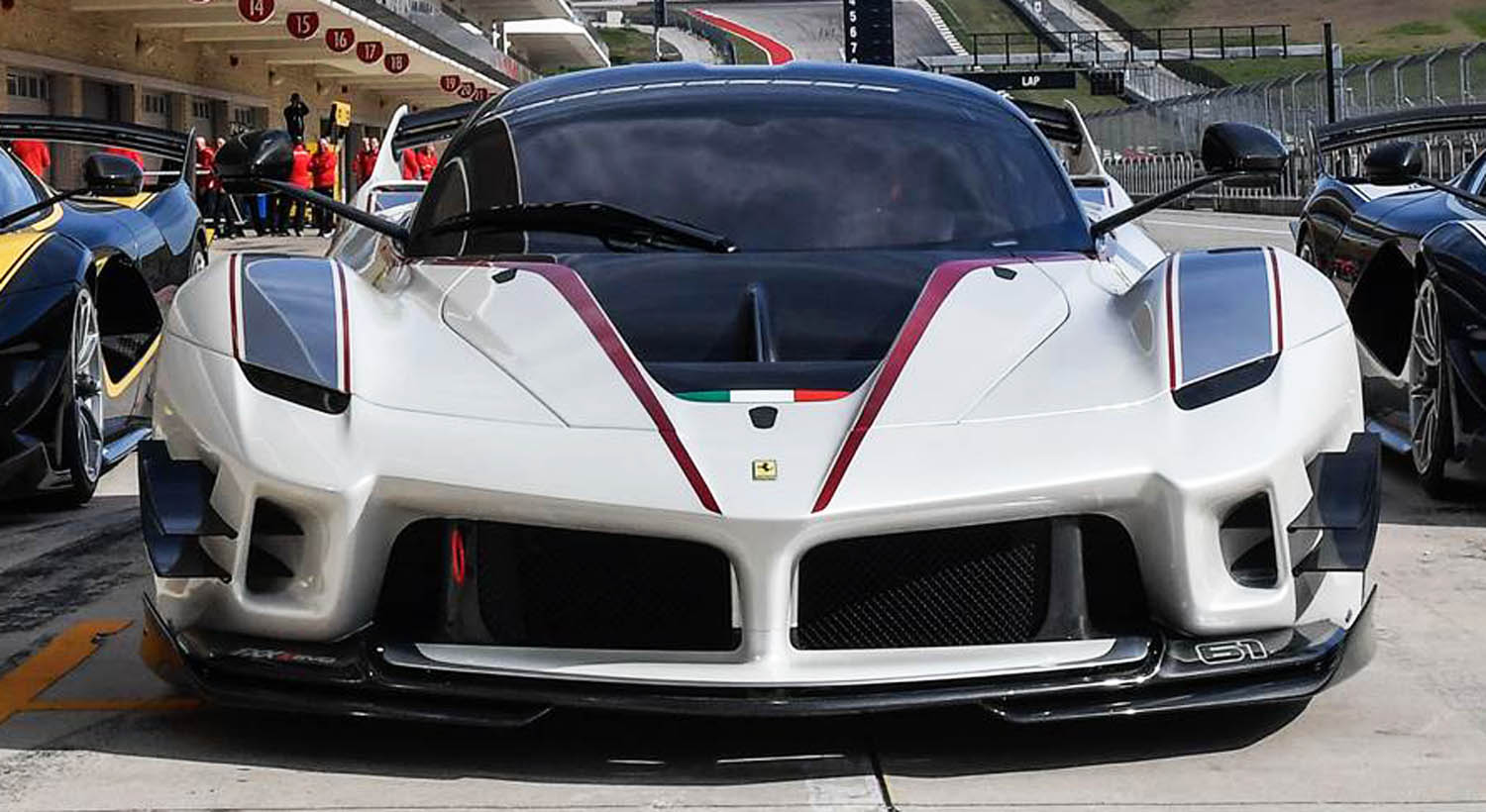 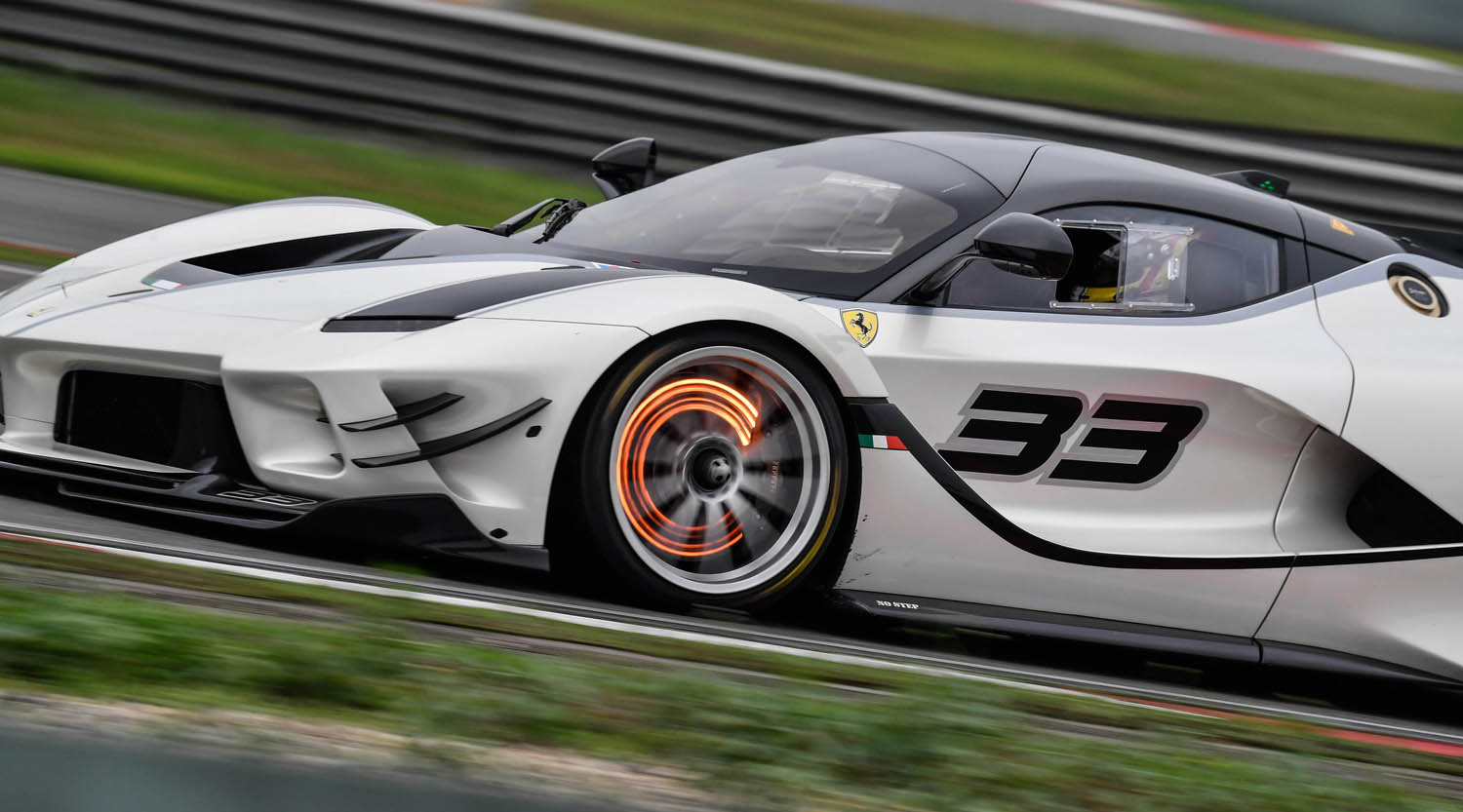 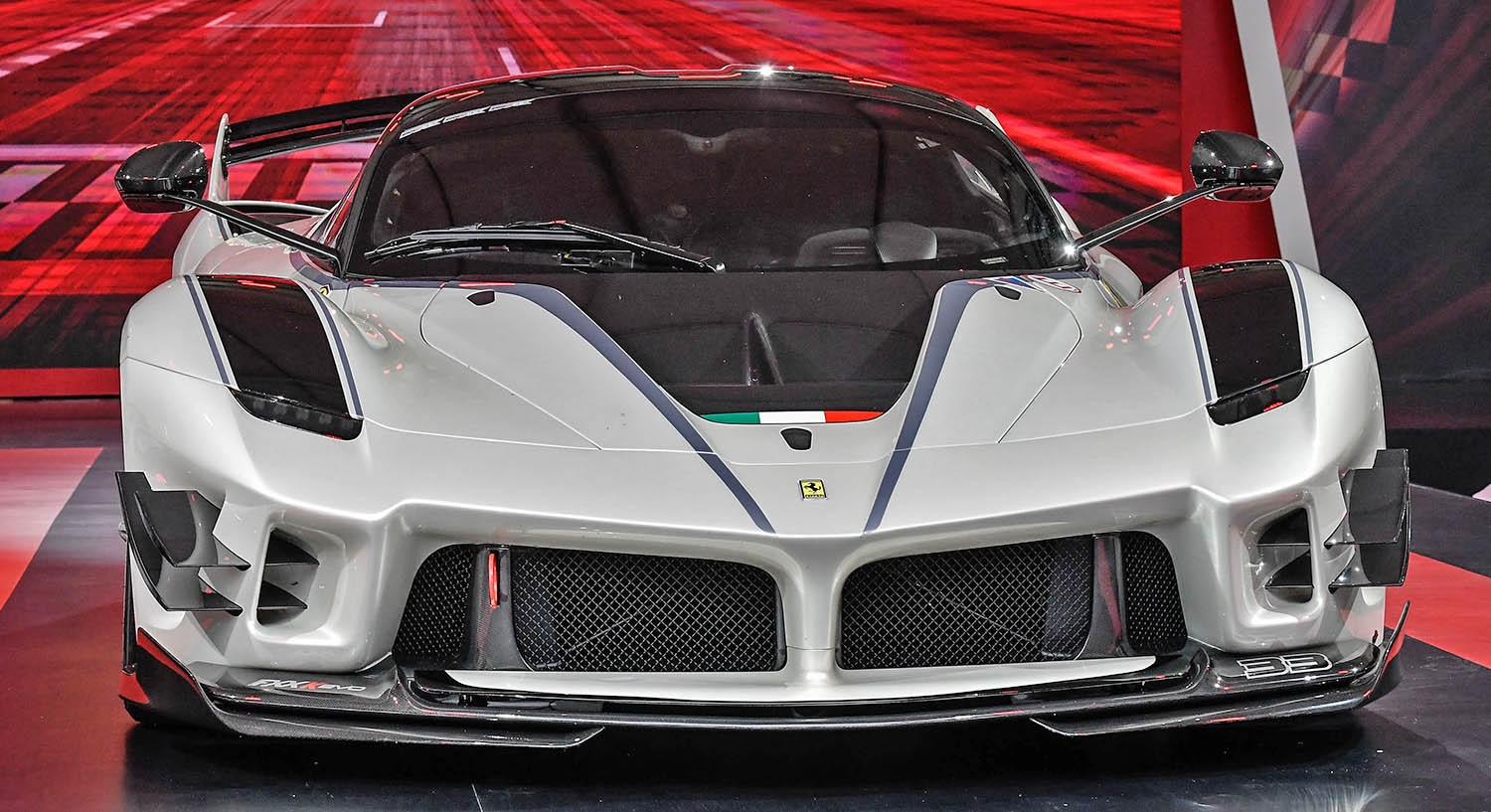 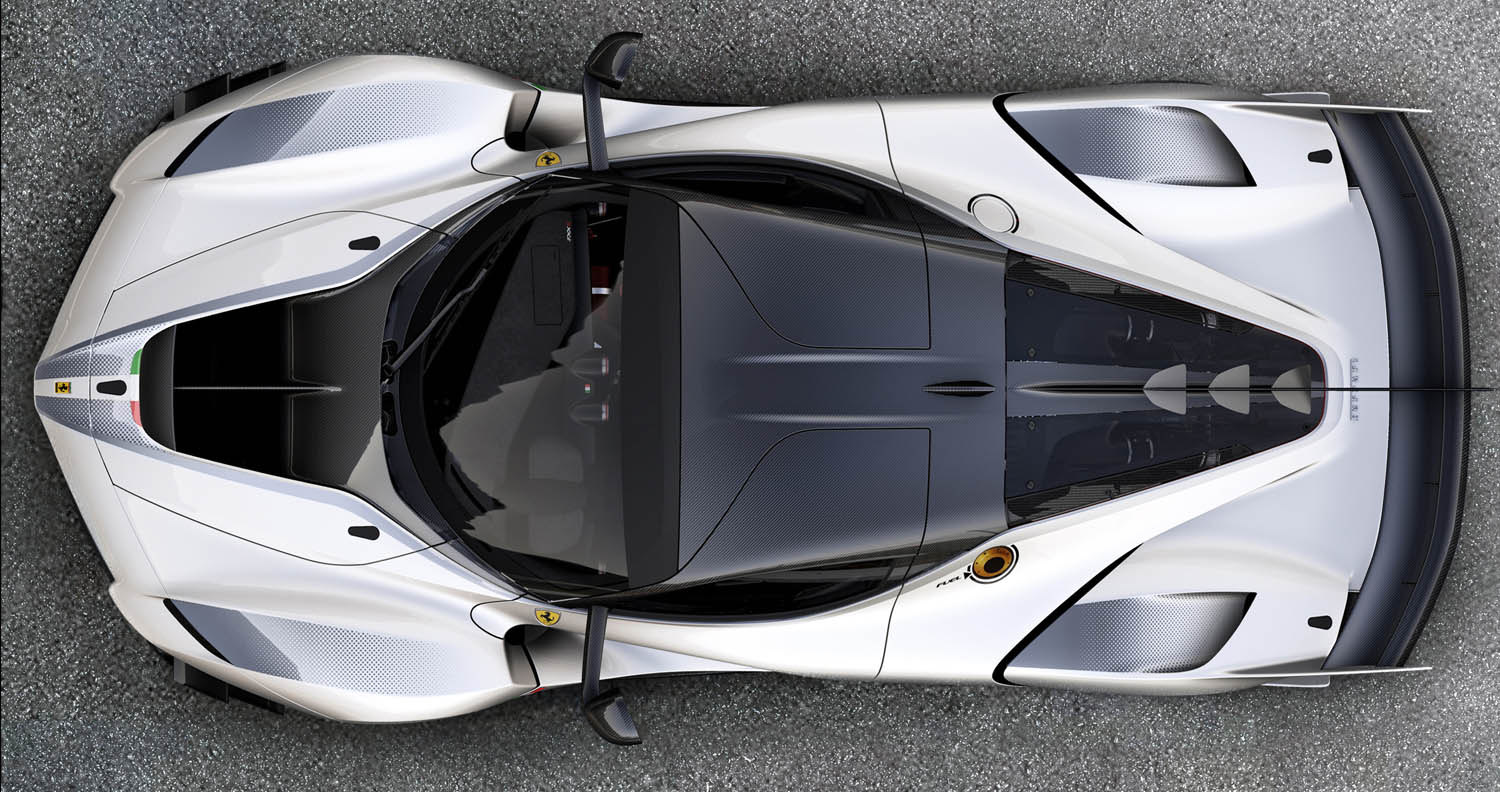 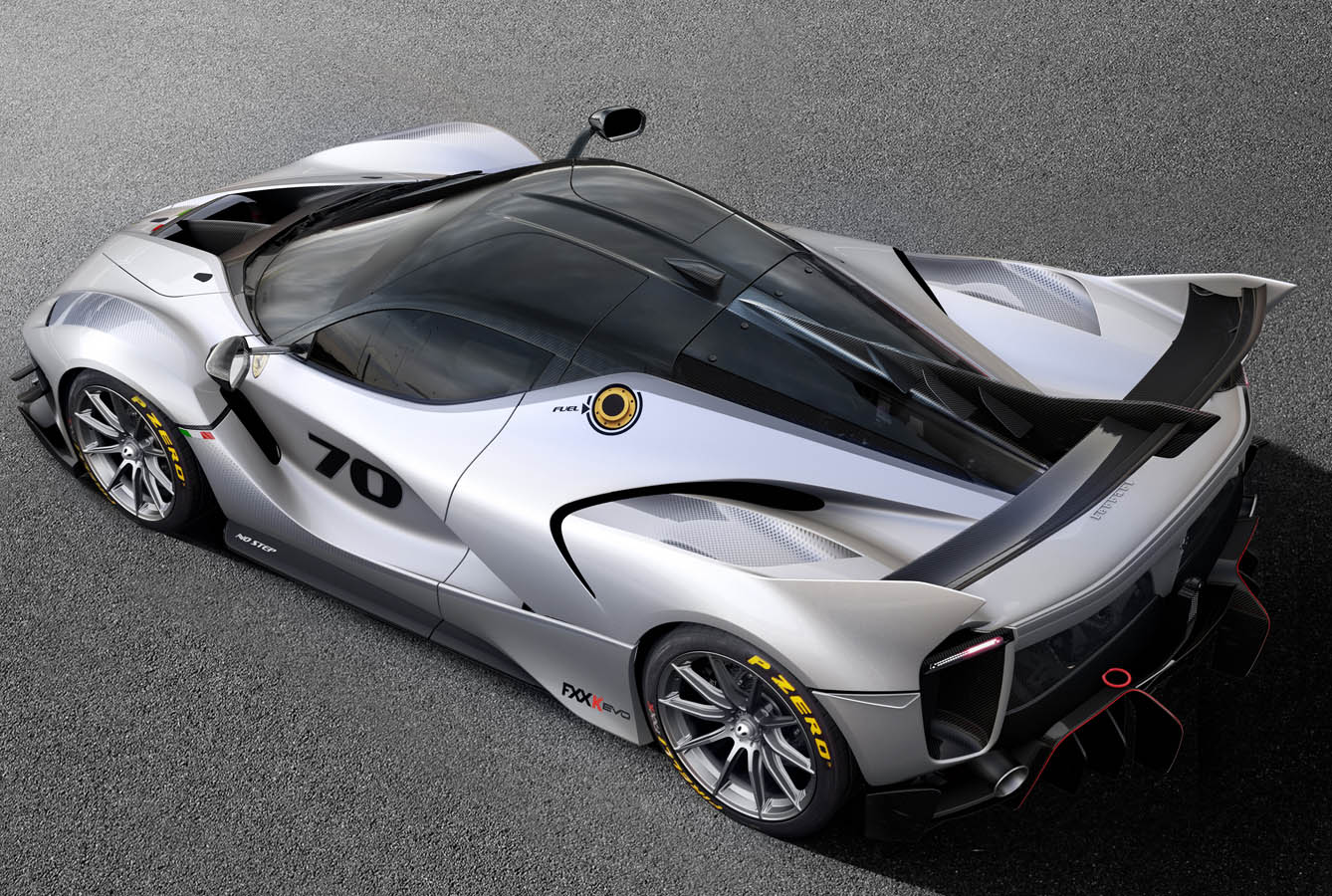 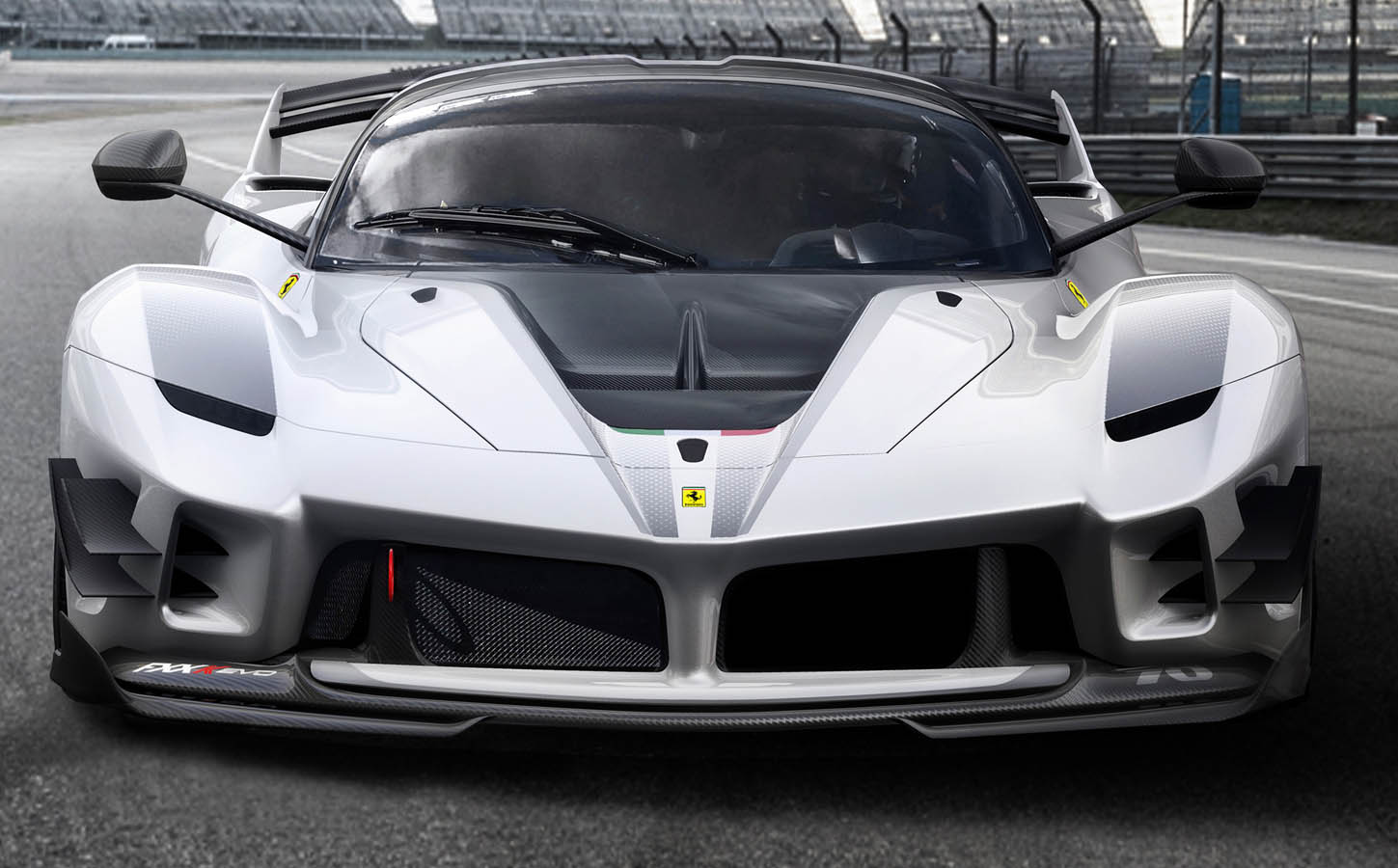 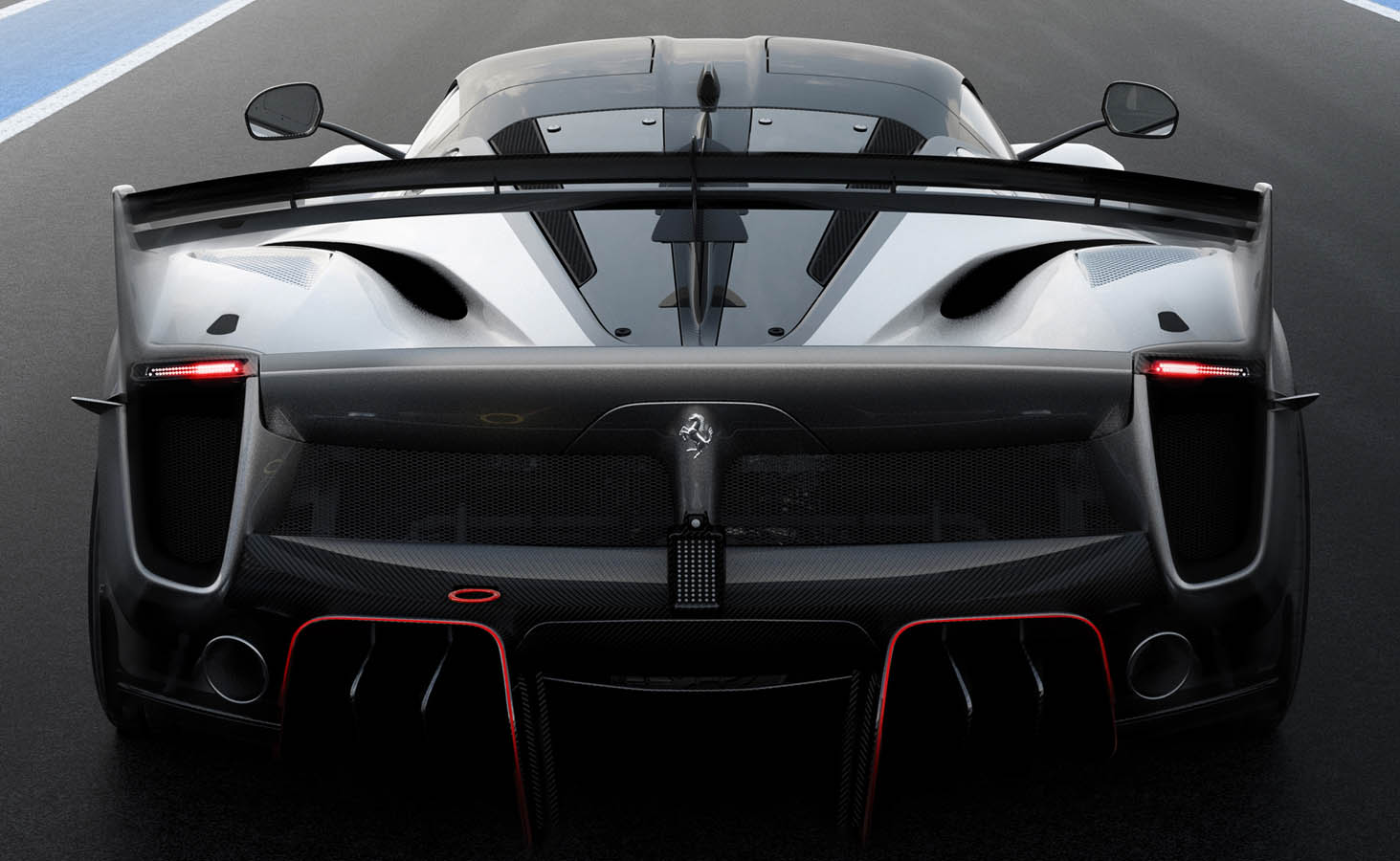 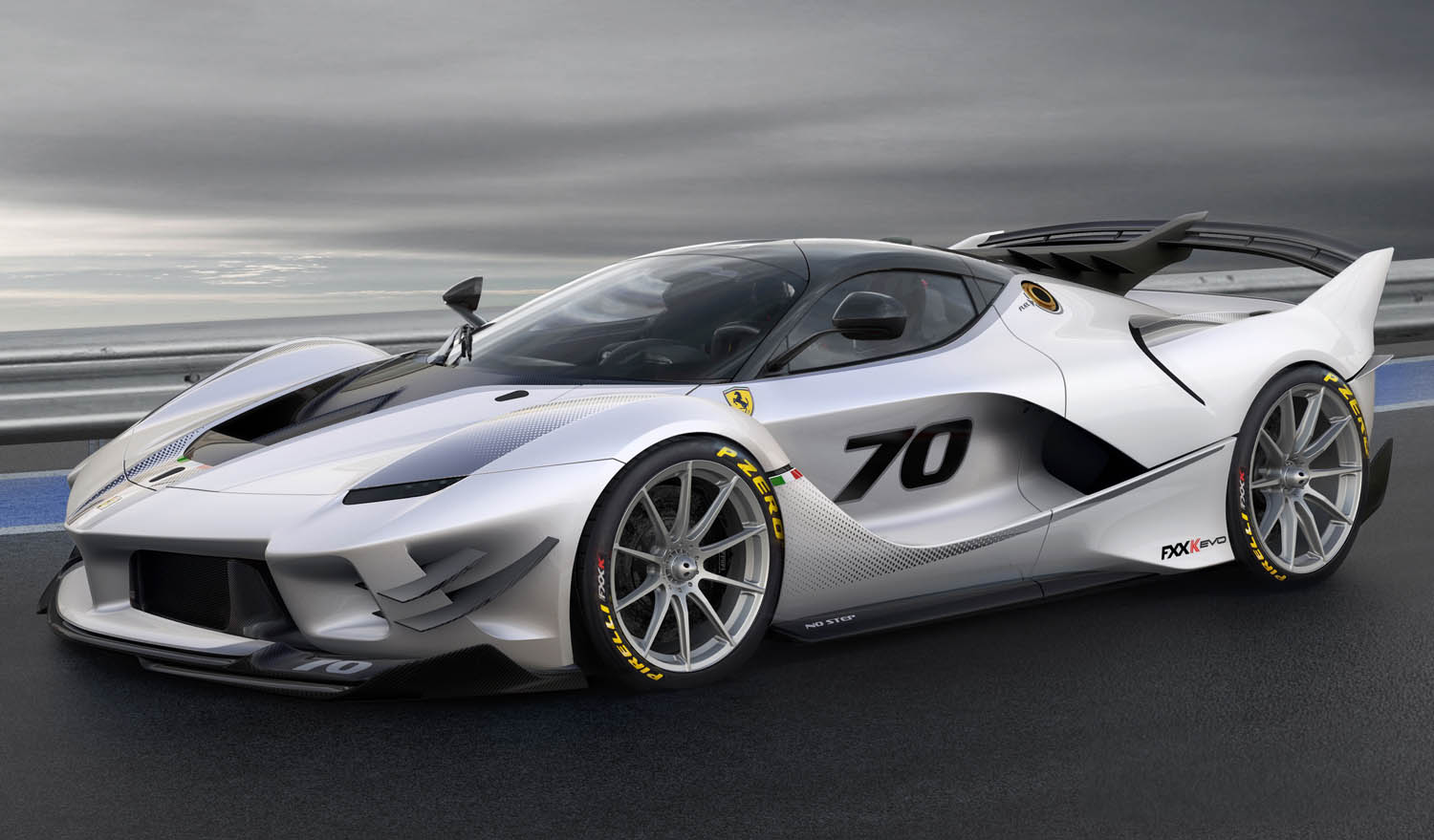 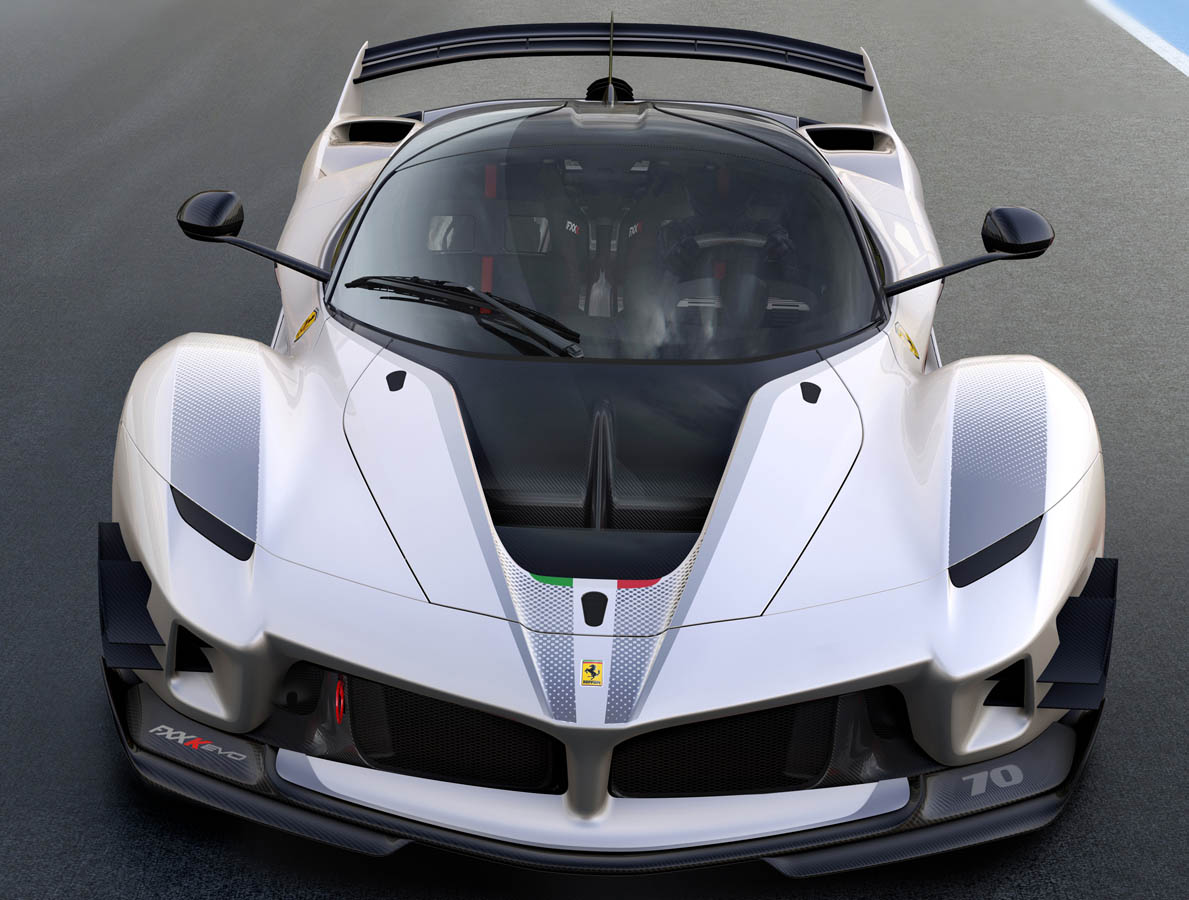 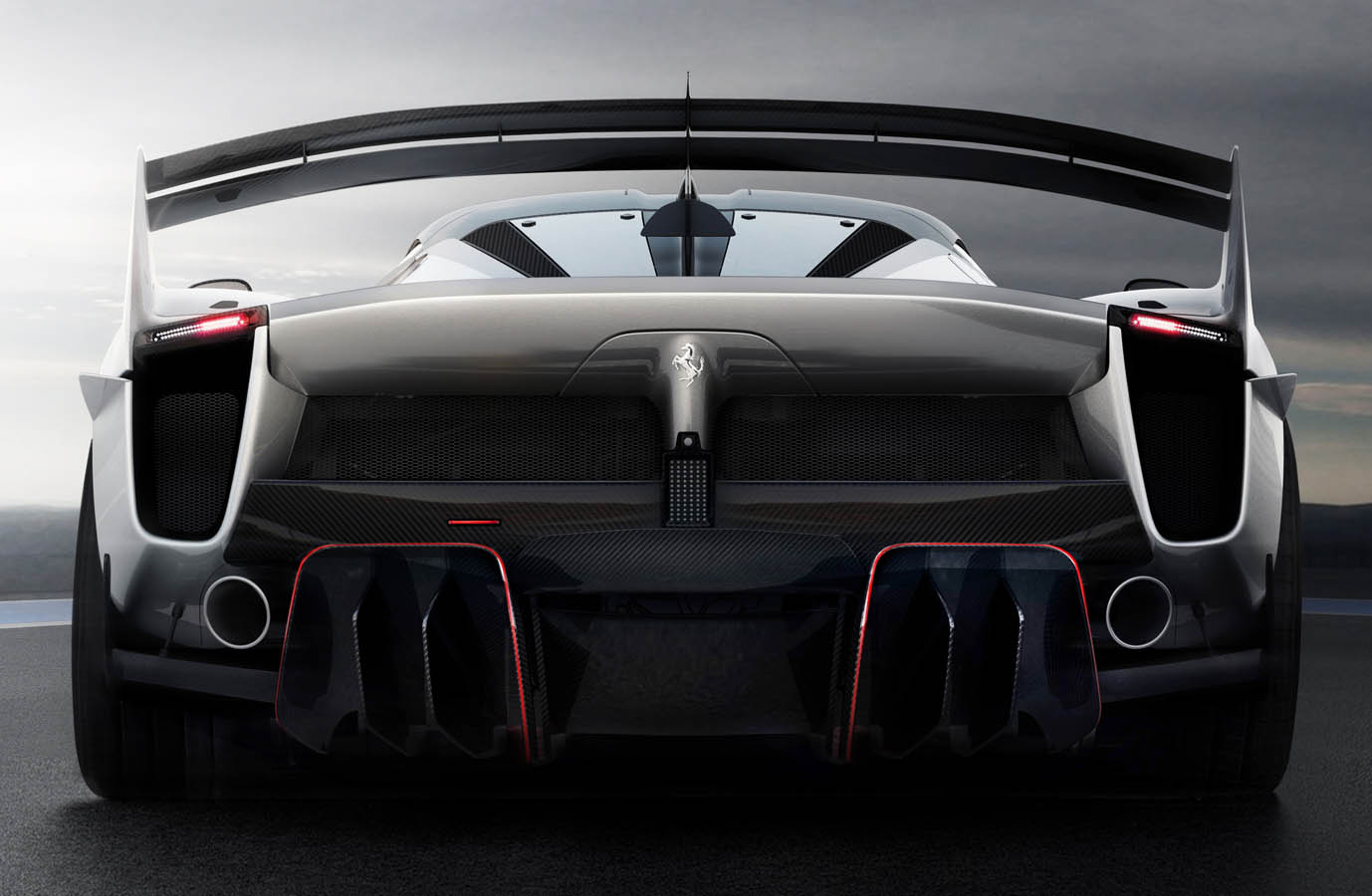 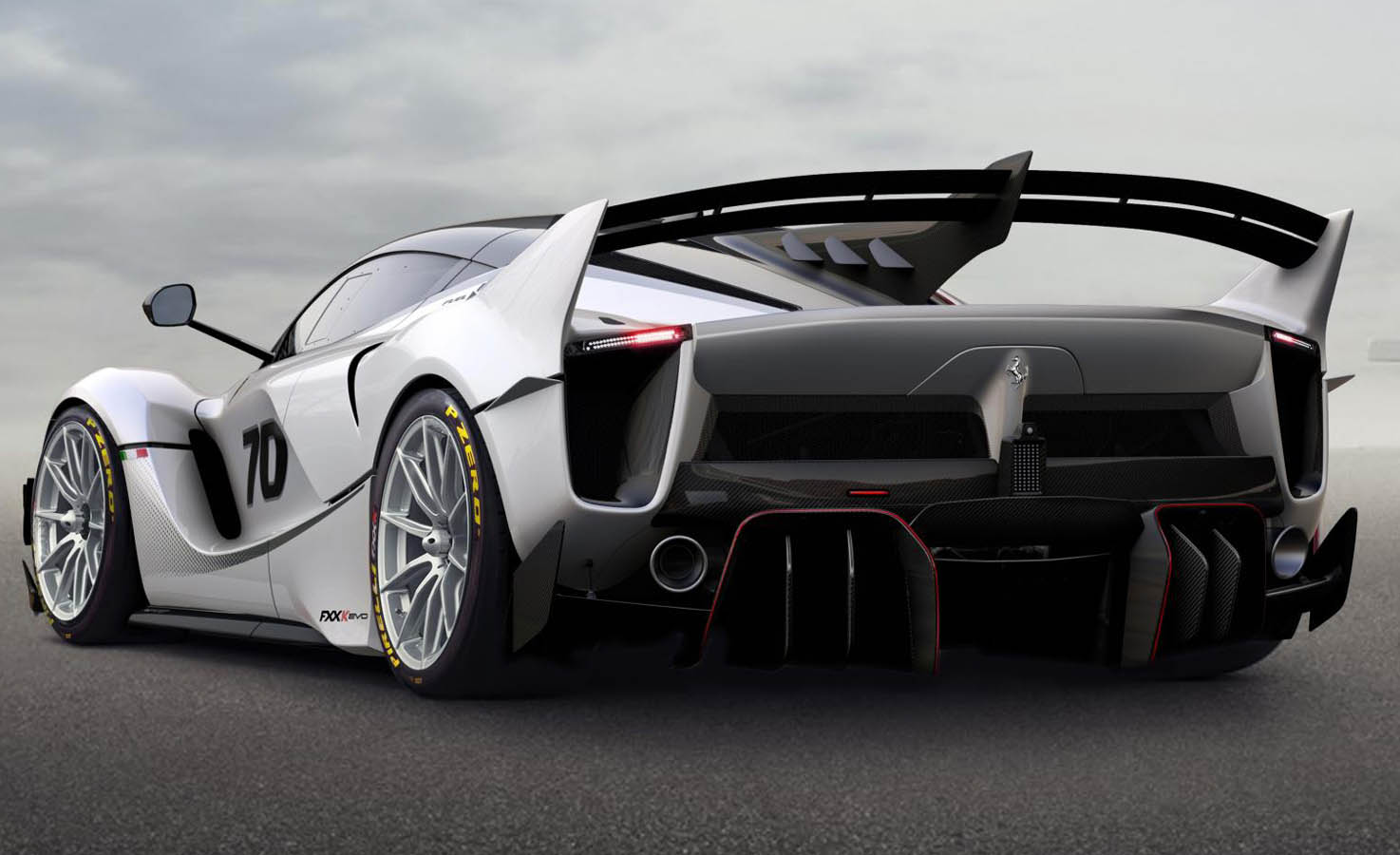 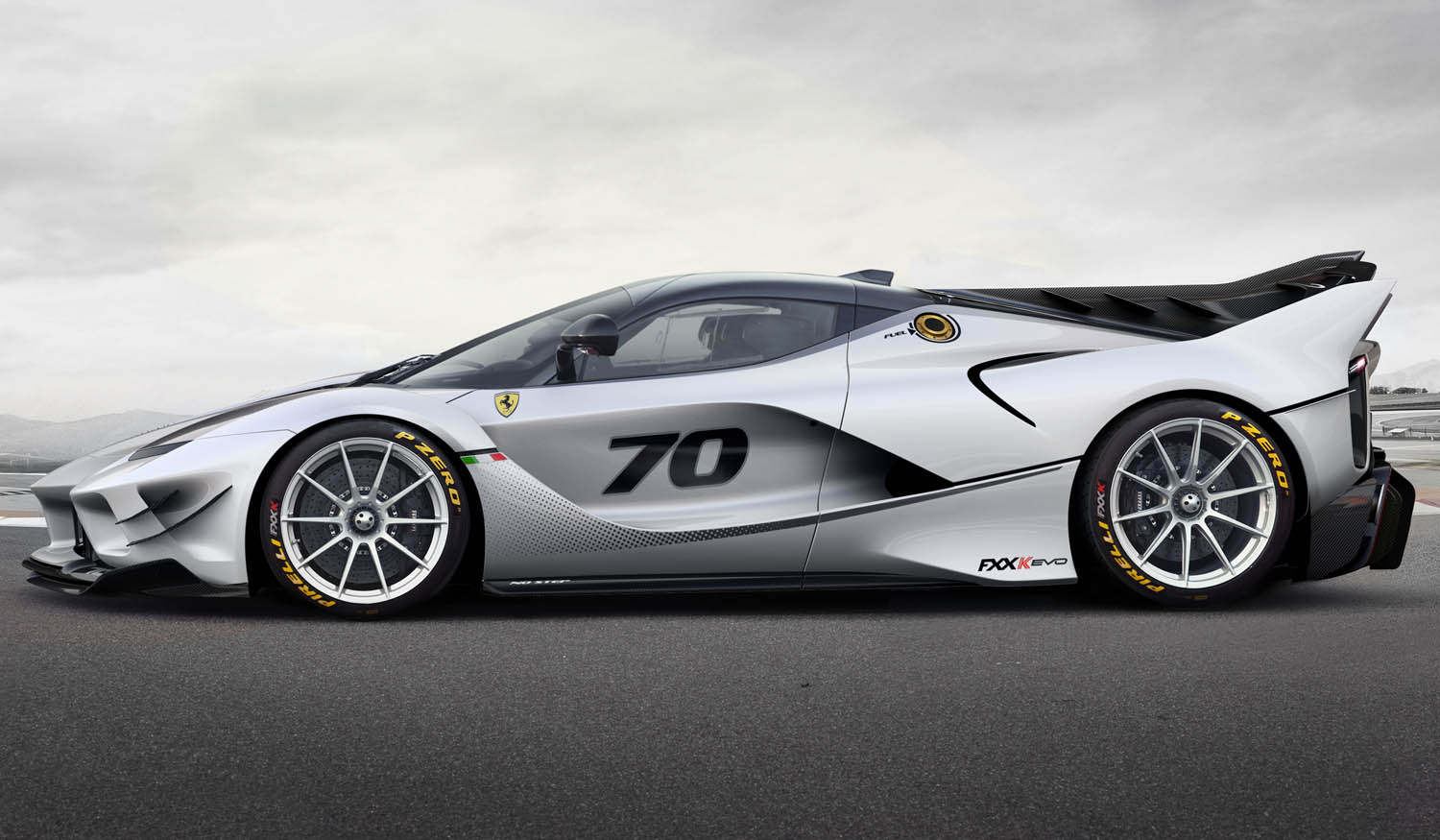 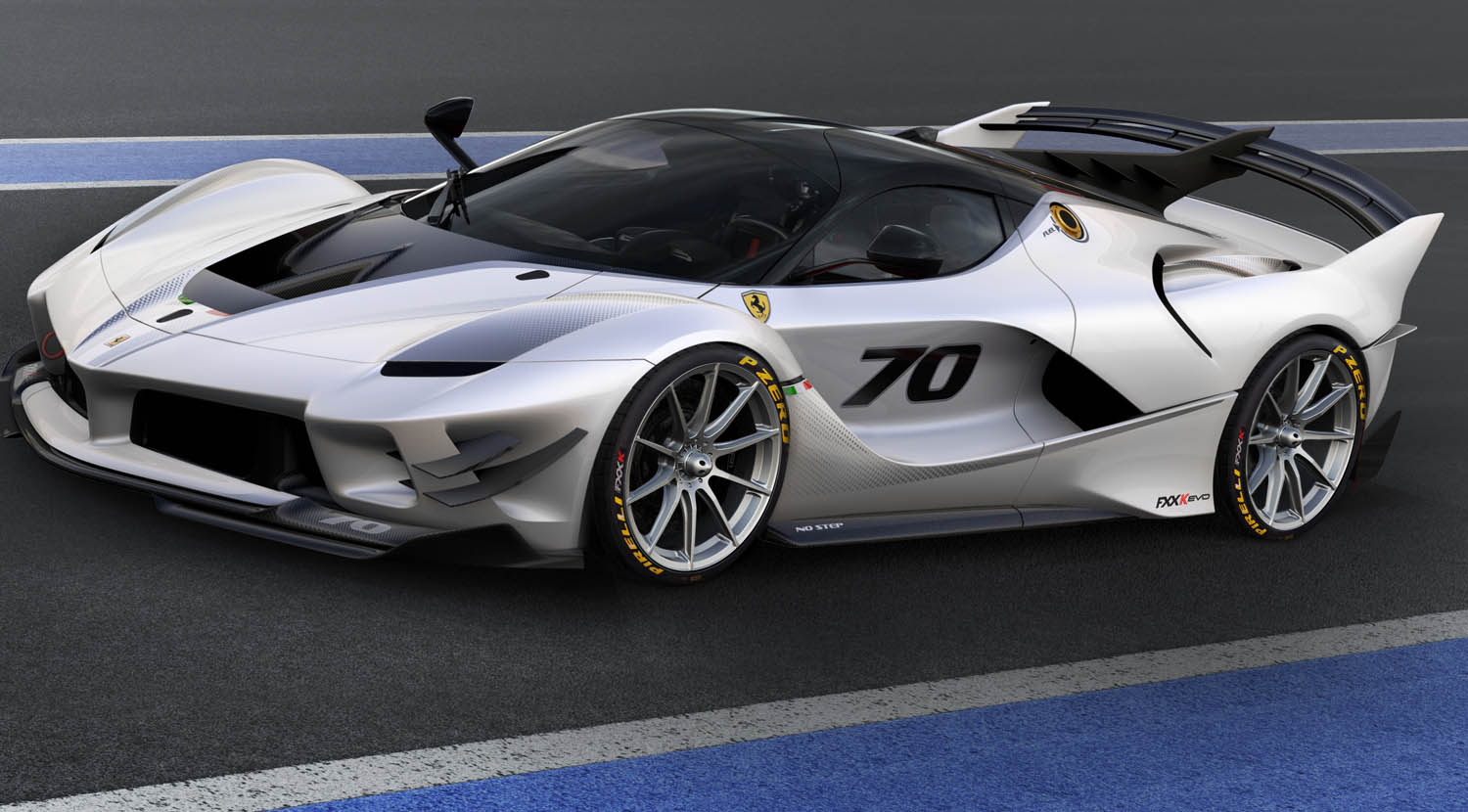 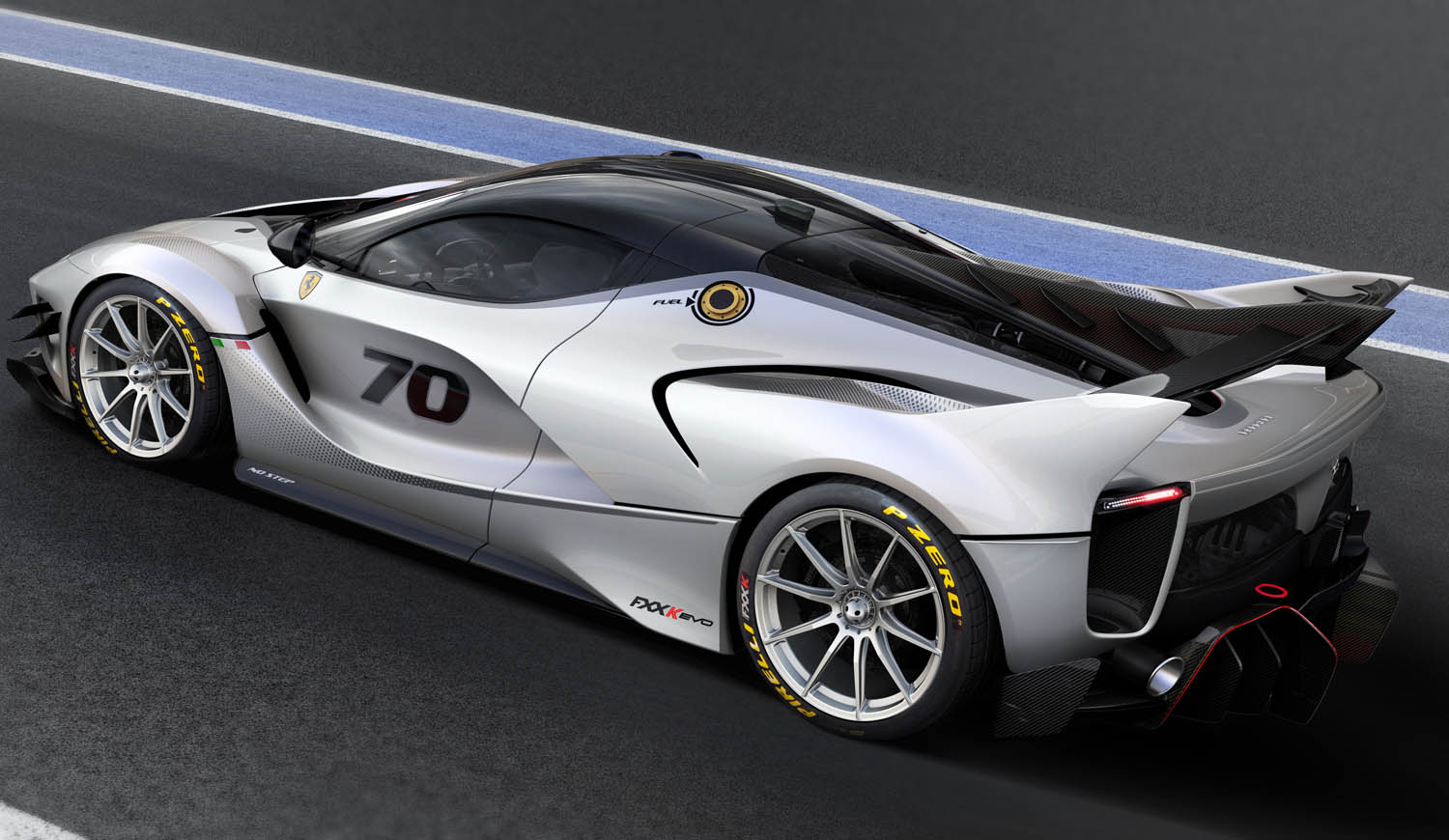 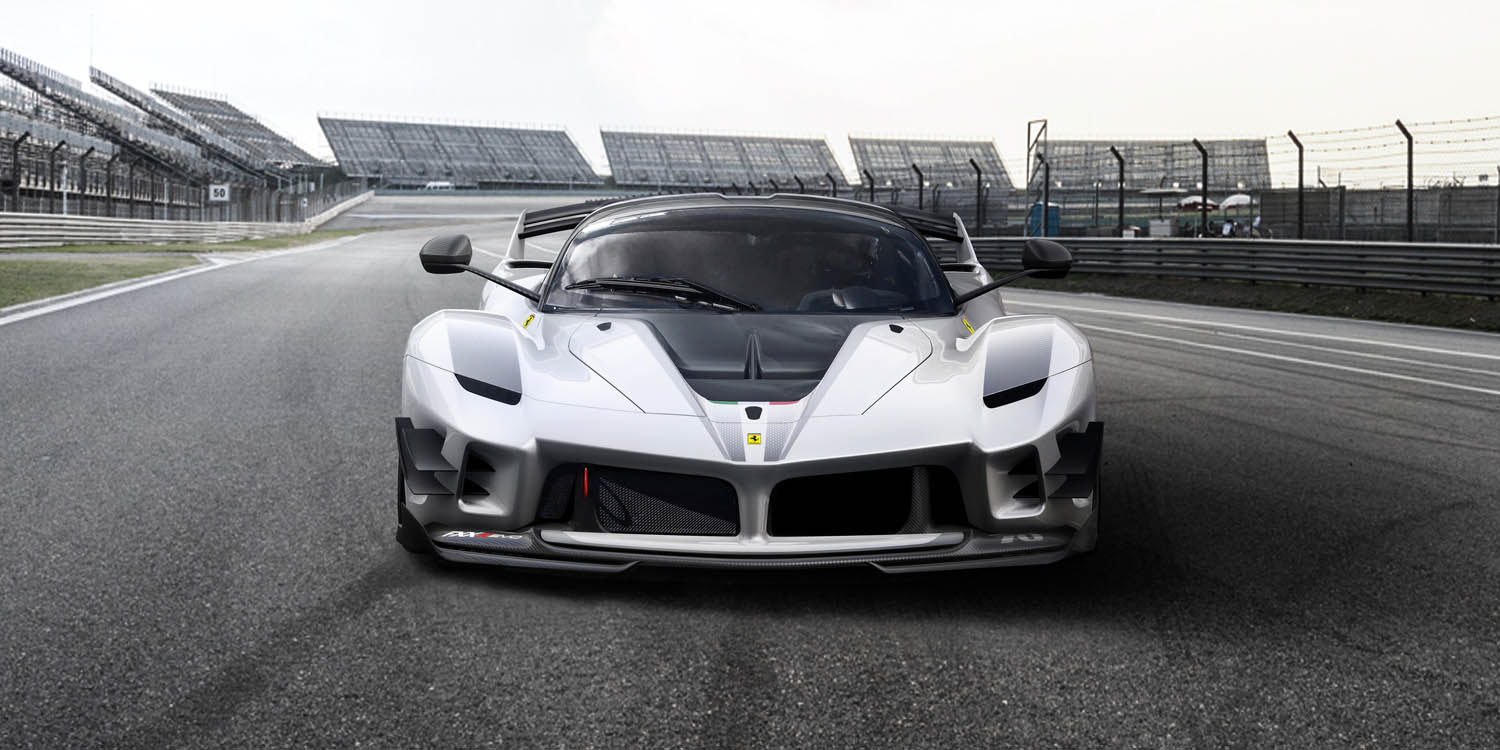