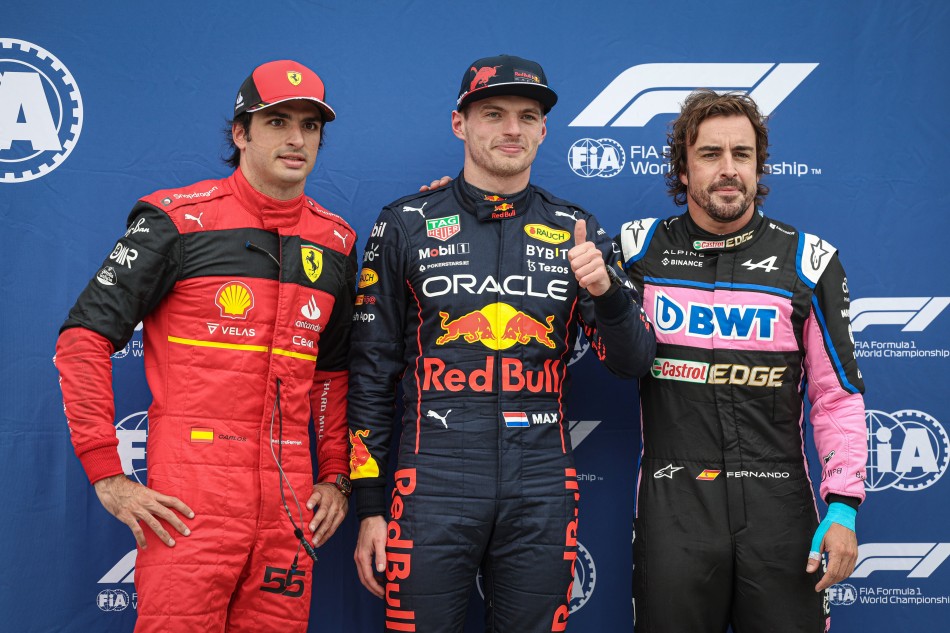 At the start of Q1 a stream of cars took to the track on extreme wet tyres in order to assess the conditions and to get in a banker lap in case of incident and red flags on the wet track.

Verstappen quickly made his way to the top of the order with his second flyer, a lap of 1:35.830. After six minutes he was edged out of P1 by Sainz and then by George Russell, with the Mercedes driver taking top spot thanks to a lap of 1:34.989. Russell then improved to 1:33.200 to continue in top spot, but Verstappen, after having a lap deleted for going over track limits in Turn 2, put in a good lap to vault back to P1 with a lap of 1:33.200.

The track was improving quickly, however, and Verstappen’s best to that point was soon passed by Alonso and again by Sainz, who moved back to the top of the timesheet with a lap of 1:32.781.

With four minutes left on the clock, Checo dropped to P15 as he struggled to get temperature into his tyres. He managed to improve to P12 with a lap of 1:33.929 and when the final lap times came in the Red Bull driver squeezed through to Q2 in 13th place.

At the top of the order, Verstappen found time to get in another lap and his final 1:32.219 was good enough for top spot ahead of Alonso, Sainz and Haas’ Kevin Magnussen.

However, eliminated at the end of an unpredictable opening segment were 16th-placed AlphaTauri driver Pierre Gasly, followed by Aston Martin’s Sebastian Vettel and Lance Stroll, Williams’ Nicholas Latifi and the second AlphaTauri of Yuki Tsunoda.

At the start of Q2, Verstappen took to the track on full wets, but team-mate Pérez opted for intermediate rubber. And while the Dutchman’s opening 1:31.457 handed him P2 behind early pacesetter Alonso, Pérez’s session ended in the barriers. The Mexican lost control in for Turn 3 and he slid off track and into the TecPro. The session was quickly red-flagged.

After a 12-minute delay running resumed with nine minutes left on the clock and Verstappen, on inters, headed back out on track. The Red Bull driver jumped straight to the top of the timesheet with a lap of 1:27.764, 1.3 seconds clear of Sainz. The Dutch driver then found more time, working his way to 1:25.201 as Russell slotted into second half a second behind the Red Bull.

Verstappen timed his final lap perfectly and he jumped P1 with a time of 1:23.746, a full second ahead of Alonso. Russell finished the middle segment in third place ahead of Sainz, Mercedes’ Lewis Hamilton and the lead Haas of sixth-placed Mick Schumacher. Zhou Guanyu made it through to Q3 in P7 ahead of Alpine’s Esteban Ocon, the second Haas of Kevin Magnussen and the final spot in the top-10 shootout was claimed by McLaren’s Daniel Ricciardo.

Ruled out at the end of Q2, though, were Alfa Romeo’s Valtteri Bottas, Williams’ Alex Albon, Checo in P13, and McLaren’s Lando Norris and Leclerc, both of whom failed to set a time.

In the first runs of Q3, on a drying track, Verstappen opened with a lap of 1:22.701. Sainz slotted into second with his second flyer of 1:22.932 and Alonso took third, a little over a tenth behind his fellow Spaniard.

Versdtappen pitted for a new set of inters and when he rejoined he found more pace to set a lap of 1:21.620. Russell gambled on slicks but the Briton lost grip in Turn 2 and slid backwards into the barriers. He was able to keep going but he dropped down the order. Verstappen was finding even more time, however, and on his final lap he powered to an impressive final time of 1:21.299. Sainz tried to match the Red Bull driver’s pace but he got on the power too early on the exit from the final chicane and he momentarily lost the back end of his Ferrari.

That left him with a final time of 1:22.096 and that opened the door for Alonso to barge through to the front row for the first time since he took pole for the 2012 German Grand Prix.

Verstappen claimed his second pole position of the year 0.645s ahead of Alonso and almost eight tenths clear of Sainz. Fourth place went to Hamilton, with Magnussen in fifth place ahead of Haas team-mate Mick Schumacher. Ocon took seventh in the second Alpine, with Russell eighth ahead of Ricciard and Guanyu.