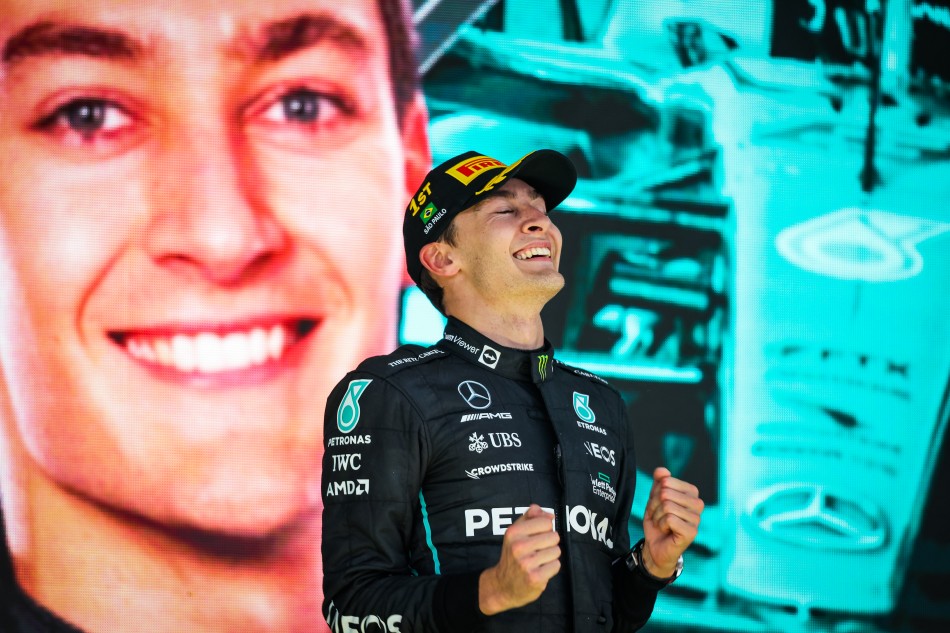 At lights out, polesitter Russell led the field into Turn 1 with Hamilton ahead of Verstappen and Red Bull team-mate Sergio Pérez. Further back, as the field went through Turn 8, McLaren’s Daniel Ricciardo clipped the rear of Kevin Magnussen’s Haas. And as the Danish driver spun he then rolled back into the path of the Australian’s car. Ricciardo was bounced into the barriers and the Safety Car was deployed.

The caution finished at the end of lap 6 and there was immediate drama. Russell held the lead at the restart but Verstappen attacked Hamilton around the outside.

He got ahead of Hamilton in Turn 1 but the Briton fought back and as they went into Turn 2 there was contact and both immediately dropped down the field. Seconds later there was more drama as Norris hit Leclerc in Turn 6 and the Ferrari went off track. He managed to keep going, but rejoined at the back of the field.

At the end of the lap Verstappen and Leclerc pitted. The Dutchman took a new front wing and medium tyres and rejoined in P17 ahead of Leclerc.

The stewards put Verstappen’s clash with Hamilton under investigation and the Red Bull driver was handed a five-second penalty for causing the collision.

Russell now led, with Pérez in P2. Sainz moved to third ahead of Norris while Aston Martin’s Sebastian Vettel was in P6 ahead of Hamilton. Hamilton soon began to make his way forward again and he quickly passed Vettel and Norris to rise to fourth by lap 15.

Sainz was the first of the leaders to make a pit stop, due to a visor tear-off being caught in his rear right brake duct. The Spaniard was called in on lap 18 to shed his starting medium tyres for a set of softs.

Pérez pitted from P2 on lap 24 and he rejoined in P6 behind Bottas. The Mexican quickly cleared the Alfa Romeo, but as he did so Russell pitted for medium tyres and emerged ahead of the Red Bull as Hamilton took the lead.

Verstappen pitted just after his team-mate and after serving his time penalty and switching to softs he rejoined in P17.

Hamilton then made his first stop on lap 30, switching to medium tyres and the Mercedes driver slotted back in fourth place, behind Sainz.

Soon half distance, Russell led Pérez by five seconds and 5.2 clear of Hamilton who moved to third when Sainz made his second stop of the race, moving back to medium tyres for his final stint. He dropped to fourth place five seconds clear of fifth-placed Bottas.

Pérez was now beginning to come under pressure from Hamilton and on lap 44 Hamilton, with DRS, outdragged the Mexican on the long run across the line to take second place.

Pérez made his final stop of the afternoon on lap 48, moving to medium tyres for his final stint of the afternoon. Mercedes responded by bringing Hamilton into the pits at the end of the following tour and the Briton switched to soft tyres for the remainder of the race. Sainz climbed to second, though he was on ageing medium tyres, and Hamilton remerged in P3 ahead of Pérez.

The race changed on lap 52 when Norris lost power and stopped at the edge of the track at Turn 8. The VSC was deployed. Sainz took the opportunity to pit for soft tyres and rejoined in P4 behind Pérez. However, with Norris’s car apparently stuck in gear the caution was upgraded on lap 55 and the queue formed behind the physical Safety Car.

The Safety Car left the track at the end of lap 59. Russell controlled the restart well ahead of Hamilton, but Peerez, on medium tyres, came under heavy pressure from the soft-shod Sainz and Leclerc. Further back Verstappen, who had recovered to 10th, made a good restart and was soon up to seventh place. Pérez though, was really struggling and he was soon passed by Sainz, Leclerc and then on lap 65 by Alpine’s Fernando Alonso. That left him in P6 and his team then let the quicker Verstappen past to try to chase down Alonso. He was told that if he couldn’t catch the Spaniard he would need to cede the place back to his team-mate.

Minutes later Russell crossed the line to take his first win, at the 81st attempt, with Hamilton taking P2 ahead of Sainz, Leclerc and Alonso.

Verstappen, though, refused to hand sixth place back to his team-mate, a decision that resulted in much radio chatter on the Red Bull pit wall. Pérez was left with seventh ahead of Ocon, Bottas and Aston Martin’s Lance Stroll.

The result means that Checo goes to the final race of the season level with Leclerc on 290 points but in third place due to his Ferrari rival being ahead on race wins. Russell’s win leaves him fourth, on 265 points, 25 ahead of team-mate Hamilton.