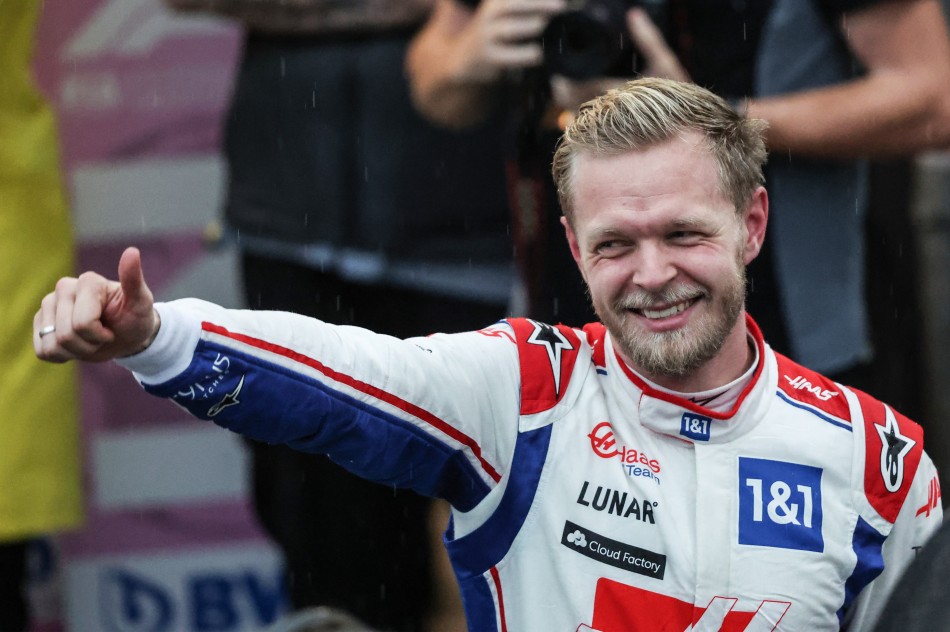 Haas F1’s Kevin Magnussen took a shock but heugely popular pole position for the Sprint at the 2022 FIA São Paulo Grand Prix, beating World Champion Max Verstappen and Mercedes George Russell as a combination of red flags and rain kept the Danish driver at the top of the timesheet until the chequered flag at the end of Q3.

With rain in the air at the start of Q3, Magnussen benefited from being the first man out on track at the start of the top-10 shootout. And after taking provisional pole ahead of Verstappen with his first flying lap the session was halted when Russell, beginning his second run after claiming P3 with his first, went off track in Turn 4. The red flags came out and the cars filtered back to the pit lane. Rain then began to fall and as conditions worsened any hope of finding improvements when the session restarted faded, leaving Magnussen to joyously claim his and Haas’ first pole position.

“I don’t know what to say,” he said afterwards. “The team put me out in the perfect position, did a pretty decent lap and we are on pole! It’s incredible, thank you. Maximum attack [tomorrow], let’s go for something funny.”

Earlier, with the Interlagos track still damp after rain showers between FP1 and the start of Q1, a queue of drivers formed at the end of the pit lane ahead of the green lights, all on intermediate tyres.

It was Charles Leclerc who set the early pace in the session, with the Ferrari driver posting a time of 1:18.723. However, with his first flying lap Verstappen jumped to the top of the order with a lap of 1:18.495.

Then, with nine minutes remaining Pierre Gasly became the first driver to make the move to slick soft compound tyres, and the AlphaTauri driver soon roared to the top of the timesheet with a lap of 1:17.626.

His lap sparked a mass change to slicks and McLaren’s Lando Norris claimed P1 ahead of Verstappen. The times were tumbling, though, and the session became a matter who could cross the line last before the flag and put in a final flyer.

And when the final runs shook out, Norris took P1 with a lap of 1:13.106 ahead of Mercedes’ Lewis Hamilton and Alpine’s Fernando Alonso, with Aston Martin’s Sebastian Vettel fourth ahead of Red Bull’s Sergio Pérez and team-mate Verstappen. In the drop zone, and ruled out, were Williams Nicholas Latifi in P16, followed by the Alfa Romeo pair of Zhou Guanyu and Valtteri Bottas, AlphaTauri’s Yuki Tsunoda and in 20th place, Haas’ Mick Schumacher.

Drizzle began to fall as the final runs started by Verstappen went quicker and he improved in first place with his first flyer of 1:10.881. He was followed by Ferrari’s Carlos Sainz and Charles Leclerc, with the top three covered by just seven hundredths of a second. Ruled out at the end of the middle segment, though, were Williams’ Alex Albon in P11 followed by Gasly, Vettel, McLaren’s Daniel Ricciardo and Aston Martin’s Lance Stroll.

With rain incoming for the final segment, Ferrari gambled by putting Leclerc on intermediate tyres. Ahead of the Monegasque driver, Magnussen, the first man on track at the start of the session, crossed the line to take provisional pole ahead of Max, but by now Leclerc was clearly struggling for pace, and his woes then became those of Pérez. On his flying lap the Mexican came across the slower Leclerc and his final sector was compromised. Leclerc took a desultory P10 while Pérez was only marginally quicker in P9.

Leclerc pitted at the end of his next lap while Pérez went for another attempt. However their efforts were stymied when Russell went off the track in Turn 4. With the Mercedes driver’s car beached in the gravel the red flags came out. And then the rain began to fall.

The session resumed after an eight-minute delay, but with rain falling there was no chance of any improvement and for the first time in his career Magnussen claimed an unlikely pole position ahead of Max.

Russell claimed third despite his off-track excursion ahead of Norris, while Sainz took fifth. The Ferrari driver will take a five-place grid penalty for Sunday’s race due to a power unit change. Alpine’s Esteban Ocon was sixth in the session ahead of team-mate Alonso, Hamilton qualified eighth and Checo had to settle for P9 for the Sprint ahead of Leclerc.