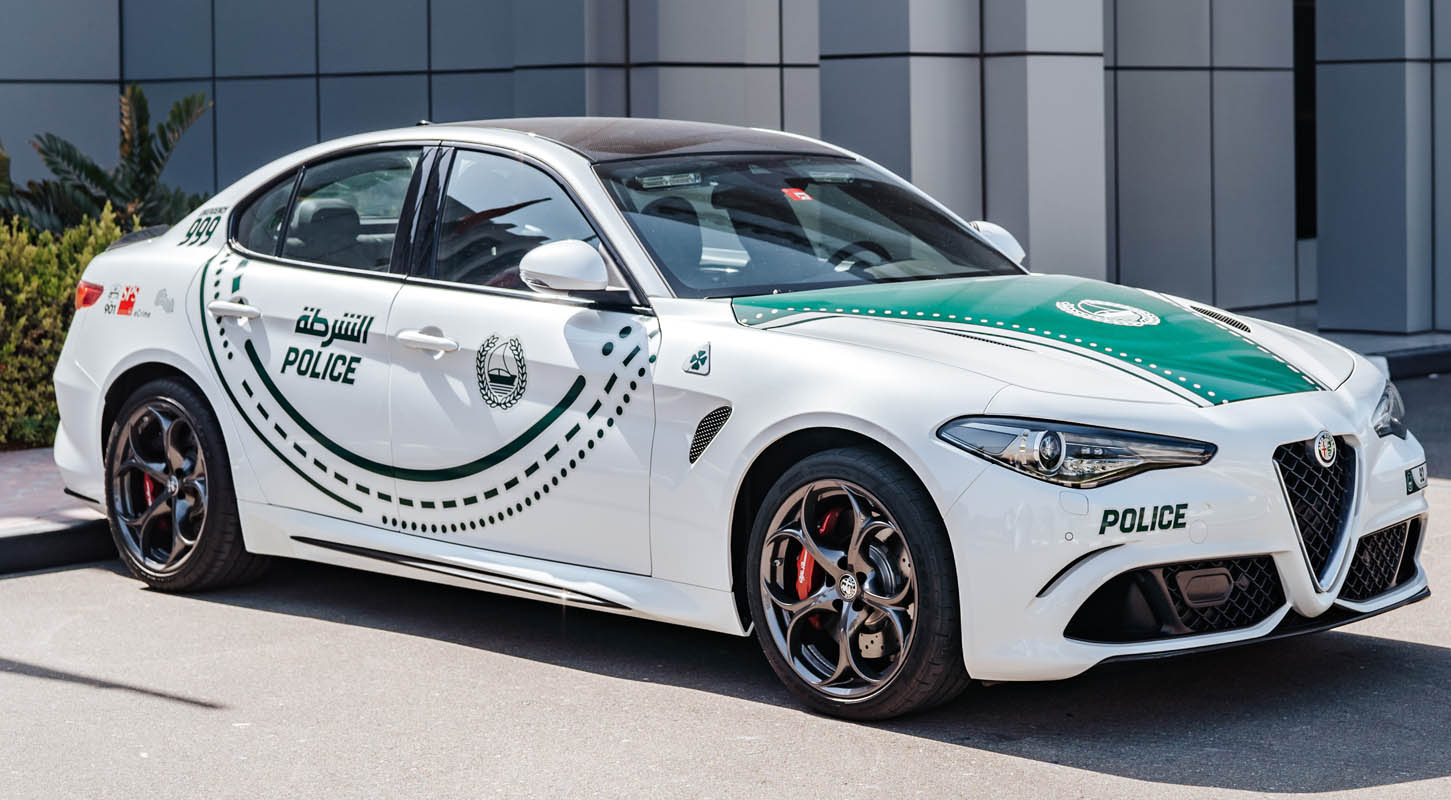 At the ceremony, Brigadier Jamal Al Jallaf was briefed on the two models’ specifications, which featured V6 engines delivering an exhilarating 510 hp and acceleration speeds from 0 to 100 km/h in less than 3.9 seconds, allowing the cars to set new standards in their respective segments.

The Giulia Quadrifoglio is considered the fastest mass-produced 5-seater car in the world, while the Stelvio Quadrifoglio currently holds the world record for the fastest SUV lap around the iconic Nürburgring circuit. In addition to their powerful engines, both models feature carbon fibre roofs, placing them amongst the lightest vehicles in their segments. The cars also feature an active aero front splitter which optimizes down force support to increase driving agility.

Brigadier Jamal Al Jallaf commended Dubai Police’s profound collaboration with Gargash Motors, a leading name in the UAE automotive sector: “By adding premium cars to its luxury car patrol fleet, The Dubai Police General Command aims to elevate the presence of police officers in key touristic destinations and other locations, which will reinforce Dubai Police’s existing fleet of luxury vehicles, in addition to supporting their strategic goals in maintaining safety and security.”

Commenting on the latest partnership, Morgan Sunderland, General Manager of Gargash Motors said: “At Gargash Motors, we take pride in our long-standing partnership with Dubai Police, which led to several strategic initiatives and collaborations over the past decades. As the official representatives of Alfa Romeo in the UAE and based on our deep understanding of the brand identity, we are confident that these two models are the perfect addition to the Dubai Police premium car fleet. Our cars are carefully engineered for unrivalled performance and safety, coupled with an esteemed design language which makes them the ultimate expression of Italian style within the automotive world.”

Further commenting on the collaboration, Rakesh Nair, Managing Director of European Brands at Stellantis Middle East, the parent company of Alfa Romeo, remarked: “With over a century of racing heritage, Alfa Romeo has offered the best in high performance, class and innovation, showcasing sophisticated design and cutting-edge technology. The Alfa Romeo Giulia Quadrifoglio and Stelvio Quadrifoglio vehicles are the perfect representation of our legacy and will add a unique Italian touch to Dubai Police’s car fleet. The recently added models further reflect the innovation that is synonymous with Dubai’s culture, while their power and handling supply the police force with speedy response capabilities when called to the scene.”

The Quadrifoglio is an emblem which distinguishes Alfa Romeo’s racing models. Born as a sporting legend in 1923, it became the symbol of excellence in its range.  The trademark pays homage to the great GP races of the past and adorns the sportiest models of Giulia and Stelvio. The two models present exclusive exterior details, such as the four-tip exhaust system with its specific extractor integrated into the rear bumper, and refined materials for the interior including carbon fibre, leather and Alcantara coating. 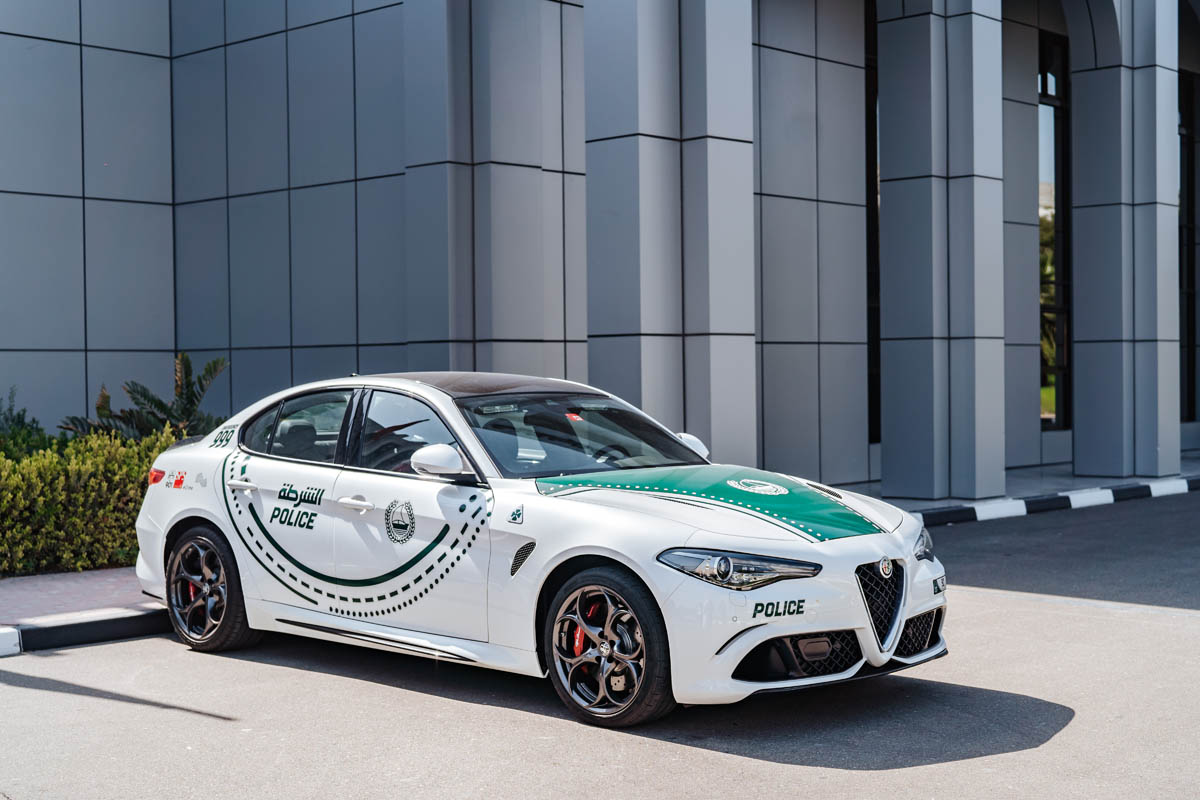 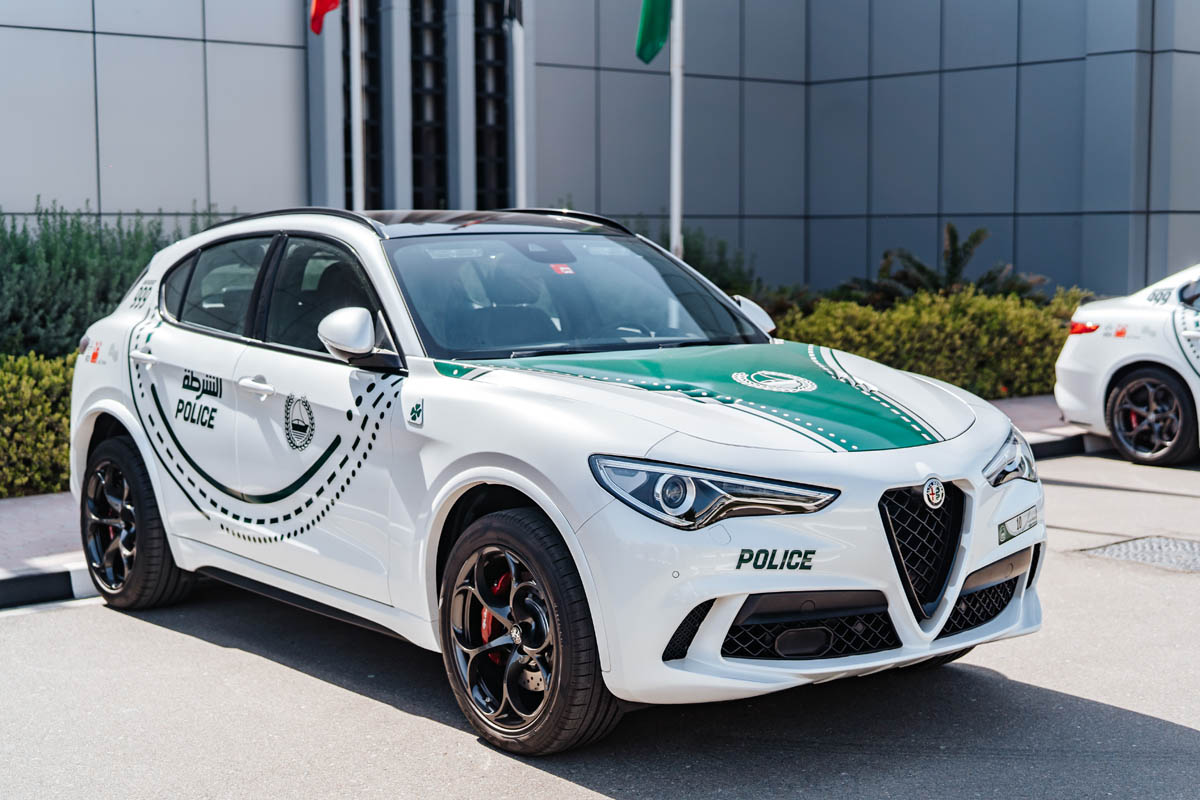 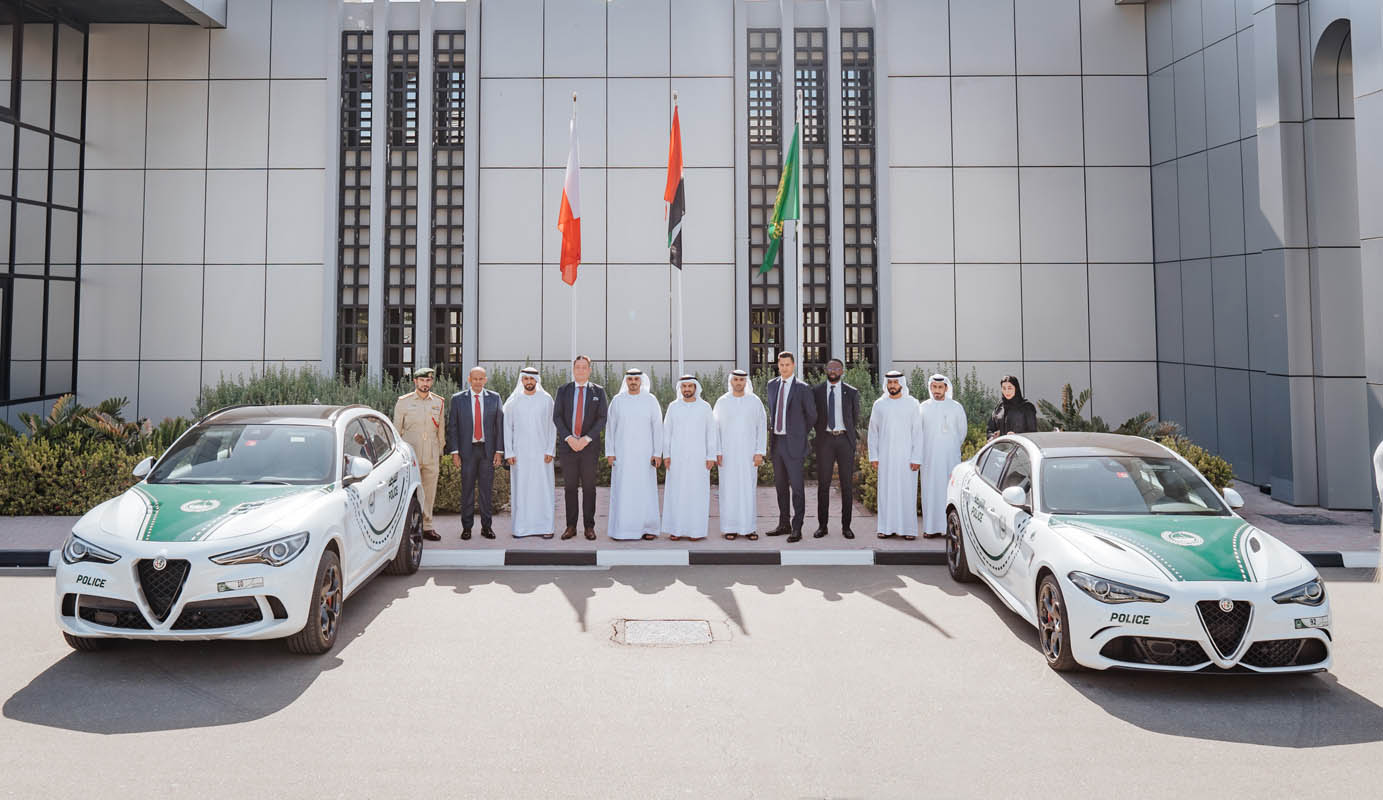 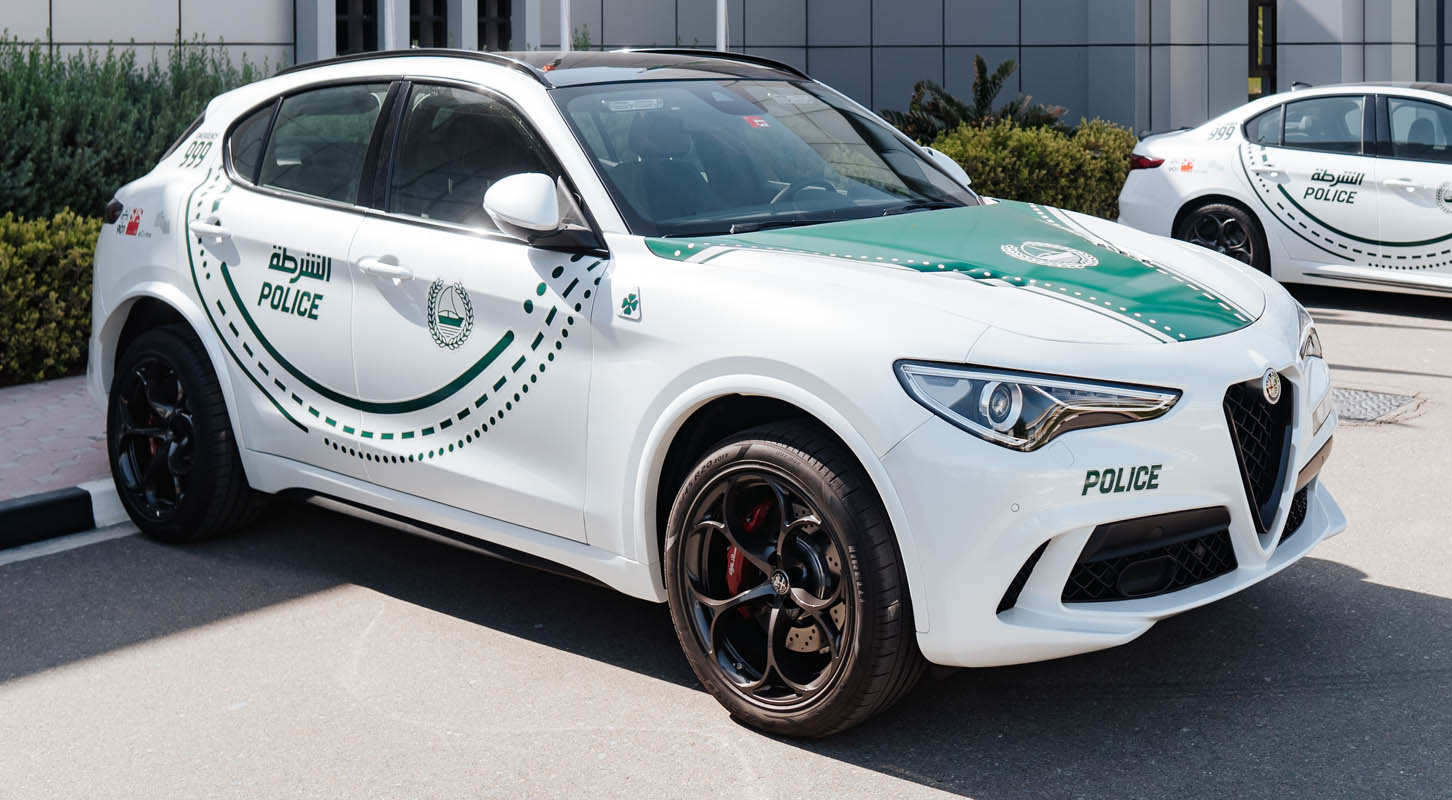 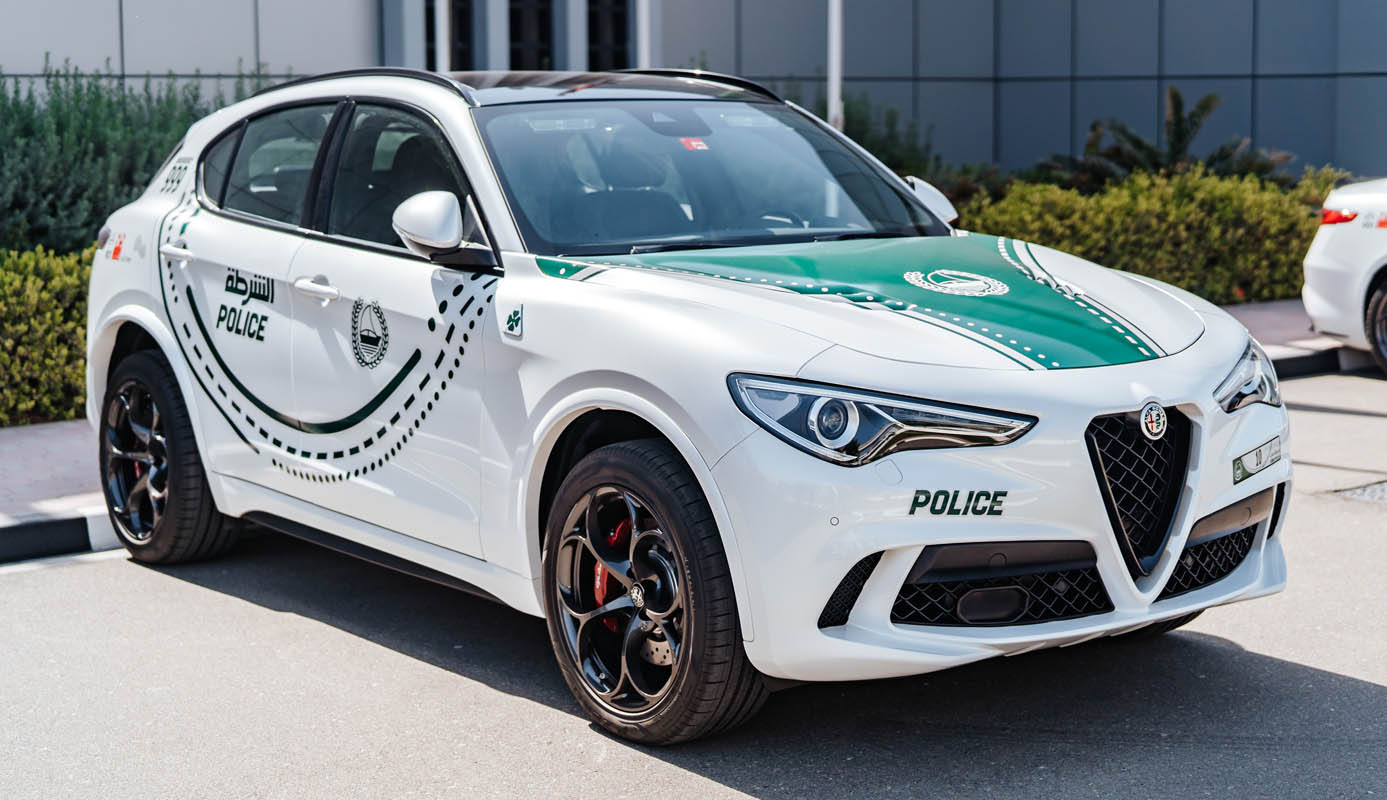 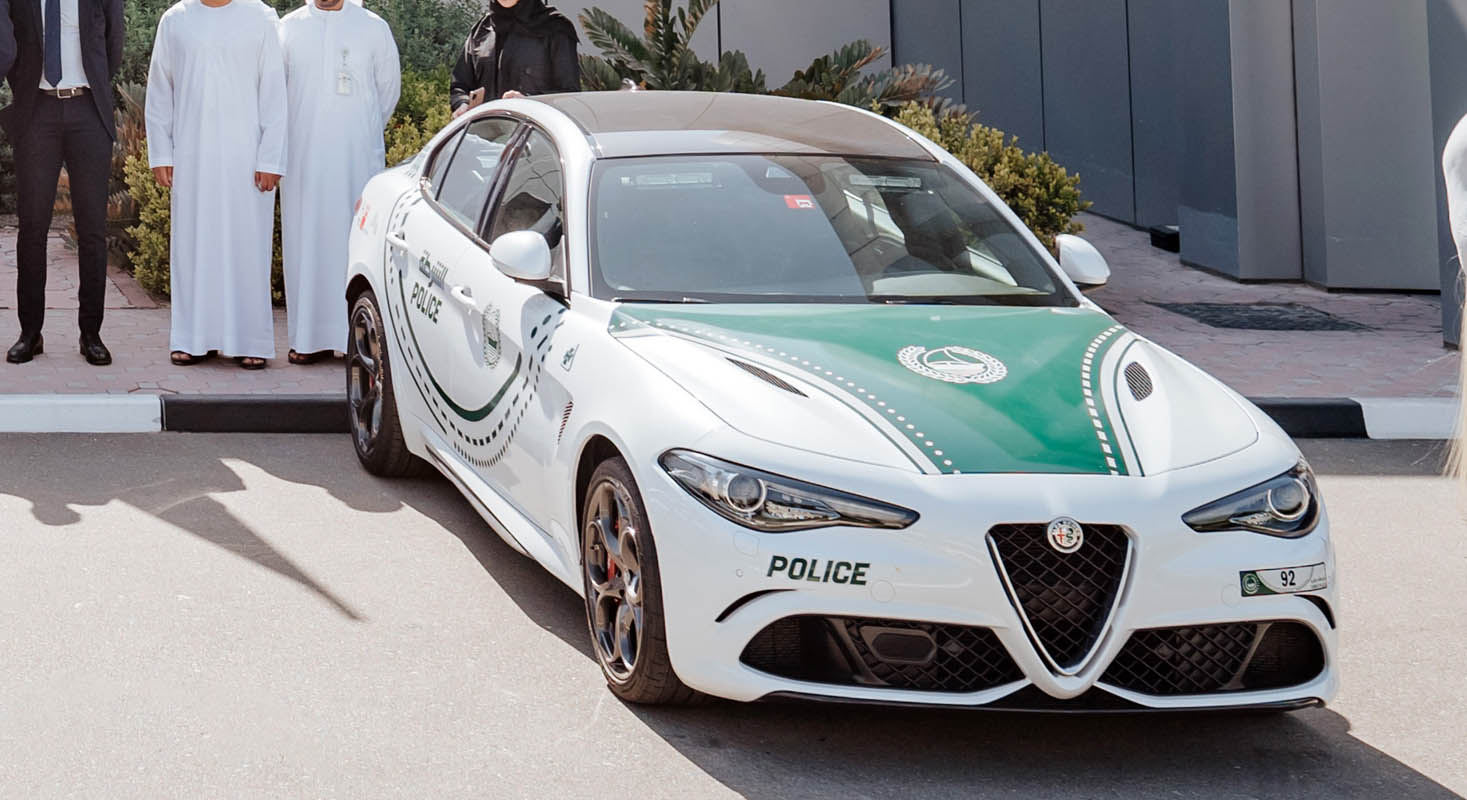 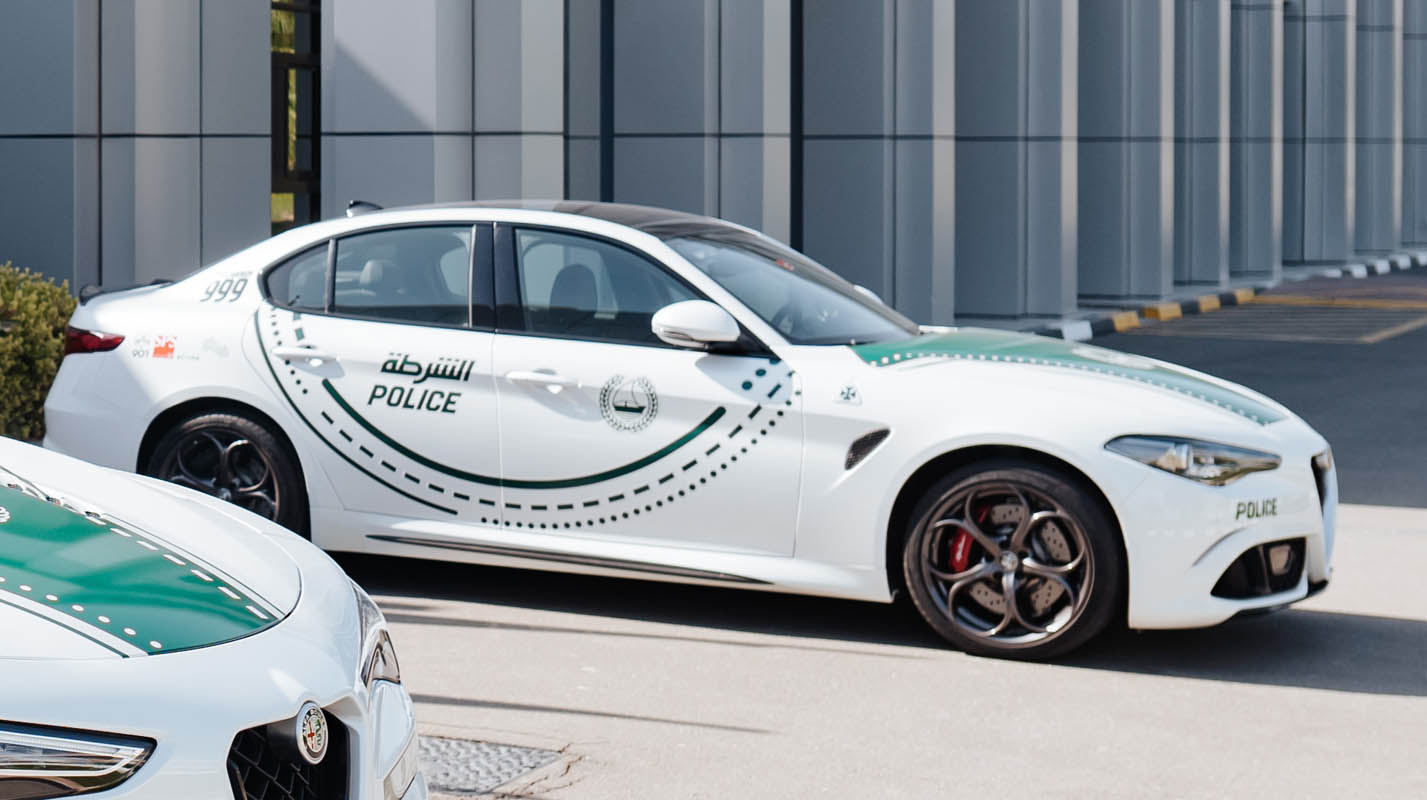 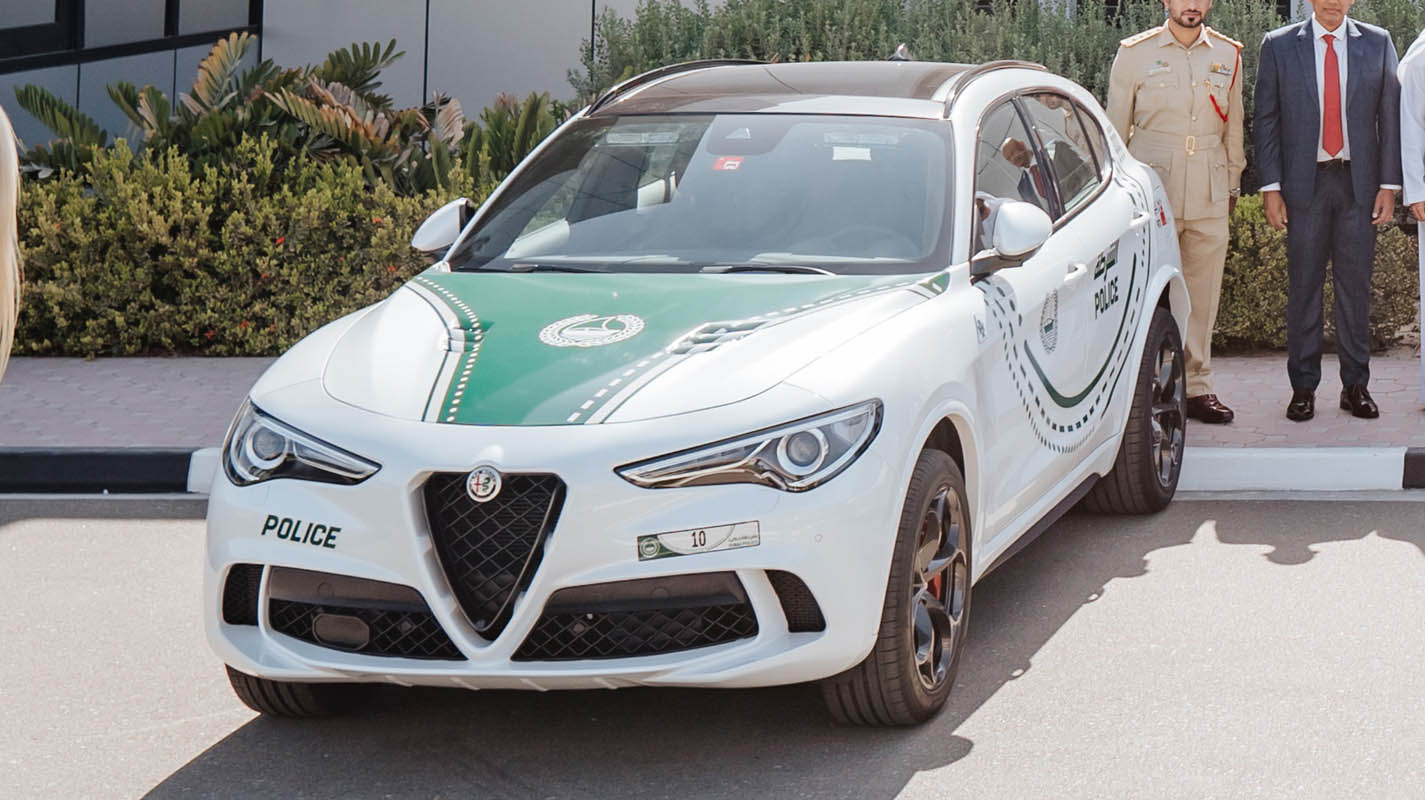 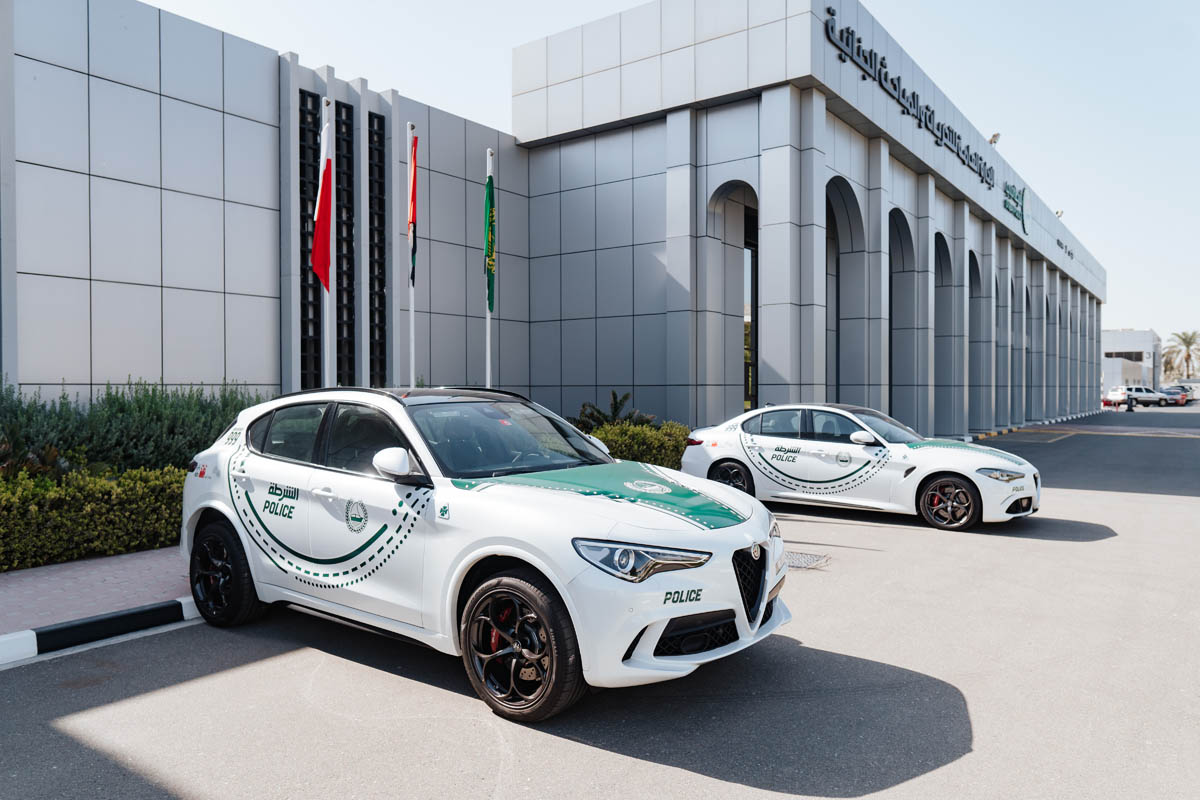 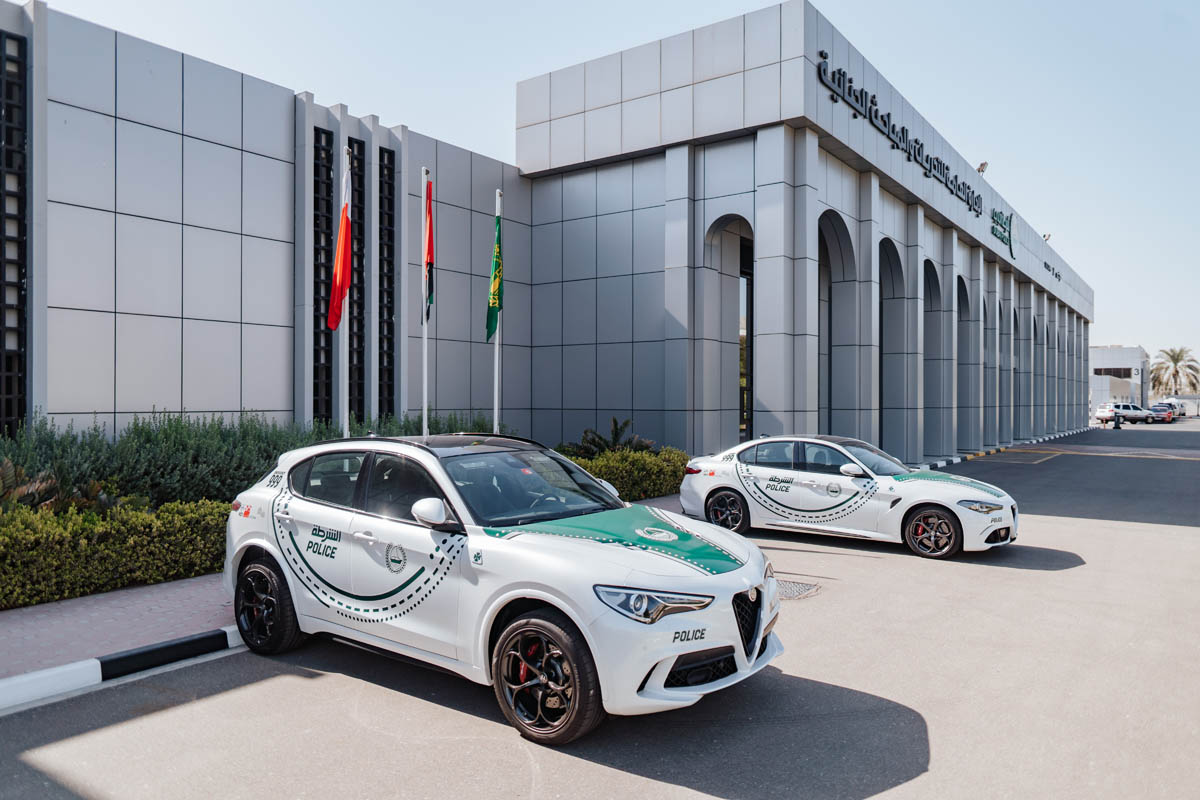 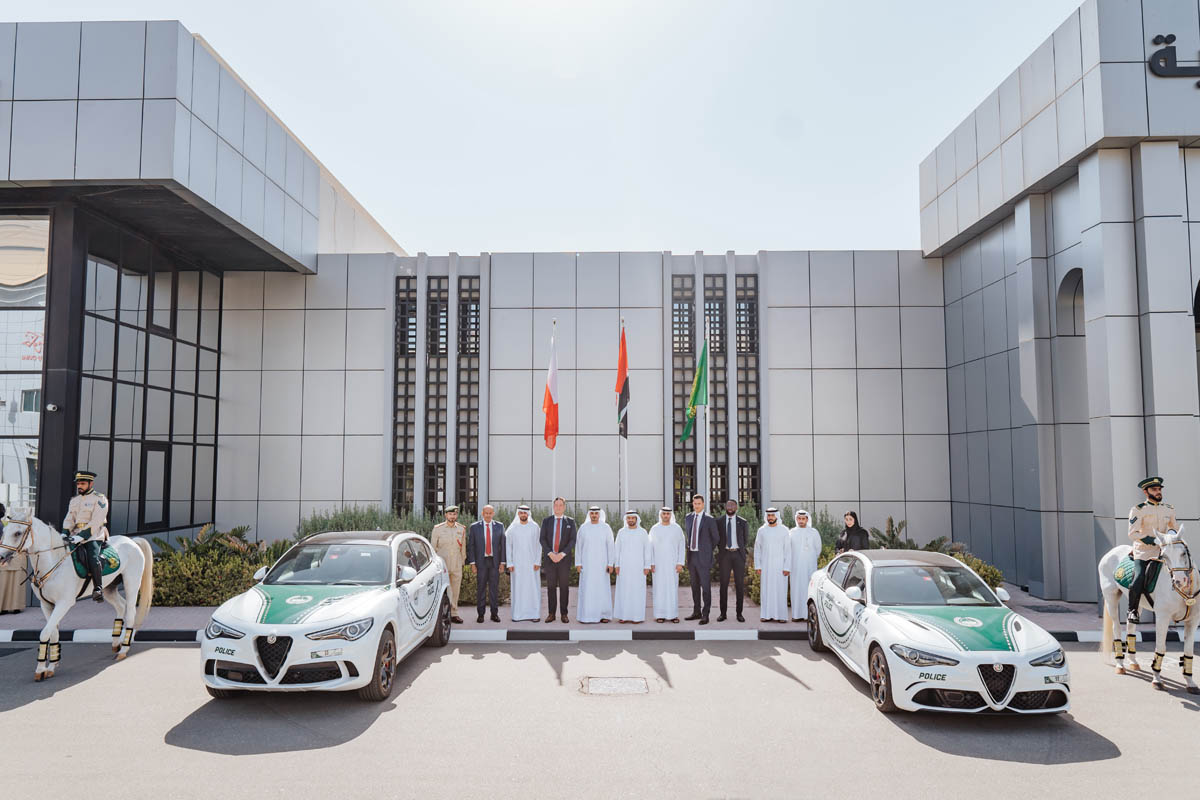