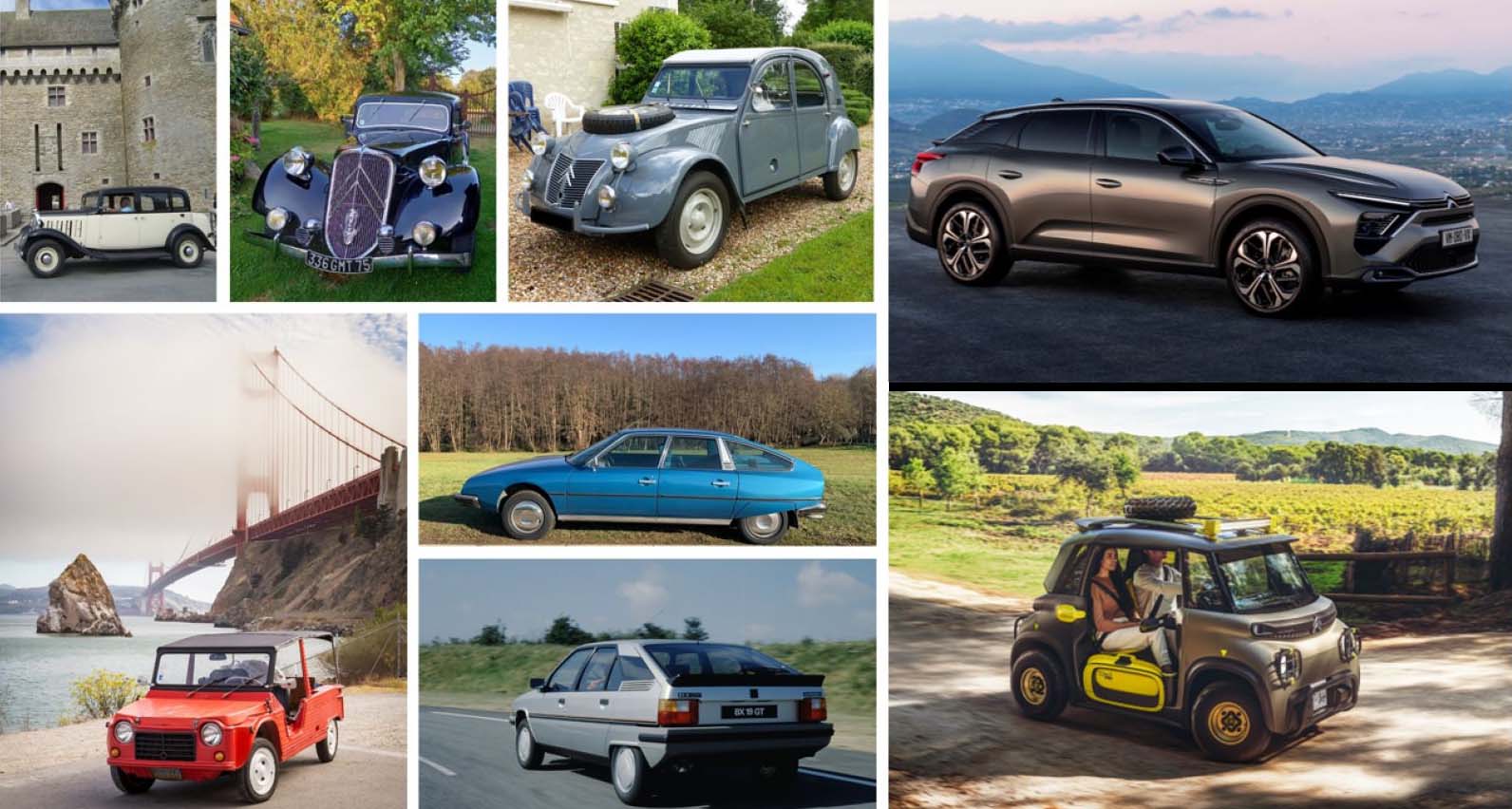 The C5 X is being unveiled to the public for the first time. The latest worthy addition to the Brand’s line of grand tourers, the C5X is a return to the segment’s basics and boasts avant-garde lines, managing to be a saloon, an estate and an SUV all at the same time. In the pure tradition of bold and innovative Citroën vehicles, the C5 X is an invitation to serenely travel in a passenger compartment that could almost be a lounge, enjoying ultimate comfort provided by its Citroën Advanced Comfort active suspension system – a world first. C5 X is packed with cutting-edge technologies geared towards well-being and safety, such as the Extended Head-up Display, semi-autonomous driving and voice recognition.

My AMI Buggy CONCEPT – the Mehari of the modern era

By including the My AMI Buggy Concept in this retrospective, Citroën is illustrating its version of a contemporary object – one that is designed with mischief in mind for all those who love independence and who are capable of being adventurers on roads or along the beach while they’re at the wheel. A modern-day Mehari, My AMI Buggy Concept is adorned with numerous styling features and accessories to assert its adventurous personality in its door-free passenger compartment.

The BX celebrates its 40th birthday

First unveiled under the Eiffel Tower on 23 September 1982, the BX made its mark both in the way it was staged and through its style and avant-garde design. A few days later, on 30 September 1982, the 69th Paris Motor Show opened its doors at the Porte de Versailles exhibition centre and the BX became one of the undisputed stars of the show. A fully-fledged commercial success, the BX – which was built at the Rennes La Janais plant in Brittany and the Vigo plant in Spain – sold more than 2.3 million units before production finally ended in June 1994.

Citroën turned to the famous Italian coachbuilder Bertone to design the bodywork. The designer Marcello Gandini then proposed an original shape – one that was rugged but devoid of all eccentricity. It stood out on the automotive landscape of the time and came to be emblematic of the BX. Equipped with a tailgate, the BX is a 4.23-m long hatchback that could accommodate up to five passengers in comfort, cradled by the constant-level hydro-pneumatic suspension. The CX-inspired dashboard featured iconic equipment, such as satellite controls on either side of the steering wheel and the backlit tachometer. Packing powerful engines right from when it was first released (62 bhp and 72 bhp 1360 cc, 90 bhp 1580 cc), the BX was surprisingly dynamic. It was innovative in its use of composite materials for parts such as the bumper, boot lid, bonnet and quarter-panels, weighing in at just 885kg.

The BX’s 12 years on the market were marked by numerous changes in bodywork (estate version, a major restyling, a company version), equipment (sunroof, air conditioning, digital instrumentation) and powertrains (power up to 160 bhp, electronic fuel injection, automatic gearbox, permanent 4-wheel drive). A limited series of 200 units of the civilian version of the BX 4 TC group B competition car (2141 cc, 200 hp, 220 km/h) were even available.

The car underwent a major restyling in 1987. The BX was given a softer exterior and a completely new dashboard.

With such a rich life and with so much in the way of commercial success, the BX left its mark on Citroën’s history. Naturally, it has a place in the hearts of collectors who will delight in celebrating its 40th birthday.

OTHER HISTORIC CITROËN CARS FOR A JOURNEY BACK THROUGH TIME!

To keep the C5 X company, Citroën – with help from Citroën collectors’ clubs – is providing an opportunity to get reacquainted with some of the iconic models that have marked the history of the make’s grand tourers. Between tradition, know-how and innovation, enjoy a journey from the 1930’s to the present day…

Traction Avant 15/6: Marketed for 23 years, from 1934 to 1957, no fewer than 758,948 Traction units – available in 4-door saloon, coupé and cabriolet versions – were built. A legendary vehicle that marked the history of France during the Second World War, the Traction was technically revolutionary. It was the first mass production car to have front-wheel drive, independent front suspension, a hydro-pneumatic suspension system for the rear wheels of the 15/6 H in 1954 , hydraulic braking and a monocoque body. The result was road holding that most of its contemporaries had difficulty matching. The Traction rightly earned the nickname “Queen of the Road”.

CX 2000 Pallas: The CX embodied Citroën’s high-end range from 1974 to 1991. A total of 1,042,460 units were built. In recognition of its commercial success, the CX was voted Car of the Year in 1975. A true 4-door car despite its hatchback silhouette, the CX was the very essence of Citroën: hydro-pneumatic suspension, 4 disc brakes and front-wheel drive. The CX was remembered for its single windscreen wiper, concave rear window and lunula dashboard, as well as with its iconic extended “Prestige” version.

Alongside My AMI Buggy, these vehicles belonging to Citroën collectors are a reminder that daring, creativity and technology have always gone hand-in-hand with the spirit of adventure.

2 CV Sahara: How could anyone fail to dream of adventure when standing in front of one of the 694 2 CV 4×4 Saharas built? It was simple and sturdy, with one engine at the front and another at the rear. With its raised body and spare wheel on the bonnet, it was essential for any desert crossing.

US Mehari: Yes – the famous Mehari made its way to the other side of the Atlantic. In 1970 and 1971, a thousand of them arrived in the US. Adapted for compliance with local standards, the US version of the Mehari distinguished itself from its French cousins with its oversized round headlights. Although an ideal leisure vehicle for Florida, the Mehari was only a minor success in the US.

While we wait for Rétromobile to open its doors to the public, you can view some of the most iconic models from the Brand’s history on the Citroën Origins website: www.citroenorigins.com  (virtual museum featuring 79 vehicles, available in 65 countries).