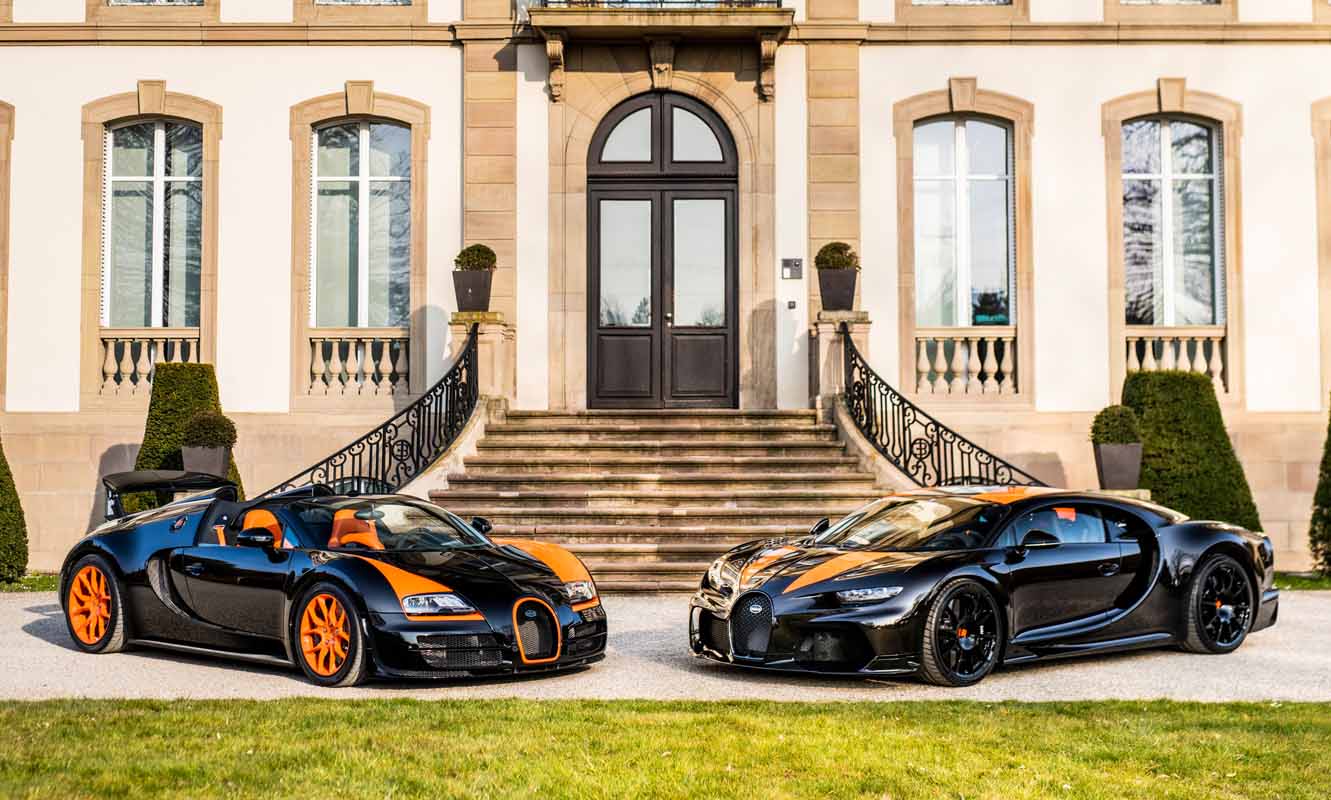 Château Saint-Jean, deep within the heart of Bugatti’s home is the place where Ettore Bugatti – the marque’s founding father – used to receive customers and celebrate the delivery of their new automobile in style. Over many decades as customers entered the famed Molsheim grounds, passing under the Historic Gate, countless unforgettable handovers have taken place. Recently, one of the most passionate Bugatti owners paid a visit to Molsheim and left with not one but eight new Bugatti models: Chiron Super Sport 300+1, a one-of-eight Veyron Grand Sport Vitesse World Record Edition certified by “La Maison Pur Sang”, alongside six Bugatti Baby IIs in bright spring colours.

The Molsheim experience is unlike any other vehicle handover – because it’s so much more than simply a handover of a car. For customers, it is an opportunity to tread the same ground as Ettore Bugatti or to touch and smell a century of Bugatti history. From start to finish, it is carefully designed to create anticipation and excitement, leading towards the crescendo of the vehicle unveil.

The owner of the eight new Bugatti models is a testament to the affection and loyalty customers of the brand develop over time, and their desire to share this passion with those around them. All six of his children were flown out to Bugatti’s home from across the world so each could experience the magic of Ettore’s vision, explore the Atelier and witness how the brand’s hyper sports cars are created. In short, he wanted them to experience the magic of Molsheim for themselves, fully understanding what it means to be part of the Bugatti family.

From the beautiful restored stables, once home to Ettore Bugatti’s much-loved horses, to the intricately engineered Orangery, the owner and his family were guided through the grounds of the Chateau. They entered through an unassuming door into a room full of priceless Bugatti vehicles, including an example of the legendary Type 41 Royale and Type 35 racer, before being escorted to the new state-of-the-art Atelier where all modern Bugatti vehicles are meticously hand-crafted. Almost within touching distance of each other, Bugatti legends of the past sit with Bugatti legends of the future.

At the conclusion of the tour, it was time for the grand unveil – with one special surprise. Throughout many years of Bugatti ownership, this particular customer had developed a rapport with Bugatti Pilote Officel, Andy Wallace, and the team devised a special moment to reunite him with Andy on this momentous day.

With the eight models lined up with millimetric precision at the foot of the steps to the legendary Chateau – home to a treasure trove of invaluable Bugatti artefacts – the Chiron Super Sport 300+ lay underneath a silk cover. Under the guise of testing a new voice-activated starting technology, the car was seemingly spoken into life, while Andy sat inside and pushed the steering wheel-mounted ‘Engine’ button to spark the advanced 8.0-liter W16 powertrain. Simultaneously the silk cover was removed, and the secret was revealed.

The Chiron Super Sport 300+ attracted global attention in 2019 when it became the first production series car to surpass the seemingly unreachable 300 mph barrier, achieving a top speed of 304.773 mph (490.484 km/h) at the hands of Andy Wallace himself. Customer Chiron Super Sport 300+ models are inspired by this record-breaking achievement, of which only 30 highly exclusive units have been made – all of which are now secured.

It is the latest in a line of extraordinary record-breaking Bugattis, led by the Veyron World Record Edition and Veyron Grand Sport Vitesse World Record Edition. The latter became the fastest open top car in the world in 2013, reaching a maximum speed of 254.04mph (408.84km/h) with an advanced 1,200 PS iteration of Bugatti’s legendary 8.0-liter quad-turbocharged W16 engine. Only 8 cars were produced and delivered, and this owner’s example comes with official certification from La Maison Pur Sang. With an example now added to his collection, alongside the Chiron Super Sport 300+, the line-up of true speed legends has been completed.

Operating exclusively at the headquarters in Molsheim, La Maison Pur Sang certification program verifies the authenticity of models of all ages from the marque’s illustrious history. The program also offers customers and collectors an extensive range of restoration and reconfiguration options.
Six Bugatti Baby IIs

Ready for delivery alongside the Chiron Super Sport 300+ and the Veyron Grand Sport Vitesse World Record Edition were no fewer than six custom-made Bugatti Baby II models – every unit carefully curated for each of the owner’s children. A Yellow, Red, Blue, Green, White and Orange model were lined up outside Château Saint-Jean to form a stunning spectacle.

To celebrate the marque’s 110th anniversary in 2018, Bugatti partnered with The Little Car Company to develop a modern-day version of the original Bugatti Baby model. In 1926, Ettore Bugatti created a half-scale Type 35 for his son Jean to experience, only for such significant customer interest to force Ettore to put the vehicle into production.

Limited to 500 units – in keeping with original production numbers – the Baby II is a 75% scale, electrically powered reincarnation of its forefather. Each component of the Baby II is meticulously manufactured to the very same quality as its full-scale, W16-powered siblings.

The Baby II is designed to be enjoyed by any generation of driving enthusiast. Each model has both short and long-range battery options, with a range of up to 31 miles depending on driving style. Combined with authentic Type 35 handling, the Baby II has the ability to reach a top speed of 42 mph.

The historic grounds of Château Saint-Jean provided the perfect environment for new owners, young and old, to become acquiainted with their new Bugattis on a short drive; the children in their individual Bugatti Baby IIs and the father in his Veyron Grand Sport Vitesse. 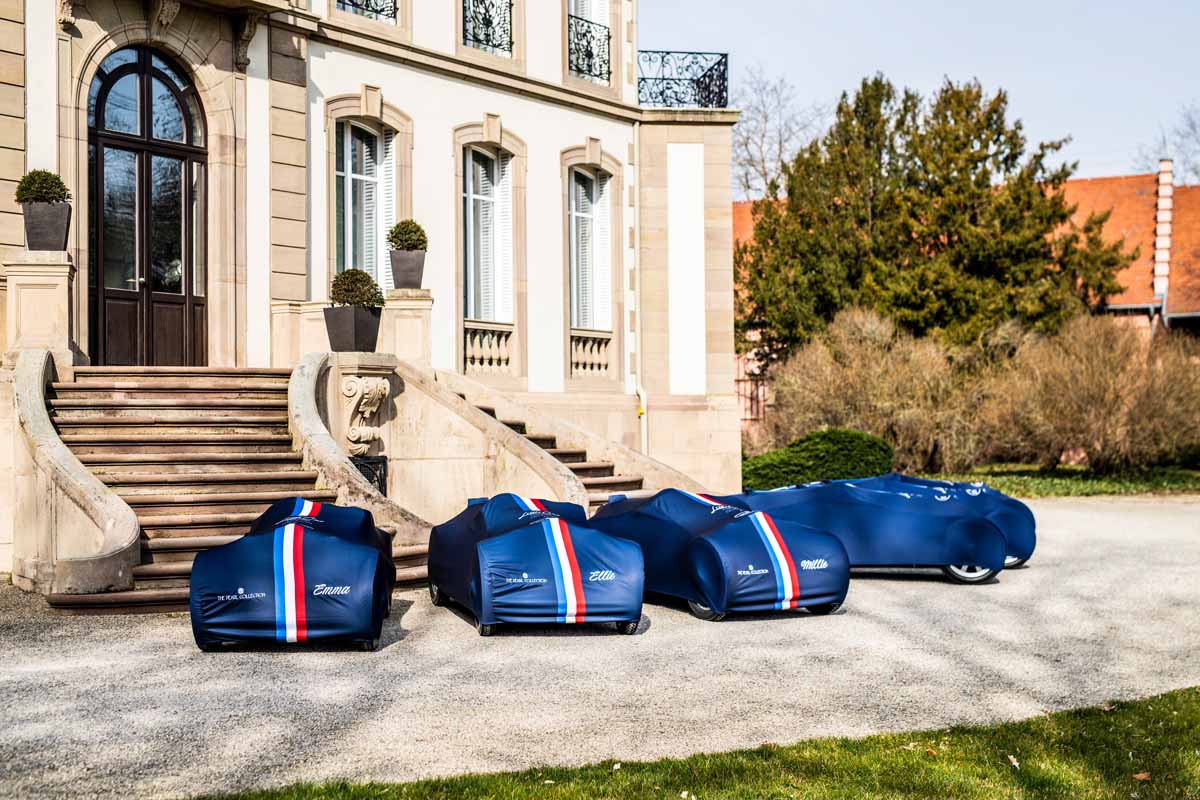 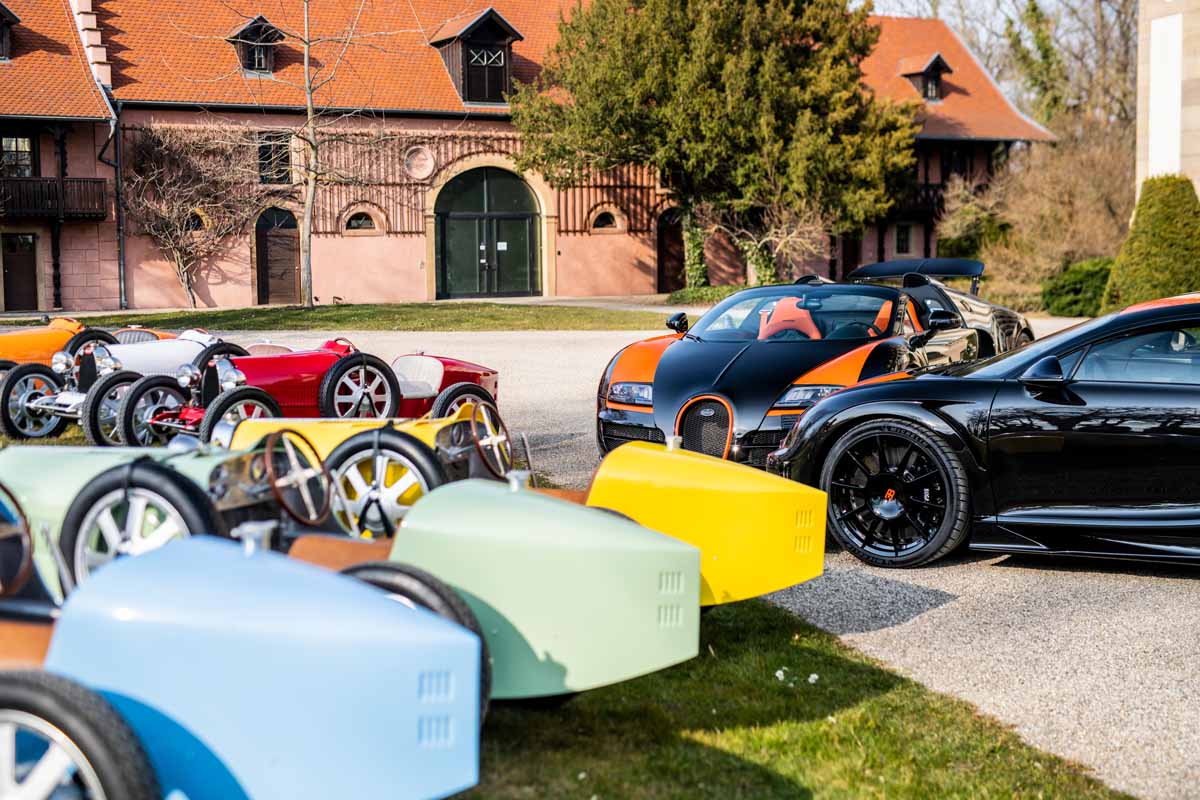 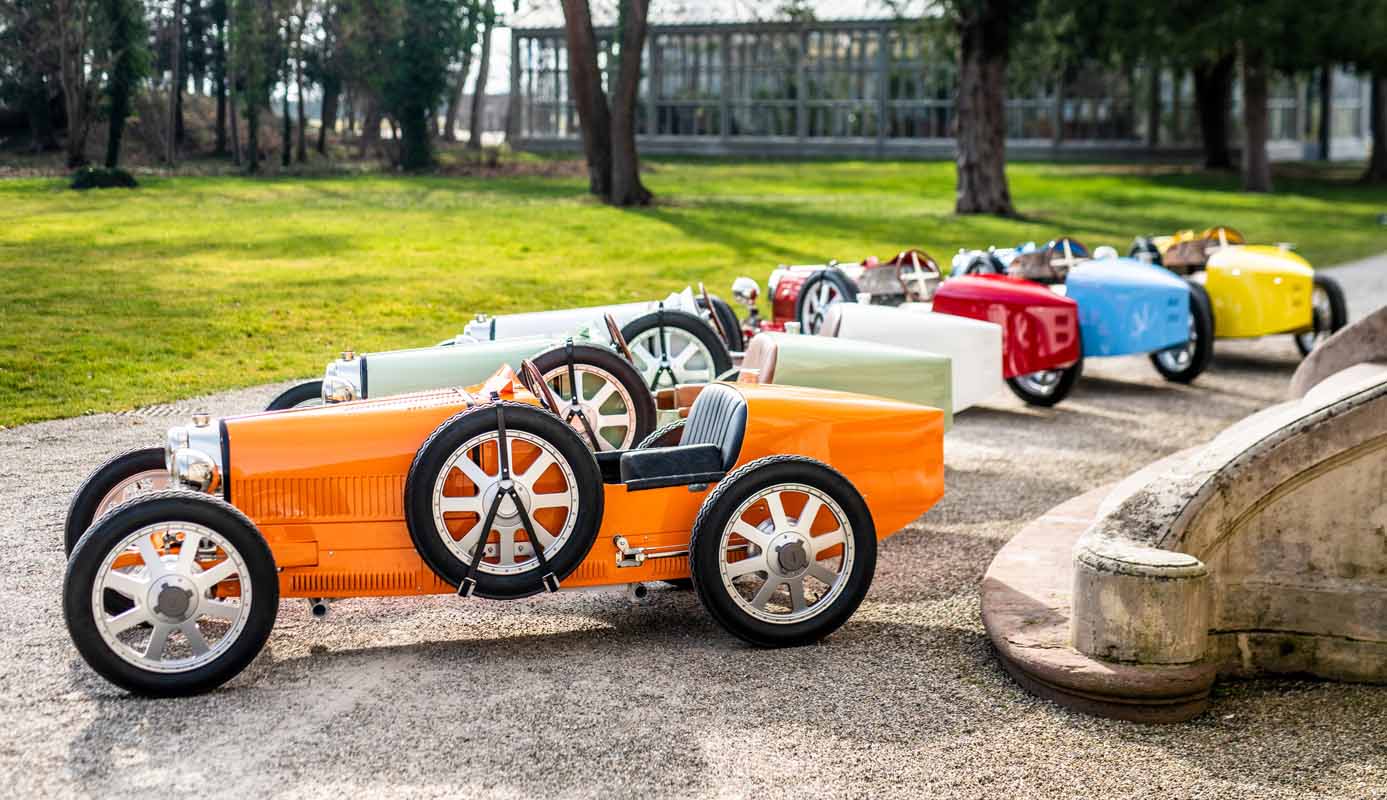 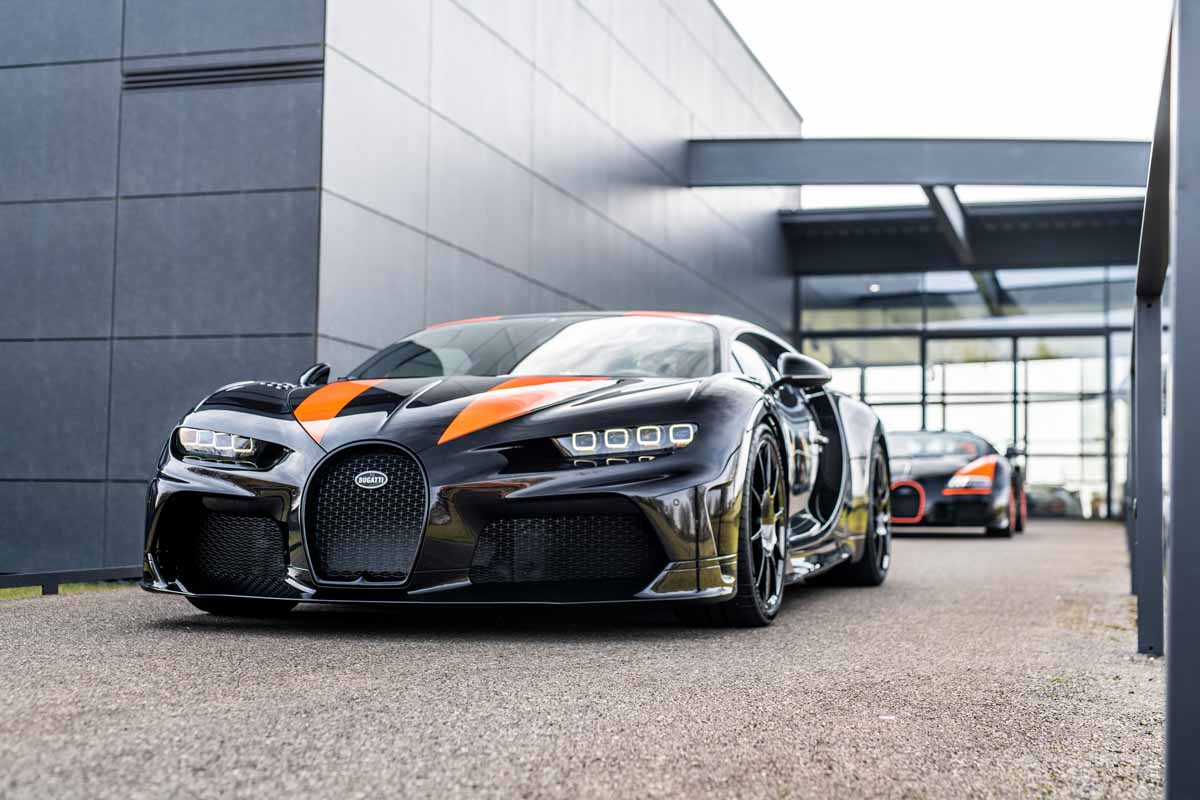 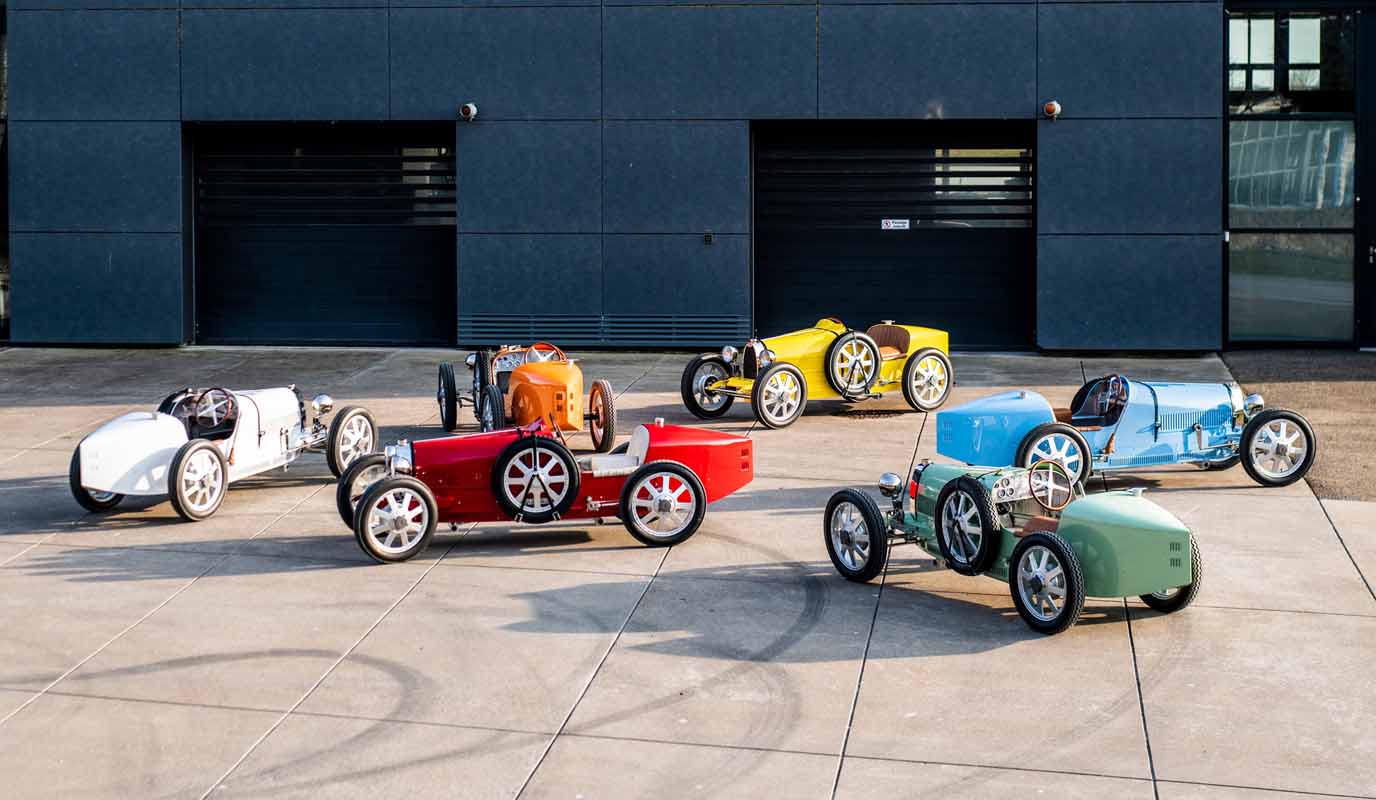 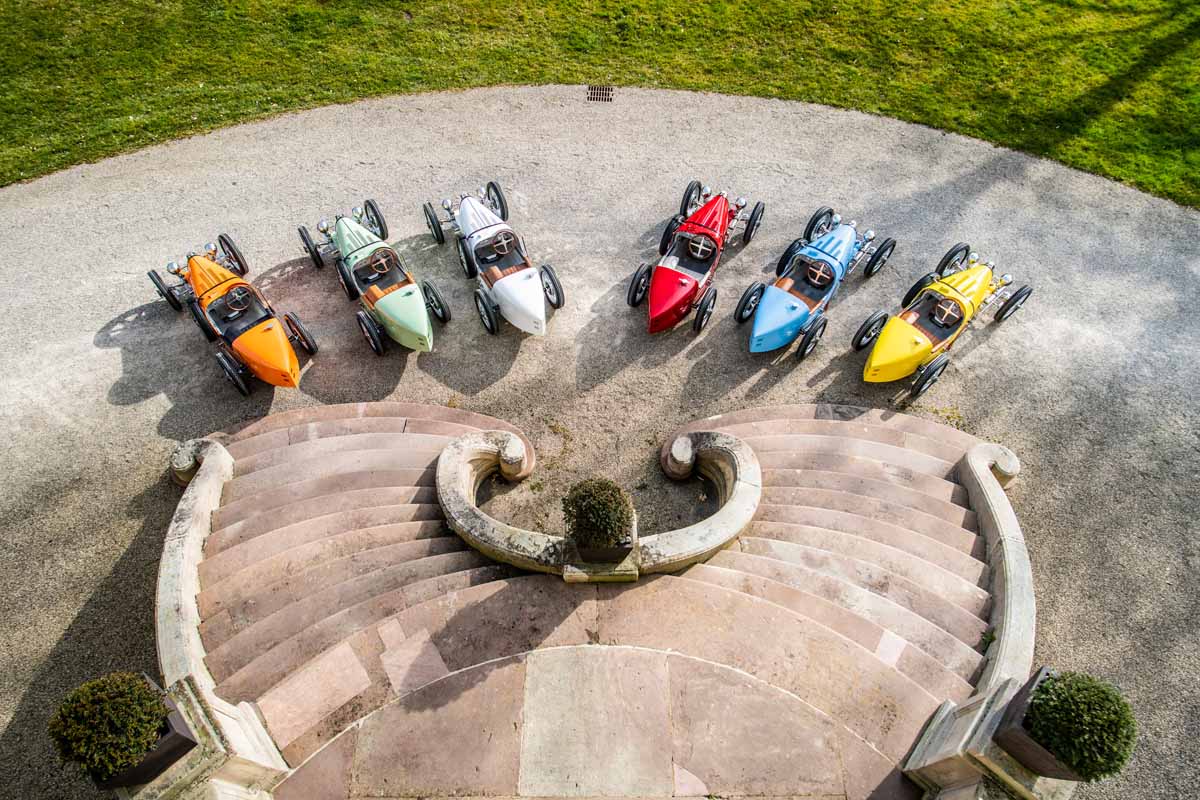 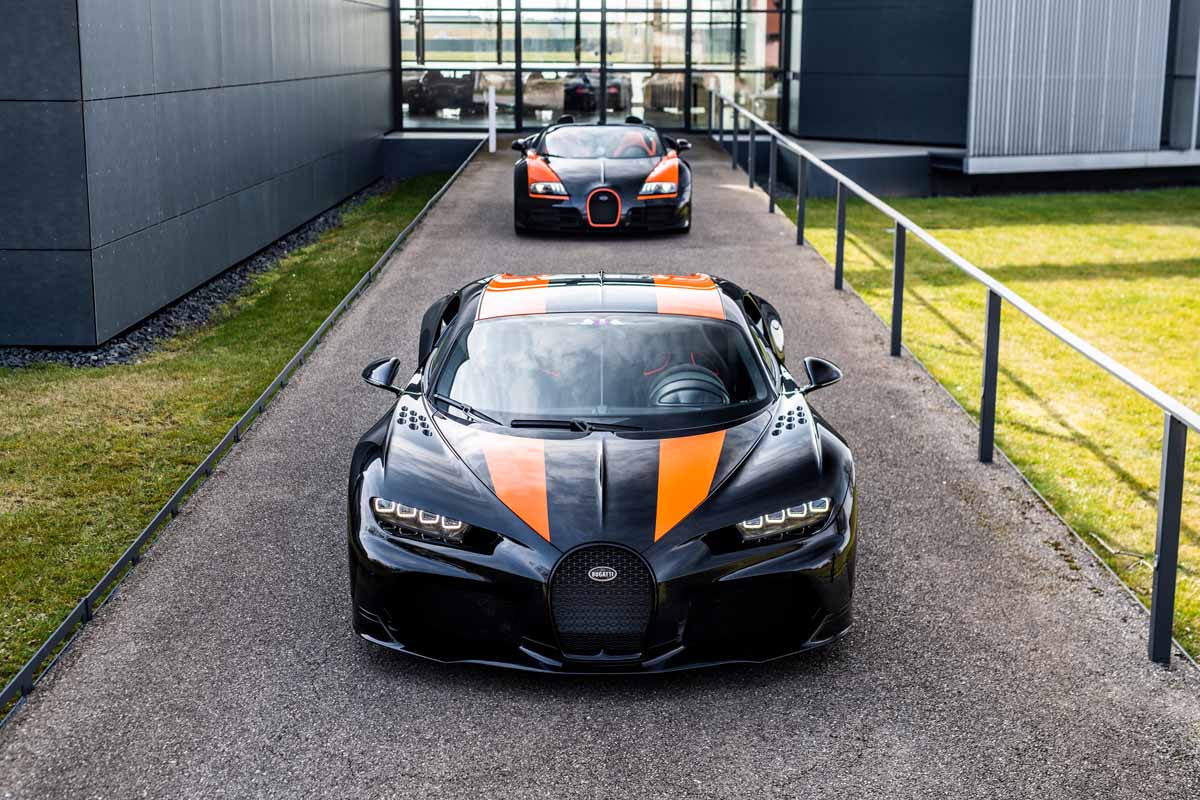