The Bugatti Chiron 4-005 – An Exceptional Prototype 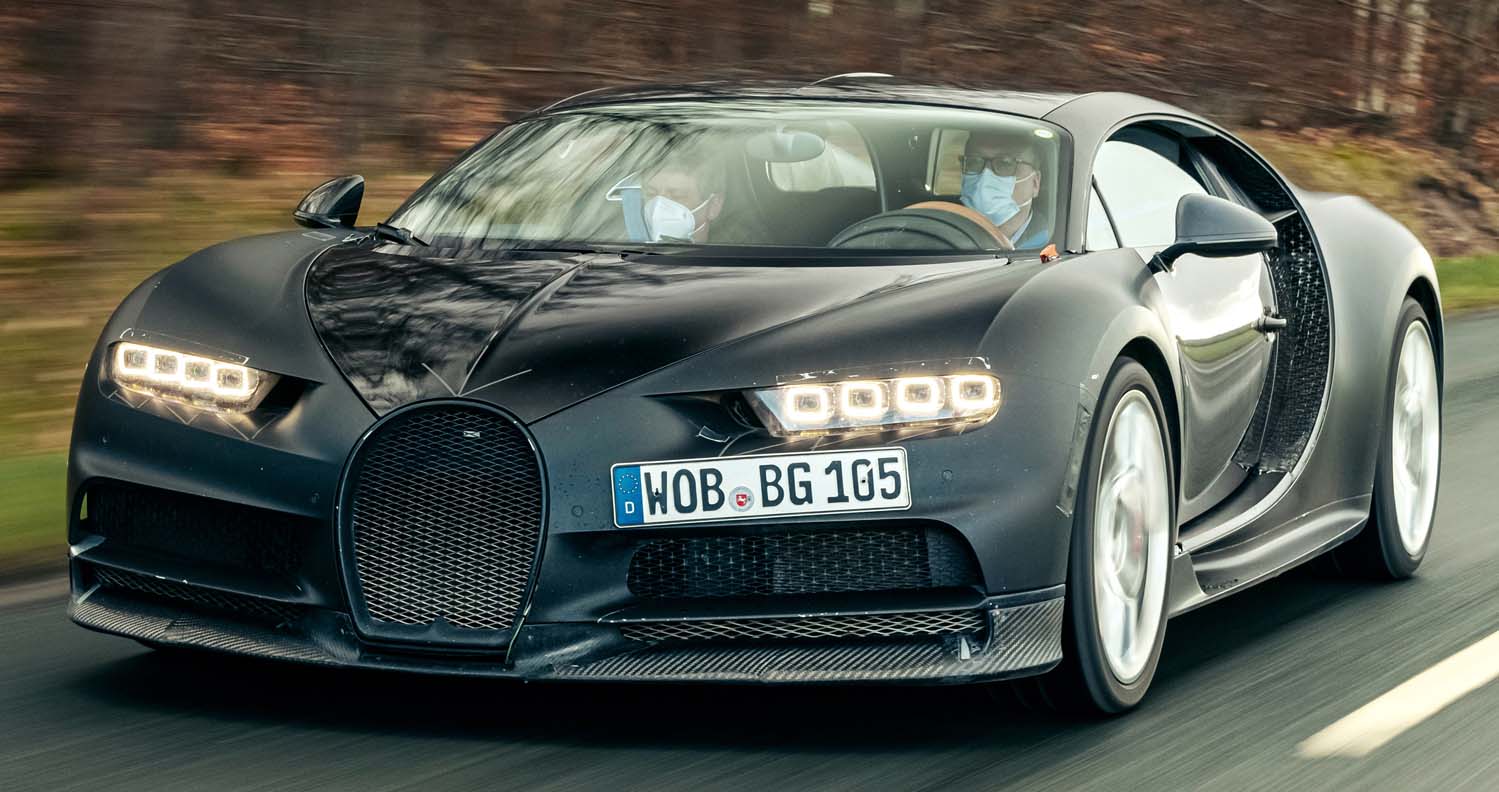 A matte surface, adhesive strips, scratches, and minor grazes bear witness to a tough life. This Bugatti Chiron was never spared. For more than eight years, this vehicle served as a piece of work equipment, a tool used to develop the Chiron to production maturity. And it served this purpose on multiple continents and in a variety of climate zones. The 4-005, as it is referred to internally, is the first Chiron to be driven in the USA, performs drifts in the snow in Scandinavia, completes laps on the high-speed ring in Nardò, passes heat tests in South Africa, and is subjected to the afterburner of a Eurofighter Typhoon. The hyper sports car serves the Electrics and Electronics development department as a test lab on wheels and in no way spared right to the end.

Test engineers tend to develop a prototype for a specific task then test their systems until shortly after the start of production, after which the vehicle is disposed of. But not so with the “Four five.” The four stands for “prototype” and the five stands for the fifth prototype of the Chiron. In all, eight prototypes were created, each built by hand and featuring many custom-made parts. Starting in 2013, all of the Chiron’s software is developed and tested in the 4-005. This involves some 30 vehicle control units undergoing a specific test procedure following a modification, first on the test bench and subsequently in the vehicle. When modifications are made, the engineers also monitor the condition and therefore the quality.

Rüdiger Warda has been developing Bugatti vehicles for almost 20 years and is responsible for the Chiron’s infotainment and audio system. “In the case of the 4-005, we performed all the tests and were on the road for many weeks, and this brings you together. The prototype shaped our work and with the prototype we shaped the Chiron,” he explains. 13 engineers, computer scientists, and physicists work with the vehicle and take care of it as if it were their own – even though it is “just” a work tool. Each developer deals with a specific component, but is also familiar with the properties of the system as a whole. In the case of the 4-005, the department installed the “welcome lighting,” in which the turn signal, headlamps, and rear lights light up in a specific order. People being welcomed with “Chiron” when they open the doors is also first developed for the prototype.

Test-drives across the USA

In the early days before the Chiron was launched in the market in 2016, it was protected from overly curious glances and the paparazzi by a tarpaulin. The team travels across the USA and half of Europe monitoring and fine-tuning the systems. Death Valley, the Grand Canyon, Granada, or the Großglockner – the maps and navigation system have to work impeccably in every country, as do the prototype’s satellite, aerial, radio, and phone reception. The experts monitor how the telemetric data behave when the car drives through different communication networks or without a network. During heat tests in the desert, they keep an eye on the air-conditioning system’s cooling flows, responsiveness, and noises. “There are many areas that can be simulated, but the final tuning is done on the road over many weeks,” explains Rüdiger Warda. The 4-005 also undergoes all the updates before it goes into series production. These include new navigation system functions and conference calling as well as HMI menu navigation based on a strict design specification – a minimalist interior without large displays should provide all the information, all of which can be controlled from the steering wheel.

“Developing a combination of a purely driving machine and comfortable, intuitive operation was challenging. With Bugatti, driving is part of the experience – the menu navigation should only support it,” says Rüdiger Warda. For map presentation, they therefore select a black background with blue symbols and white writing. When the speed key is activated, the infotainment system closes down completely. The driver doesn’t need any distractions when driving at 400 km/h, and needs to be able to concentrate fully on driving.

Mark Schröder has been developing the Chiron’s human-machine interface (HMI) since 2011, which includes the menu navigation. “We want to provide the driver with a lot of information and present this information logically and elegantly. It also needs to be intuitive to operate,” explains Schröder. To achieve a timeless, reduced, and elegant design, Bugatti opts for a centralized speed display with hi-res 6-inch displays alongside it. The four round control elements in the center console for the air conditioning feature a second display level. “We determined during test-drives that it was important for the front-seat passenger to receive vehicle information. We can present this information on the displays.” In addition, depending on the country configuration, the infotainment system can feature 30 menus within six main menus. As well as function, Bugatti pays attention to pleasant actuating points and precise power interpretation. The buttons, switches, and controls also have a very high-quality feel. All the controls are now balanced and require exactly the same torque when being adjusted as the controls on the steering wheel.

When Mark Schröder had difficulty reading the menu navigation writing during a test-drive in Arizona, USA, he came up with a solution right away – like the electronic paper display of an e-book reader, the display background now changes from black to white and the writing from white to black when signaled to do so by a sun sensor. “We discover many of the detail solutions during drives, discuss them within the team, and then realize them, starting with the 4-005,” explains Mark Schröder. Even the font and font size and the arrangement of the menus or additional items are reviewed again and again during test-drives. Full sound tuning is likewise first performed in the 4-005. Hi-fi experts spend days experimenting with different sounds and pieces of music to achieve perfect sound, ultimately opting for four tweeters with a 1-karat diamond membrane, two bass-midrange speakers, and two subwoofers. They attach great importance not only to the sound of the music, but also to phone call rendition – based on various interior materials.

Every drive is special

Even though it is a piece of work equipment, every drive in the Chiron is special. “In spite of it being an immense feat, we drove for up to ten hours at a time – and got out of the car feeling fit in the evenings,” says Norbert Uffmann, who is responsible for telemetry and connectivity at Bugatti. They have positive memories of the many wonderful moments with the vehicle as well as the reactions of other road users – regardless of whether they were car drivers, cyclists, or pedestrians, the Chiron triggers joy and excitement. Even stern US police officers took interest in the hyper sports car, asked questions, and posed for photos. The engineers update the hard- and software a number of times and keep the prototype at the cutting edge of technology at all times. This also involves their checking the quality and functionality of components which are otherwise not touched during a car’s lifetime, like connectors and control units. The result – even after eight years and mileage of more than 74,000 kilometers, notably in tough conditions, the vehicle electronics are still essentially wear-free. The prototype is now going into its well-earned retirement after all that hard work. 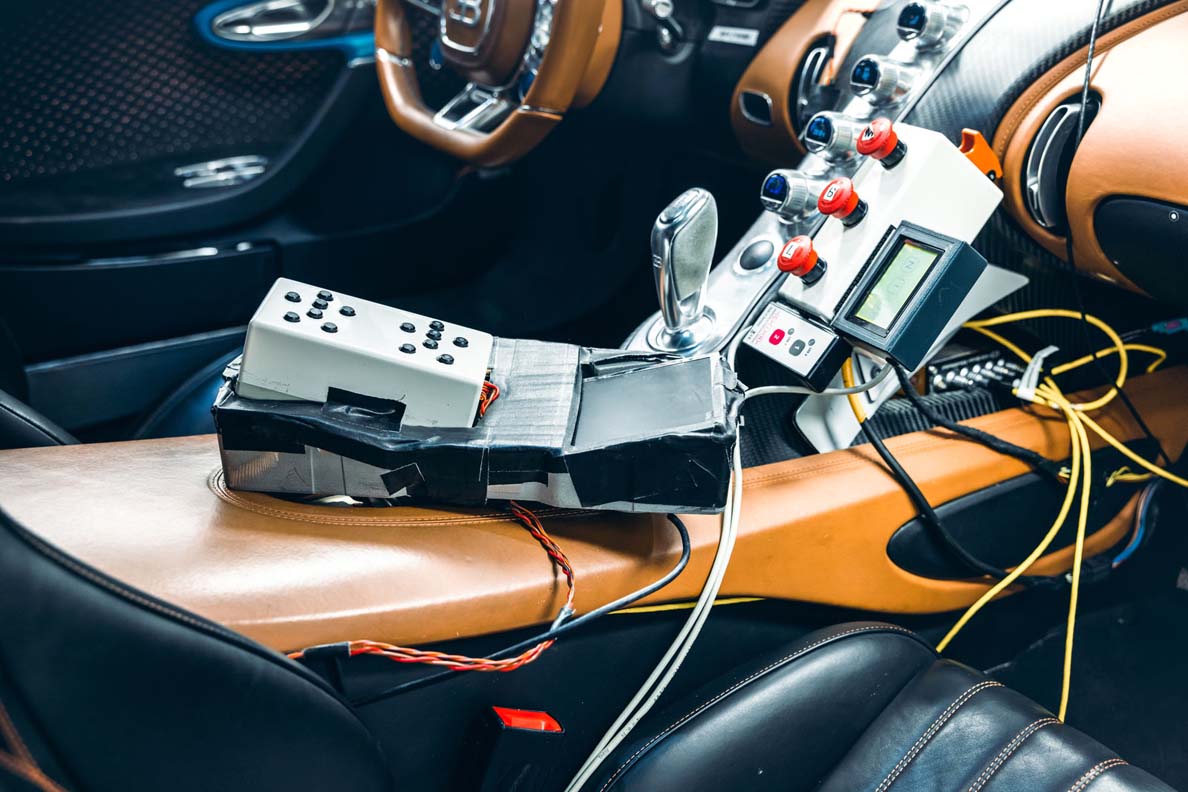 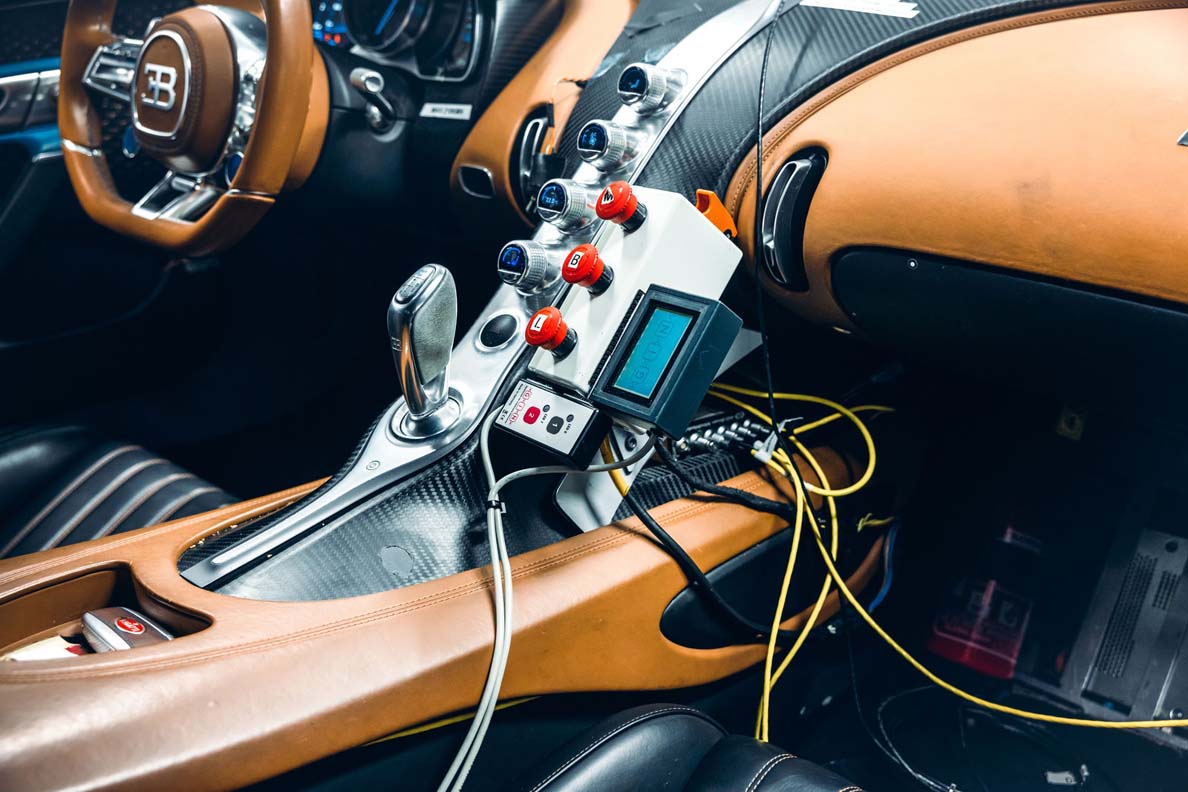 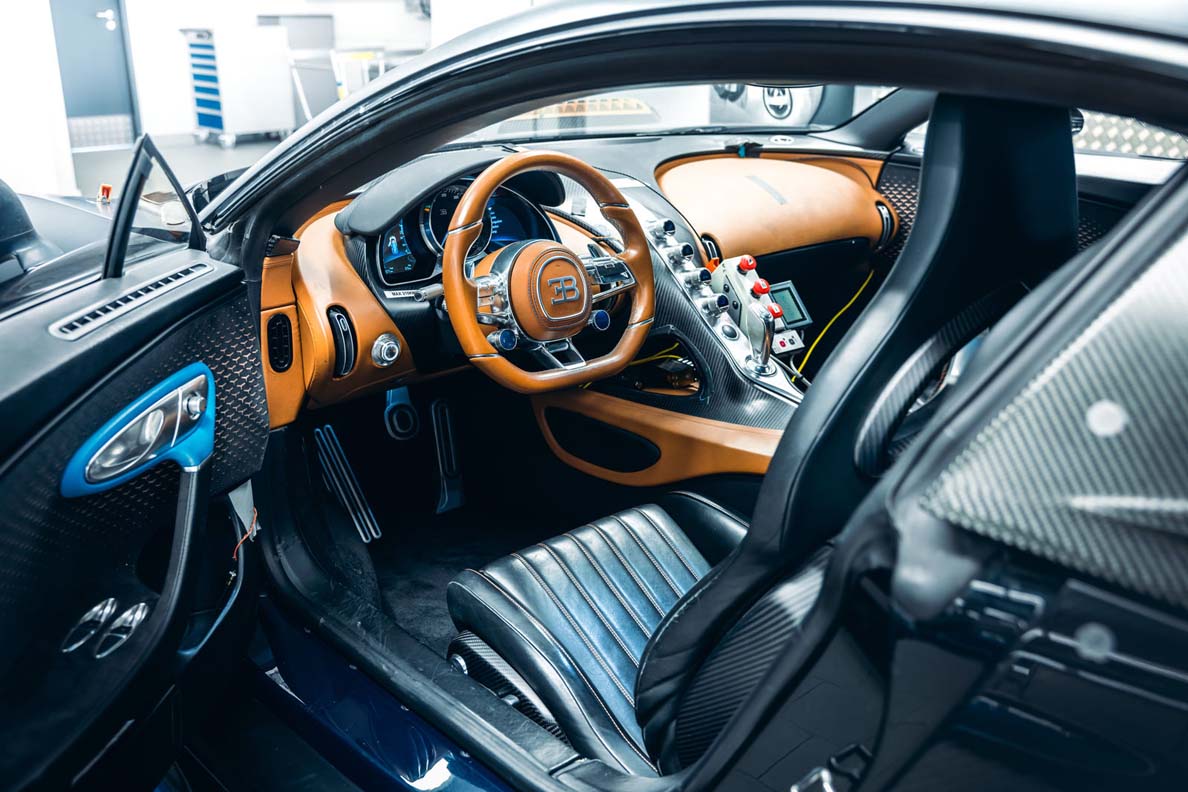 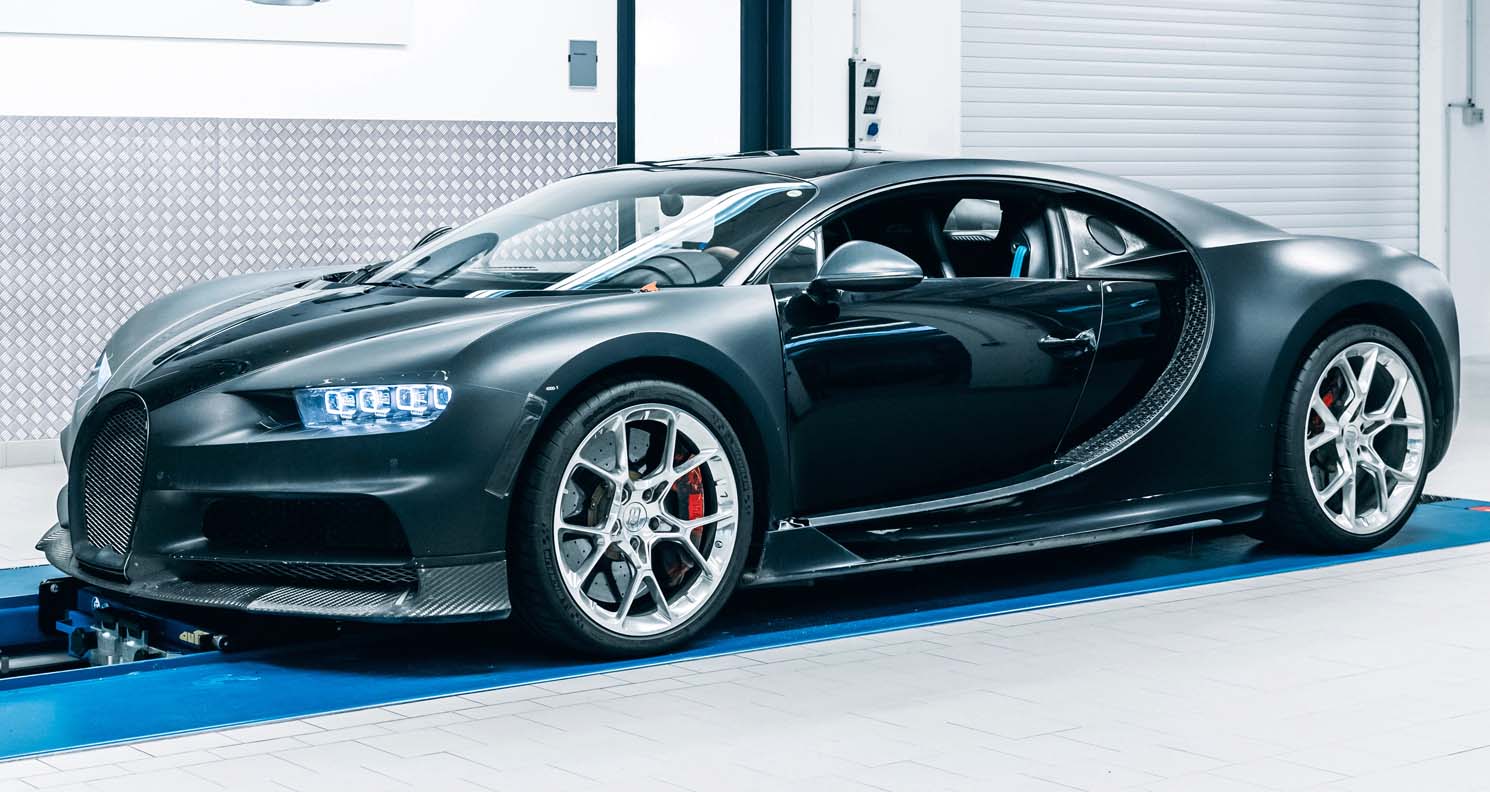 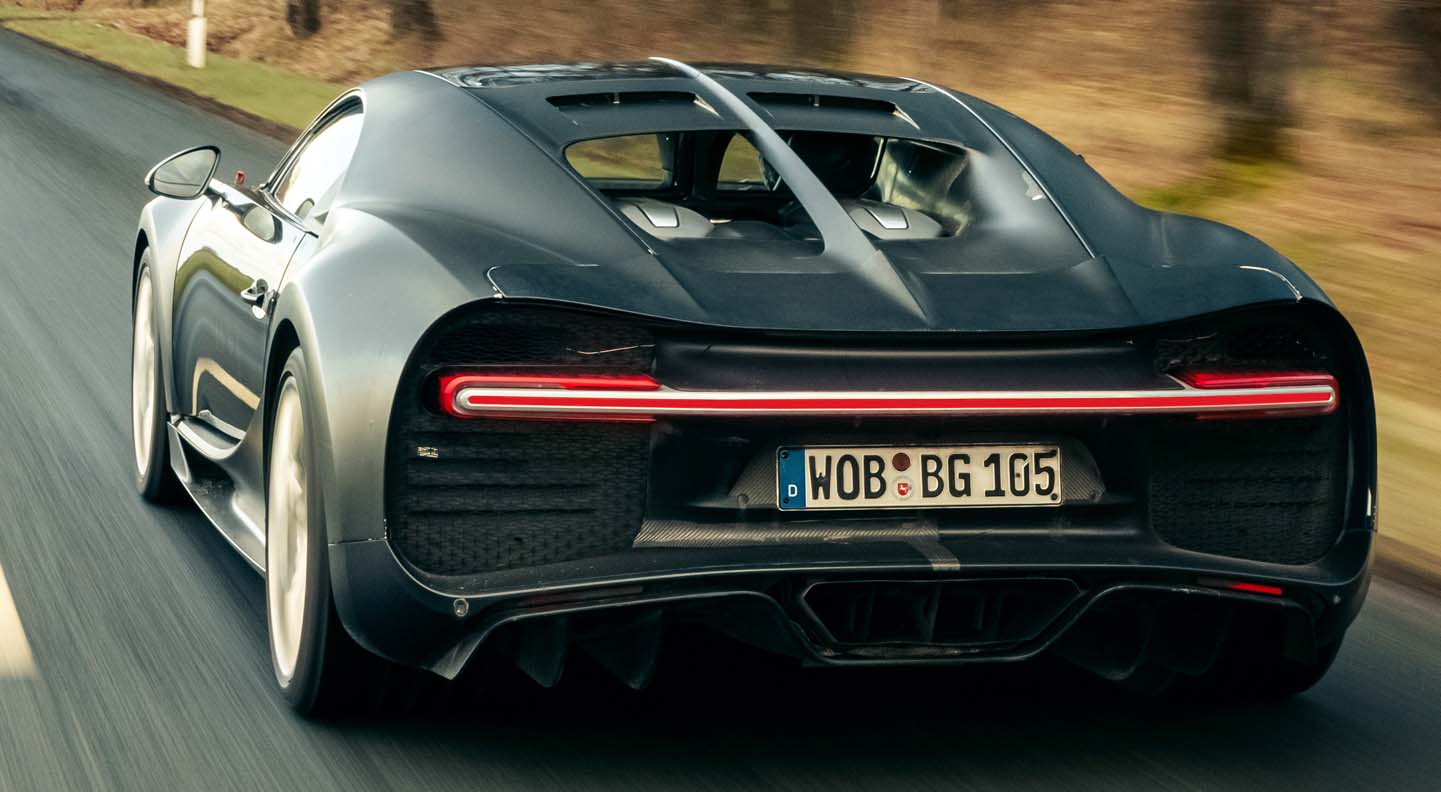 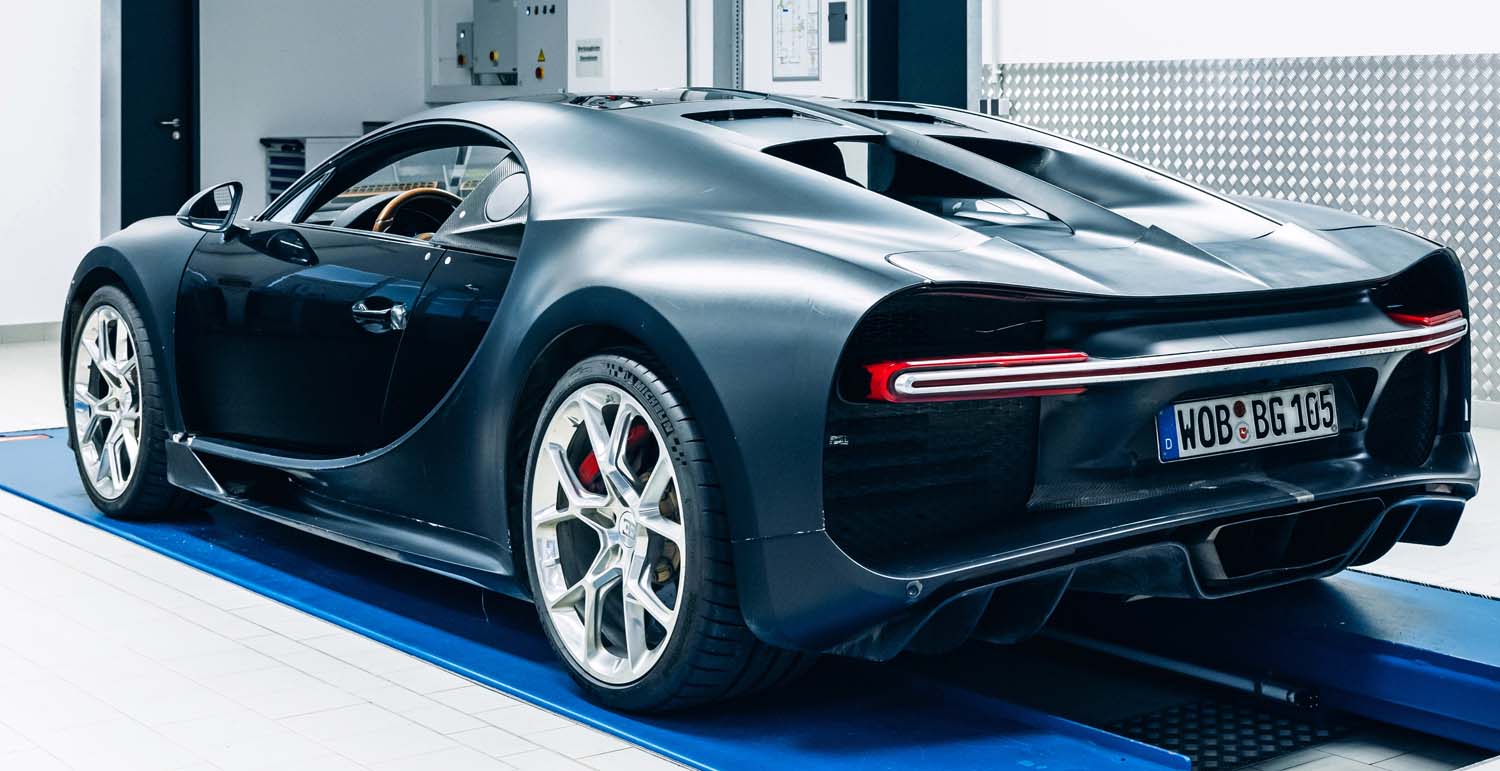 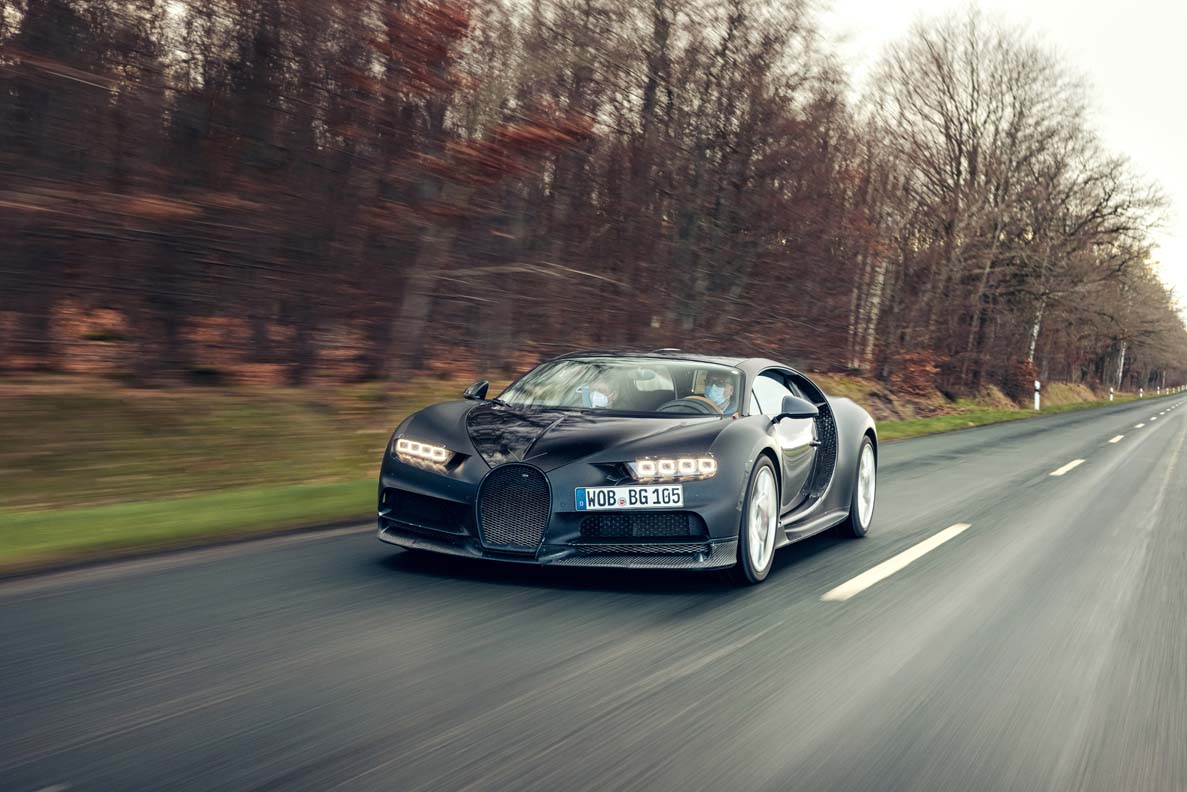 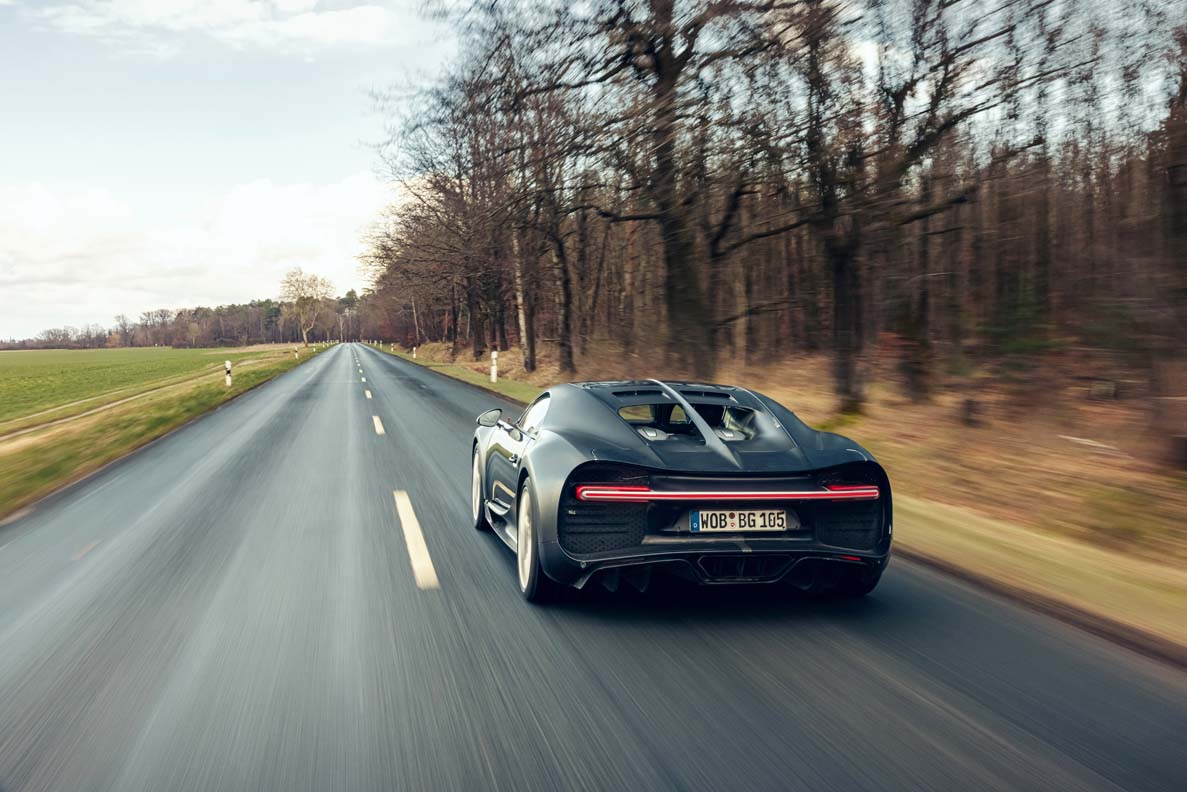 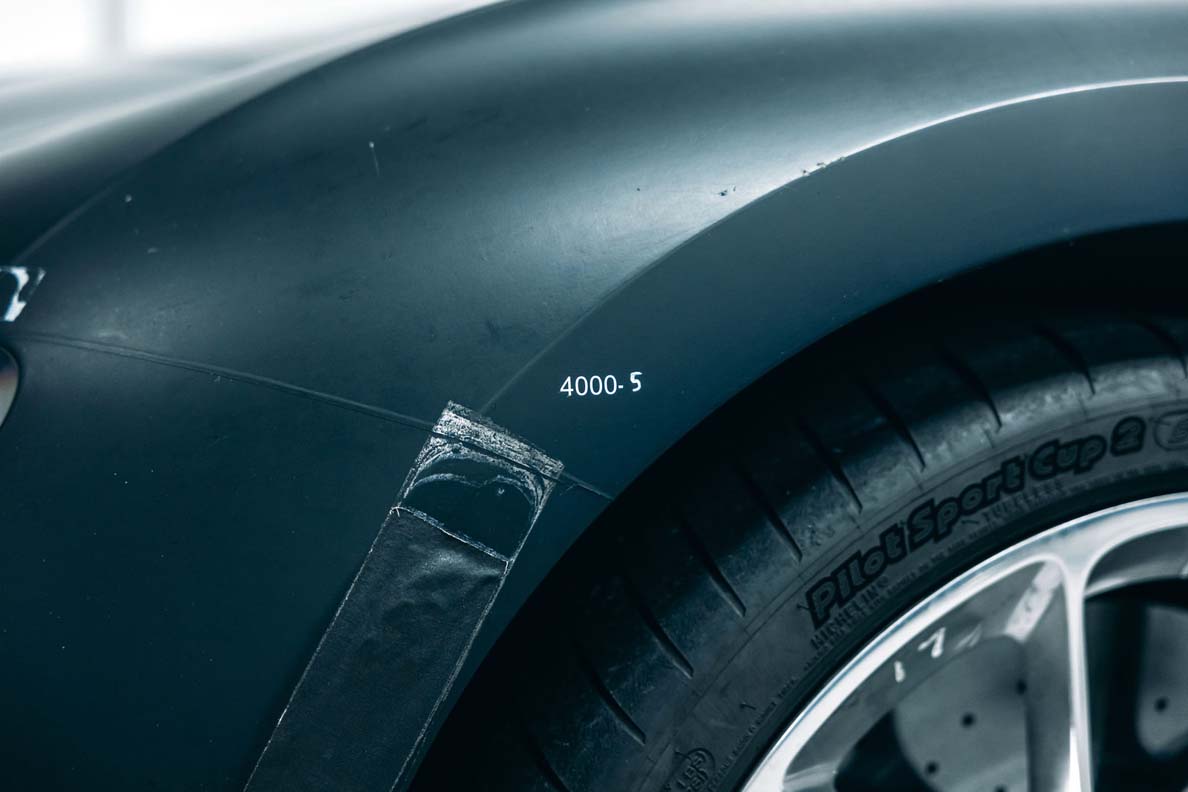 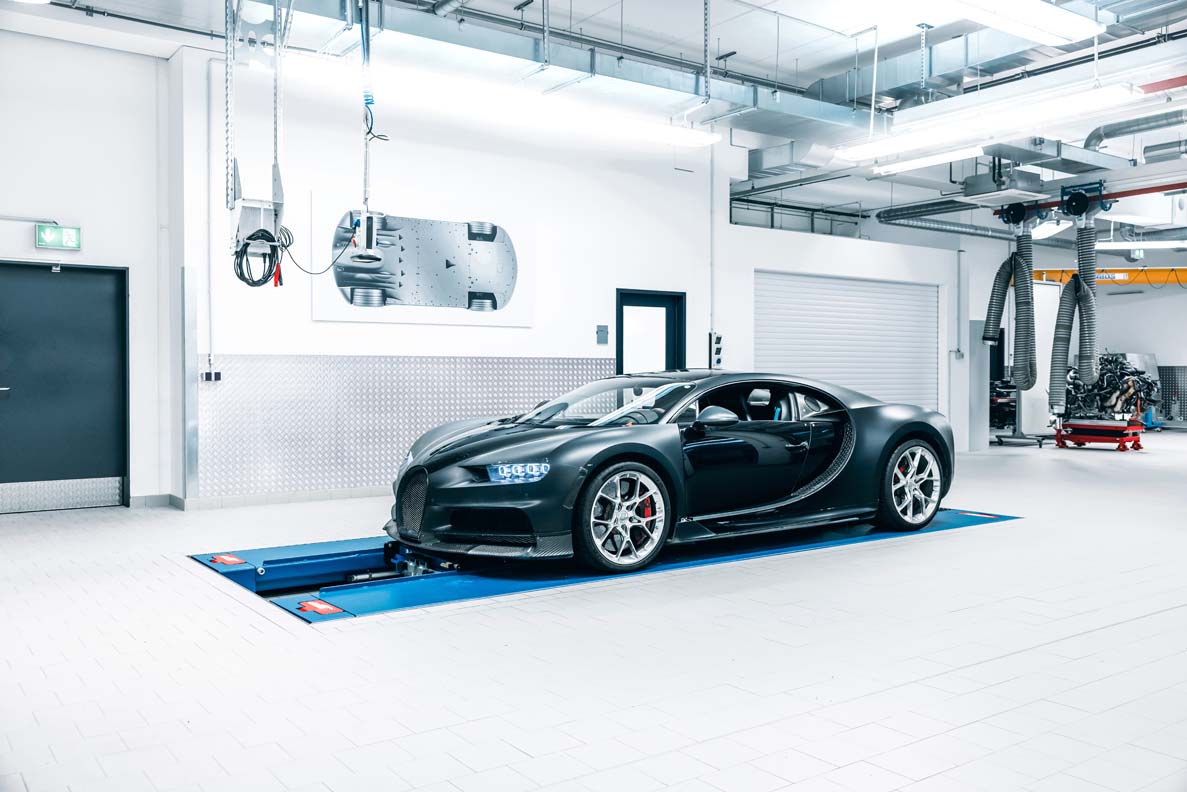 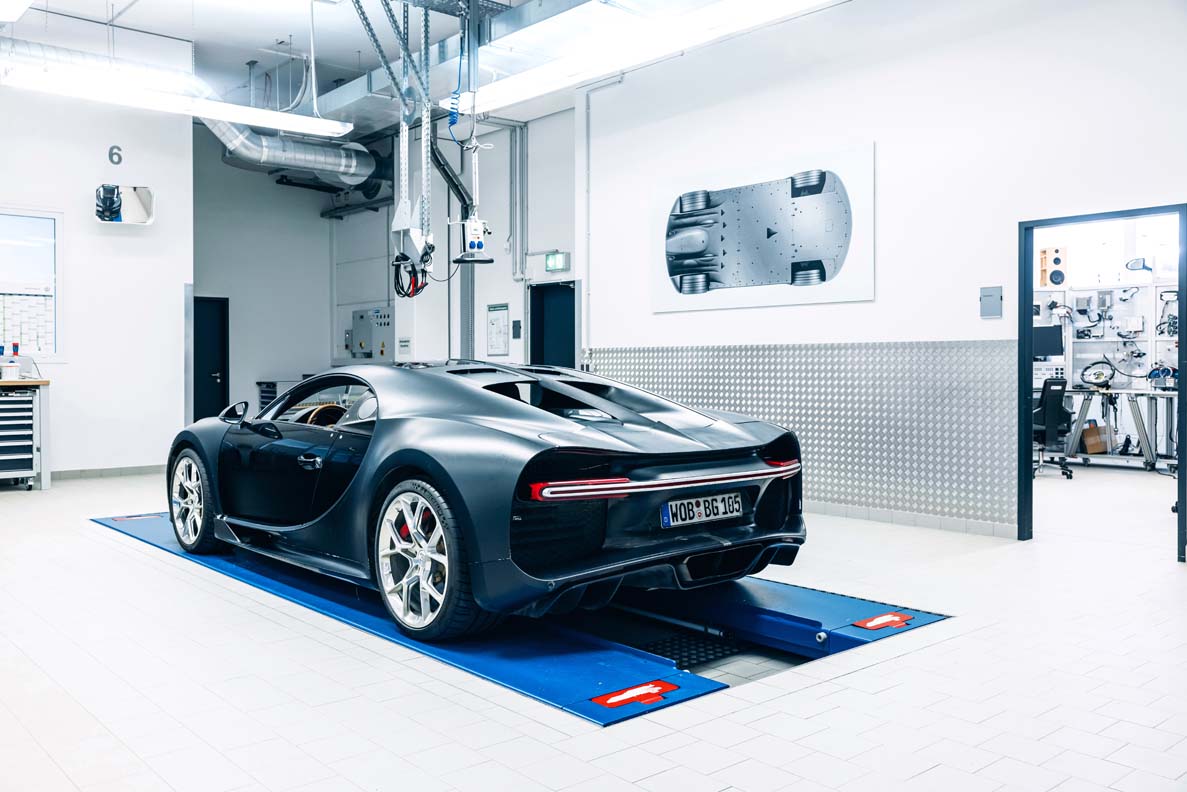 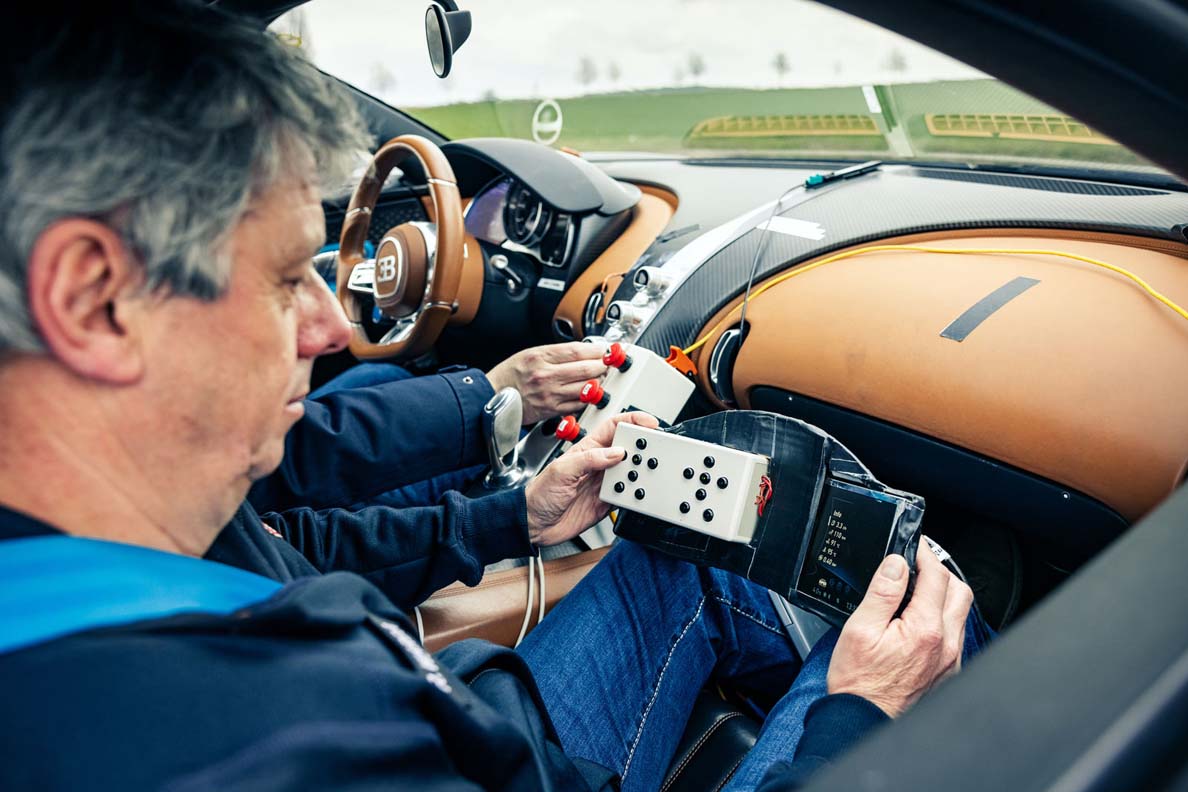 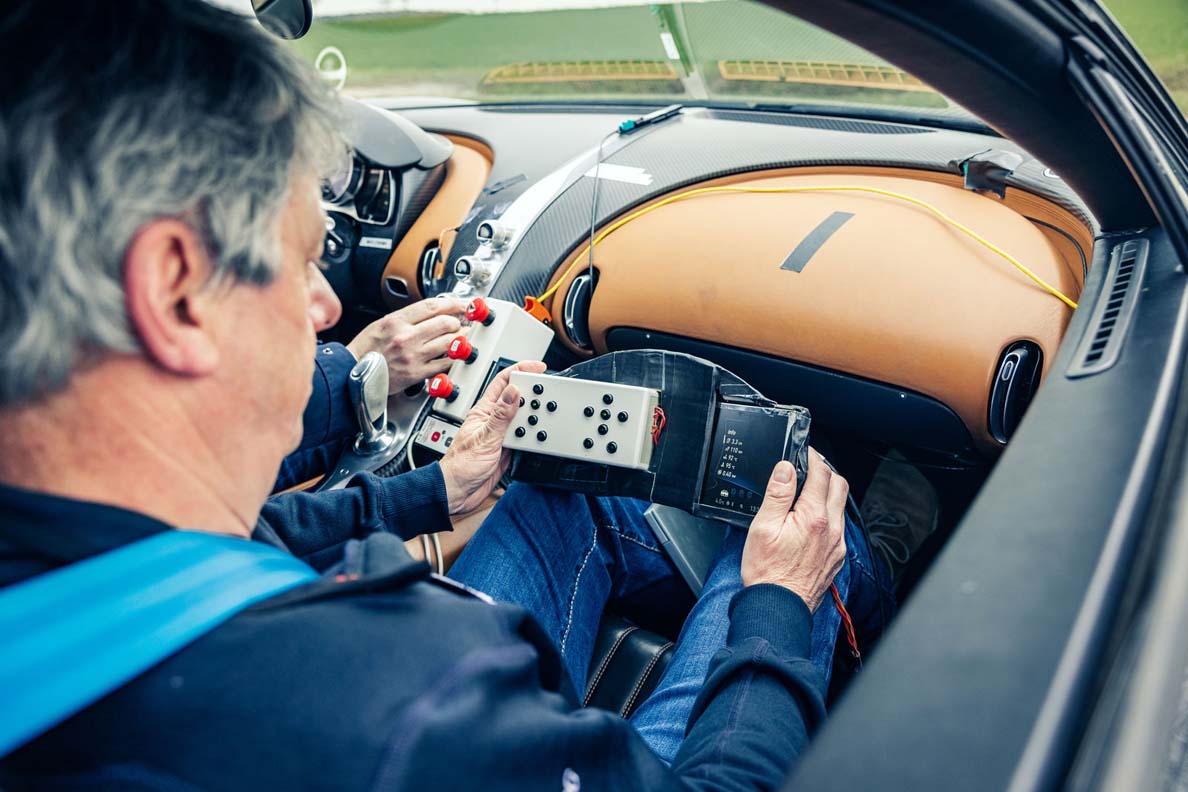