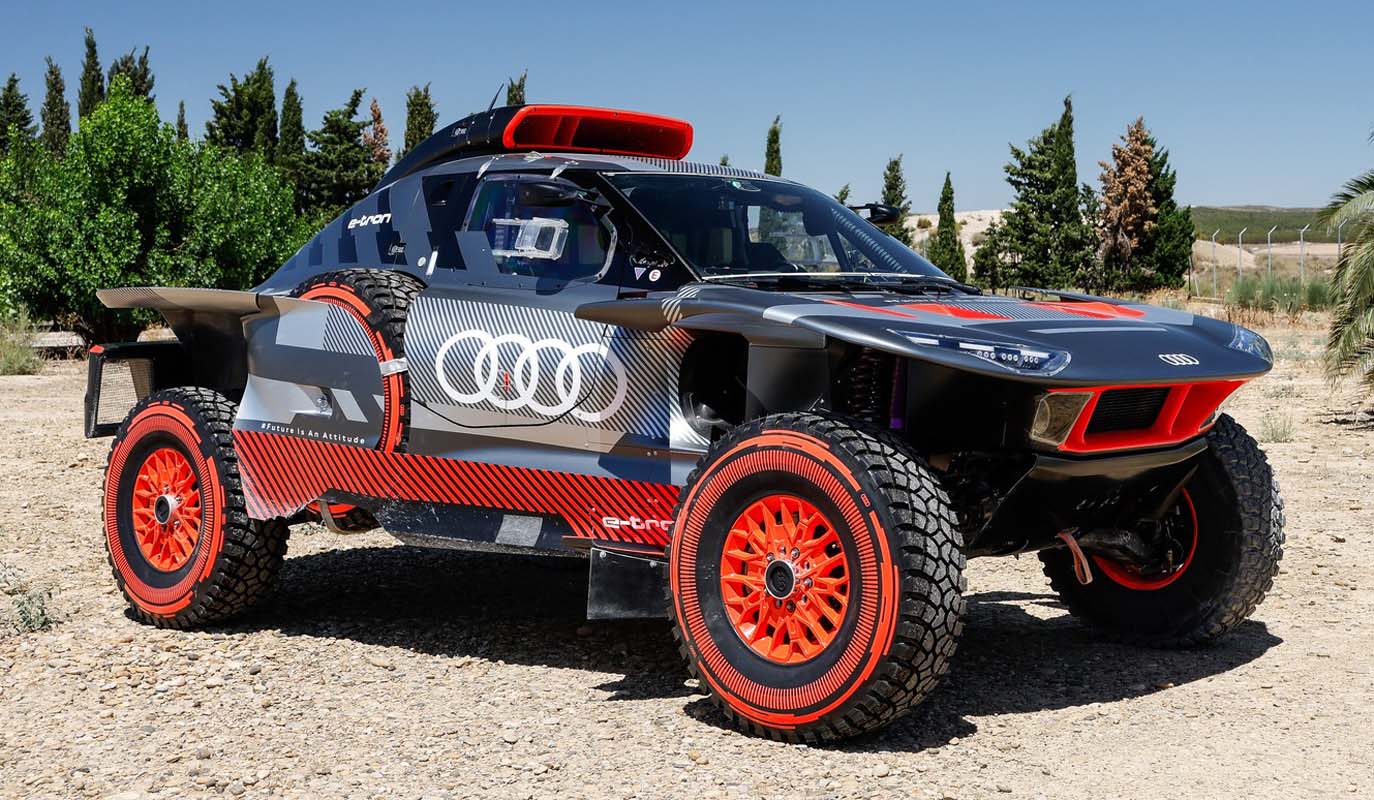 In March 2022, the Audi RS Q e-tron won its first desert rally in Abu Dhabi, and now the next evolution is ready. The innovative prototype presents itself significantly improved for the 2022 Morocco Rally and the 2023 Dakar Rally. The body is completely new and features significantly enhanced aerodynamics. It helps lower the prototype’s weight and center of gravity. New operating strategies further improve the efficiency of the electric drivetrain. In the interior and when changing wheels, the driver and co-driver benefit from easier operation. Following these evolutions, the RS Q e-tron now bears the abbreviation E2. It is reminiscent of the legendary Audi Sport quattro in its final development stage for Group B rallying in the 1980s.

Second phase of the development program

“We’ve managed a good debut at the Dakar with the Audi RS Q e-tron and even our first stage victories in a motorsport discipline that is new to us,” says Rolf Michl, Managing Director of Audi Sport GmbH and responsible for motorsport at Audi. “The entire team is working excellently together and pulling in the same direction. As is usual at such an early stage, the drivers, co-drivers and technicians quickly agreed on the next development targets. We have summarized the result in a new evolution package – the RS Q e-tron E2.” This marks the beginning of the second phase of the development program. In October, Team Audi Sport will prepare for the 2023 Dakar Rally with the new prototype in Morocco.

Gentle in the air, light in the sand: the new body

“The Audi RS Q e-tron E2 does not adopt a single body part from its predecessor,” says Axel Löffler, Chief Designer of the RS Q e-tron. In order to comply with the prescribed interior dimensions, the cockpit, which was previously narrowly recessed towards the roof, is now significantly wider. The front and rear hoods have also been redesigned. “We are now doing away with the underflow of the rear hood to the left and right of the B-pillars. In conjunction with modified lay-ups, i.e. optimized fabric layers of the composite materials, this solution reduces weight,” says Löffler. The T1U prototypes will have to weigh 2,100 instead of 2,000 kilograms in the future. Given that the first generation of the RS Q e-tron was overweight, it was still necessary to save several dozen kilograms. This is accompanied by the lowering of the vehicle’s center of gravity. 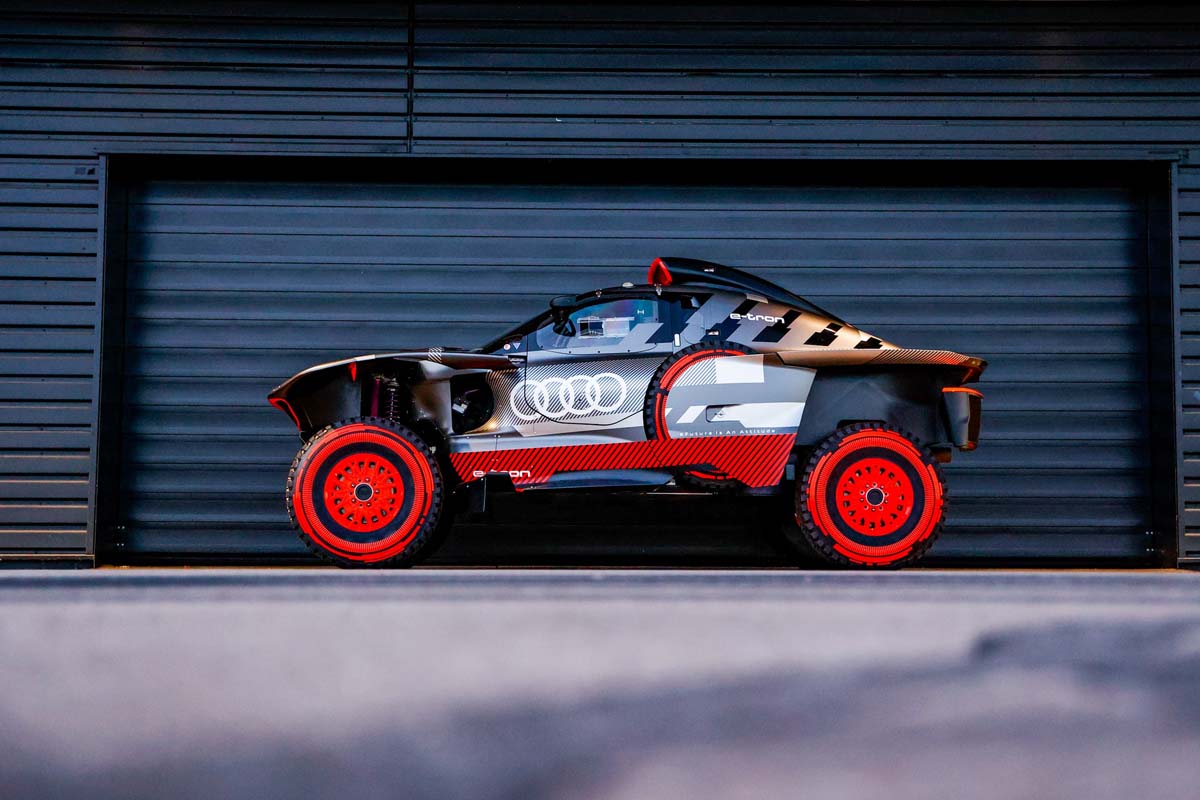 The aerodynamic concept in the area of the body below the hoods is completely new. This section is almost reminiscent of the shape of a boat’s hull: its widest point is at the of the cockpit, while the body tapers significantly towards the front and rear. Audi has now dispensed with the part of the fenders that was behind the front wheels and formed the transition to the door. Internally, this structure was called the “elephant foot.” As a result, the designers saved more weight and optimized the air flow. “The aerodynamic aspect should not be underestimated in desert rallying either,” says Löffler. Admittedly, the new cockpit dimensions mean that the body has a larger and therefore less favorable cross-section. Nevertheless, it was possible to reduce the overall aerodynamic drag by around 15 percent, i.e. the product of the CD value and the frontal area (A). This does not change the top speed. It remains limited to 170 km/h in the regulations. Nevertheless, the improved air flow offers one major advantage. “It further reduces the energy requirements of the electrically powered car,” says Löffler. “We implemented the aerodynamic calculations entirely using computational fluid dynamics (CFD).” These computer simulations replace the time-consuming work in the wind tunnel and still deliver highly precise results.

The electric drivetrain of the Audi RS Q e-tron E2 comprises an energy converter consisting of an internal combustion engine and a generator, as well as a high-voltage battery and the two electric motors on the front and rear axles. Energy management plays a crucial role here. The electronic control system of the complex electric drivetrain proved its worth in the first rally events. Challenges only arose in extreme cases. At the Dakar Rally, for example, Audi noted short-term surpluses of power in situations where the wheels made less contact with the ground while jumping or on uneven terrain. The officials of the FIA, the world automobile federation, intervene at a threshold of 2 kilojoules of excess energy and impose sporting penalties. “By way of comparison, more than one hundred times the amount of energy flows to the motors per second within the permissible limits,” says Florian Semlinger, development engineer for embedded software, application and test bench. “We could have made it easy on ourselves and set our threshold several kilowatts lower, but that would have meant performance disadvantages. Instead, we put a lot of fine-tuning into the power controllers.” Two individual limits – one for each motor – are now recalculated by the software within milliseconds. As a result, it operates precisely along the permissible limit.

The so-called auxiliary consumers also benefit from optimized control. The servo pump, the air-conditioning cooling pump and the fans have a measurable impact on the energy balance. In the course of the debut season in 2022, the Audi and Q Motorsport rally team gained valuable experience that enables better assessment. Take the air-conditioning system, for example: It works so aggressively that it could cause the coolant to freeze when constantly running at its maximum output. In the future, the system will run in an intermittent mode. This saves energy, yet the interior temperatures only fluctuate slightly, even over longer periods. The operating strategy for the fans and the servo pump has also been optimized. For example, the systems can now be regulated differently for the lower loads on the liaison stages than on the special stages.

Simplified operation: Ease of use in the cockpit and when changing wheels

The Audi drivers Mattias Ekström/Emil Bergkvist, Stéphane Peterhansel/Edouard Boulanger and Carlos Sainz/Lucas Cruz can look forward to their new workplaces. The displays are still in the driver’s field of view and located in the center console in the usual style, and the central switch panel with its 24 fields has also been retained. However, the engineers have restructured the displays and controls. “The totality of all the functions quickly creates confusion,” says Florian Semlinger. “That’s why, for the first time, the driver and co-driver can now select from four system areas using a rotary switch.” The “Stage” theme contains all the functions that are important while driving competitively – such as the speed limiter in sections with speed limits or the air jack. The “Road” part contains, for example, turn signals and the rear-view camera, functions that are often in demand on the liaison stages. The “Error” option is used to detect, categorize and catalog errors. The “Settings” section includes everything that is useful for the engineering team during testing or after the car arrives at the bivouac, for example, detailed temperatures of individual systems.

Crews can now work much more easily after a puncture. Simple, flat and easily removable body components replace the previous bulky covers for the spare wheels in the flanks. The new ten-spoke rims from partner Rotiform are much easier to handle. Drivers and co-drivers can grip them more easily and complete the change more safely.

“We have combined all the important lessons in a very short time. The result of our ideas is the E2 evolution,” says Uwe Breuling, Head of Vehicle Operations Audi Sport. “Our development team’s determined and cost-efficient work has prepared us perfectly for our second Dakar Rally.”

Following initial testing led by Arnau Niubó Bosch, Head of Test Engineering, Audi Sport unveiled the RS Q e-tron E2 in Neuburg an der Donau on September 1. From October 1 to 6, the new technology will have to prove itself in competition for the first time at the Rally du Maroc. All three Audi driver pairings will then contest the desert rally that begins and finishes in Agadir, in the southwest of the North African country. 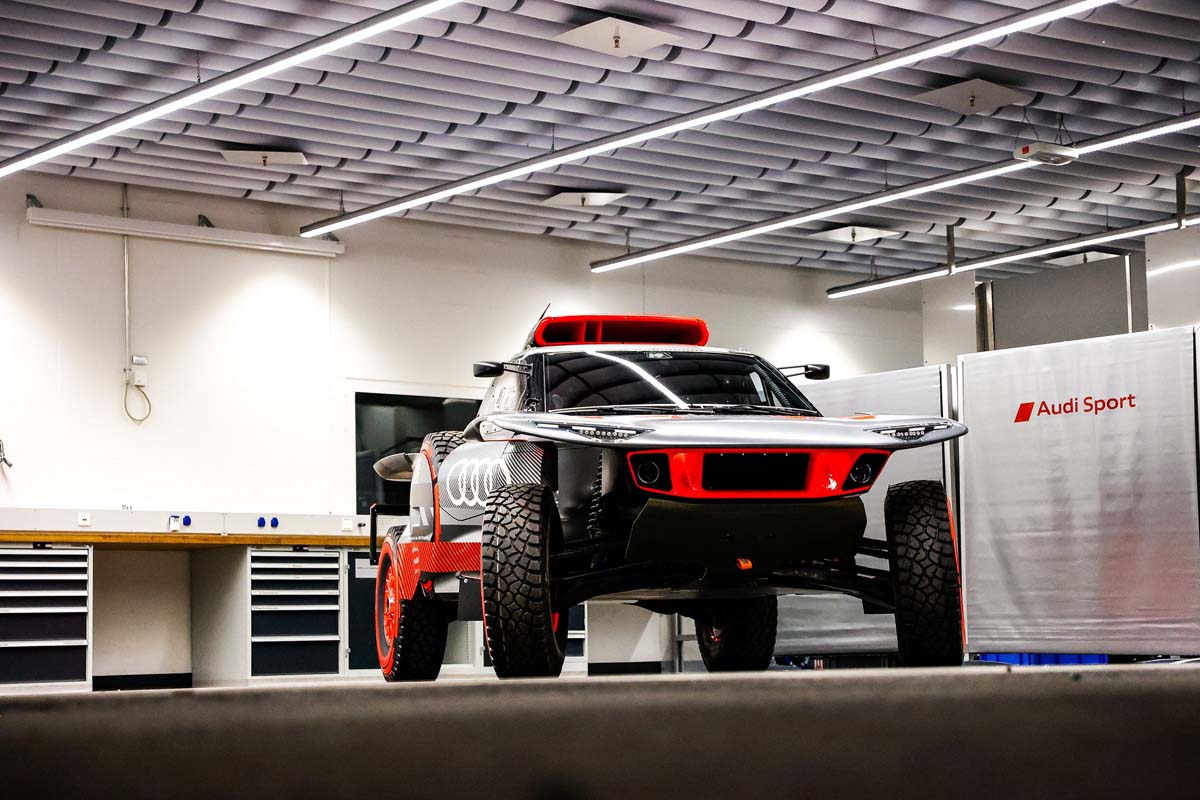 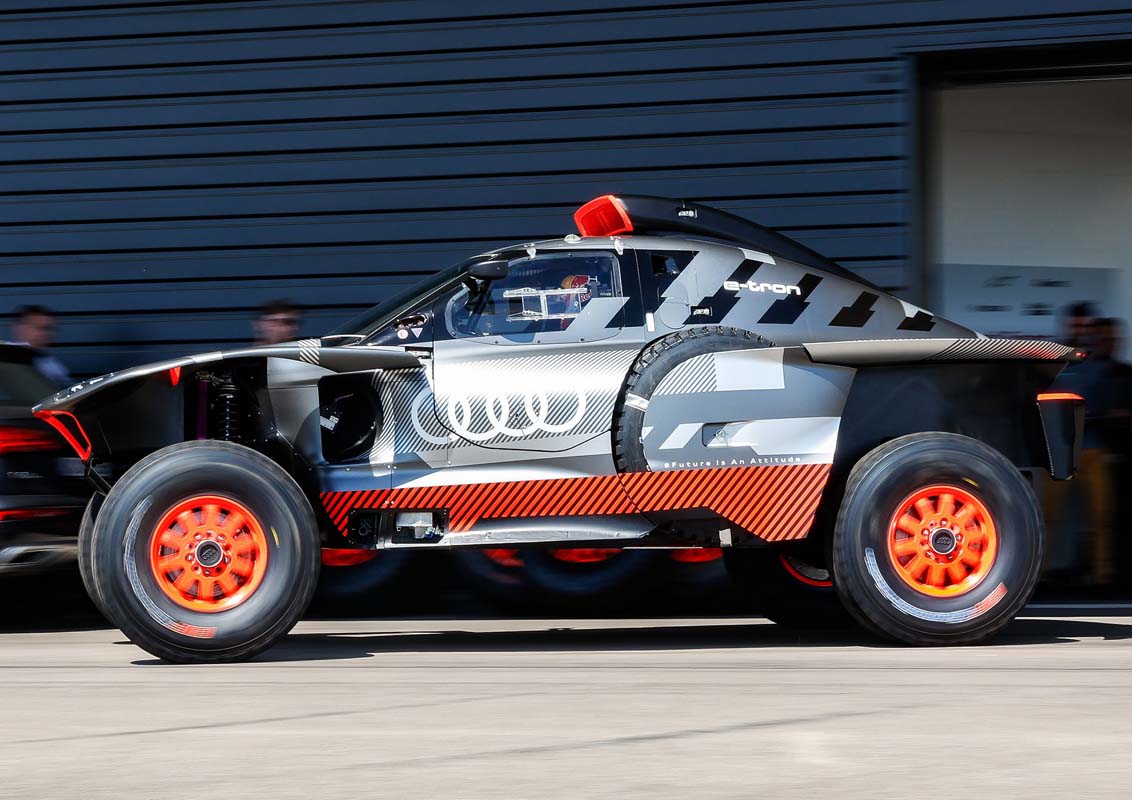 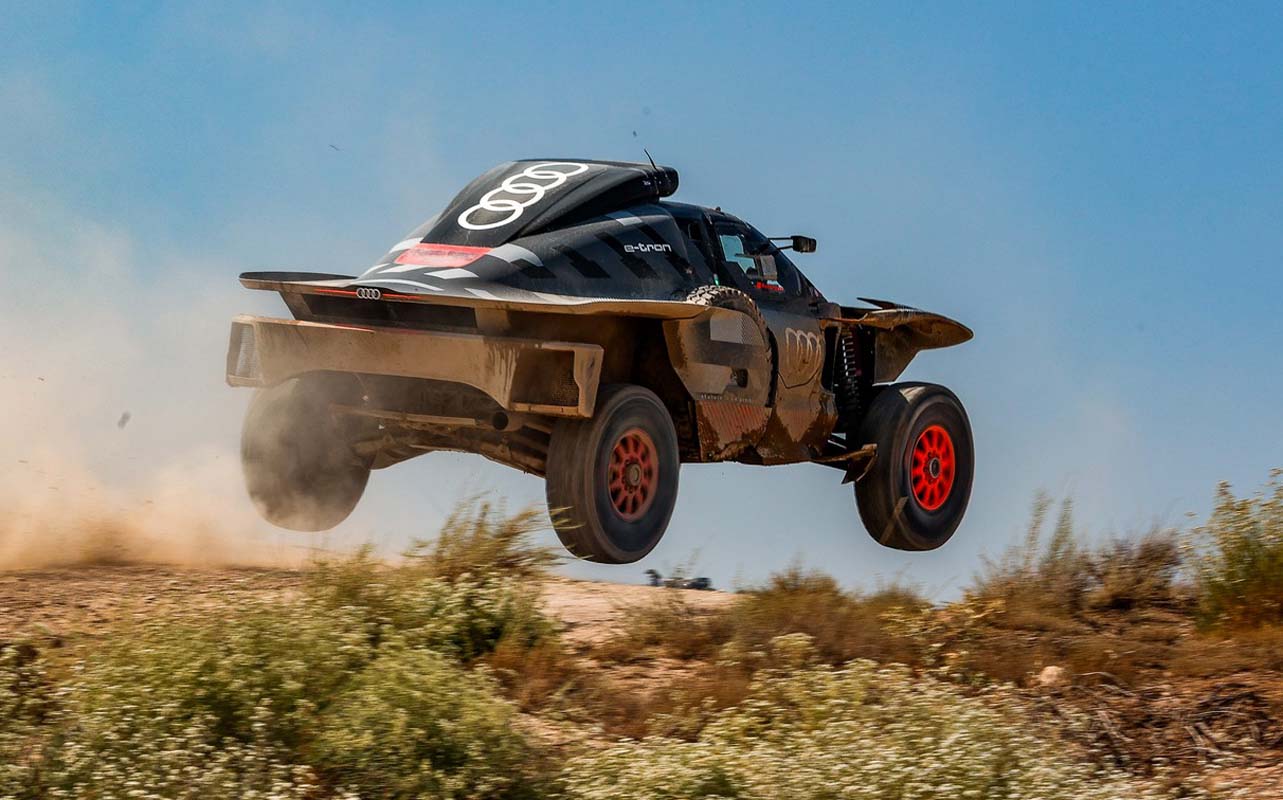 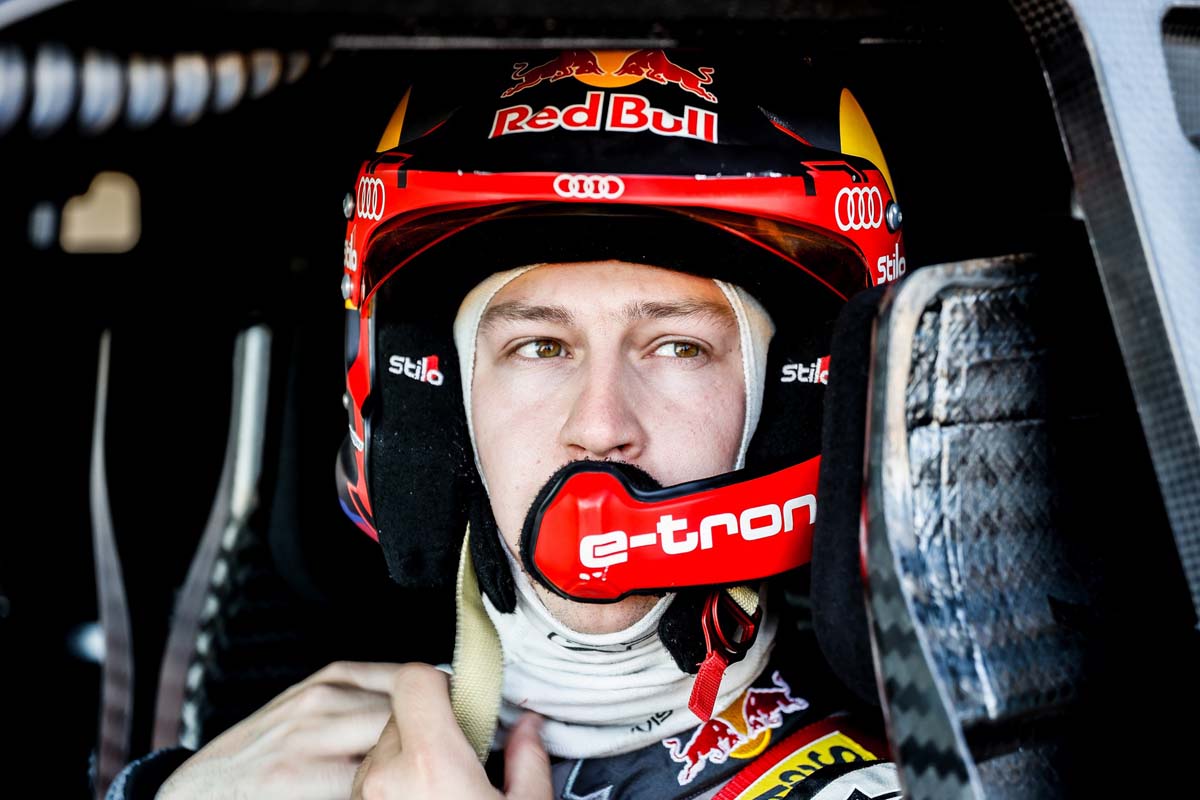 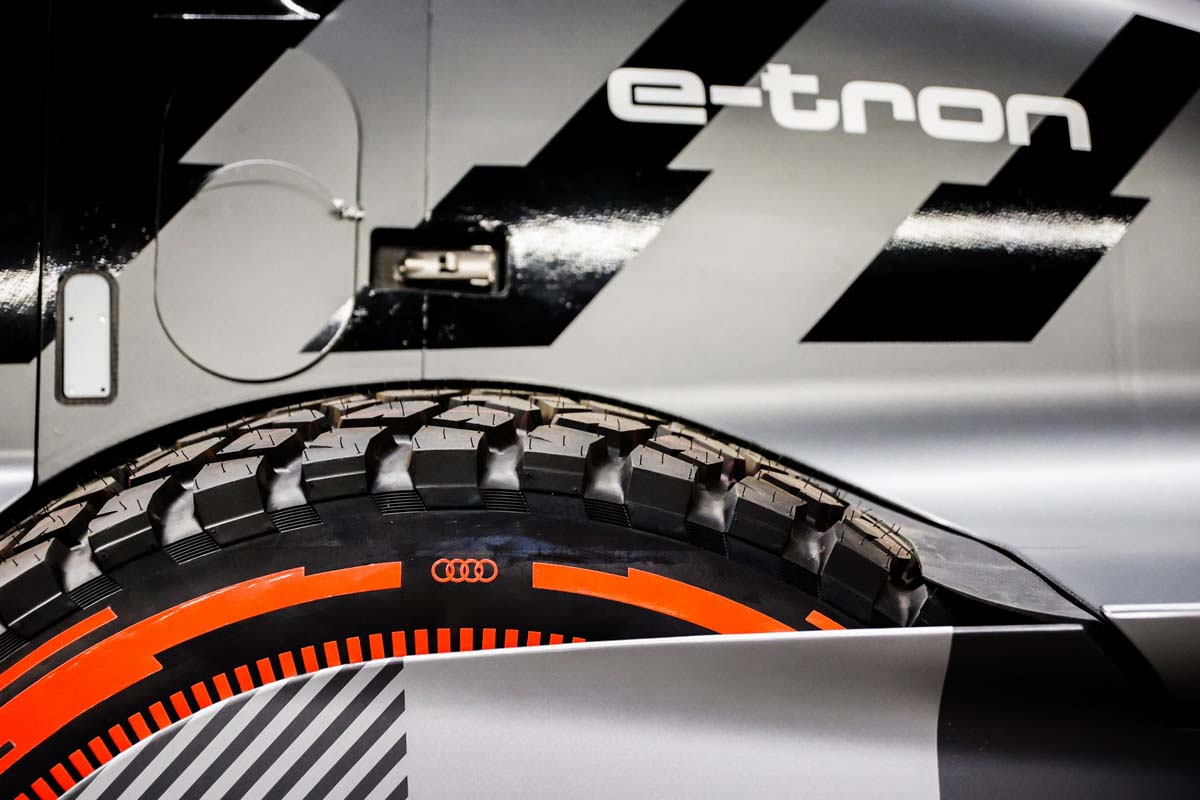 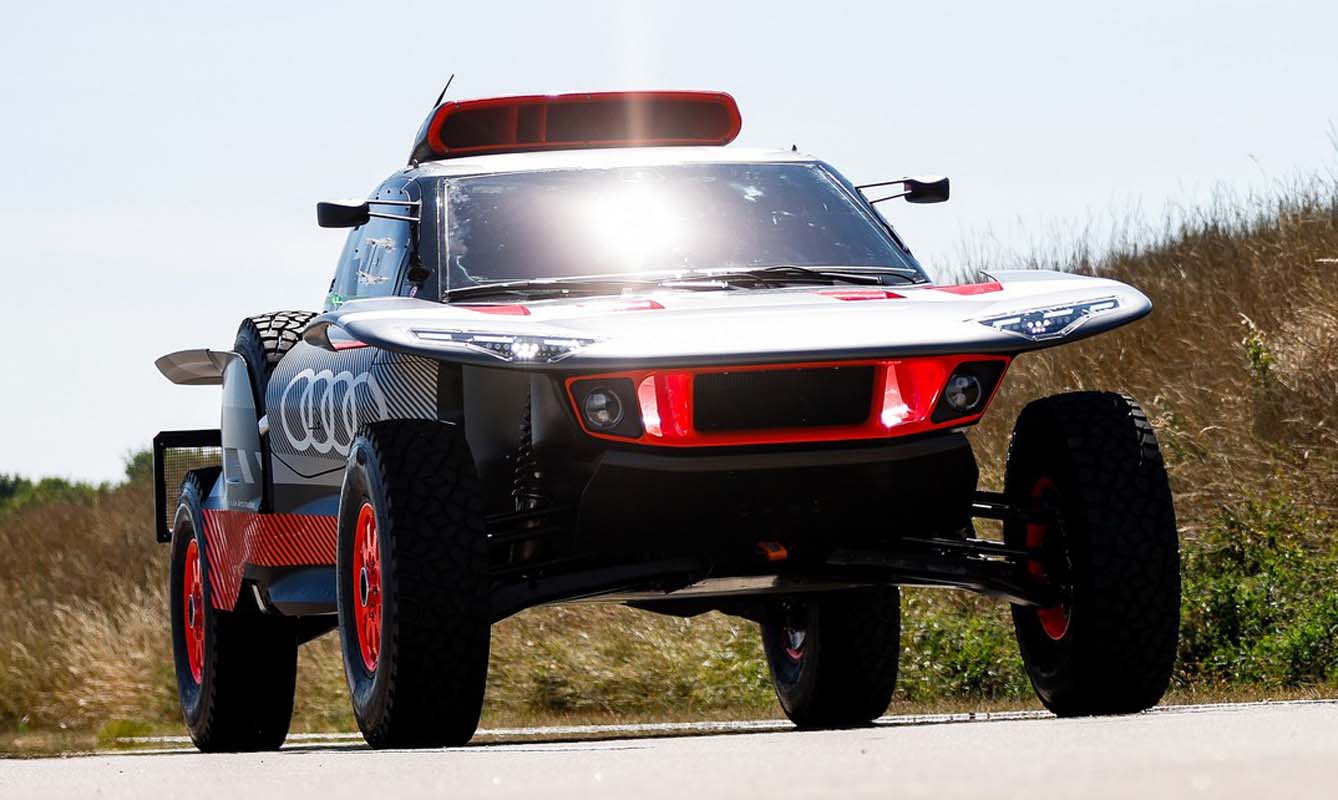 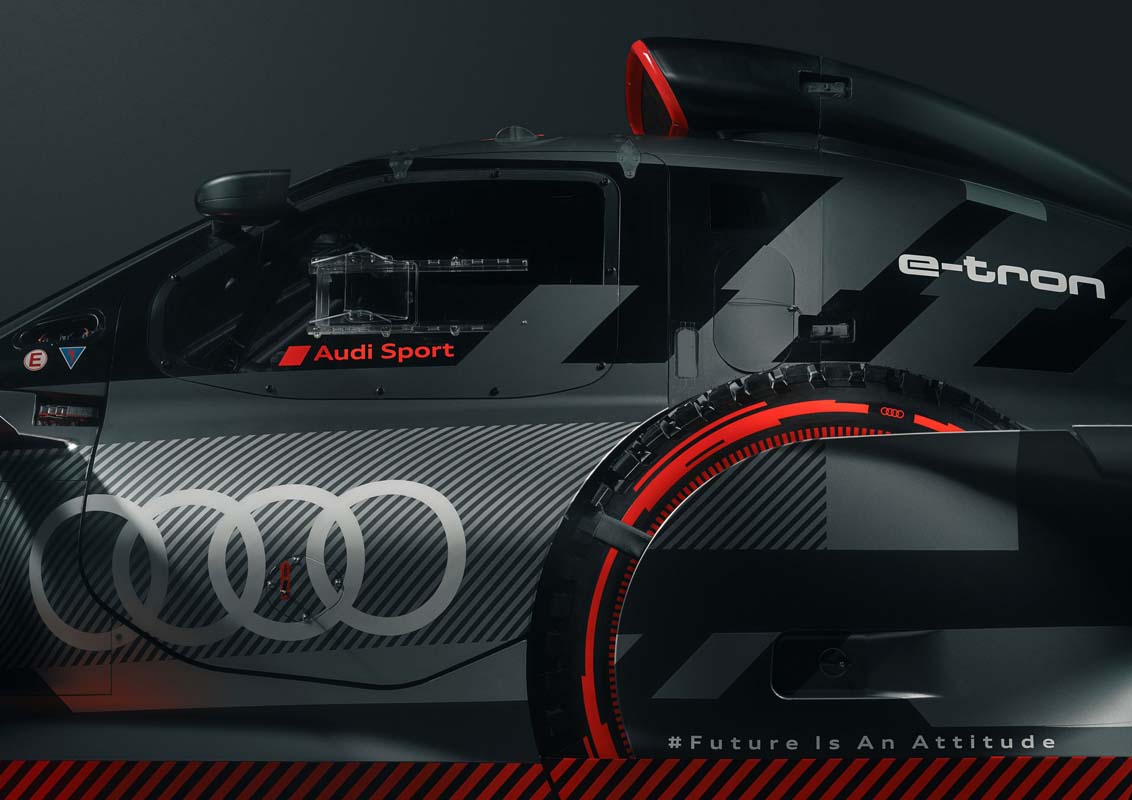 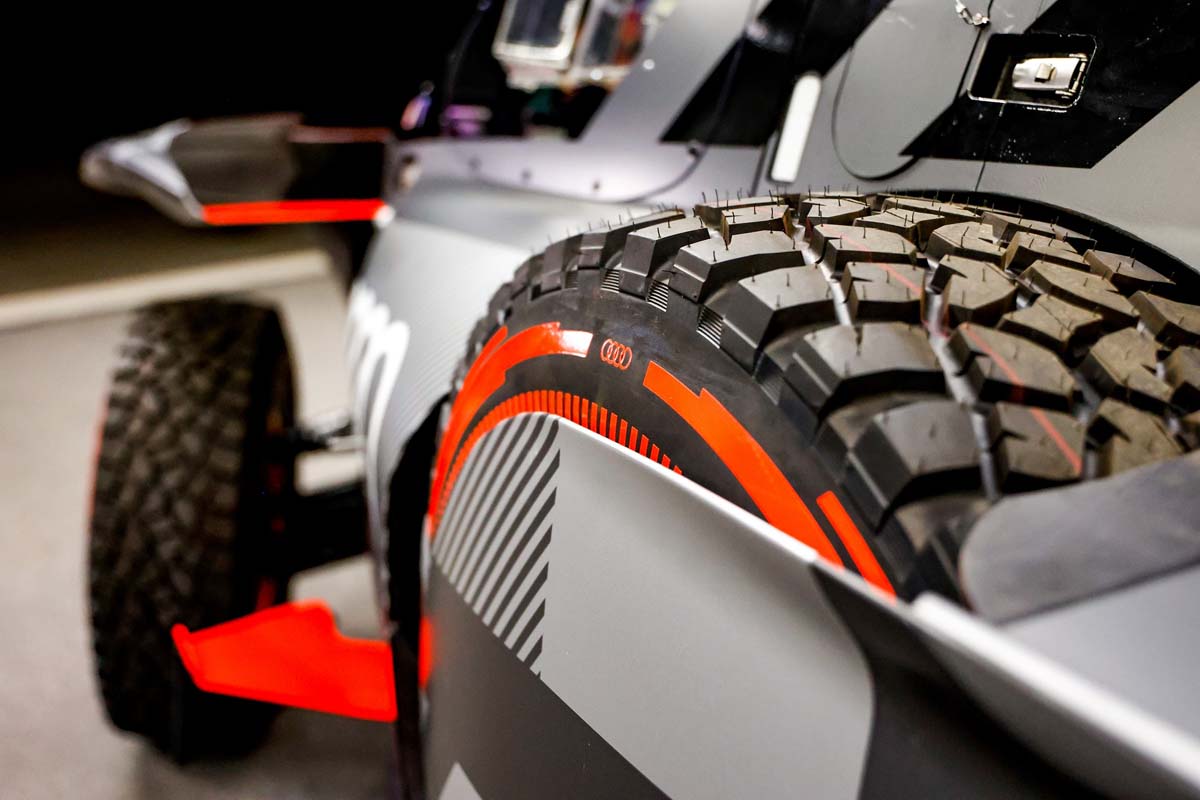 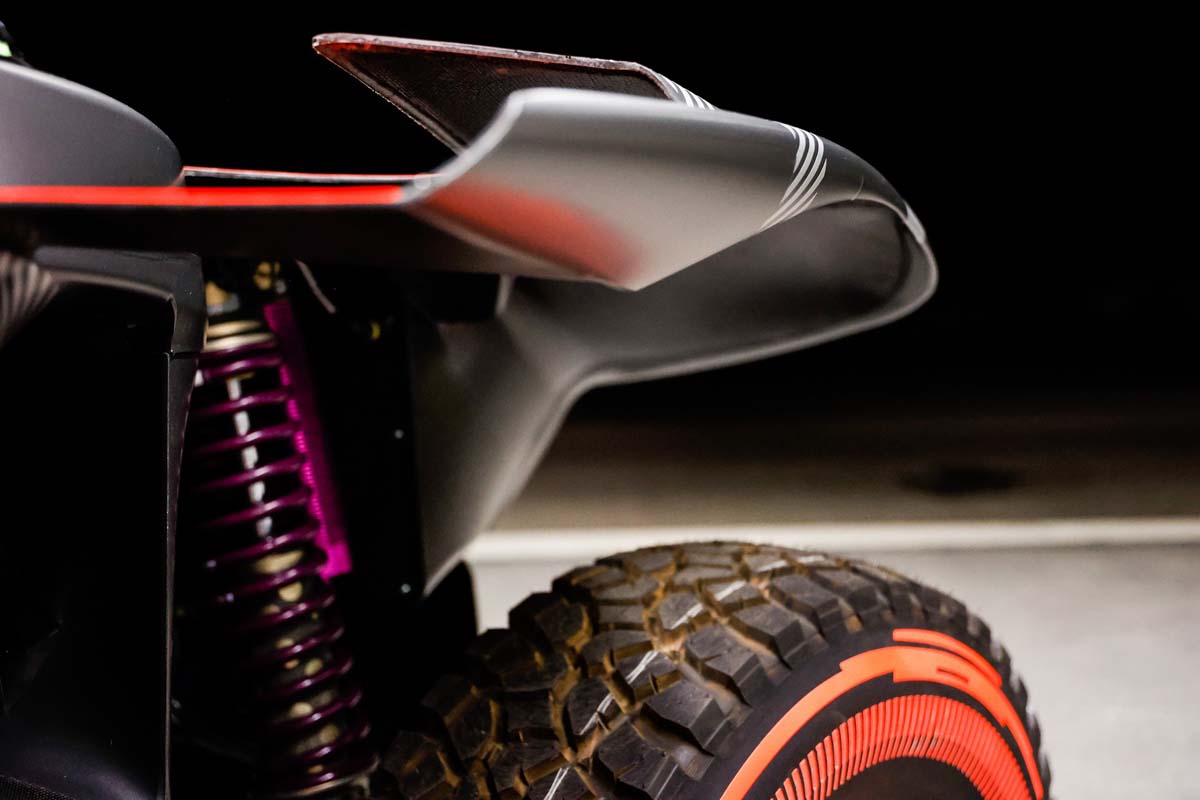 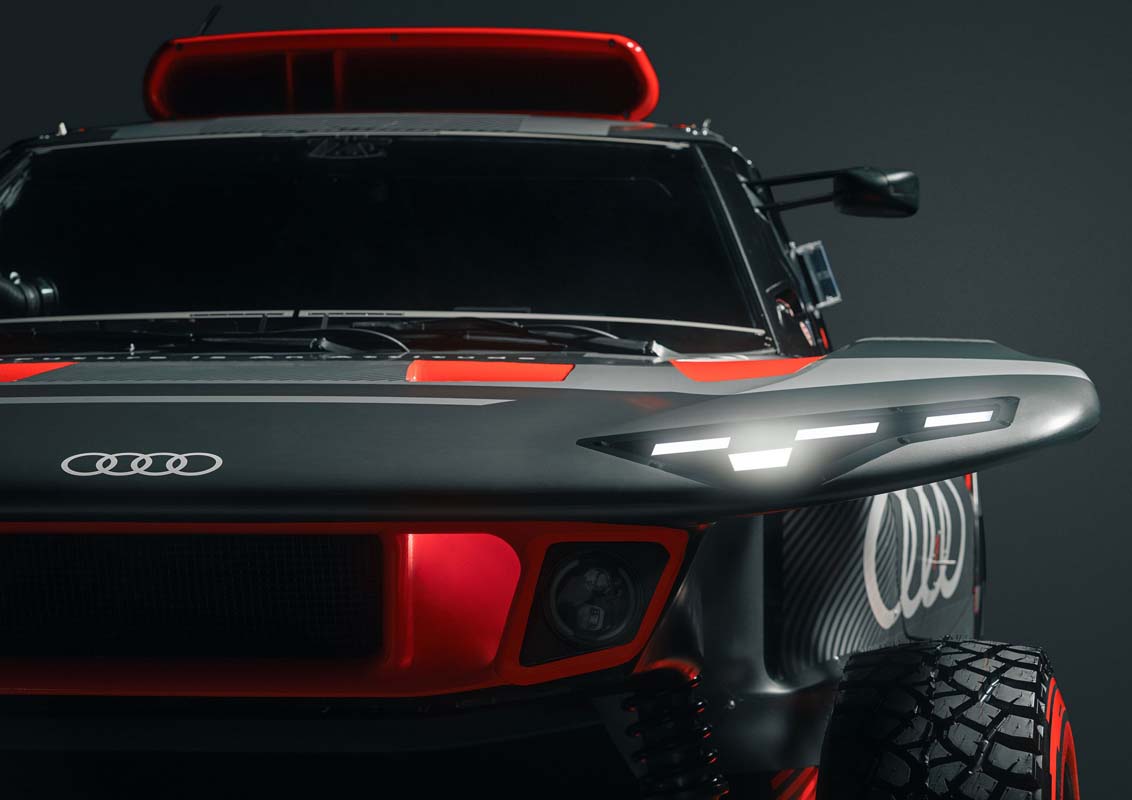 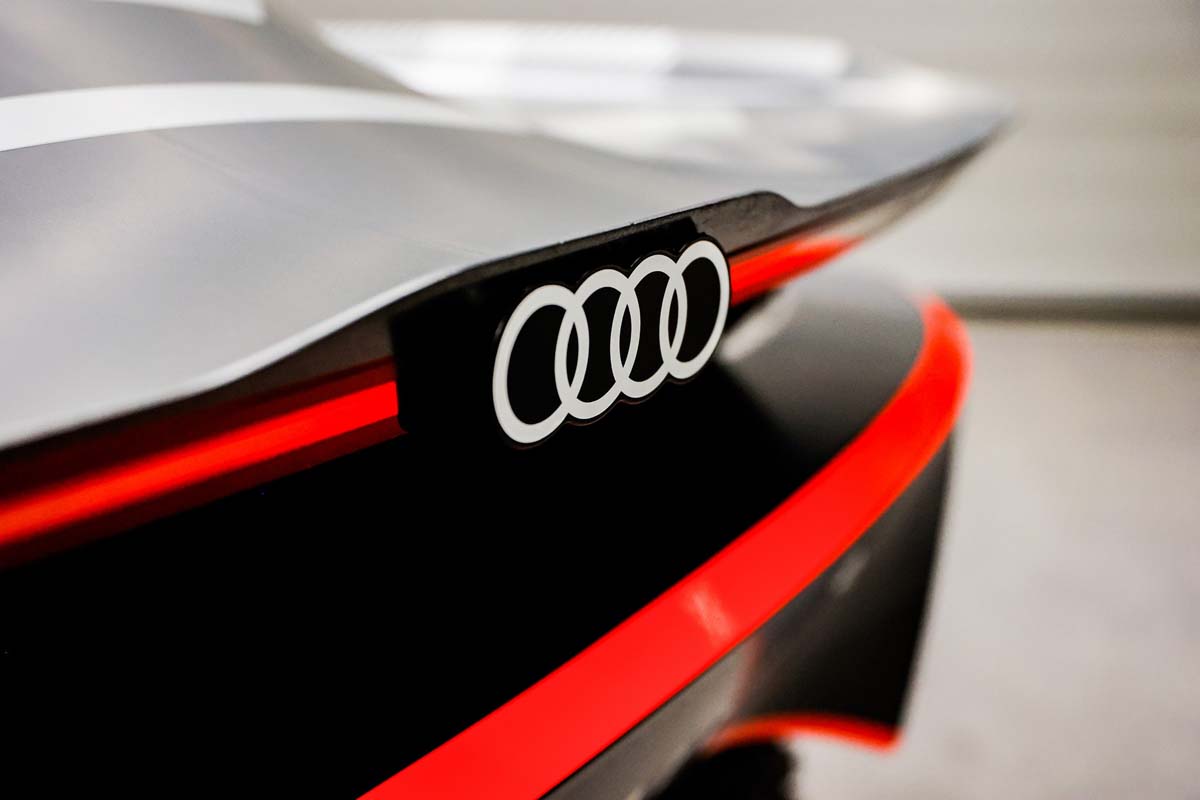 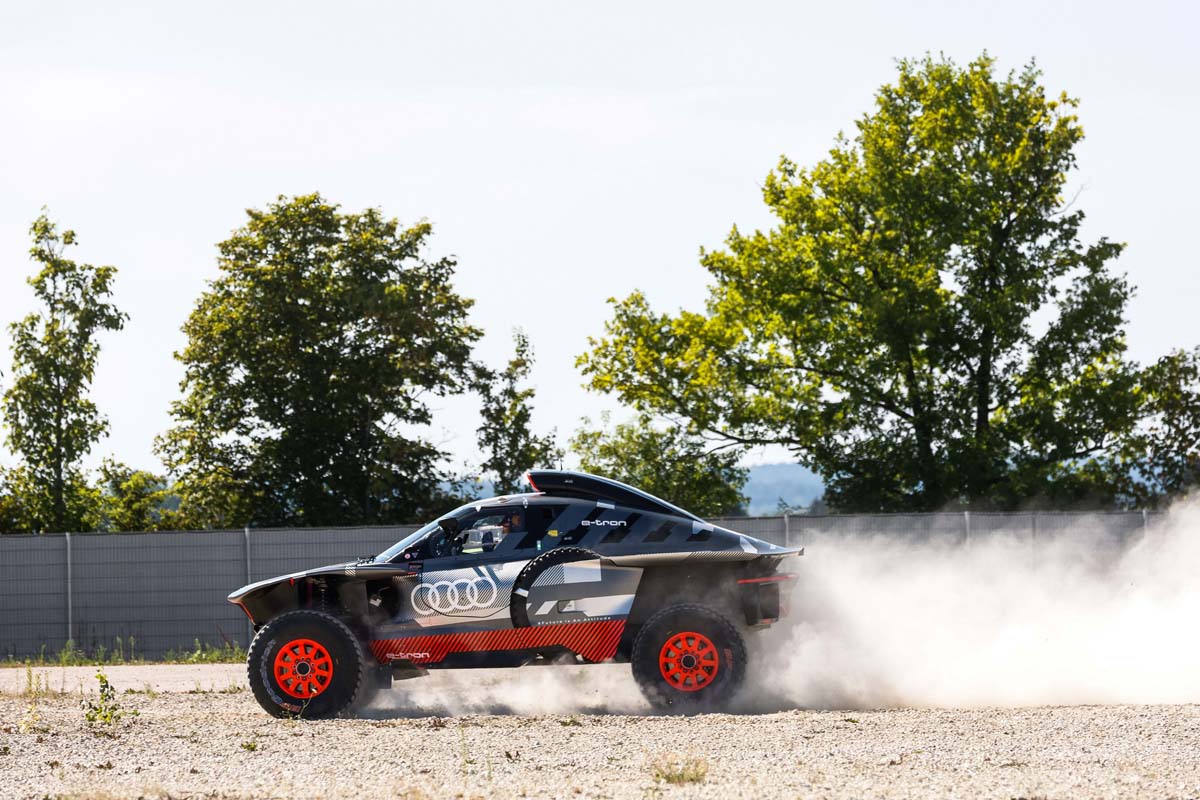 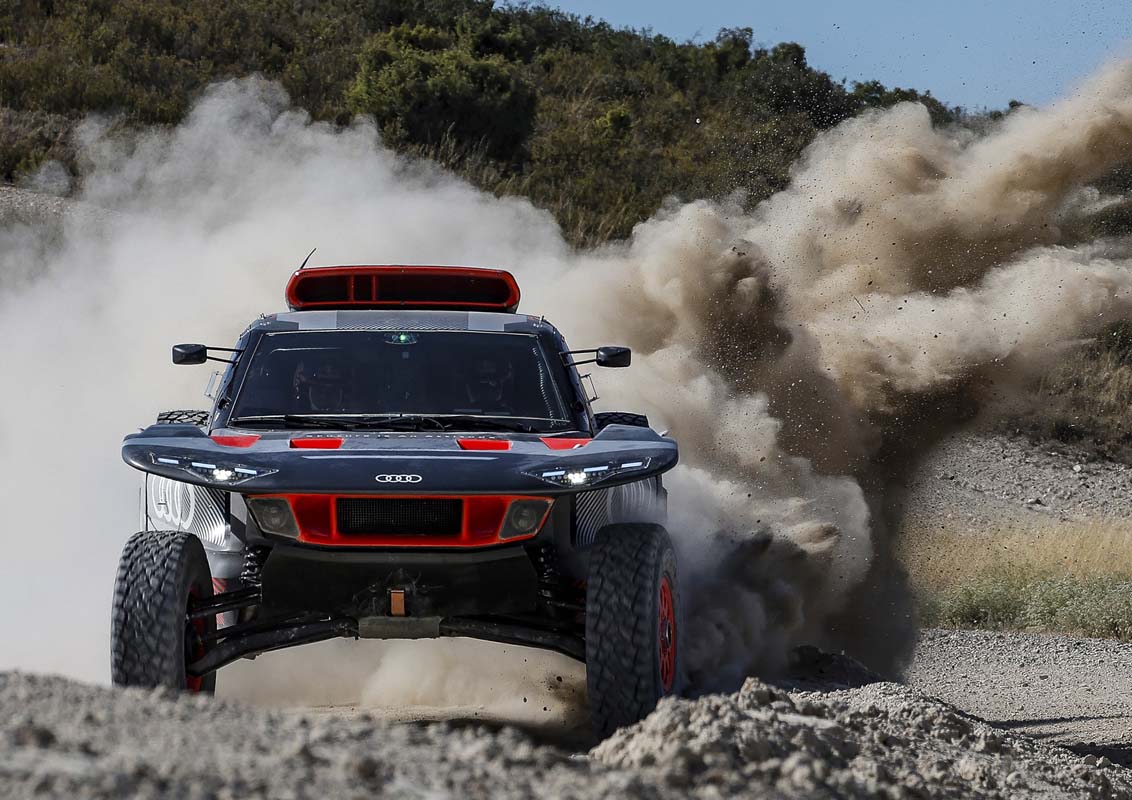