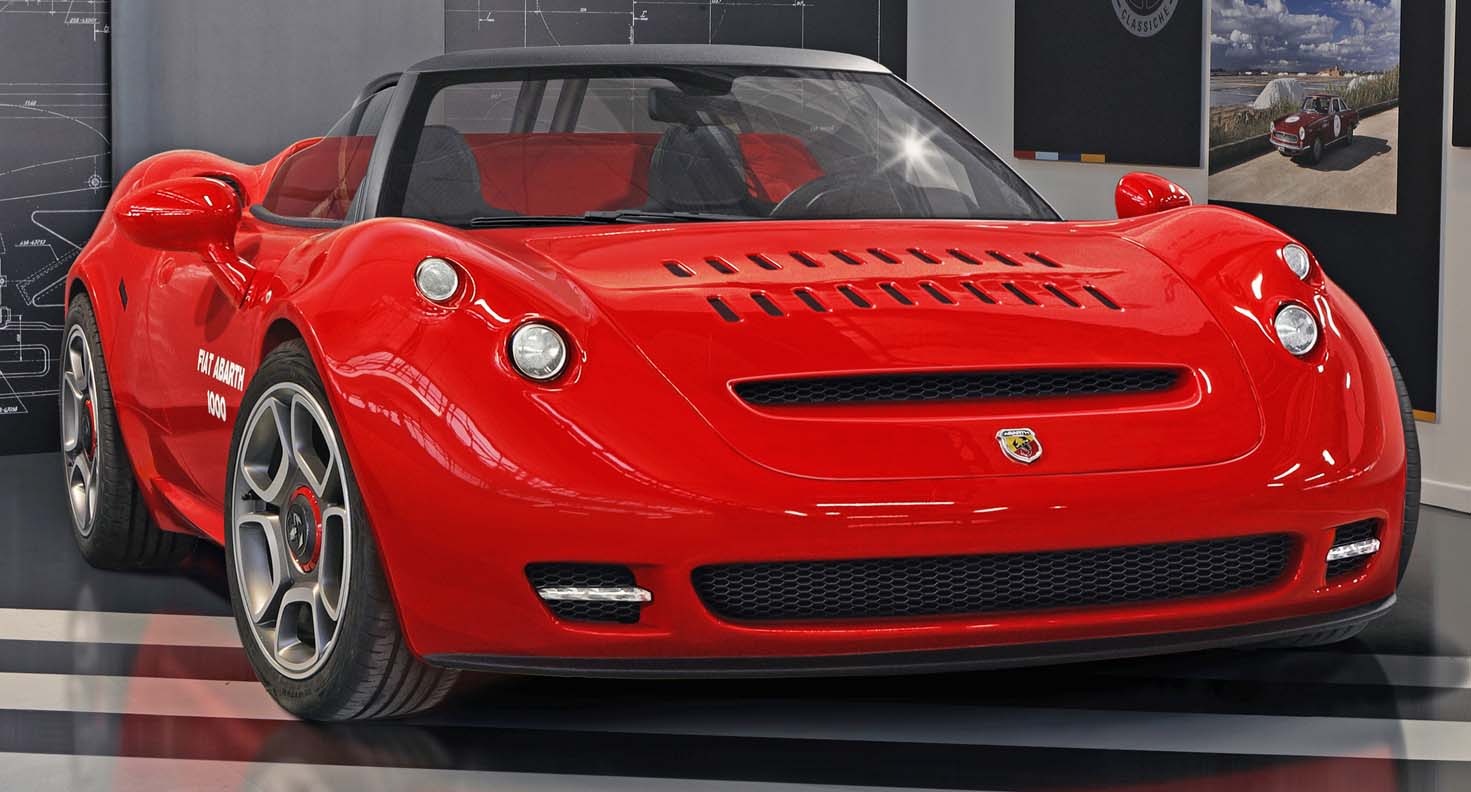 In the latter half of the 1950s, Alfa Romeo and Abarth worked in tandem to produce a sports car with a limited displacement. Entrusted to Mario Colucci – a Milan engineer and Alfa Romeo employee, the project came to fruition in 1958 with the manufacturing of an Abarth 1000-based Alfa Romeo, a compact coupé – driven by an engine based on the 4-cylinder Sprint Veloce, but with a lower displacement – and characterized by a chassis consisting of a lattice of pipes. “Dressed up” in bodywork made by Bertone to a design by Franco Scaglione, the car remains a unique piece.

At the end of this collaboration, Carlo Abarth hired Colucci as Technical Director, then in 1966 entrusted him with the ambitious project of the Abarth 1000 SP.

The car’s name indicates the engine displacement – derived from that of the Fiat 600 – and the Sport Prototipo class, the type of closed-wheel cars produced specifically to take part in competitions and constructed in limited editions. Designed to excel in both short hillclimbs and endurance races, the 1000 SP features simple, low and sleek lines.

Lightweight and powerful, it won a major series of international victories – the first of which in its class at the Nürburgring 500 km in September 1966, helping to consolidate the sporting prestige of the Abarth brand. The skilled engineer Colucci thus completed his concept of a tubular chassis racing car, which had begun a few years earlier with the Alfa Romeo Abarth 1000.

Rightly considered a milestone in Abarth’s competitive history, in terms of style, performance and victories, the 1000 SP continues to inspire the designers at the Centro Stile Fiat & Abarth. They have now produced a contemporary reinterpretation of the iconic 1960s Sport Prototipo: a medium-sized sports car, with an eye-catching silhouette and essential lines.

This idea of a lightweight car with an excellent weight-to-power ratio became the basis of a project that became reality in 2021, fully in line with its forerunner: the points and lines of the original car’s design were respected to ensure continuity between the ’60s sports car and the concept car of the new millennium.

The Abarth 1000 SP respects three fundamental design principles already seen in the ’60s model. First and foremost, the lightness of its forms, its volumes and of course its weight.

The second principle is aerodynamics: modern design technologies have made it possible to combine the iconic lines of the 1000 SP with an aerodynamic coefficient worthy of a contemporary sports car.

Finally, ergonomics, aimed at improving the user experience, to optimize the vehicle’s control and agile driveability.

The Abarth 1000 SP echoes the lines and aesthetics characteristic of its forerunner. The sinuous body, with the soft surfaces of the fenders highlighting the position of the wheels, takes up the pattern of the spider with a central engine. The cockpit glazing features shaped side deflectors, with their profile lowered towards the roll bar, the latter strictly “in view”, to highlight our being in the presence of a “no-holds-barred” spider.

The rear geometries of the Abarth 1000 SP accentuate the ideal harmony between the lights and the exhaust pipes. The livery is strictly red and the characteristic air intakes appear all over, from the front bonnet to the cooling slots in its rear counterpart.

The headlights also follow the minimalist scheme of the historic 1000 SP, with point lights on the nose and a single pair of round headlights to accentuate the car’s remarkable breadth when seen from behind. The Abarth 1000 SP thus maintains a very similar identity to its forerunner’s, courtesy of the meticulous work to update the historic, no-holds-barred Abarth 1000 SP.

Conversely, the tubular chassis under the “skin” of the historic Sport Prototipo gives way to a hybrid frame, with a central cell in carbon fiber and an aluminum front. The Abarth 1000 SP features a powerful turbocharged 4-cylinder, 1742-cc central engine, capable of delivering up to 240 hp in output.

The sophisticated mechanics of the concept boast overlapping triangle suspension in the front, with an advanced MacPherson strut in the rear.

Precisely 55 years after the debut of its forerunner, the Abarth 1000 SP – only one model of which has been produced to date – is once again ready to strut its stuff: in the fall, it will be taking part in major events focused on vintage cars. 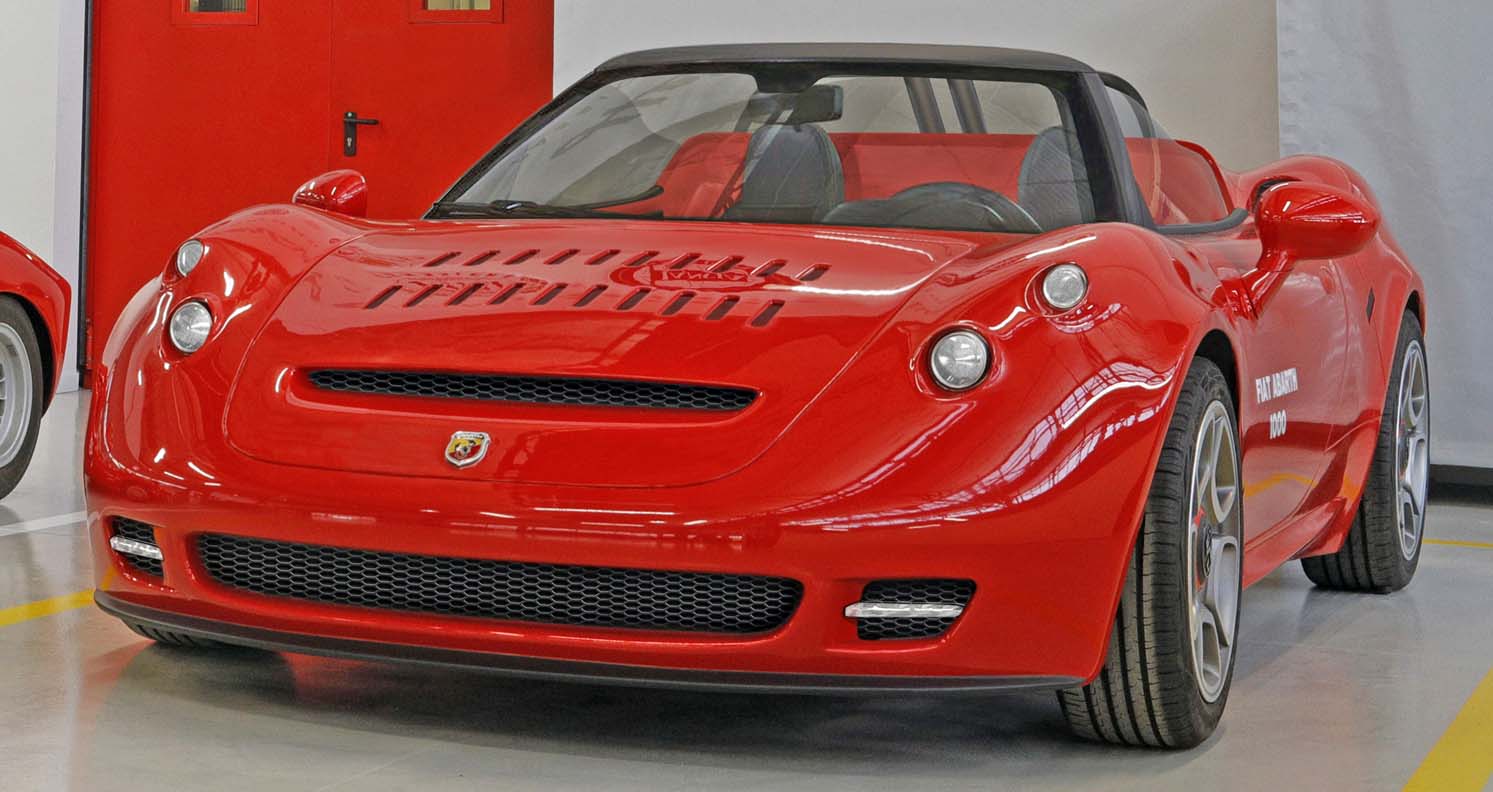 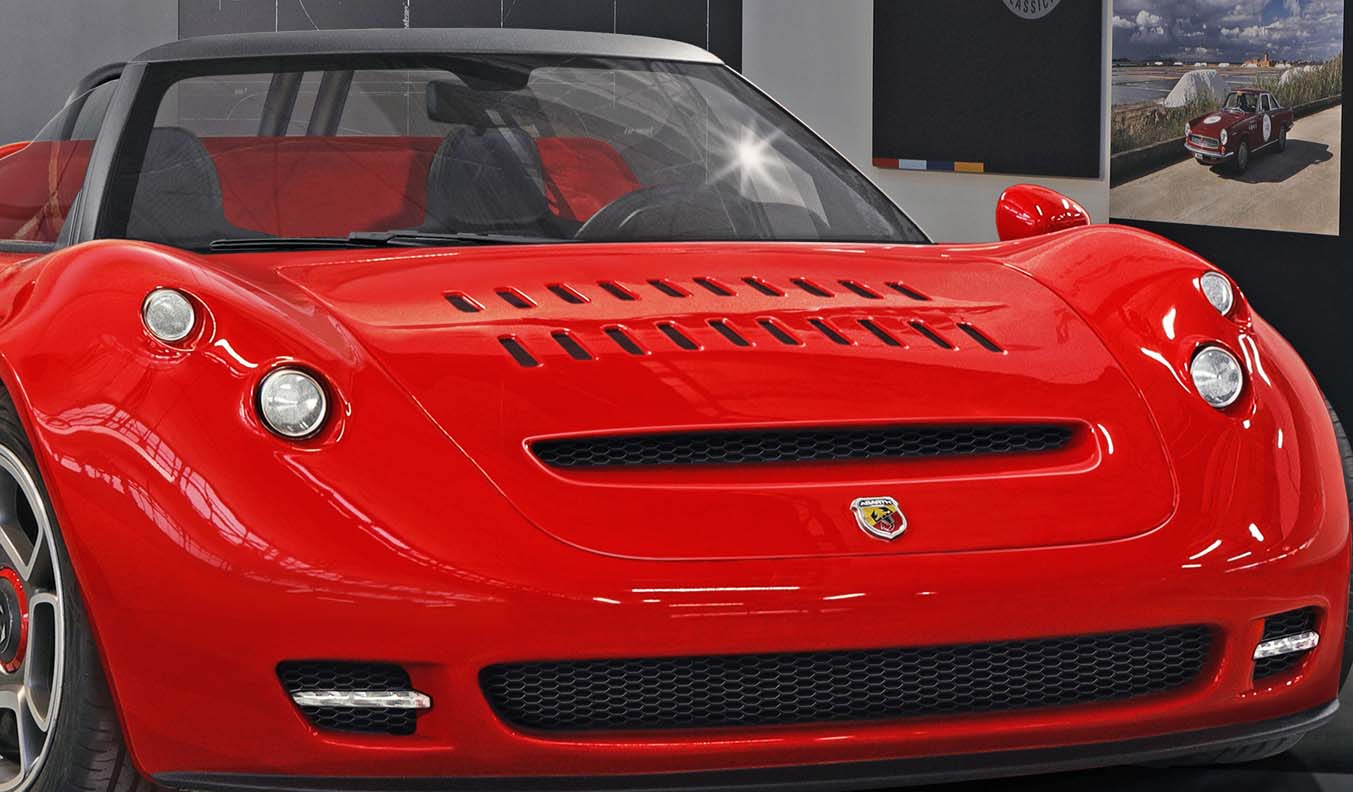 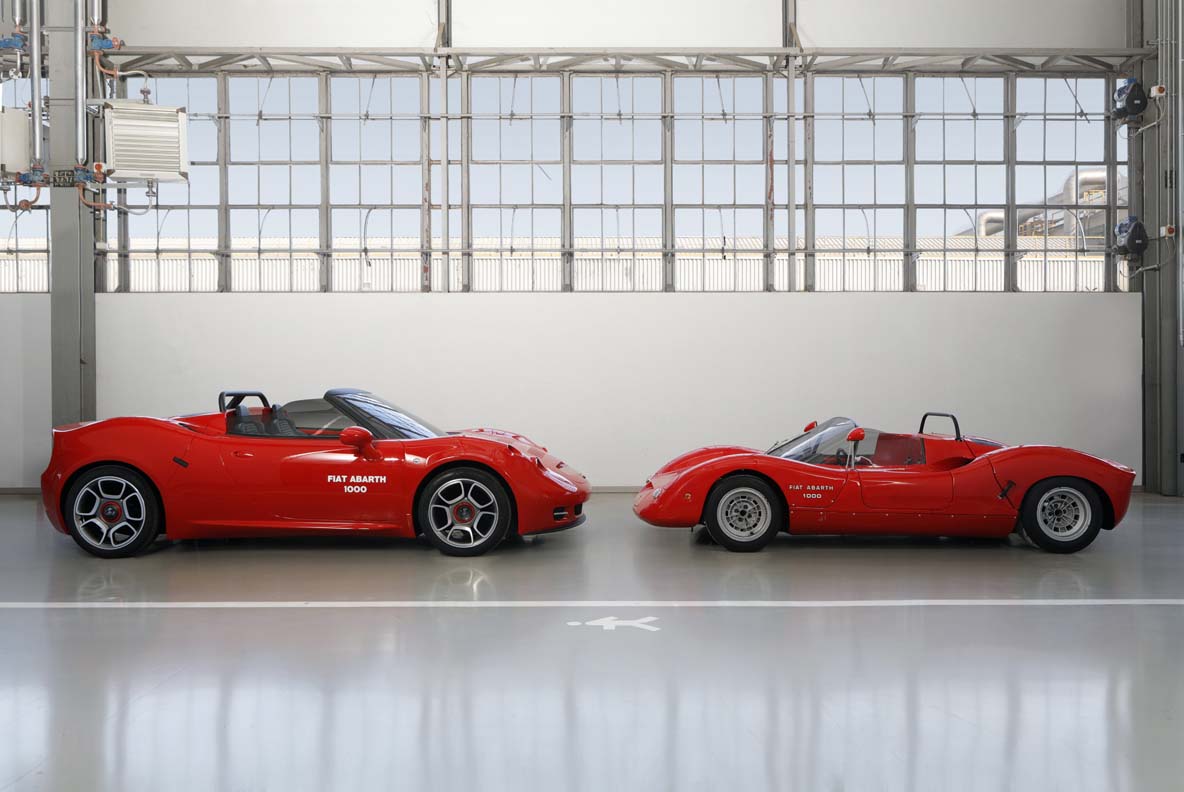 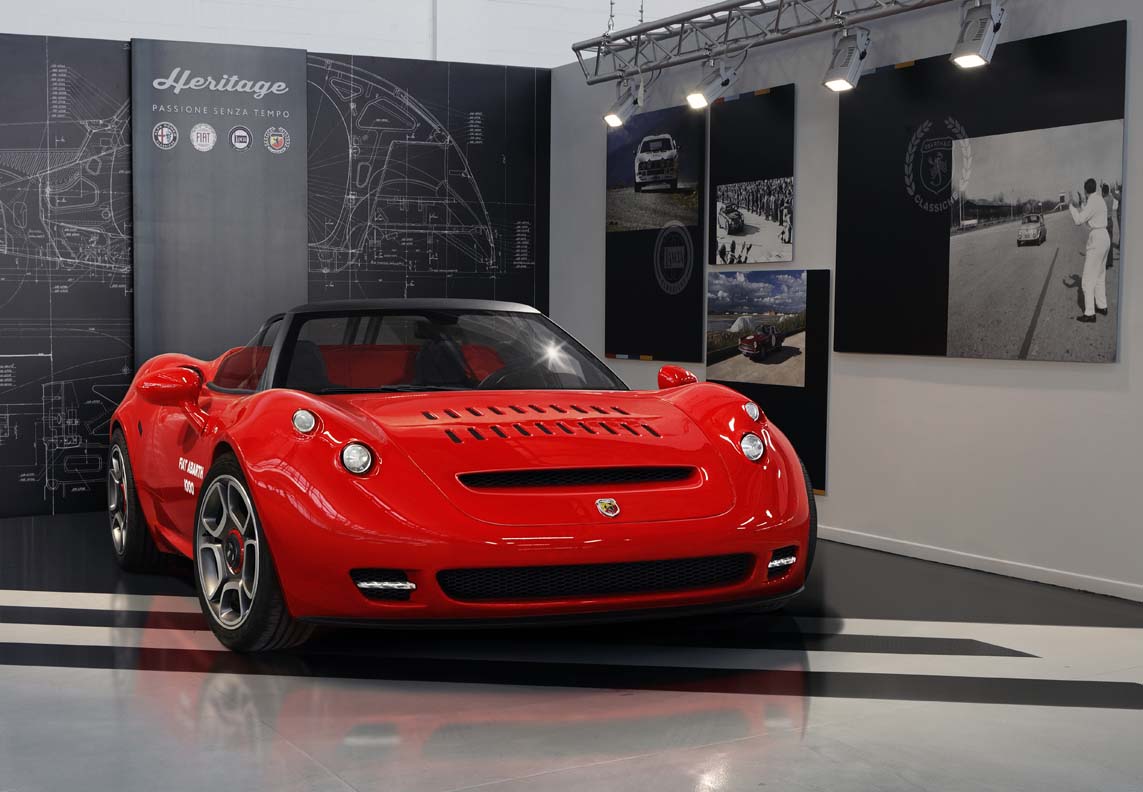 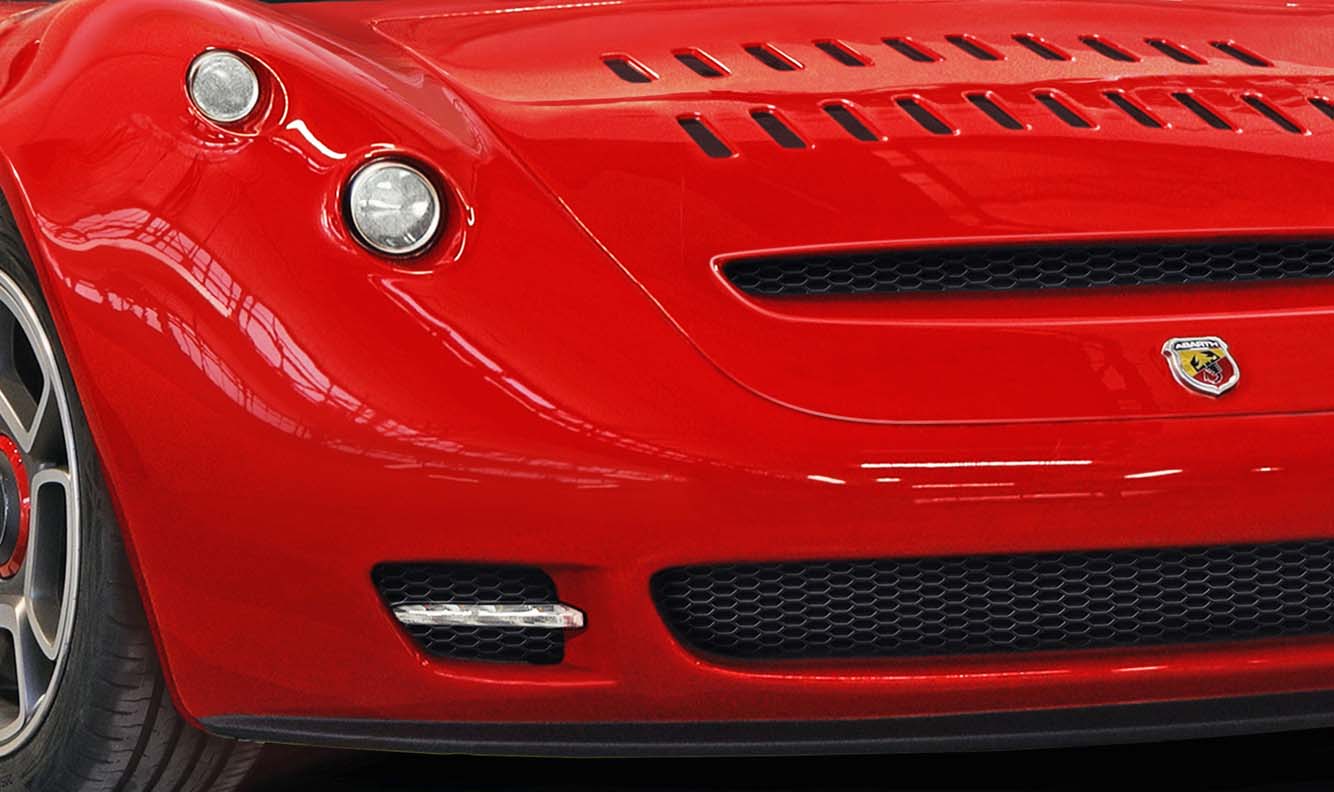 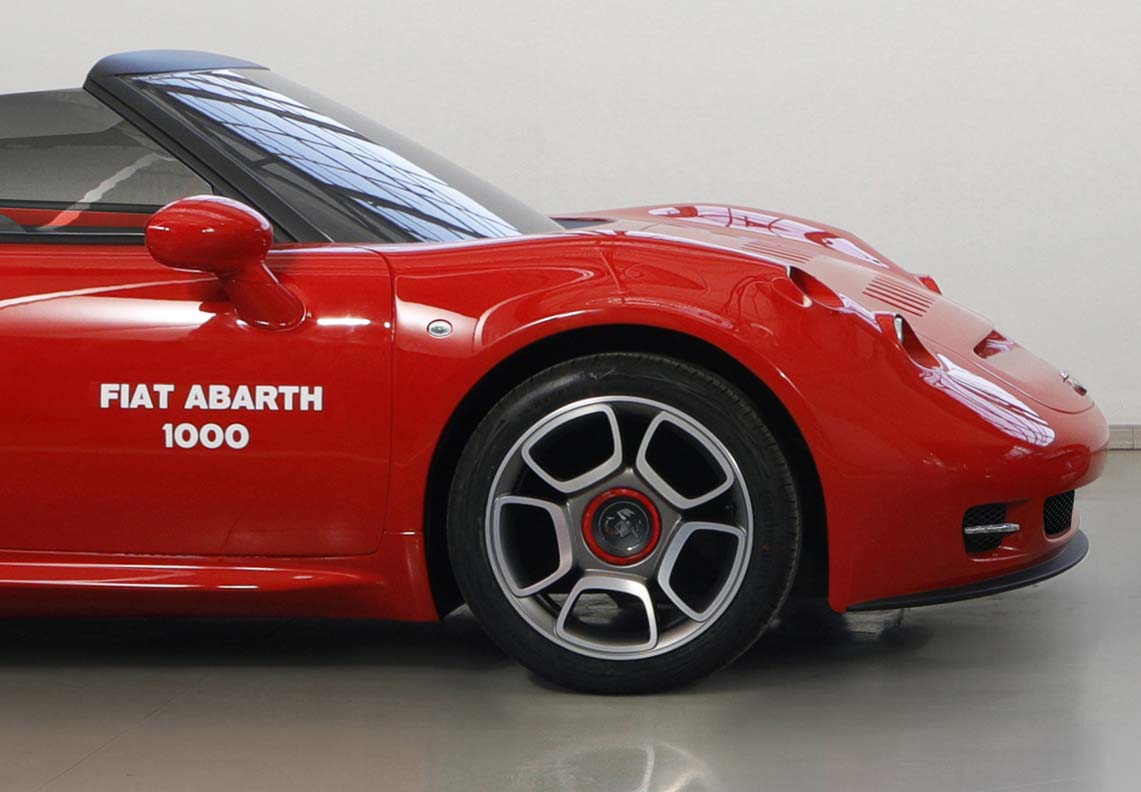 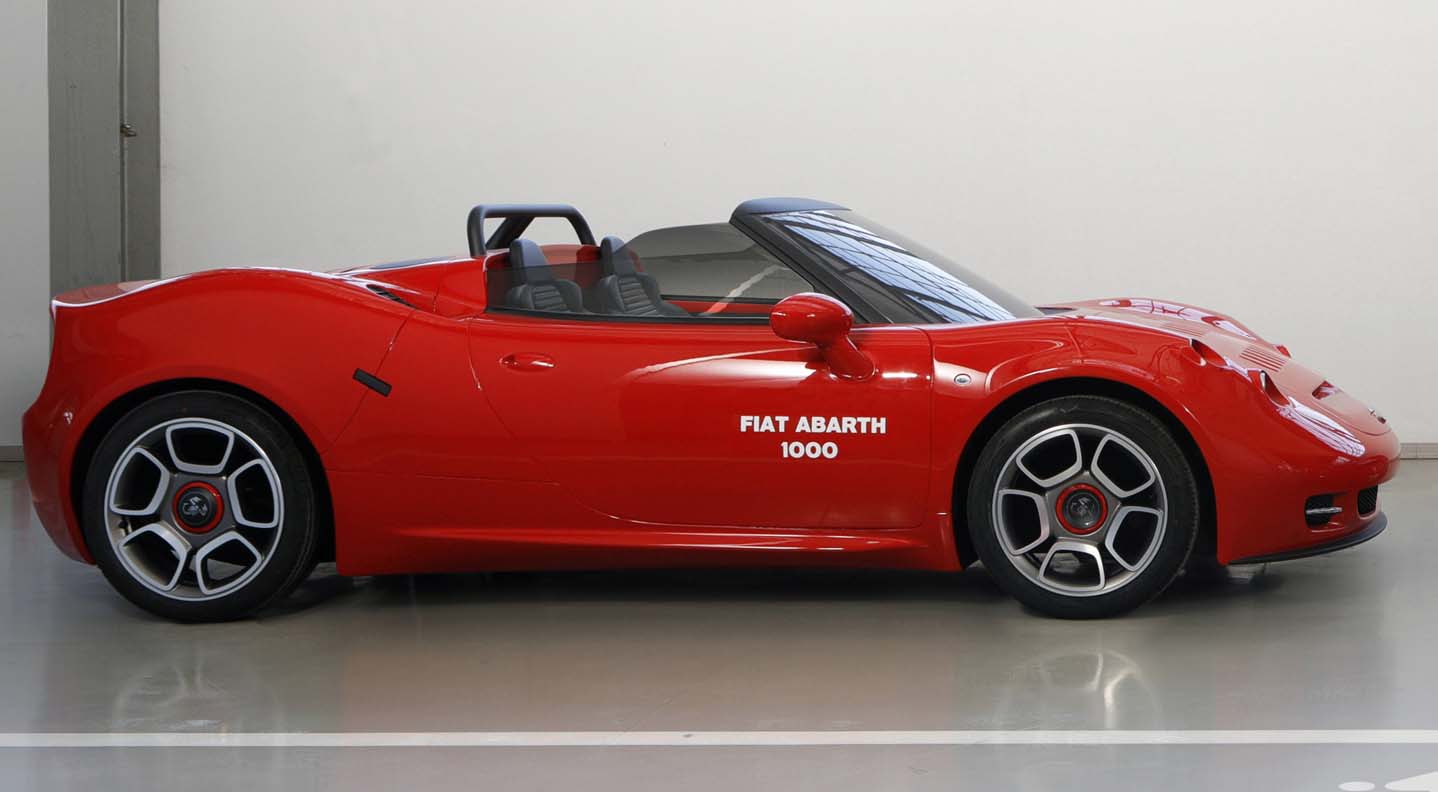 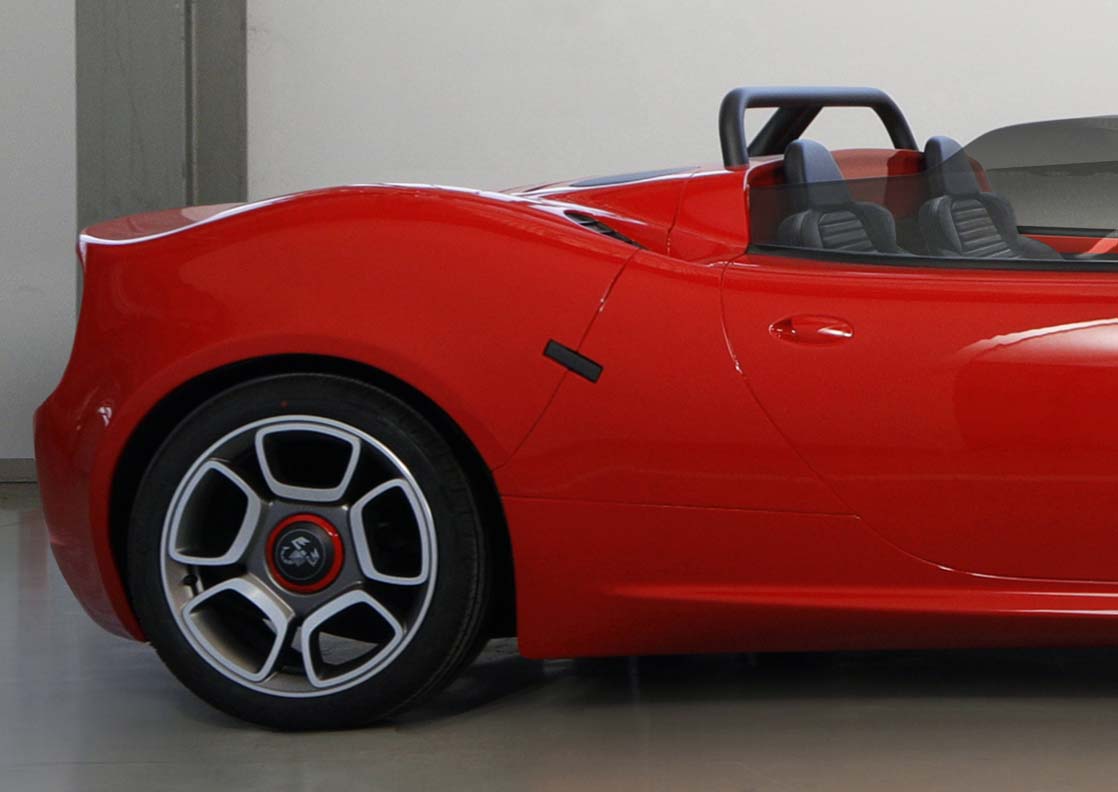 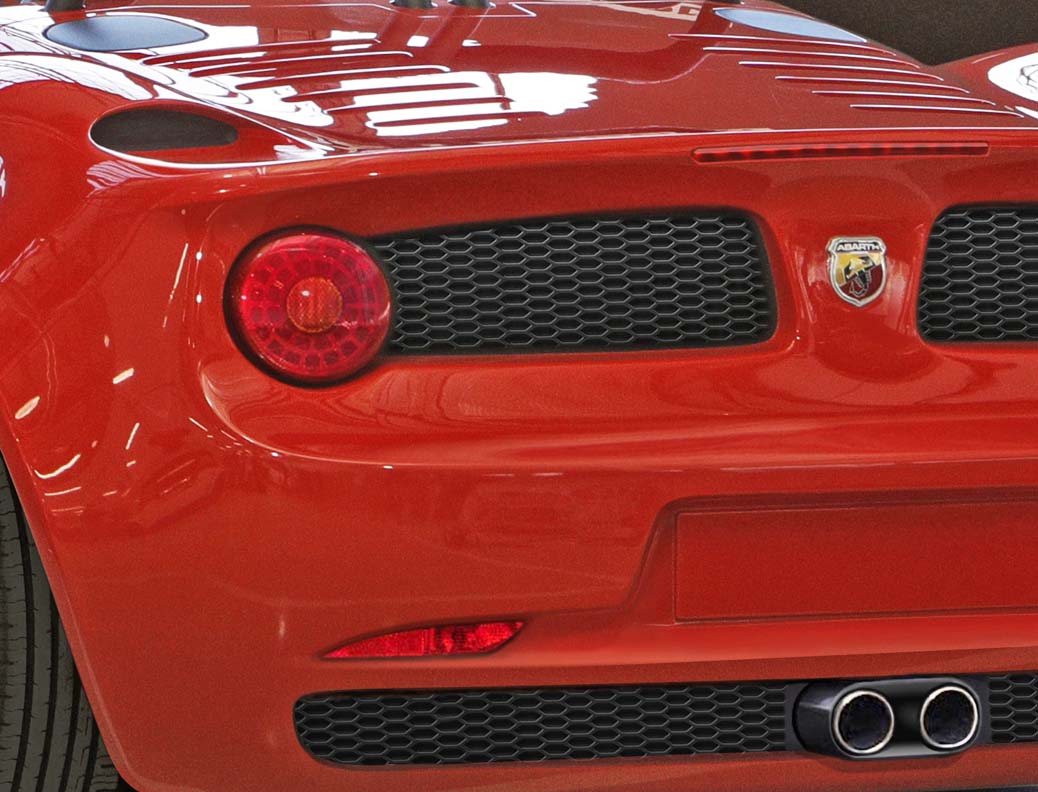 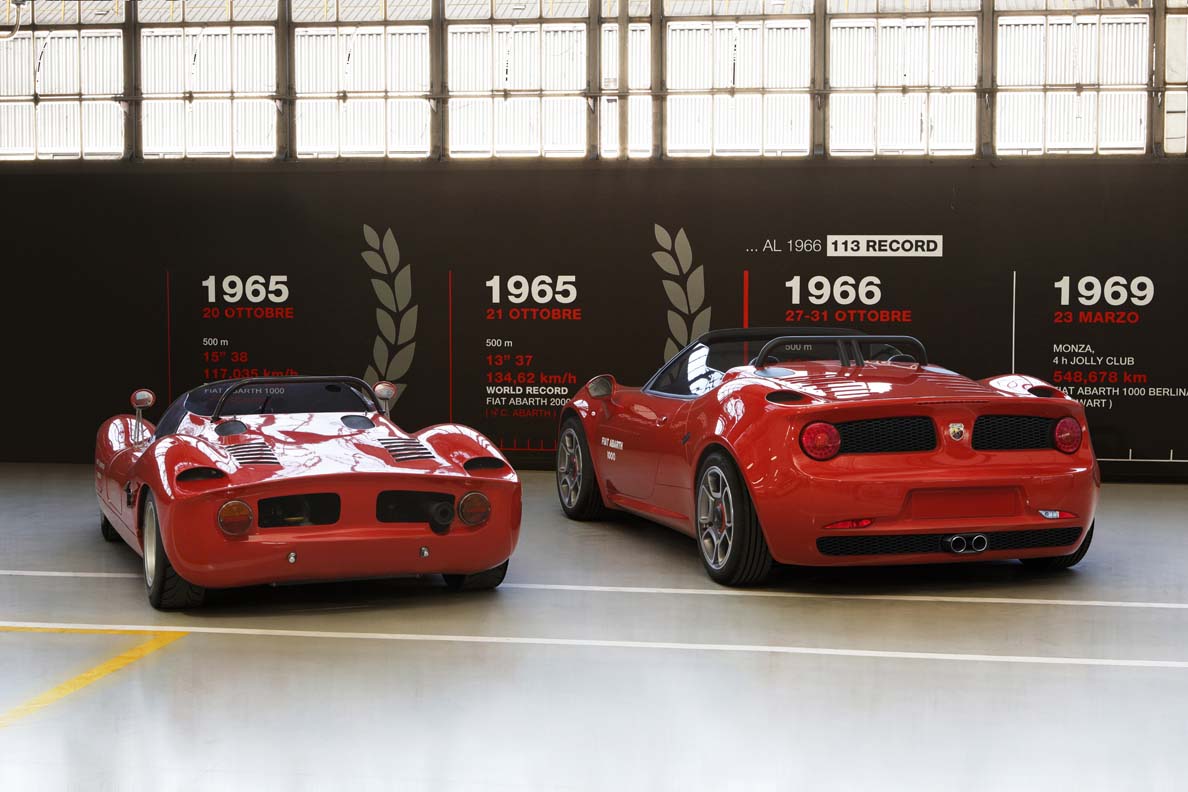 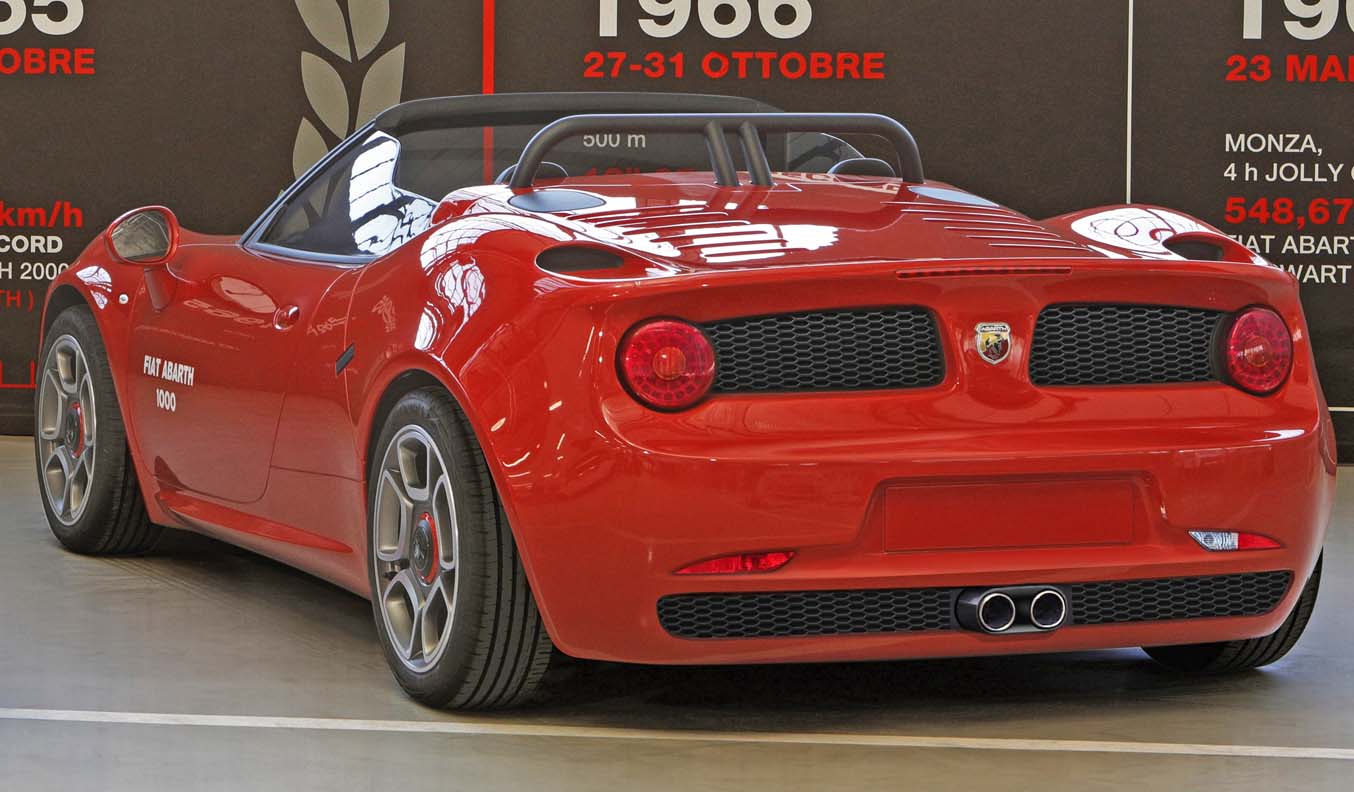 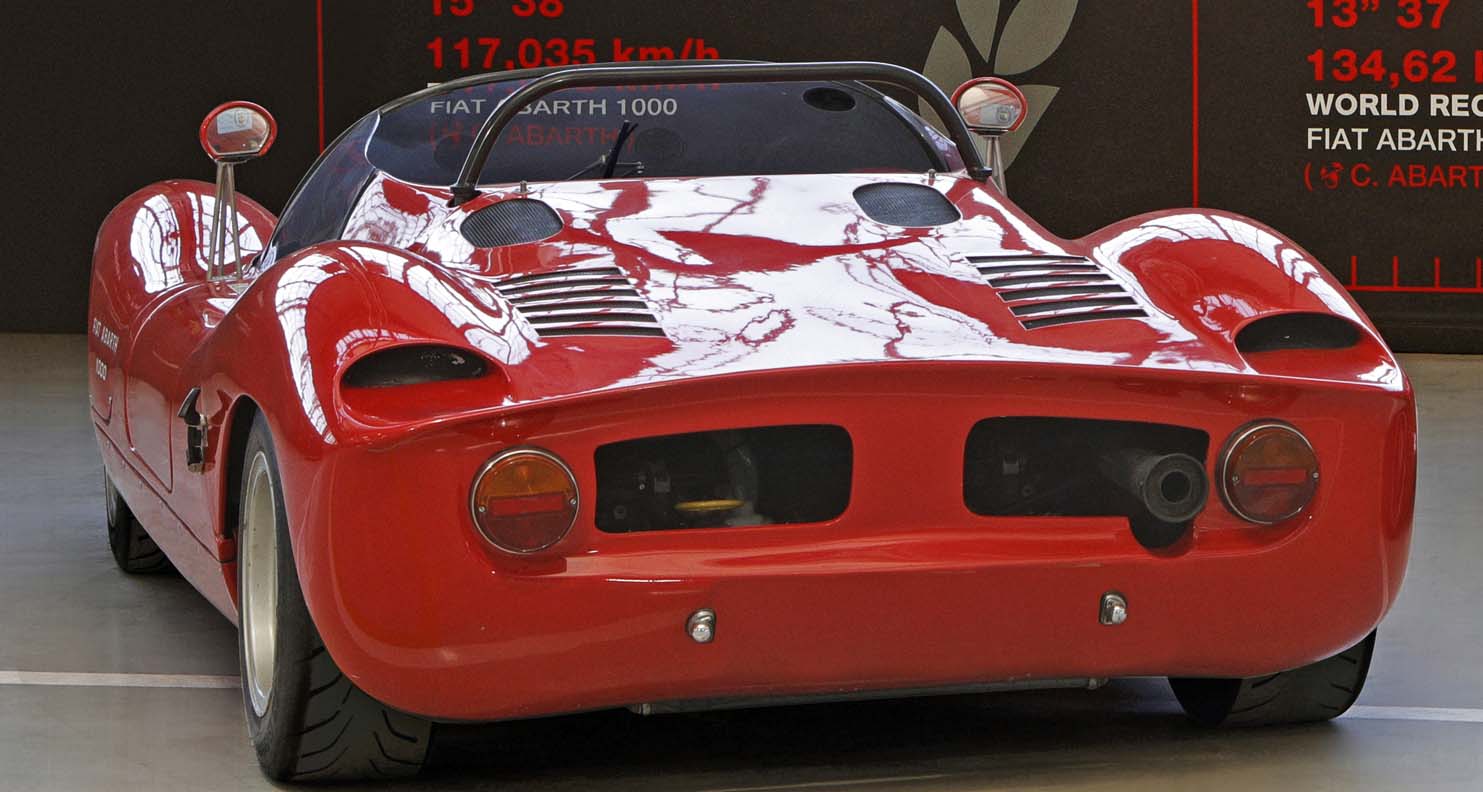 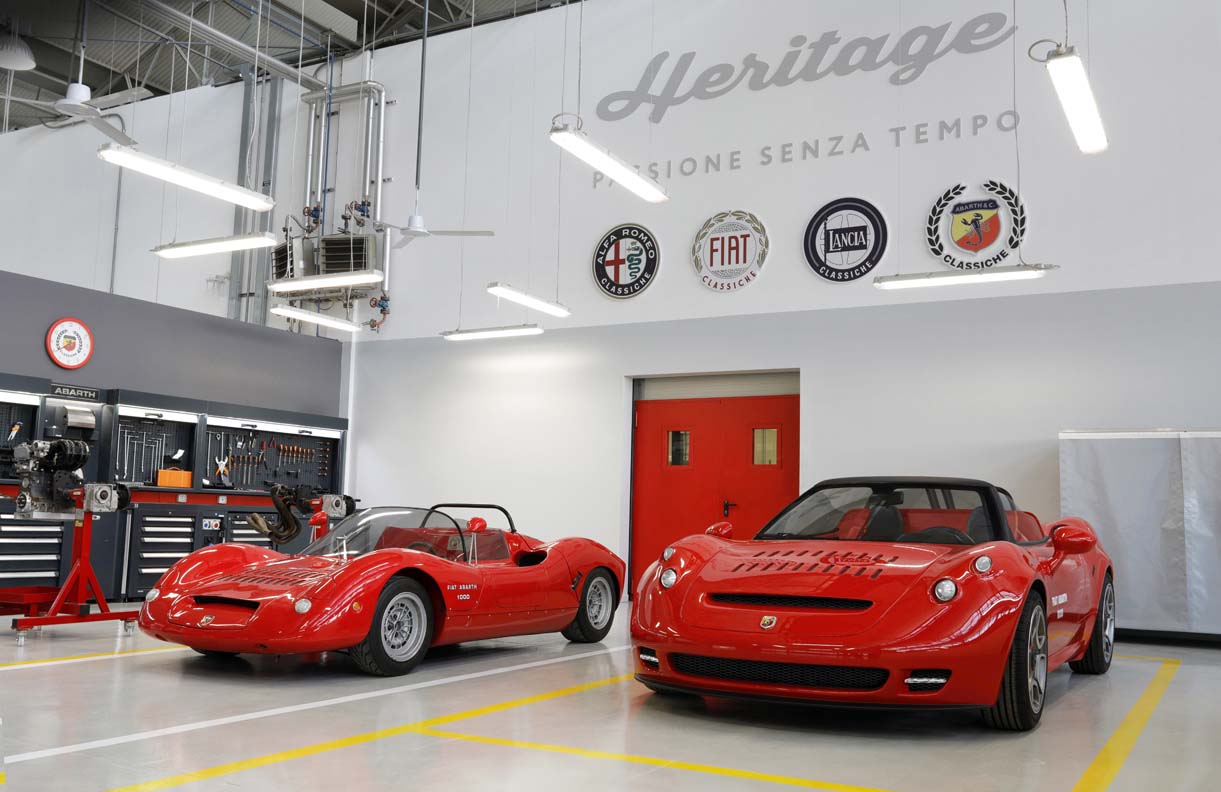 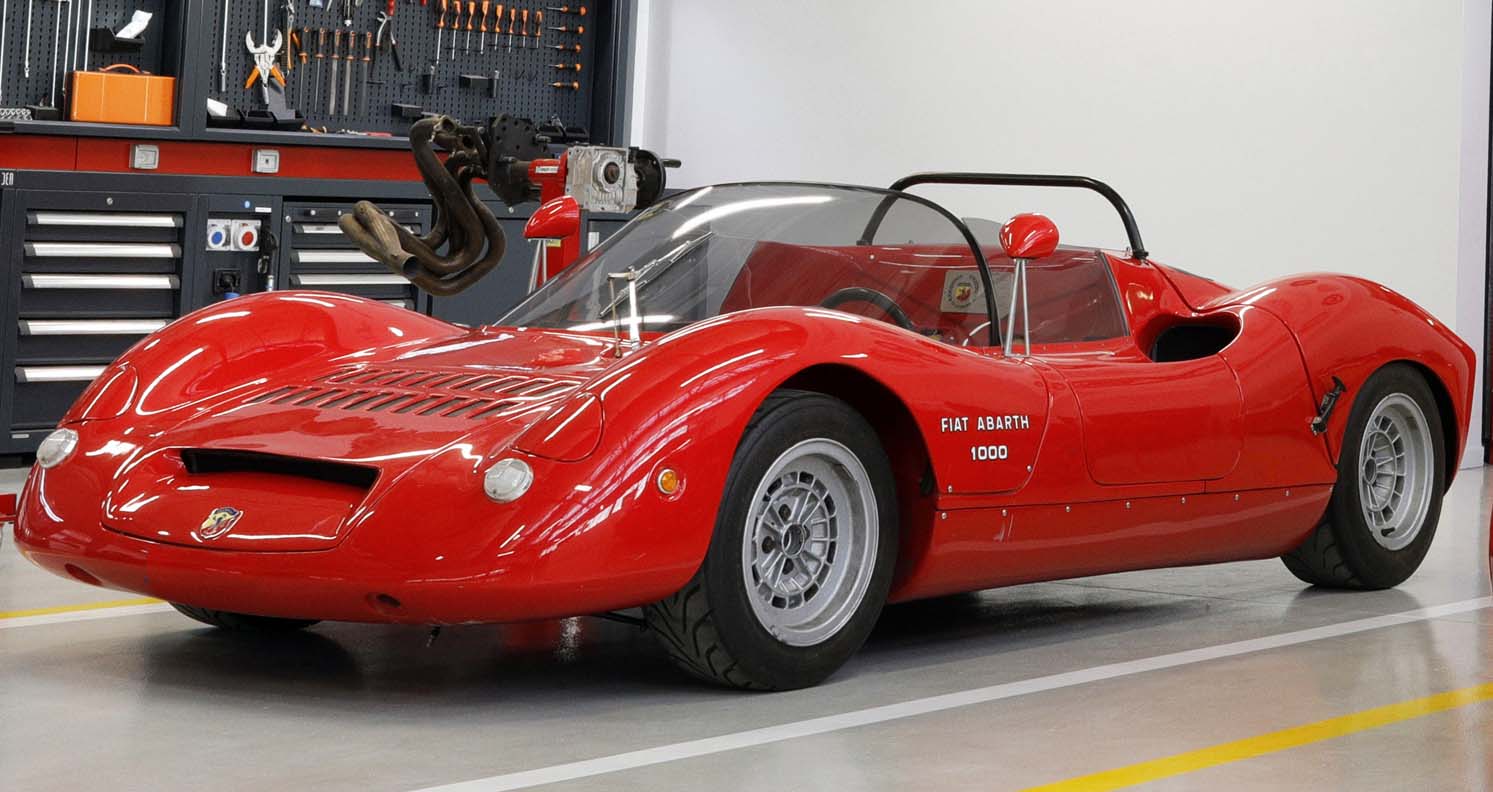