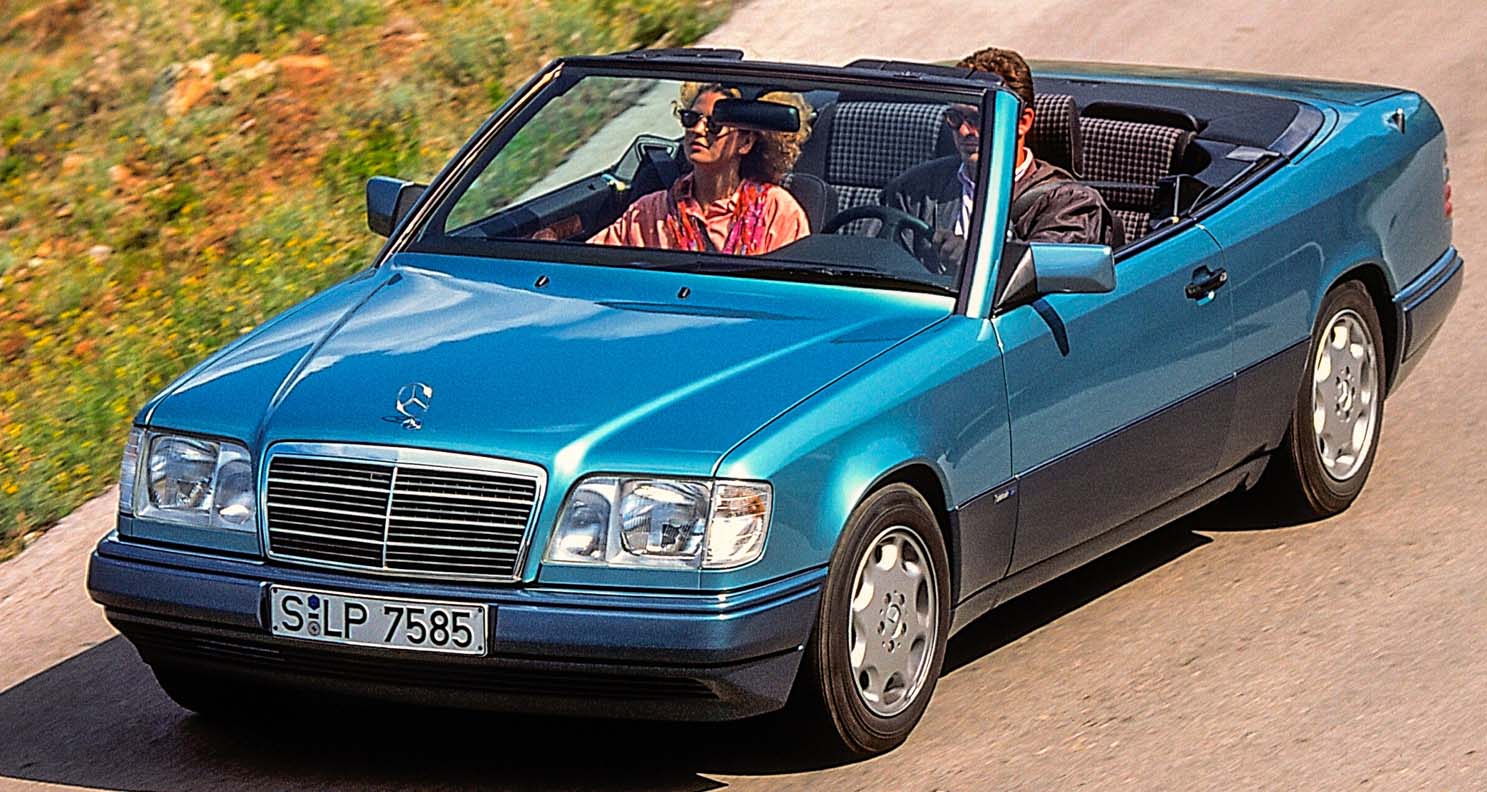 124 model series Mercedes-Benz Cabriolets are sought-after modern classics. They perfectly combine the passion for elegant, open-top cruising with the Stuttgart-based brand’s high technical standard in the luxury mid-range series. The vehicles premiered 30 years ago at the International Motor Show (IAA) in Frankfurt/Main between 12 and 22 September 1991 – seven years after the presentation of 124 model series Saloons.

With this convertible four-seater, Mercedes-Benz successfully bridged a 20-year gap to a sporty and luxurious tradition, as legendary W 111/W 112 Cabriolets were produced until 1971.

The Cabriolet of what would later become the E-Class was based on the 124 model series Coupé. After the 500 E high-performance Saloon was introduced in autumn 1990, the convertible four-seater represented a further flagship project for the 124 model series. Engineers went to great lengths to make the project a reality: they modified around 1,000 parts or designed them from scratch to comply with stringent demands in terms of passive safety and driving comfort despite the omitted roof structure.

Elements including the sheet metal thickness at A- and B-pillars as well as on the lateral frame side members were reinforced, the soft top compartment was installed as a cross brace and a die-cast member was screwed to the floor assembly tunnel and the instrument panel’s cross member.

Vibration dampers were additionally employed to optimise driving comfort. Developers had already used such elements in the W 100 model series Mercedes-Benz 600 Landaulet, which was introduced in 1965.

A total of four of these spring-mass systems altogether weighing a total of 26 kilograms were installed in critical areas of the Cabriolet: on the front left suspension strut dome, in the roof frame and in the rear boot wells.

A comparative test conducted by “auto motor und sport” specialist magazine (Issue 19/1994) consequently came to the following conclusion: “No other four-seater convertible is more rigid than the Mercedes.” US-American “Road & Track” magazine recognised the qualities of the E 320 Cabriolet as part of a comparative test in Issue 7/1994: “A good portion of the price difference is to be found in the structure of the car.

It is noticeably quieter than the other two with the top down. Road surface irregularities are noted by the suspension and announced to the driver in a subtle way without upsetting anyone’s aplomb. On the highway, the E 320 is almost as quiet as its coupe and sedan siblings, thanks to remarkably solid body structure and the excellent fit of the convertible top.” 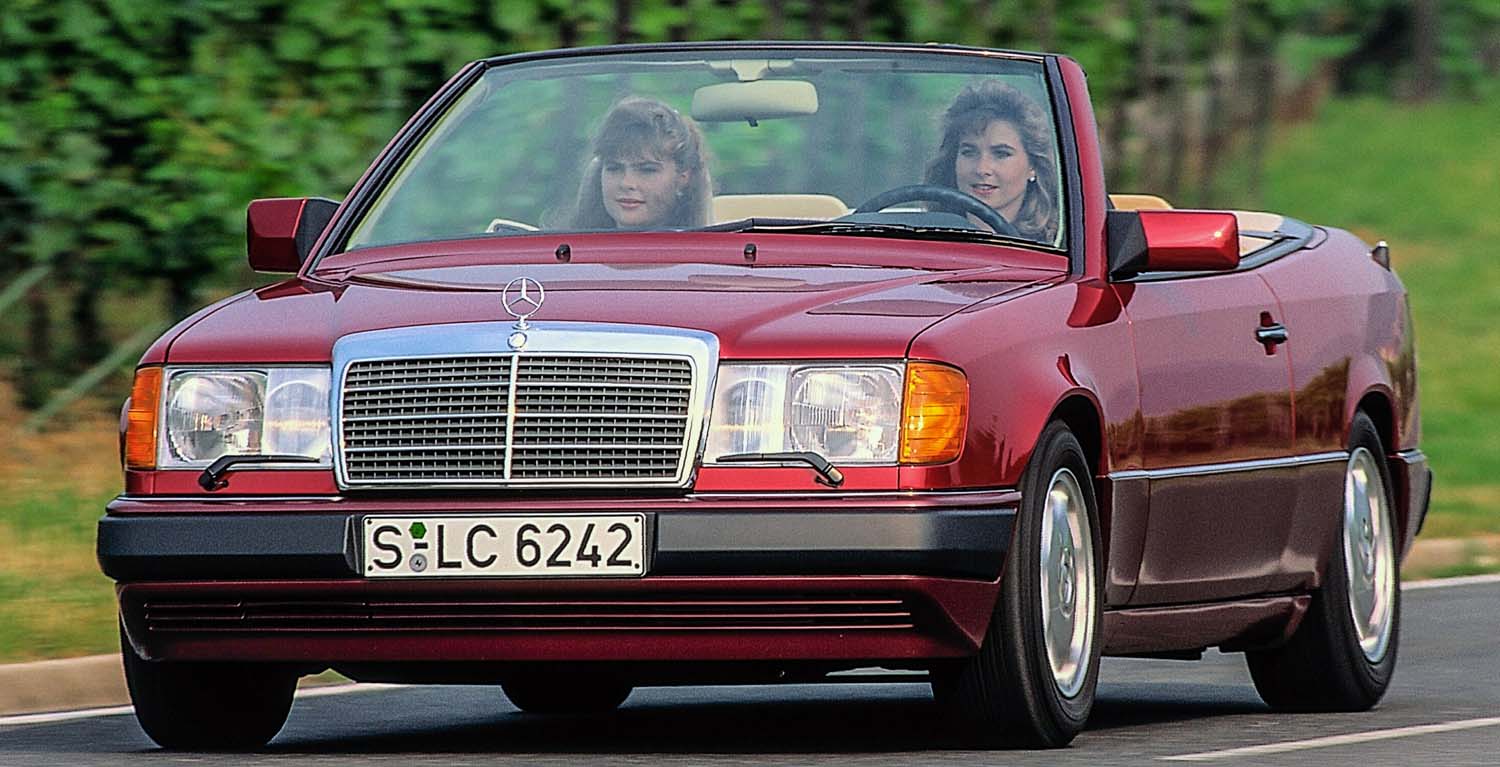 The levels of passive safety were also exemplary: in the event of a frontal, rear or side impact, the Cabriolets met the high standards of the Saloon, Estate and Coupé. A-pillars had been welded to internally installed profiled sheets to form a sturdy unit, also offering occupants adequate safety in the event of the vehicle rolling over. A newly developed and patented linearly operating roll bar was installed behind the rear seats featuring the shape of two individual head restraints at the top.

The bar would extend upwards on a slightly elliptical trajectory within 0.3 seconds once the vehicle’s sensors detected an impending rollover. It could optionally also be manually extended and retracted to act as a head restraint for occupants in the rear.

The fully retractable soft top also met stringent demands in terms of driving comfort. The highly accurate design weighing 43 kilograms consisted of 27 linkage parts and 34 joints. When folded up it had a volume of a mere 80 litres. The soft top was insulated by a 20-millimetre-thick layer of fibre fleece between the outer liner and the inner soft-top headliner.

The outer skin was also permanently connected to the front and central frames to prevent the soft top from puffing out, a characteristic otherwise fairly common in cabriolets.

As a result, the 124 model series Cabriolet felt almost like the Coupé when it was moving along with the soft top closed. The large, heated rear window was made of safety glass.

Thanks to a double frame it was flush with the outer skin to thus provide an undistorted view towards the rear. An electrohydraulic soft-top mechanism was available as convenient optional equipment, which became part of the standard equipment scope following the facelift in 1993.

The Mercedes-Benz Cabriolet was developed in cooperation with Porsche. Work on the convertible four-seater initially began at Karmann in Osnabrück in 1988. In January 1989 Porsche then took over the development order. The company had been working on a potential Cabriolet for the upcoming model series 202 C-Class up to this point.

Porsche had previously already been awarded an order to carry out development activities relating to a potential Cabriolet variant for the 201 model series Mercedes-Benz compact class.

The two Stuttgart-based automotive companies had already cooperated within the context of the development and production of the Mercedes-Benz 500 E high-performance vehicle. Work on the A 124 was carried out by Porsche at the Weissach site. The Cabriolet was tested for reliability and fatigue strength at Mercedes-Benz and Porsche as part of various endurance tests.

From solitary variant to type family

The 300 CE-24 Cabriolet with a 3-litre in-line six-cylinder engine generating 162 kW (220 hp) premiered in 1991. Its series production launched at the Mercedes-Benz plant in Sindelfingen in March 1992. The model initially remained an elegant and sporty solitary variant within the brand’s model range.

The convertible four-seater had already undergone a facelift by the 1993 model year, which was externally identifiable by elements including the “integrated radiator” that was based on the 140 model series S-Class, front signal lamps with transparent lenses and bumper protection strips in the same colour as the vehicle’s detachable parts.

Driver’s airbag and electrically adjustable outside mirrors on the left and right had by now become part of the standard equipment, while a central locking system and five-speed transmission had already formed part of the convertible four-seaters’ previous standard scope. From that point onwards the vehicle was known as Mercedes-Benz E-Class Cabriolet.

The model range now included a total of four variants with two four- and six-cylinder engines each. The E 200 Cabriolet (100 kW/136 hp) was initially and up until 1994 produced exclusively for export to Greece, Italy and Portugal. Hence, the actual entry-level model in 1993 was the E 220 Cabriolet (110 kW/150 hp). 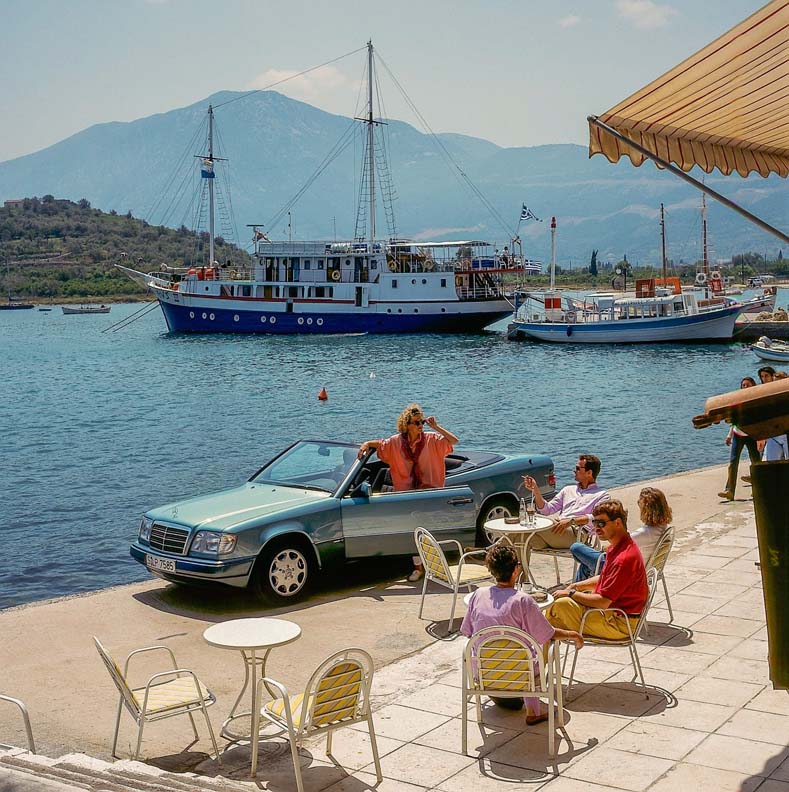 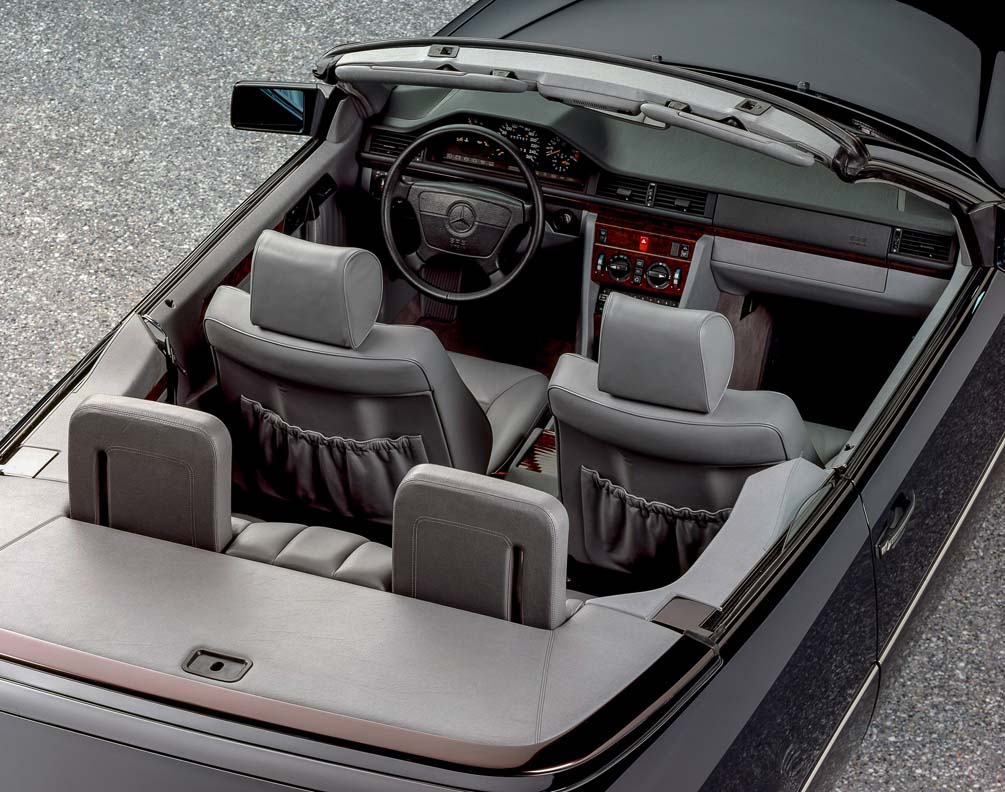 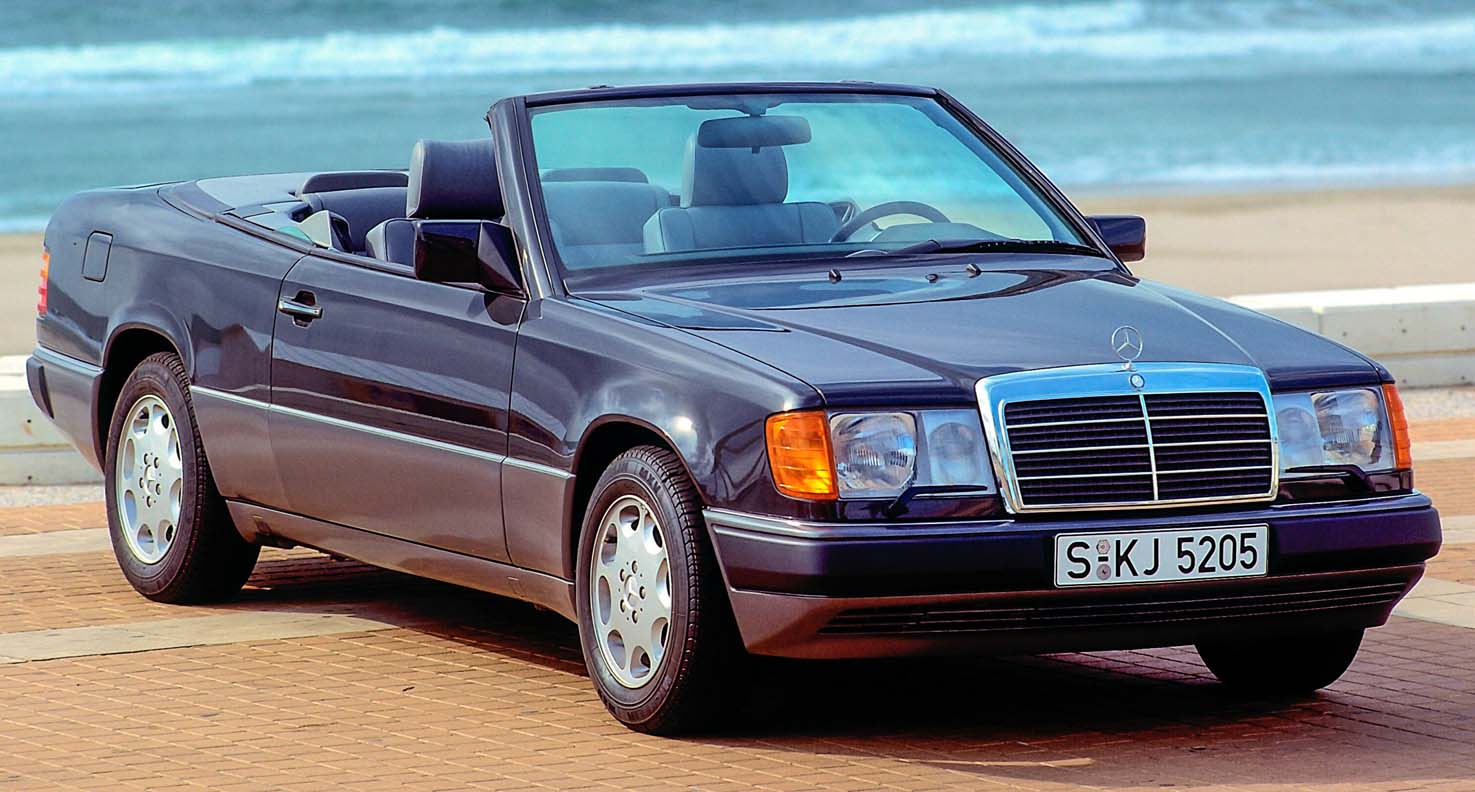 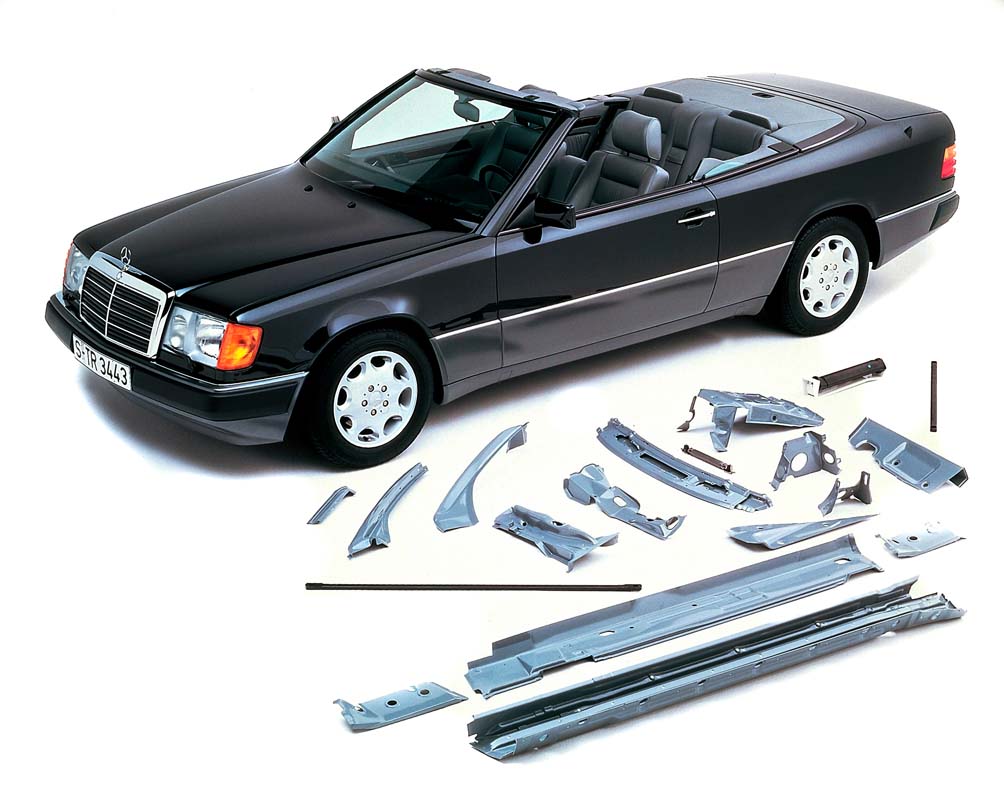 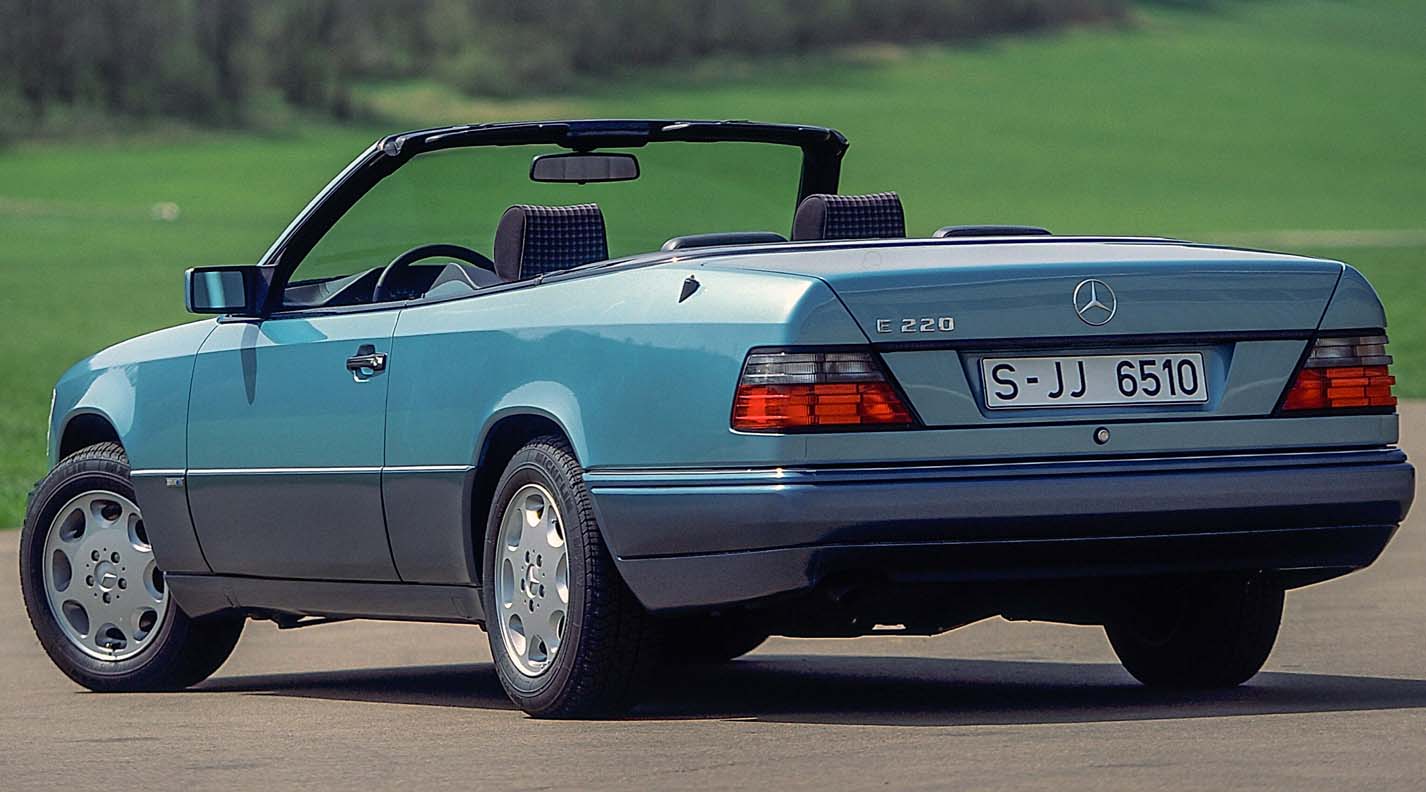 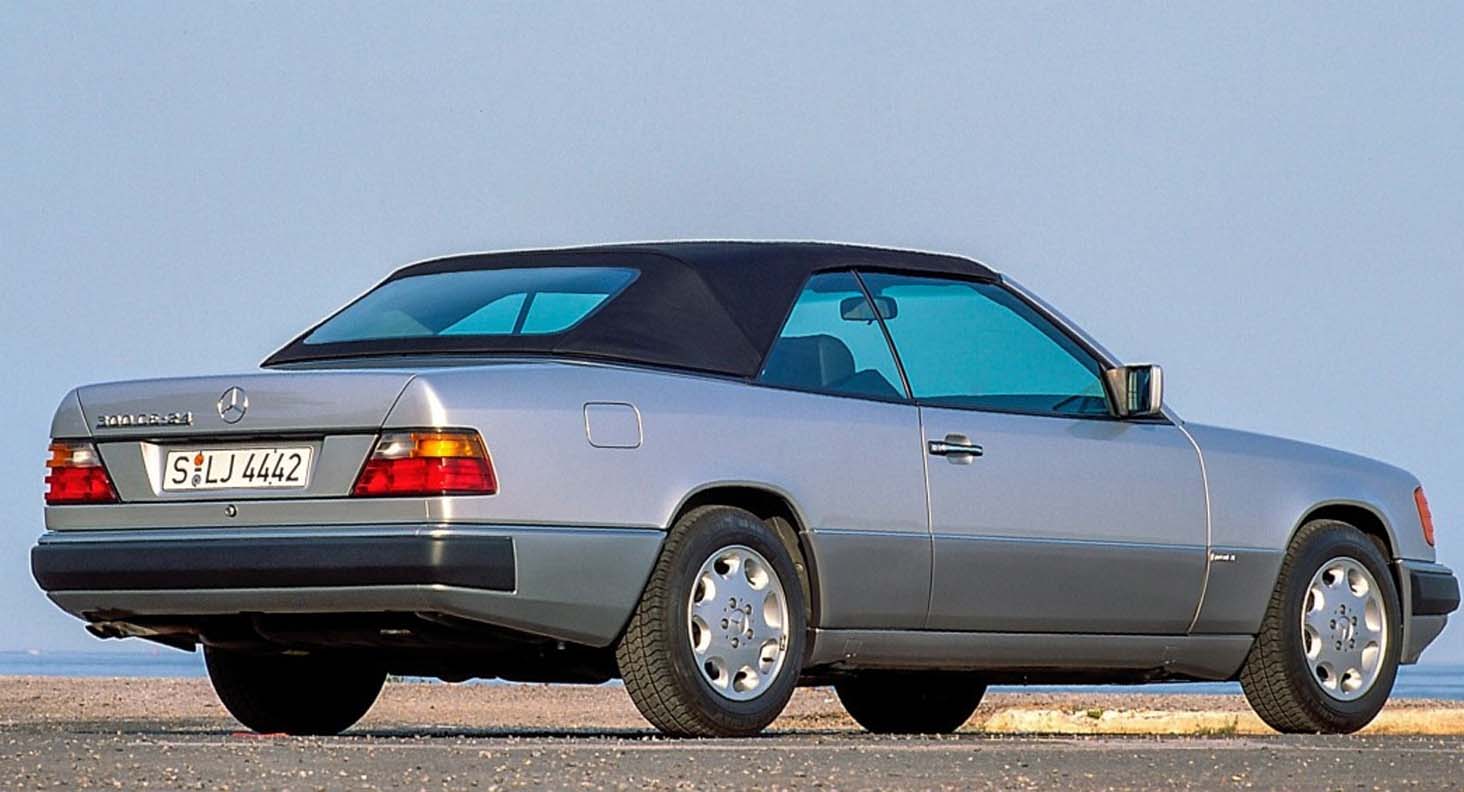 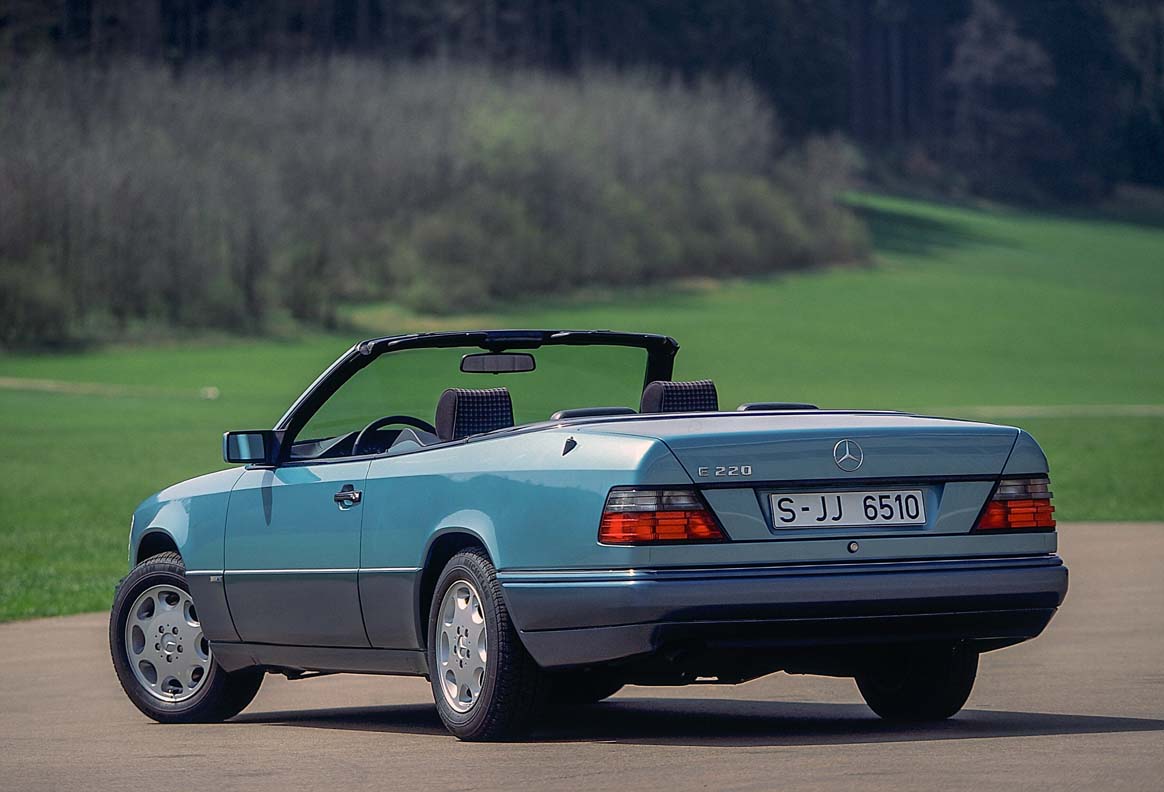 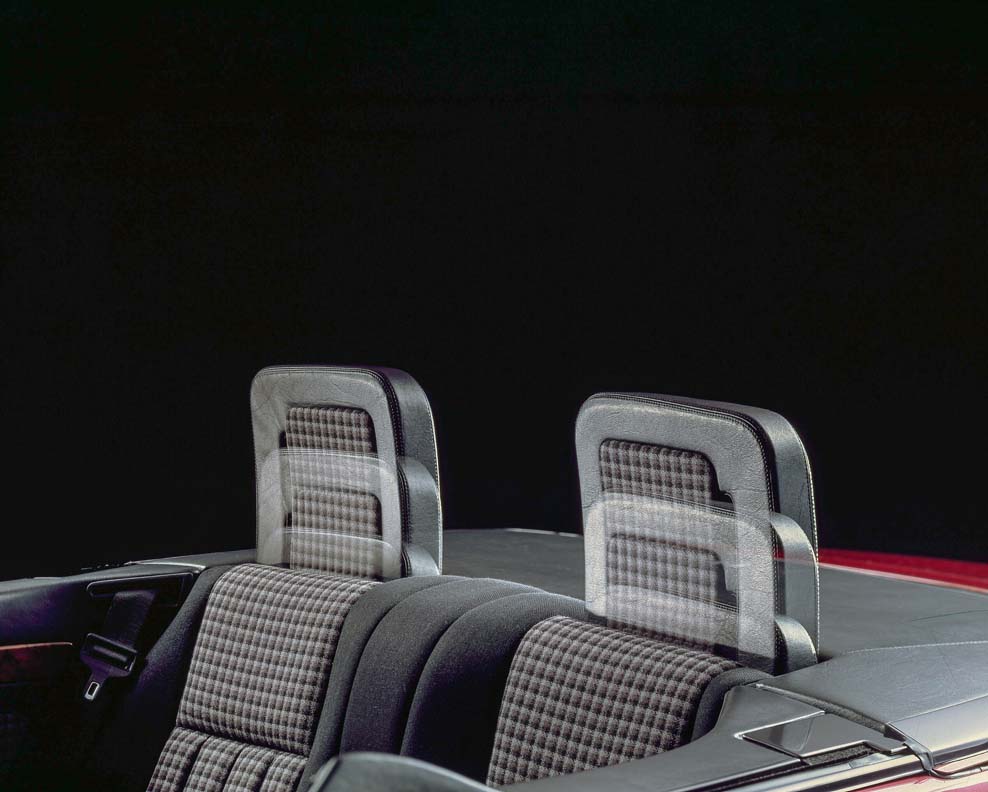 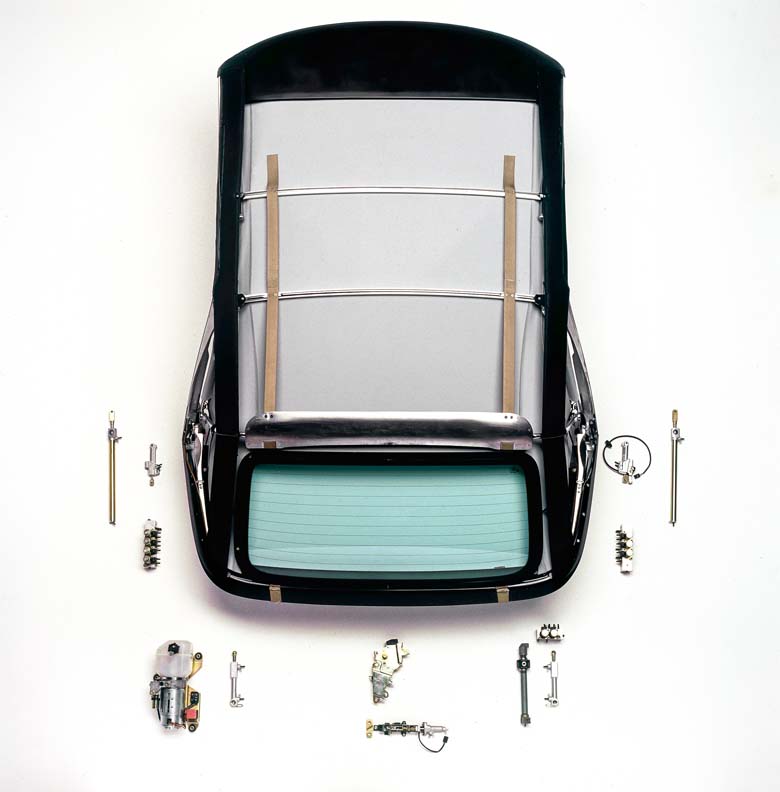 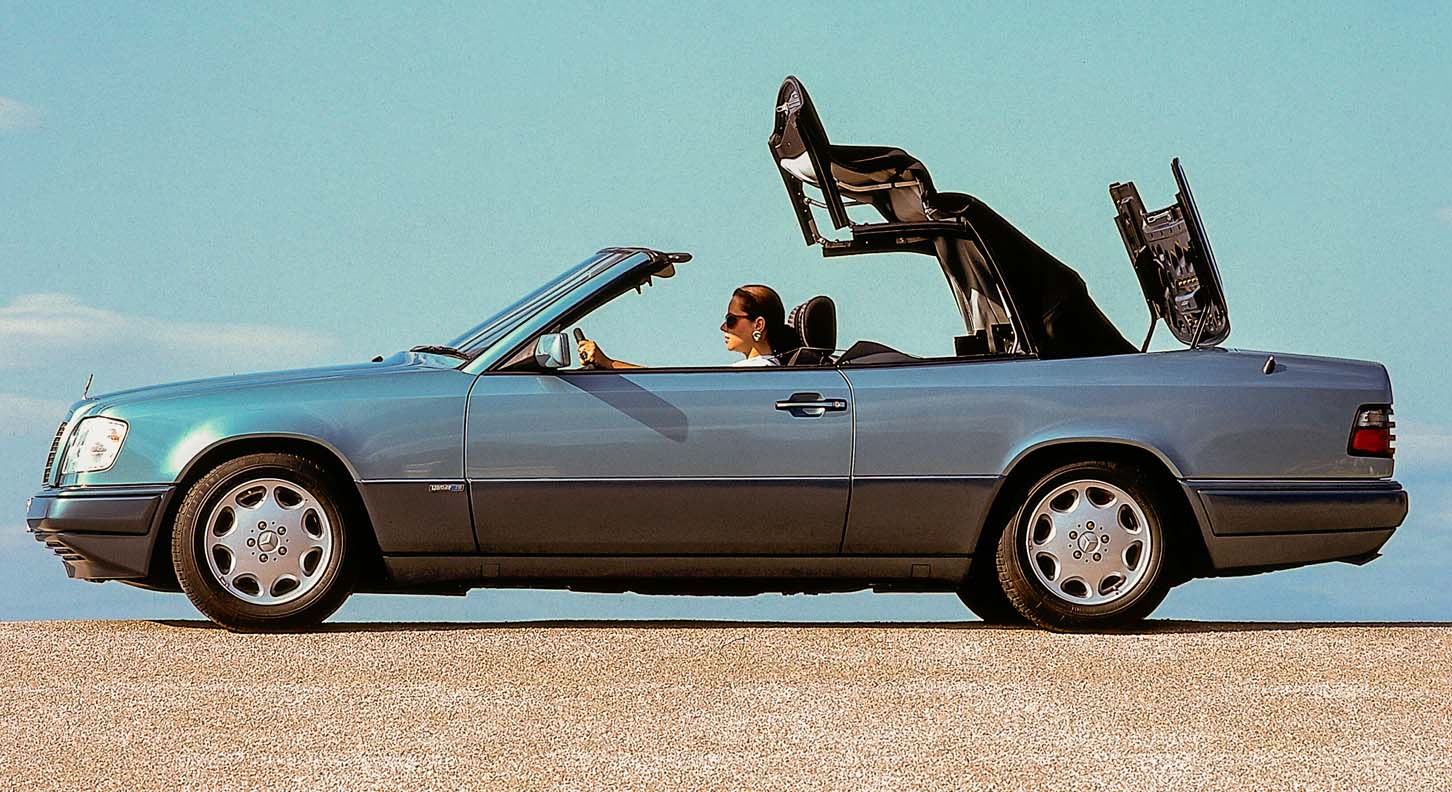 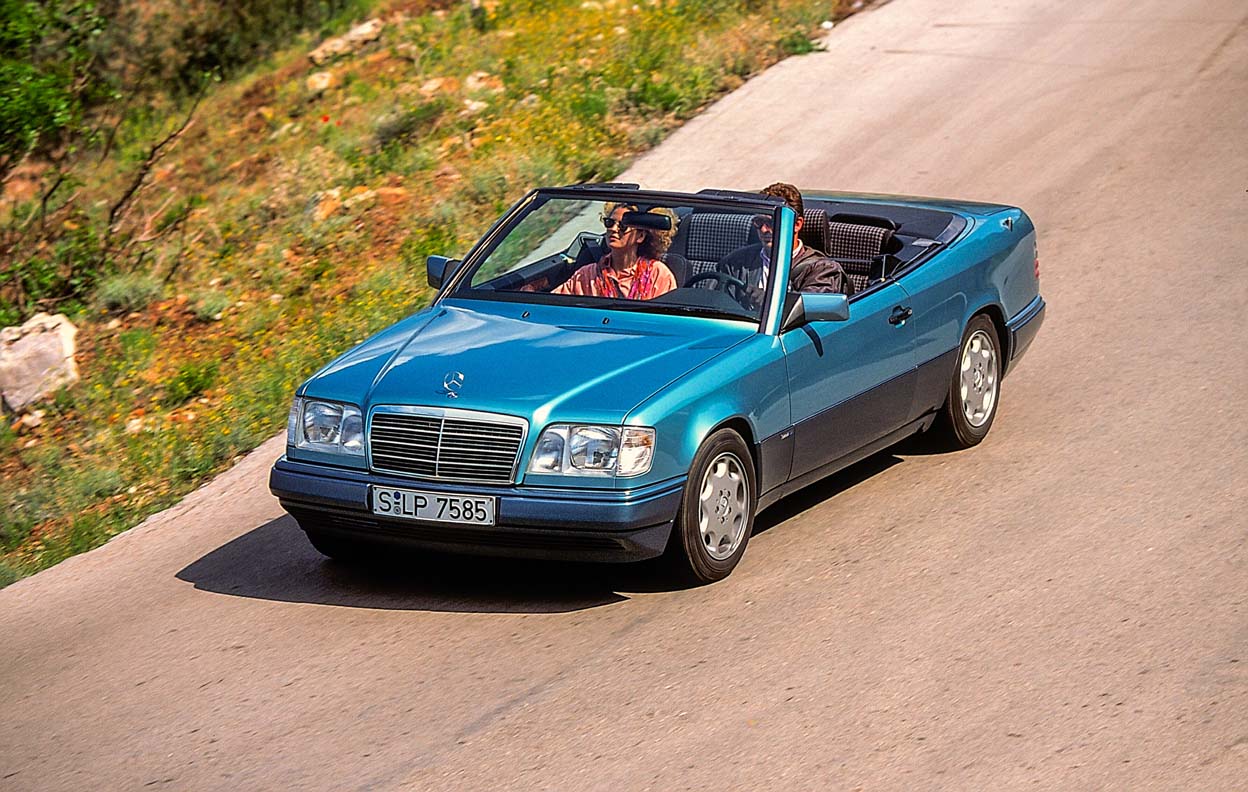 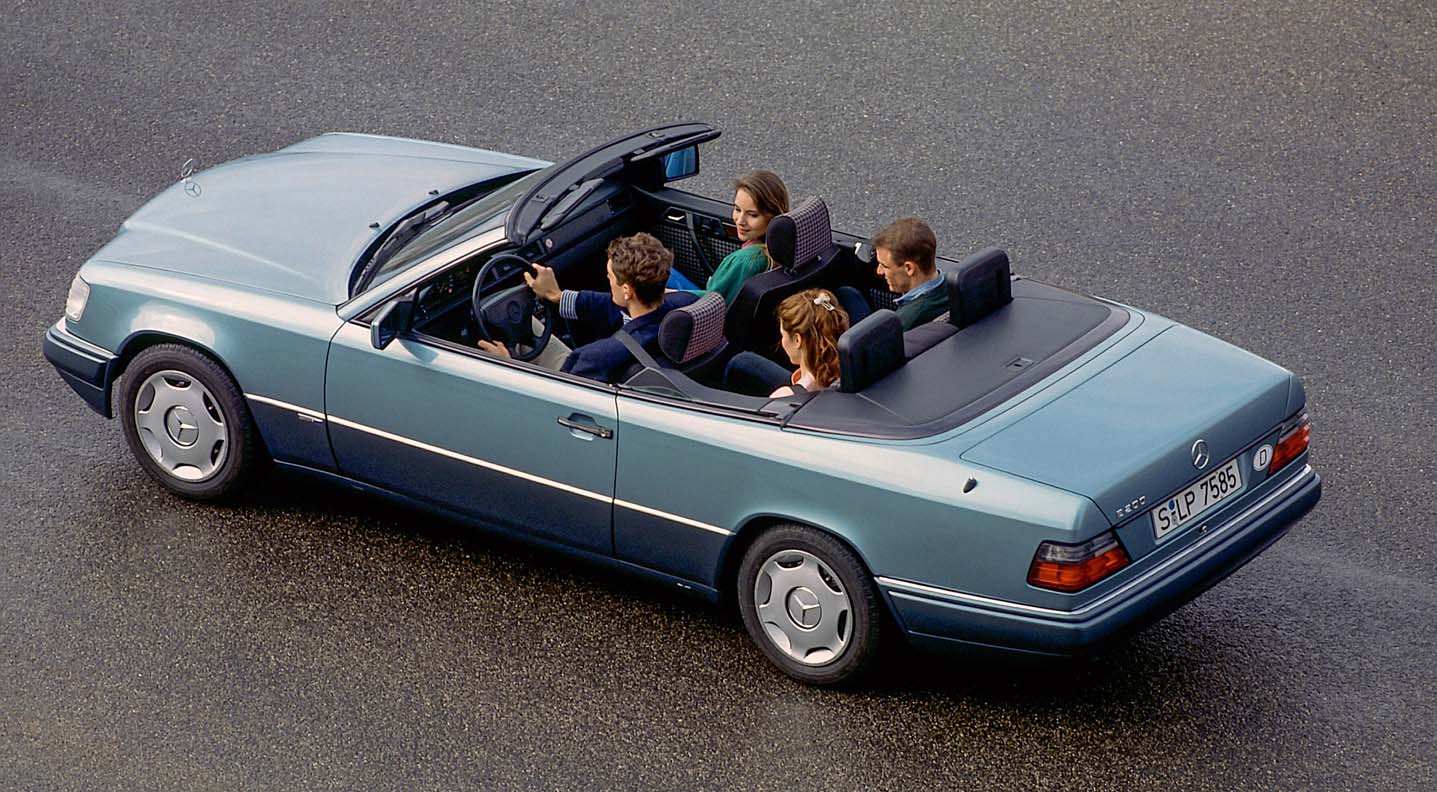