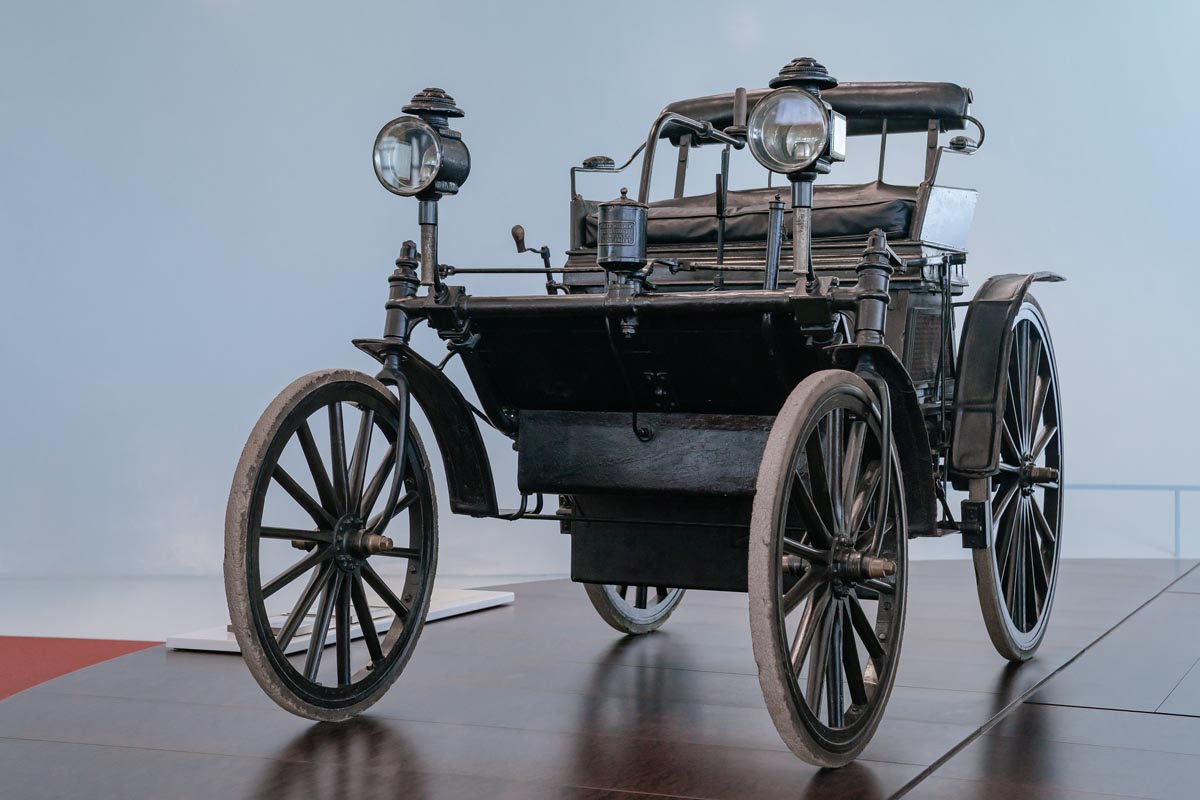 “Close-up” – the name of the series by the Mercedes-Benz Museum says it all. Each instalment tells a surprising, exciting or behind-the-scenes story, shining a spotlight on details of a vehicle, an exhibit or an element of architecture and design. In the spotlight this time: the Daimler Motor Car from 1892.

Discreet: This 130-year-old exhibit looks somewhat inconspicuous in the room housing Collection 4: Gallery of Names of the Mercedes-Benz Museum. The small Daimler Motor Car from 1892 stands right next to two mighty and magnificent Mercedes-Benz 770 “Grand Mercedes” models (W 07) from the 1930s. But it fits in there perfectly. Because it’s the world’s oldest prestige car.

Ultra-modern: It’s up close that you discover its true meaning. The Motor Car was the first car model sold by Daimler-Motoren-Gesellschaft (DMG) – and in 1892 it was a highly exclusive affair. Considering the number actually produced, that is almost an understatement. After all, six years after the invention of the automobile, only a few select customers were able to enjoy this innovative mode of transport. By 1895, DMG had built just twelve Motor Cars. Nevertheless, it was a start.

Programmatic: The vehicle – which looks simple from today’s perspective with its box-shaped body and open bench seat on four wooden wheels, the front ones slightly smaller – sent out a strong signal, and its name said it all. It looked like a carriage and yet did not need harnessed horses at all. Thus, even in this early phase of development, automobility as a prominent form of locomotion became clear. This fascination immediately gripped important decision-makers.

Celebrities: 130 years ago, it was an illustrious clientele that was interested in this innovative mode of transport. “Sultan, Morocco” was the very matter-of-fact first entry in the DMG order book in 1892: as the company’s first customer, Mulai al-Hassan I received a Daimler Motor Car. The ruler of Morocco from the Alawid dynasty reigned from 1873 to 1894. Before he received the innovative vehicle from Cannstatt, he appeared before his subjects on noble horses. 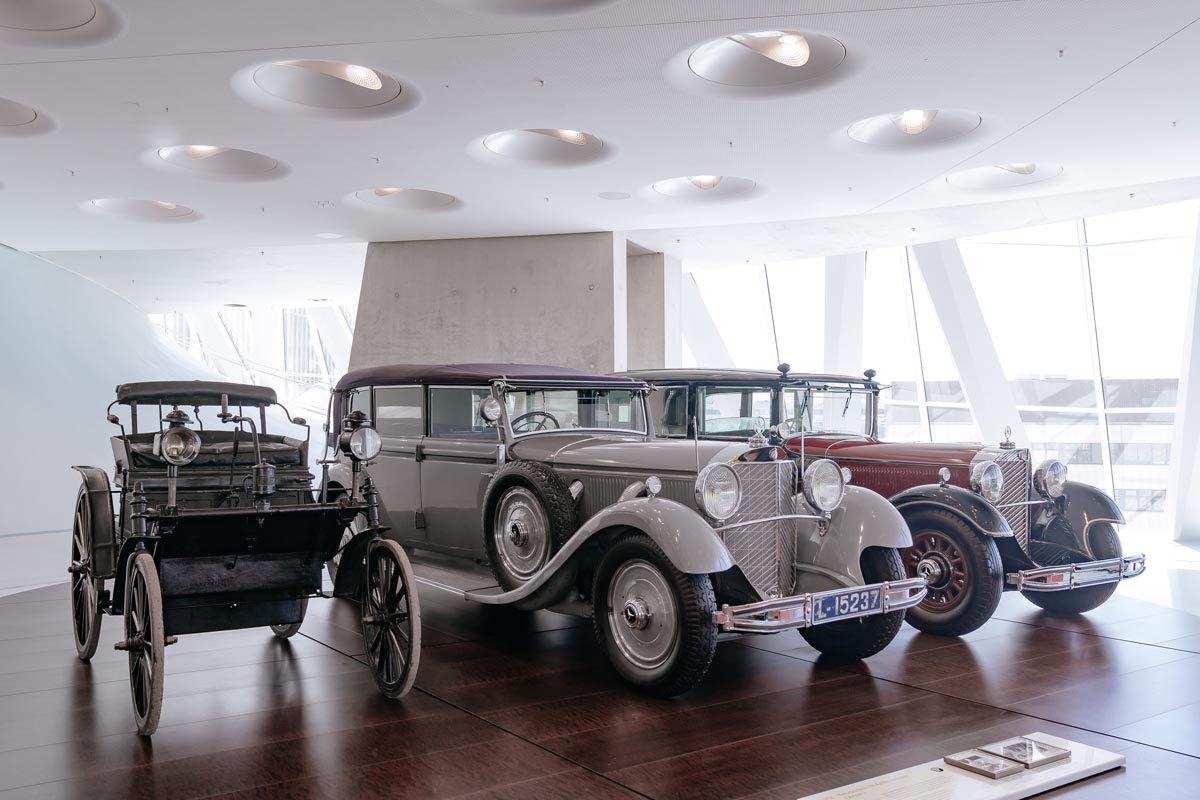 Point of interest: The fact that the ruler became one of Daimler’s very early customers with the purchase of the Motor Car fits in with the brand’s history. The Cannstatt-based company offered a product to meet the most exacting of demands in 1892. Thus, this automobile also laid the foundation for the history of Mercedes-Benz as the world’s oldest luxury car manufacturer. Just one year later, the competing Benz & Cie. in Mannheim also entered the race for customers with the Victoria.

Individual: The automobile delivered to the Sultan on 31 August 1892 looked somewhat different to the vehicle on display in the Mercedes-Benz Museum, as documented by the photo next to the exhibit description. The climate in Morocco required a sun canopy, and so it was given an ornate canopy of velvet as well as gold thread tassels and ebony trim as further special refinements. Clearly, more choice in terms of automotive features was not possible 130 years ago.

Inventive: Both the front and the rear of the vehicle in the Museum bear clearly visible manufacturer’s badges from Daimler-Motoren-Gesellschaft in Cannstatt. The engine is inconspicuously built into the body, which was made by Stuttgart coachbuilder Otto Nägele. Visible identifying features of the Motor Car include the steering rack in front of the seat, a large gearwheel with a solid chain drive between the rear wheels and other mechanical elements. Resourceful: the coolant circulated through the steel pipes of the vehicle frame. An external block brake provided deceleration, acting on the wheels with solid rubber tyres from “Hamburger Gummiwerk”.

Powerful: Chief designer Max Schroedter developed the Motor Car from Gottlieb Daimler’s and Wilhelm Maybach’s steel-wheeled car of 1889 – hence the common nickname “Schroedter car”. The new product had a two-cylinder engine with a displacement of 1,060 cubic centimetres, which produced 1.47 kW (2 hp) at 700 rpm. Power was transmitted courtesy of a three-speed gearbox and a rear-axle differential. The top speed was 18 km/h.

Bulk purchase: The top speed may not have been much from today’s perspective. But 130 years ago it was not only a speed as such, but also proof of the combustion engine’s efficiency. Mulai al-Hassan I was apparently so enthusiastic about this that he did not stop at the Motor Car: he also received a boat with the new motor drive from DMG on 31 August 1892. Topping this impressive level of innovation was scarcely imaginable at that time. 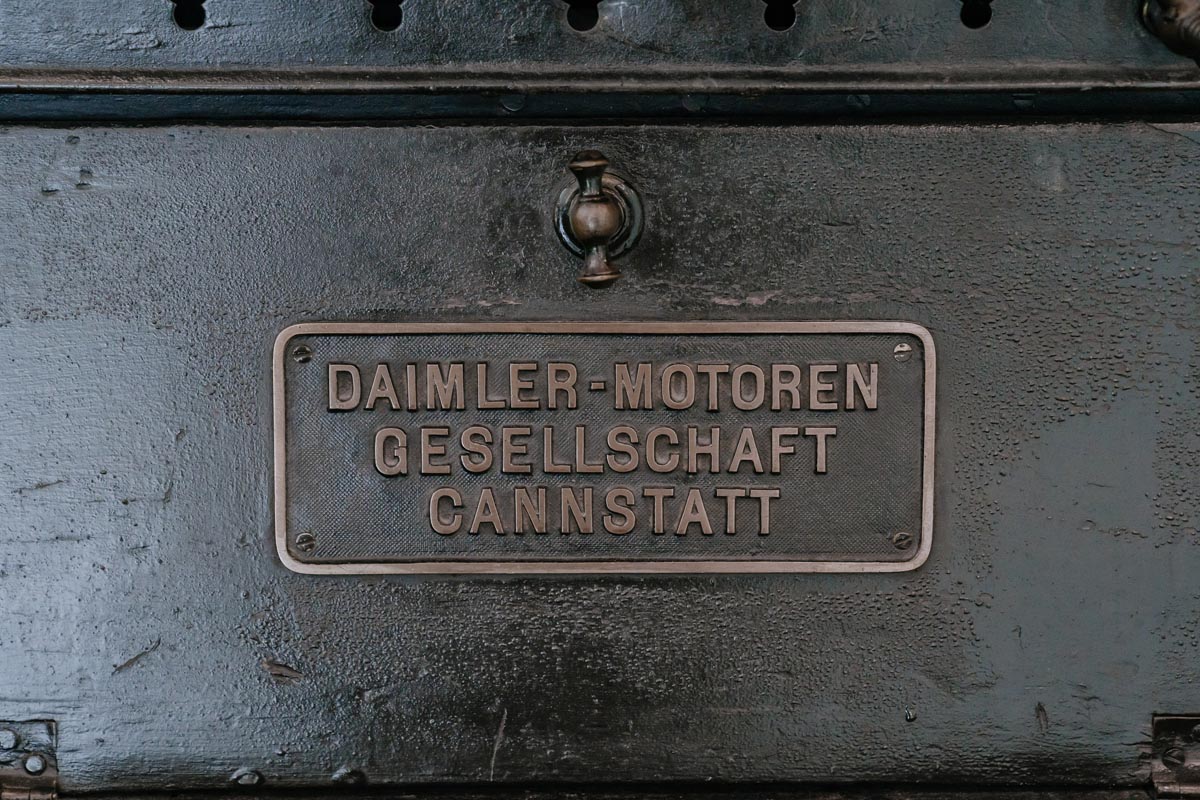 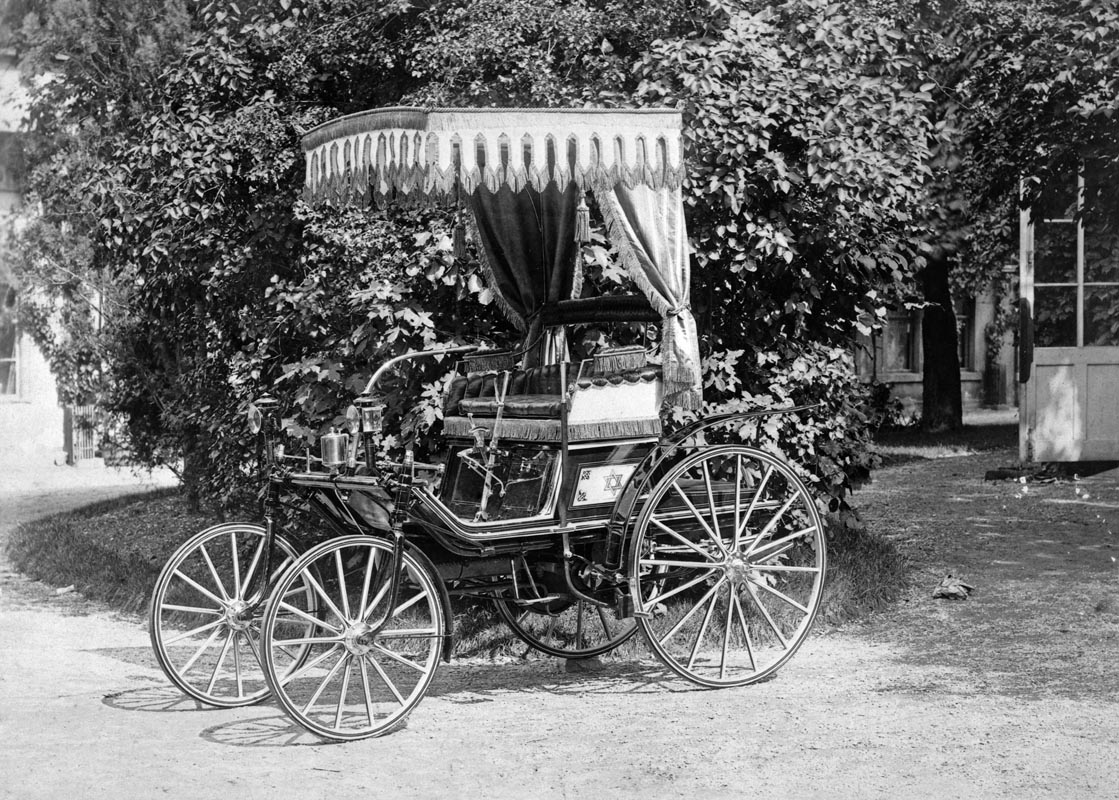 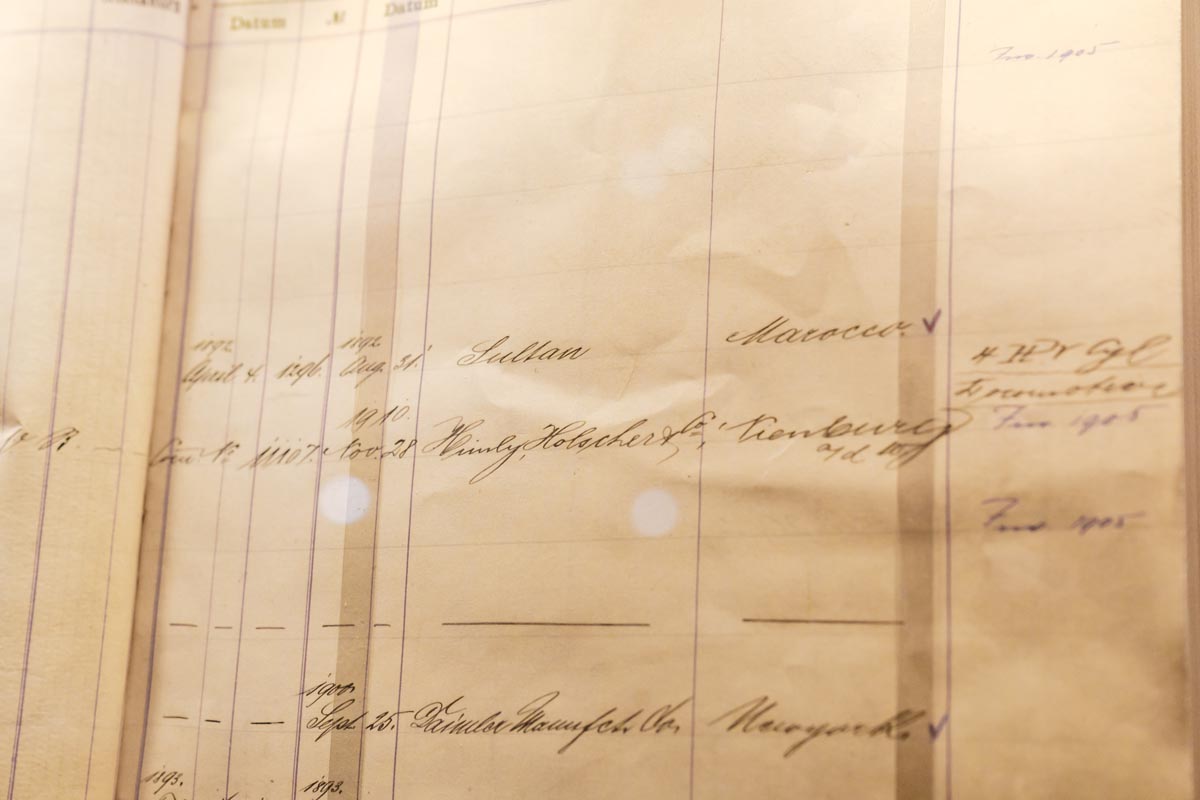 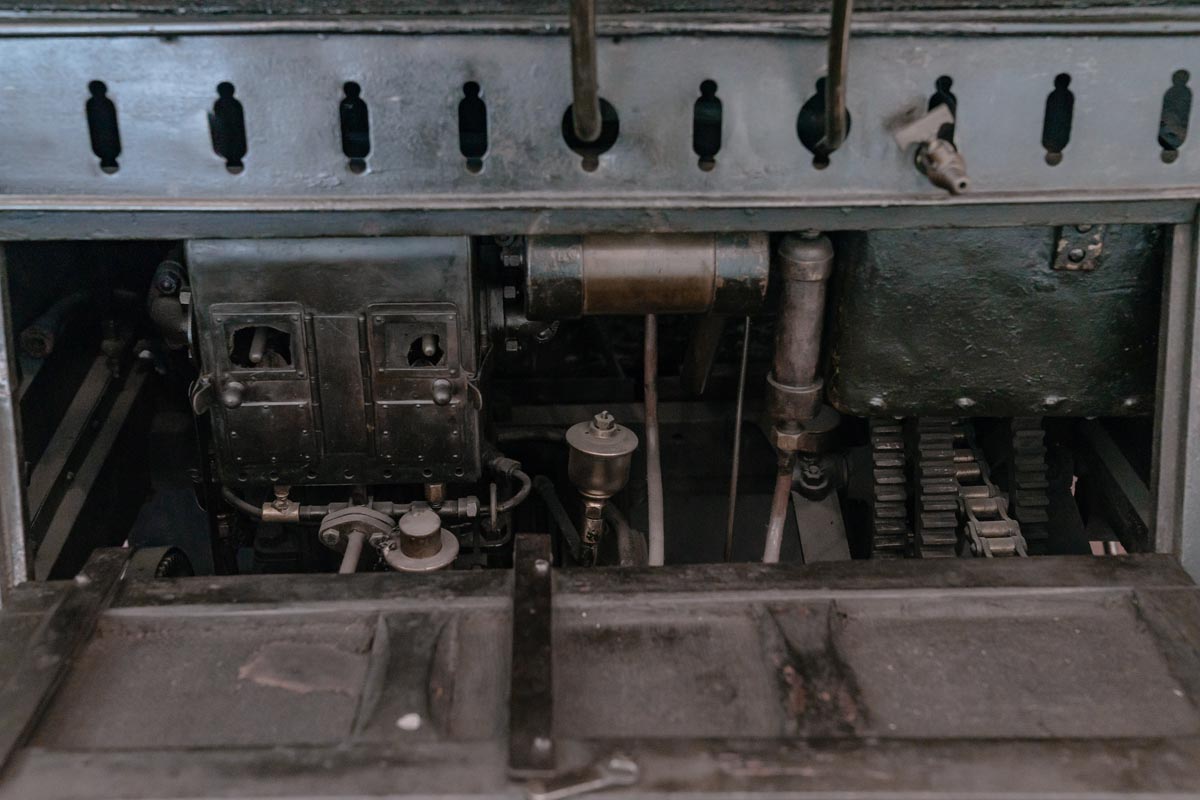 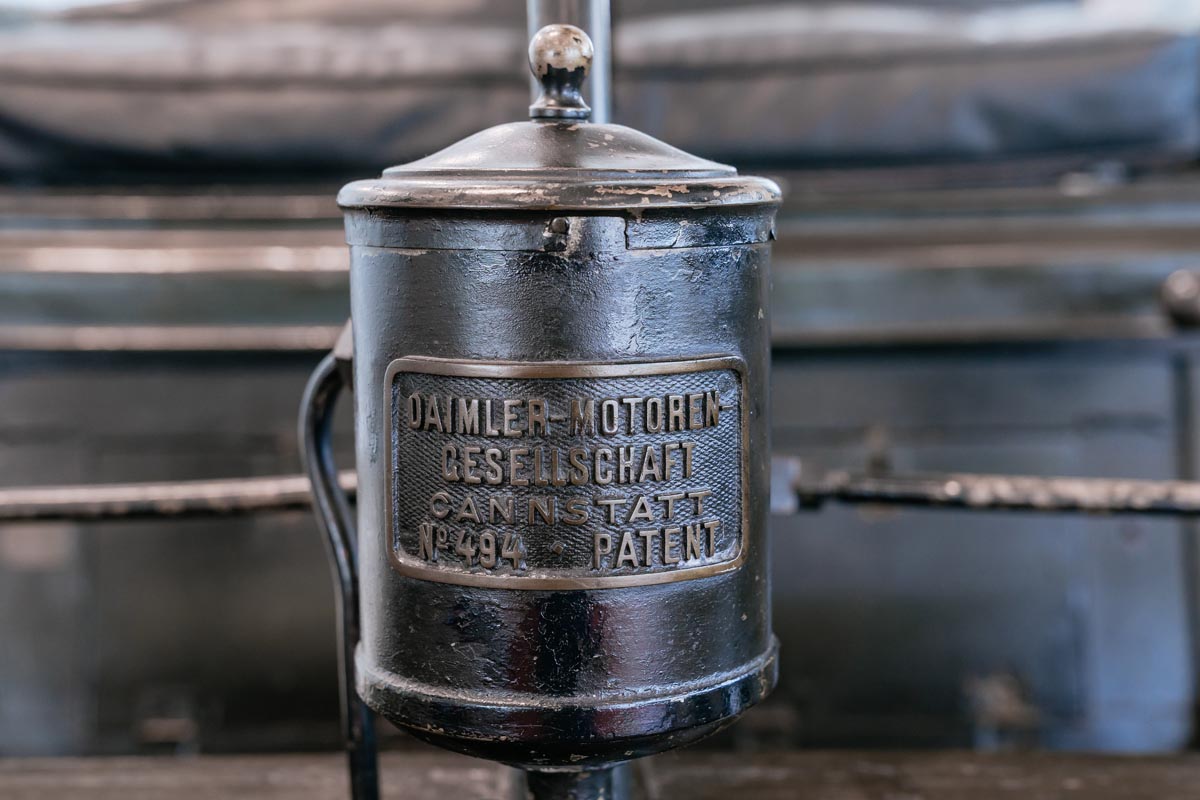 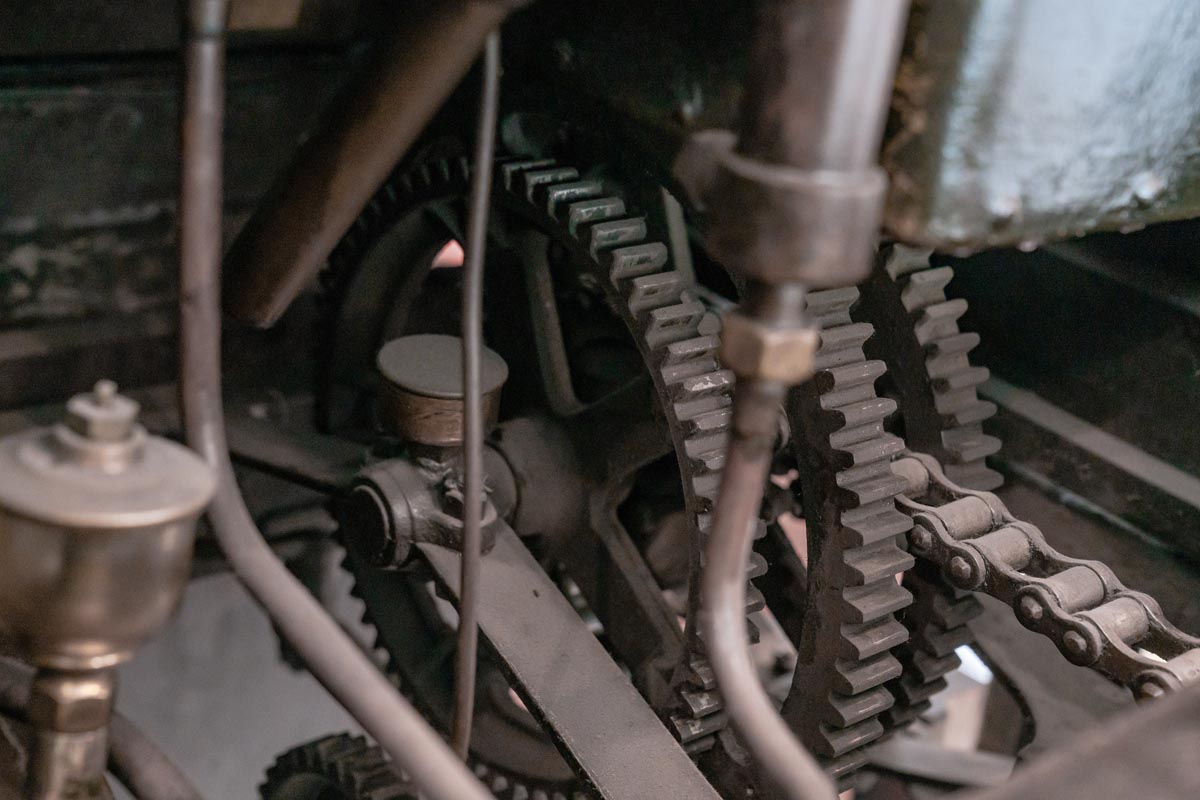 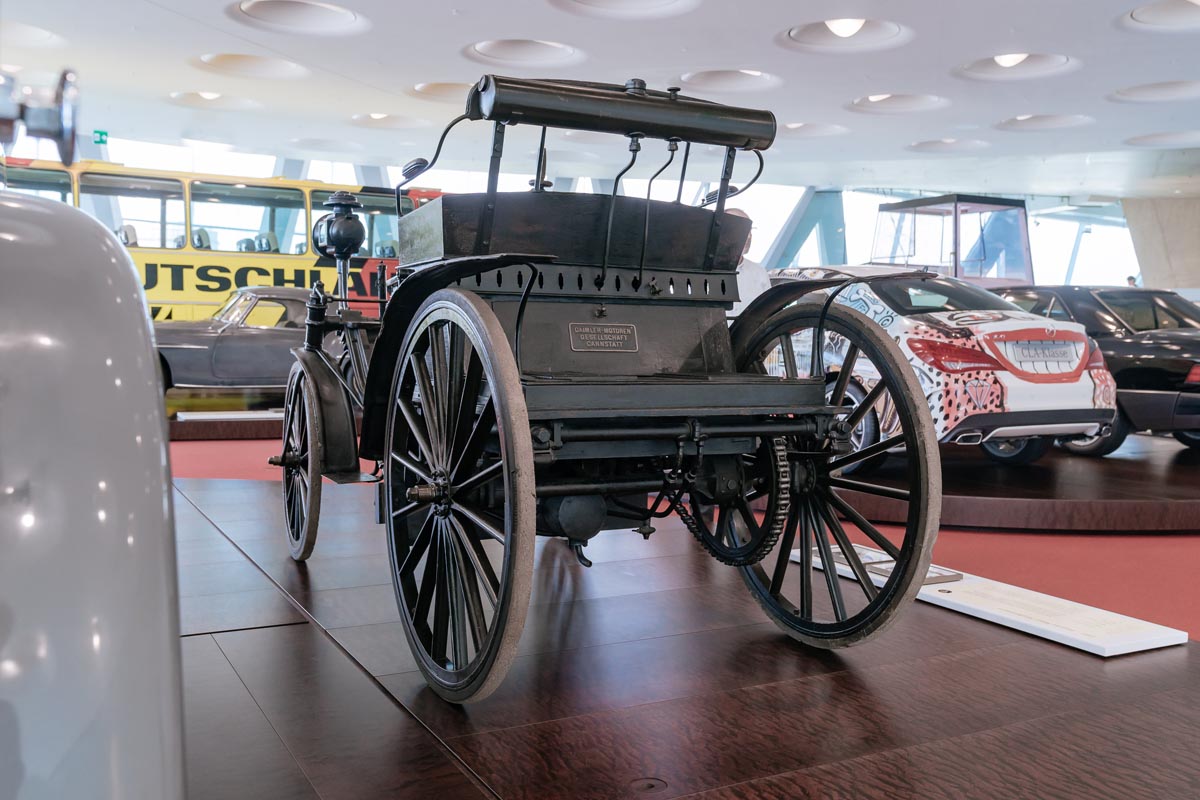 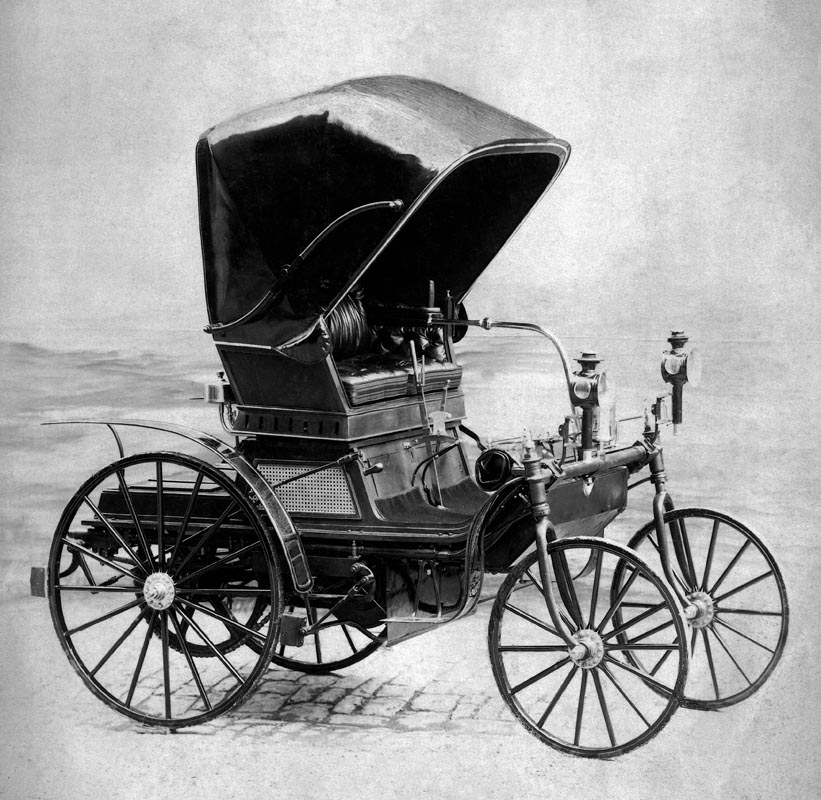 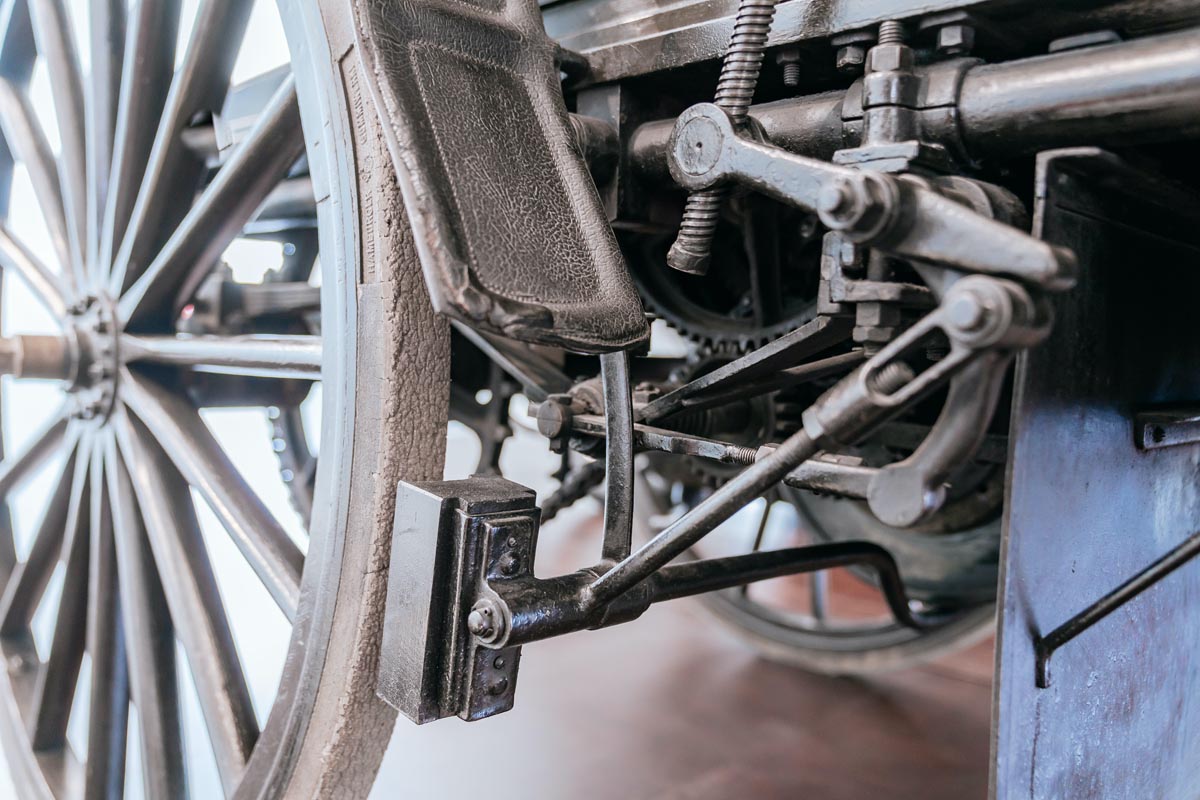 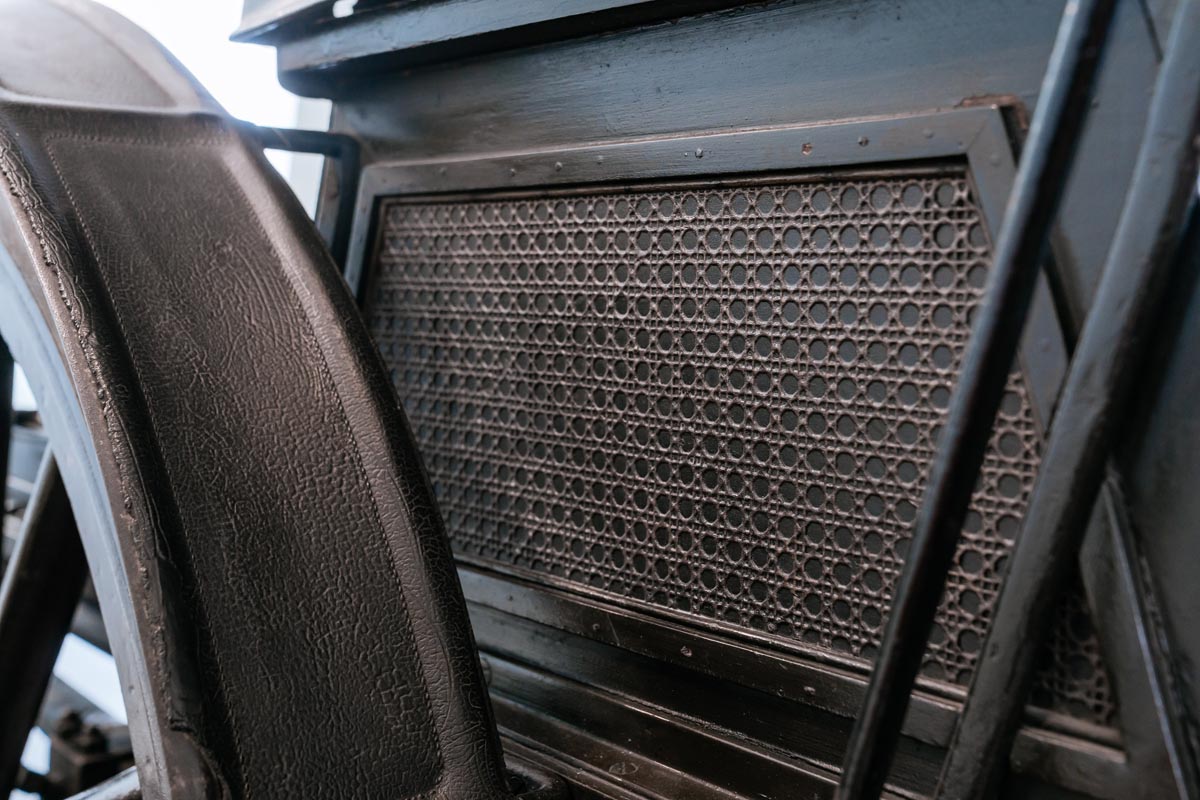 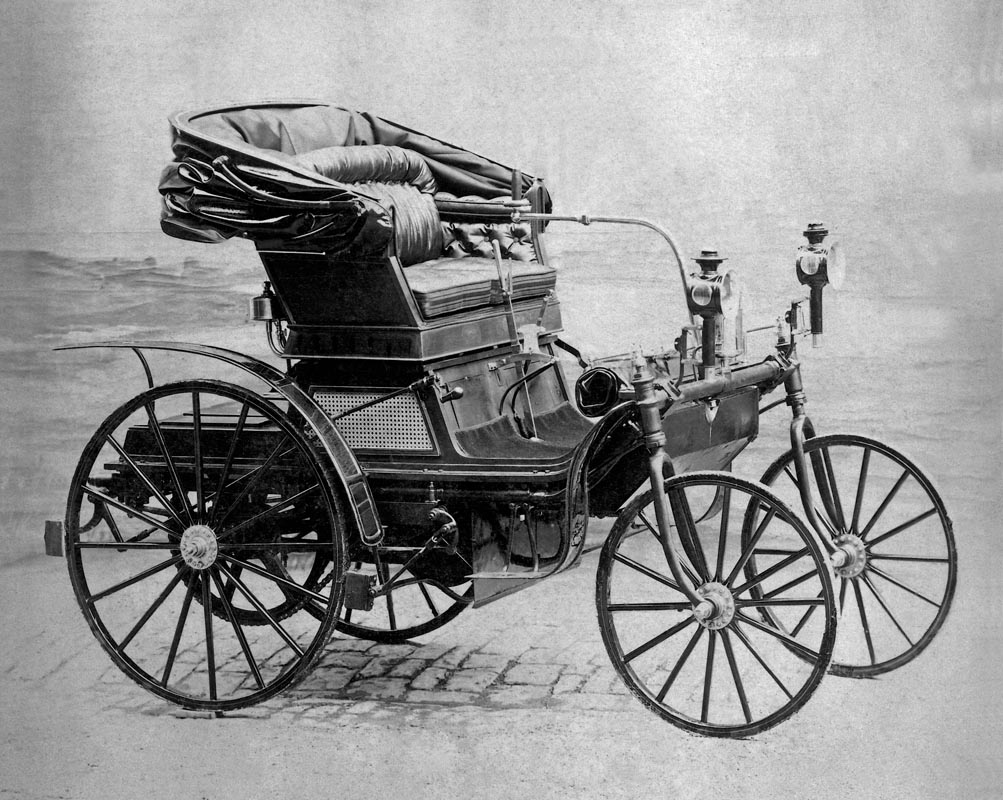 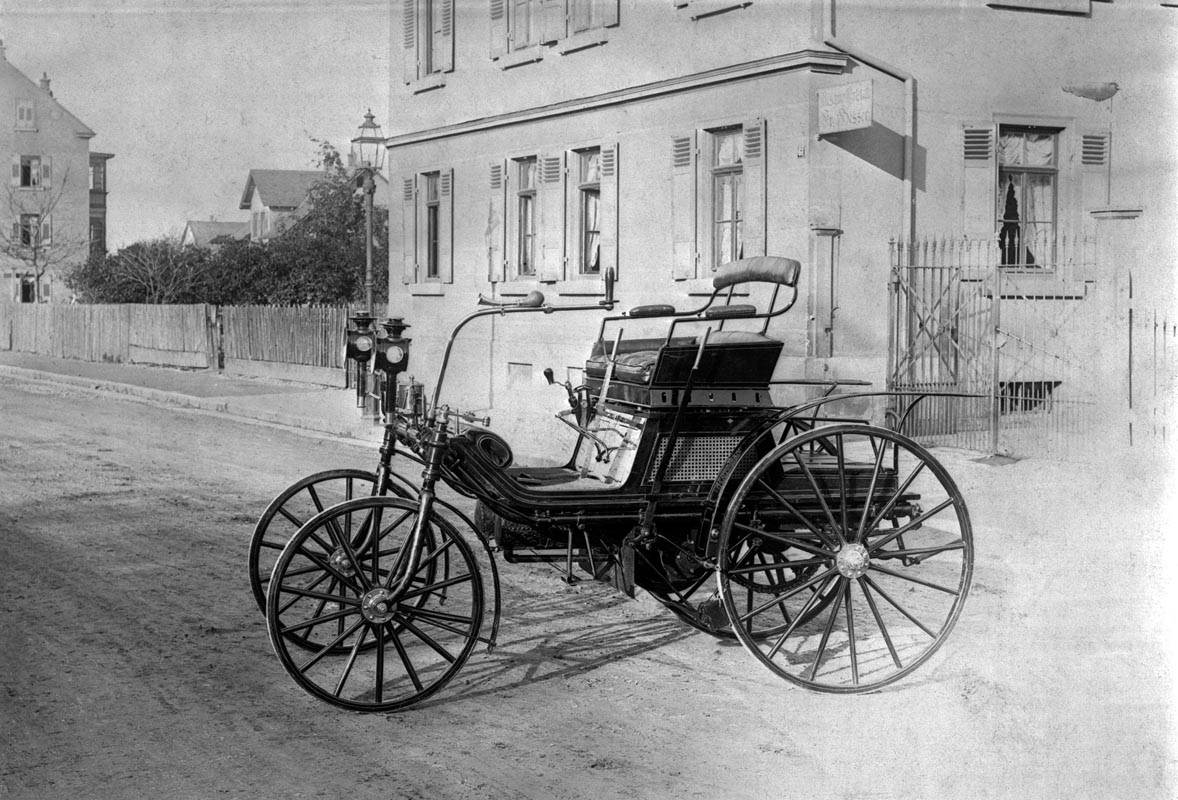