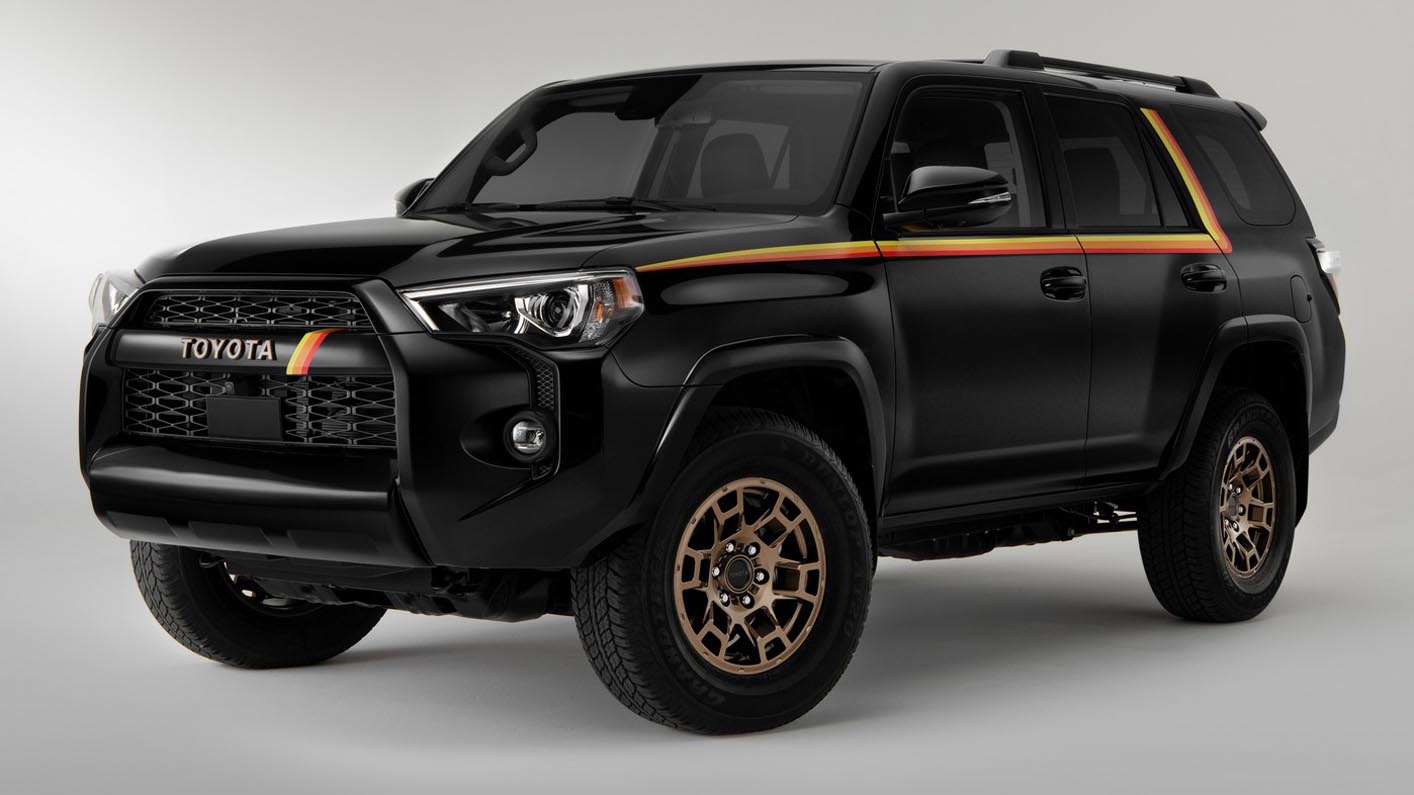 Forty candles. The “big four-0.” The Toyota 4Runner will reach the 40-year mark with the 2023 model year… and, to celebrate, Toyota is offering a distinctive 4WD-only 2023 4Runner 40th Anniversary Special Edition. Appropriately, Toyota will make 4,040 of these special editions available for the U.S. market. Over the past four decades, 4Runner has amassed more than 4 million cumulative sales while carving out its place as the ready-for-anything SUV that’s equally at home on pavement or trail.

The 2023 Toyota 4Runner 40th Anniversary Special Edition is based on the SR5 Premium grade and will be available in three colors: White, Midnight Black Metallic and Barcelona Red Metallic. It will stand out from the lineup thanks to bronze-colored 17-inch alloy wheels, a body-color-matching TOYOTA heritage grille and a bronze-colored 40th Anniversary exterior tailgate badge.

The biggest eye-catcher, though, is likely to be the heritage graphics package created especially for this anniversary model. The first 4Runner was built on the Toyota pickup platform, which itself founded the heritage of Toyota’s illustrious success in off-road racing. As an homage to those early racers, the 4Runner 40th Anniversary Edition will be wearing some very cool, retro-inspired yellow/orange/red body graphics.

Fun facts: When the first 4Runner arrived, “Star Wars: Return of the Jedi” was the top-grossing movie in America, and “Every Breath You Take” by the Police had ended the year at #1 on the Billboard 100. (Yep, that was then “Jedi” was the third Star Wars movie, not “Episode Six.”)

A 4Runner for All Seasons and Reasons

The TRD Off-Road and TRD Off-Road Premium grades are distinguished by color-keyed bumpers and overfenders, hood scoop and silver-colored painted front and rear bumper accents. “TRD Off-Road” badges adorn the C-pillars. The Limited is the only 4Runner with a chrome-plated grille insert and chrome-finished exterior trim. All 4Runner models have LED fog lights as standard equipment, with the TRD Pro featuring Rigid Industries LED fog lights.

The 4Runner’s inherent strength starts with its tough-as-nails, body-on-frame construction featuring a four-link rear axle and coil-spring suspension. The robust chassis is also the foundation of 4Runner’s comfortable ride quality.

The 2WD 4Runners provide an ample 9.0 inches of ground clearance, while 4WD models offer an even more generous 9.6 inches. All 4Runner 2WD models feature standard Automatic Limited Slip Differential (Auto LSD), a function of the traction control (TRAC) that allows some wheel slippage to help the vehicle dig out from sand or snow, for example.

The available part-time 4WD system uses Active Traction Control (A-TRAC) and bolsters off-road capability with a two-speed transfer case with selectable low-range. By distributing drive force to any one wheel in contact with the ground, A-TRAC can help maintain traction when it senses wheel slippage occurring on terrain irregularities and slippery patches. 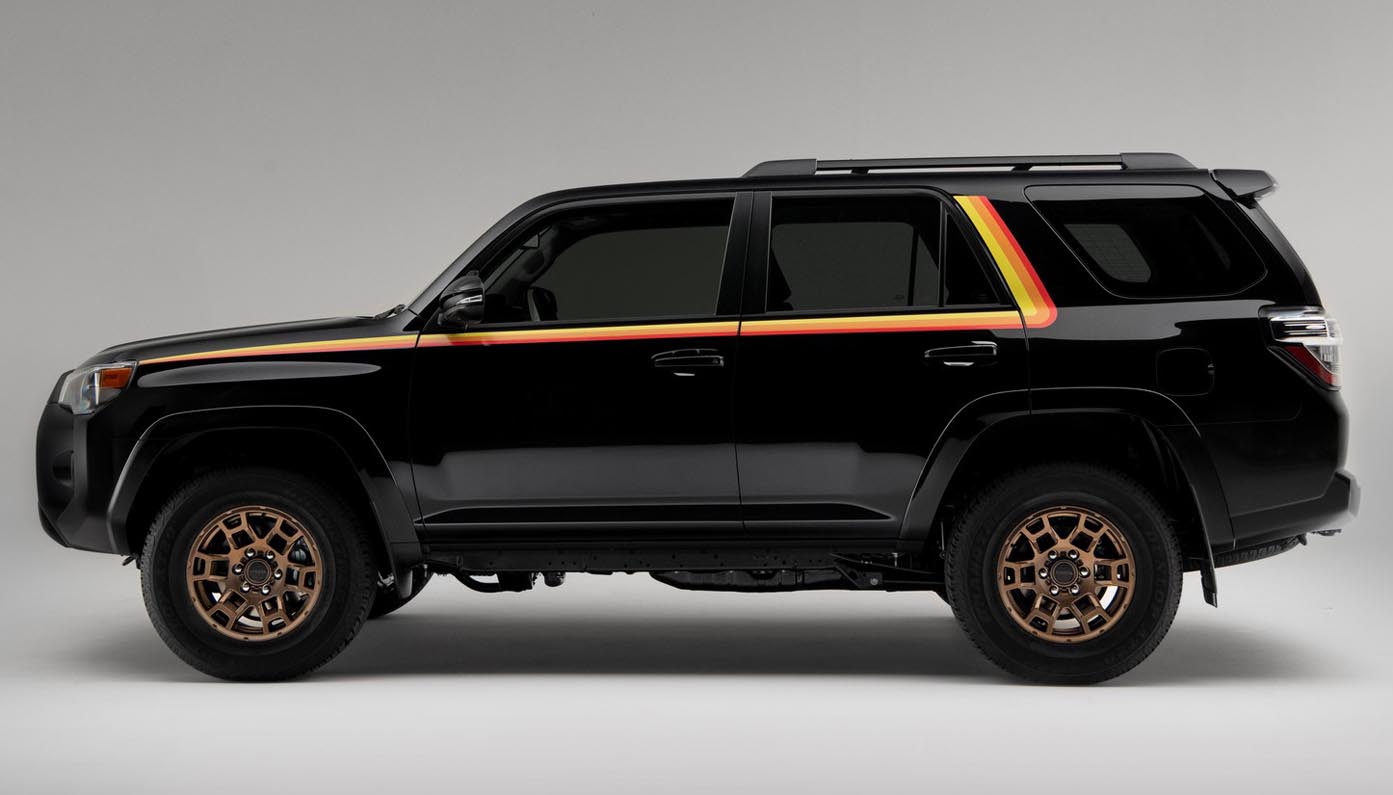 As trail conditions change, the driver can adapt the vehicle using the standard Multi-Terrain Select system using a dial (located overhead along with CRAWL settings) to choose a mode that matches prevailing surface conditions. The system will then adjust wheel slip control accordingly.

Both 4Runner TRD Off-Road and TRD Pro feature the Multi-Terrain Monitor on the list of off-road tech features. Using strategically placed cameras, the system lets the driver check surroundings on the trail, with the ability to spot potential obstacles not easily seen from the cabin. The TRD (and Limited) models also add a premium Multi-information Display.

The 4Runner TRD Sport grade, which first joined the line for 2022, focuses less on the trail and more on road-focused features while adding style and flair. For an emphasis on everyday comfort and road dynamics, the 4Runner TRD Sport employs the Cross-Linked Relative Absorber System (X-REAS) suspension to enhance on-road handling. The X-REAS system adjusts the damping force of shock absorbers when driving over bumpy surfaces or when cornering. A center control absorber cross-links the shock absorbers on opposite corners of the vehicle, like an “X,” to help reduce pitch and yaw by offsetting opposing inputs.

The TRD Sport gets its own look with color-keyed accents on the grille, rocker panels and body molding, plus the signature TRD-style hood scoop and a front spoiler and black roof rails. Inside, TRD Sport replaces the SR5 grade’s cloth seat surfaces with power-adjustable black SofTex-trimmed seats. The seats feature unique gray-colored contrast stitching, and the front headrests have gray-colored TRD stitched logos. TRD Sport floor mats are included, and a standard TRD shift knob completes the cabin makeover.

The TRD Pro badge on any Toyota truck or SUV signifies the most off-road-capable vehicle in its respective Toyota lineup. The 2023 4Runner TRD Pro is also a bold looker, offering Solar Octane, White, Magnetic Gray Metallic and Black color options. Leading the way for off-road upgrades are some of the features not as easily seen, because tucked away at each corner are specially tuned Fox internal bypass shocks and TRD-tuned coil springs yield an inch of front lift for improved trail-tackling capability. The rear Fox shocks feature piggyback-style remote reservoirs to maintain damping performance over demanding off-road terrain. Delivering the best of both worlds, the shock tuning improves trail driving isolation and high-speed performance without compromising on-road comfort and steering response.

A standard TRD-branded cat-back exhaust gives this trail star a powerful-sounding growl for the V6 engine. Inside, the TRD Pro features upgraded HVAC controls like those found in the Limited grade, plus a standard moonroof and Premium Audio with JBL speakers and Clari-Fi™ technology for enhancing digital music formats.

For 2023, TRD Pro will offered in the exclusive exterior color of Solar Octane, which is available alongside staples Black, White and Magnetic Gray Metallic.

On and Off-Road Suspension

Adventure Expert With Emphasis on Safety

For the 2023 model year, Blind Spot Monitor + Rear Cross Traffic Alert is standard on all grades. All models have standard LED high beams, in addition to the LED low beams and fog lights on most grades.

Space for People and Gear

The 4Runner SR5 and Limited grades offer available third-row seating, with a split 50:50 seat that folds flat. When so equipped, the 40:20:40 second-row seat has a one-touch walk-in function to provide easy access to the third row. The seats can be folded from the side or at the rear, using separate one-touch levers. The second-row seats, which include a center armrest, individually recline up to 16 degrees in four steps.

Toyota Value from Bumper to Bumper 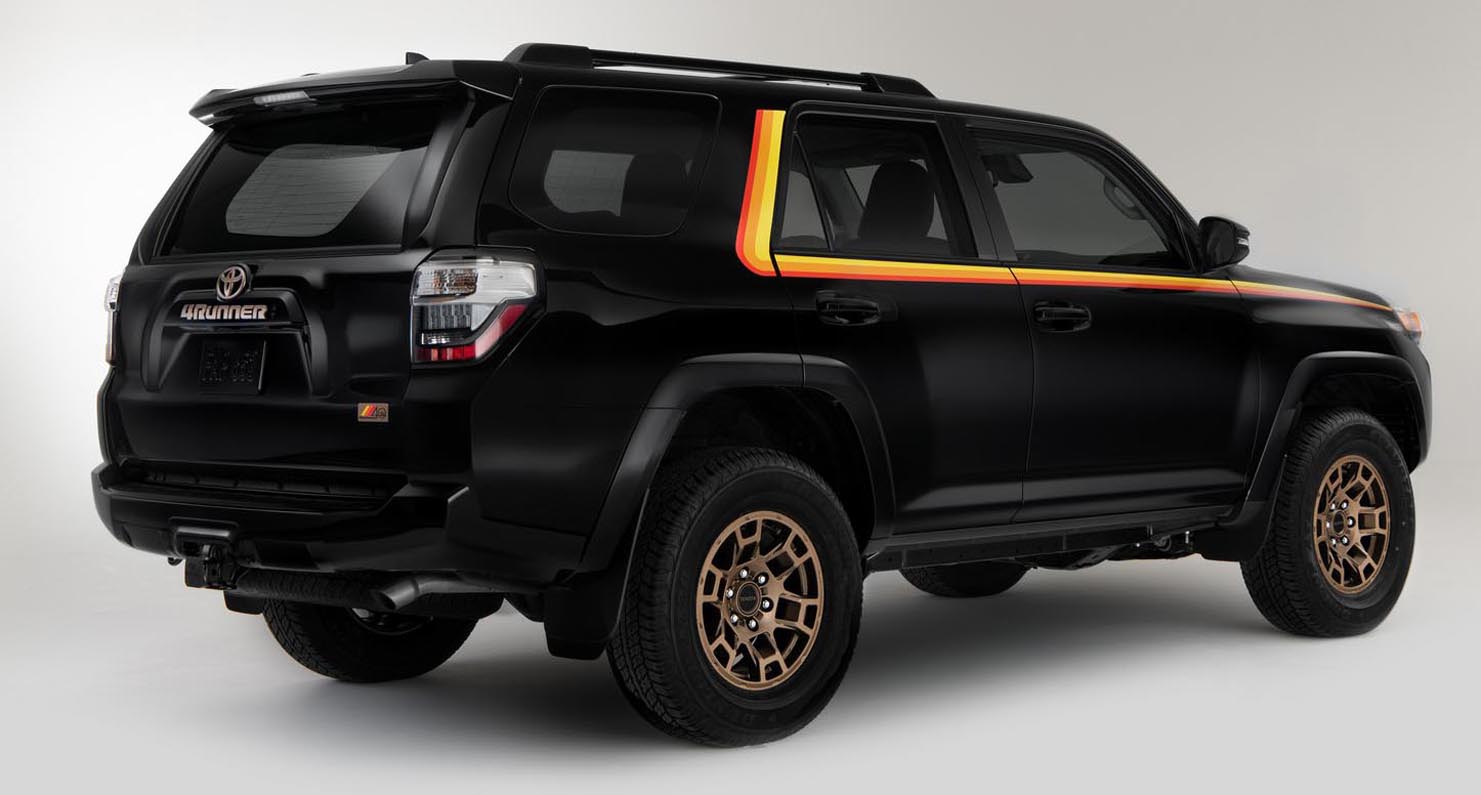 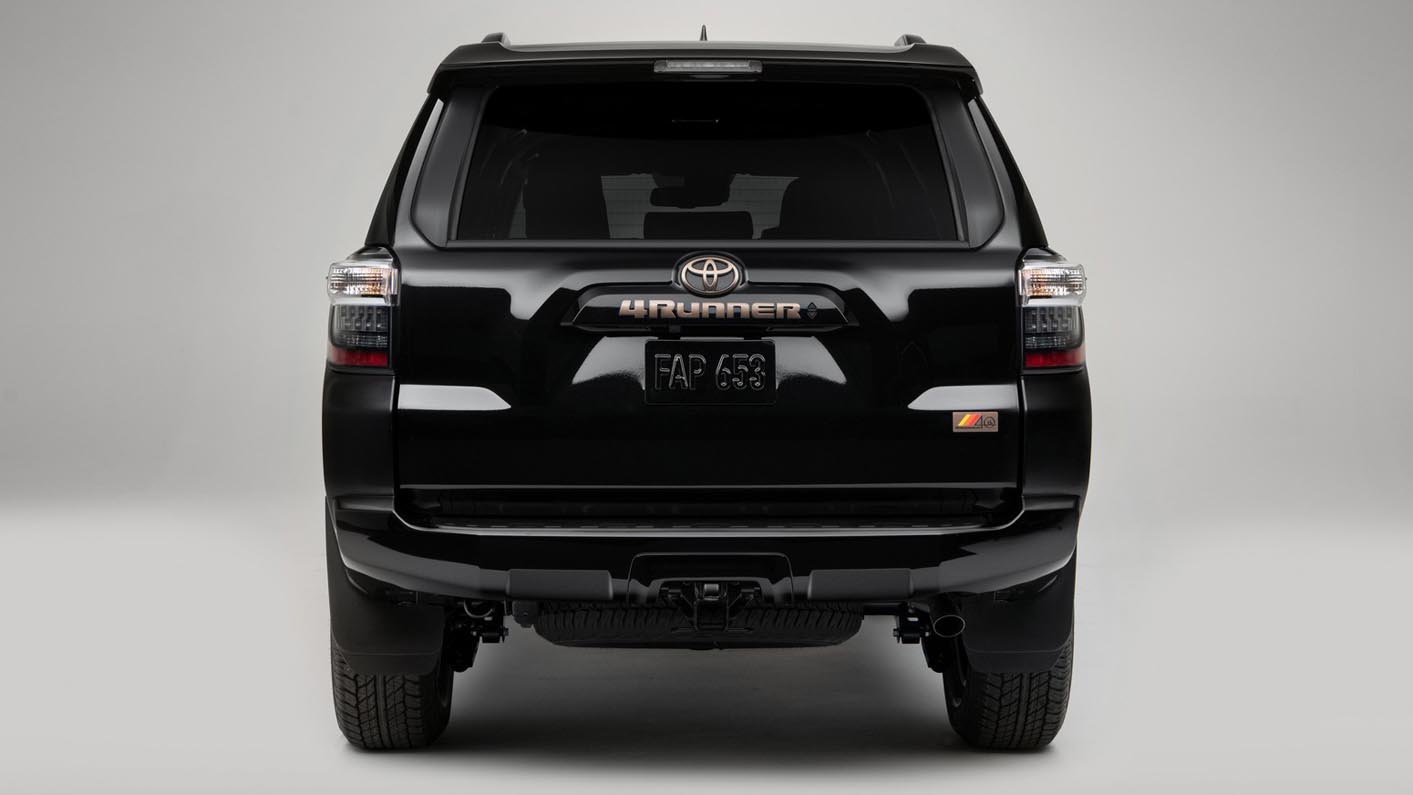 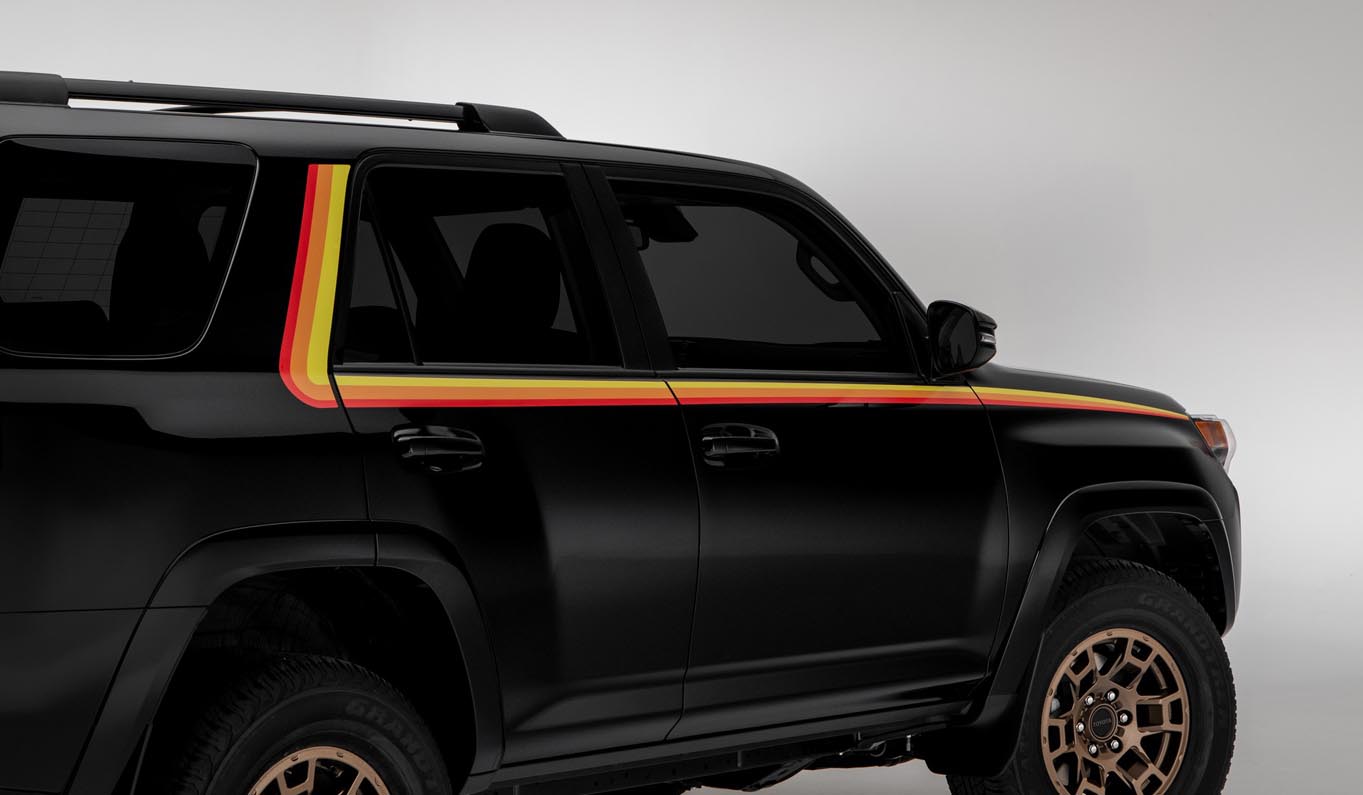 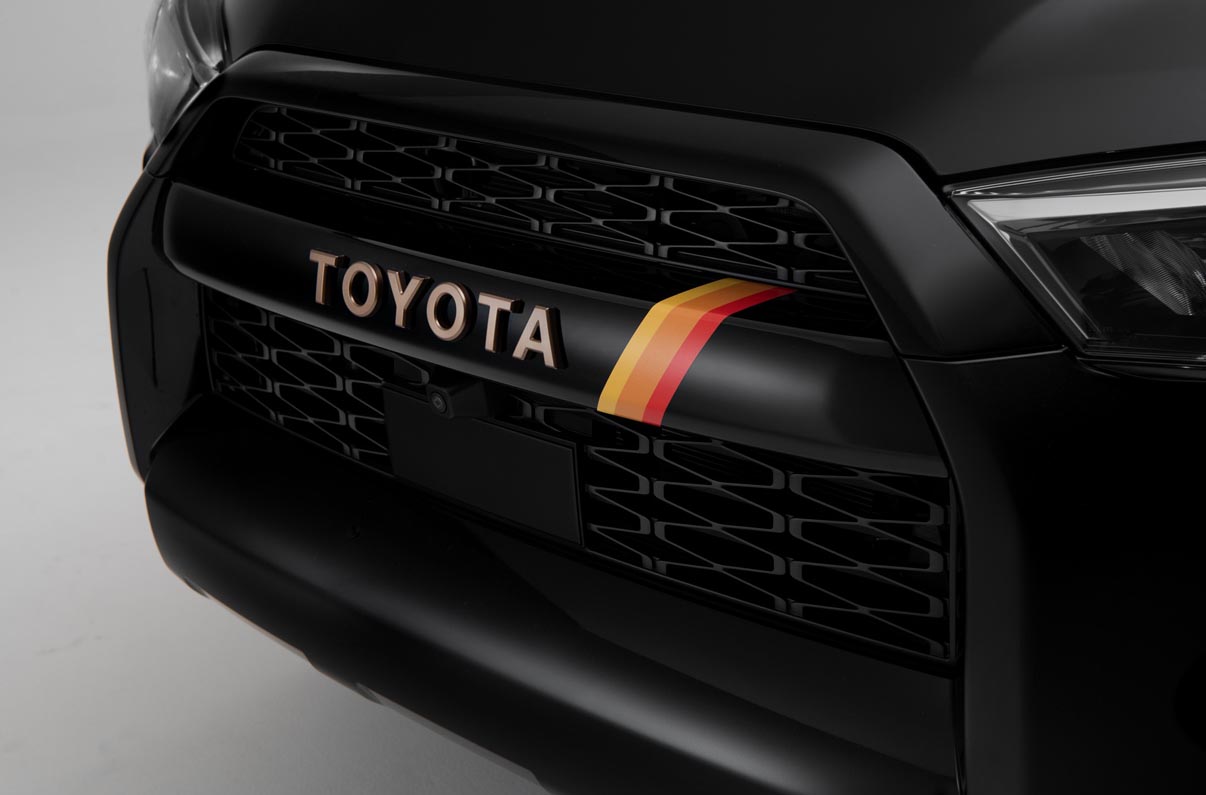 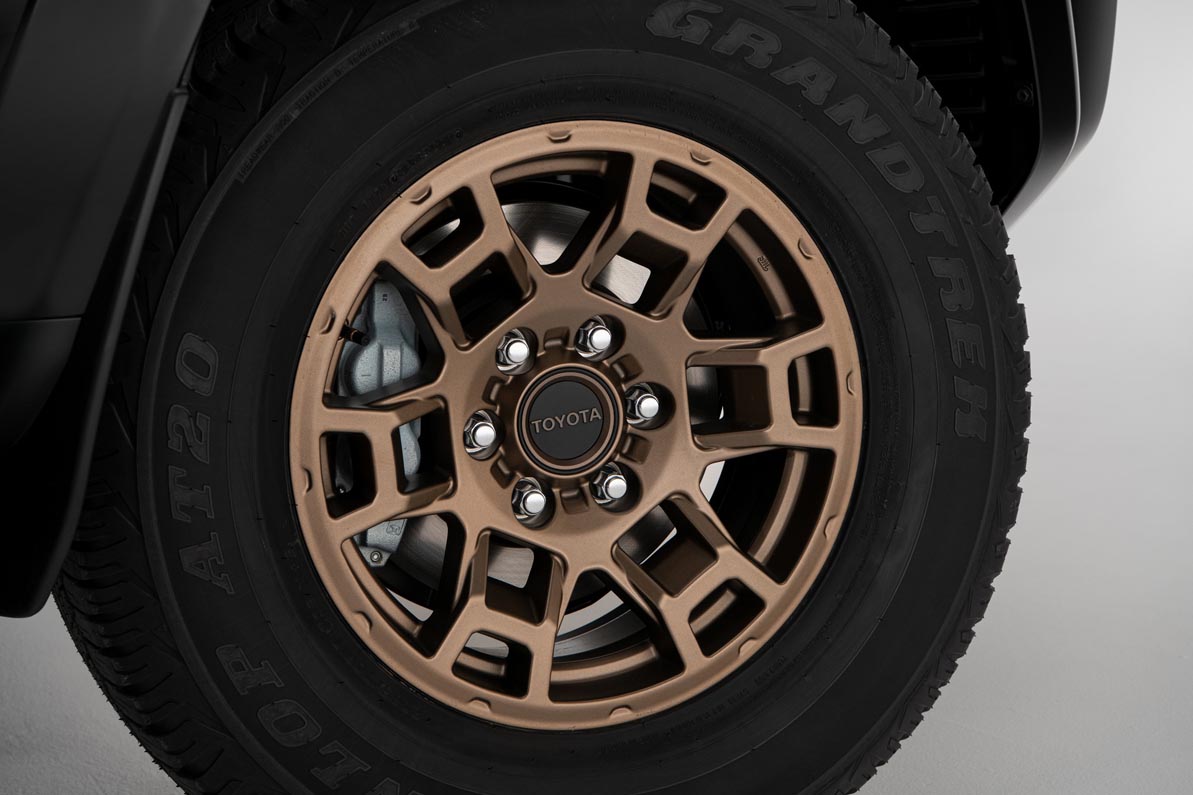 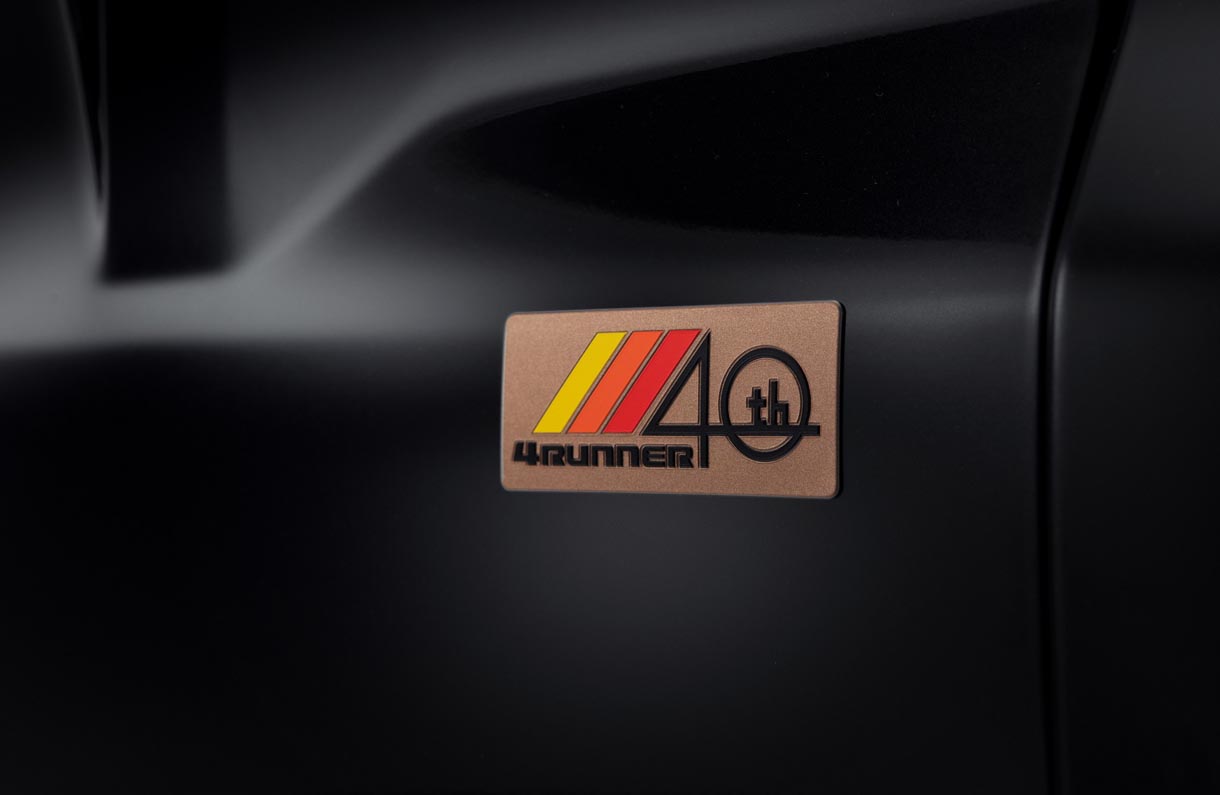 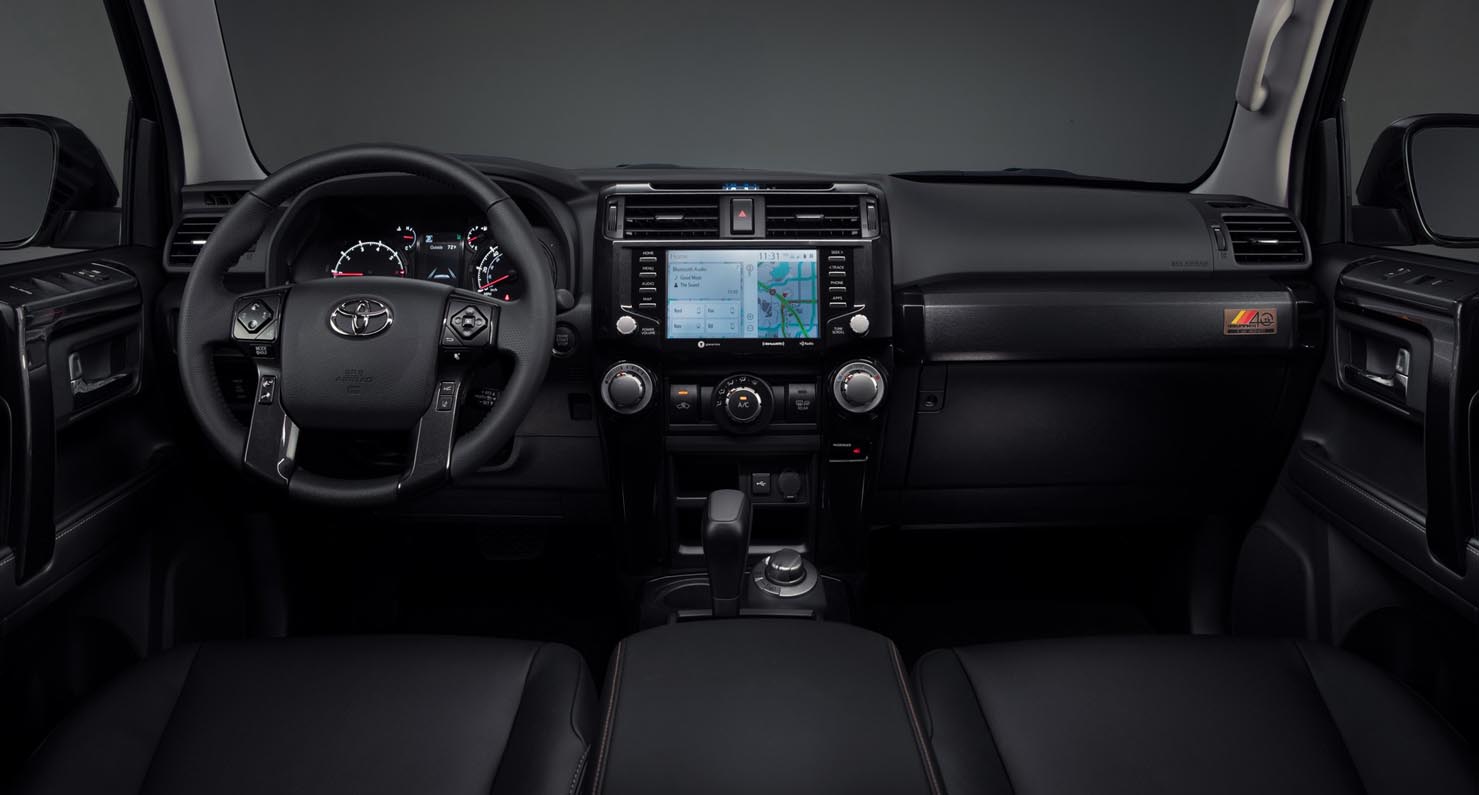 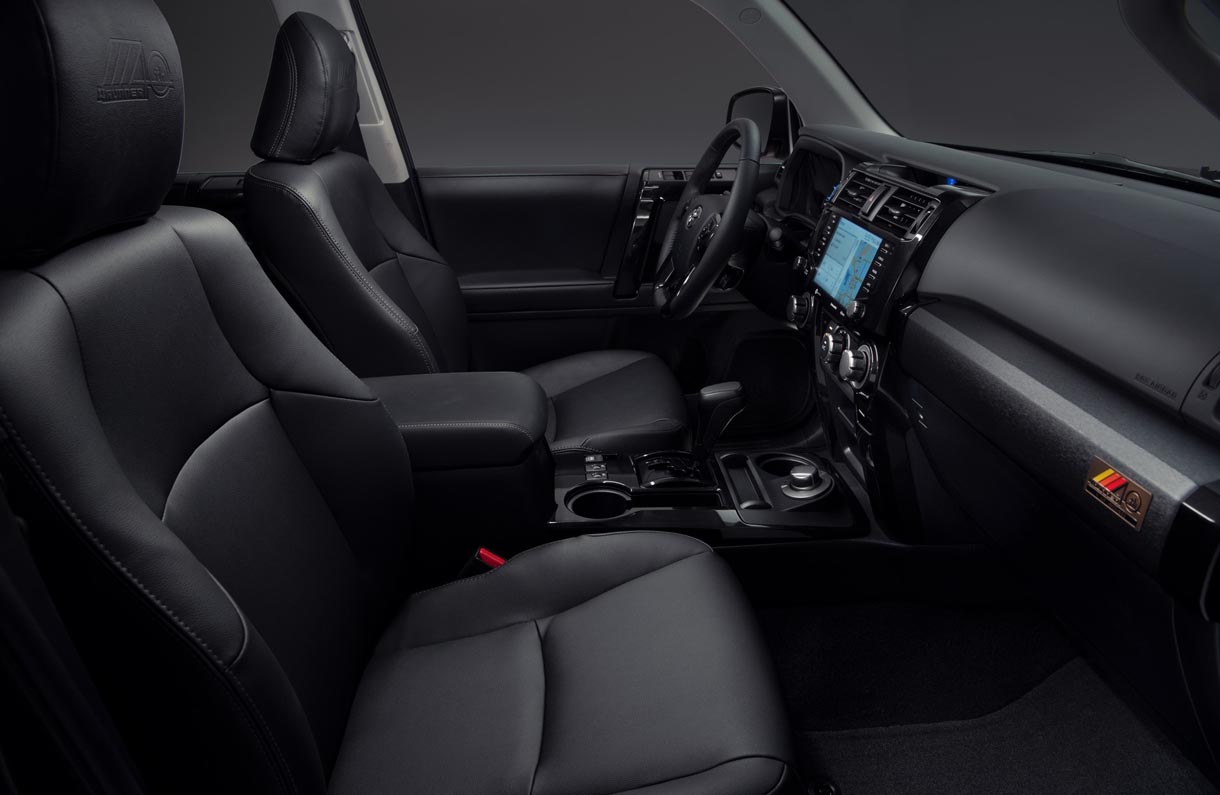 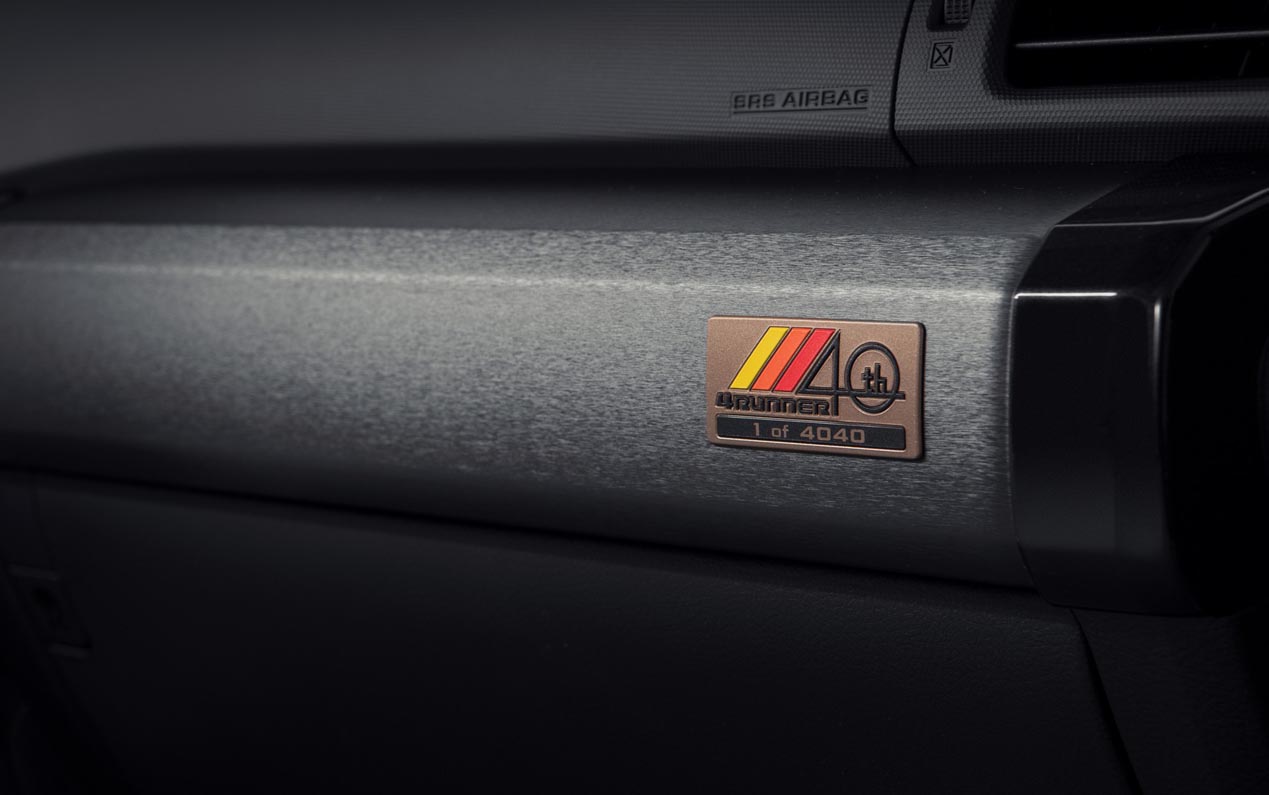 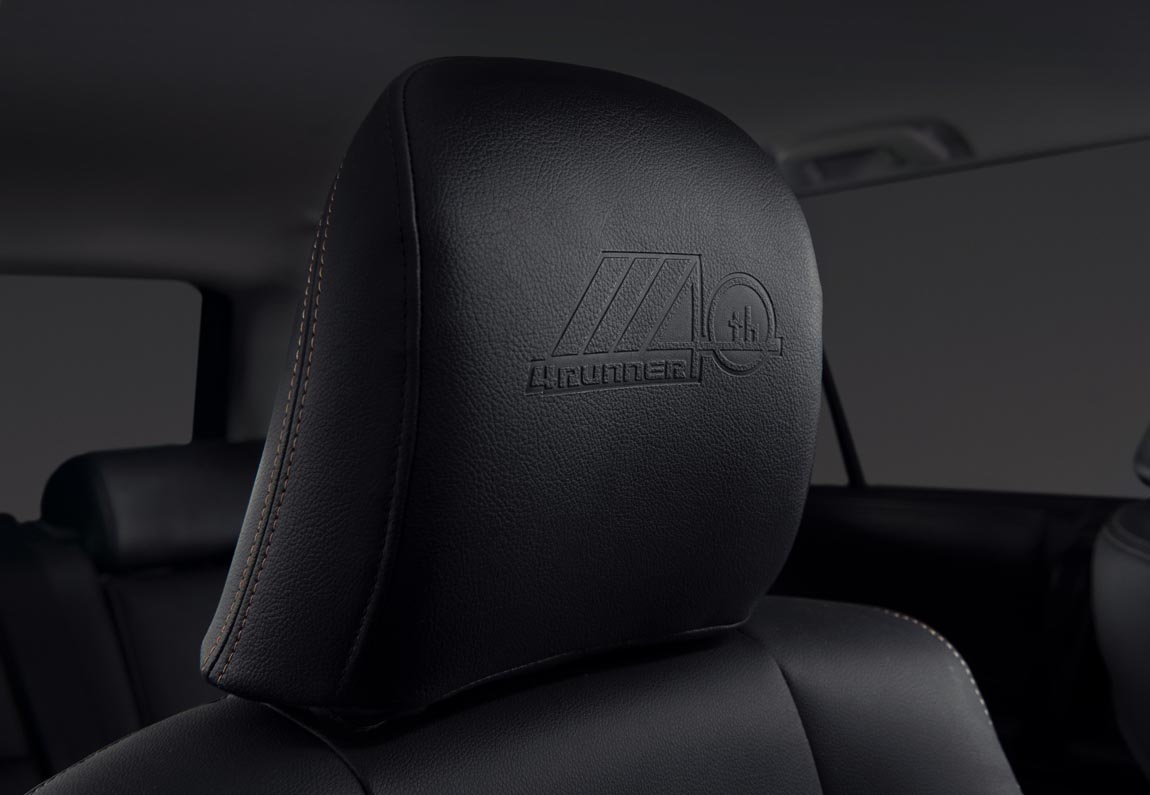 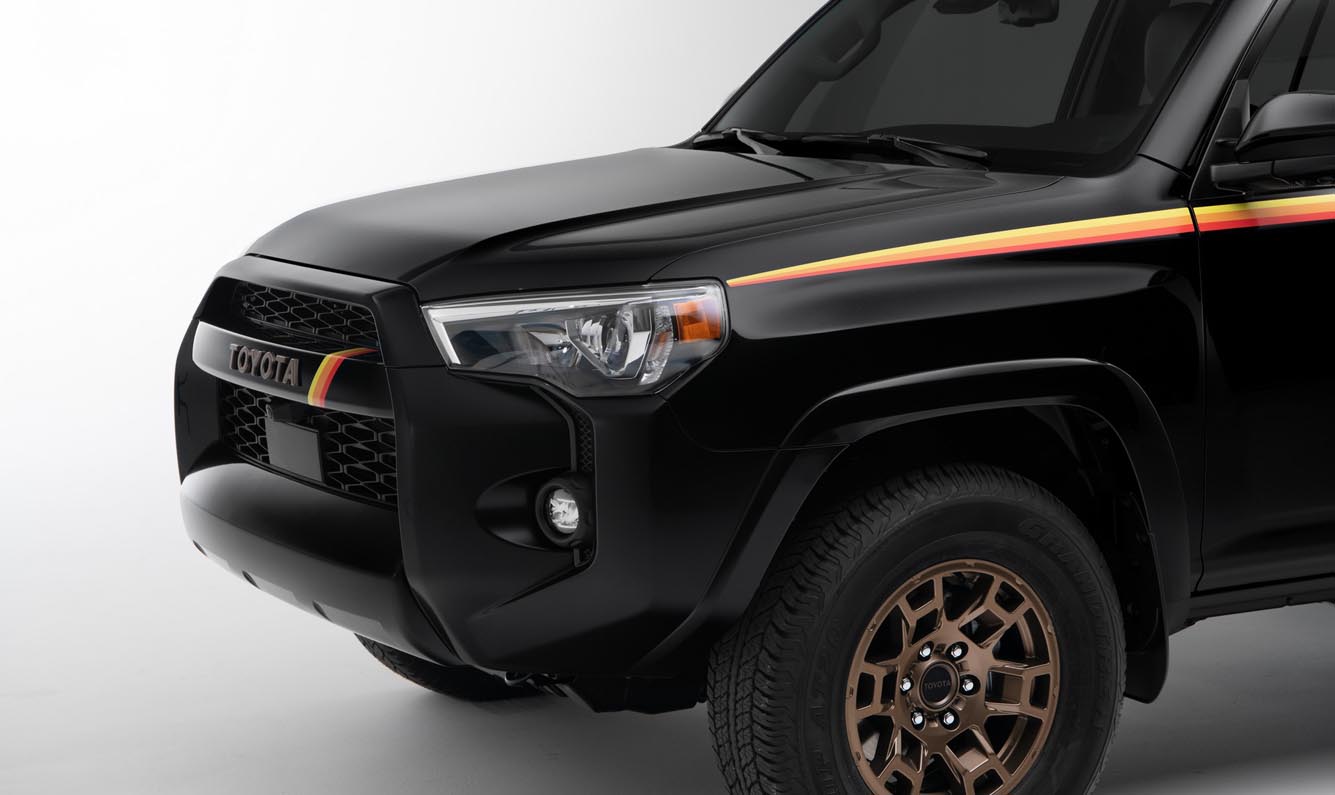